Hello, it’s me. Fall is here and I am dropping in for my bi-monthly post. No, I’ve got a few posts coming…
It has been over a month since I wrote about Hannah’s sixth birthday and we have just been trucking along, managing schedules, enjoying the change of seasons, and mostly having a whole lot of fun. There have been a few noteworthy events, too. One of which happened at the end of September.

On the 27th, Joe completed a half-Ironman – or Ironman 70.3 as it is now called – in Augusta. This is his second triathlon of that distance. {It has been a long time since the first one, and much longer since he did the full Ironman.} That same weekend he also married a couple. Thankfully that was in Augusta as well, what with the rehearsal, dinner, wedding and reception to attend. We brought the kids and Meme and spent the weekend in a hotel. While Joe and I did wedding stuff, Meme and the kids had all sorts of hotel fun. 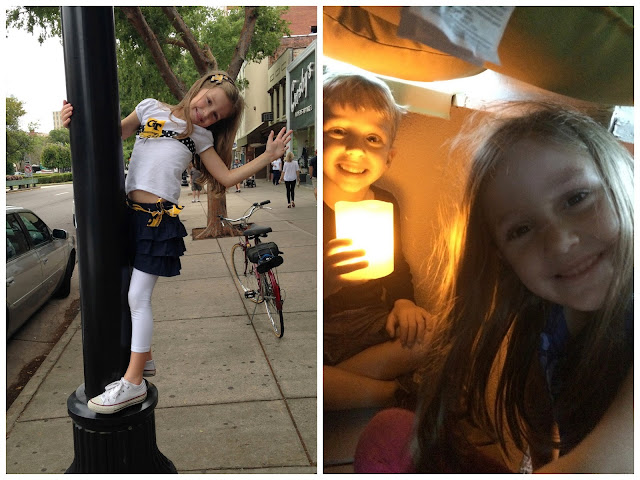 The race was Sunday. We were a little nervous about the weather. It was going to rain, then it wasn’t, and back and forth until we got a favorable weather report the day of. And then it did end up raining some, though thankfully mostly just a mist.

Hannah and Joseph were excited to cheer on Daddy. At the race expo the day before, Meme bought them “Support Crew” sweatshirts. I loved the neon. Great visibility! Daddy spotted them every time he passed by. 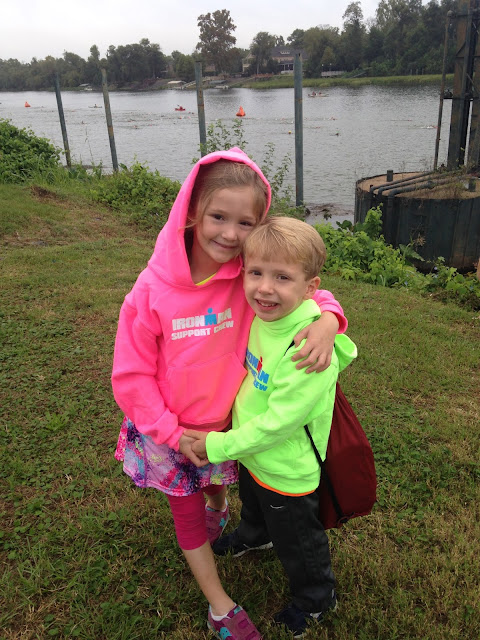 Joe left the hotel early that morning with his friend, Mitch. Since there is such a time lag between the close of transition and the swim start, we came a little later, riding the hotel shuttle bus (which delighted Joseph).

He just told me today that he was really nervous about losing his wedding ring. He usually gives it to me before the start, but I wasn’t there this time. But we saw him coming out of the water and cheered loud! These are the professional pictures below. 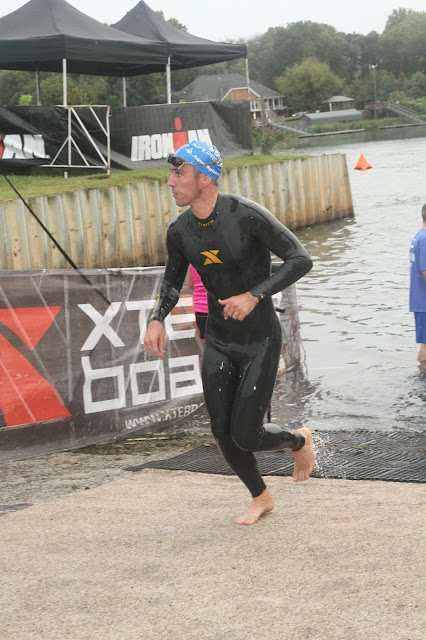 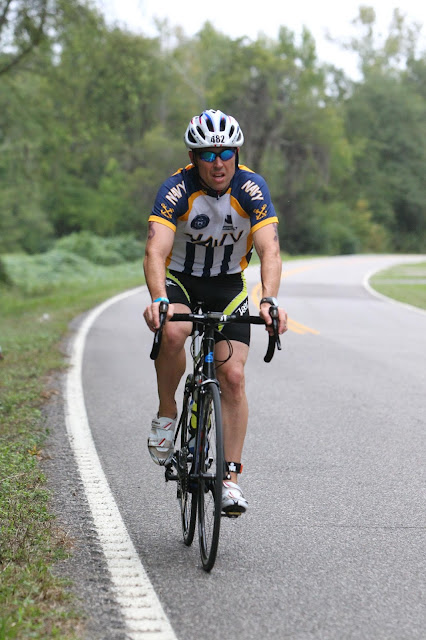 While he was on the bike, we went to a great little breakfast place and then found a good spot to watch the run. We only saw Joe on the bike at the very start, coming out of the transition area, which is normal for a race with such a long bike distance.

The bike leg was rough. Joe was in a lot of pain for most of the 56 miles. It was definitely due to the accident; his back just can’t take that position.

He said he learned two things after the race: 1, he is not doing that race distance anytime soon (if ever again), and 2, we need a third opinion. It’s not just the bike riding. It’s a quality of life thing. People often ask us how he can manage to run so much with his back being so bad. Well, he can run with no pain, yet he can’t sit (or ride a bike) for 20 minutes without pain. He would rather run for an hour than sit for an hour. Seriously.

Joseph wore his Boston Strong shirt and Hannah wore the one she got for running her first race. We do love bright colors! We brought our cowbells from the Savannah Rock-n-Roll marathon and used them with abandon. 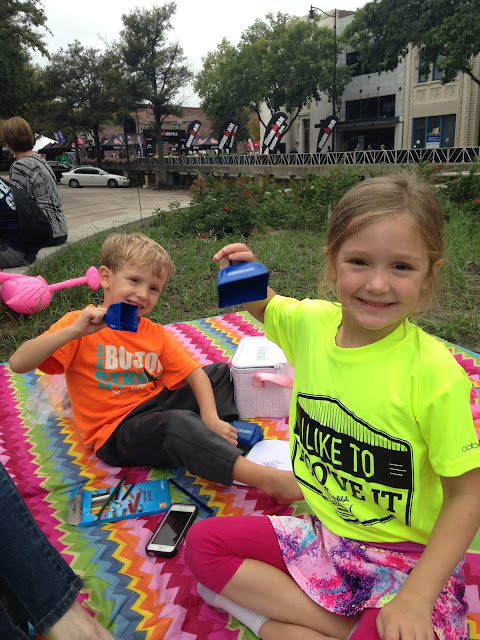 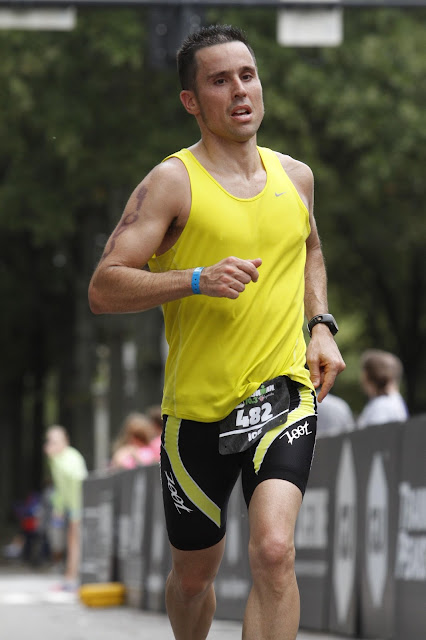 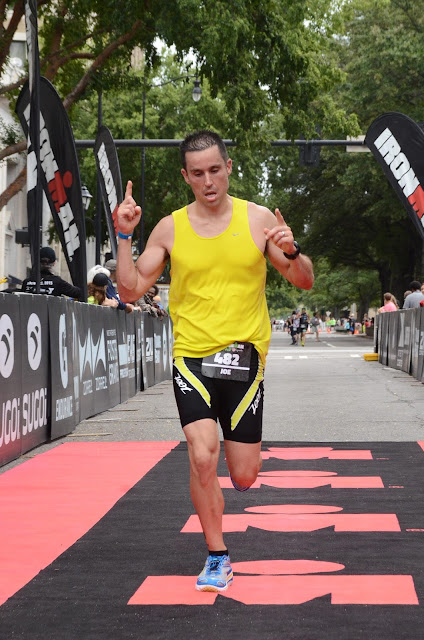 Joe had a really good run. He would probably want me to clarify the above photo. He is not saying he’s #1. He’s pointing to the Big Man upstairs who got him through the race and has enabled him to be even able to race. Praise God, indeed!
His final time was 4:56:27, accomplishing his goal of sub-5 hours. Yay!! Go, Daddy, go! 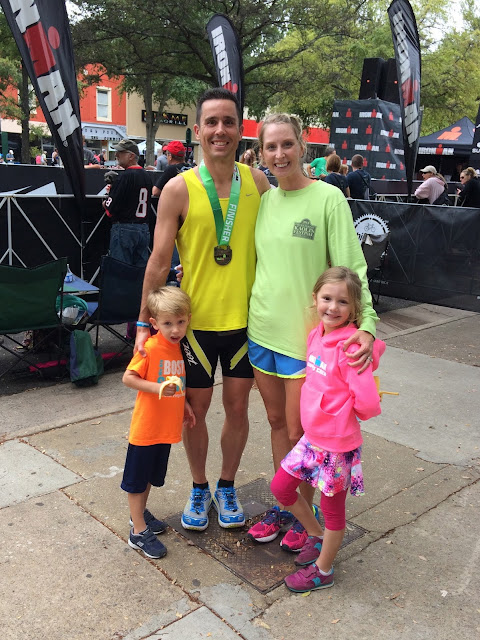 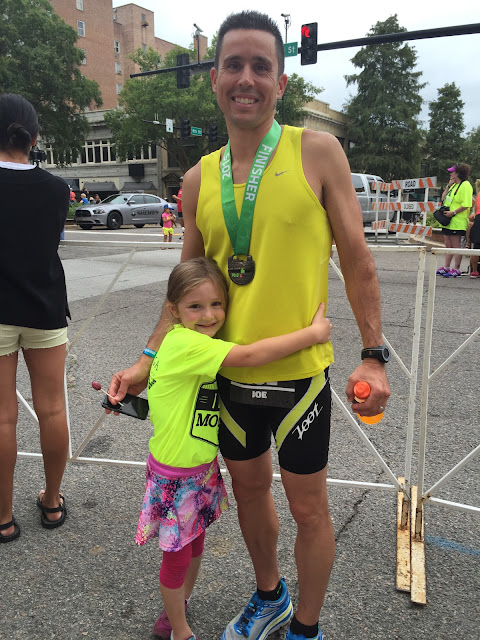 It was a super fun day!

…And, thanks to Meme, a very helpful part of Joe’s fan club.