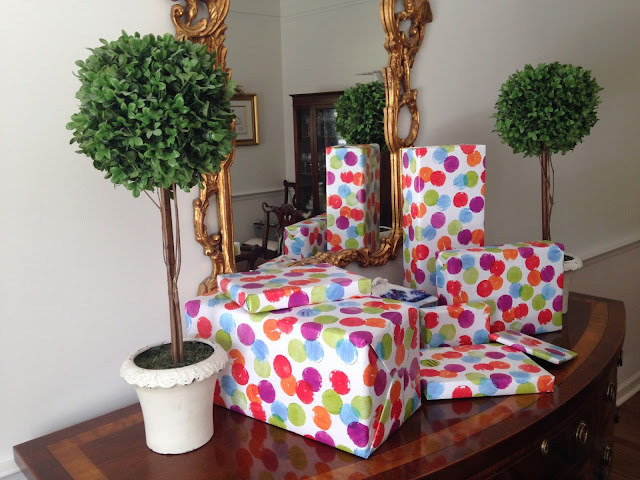 I had to make sure there were wrapped presents, as promised, when Hannah got home from school on the 8th (the day before her birthday). A few were from us and I wrapped a few from Gran Gran and Poppy and Granddaddy that were shipped here. I found this paper on my last trip to TJ Maxx. Have you ever bought their wrapping supplies? The paper is awesome! Good quality…and it’s cheap, which is always good. I love the colorful dots. Kinda screams Hannah if you ask me.

So, there they were, sitting pretty until the next day. The 9th was a Wednesday and the start of our Wednesday night church small group studies, meaning the afternoon/evening was busy. But, we packed just about everything we could into the day…

For the first time since the first day of school, the kids ate breakfast at home. Cinnamon rolls, her favorite! 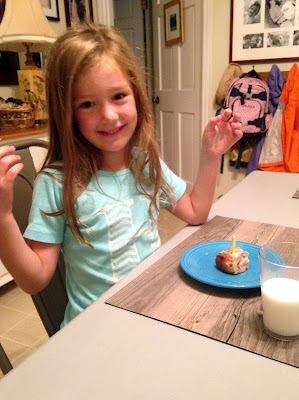 {Side story, now that she is in kindergarten, she is going straight into the cafeteria and eating breakfast in the mornings before going to her classroom at 8:00. Since I have been walking Joseph to his classroom, I walk through the cafeteria on my way out, sit with Hannah for a few minutes, and then leave. Some days, especially at first, I was sitting with her while she ate and then walking with her to the classroom. I just couldn’t bear to leave my Monkey when I’d walk in and see her eating at a table by herself. My heart would leap as I saw my little love sitting there so sweetly surrounded my no one. She insisted she liked eating alone. She’s not much of a morning person and prefers to have that time by herself (or with me). Now, the teachers overseeing breakfast have all the kids eating at the same tables, so she isn’t totally alone. Still, I can’t help myself, and at least have to go kiss her. The day when I drop them both off at the curb is coming soon enough… But anyway, I wanted her birthday breakfast to be special.}

Joe and I picked up Zaxby’s and came to the school to join her for lunch. We caught her in the hallway heading to the cafeteria, and after learning that we couldn’t eat our lunch in there (outside food is allowed in lunch boxes, but apparently bringing food in at lunchtime is not. Or maybe it’s fast food…? I don’t know.), her teacher offered the classroom to us. We grabbed Joseph on the way and had a private little family lunch.

While we waiting on Hannah’s class to return from lunch, we were entertained. 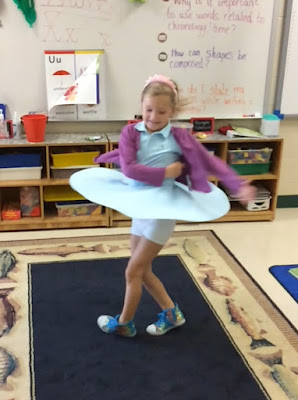 She likes this twirly Polo dress.

Soon it was time for cupcakes and Capri Suns. Mrs. May has a cute birthday routine and we got to see it all play out for the first time, as Hannah has the earliest birthday in the class. Hannah stood at the front of the room on the rug and called out 6 of her classmates (“candles”) to join her.  They formed a circle around her acting as candles on a cake, the whole room sang Happy Birthday, and then Hannah blows the “candles” out, one by one the kids falling to the ground. They had a grand old time and it was so funny. They all loved it, especially Joseph! 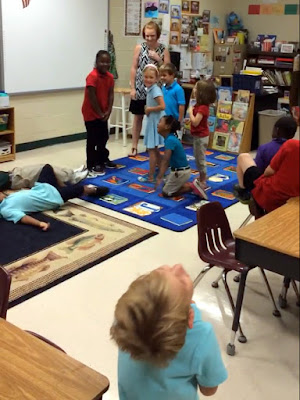 We left and I had about an hour before heading back to the school at pickup. On the drive home, I asked the birthday girl if she was interested in opening presents… 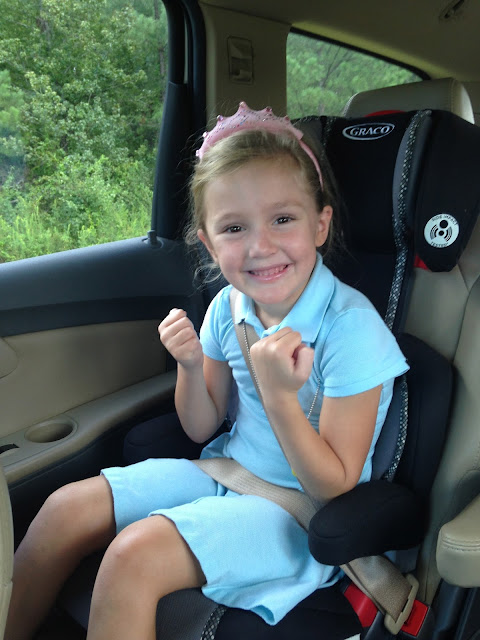 That was a YES!!! We opened a few while waiting on Daddy and Skyped with Granddaddy. 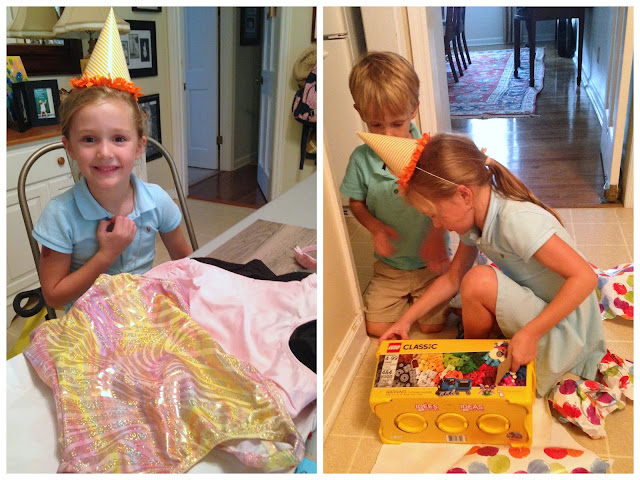 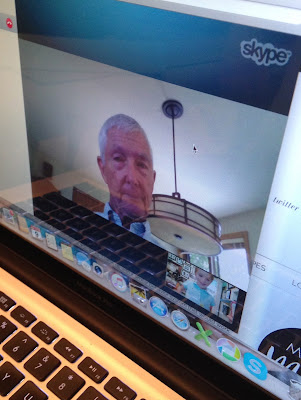 Then she opened her Elsa dress from Joseph… 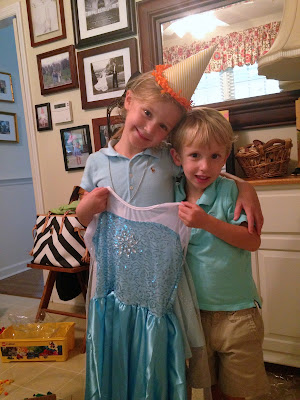 …and her American Girl “Truly Me” doll. 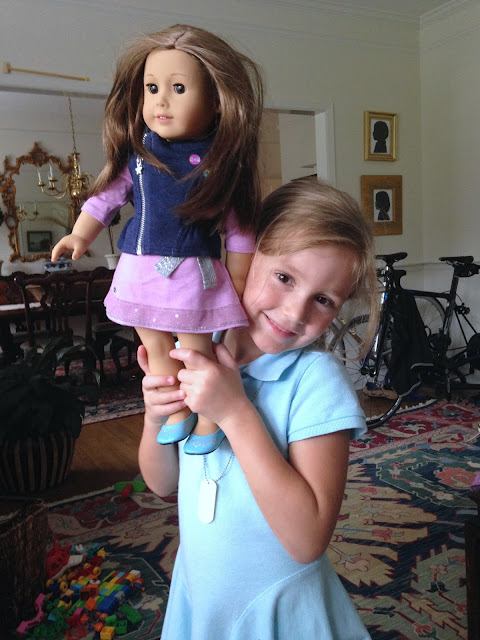 She was a bit overwhelmed. I filmed the whole thing thinking she’d flip out and she was so quiet. Just speechless. I guess she didn’t really think she’d get one. It was really cute. Love at first sight. Since the doll looks like her, she choose the name Maddalena (her first middle name). Hannah also got the lavender girl-sized dress to match.

Uncle Will Will, Aunt Crystal and Stella FaceTimed her. 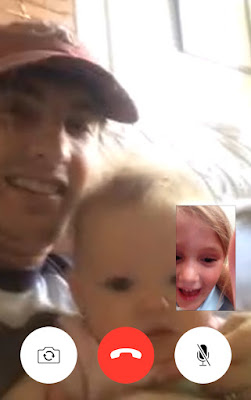 She heard from all of her grandparents, aunts and uncles, godparents and friends. She received lots of cards and a few presents in the mail, too.

Perhaps the cutest part of the whole day was her excitement in getting the grocery-store cake she requested. A month prior when we were out for a walk, talking about her birthday, she told me she wanted a Harvey’s cake. Specifically she wanted, “a yellow cake with chocolate icing, with a pink ribbon around it with a bow, and pink and blue kinda sunflowers”. Well, there are no blue flowers, and they aren’t exactly sunflowers, but the cake lady was off that week and I had to get another employee to tweak the one off the shelf for me. I guess it was just fine; Hannah was ecstatic when she saw it that afternoon! {During the same conversation when I was trying to get her to tell me what all she might like for her birthday, her answers were “American Girl doll, Lego stuff, and an Elsa dress.”}

After church, we came home and had a little party. 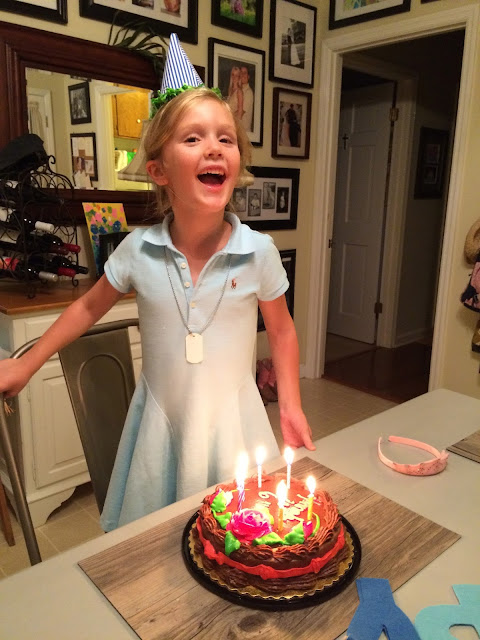 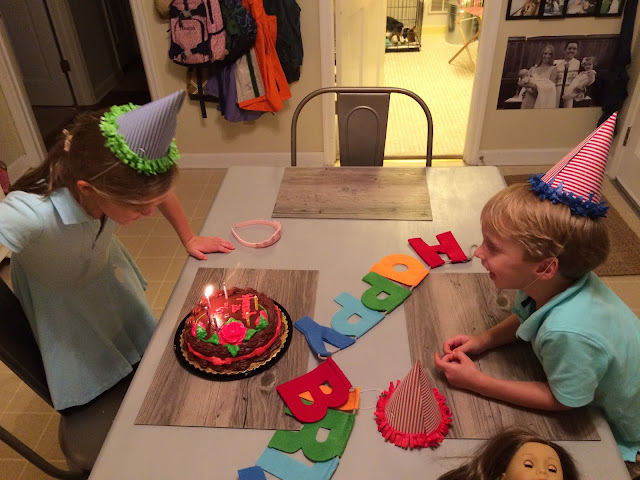 The kids got a kick out of the unintentional trick candles we put on the cake. I didn’t know we had trick candles, but a couple of them kept lighting back up. She and Joseph thought it was hilarious.

The next day, Thursday, Maddalena was ready to greet Hannah when she got home from school. 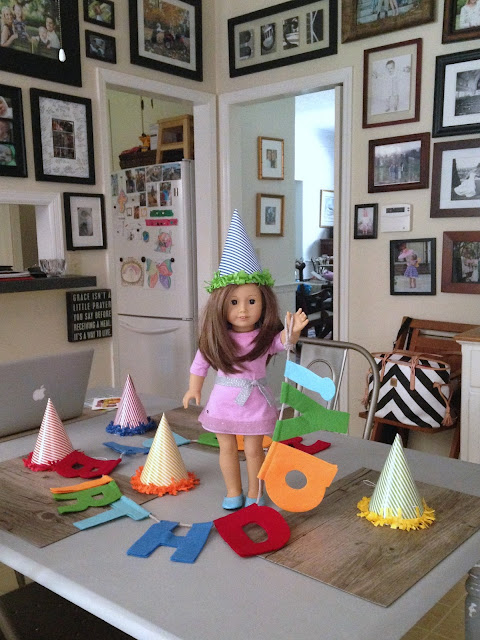 That night, Joe and I (and Meme on FaceTime) told her we were leaving after school the next day for a birthday surprise trip to Atlanta. We hit the road shortly after 3, dropping Chloe and Mollie off to board with Mrs. Ice, the lady that loves our dogs as much as we do.

We got to the restaurant, Benihana, and Hannah changed into her selected outfit. The custom-made Fancy Nancy Dress from her 4th birthday. It was a little short, but I didn’t want to say no. She loves how it twirls… 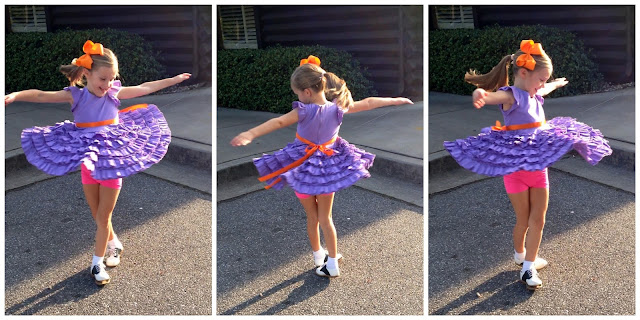 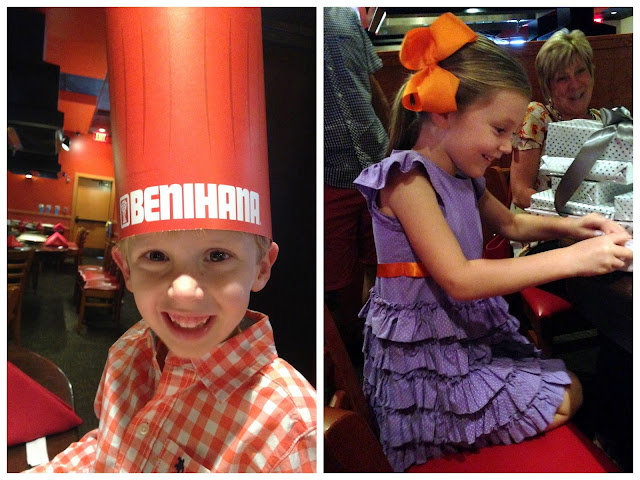 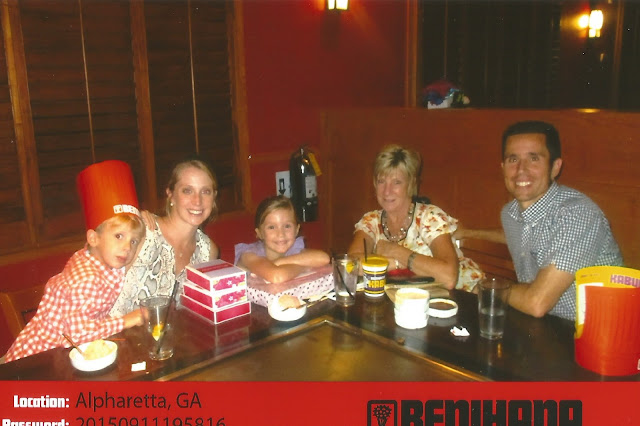 Dinner was fun and yummy. Both kids love restaurants where they “cook on the table” and tend to eat really good, too. Hannah opened some presents from Meme, including her pearl necklace with 6 new pearls added, and outfits for her doll (an Elsa and an Anna costume!!). She also opened a doll carrier from Uncle Will Will and Aunt Crystal and a gift card from Aunt Sarah and Aunt Betsy. She was over-the-moon and we hadn’t even gotten to the main purpose of our trip: the American Girl STORE.

Saturday morning started with breakfast at the hotel. The boys dropped the girls off at the store just after opening at 9:00. It was perfect. My mom had scheduled appointments for two of my old American Girl dolls to have their hair redone at the Salon. Samantha also got her ears pierced!

Hannah pretty much had the whole store to herself for a good 30-45 minutes. She didn’t stop, moving around the store – going this way and that – taking it all in. The experience is overwhelming if you’ve never been (and maybe even if you have!), so having that time was very nice. 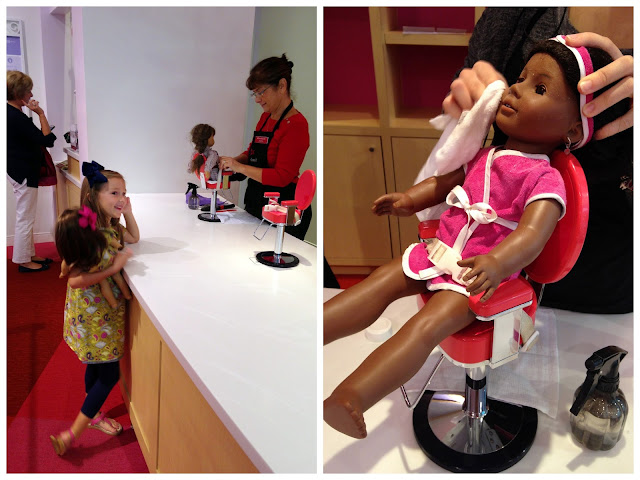 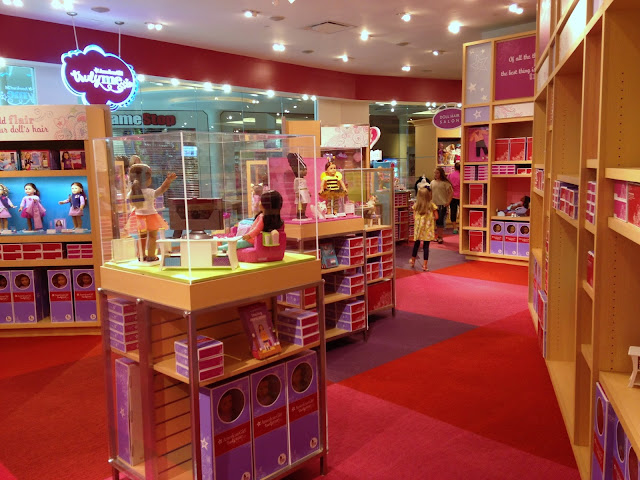 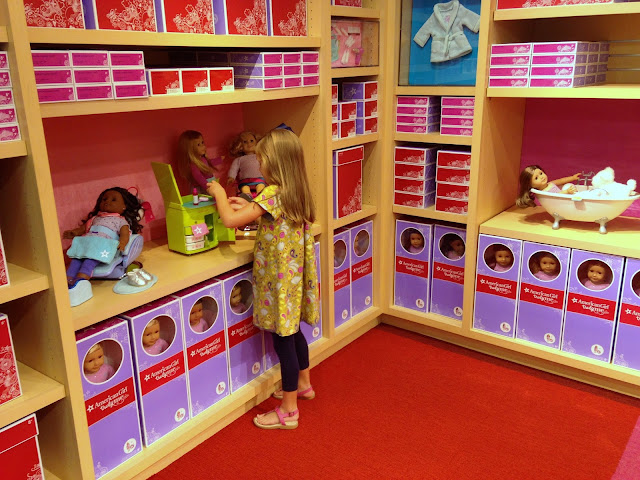 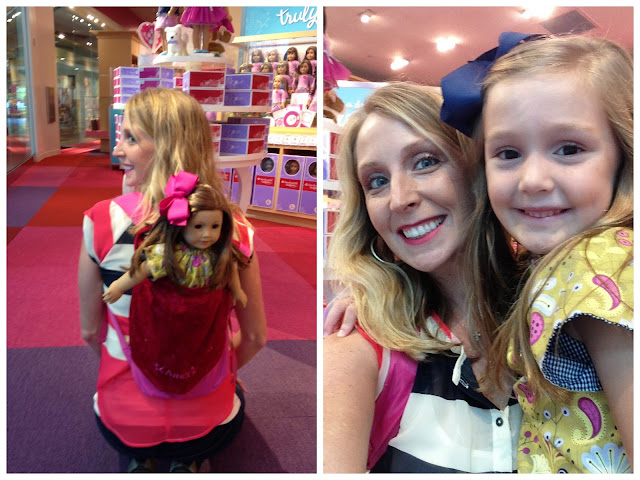 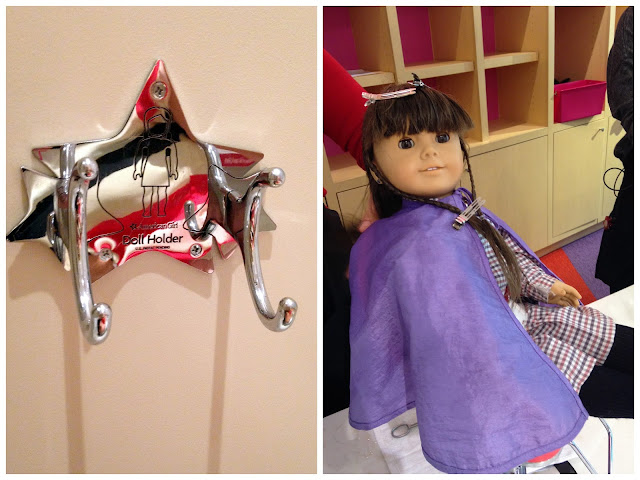 Let me add how impressed I was with the doll holders in the bathroom stalls…and with how good of a job the girls who work in the doll salon do. The girl that was working on Addy, was younger than my doll. My mom and I figured out that those dolls were almost 30 years old. (The company started in 1986. I think I got my first doll, Samantha, in ’88.) They cleaned the dolls’ skin and brushed and trimmed their hair. I’m telling you, they looked good as new!

Some of Hannah’s fans arranged for her to have a personal shopper at 10:00. She came bearing gifts: a puppy from Uncle Ben and Aunt Katie, a mini AG Addy doll, and a gift card to spend. 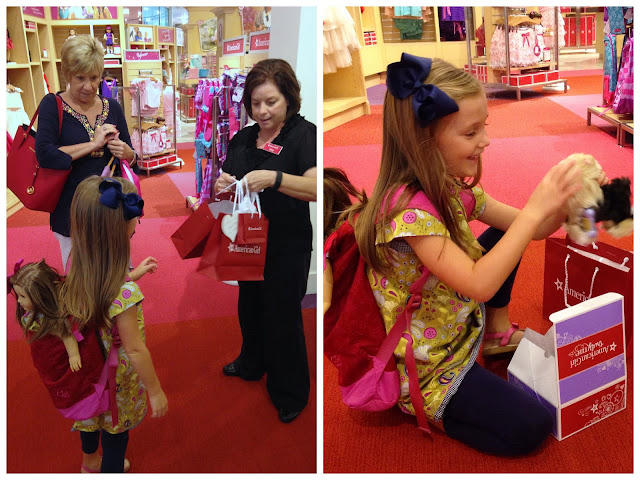 They were all over the store deciding what to get and trying on girl-sized clothes in the dressing room. Daddy and Joseph came to join in on the chaos and, at 11:15, we celebrated with a birthday party at the Bistro (reservations highly recommended). 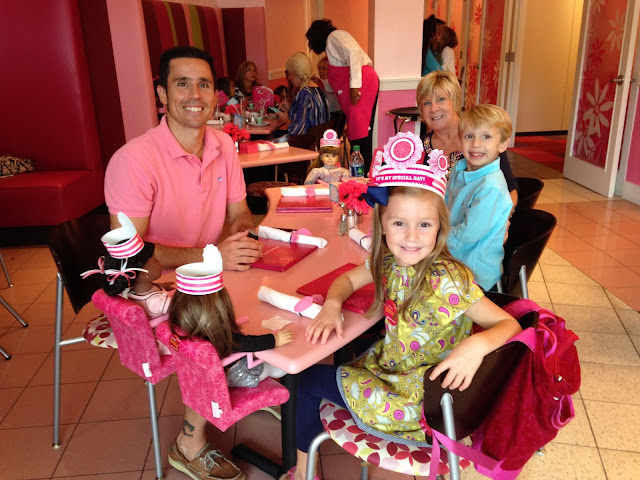 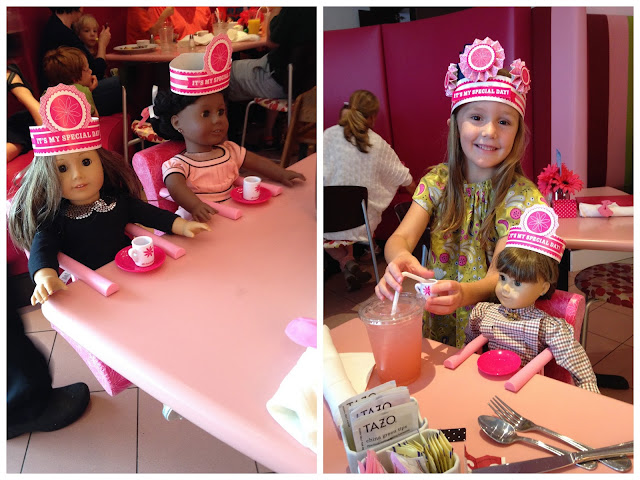 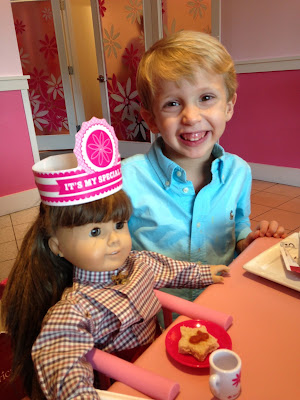 It was so much fun and the food was surprisingly great! They had seats for the dolls to sit in, party crowns, and favors. The cake was delicious and generously sized. After singing to her, the waitress brought us slices and had the rest boxed up and ready to take home. 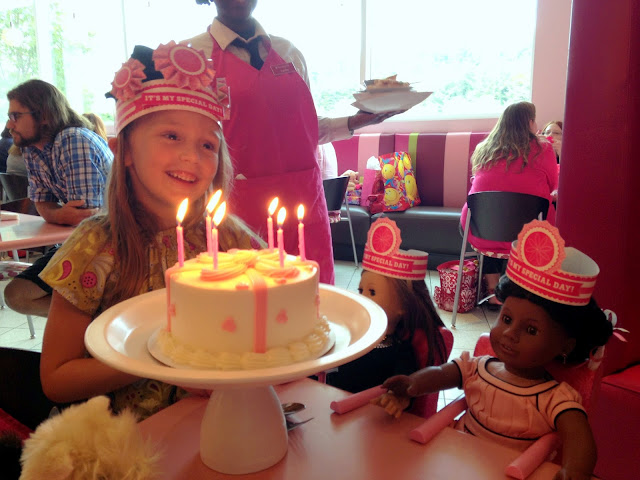 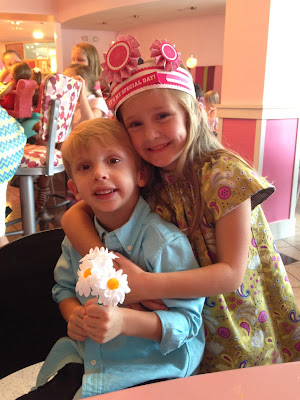 We left with lots of bags (and some Christmas presents hiding in the mix) and drove back to Sandersville where Joe and I had a wedding and an engagement party to attend. It was a busy, busy day but a very exciting and truly memorable birthday for our 6-year-old. 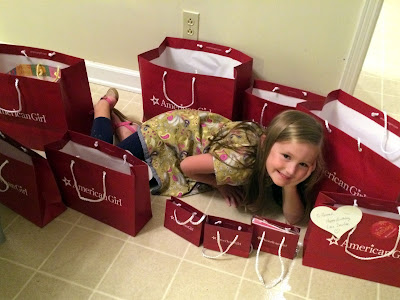 Oh Monkey, how we love you so so much and had the best time celebrating your birthday American Girl-style. We thank God for you every day and pray His blessings on you throughout the year ahead. I think it’ll be the best year yet!

« catching up (including baptisms and braves game)
ironman 70.3 »