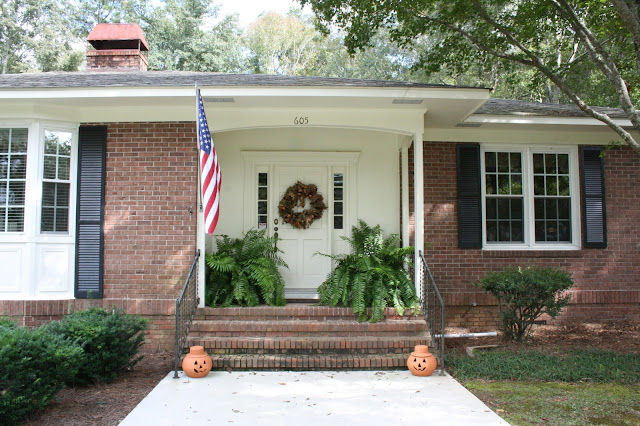 Now that October is more than half-way over (how can this be?), I’ll follow up that last post with more fall fun.

The kids have spent countless hours in the backyard. Joe is training for the NYC marathon coming up real soon. We have attended high school football games both at Washington County and Brentwood (homecoming). I decorated for Halloween/fall, and the kids painted pumpkins. 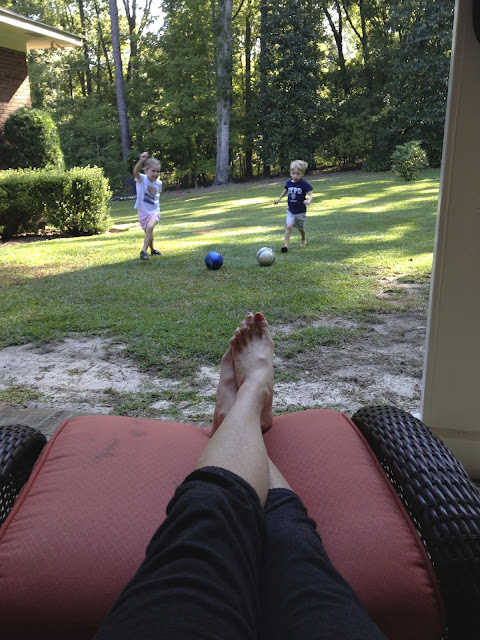 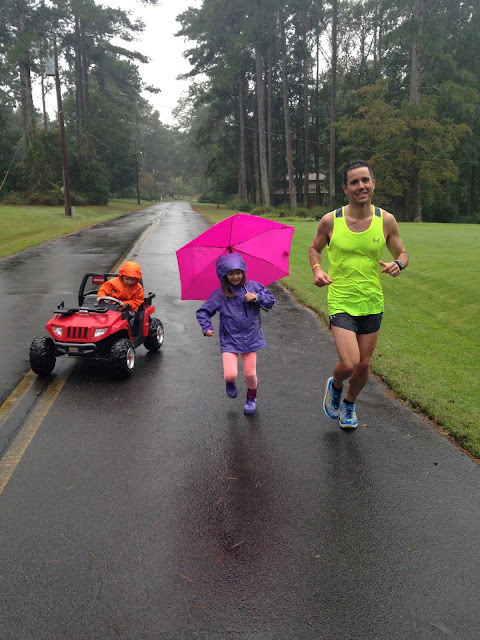 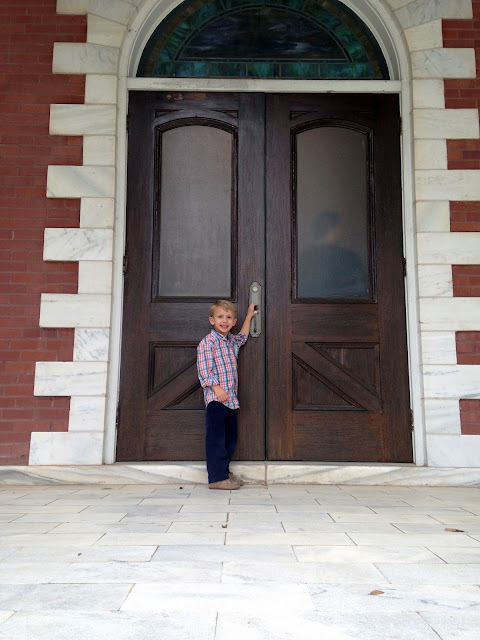 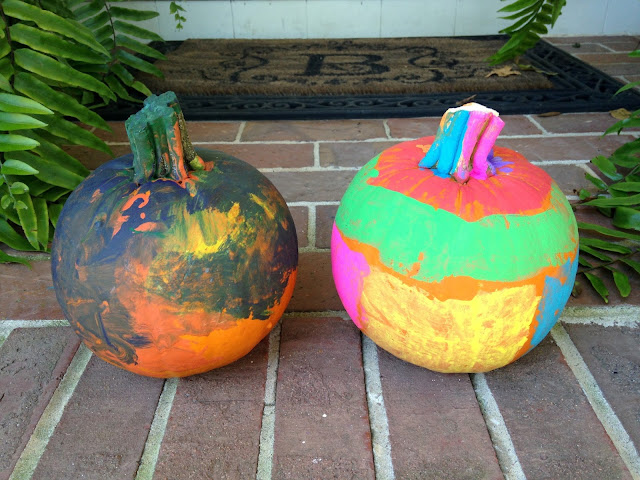 I’m sure you can figure out who painted which.
In other news…

Joseph went on his first pre-K field trip and learned all about emergency vehicles. He did NOT like the loud sirens, but everything else was super cool. 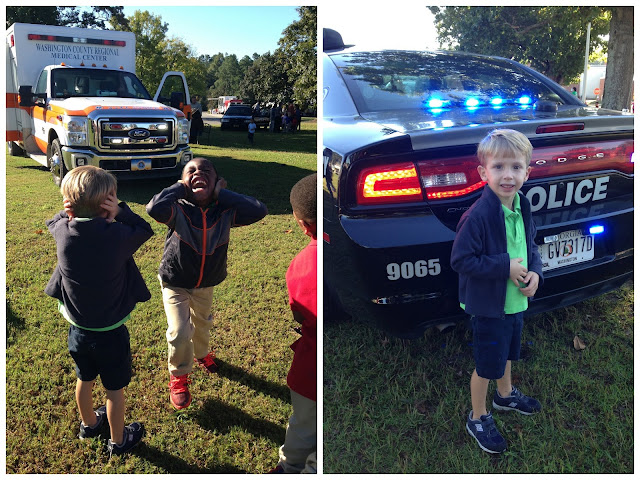 Week before last, Joe and I attended Catalyst Atlanta, a Christian leadership conference, and it was AWESOME as always. This year’s theme was “Awaken the Wonder” and was all about awakening God’s people to live in awe of who HE is and what He is doing all around us. We heard amazing speakers such as Christine Caine, Brene Brown, Andy Stanley, Louie Giglio, Jeremy Cowart (very inspiring photographer), and Margaret Feinberg. The music was so, so good as always. David Crowder led worship Thursday night and let me just say…wow. The whole Catalyst experience. Wow.

Sandersville’s main event, the Kaolin Festival, was the day after we returned home. The weather had been terrible, and it looked like the parade might be cancelled. But just before the start time, the rain stopped and the sun even came out for a while. Joe had a long training run scheduled that morning that he was working in around the rain, so I loaded the wagon and the kids into the car and set out for downtown.

It’s a short parade, but we knew lots of people in it and Hannah and Joseph had fun. 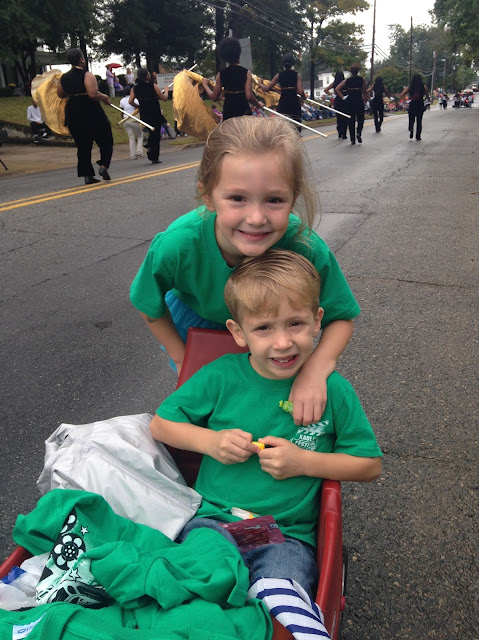 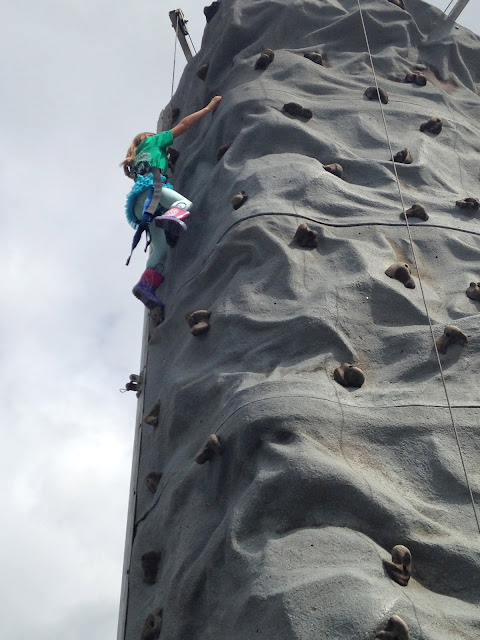 Following the long, Columbus Day weekend, we had more fun planned. Joe and I took the kids out of school a little early that Tuesday and drove to Perry for the Georgia National Fair. We had a blast! After we bought arm bands and toured through the fair, we watched the 4:00 show at the circus. I did not know until the day before that there was a circus even there. It was a bonus, and well worth the 1-hr spent there. The kids especially loved the acrobats. 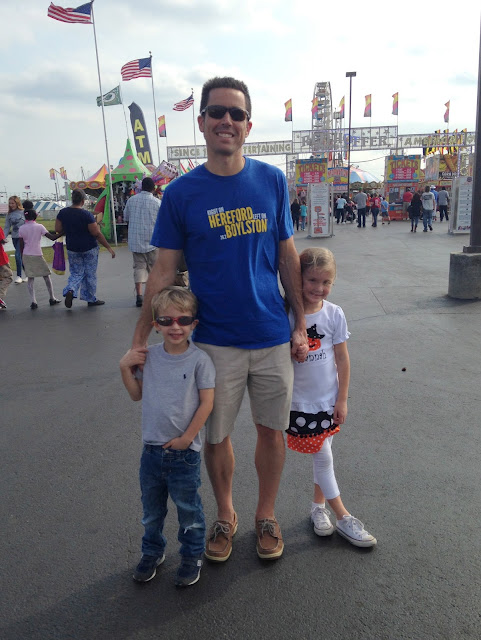 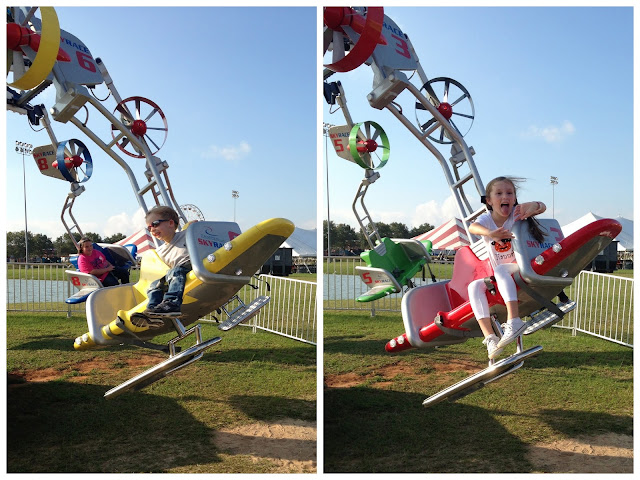 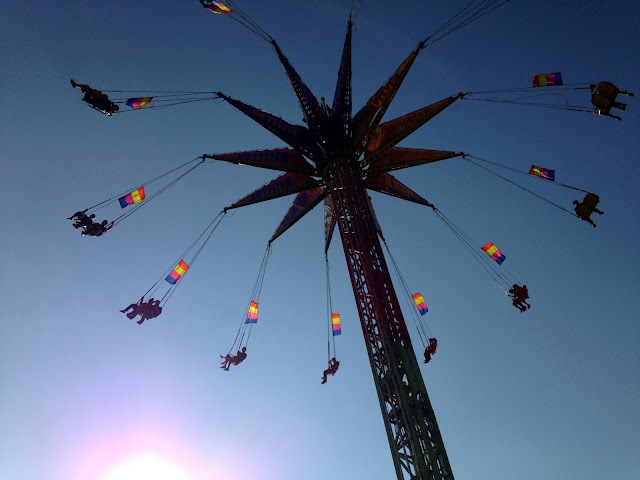 The lines weren’t bad at all as we had hoped when planning to go on a school-day afternoon. We got to ride a bunch of the rides, both kids tall enough to do anything they wanted to do. Like last year, Hannah was the fearless one wanting to ride everything. That’s her and Joe at about 7:00 in the picture above.

Joseph was thrilled to be the driver in the bumper car. 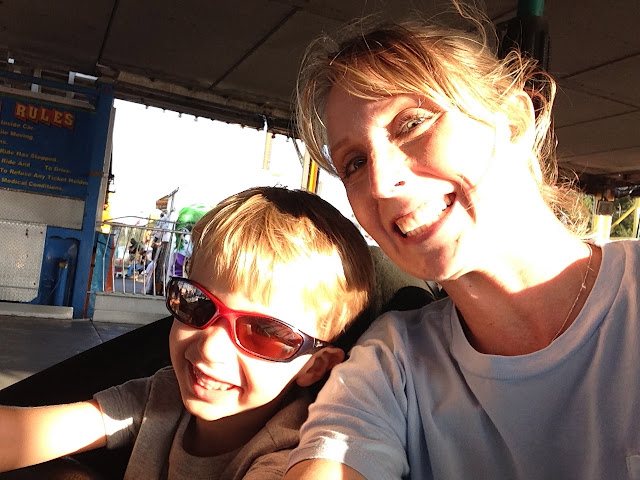 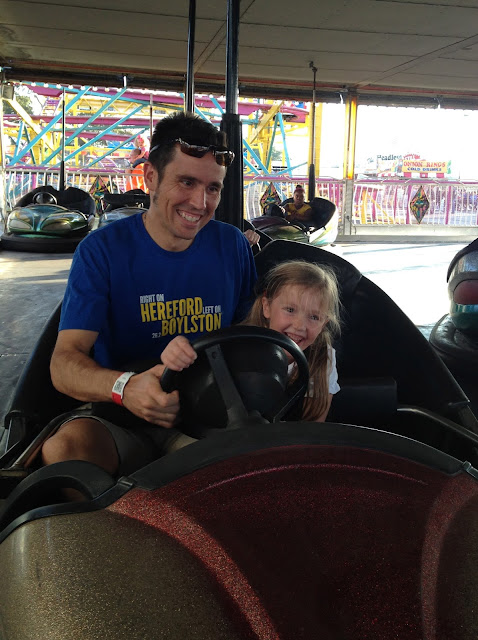 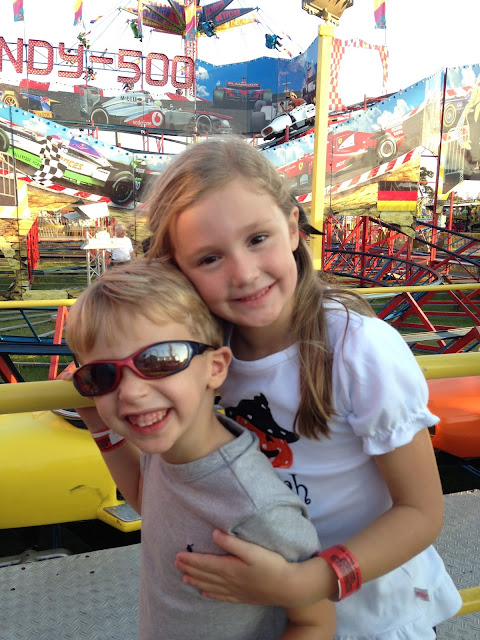 We rode a couple of roller coasters, to Hannah’s delight. Not so much to Joseph’s. He would want to ride, agree to get in and buckled up, and soon after taking off regret his decision. He would have this look of uncertainty, followed by a panicked what-is-going-on look, on his face. I think it was the herky-jerky motions more than anything.

Robinson’s Racing Pigs were a must and we did that following a break for dinner: turkey leg and roasted corn for me and the kids, corndog for Joe, and fries for us all. It’s entertaining watching those pigs run around the track and swim in the race.

Before we left, we took a ride on the huge ferris wheel. This was the most exciting part of the night for Joseph. He sat real close to me, but thoroughly enjoyed himself as we circled around and around, admiring all the pretty lights throughout the fairground. Joe had to hold onto Hannah as she apparently wasn’t afraid of the terrifying heights and kept trying to lean over the side to see farther. 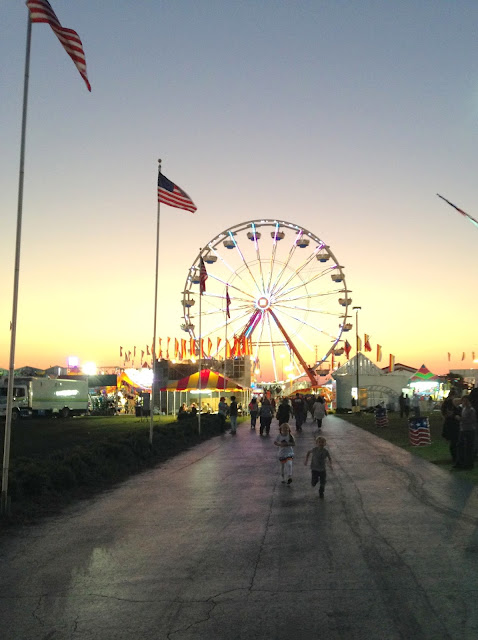 After hunting down some fried Oreos, we headed home. Exhausted but with exciting memories dancing in our heads.

My honey and I celebrated our ninth anniversary on the 14th. That day in Savannah was one of the prettiest I can remember, and we had almost identical weather here in Sandersville this year. Perfect temperature, blue sky, a true fall day in Georgia. It was just a typical Wednesday with work, school, and supper and small groups at the church. That night once we got home and kids were bathed, we lit our anniversary candle and waltzed to Moon River, our first-dance song (prompted by Hannah). Joseph took pictures while we danced. 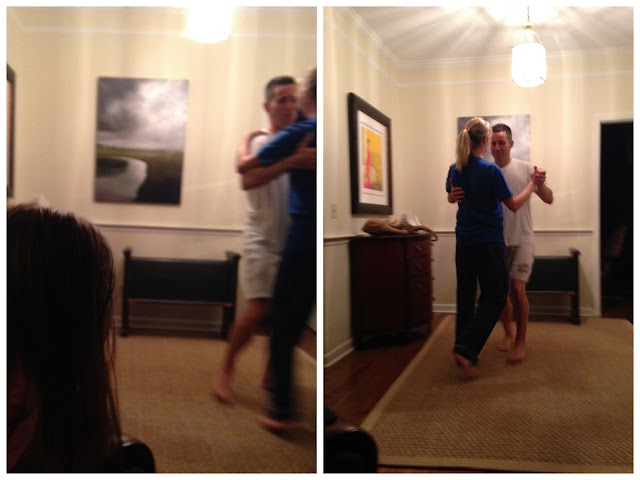 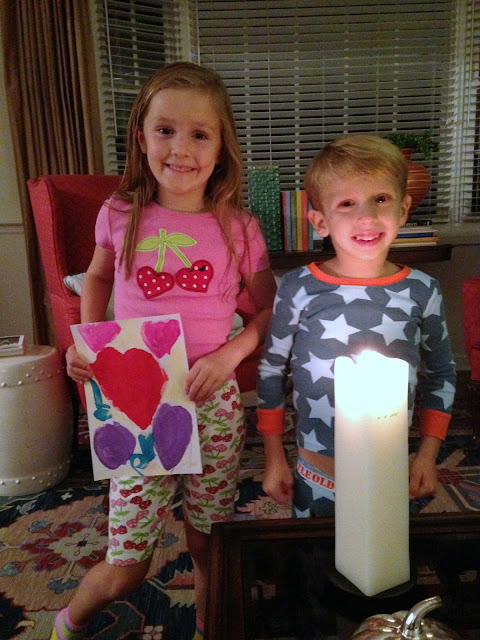 My college dog and sweet Yorkie, Chloe, turned 14 yesterday (10/21). The kids had a great time over the weekend building a fort “for her” in their little clubhouse. I’m not sure how much she enjoyed it, especially when Hannah sent her sliding down the slide, but she cooperated and was loved on a whole lot! 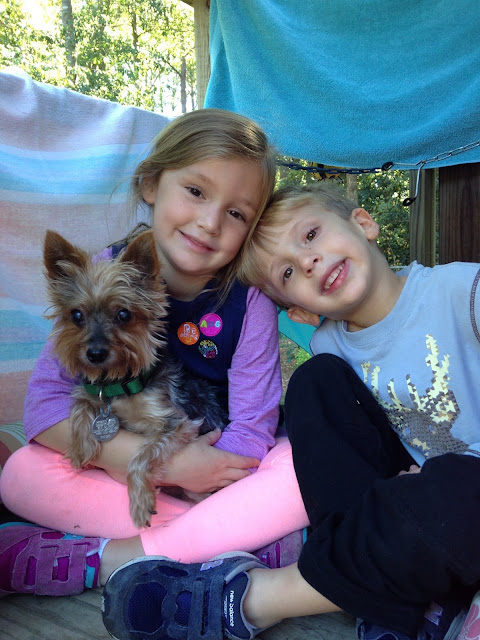 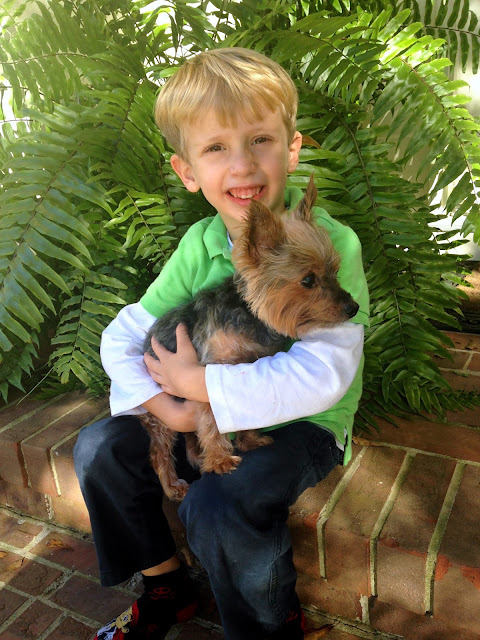 And that’s a wrap! Before I go, I will include these selfies (I am not a seasoned selfie-person, but will take one occasionally.) I was taken aback and felt a little weird when my smart little laptop synced with my phone and organized these in my computer under the category “selfie”. I mean, really? 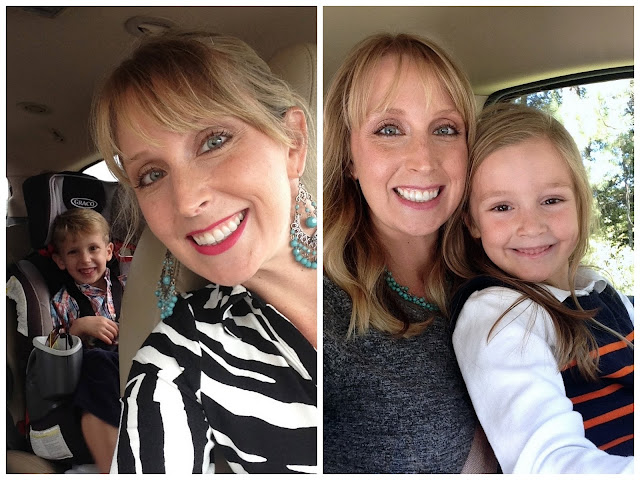 Left: Joseph and I waiting on Daddy and Hannah after church.
Right: One Sunday later, in the driveway with Hannah behind the wheel!

…As of about a month ago, I have bangs. Quite a change and I’m still figuring them out…but I like them!