That’s a Doc McStuffins reference, in case you are in the dark. It’s a Disney Junior show that’s a fan favorite in this house. Mom and Dad approve.

This kid has spent a lot of time at the doctor recently. 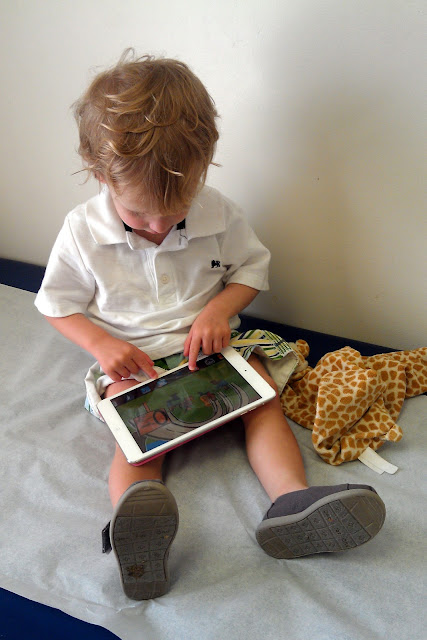 {Playing on the iPad.}

Actually, our whole family has spent a lot of time at the doctor recently…

Before we went on our trip to New Orleans, Joseph was on antibiotics for an ear infection. When we got back, we went back to the doctor because of a fever and excessive fussiness and learned that the ear infection did not go away. In fact, it was also starting up in his other ear. He had a nasty-looking throat as well. We were given a prescription for Augmentin. Let it be known that my little boy will not take Augmentin, in any way or form. I had the pharmacist add a bitter-suppressant. Joe made a chocolate syrup to mix it with. We tried diluting it in a full cup of warm milk (his favorite). Nope. He either spits it out, chokes on it because he’s upset, or – if you manage to get any down – gag it back up. Yep, it is really that miserable of an undertaking. So the next day, it was back to the doctor for Rocephin (antibiotic injection, usually given 24 hours apart in 2-3 rounds). And again the next day, and the next day, for shots 2 and 3.

{The following Tuesday we went back to the doctor for Hannah with a 48-hour high fever thing. Flu and Strep negative. A week later we were there again with Hannah for another super-high fever and bad cough.  A trip to the hospital for a chest x-ray showed “peribronchial cuffing” – non-specific inflammation. No pneumonia as anticipated. Both things, the doctor established, were most likely viral. How unfortunate to make that many trips to the doctor’s office. That’s a lot of wait time with two kids, as I’m trying not to freak out about them touching everything and all the other sick kids in there.}

We took Joseph for his two-year well check on Monday (more on that later). Because Joseph was coughing and had beaucoup nasal discharge like his sister, Dr. Jennifer checked him out and…you guessed it, another ear infection. Well he was not. The last one did finally clear, so this is counted as a separate one. And in case you are curious, we are not having the tubes discussion at this point. There have not been enough infections in the last year to warrant that. Thank goodness. We are hoping to clear this one with an oral antibiotic (Amoxicillin). Please pray that it works!

{Hannah is still dealing with a sporadic cough and runny nose, so since she came along to the doctor, we checked her out, too. She had fluid in one of her ears, but with Joe and I both being antibiotic-hesitant we decided to do “watchful waiting” for a couple days.}

After a quick check with the otoscope in the preschool parking lot today, Dr. Jennifer said that Hannah’s ear is better and Joseph’s is improving. {The perks of having a doctor who is a friend and generous with her time.} Good news! Hopefully that means Joe and I will be well soon, too!

I will leave you with these pictures, also taken while at the doctor’s office: 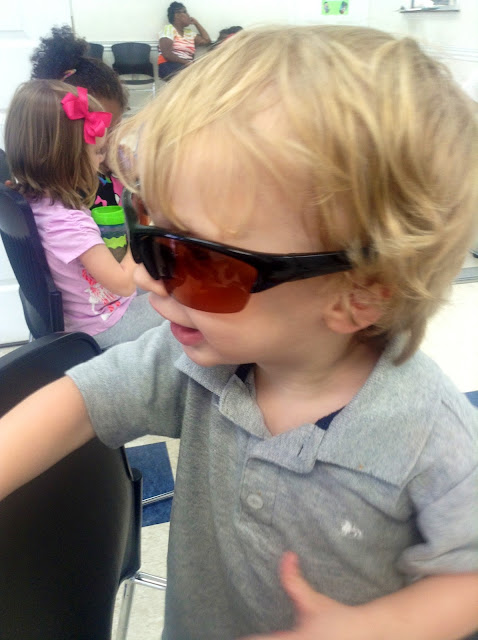 {Finding things to do in Mom’s purse…long wait.} 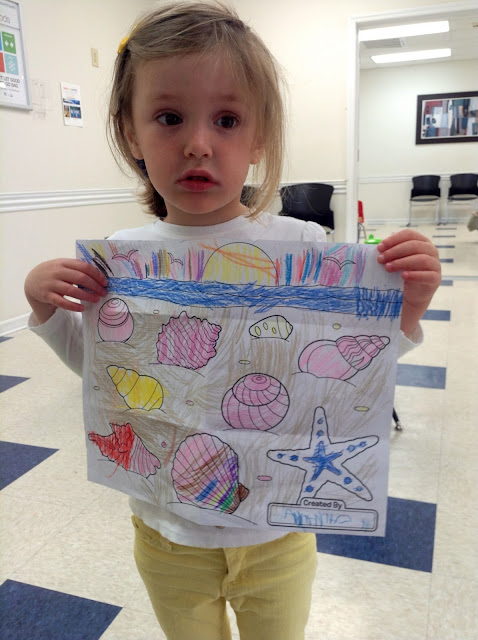 {Short wait…showing me the picture she colored (the day before) for Aunt Karen, her godmother. She is learning to write her name!}