I said I was going to post about Shoreline, so here we go!

Over the last eight months, everything has been leading up to this point: the launch of our church. Our launch service was February 5th, but before I post about that, I want to tell you how we got there.

And, before I begin with that, I’d like to explain the name. Joe and I thought long and hard about what God wanted us to call this new church. It involved discernment and a lot of prayer. But, in the end, it was clear. Very clear.

The name “shoreline” kept coming up. I couldn’t shake it. While we were waiting to find out if Joe’s proposal to plant a church would be approved, and while we were waiting for-seemingly-ever to find out where we were going to moving, the word kept surfacing. I would read something in a daily devotion or something in scripture, or even hear a song, and the path kept pointing to this word: shoreline. Joe was definitely feeling the nudgings, too.

The shoreline is a place of transition, and that’s what this church was going to be all about: transitioning into a life lived for Jesus. From our website:

In John 21, an exhausted and dejected group of disciples are fishing out on the lake with no success. Suddenly, a resurrected Jesus calls them to the shore and invites them to fellowship with Him. Joy and hope revives in the disciples and Jesus sends them out to build the church.

This is God’s calling on us, and this is where Shoreline receives its purpose: to worship and know Jesus deeper so we can help others do the same, all while serving and loving whomever we meet.

Before we ever packed boxes and moved, we had a name. That was big!!

As you know by now, we moved here in June knowing almost no one. A friend who grew up here referred us to our realtor, and then we knew Joe’s “boss” – the district superintendent. {The South Georgia Conference of the United Methodist Church is broken up into districts. Each district has a superintendent who all the clergy answer to, so to speak.} That’s it. We met up with some friends of friends, and Joe worked through some UMC connections to meet people and that’s how our little network started. That, and meeting random people in stores, restaurants, and at the gym.

For the first time in our marriage, we moved to a place we didn’t immediately have a network, a community. Our other moves provided us with a church family instantaneously, our personal friendships grew from that soil. It was a really weird feeling.

It was also really weird for Joe not preaching. We actually went to church every Sunday, all four of us, together.

In the church planting world, they call what we are doing a “parachute drop”. It’s basically saying, “here ya go: here is your new appointment, this is your new city, here’s a small budget…go start a church.”

You can use the word scary; it definitely is.

One thing we do have is an awesome coach. Dave is a church planter who trains church planters. He works for Rick Warren and now coaches the pastors of Saddleback’s daughter churches. He has also coached other church planters all over the country. We are super fortunate to have him and very thankful the Methodist church allowed us the opportunity. As I posted in that 2016 catch up post, we got to meet him in October while at a church planting conference in Orange County, California.

Since I realize that most people have no clue what a church plant involves, and we didn’t before this all began, I’ll explain the process…

Over the summer we worked to gather people together – people that would be interested in coming on board to help us start a new church. This would be our core group. We cast the vision of what this church will be, what it will look like, over and over. By early fall, we had built a leadership team, a group of believers committed to the cause and ready to help take on some of the load and do the work of actually “doing church”. One of the couples in this group are Grant and Rachel who were also brand new to Valdosta. The pastor of their previous church was involved in our planting and told them about us. They were in from the beginning and, without a doubt, were a God-send.

Besides the leadership team, there were hundreds of other details and logistics to work out, too.

We needed a bank, an accountant, and a graphic designer to do our logo and branding, and to help us with a marketing strategy. We needed a website.

Stephen, our graphic designer, is legit. We absolutely LOVED the logo he designed after listening to us talk about the church, our passion and God’s vision. We made zero edits which, coming from an artist like myself, is saying something.

We also established our mission. We wanted it to communicate clearly what we were about, and we wanted it to be shore. And it was:

At some point in the summer, Joe received a phone call from a guy named Will. We are not sure how, but he got word of what we were doing and wanted to be involved. Turns out he was an audio engineer and had a good bit of experience in something Joe and I knew nothing about: exactly how to put on a worship service when it came to lights, visuals and sound. He was willing and enthusiastic about using his gifts to serve and, for that, we will be forever grateful. That phone call had God’s fingerprints all over it.

By the end of July, we were focused on assembling a “launch team”. Joe and I filmed a brief video (3 min) stating who we were and what we were doing. Then we asked for temporary volunteers to help us put on our “preview services”. These preview services were once a month, starting in October, and going until the “launch” of the church, which is the first official service as a church and the start of weekly worship with services every Sunday.

The video was posted on Facebook and was shown in the services at both large Methodist churches here in town. Joe had established a good relationship with the senior pastors of both churches and they were very supportive of us, which was a huge blessing. These temporary volunteers would come from these churches for the most part. We were asking them, once a month, to attend our service instead of going to their church, until we launched, then we would be on our own.

We were floored by how many people so willingly wanted to help us. Just another example of how powerfully we saw God working in our midst.

While all this assembling of teams happened, Joe worked hard finding a worship leader to put together our worship team (band) and a place to actually worship.

As for a location…yet another God thing. We wanted to find somewhere we could stay for the foreseeable future. We were going to be a “mobile church”, which means set-up and take-down would happen every week. Schools are usually very popular places for church plants to start out. But we had trouble getting into a school here; they only allowed for short-term scenarios. We wanted something long-term. Movie theaters are also a popular place but the cinemas here had never done that type of thing, so there was some red tape there.

Through someone who Joe officiated the wedding of, he was put in touch with the owner of the theater company, and was given a contract within a couple of days. It was signed, specifics were sorted out, and we had a place. That was a gigantic relief.

We met Austin, who at the time was leading the contemporary service at one of the Methodist churches here.  This part of God’s plan is simply incredible, but the really short version is: Austin had been feeling that God was calling him to be part of planting a church in the months leading up to our coming to Valdosta. He knew nothing about us and we knew nothing about him. In a crazy sequence of events, he left his current church (with their blessing, which was important to all of us) and joined our team. Austin is very talented, a spiritual leader, and just a fun person. We love him. 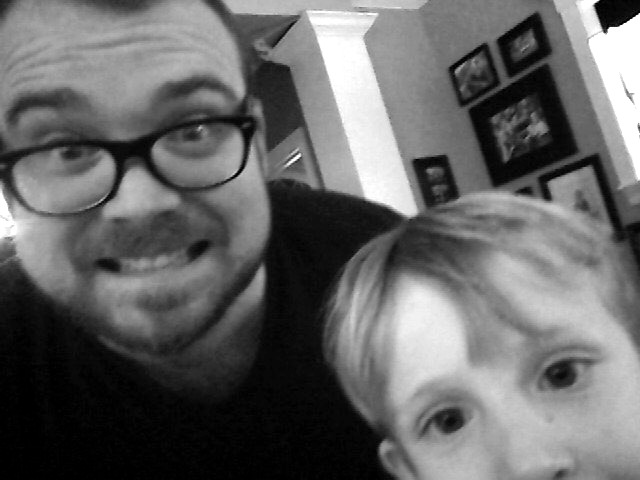 {Taken by Joseph, with his new camera on Christmas.}

August, September, and into October, we were busy getting stuff. Everything from signage to connection cards for people to fill out. We needed a curriculum and supplies to run our kids ministry. We needed pack-n-plays, baby gates and play mats, toys and diapers and everything else for our infant and toddler nurseries. We bought baskets for the offering, coffee pots and all the things needed for hospitality and guest services.

We shopped in local stores and online for weeks, collecting things – the boxes piling up in our home. The list of to-dos was extensive and we were moving at a fast pace to get it all done. 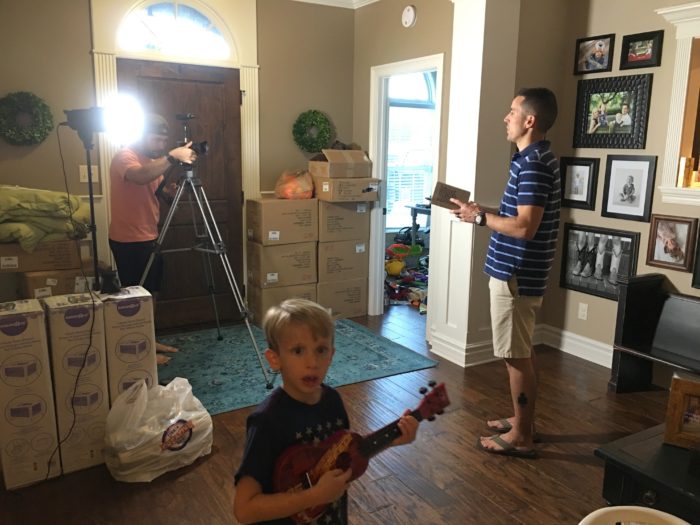 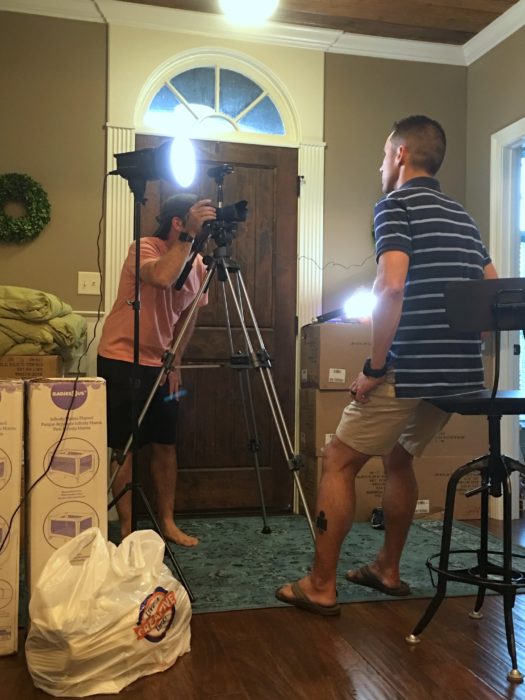 This doesn’t even include all the work the worship team did to get us ready. We obviously needed musicians, instruments, stage, visuals, sound and lighting equipment. Joe and I are forever indebted to Austin, Will, and Brant for making all that happen, and doing it so well. They are an awesome trio.

And so, like in preparation for a wedding, the months of planning all came to fruition the day of the big event: our first preview service.

To be continued… I know this post is already too long.

« our new house
previewing and launching »