So, in finishing out April, there’s been a 5th birthday celebration wrap-up (five is a big deal!) and a few miscellaneous happenings…

The kids had their annual teeth-cleaning. Yes, annual. If it was free, we’d go more often. I took them, and while I expected it to be an exciting visit, they both did great. What I really mean is Joseph did great. I knew Hannah would. But little brother is all into everything and wants to know what each and every tool, button and lever does. His curiosity is cute but also drives me batty. 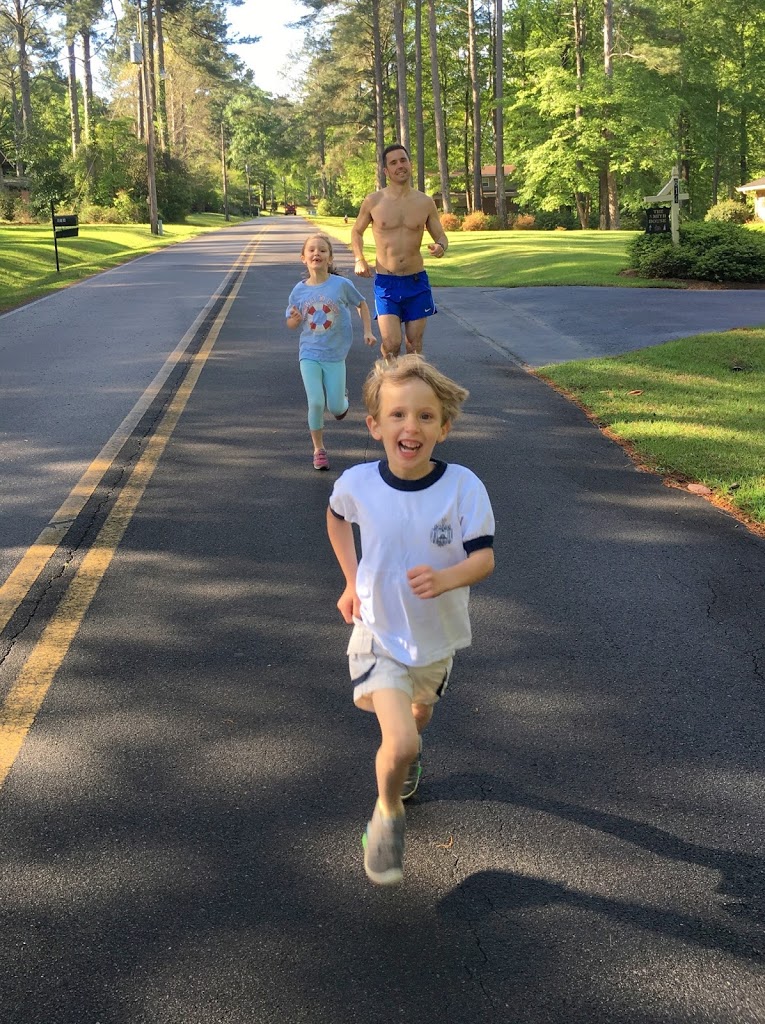 … Joe sends me a text right before he leaves the house (I’m typically still sleeping) letting me know when he’s going to be back. The kids get ready and wait for him to round the corner at the end of the street and come into view from the front yard. Then I sit on the front steps with my coffee as they run with him up the street and back, his “cool down”.

Sometimes Joseph runs and sometimes he rides the police motorcycle. Hannah is always running alongside her Daddy, arms swinging and long legs in a future-runners stride. Sometimes I’ll walk to the street and capture it on camera. We have a collection of these photos. It is a highlight of their weekend and, I hope, a memory they will never forget. 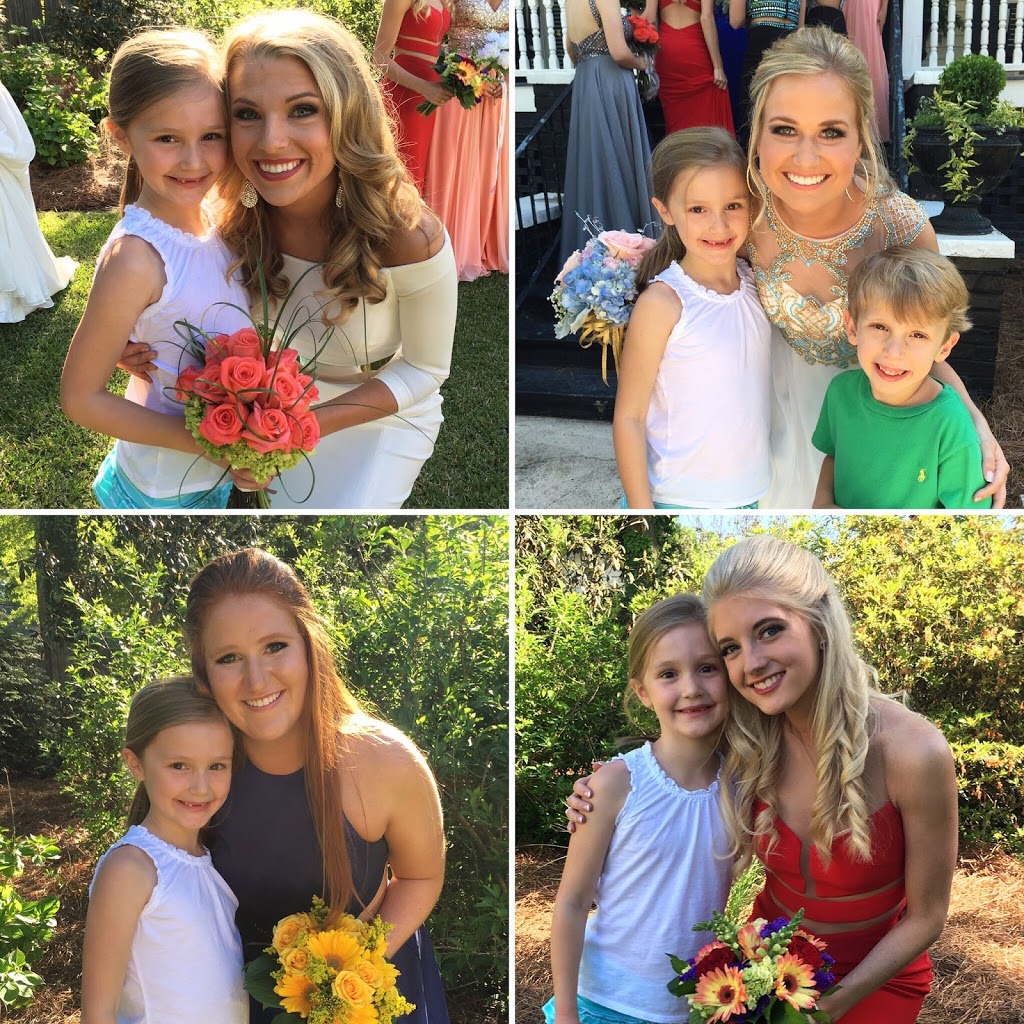 We took Hannah and Joseph to see their favorite big girls (and babysitters) all dressed up for prom. They do it big here; it’s like a wedding day, starting in the morning. The girls get ready in groups, the seniors meet at of their houses to take pictures, then they go to another house and have pictures taken with the juniors. Then they head to the dinner and dance. We met up with them at their first picture spot. I’m telling you, after the amount of photos that were taken (way more than at my wedding), I don’t know how they held up for round two, and then again at “Grand March” at the school where the parents and friends are invited to come see the prom setting.

JOSEPH is FIVE, did you hear?! He has told everyone that will listen.

The celebration continued all that weekend prior to his birthday. He got to open a couple presents from Meme early, including a super cool Giraffe clock for his room and this Nerf gun

. “SHARPFIRE” is right. It’s a serious Nerf gun. We went to a local middle school baseball game and then had lunch at Diary Lane. 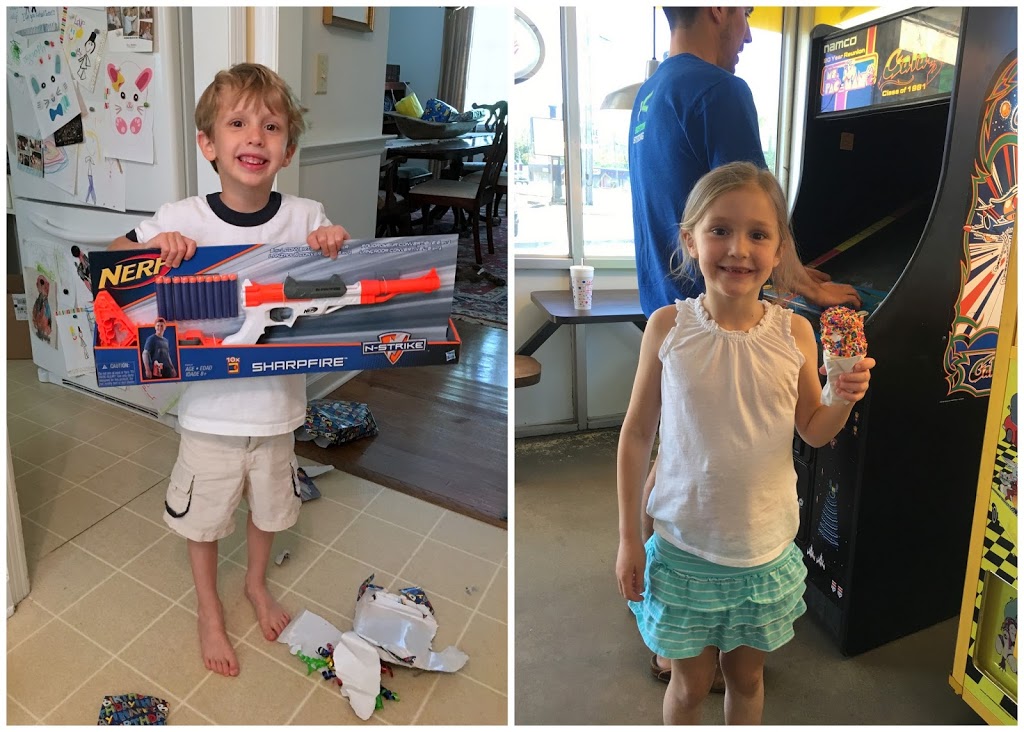 {I interrupt this subject to show you these pictures of this toothless beauty (in my glasses) following church.} 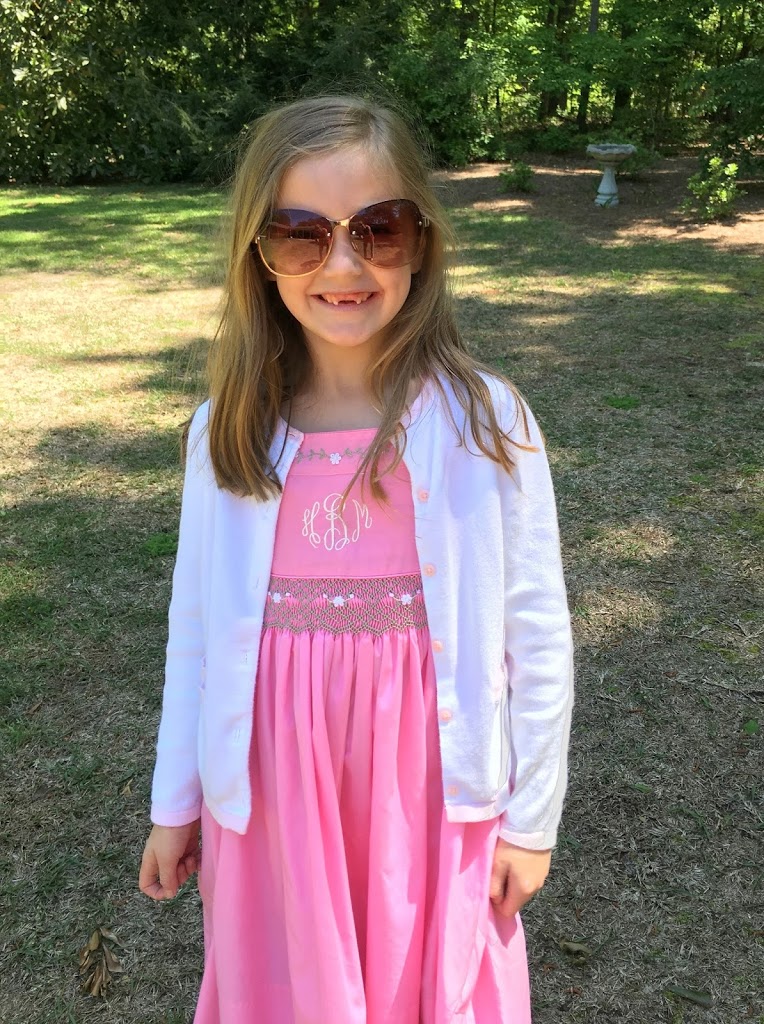 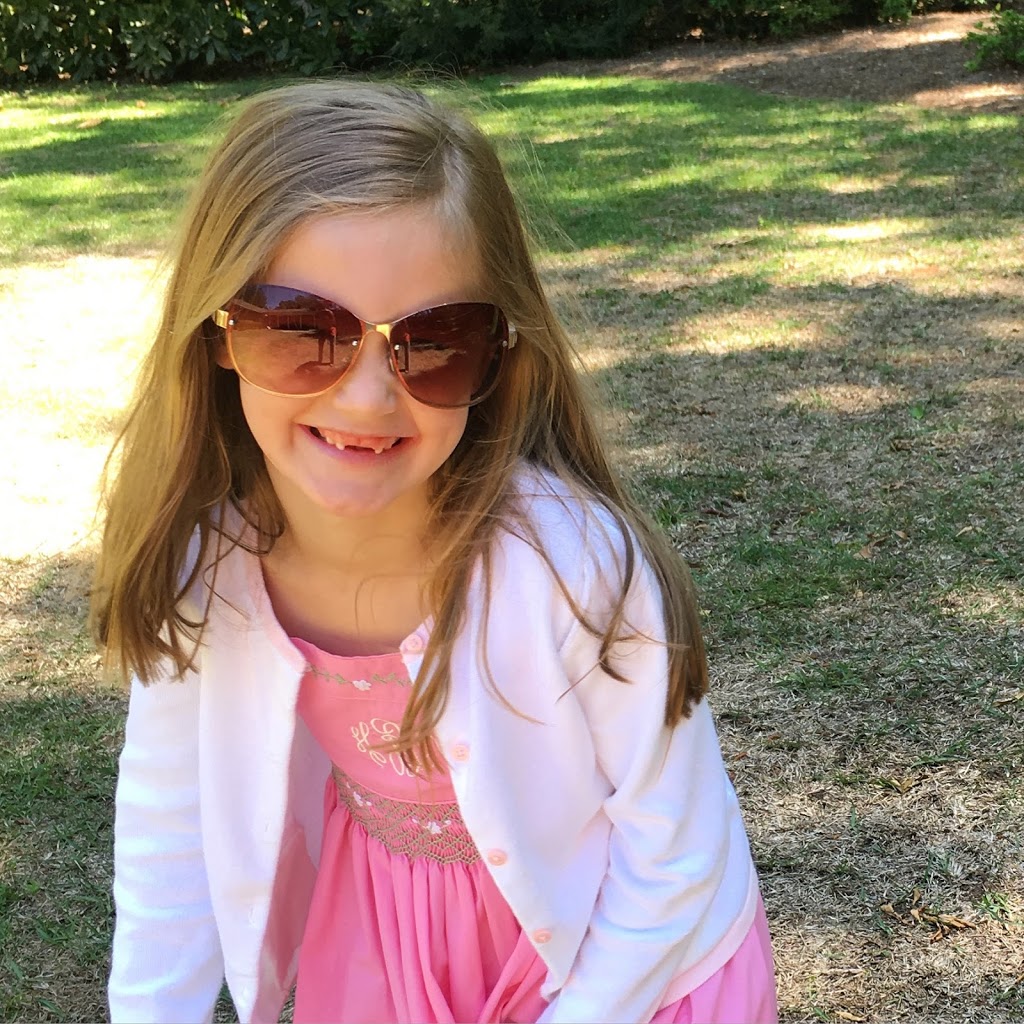 Back to Joseph. His actual birthday was Monday, April 18th. I sat with him at breakfast and then brought cupcakes to school in the afternoon, taking Hannah out of class to join us. Joe came home in the afternoon and we played with his new toys. 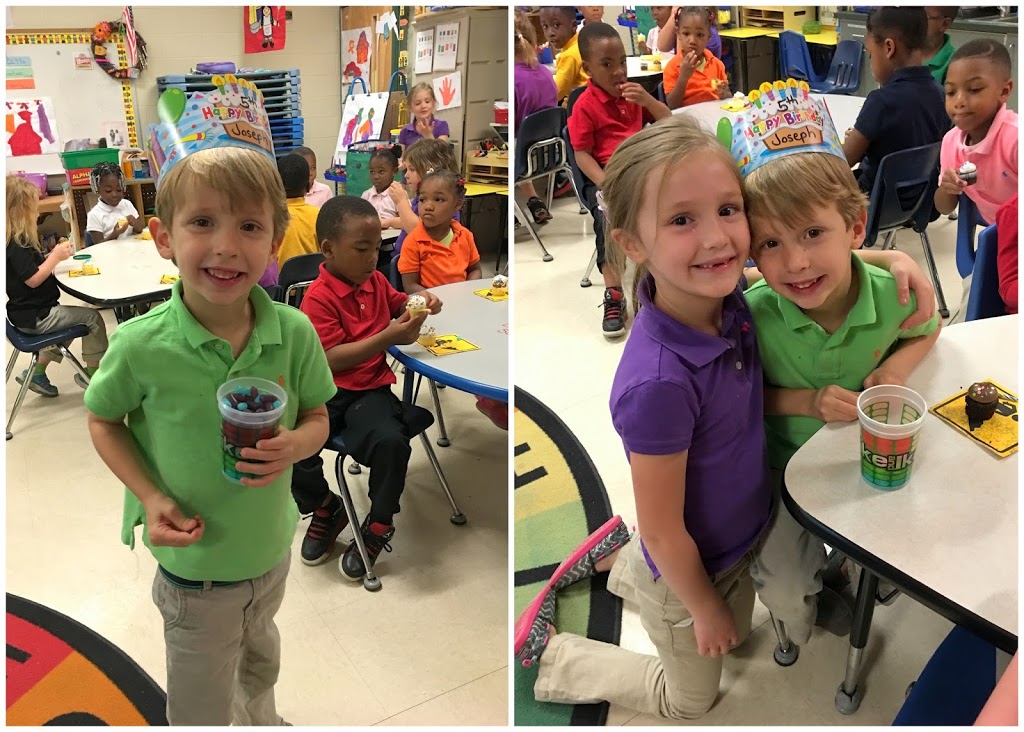 He got the remote control race car of his dreams. Seriously. He picked this toy out at Walmart back at the beginning of March and reeeeeeally wanted it. Please Mommy, pleeeeeeease. There were tears.

{Yes, he’s barefoot, and when I sent this picture to Daddy you can imagine his reaction, “Where are his shoes?! It’s WALMART! Hello, bacteria!” I will say he’d been in the cart until he saw this display and climbed out. I wasn’t too worried…}

Joe went back and got it the next day and Joseph found it in the back of the car when Joe got out and ran into his office for a second. Then he had to go about six weeks knowing we had it but that he couldn’t have it until his birthday. Torture. It’s all he would talk about when asked what he wanted for his birthday. He only wanted that “race car”. 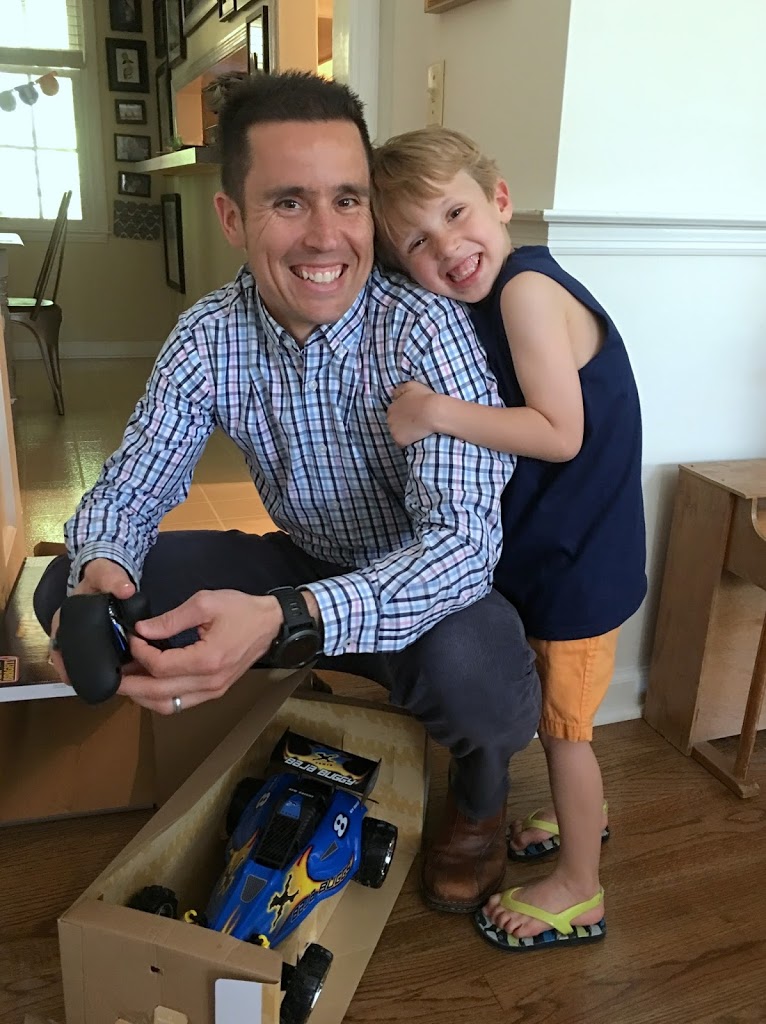 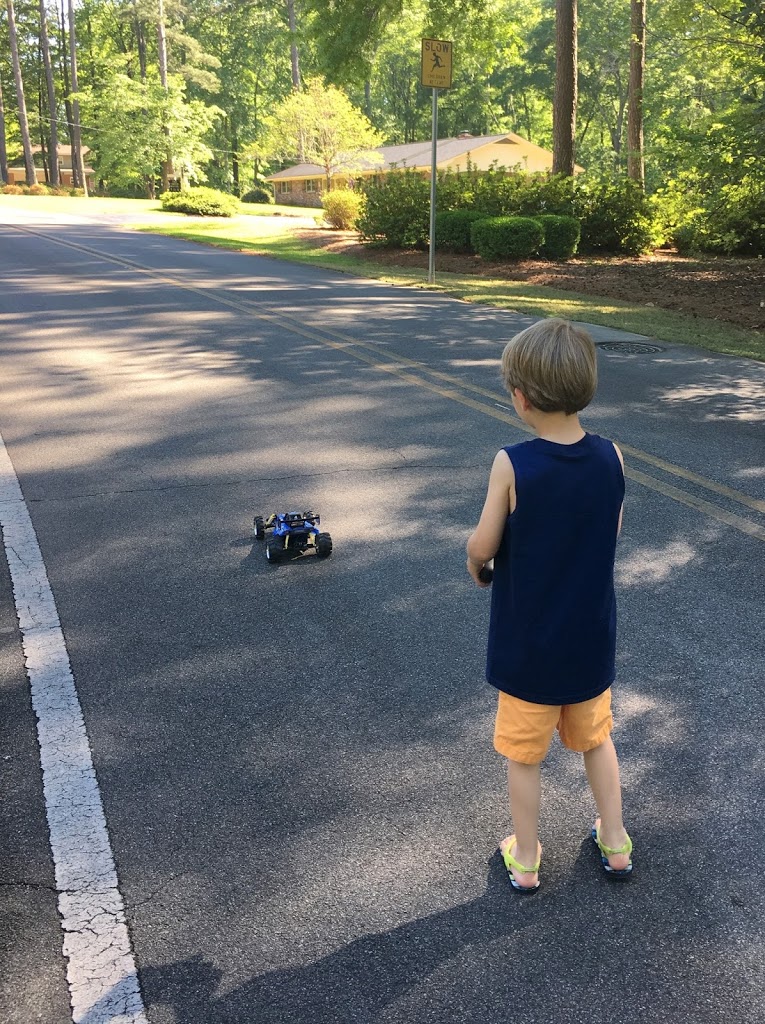 The boys made the birthday cake and we played outside. Going out for pizza was a no-brainer. This child would eat pizza every single day. Then we came home to sing and have cake. 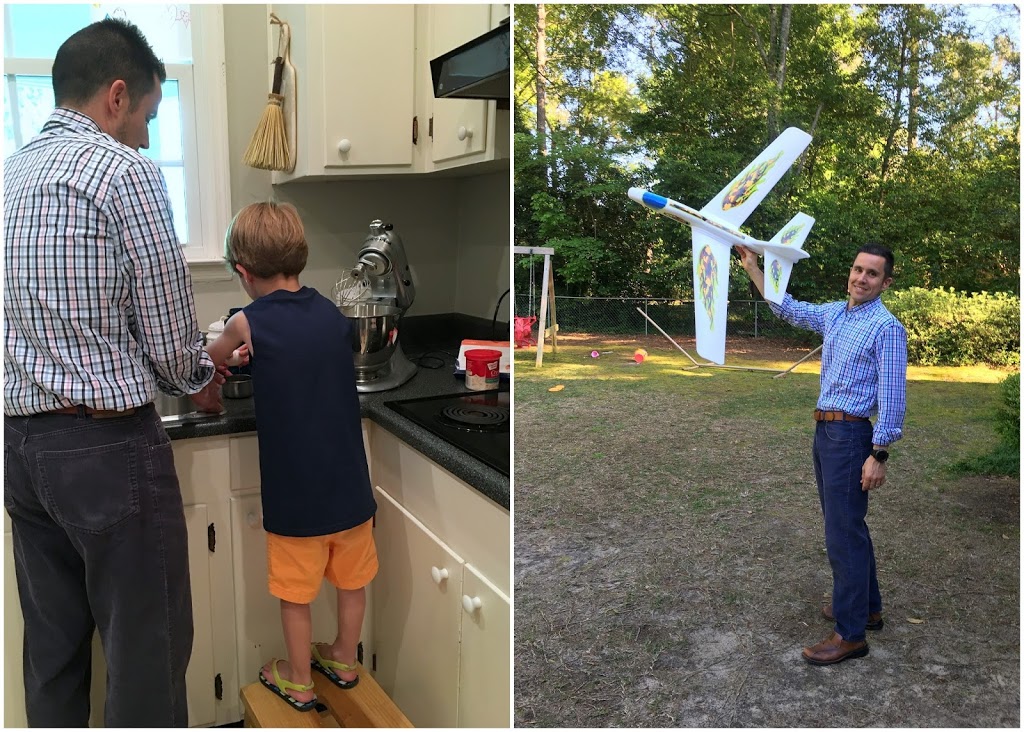 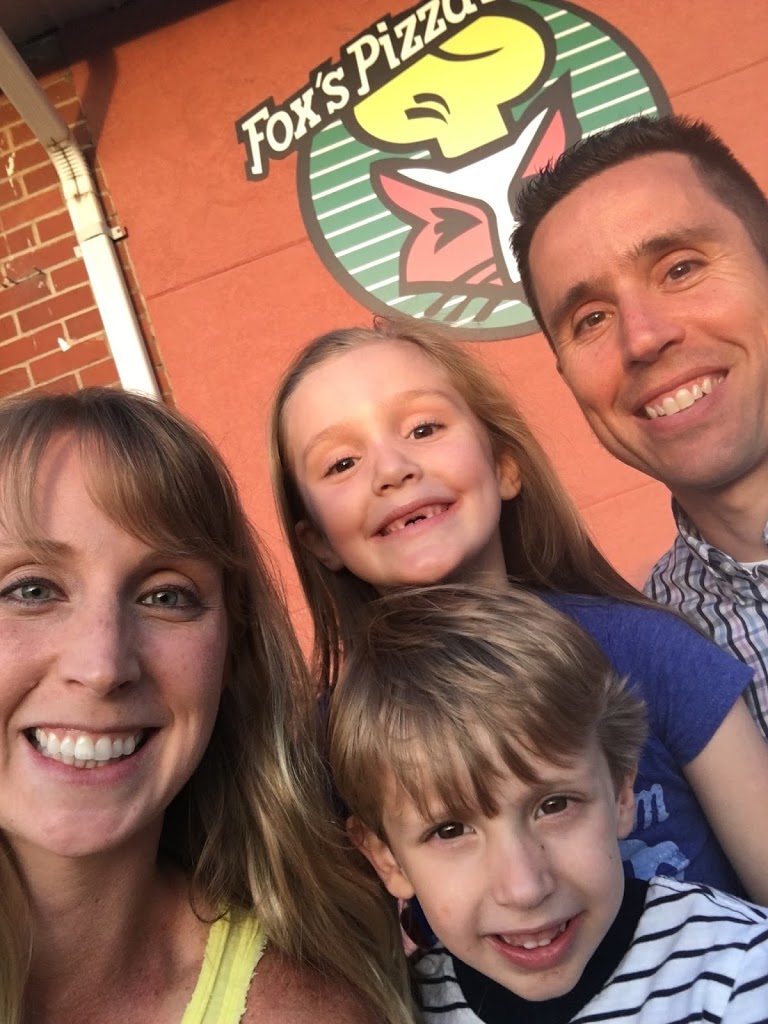 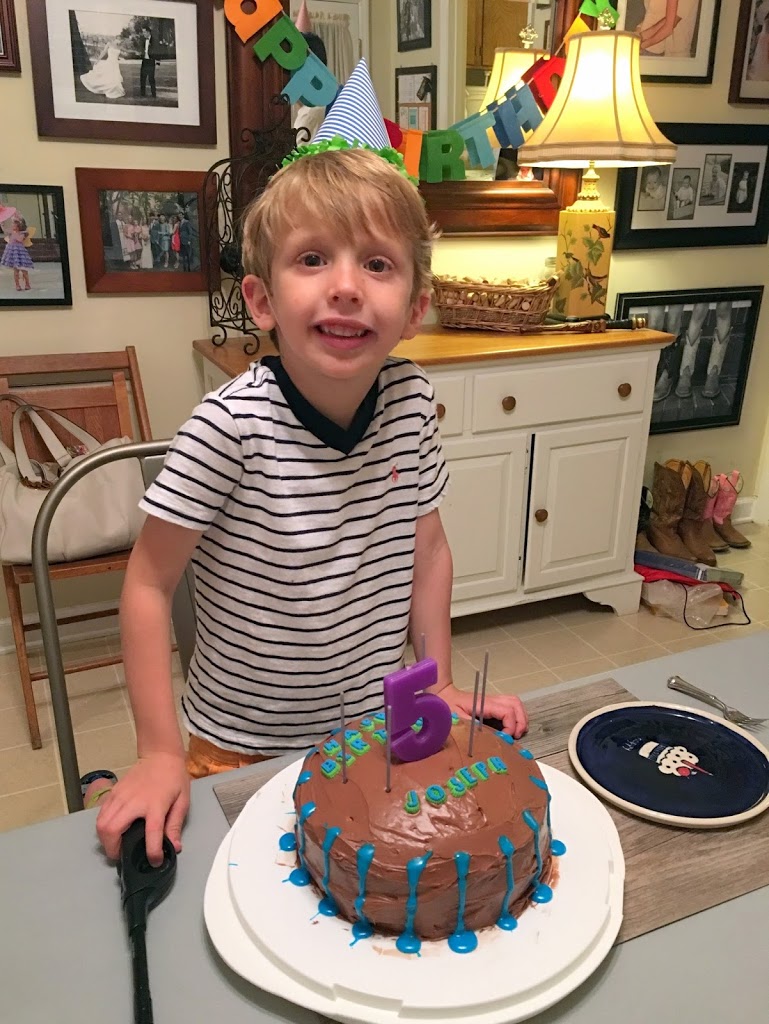 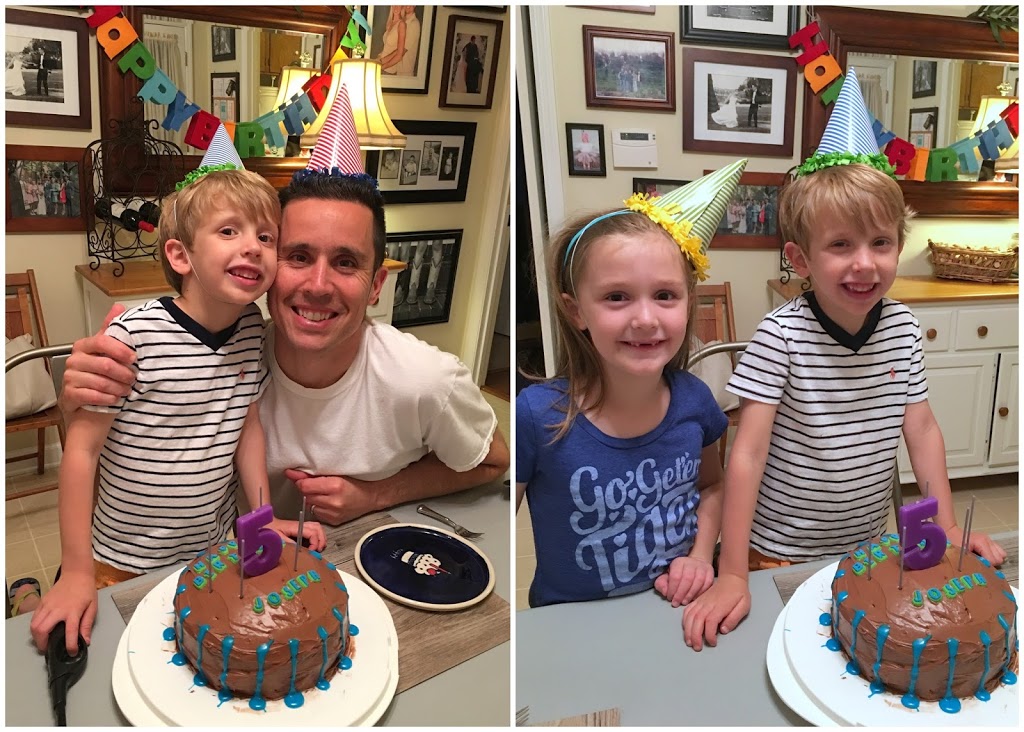 Joseph had a couple of local field trips – one to Washington EMC (the electric utility co-op) and the other to a grocery store. Very exciting. 🙂 He loves to ride the bus: 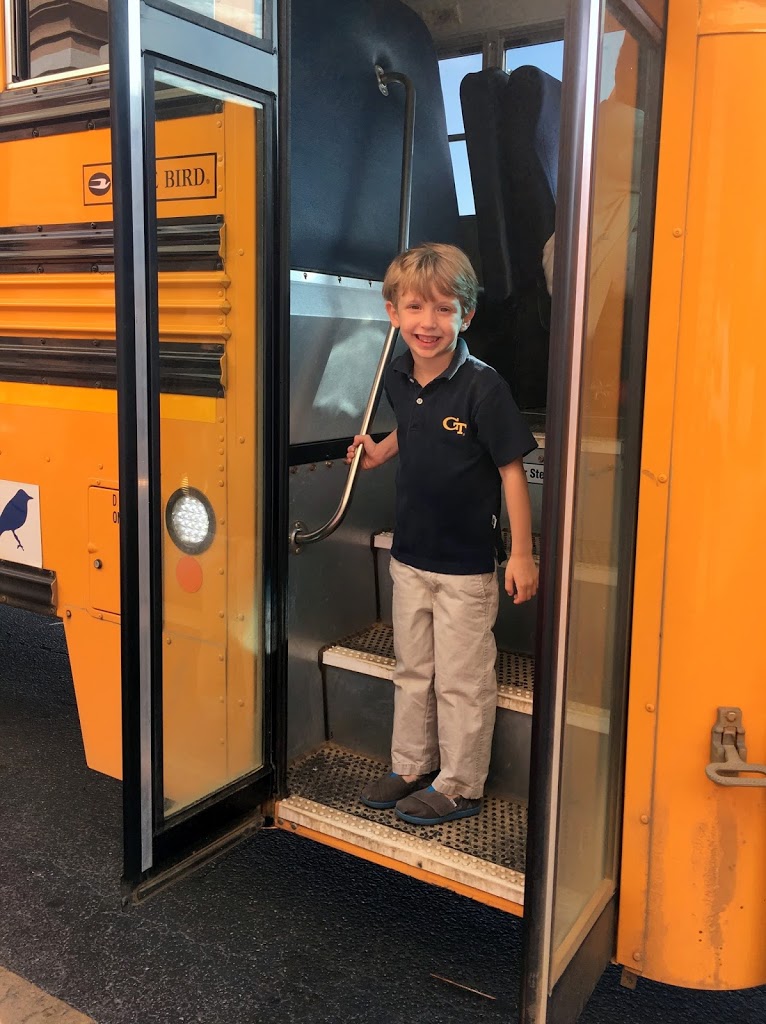 The following Saturday, April 23rd, Hannah and I attended the Girl Scouts Taster’s Tea. Her troop represented China. Other countries represented were Mexico, Ireland, and Puerto Rico. We learned a little about each country and tasted all kinds of different foods.

Hannah wore a little Chinese dress my mom had brought back from Chinatown somewhere (San Francisco? NYC? can’t remember) years ago. It is way too small but we made it work as a top with leggings. 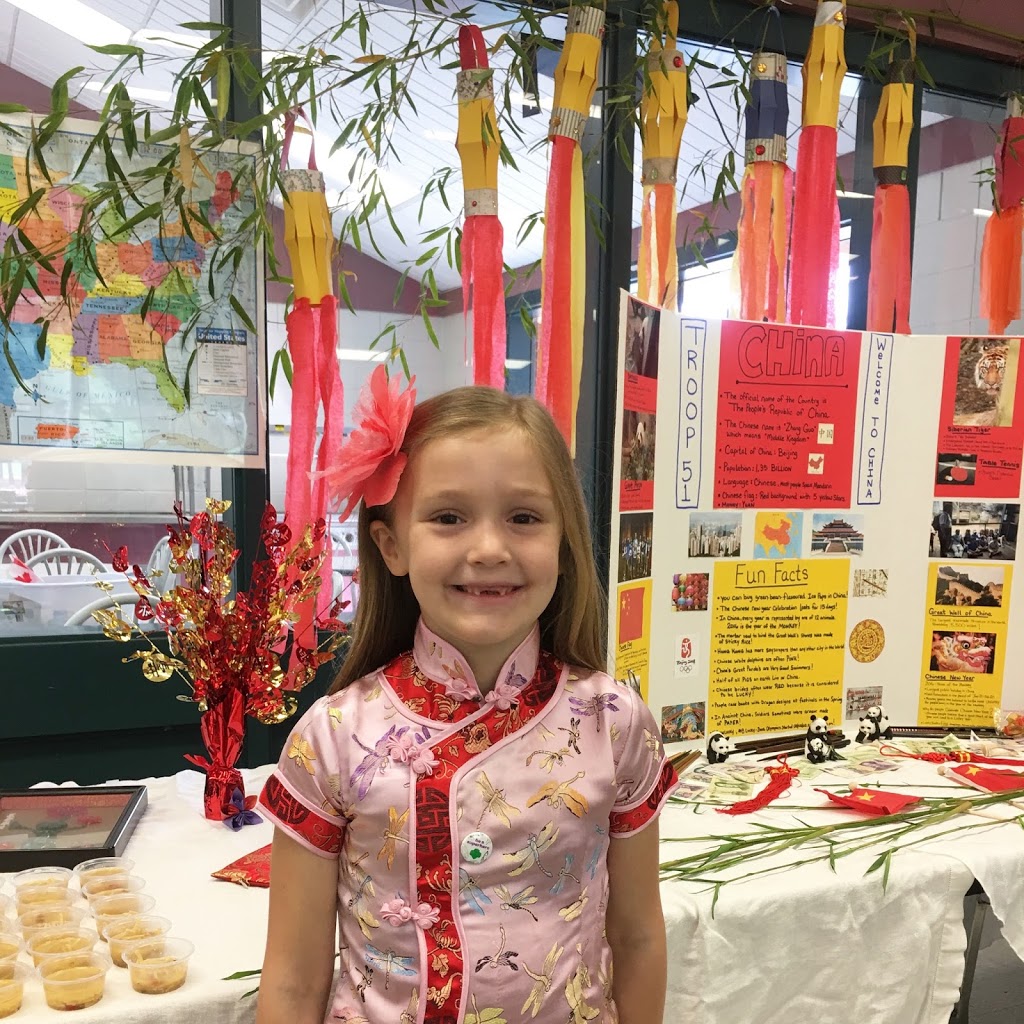 They made the lanterns and other Chinese things over the last month. It was neat to see it all pulled together.

Later that day, we drove over to Dublin (45 min) and met Uncle Will Will, Aunt Crystal, and Stella for bowling and dinner. One final 5th birthday celebration. It was our first “real” bowling experience as a family (there was a miniature version at Great Wolf). While we waited on the Brooks trio to arrive, Joe and I showed Hannah and Joseph how to shoot pool. Back in my college days, I was pretty good. I must say, it’s not like riding a bike. I haven’t played in forever and I was terrible. But we had fun! 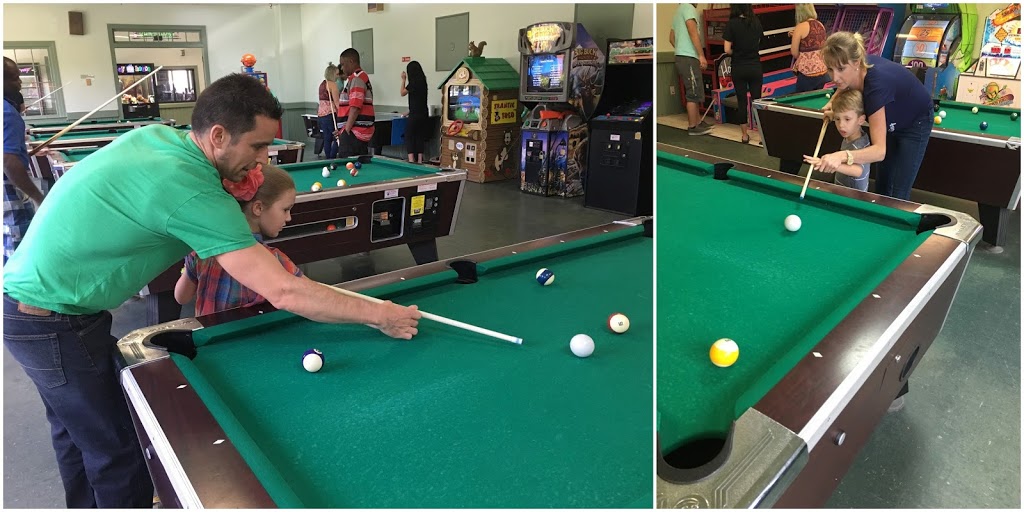 Bowling was a blast. The kids played on one lane with the bumper rails up, while the grownups played on the next one over. Hannah tried several techniques, including granny-style. She was intense and focused…similar to her skee ball approach.

Joseph loved sending the ball down the lane, oftentimes with a loud bang on the floor first (we grimaced every time, wondering if the wood would crack). He might have been most interested in the ball return, though.

We gave Uncle Will Will a hard time for having his own bowling shoes (he did buy them back in college) and playing the worst. I will say, about half the time, he did bowl with a one-year-old on his hip… 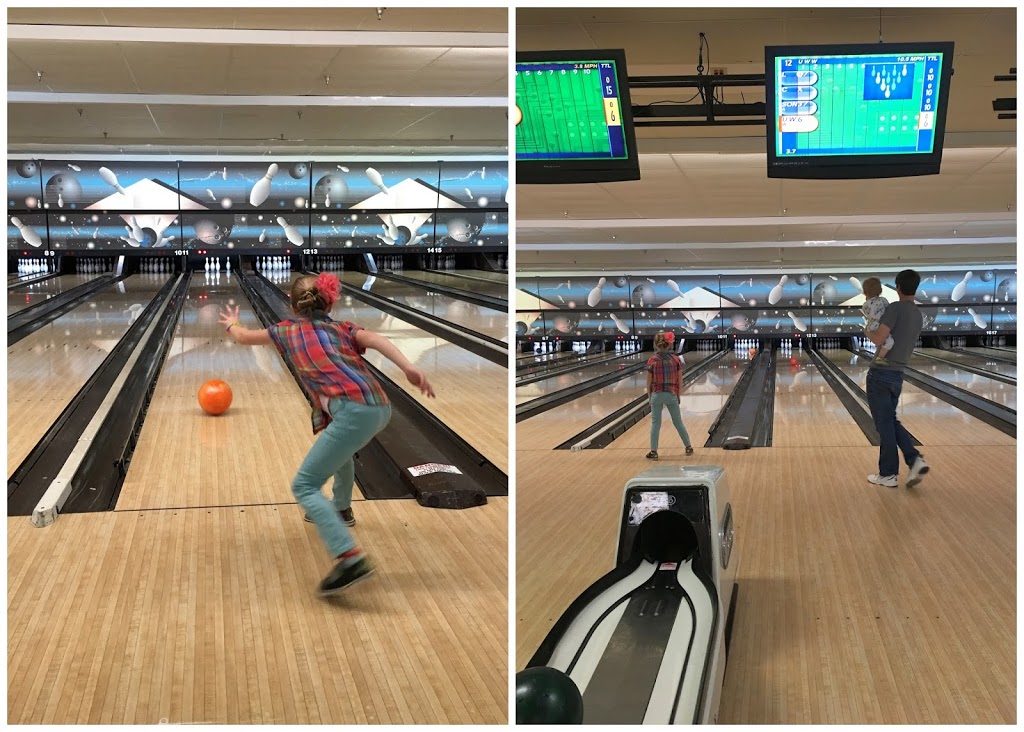 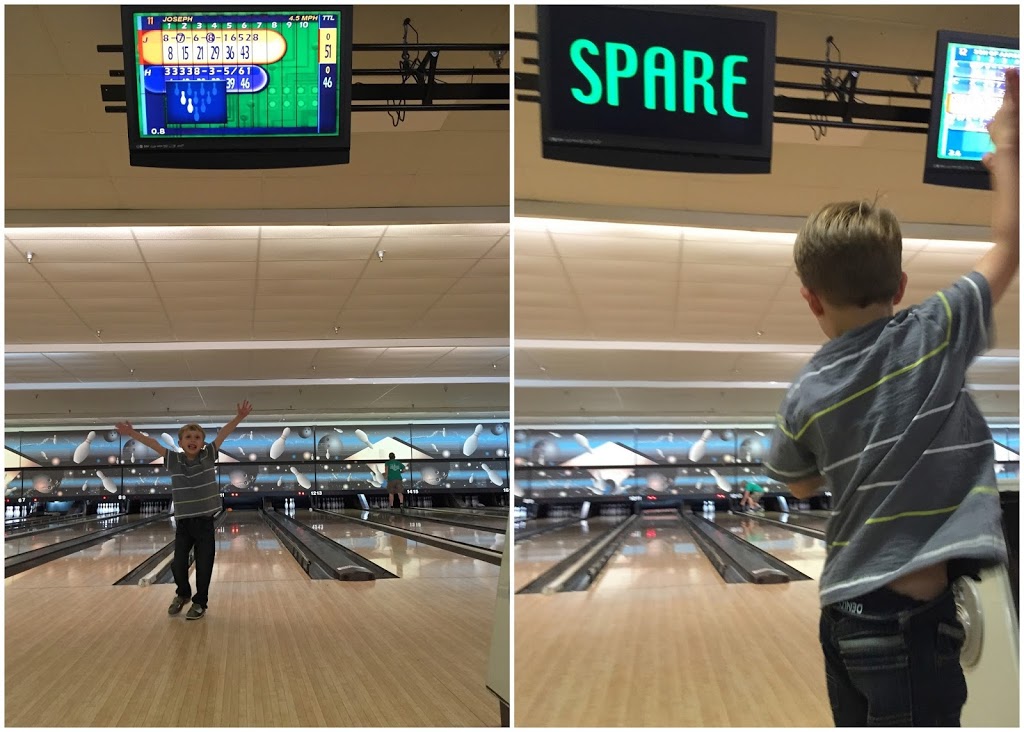 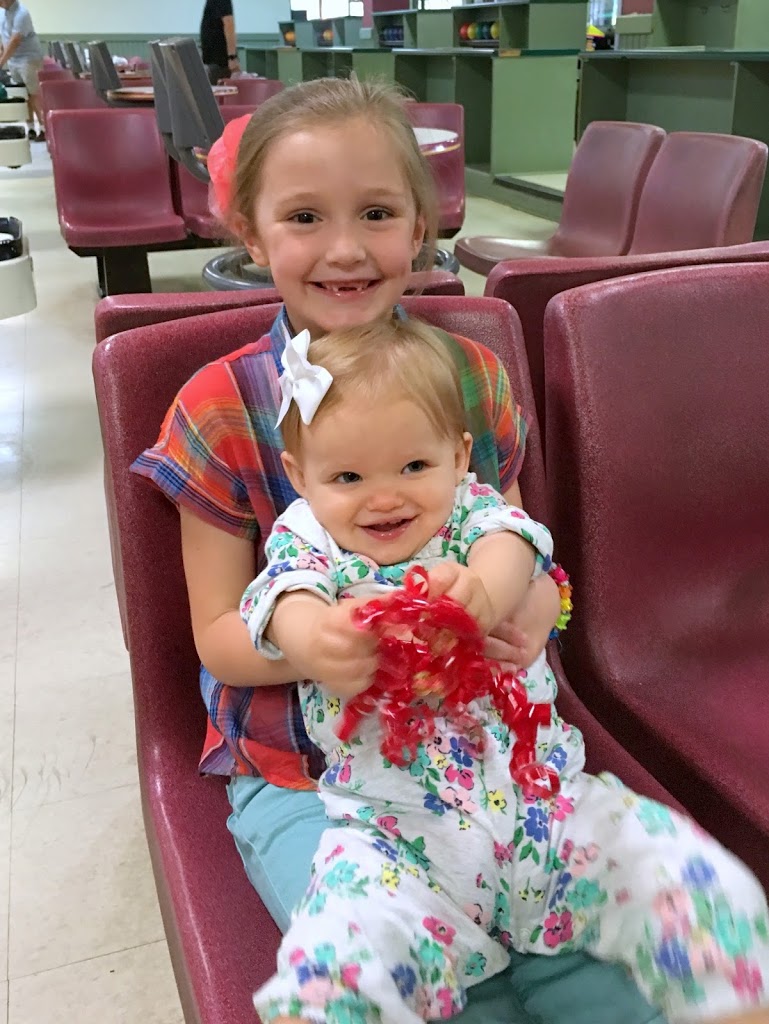 Finishing out April, a couple pictures from this past weekend and one other story of note…

I helped drive Hannah’s Girl Scout troop to visit a local beekeeper. We learned all about honey bees and the job of a beekeeper. He was very clear as the bees were flying around us, to not panic and swat, but to remain calm. At one point we are invited over to an observation box on his front porch to look at the bees (and the queen) through the glass. Well, you had to walk right through the flight path into the hive to see into the other side. Bees were flying, the girls were walking back and forth, most remaining calm, and all was well.

Then comes my little boy. He was apprehensive at first but wanted to go see so I walked with him across the porch. We looked and started to walk back, when he got stung. Yep. He was calm, walking slowly and doing what he was supposed to…and got stung. I’m not sure how it happened but the troop leader saw the bee flying towards the box and encountered Joseph’s little legs as he was walking, perhaps threatened by the movement. I don’t know, but it was so not fair. He was tough but couldn’t hold back the tears.

Of course, he’s had allergy testing done recently and we found he is allergic to several things. We did not know about bees, but I didn’t want to gamble on that. I drove the mile over to our house and grabbed his epi pen. The sting hurt and he cried, and he complained off and on of leg pain, but he was fine. So…not allergic to bees! 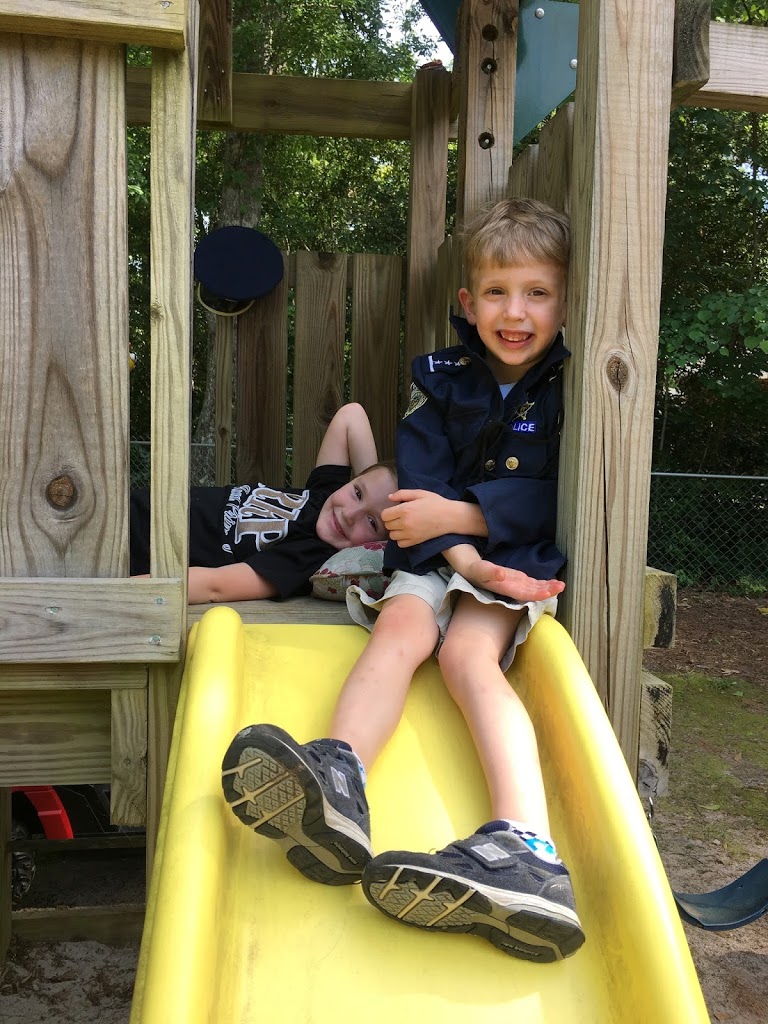 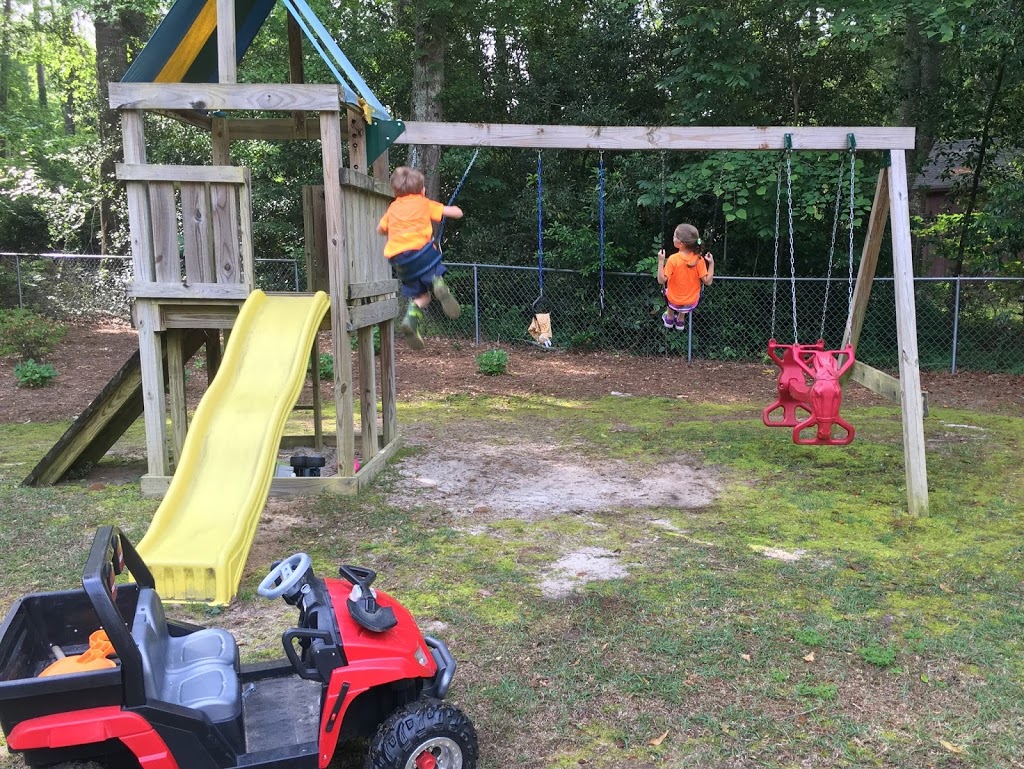 Those two love that swing set and have made so many memories playing out there together.