The week of Halloween was busy as it always is. We kicked off the fun with the fall festival at church on Sunday, the 25th. Pocahontas and Captain America were very excited! 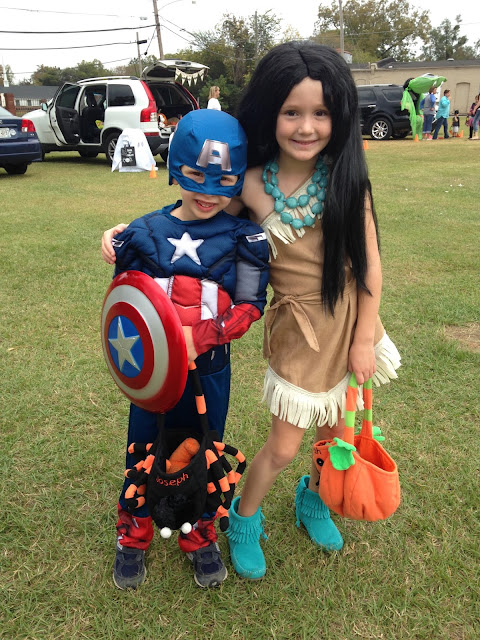 Their costumes were so much fun this year. Joseph was super pumped to be Captain America. Those little kid muscle costumes are hysterical. I had to buy the shield separately, but I mean, come on. How could I not?!

As for the little Indian girl… She really wanted to be Pocahontas and I could not find a single costume online that actually looked like Pocahontas – lots of Indian/Native American ones, but none exactly like Pocahontas. All the cute ones we saw were homemade. So what did I do? Make one myself? Of course not. But I did go to Hobby Lobby and pick up some material while over in Milledgeville while Joe was swimming one day. And then I got home and sent a message to a Facebook friend who embroiders. Turns out her mom can sew and she’d be glad to make little Hannah a Pocahontas costume. She was also very inexpensive. Score! Hannah and I were both thrilled how it turned out!

Hannah informed me that her hair did not look like Pochanotas’, so I remedied that by ordering a black wig off Amazon. Throw in a turquoise necklace of mine and her turquoise Minnetonka booties (couldn’t go barefoot!) and she was good to go. 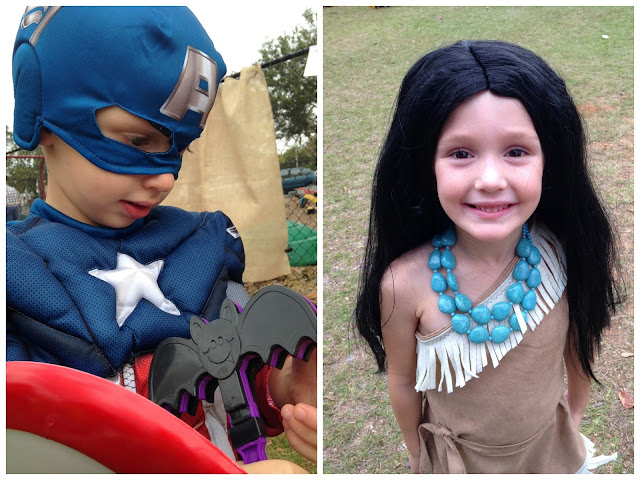 Joseph’s best friend, Weston, was also Captain America. They didn’t know the other was. Can you believe it?! 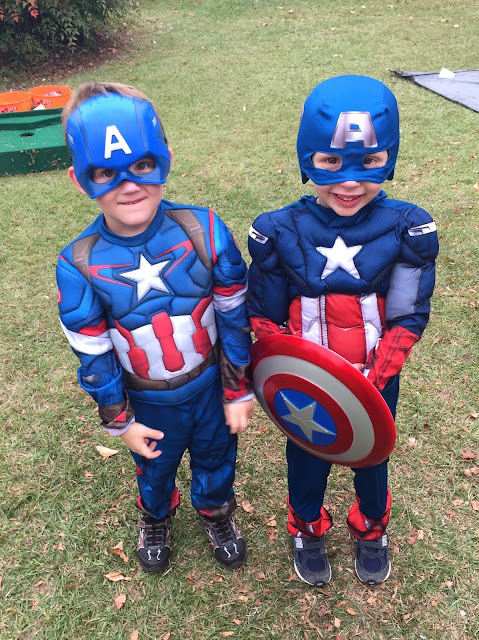 Love those two. Captain cuteness is more like it…

Joe signed us up to take part in the trunk-or-treat again this year. We’ve volunteered our “trunk” four out of the last five years and we have always done something elaborate, me letting my creative mind have fun with themes (spooky candlelit ghost trunk, race day, under the sea…). This year there was too much going on, but we still needed to participate.

Enter the teepee from our playroom. Stick Pocahontas in there with her basket of corn (er, candy corn), and set some pumpkins outside. 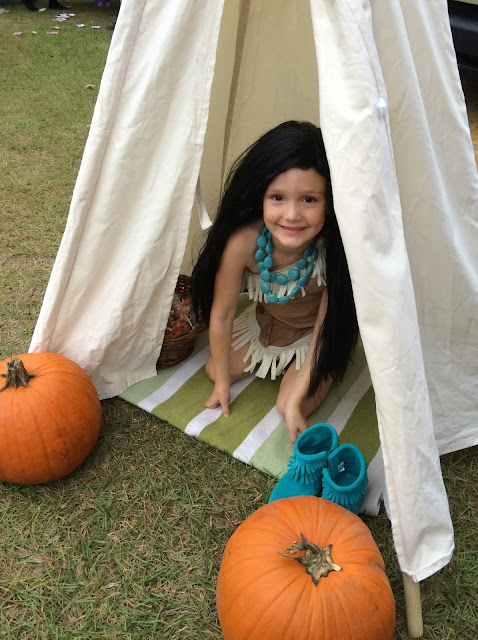 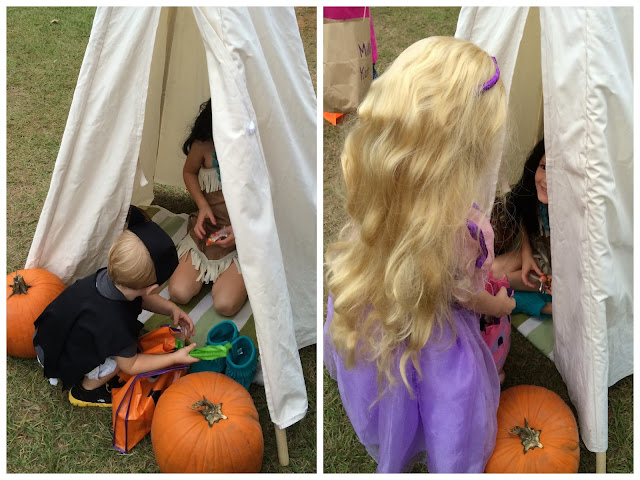 It worked out just fine. And minimal clean up!

That Tuesday was “School Rocks with Mom” for the pre-K. I enjoyed every minute of being with my little guy, completely in his element at school. We made an adorable little owl, too. 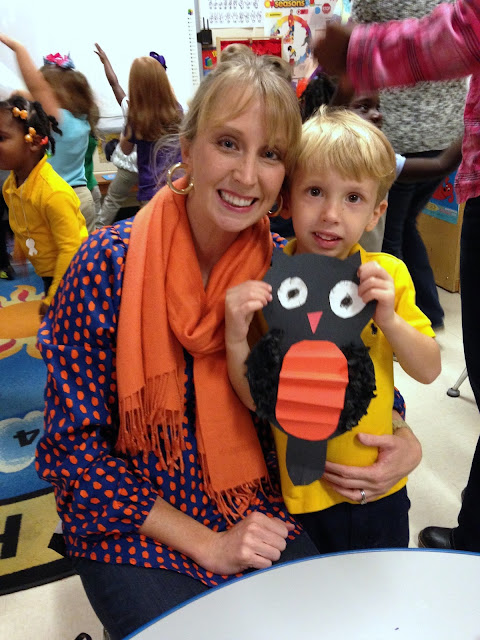 If there wasn’t enough going on, it was also Red Ribbon Week and each day had a theme. Thursday was jersey day as the kids “teamed up against drugs”. We proudly supported Georgia Tech and Auburn. With all the Bulldog shirts, my kids definitely stood out!

That day was also Hannah’s first performance in the Oratorical Club. Joe and I met her at a local nursing home and watched her recite her part of the grandparents program. Look at her in this outfit. I mean, really. Off to prep school…or Hogwarts. 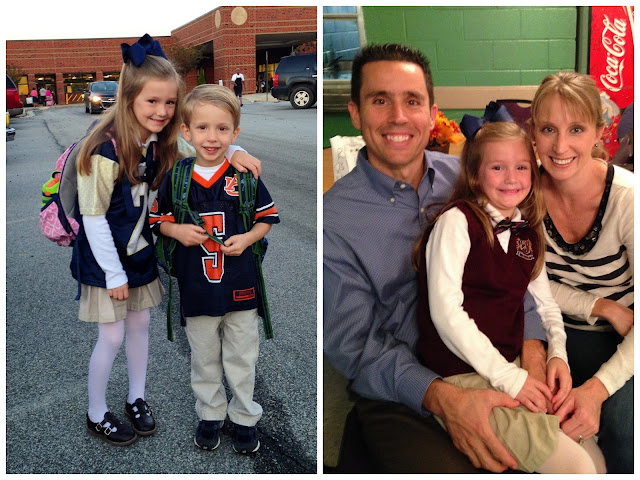 Then we had class Halloween parties at school. Joseph’s was Thursday afternoon, Hannah’s was Friday. They both ate plenty of sugar. 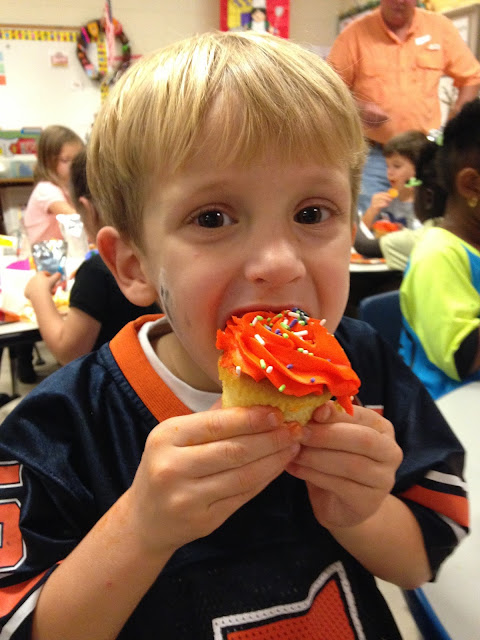 Joseph also went on a field trip to trick-or-treat around the square downtown, as Hannah did last year. It is so cute watching all the kids in costume parade around the town square, filling up their treat bags. The businesses all take part and even dress up, too. The morning is grand fun for the little ones. 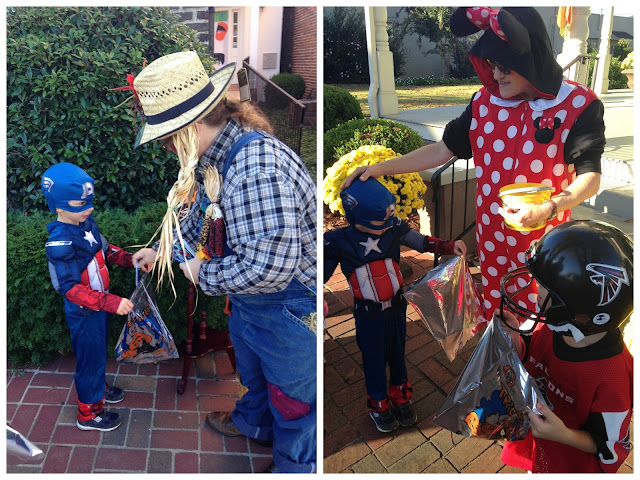 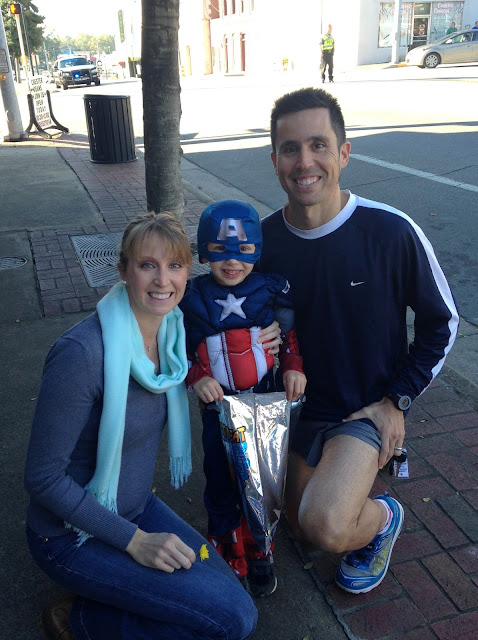 Joseph pulled off that little mum in my hand from a plant as he passed. He loves to pick me flowers – even those he is not supposed to!