I can’t type that post title without little Nemo in my head, so excited on his first day of school. Joe even played the clip on his phone for the kids that morning before breakfast…

So, the day is here! For the first time in almost six years both kids are in school all day long. They are excited and I am excited!

We went to open house last Thursday and they carried their school supplies into their new classrooms. Let me just say, I think it’s going to be a GREAT year. I really like their teachers and have heard a lot of good things.

Joe and I love the fact that Hannah’s class is called “Mrs. May’s Monkeys”. I mean, seriously meant to be…our Monkey already fits right in! 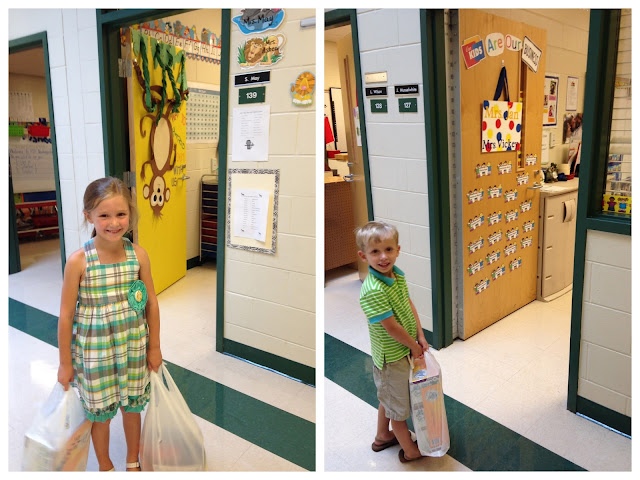 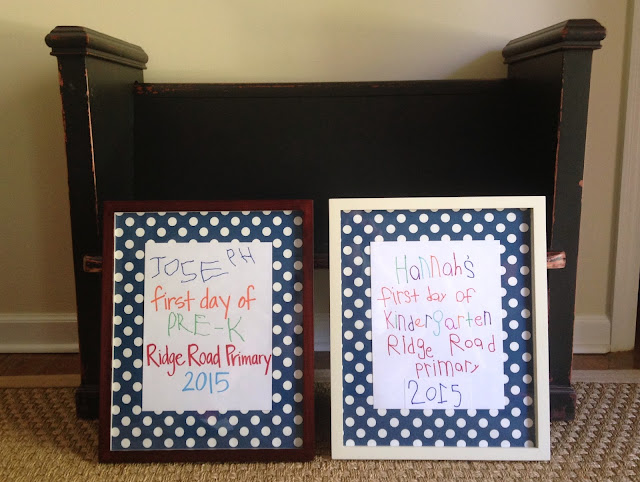 We made the first day of school signs and had them in their frames and ready to pose with on the steps. Hannah did this last year as well. This year she did the sign completely by herself, me only helping with some of the spelling. Joseph wrote his name and Pre-K.

Like we did for Hannah’s, we used a frame from Joseph’s bedroom wall, and mounted a white sheet of paper on the same wrapping paper we used for Hannah’s frame. 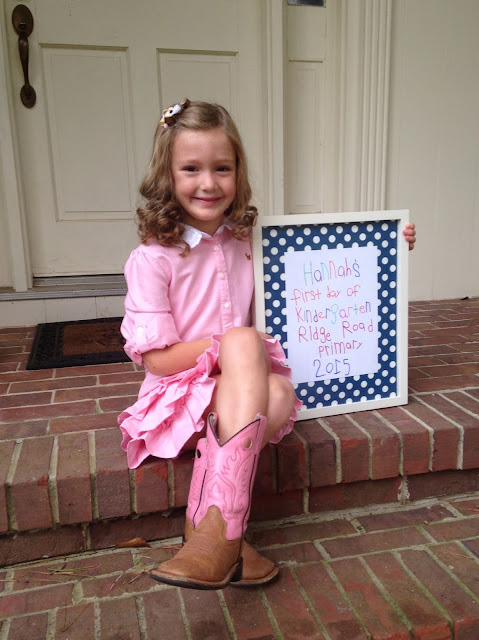 Goodness gracious, how cute is my baby girl?! Those curls! Hannah asked me if she could have curly hair on the first day of school. As long as she was fine with sleeping in sponge rollers than I couldn’t say no to that request. I chose the pink dress, to which she (of course) agreed. She chose the boots. 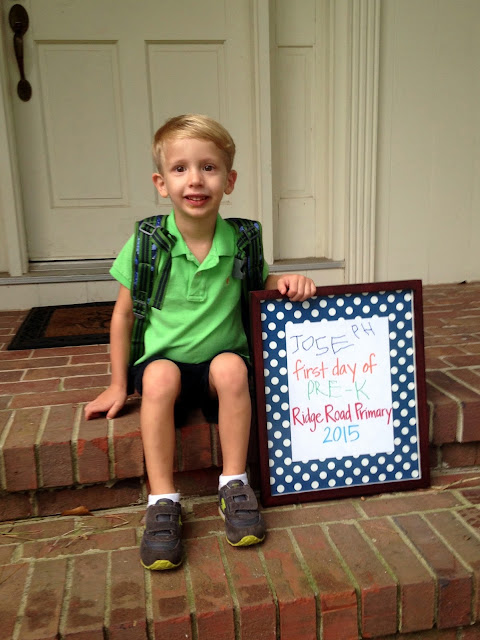 We almost made it to the front steps in the outfit I had laid out the night before… Not a problem, we have several solid colored shirts waiting to be worn. He had his hair cut the day before and looks too old! And he is crazy about his PBKids dinosaur bones backpack from Meme.

All four of us hopped in the car and rushed off to school. No matter how well I planned for the first day, it is just plain chaotic. I woke up early. Joe had breakfast ready: scrambled eggs and cinnamon rolls. Book bags were ready, drink cups and snacks organized. And still we were about 5 minutes late.

However, when we got to school, everything was chaotic so it was fine! There were cars and people everywhere – a lot of excitement and a lot of tears (not ours). 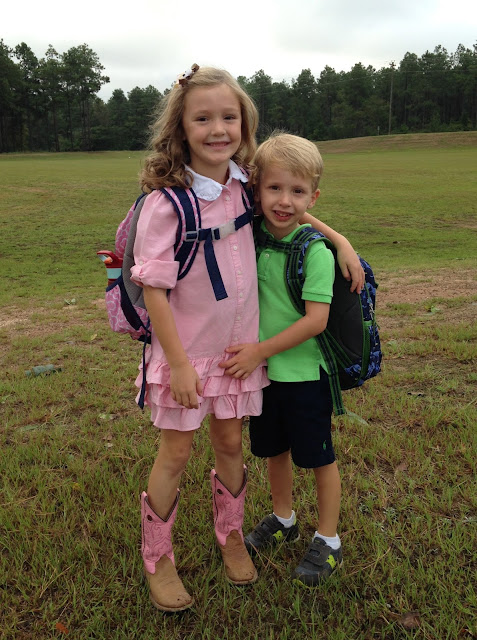 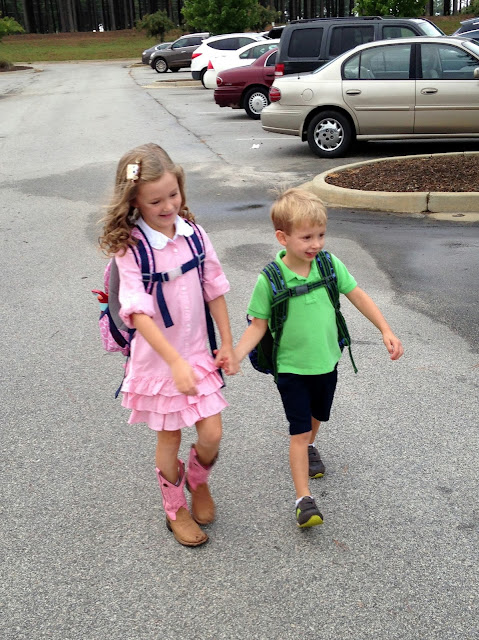 Soooooo love those two.  She is all excited about kindergarten and watching out for little brother, and he is all about pre-K and seeing some of his preschool friends again. He is not worried about a thing, we soon learn.

We walked them to their rooms. Hannah gave sweet hugs, Joseph barely said goodbye. Joe and I hung around for a bit and saw Joseph’s class walk to the cafeteria for breakfast. We were going to hit the exit if he seemed upset, and if not we would wave and leave. So funny: he was walking in his little line and when he saw us, he almost acted embarrassed, tilting his head back and throwing his arm in the air! Don’t have to worry about him! {Which is a relief when several in his class have been crying in the mornings.}

There were no tears, even from me! Last year was such a big adjustment with our first child in all-day school, the first day was emotional for Joe and me. This year everyone was so excited and I am so happy to have them at the same school again.

At their school you can either wait in the pick-up line (which was really really long on the first day) or you can park and walk up (many people chose that route too). Joe wanted to go with me but couldn’t get away, so I walked up and claimed my cuties.

Their smiles tell you how the first day went: 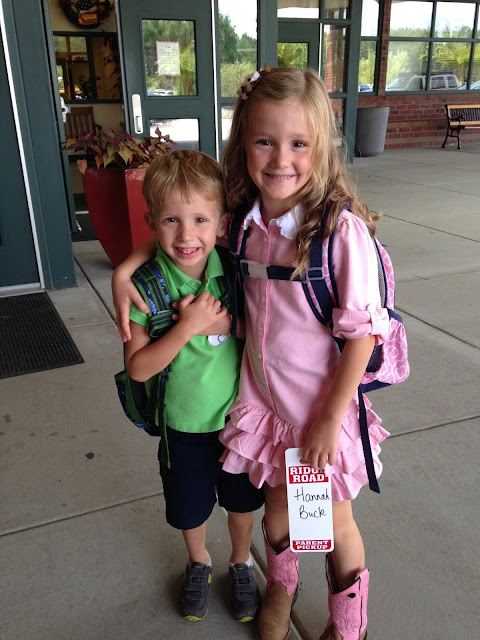 “It was AWESOME!!!” The only negative thing said about the first day was when Hannah told me she didn’t get to see Joseph at all. It didn’t seem to bother him, in case you were wondering. She enjoyed her first day and likes her new classroom.

Hannah and Joseph will most likely see each other in the halls. Kindergarteners leave their classroom to eat breakfast on their own eventually, but for the first two weeks they’ll eat as a class. Joseph will eat first thing with his class. They might see each other then. Recess times have changed this year and they will not likely see each other on the playground. Sad about that; they were looking forward to playing together. Their lunch times overlap so we might try, on occasion, to eat with them together then.

Eating at school brings on a-whole-nother subject. Will Joseph eat? and if he does, what will he choose to eat? Hannah is a great eater. She eats most anything and eats it pretty fast. She’s had no problem at big school. On the contrary, Joseph is kind of picky about textures and is more of a leisurely eater. Let me just say it plain…he is slow. We figure he might starve for the first few weeks, but he’ll figure it out. We learned on day one that Joseph cannot have a sit-down breakfast at home.

On the first day, he ate at home and then had another breakfast at school. I’m not sure he ate any lunch. On day two, Monday, when we picked him up from school, Joe asked “What did you have today?” Excited and energetic, he answered “I had chocolate milk for breakfast…and I had chocolate milk for lunch!!!!!” Yesterday, I was there as he was getting his breakfast from the line. He had French toast sticks (I encouraged him to get plain milk). For lunch he ate “some of my corn, my applesauce and a chocolate chip cookie!!” Progress!

Oh the fun this year has in store for us!

« at summer’s end
catching up (including baptisms and braves game) »