It’s been a fun week finishing school, and we’ve been busy with parties and end-of-year activities and events. But before I post a wrap-up, I must record what happened last Sunday.

“All God’s Critters” aka the cherub choir at church performed dressed as animals ranging from the small (a ladybug and a cricket) to the large (an alligator and an elephant). Some costumes were store-bought and others were homemade. Some were simple and others were elaborate. All of them together were cute as could be and it was quite a show during worship. 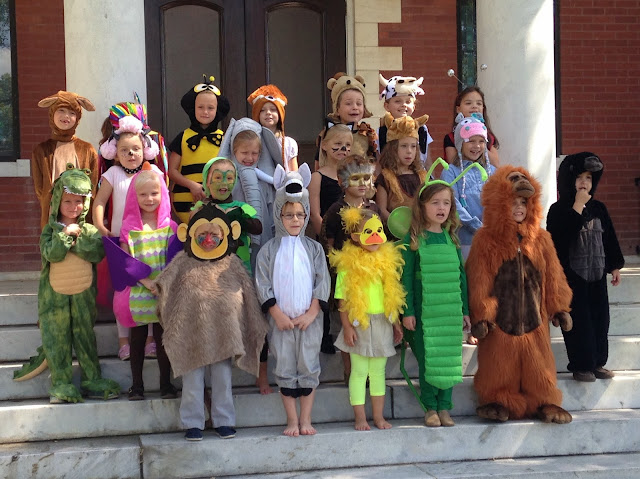 A couple of weeks ago during practice, the children drew animals. Hannah was to be a bullfrog. Joseph was to be a baboon. I wasn’t buying new costumes, so obviously they were going to be homemade. And cheap. Challenge accepted. Meme and I put our heads together and came up with these: 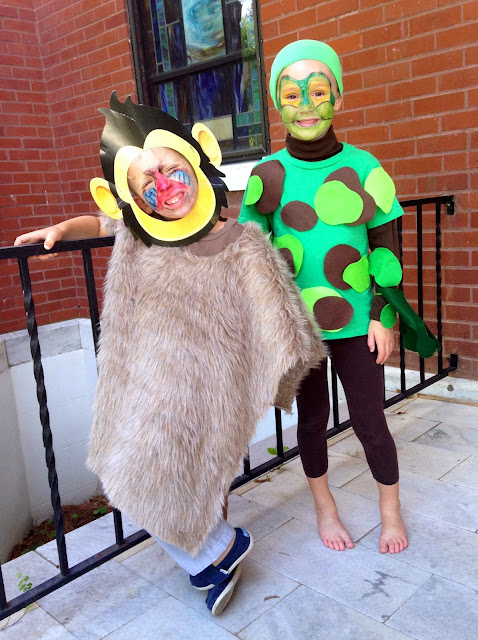 Unfortunately our baboon was not happy, but they looked cute!

So what we did… My mom found the furry fabric in Savannah and we used a monkey mask from Hannah’s two-year-old preschool program that was clipped up on the clothesline (artwork line) in the playroom. For Hannah we cut out and taped frog spots and Meme made frog hands and tied them around her wrists. I used a green tank top of mine to wrap around her head.

Facepaint. Both kids were very excited about having their faces painted. In fact, when we looked on Pinterest at DIY masks, Hannah was sure, positive, adamant, about wanting her face painted instead. Joseph was going along with his sister. Then comes Sunday morning.

I allowed about an hour to do their faces. About two minutes into doing Hannah’s, she started to fall apart. “It itches! It iiiiiitcccchhesss! I don’t waaant to dooo thiiiiiiis!!!!” Lots of whining. Well, Momma wasn’t caving. {You wanted your face painted. I bought face paint. You’re getting your face painted. So, sit still!!} There wasn’t a whole lot of compassion. The clock was ticking and I needed to get my frog and baboon to church!

Once they got over that weird, itchy feeling of the majority of their faces being painted, they were ok. {And I sorta get it, it’s an icky feeling at first.} 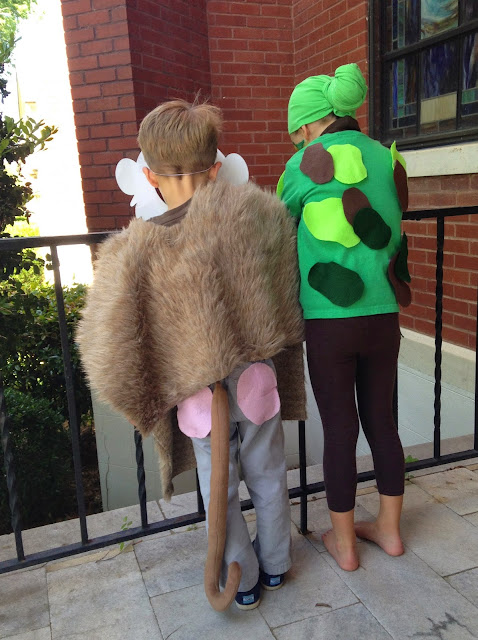 However, soon after dressing in costumes (and right before worship started), my baboon had a meltdown. This was the best attempt at a smile: 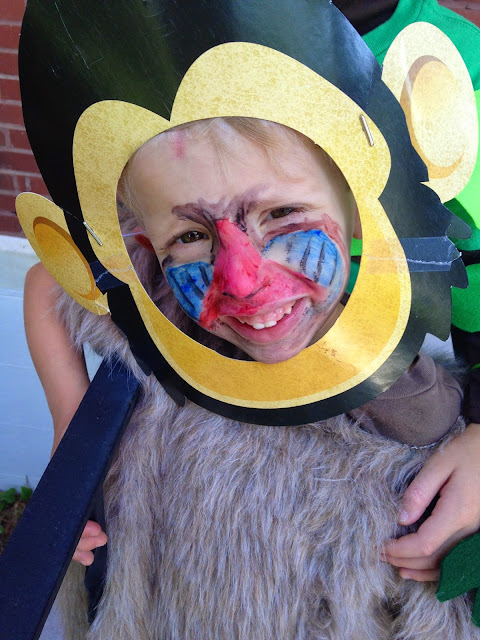 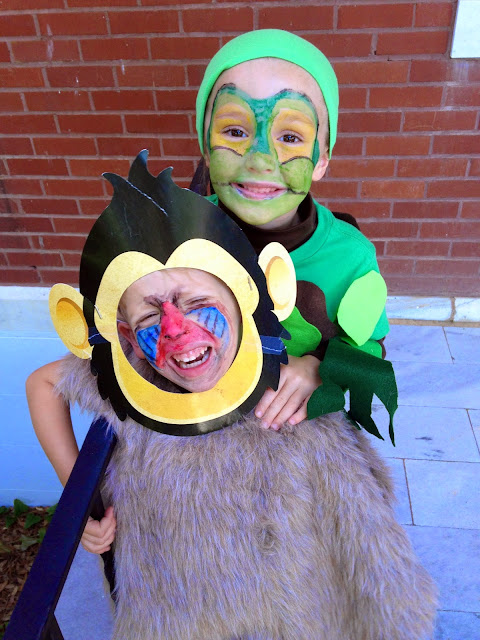 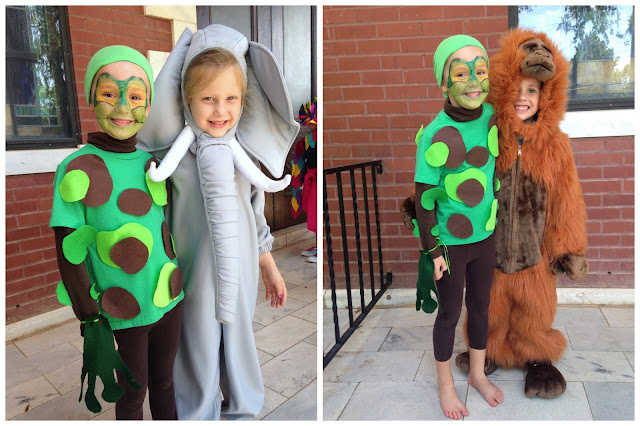 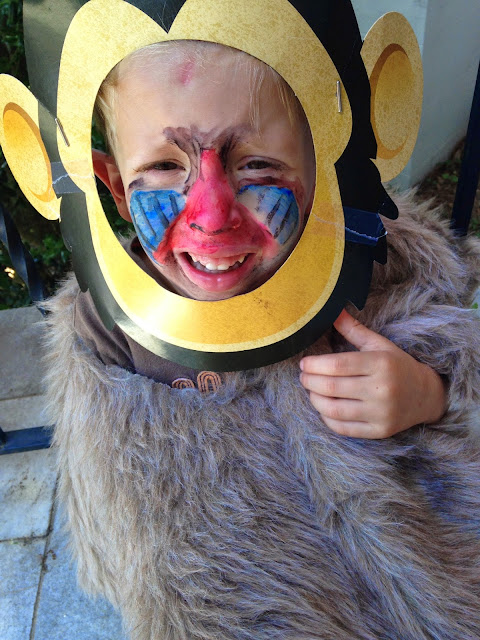 Time to perform! They sang “The Animal Fair”, “All God’s Critters”, and “Who Built the Ark?” 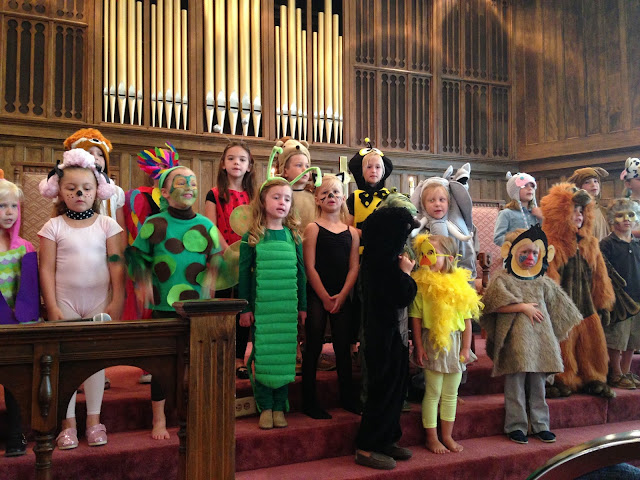 Look at my sweet and animated bullfrog and my very sad and quiet baboon! He was even the star of the first song…

“…the big baboon, by the light of the moon…” 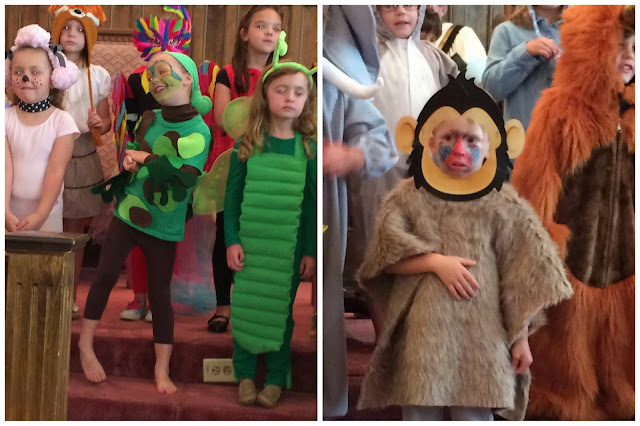 “All God’s Critters” was their favorite song. We sang it A LOT in the two weeks leading up to their performance. Joseph knew the words to everything they sang, he just decided not to share them with the church.

Joseph came around…after it was all over. Meme was there, we were in the front row, and it’s all on video. We’ve talked about our sad little baboon a lot. I think he’s in between embarrassed and thinking it’s funny…

We went to one of three usual places for Sunday lunch, Subway. The kids liked how Joe and I matched, so they each had to take a picture of us. 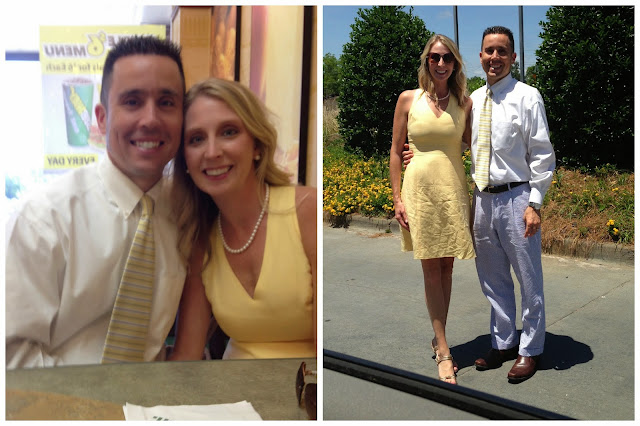