This past weekend we were in Savannah for the Critz Tybee Run Fest. We drove into town on Friday afternoon and then, a bit later, on out to Tybee Island to pick up Joe’s race packet. Hannah wanted to come along and I’m glad she did… 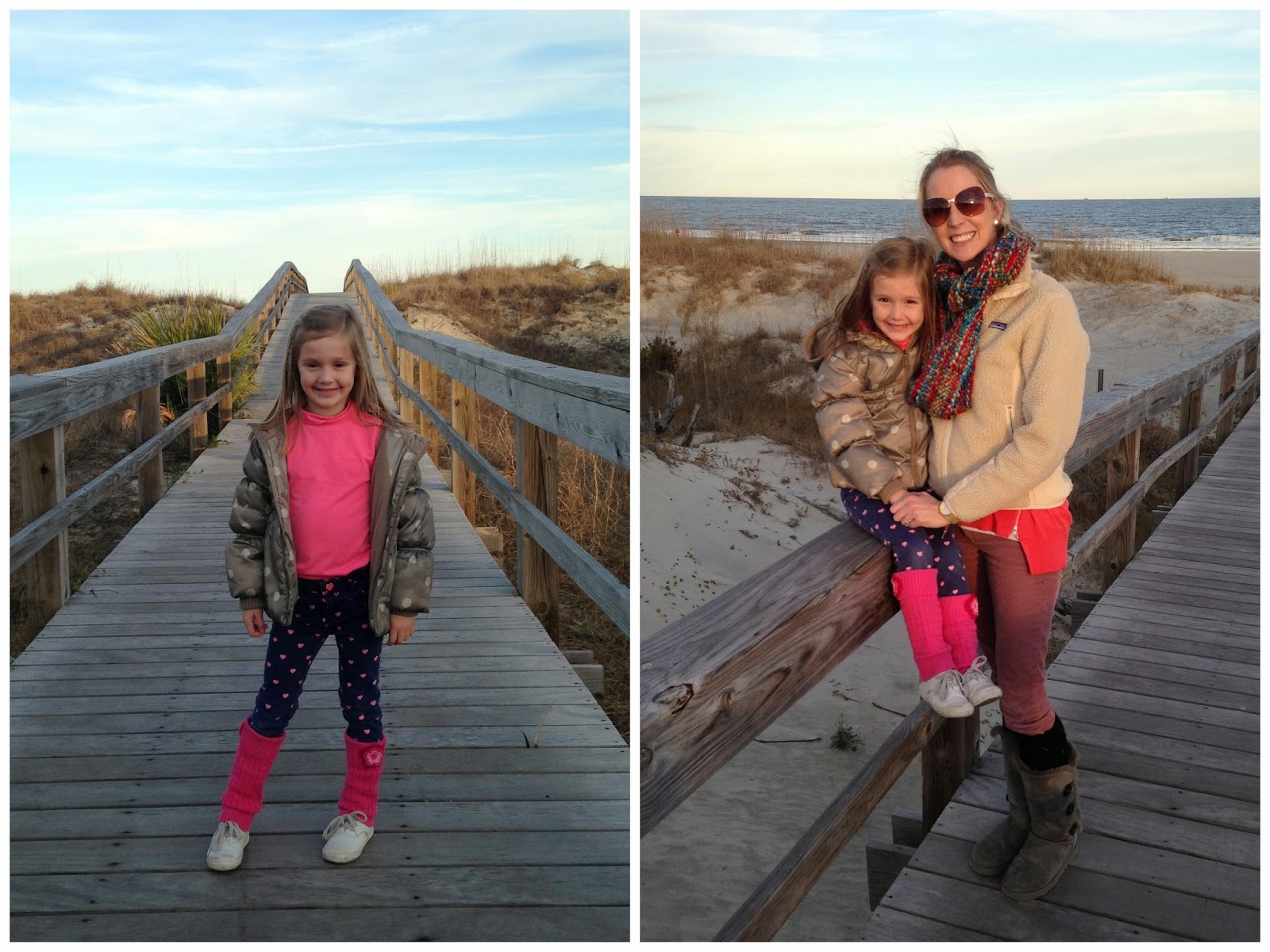 We got to have a few sweet moments on the beach with our girl. 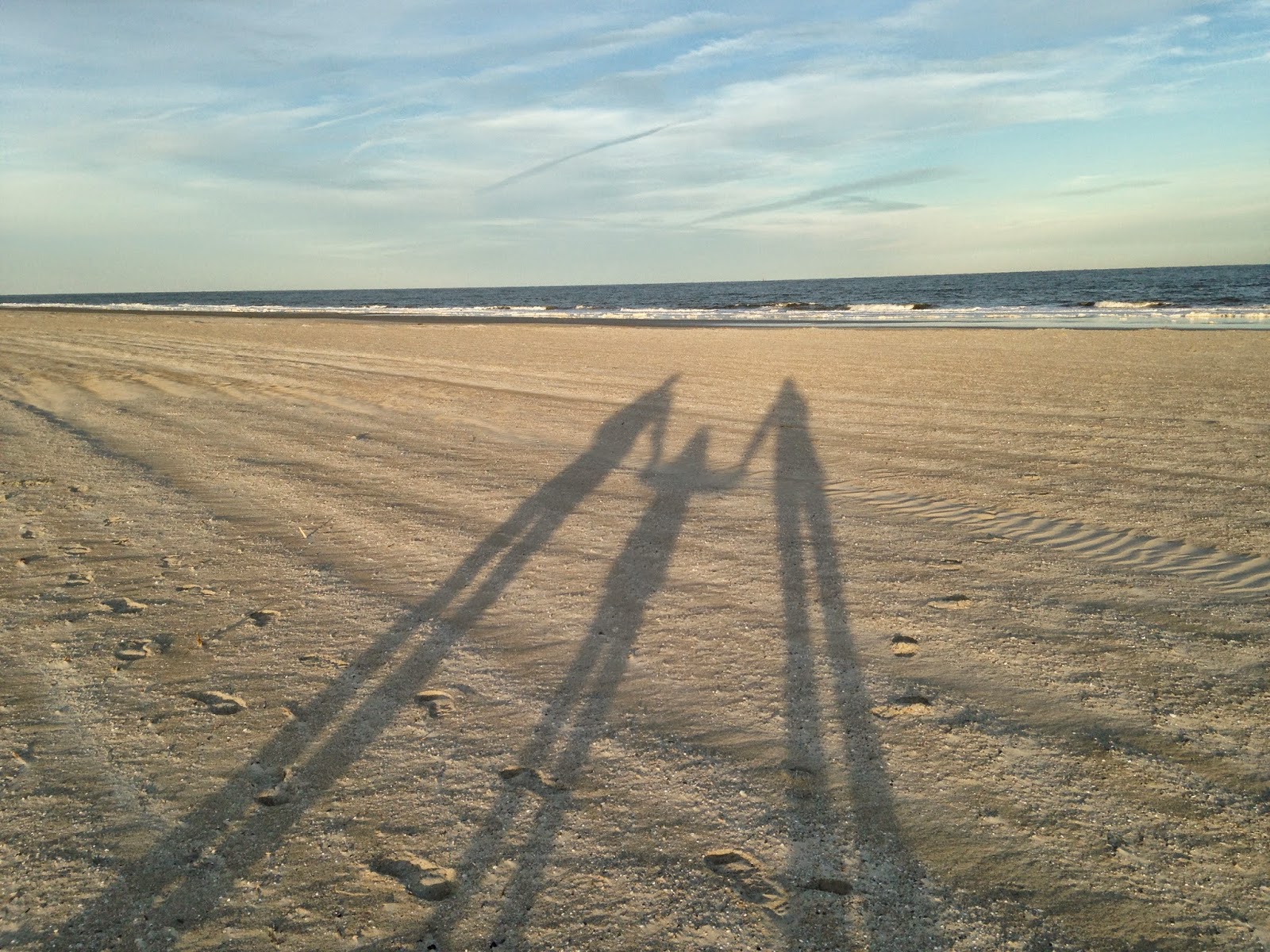 Saturday morning started early, but both kids were up and dressed in a hurry. Obviously, we had to stop at Krispy Kreme on our way to the beach. I was very disappointed that there were no hot doughnuts ready, but we settled for some of these: 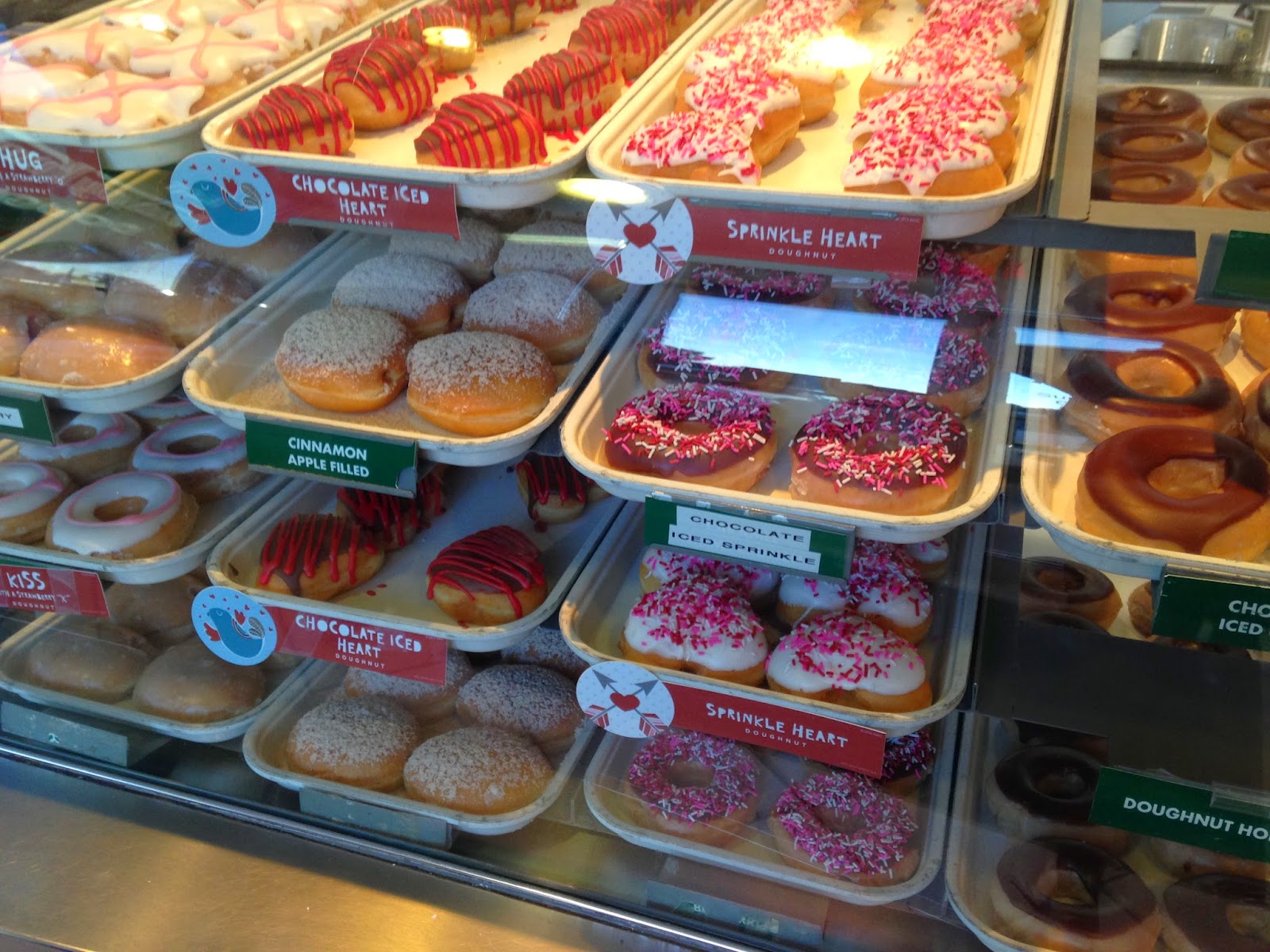 The race website advised us to arrive before the 7:00am start of the 10K due to parking and street closures, but we decided we’d take the risk. The half marathon start time was 8:30 and we were going to take advantage of a little extra sleep. We got out there around 7:40, found a great parking spot on 13th Street, and bundled up before heading over to the starting line. 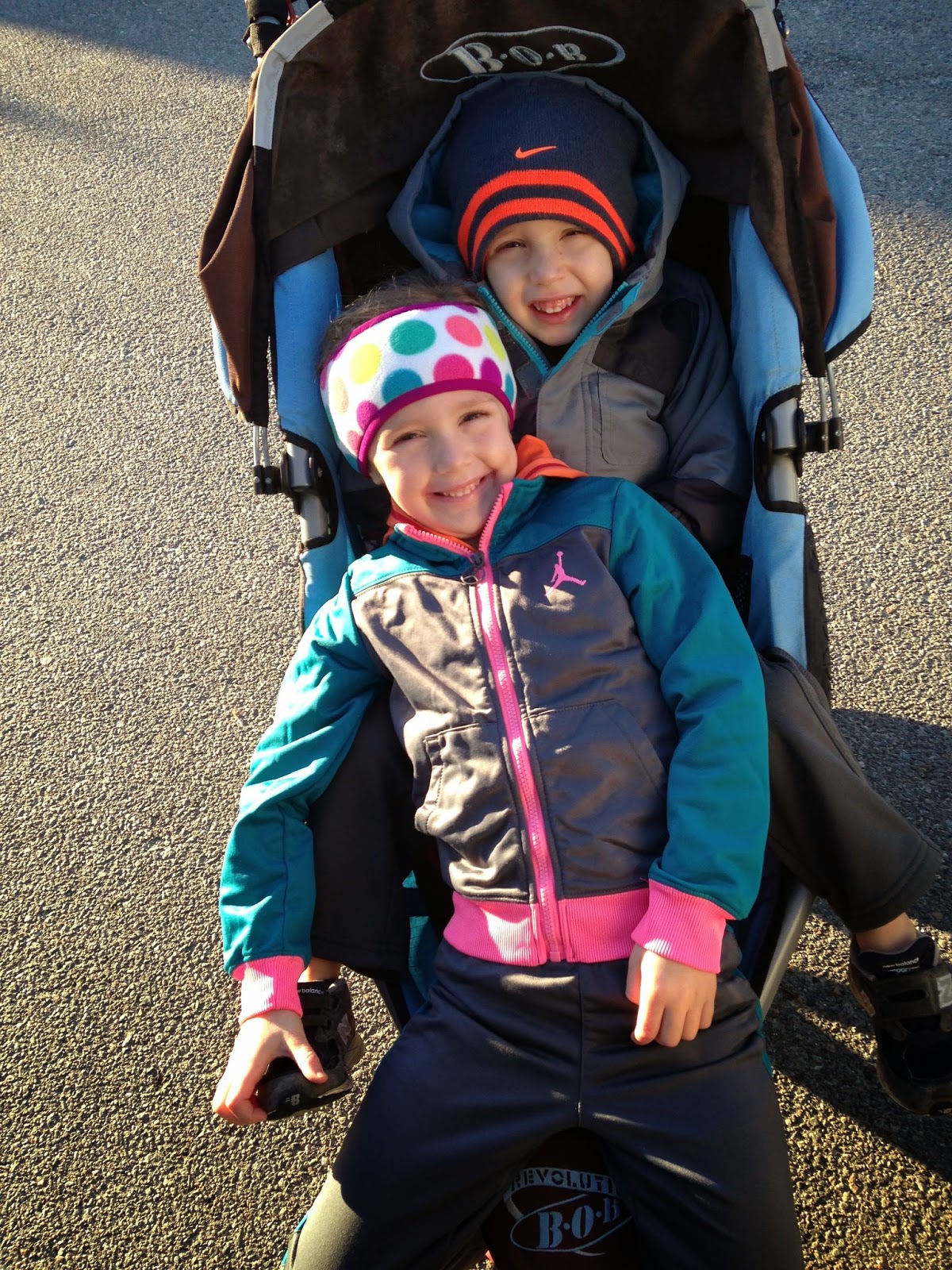 Contrary to what we were expecting, it wasn’t too cold. Hannah shed her coat almost immediately and I soon followed suit. The weather was incredible and both kids were so excited! 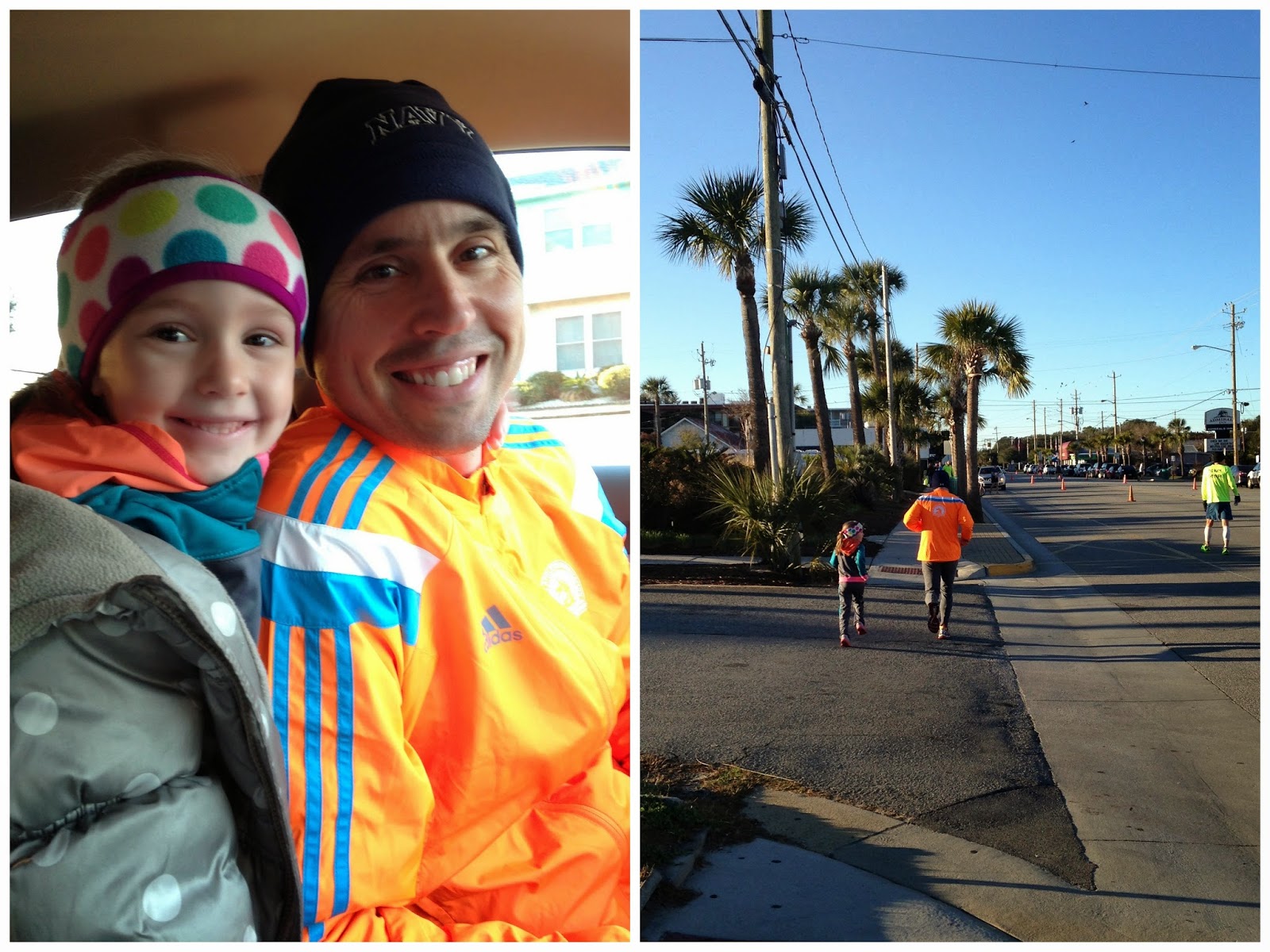 Love this video of them warming up with Daddy:

I had my phone in one hand taking pictures and Joe’s phone in the other taking a video of the start. Hannah’s cheering is awesome… 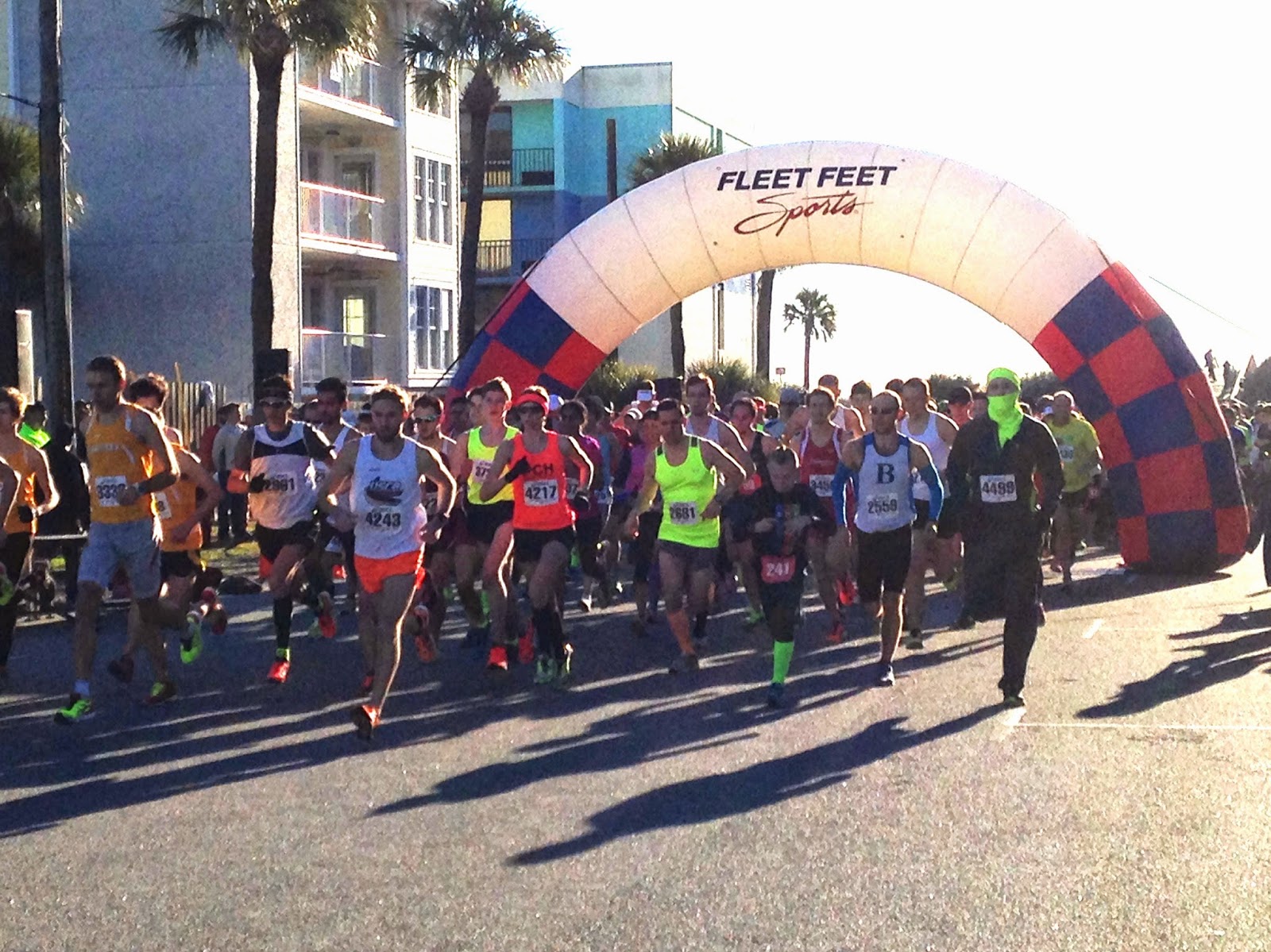 While we waited for Joe to run the first half of the course, we took a walk down the pier with Gran Gran and Poppy who also came to watch. 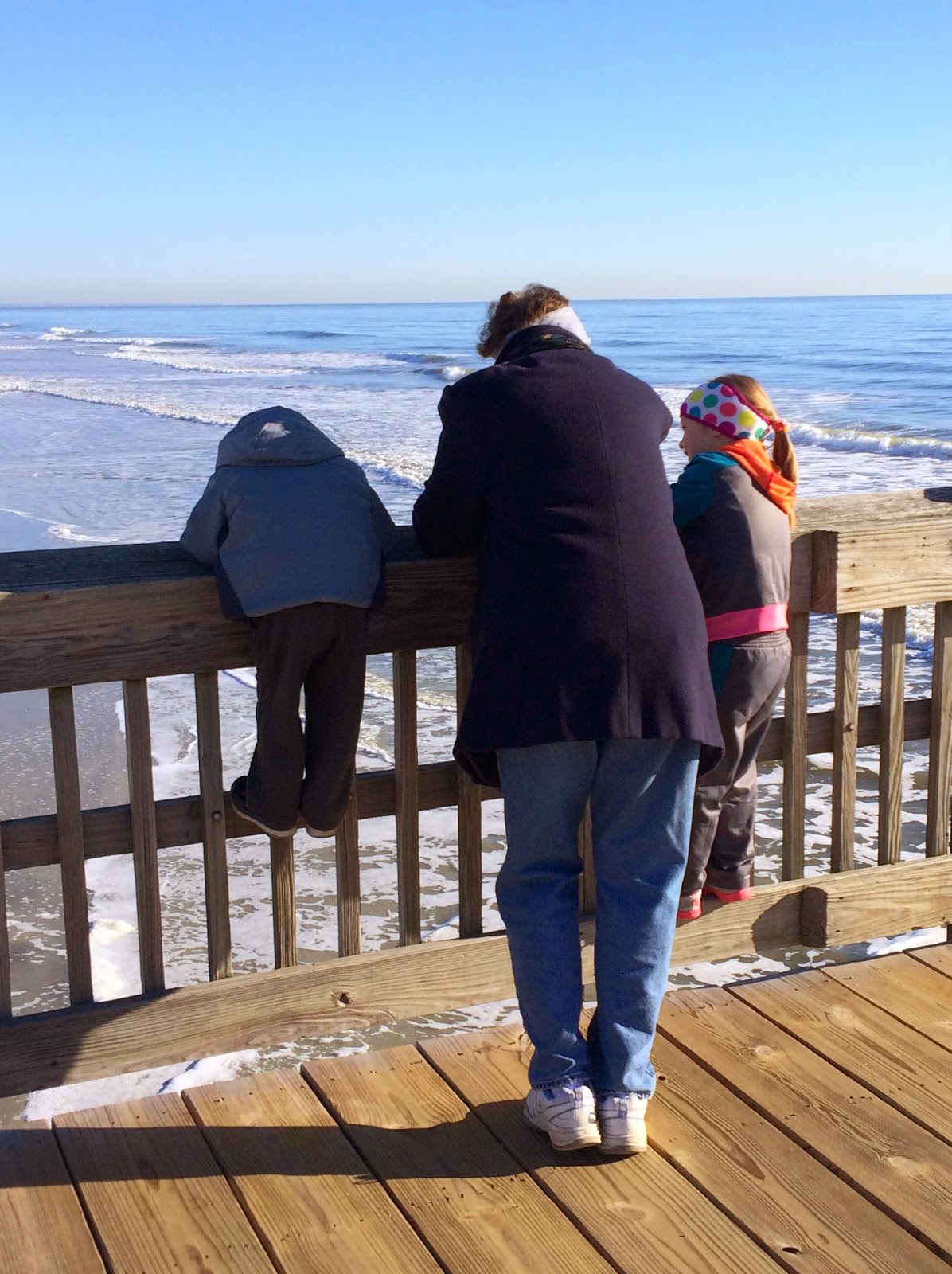 There were a bunch of surfers out in the water which was fun to see. 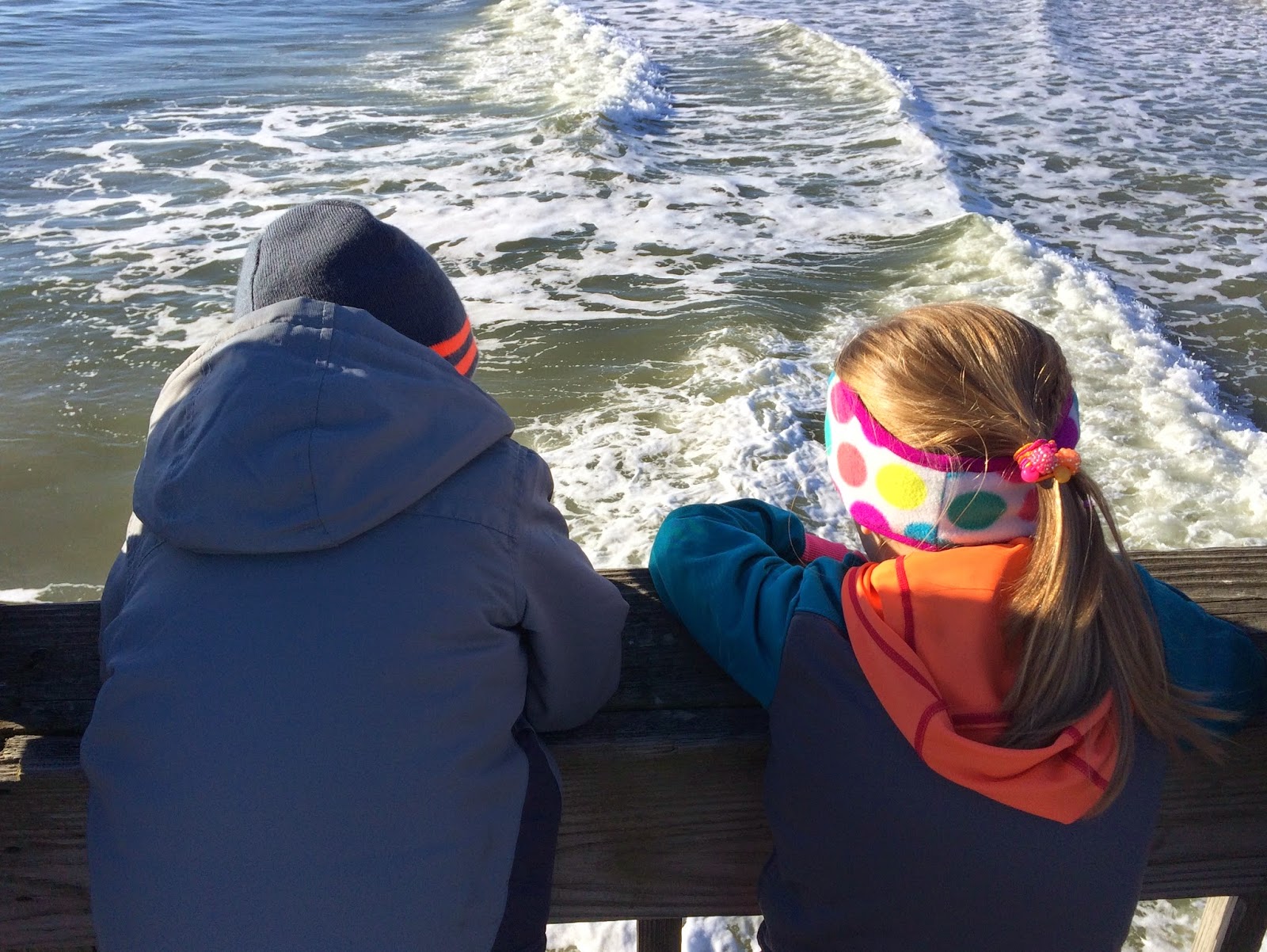 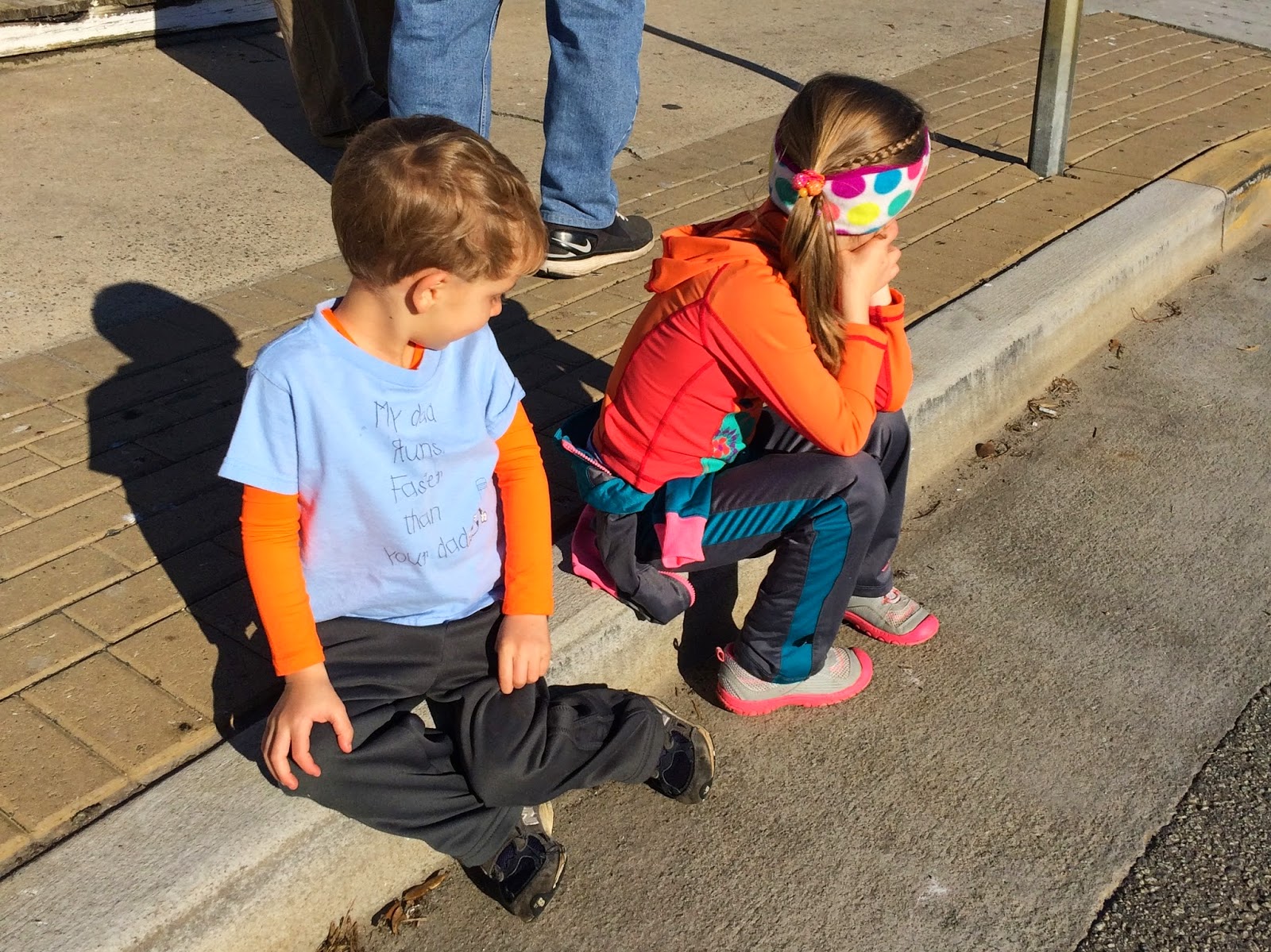 We found a spot on Butler Avenue to see Joe at the 7 mi mark. I encouraged him to wear his new (loud) neon singlet that I got him for Christmas and so glad he did – you could see him coming from a long ways off. No missing Daddy! 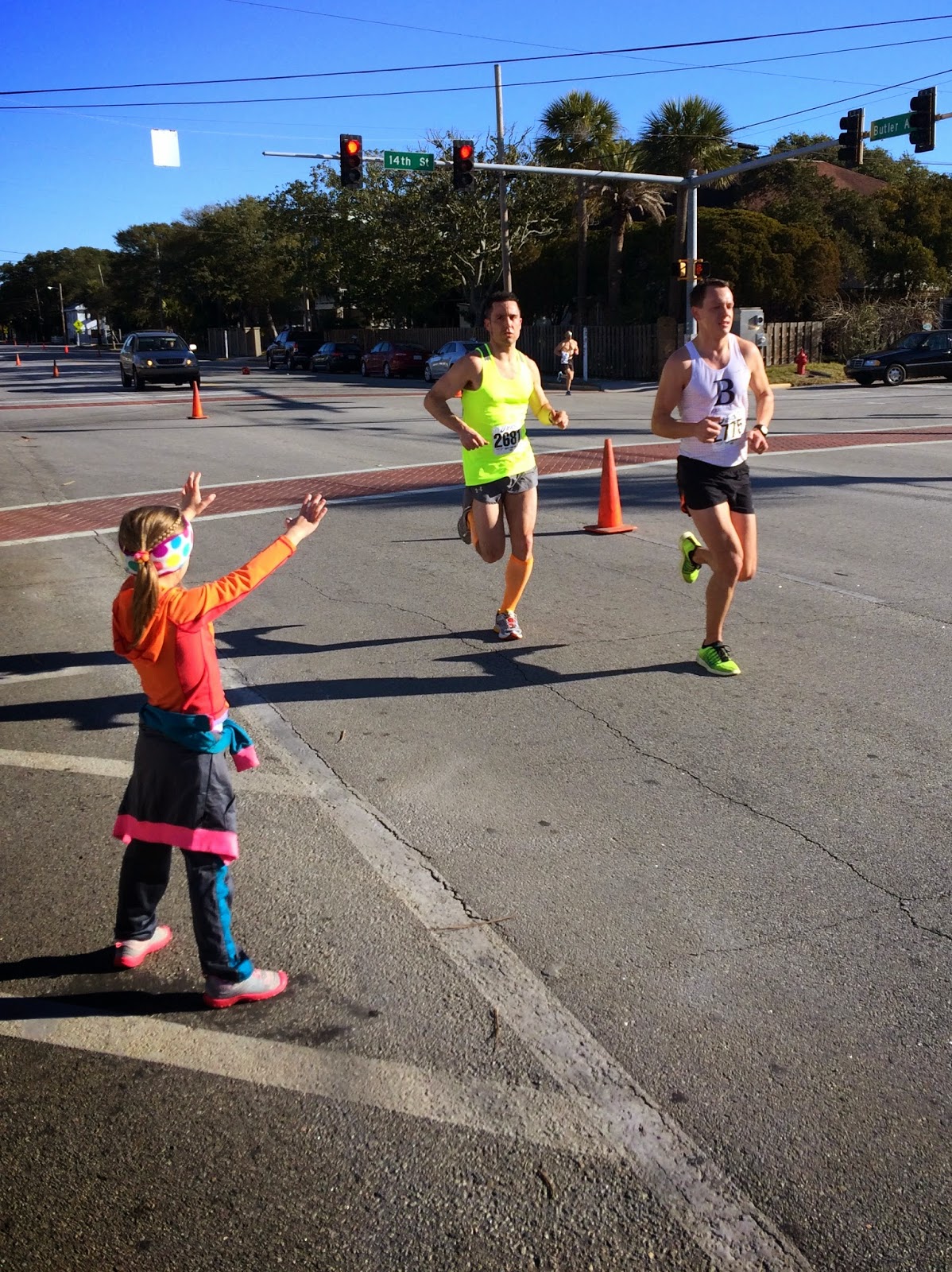 Now, let me tell you about Hannah. If you don’t already know, she gets really into these races. She loves it all and is Daddy’s biggest fan. She chose her outfit – three different layers. At the bottom was her favorite t-shirt which states “RUN FAST OR BE LAST”. That’s what she’s showing Joe in the photo below. 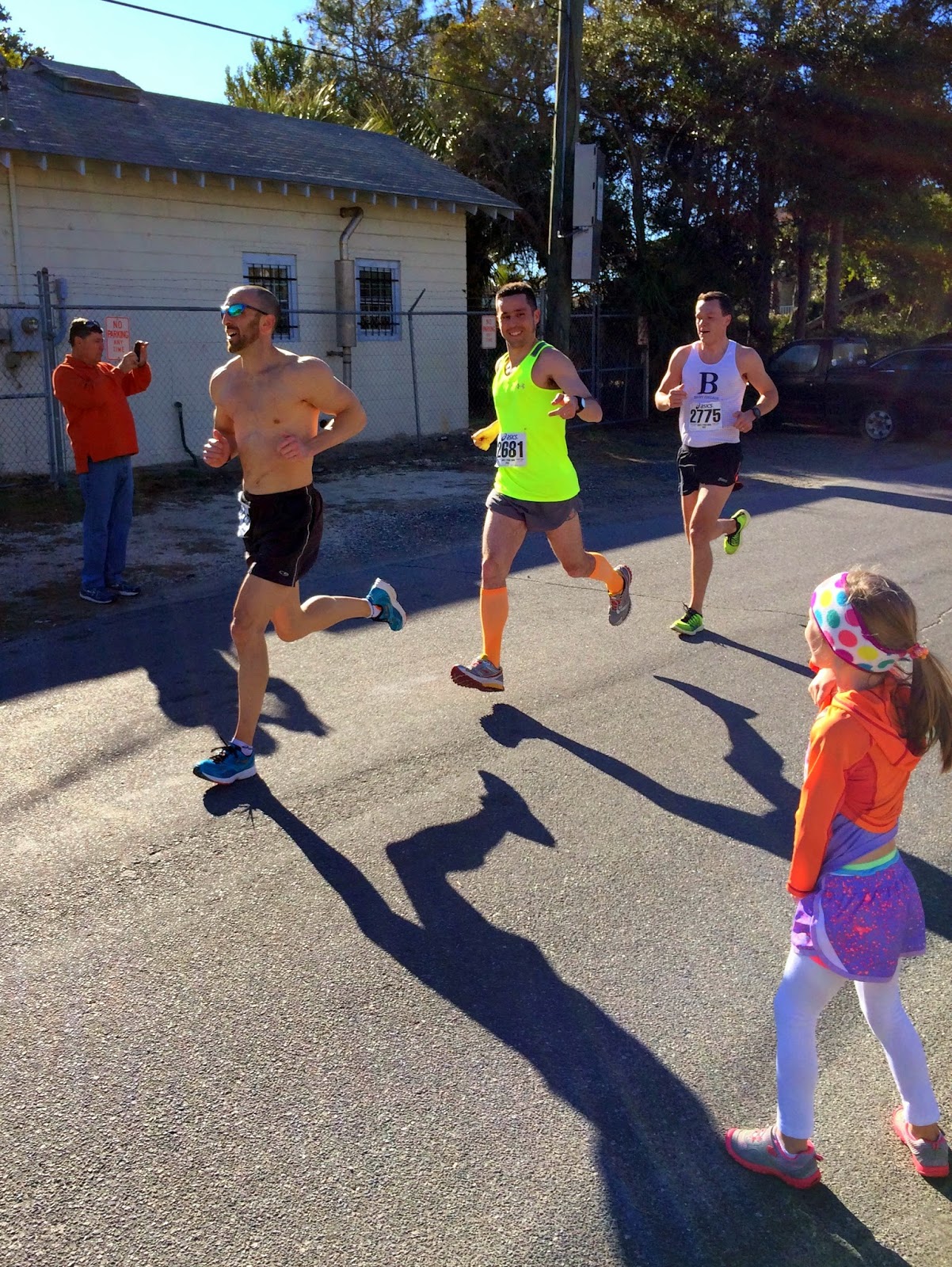 One of the other runners said to Joe, “I don’t know whose girl that is, but she sure is cute.” To which he responded, “She belongs to me. Did you see her shirt? It says ‘Run fast or be last’. You gotta train ’em early.”

Another runner that passed by us at one point called out “I hope my daughter cheers like that one day!” Hannah is such a good supporter and encourager. I love that about her. So enthusiastic and animated. And Joe loves it, giving her a thumbs up and calling out as he passes by. {Joseph cheered mostly from the stroller but he gets a shout-out, too.} 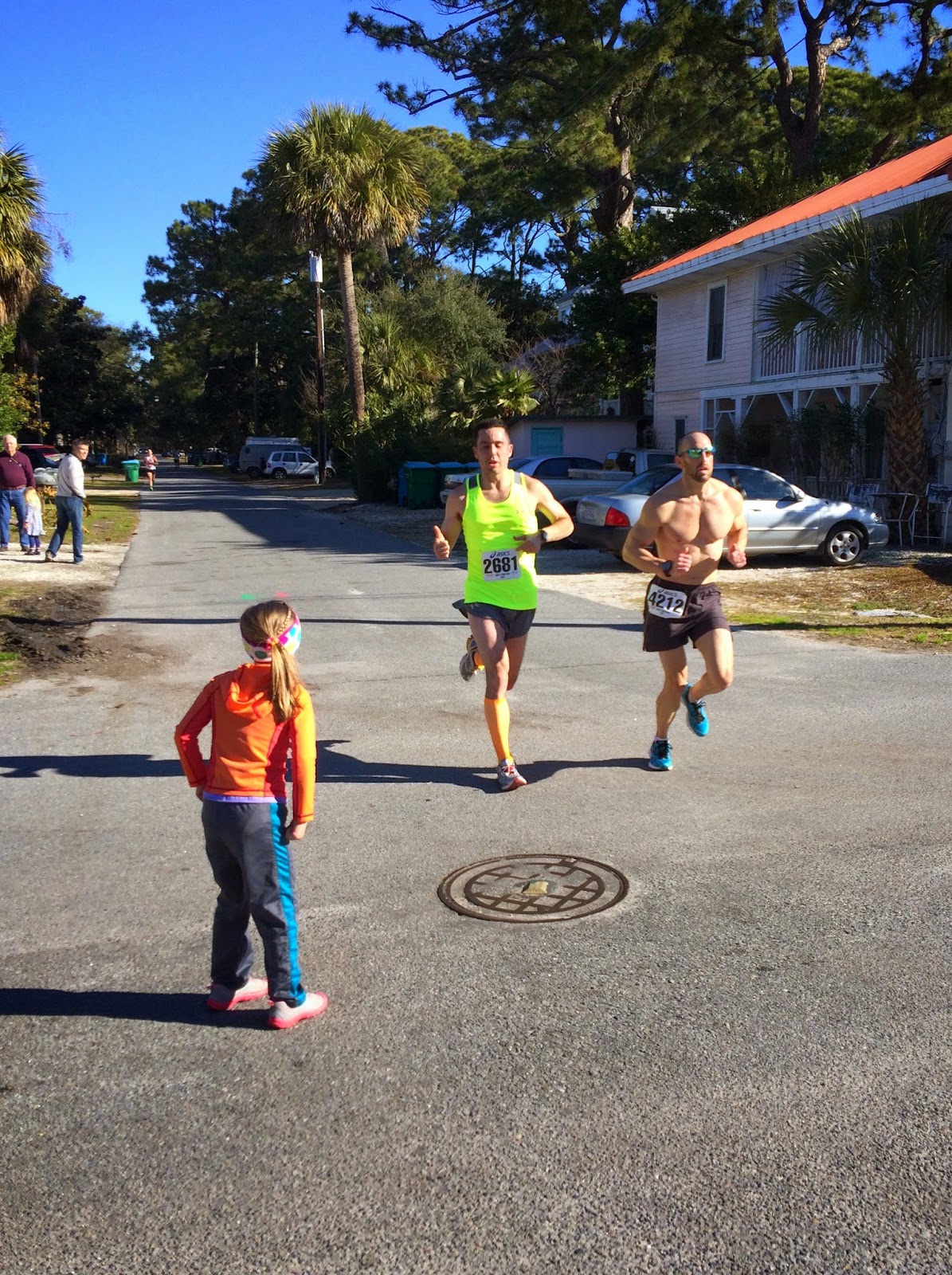 Just by walking a few blocks, we caught Joe at the 7, 9.5, and 11 mile marks. Tybee is a great race, both for runners (it’s flat!) and for spectators. The only wild card is the weather. Thankfully, the cold, wind, and rain of years past was not an issue this year. 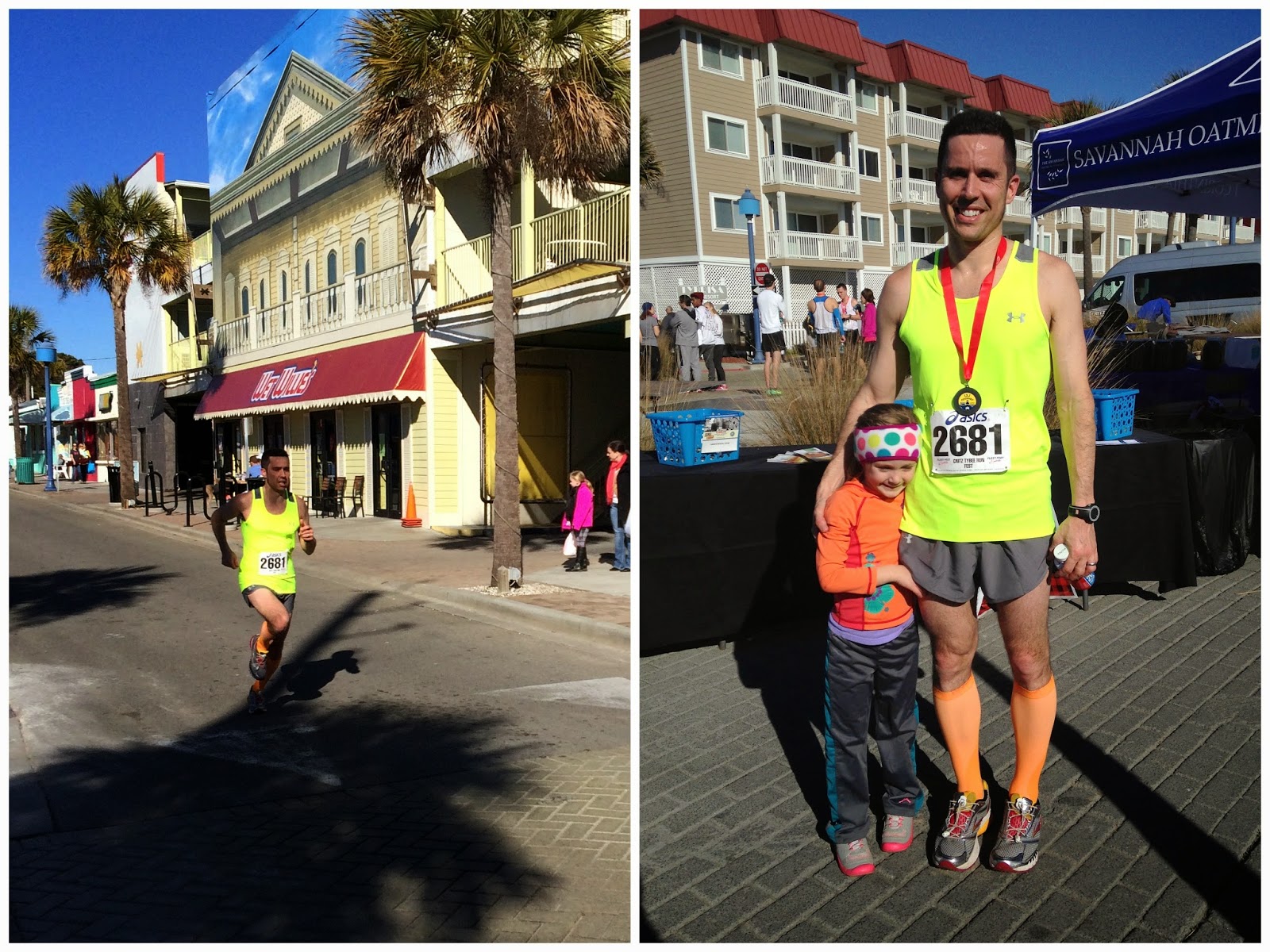 That’s him running into the finish on the left. He beat his goal of 1:25:00 finishing with a time of 1:23:13. Yay!!! With that time he qualified for the New York marathon! {As has been the case lately, he also ran with no pain!}

So excited and proud of Daddy!! 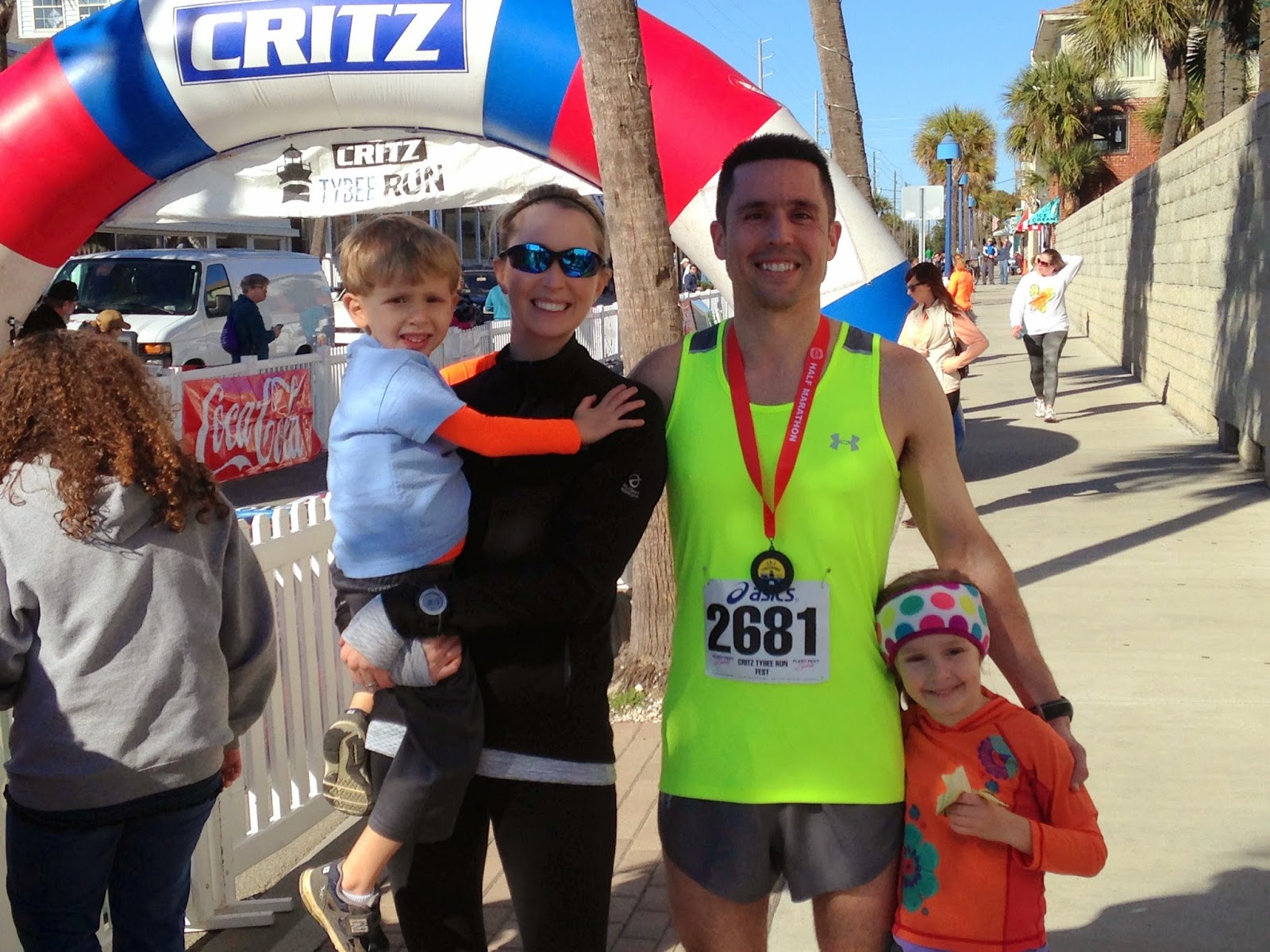 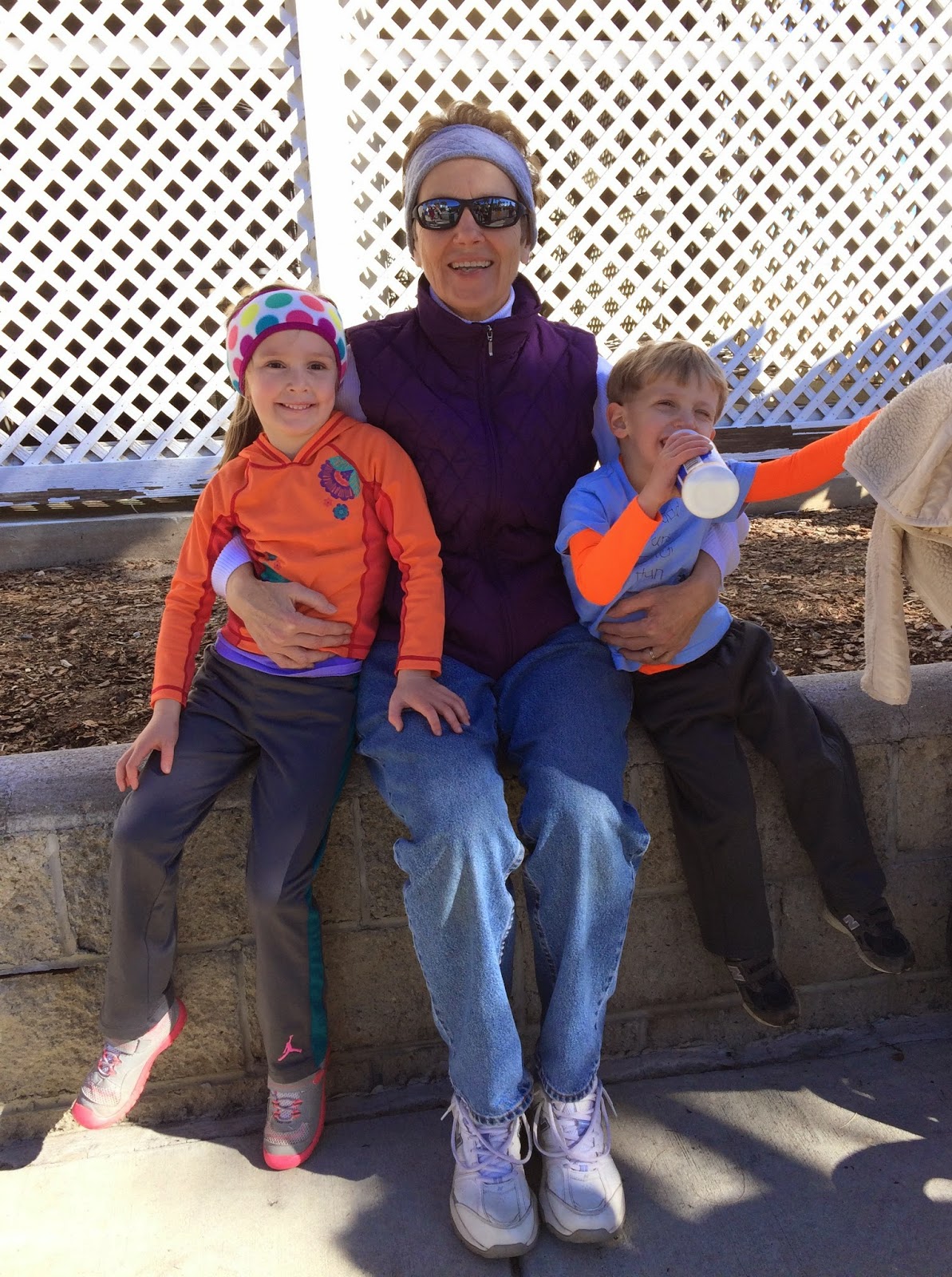 We wrapped up our morning on Tybee with a short playtime on the beach. It was chilly but sunny and Hannah and Joseph had a ball playing on the sand. 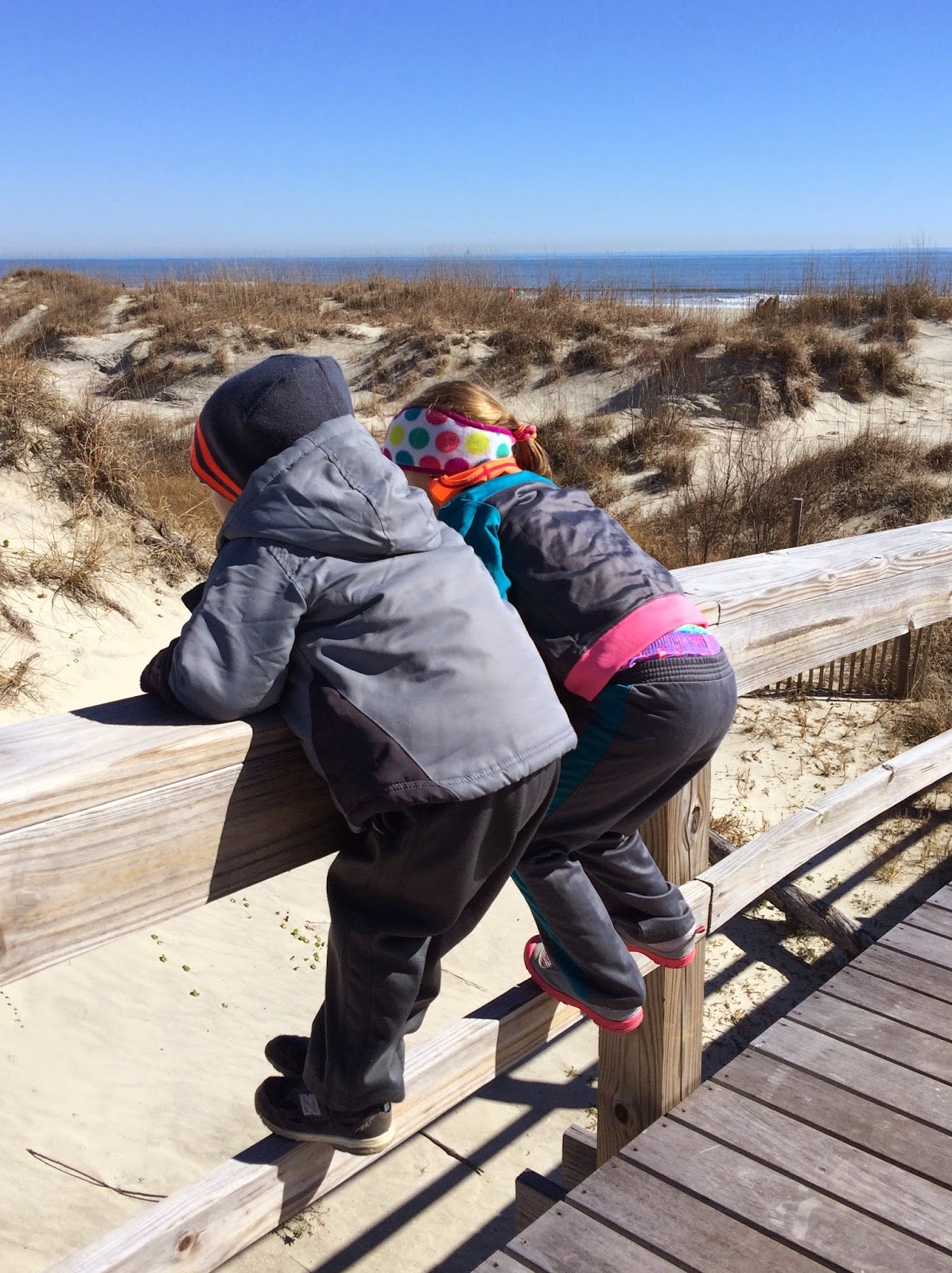 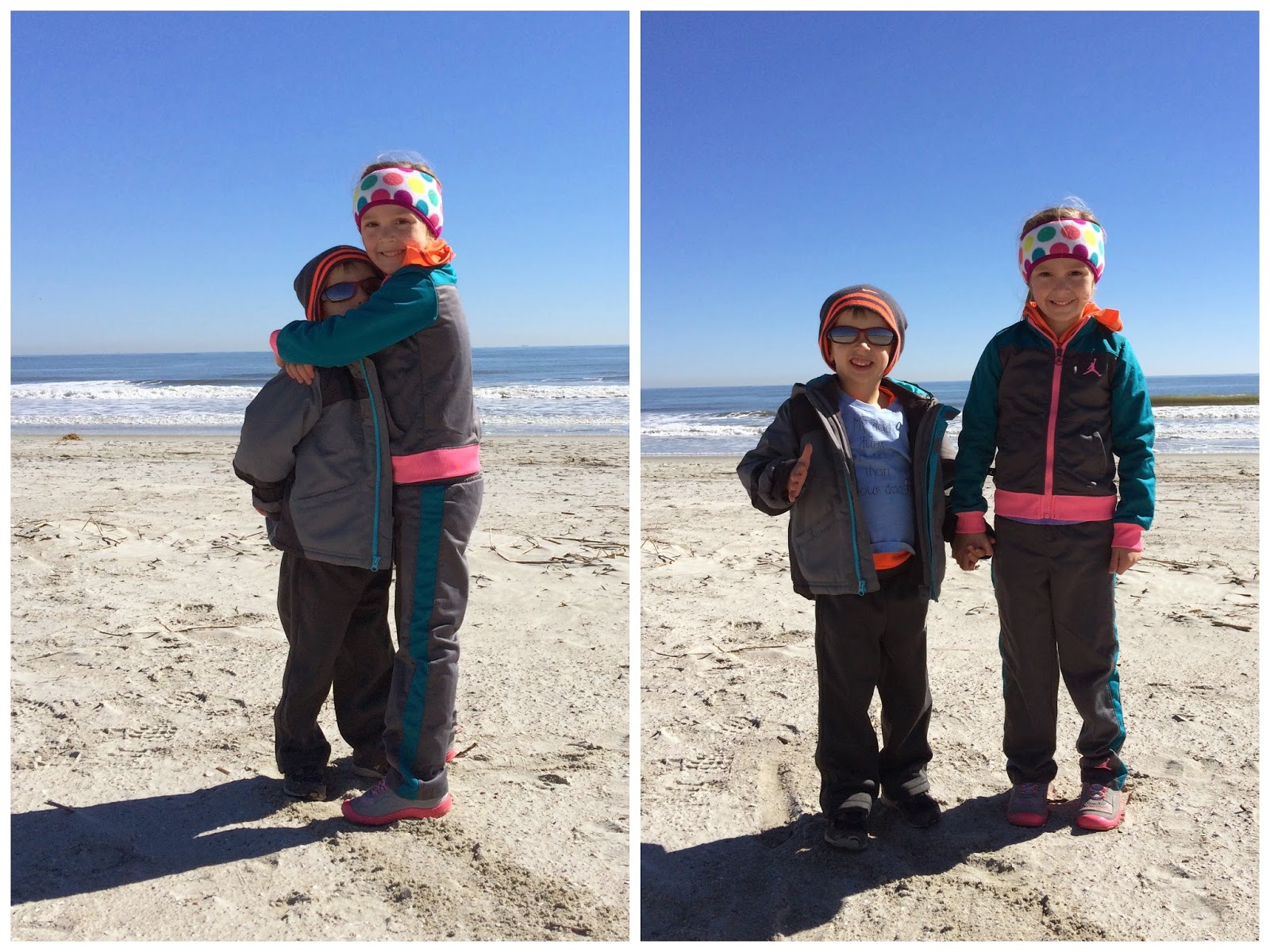 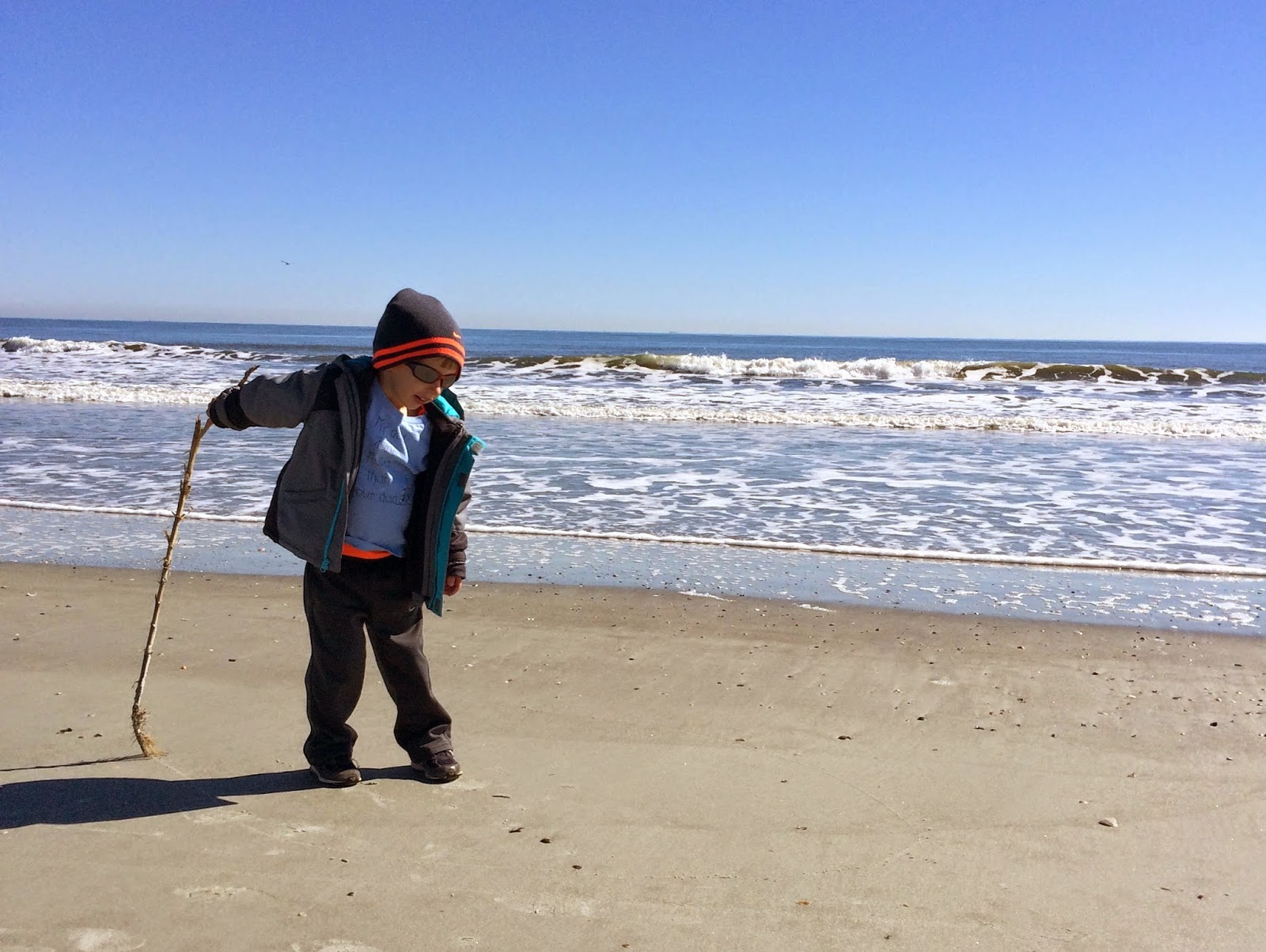 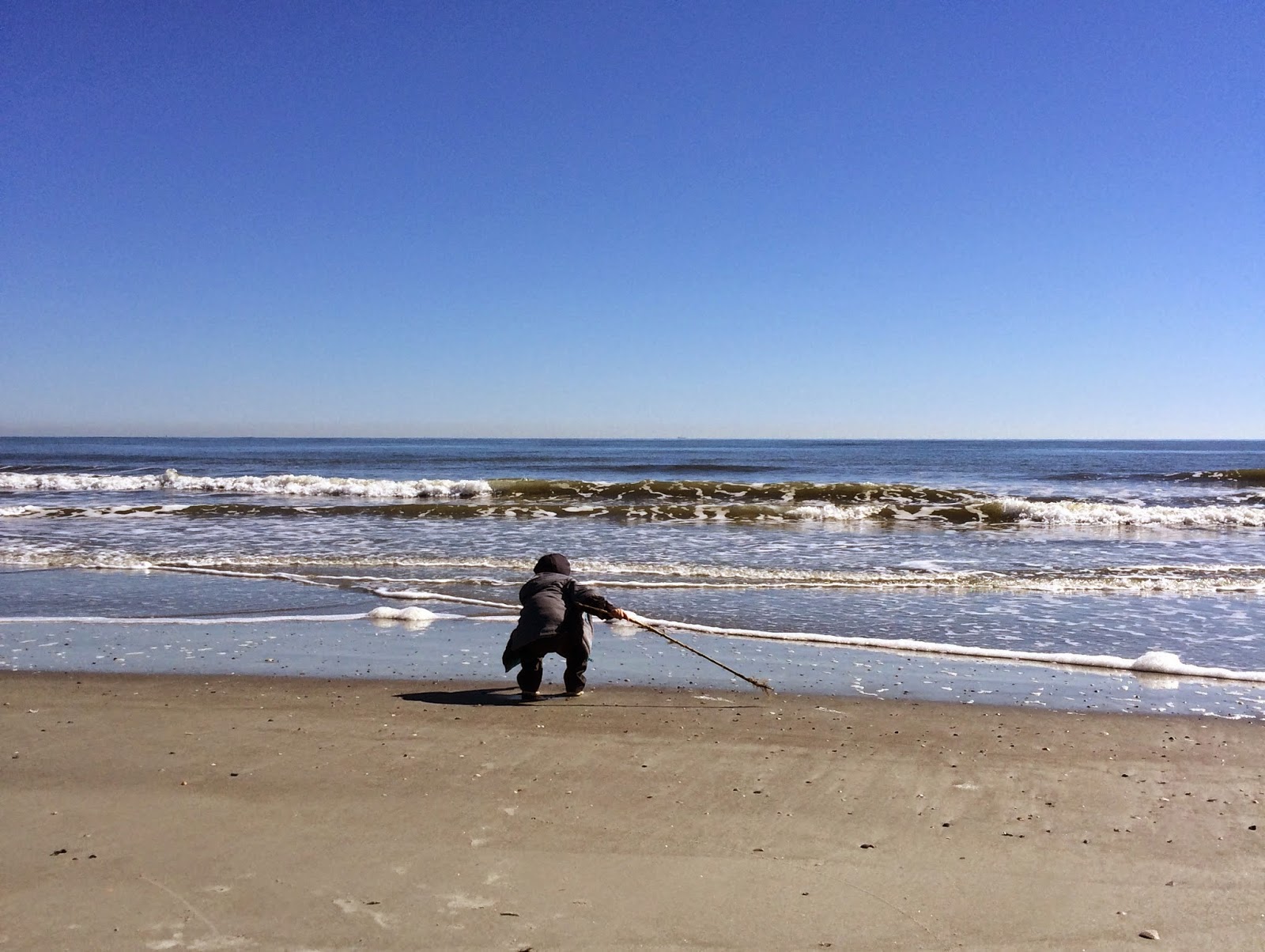 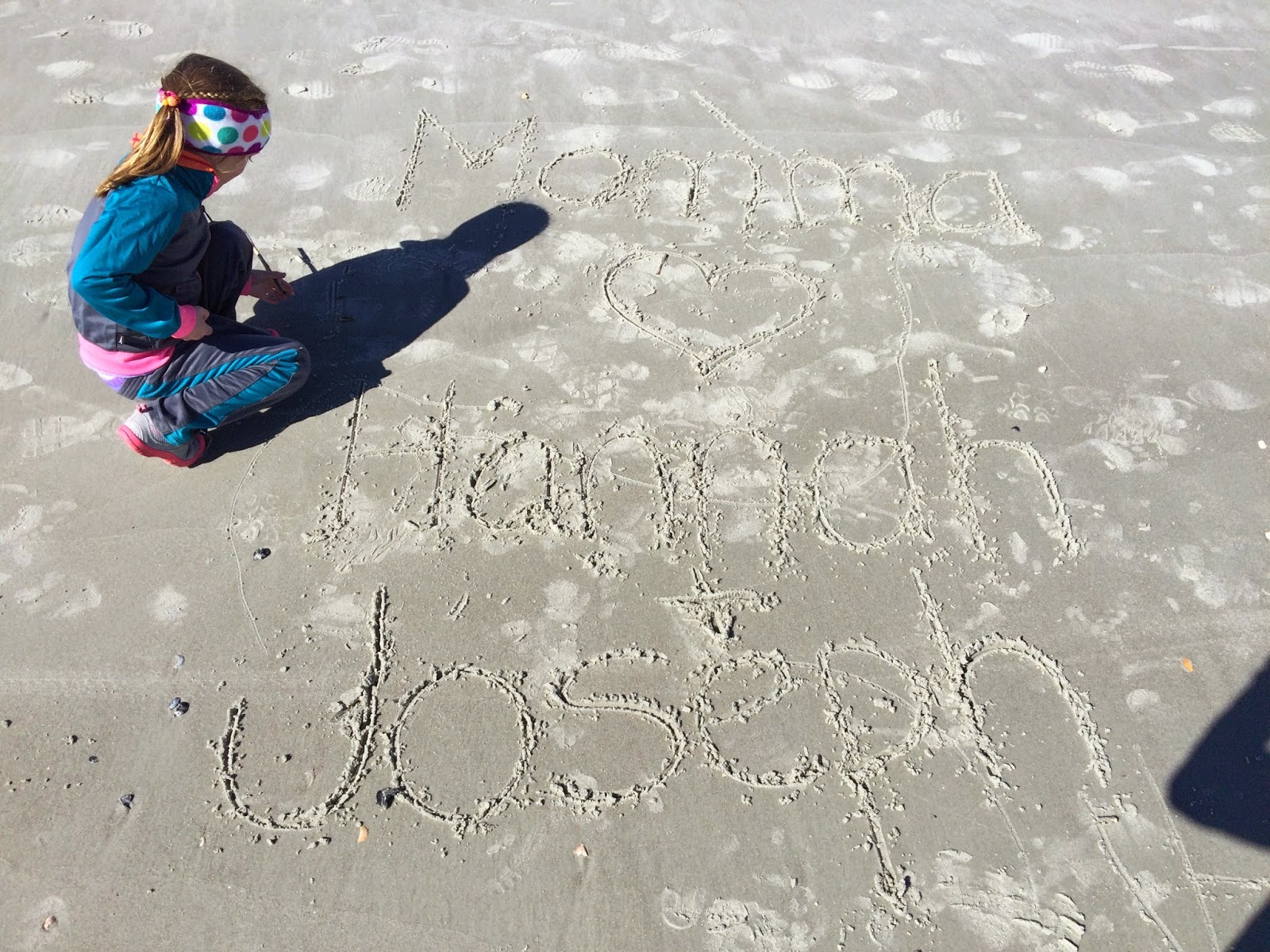 I wrote “Momma (heart) Hannah + Joseph” and then Hannah followed with her own message in the sand, x’s and o’s and stick figures: 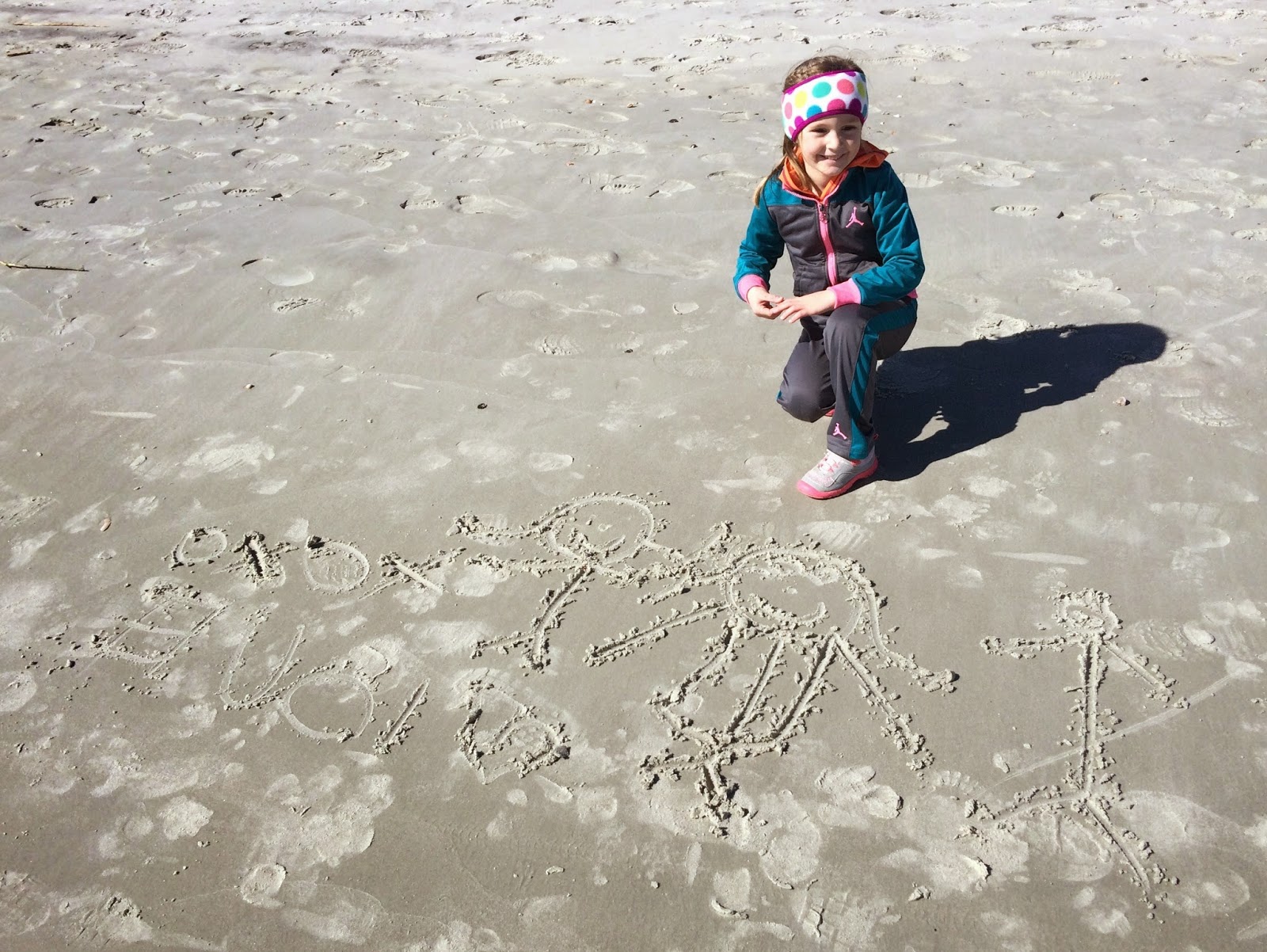 What a fun morning and a great race!

« the pink boots
my little valentines »