While we were on our way back from Joe’s 20th reunion, Meme took Beauty and the Pirate to the fall festival and trunk-or-treat at the church. We hated to miss it, but they sure had a good time. 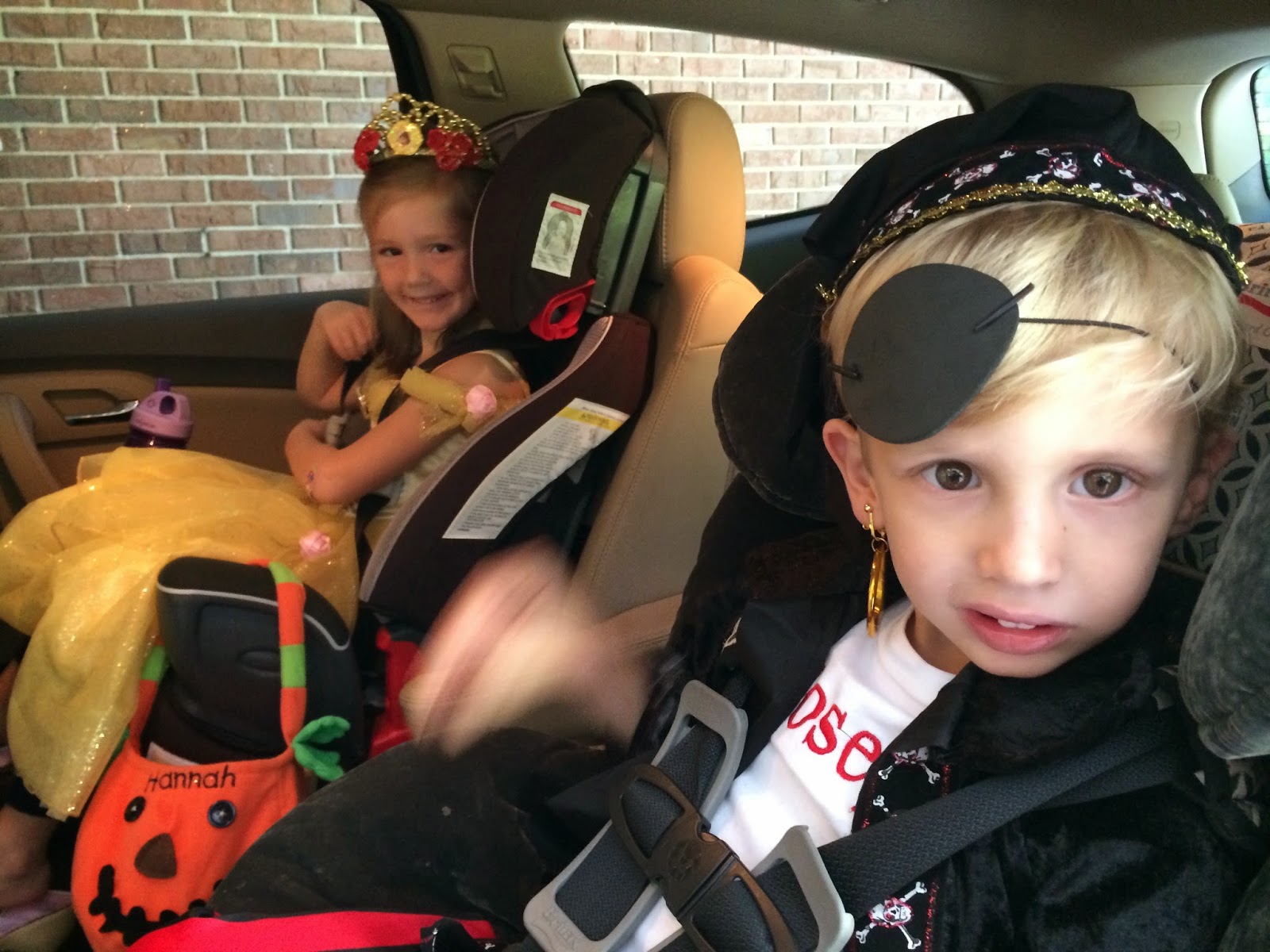 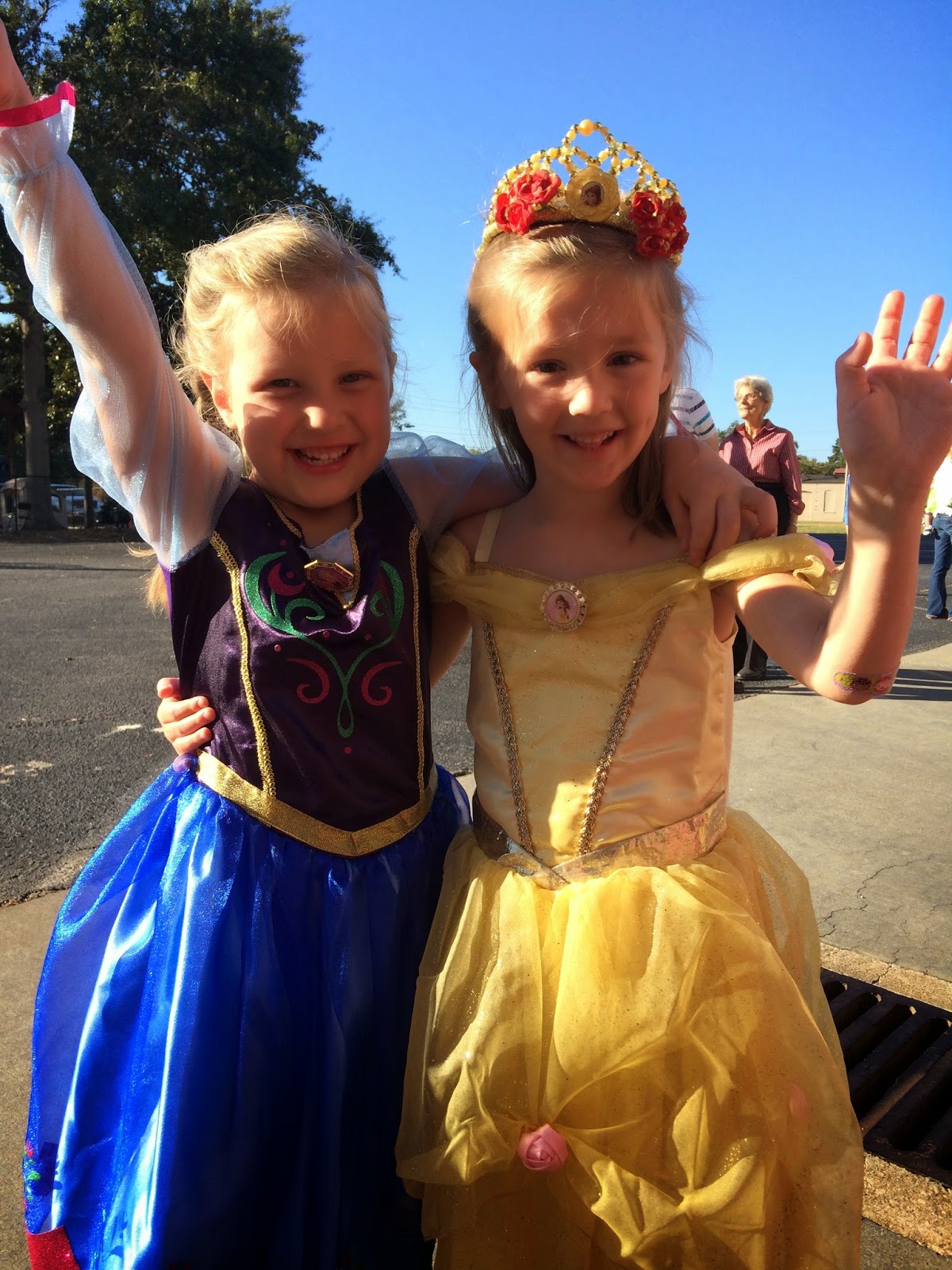 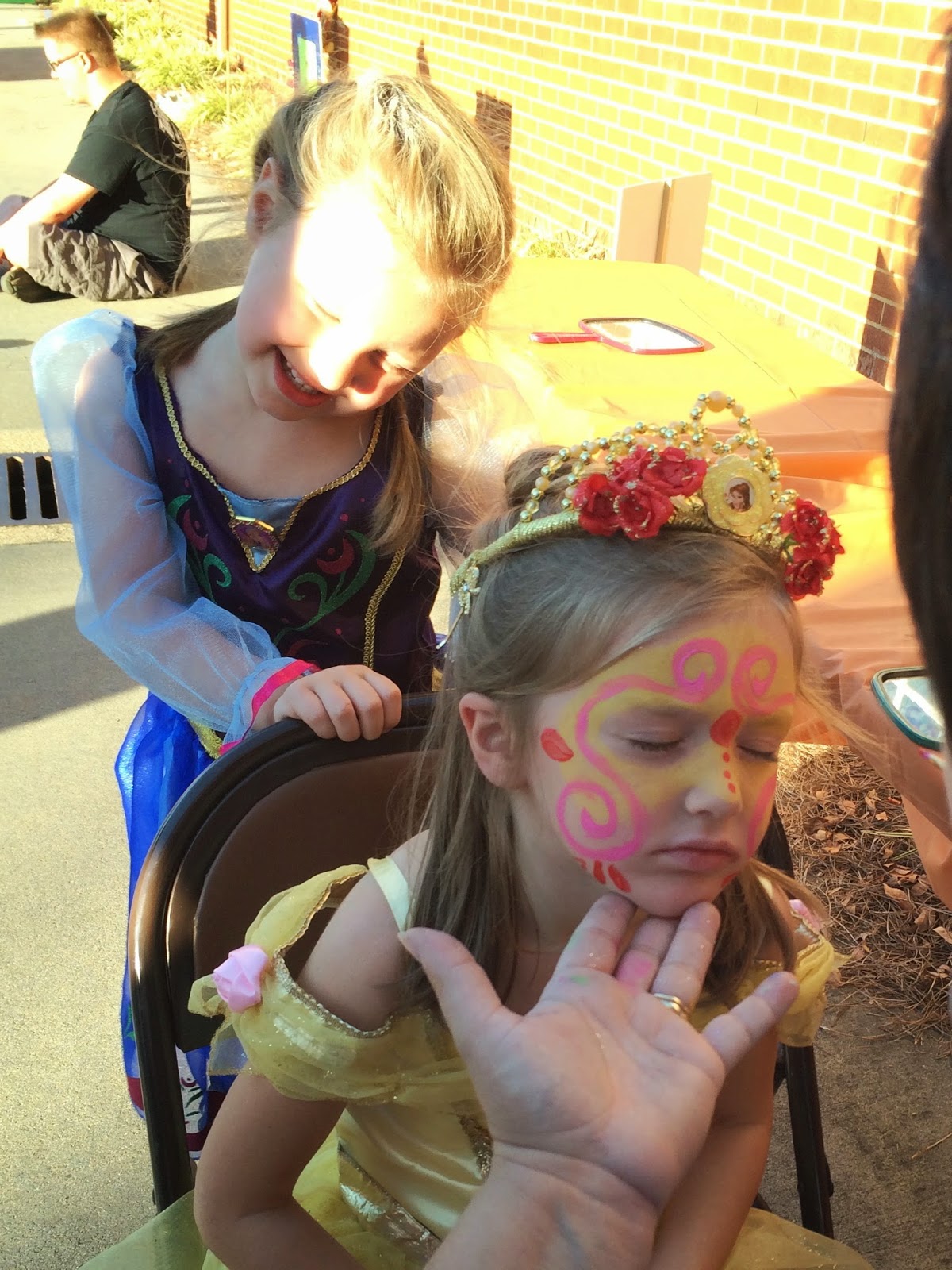 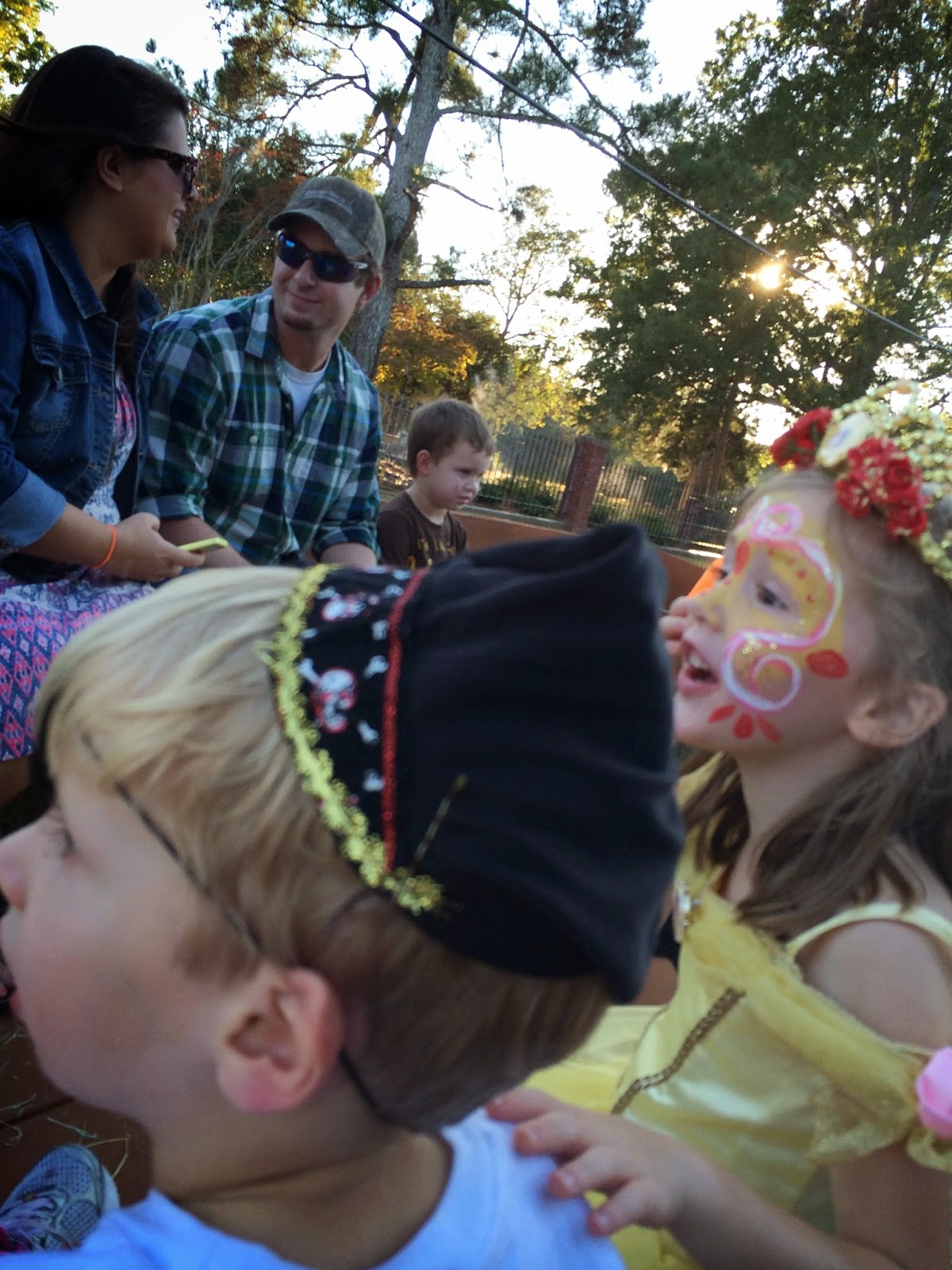 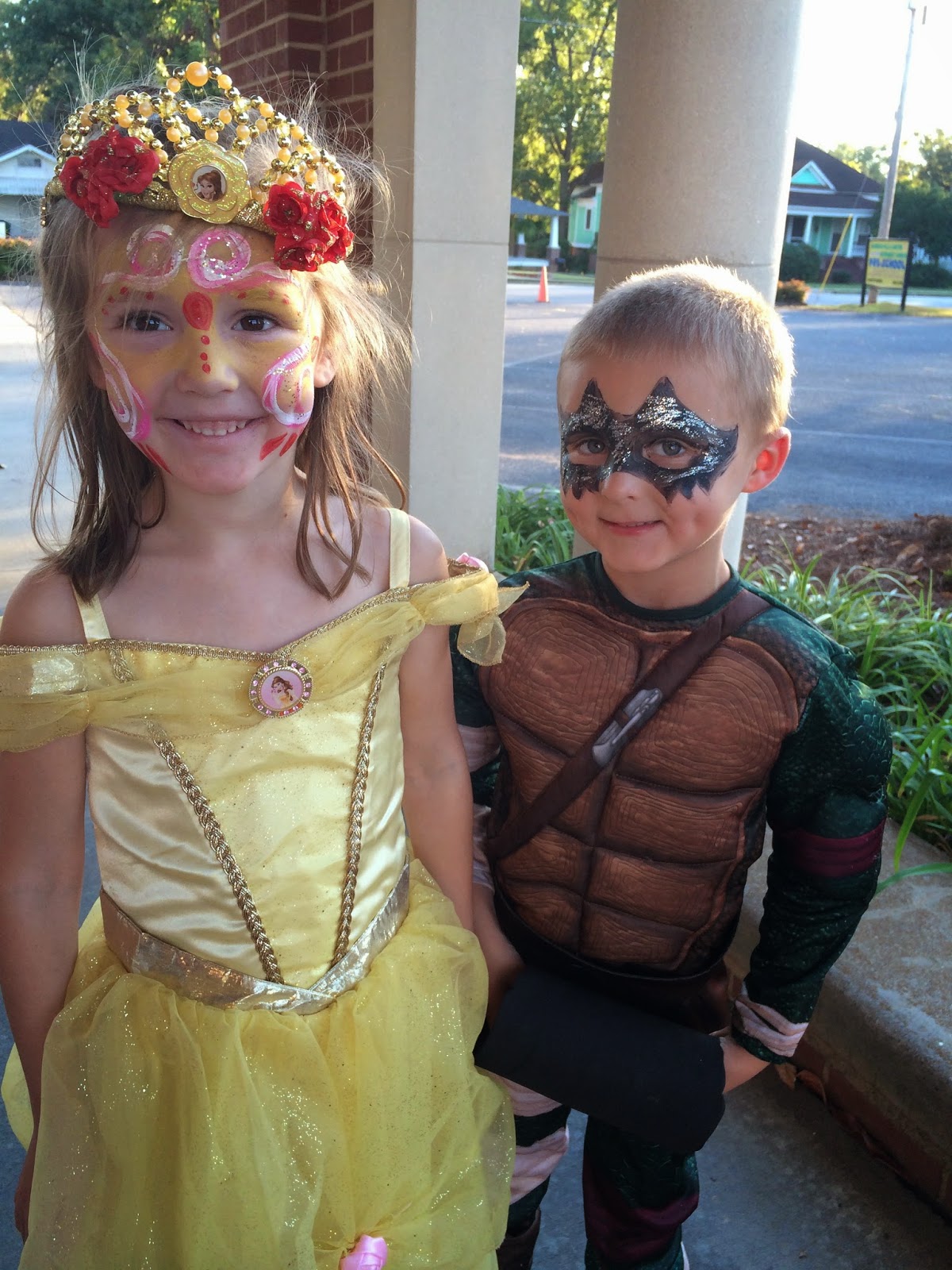 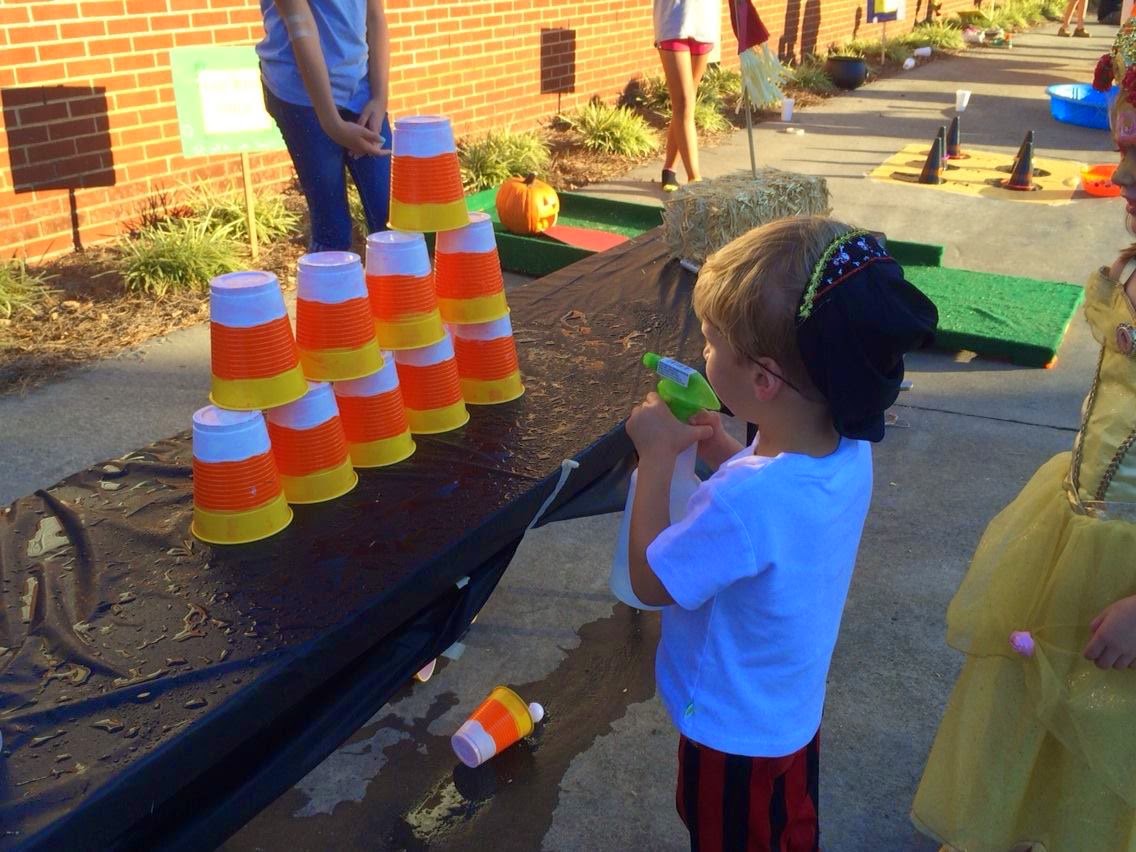 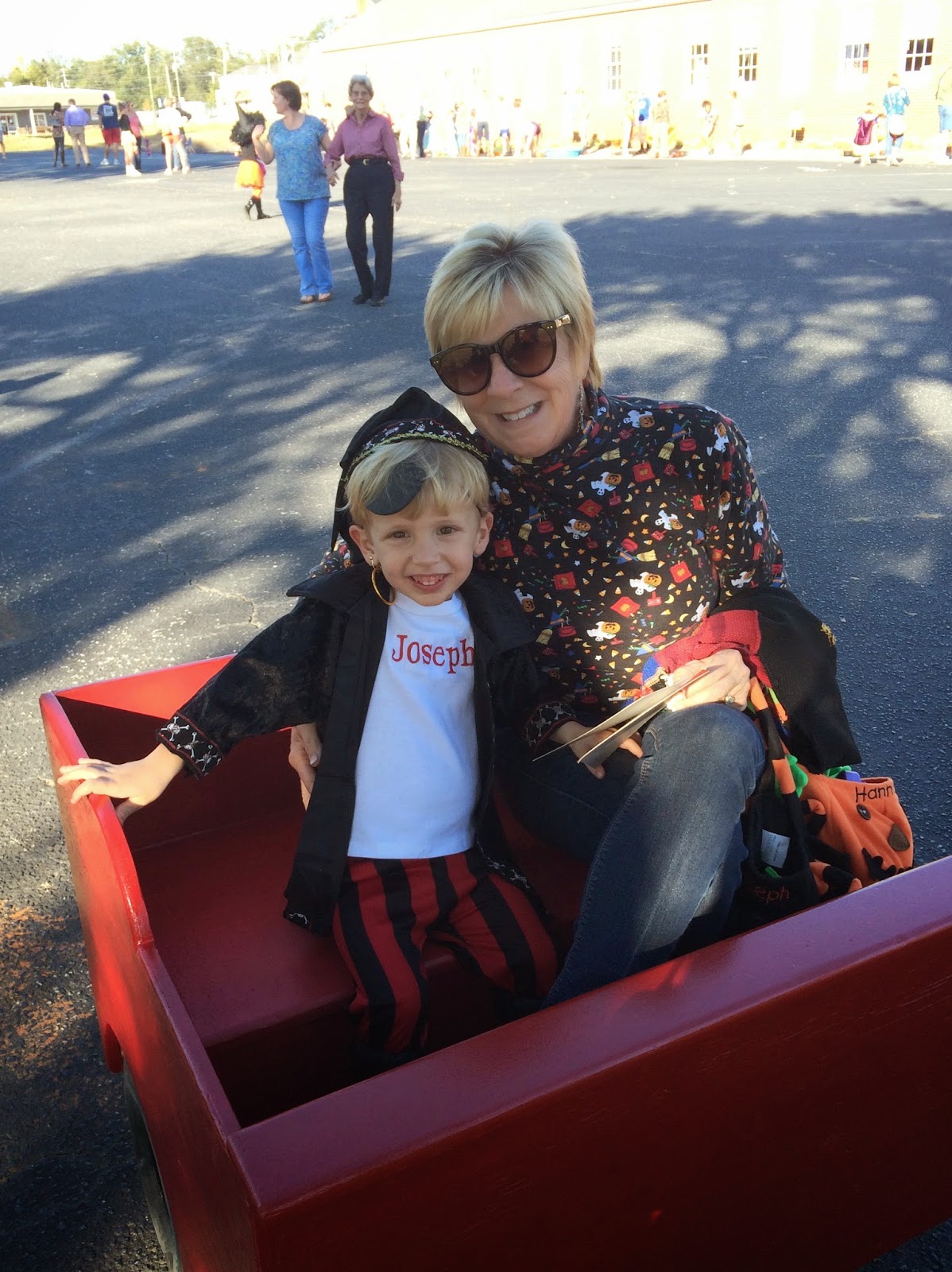 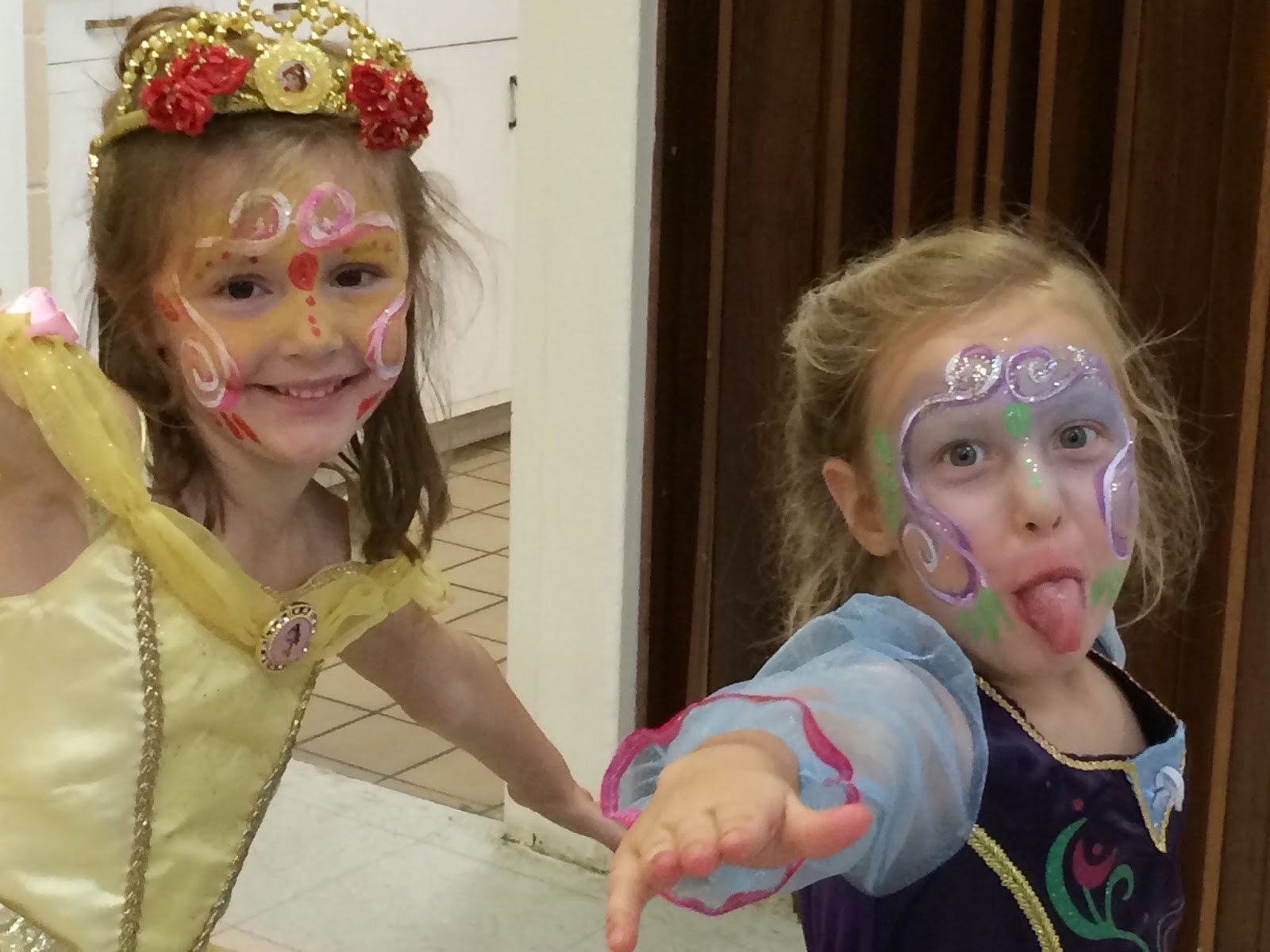 The Red Ribbon Week theme was “cap off drugs” and Hannah added a hat to her uniform attire. 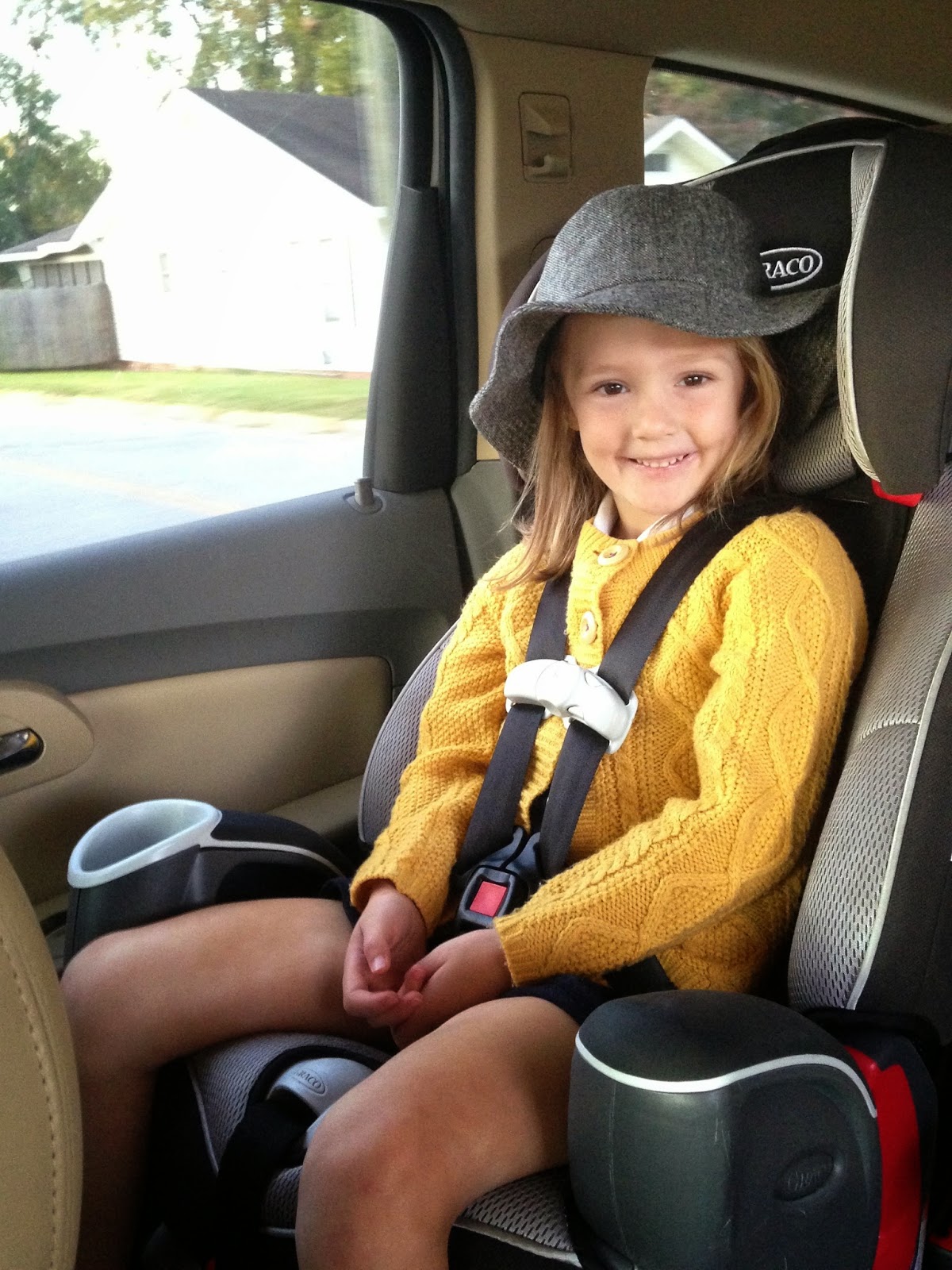 That day I also found this collection in the bottom of my washing machine: 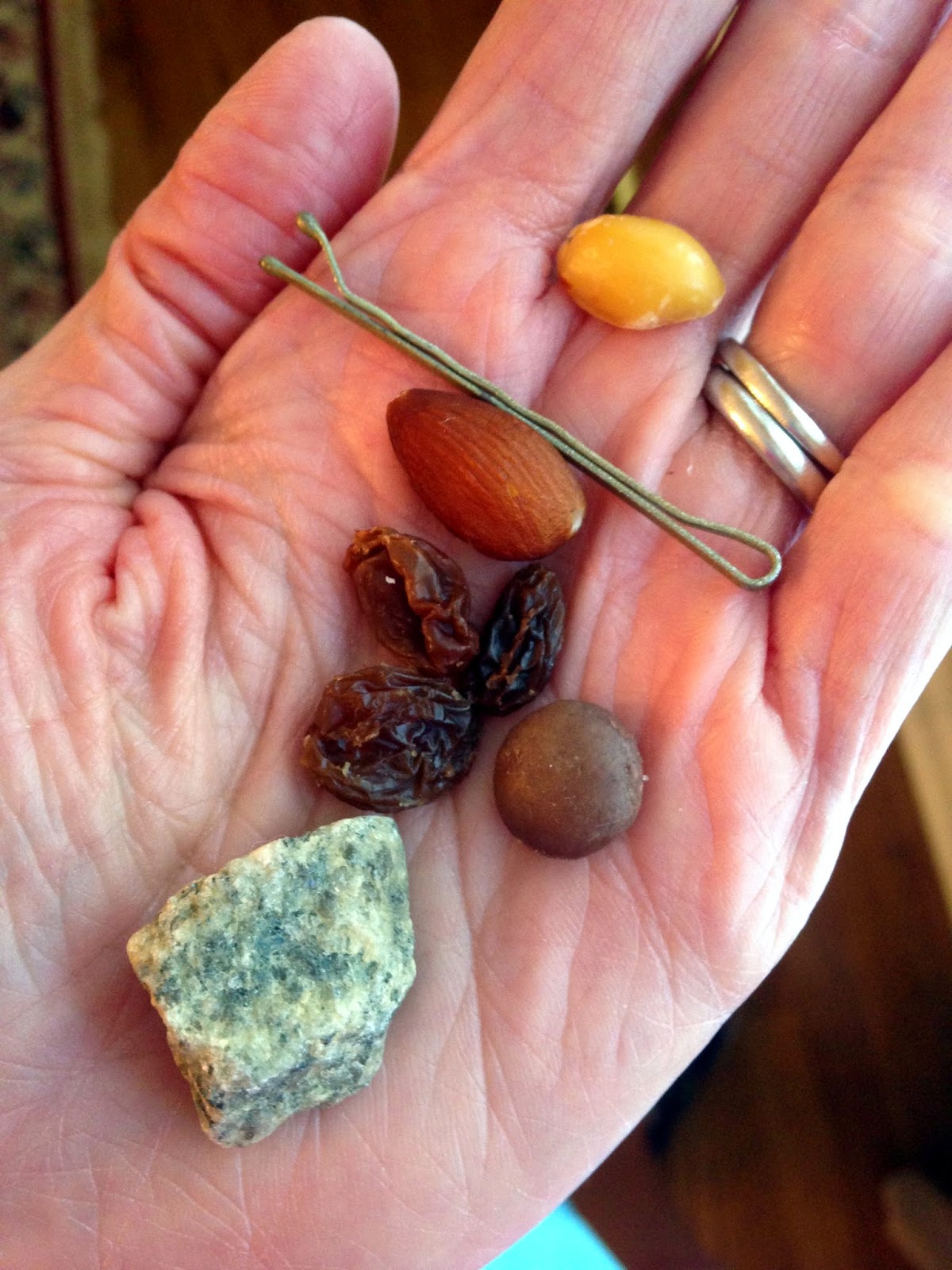 Yes, those are nuts, an M&M, raisins, a rock and a hair pin. How I missed all that is truly remarkable. Another reminder to check those pockets, especially of one little three-year-old boy.

“Black or shade-out drugs” was the theme for the day. Hannah doesn’t have a lot of black, but she loves leggings and any excuse to wear her black boots. Then she added her fancy glasses. 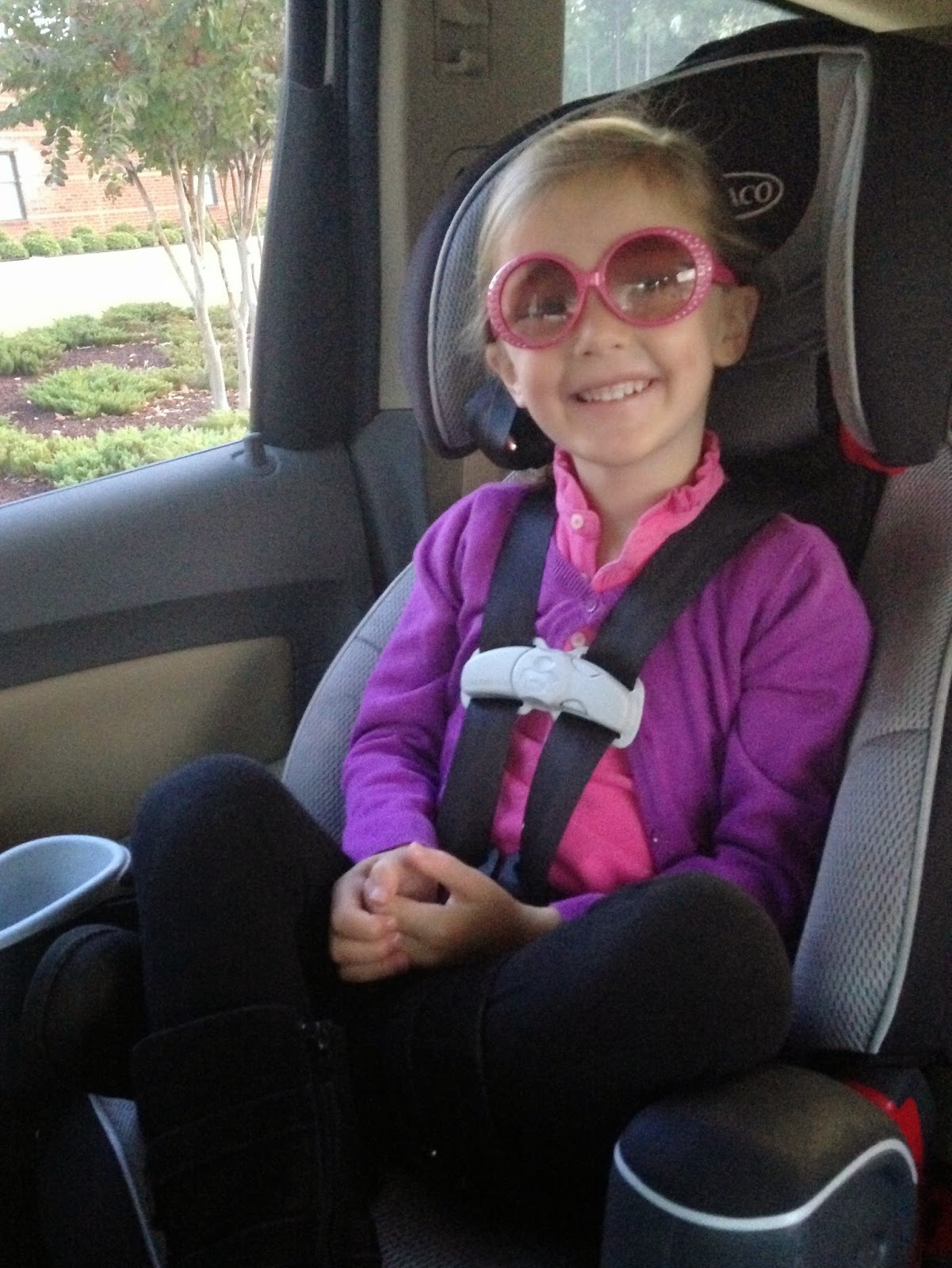 I picked up Joseph from school and noticed he had a bump on his head, just above his right eye. It wasn’t too terrible but it got worse with every passing hour. 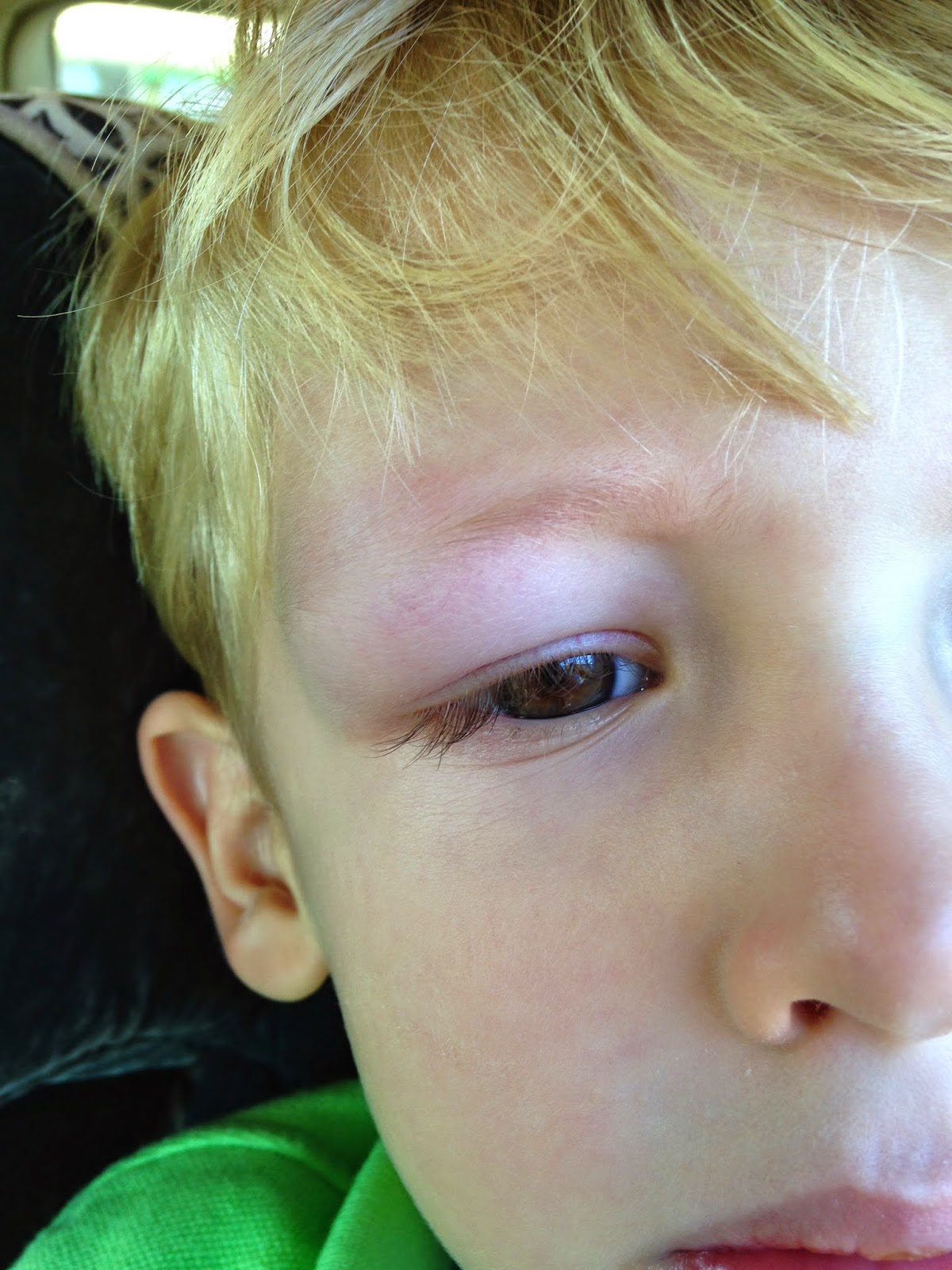 When I asked what happened, he told me he “hit the fence” at preschool. I’m not sure under what circumstance that happened, but he had to have hit it hard.

Didn’t stop him from riding his traffic up the street later on, though. 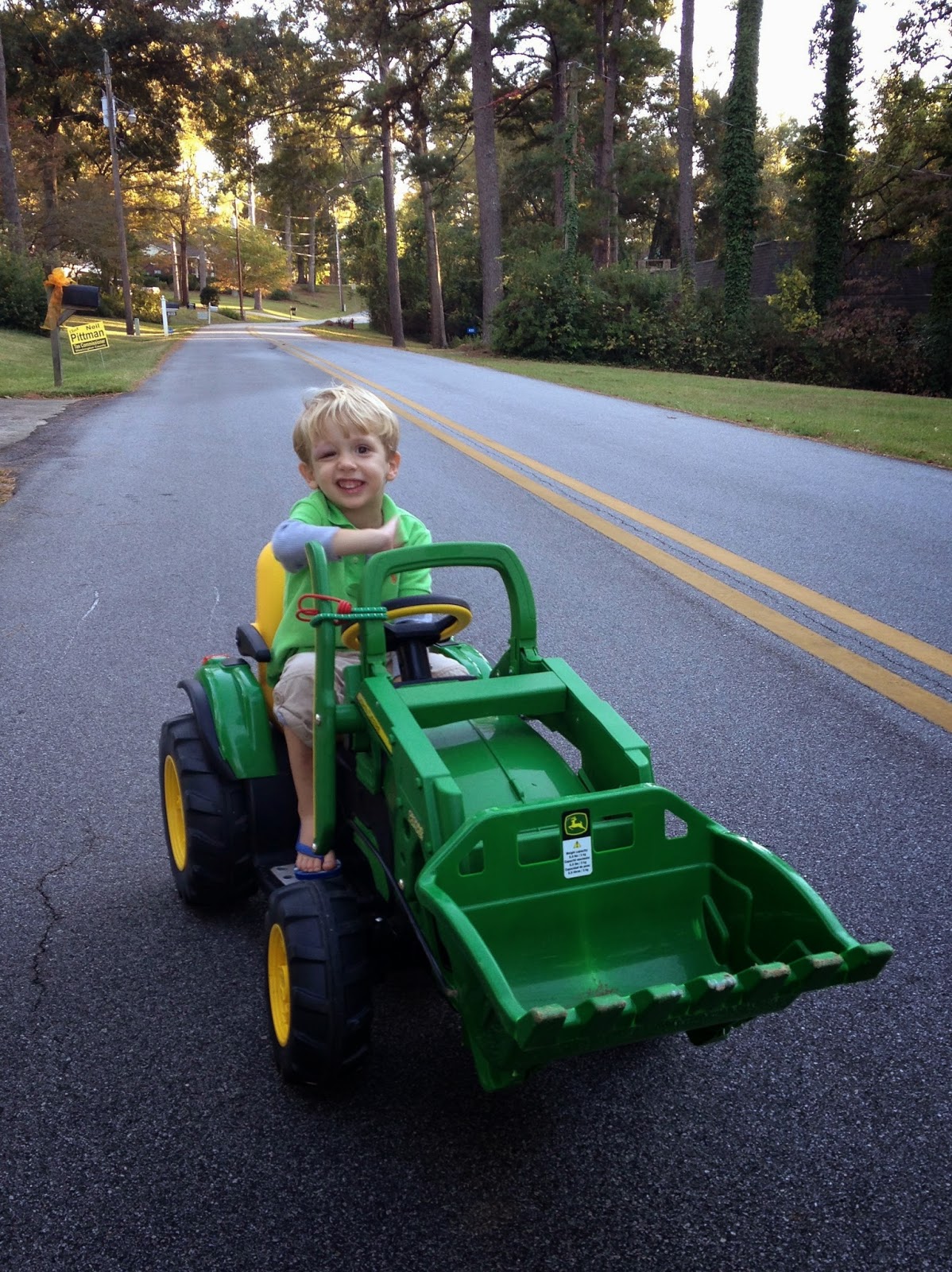 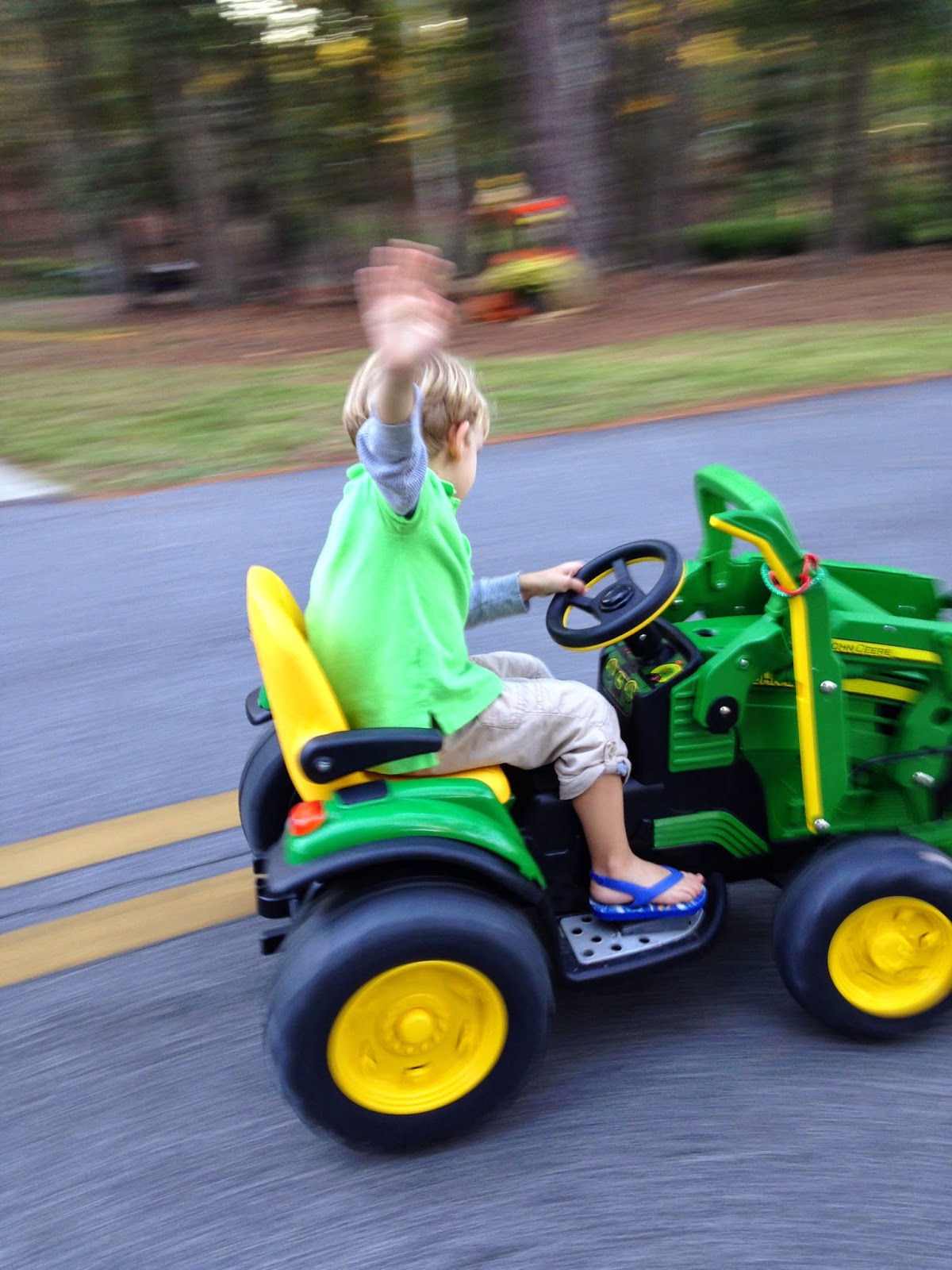 No slowing him down.

We did try to ice it a couple of times, but that was miserable. He was screaming, not staying still…and it was just not happening. Joseph is terrible about icing anything. No child likes icing boo boos, but Hannah was much better about that at his age. Joseph can make himself sick he gets so upset.

Anyway, he went to bed ok that night, but woke up around 4am and came to me crying and scared. His eye was swollen shut. Amazingly, by school it was looking a lot better.

I met up with Hannah’s class at the downtown square to go trick-or-treating at all the local businesses. 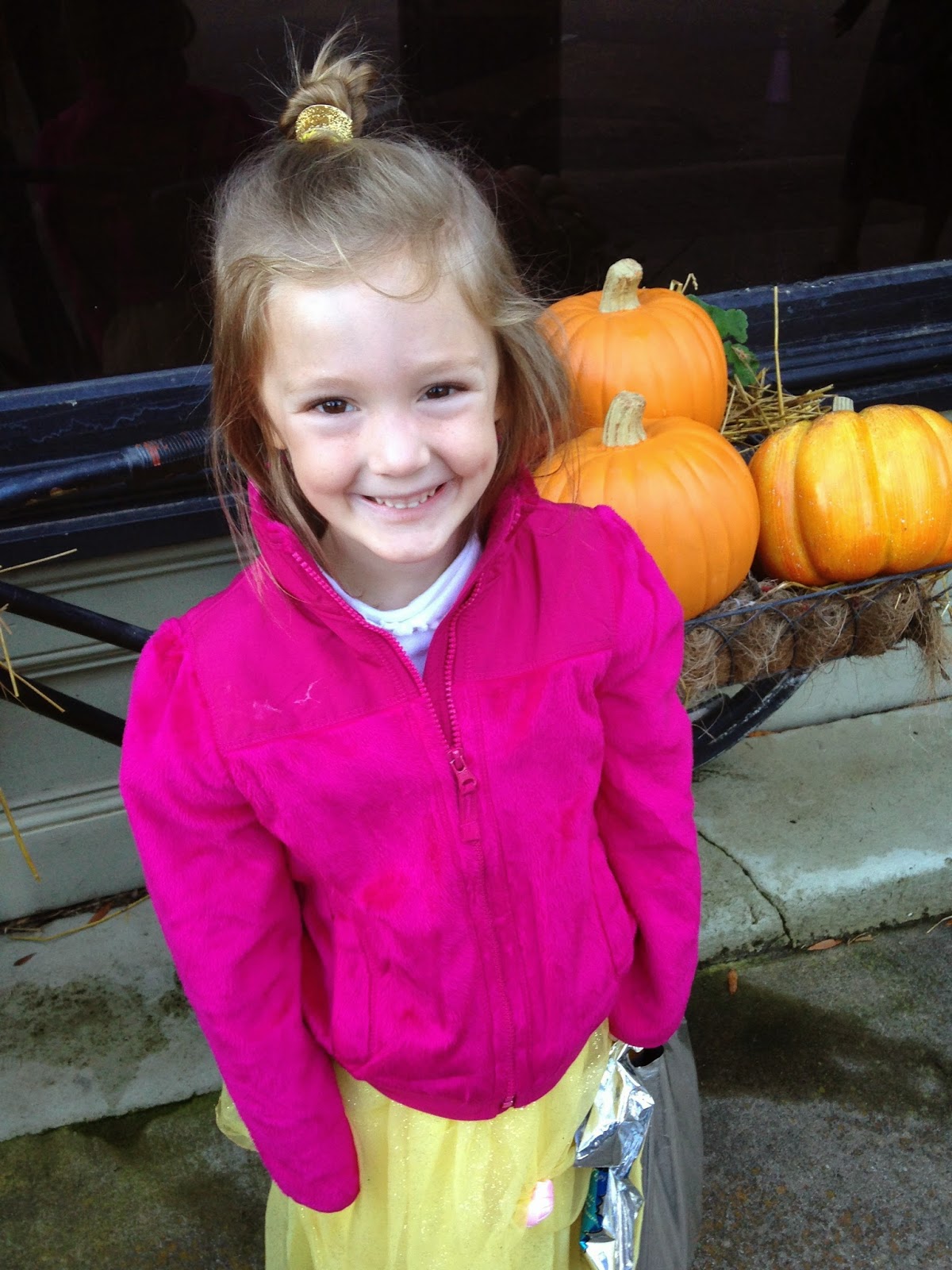 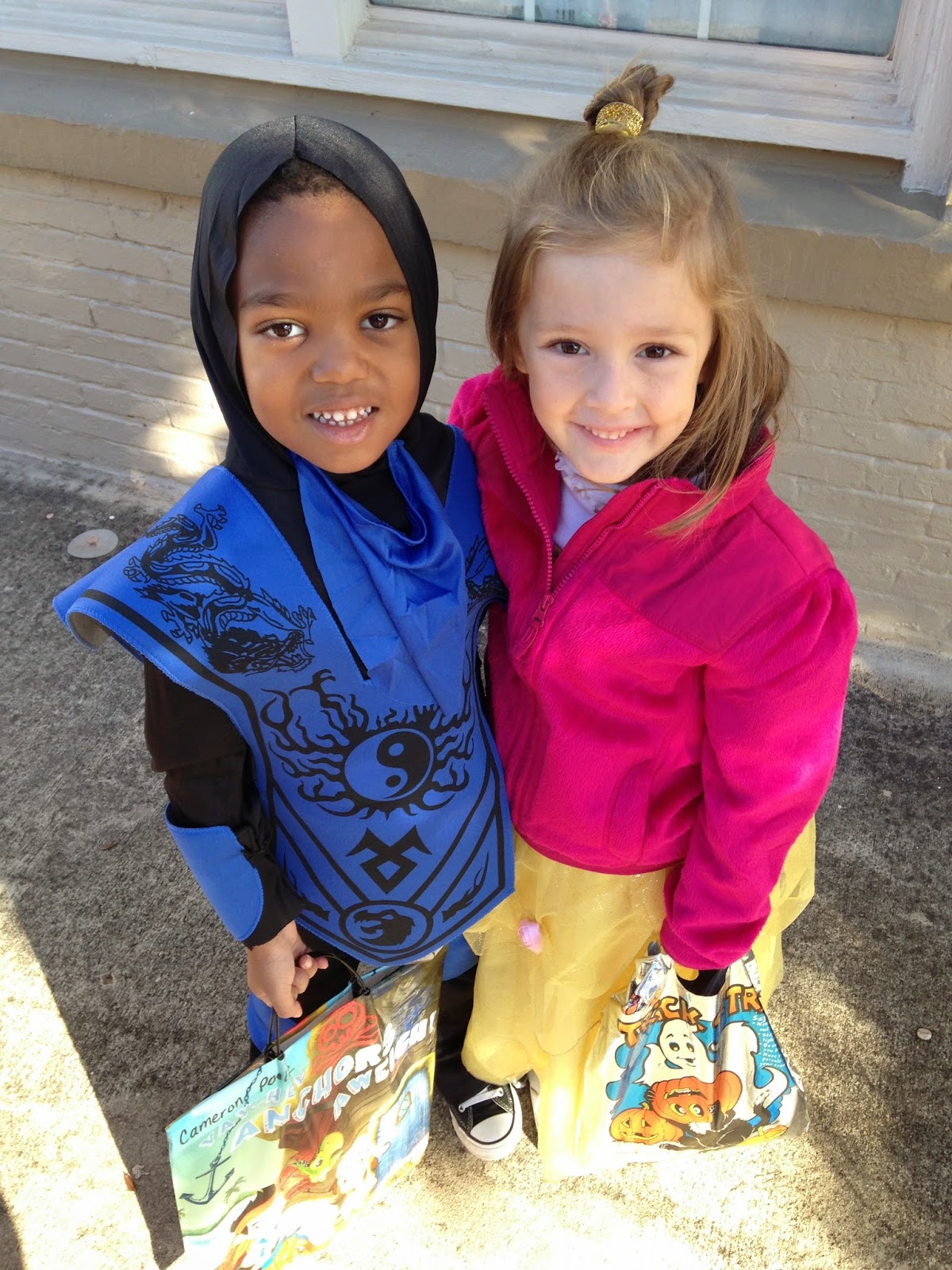 Above: she and her sweet ninja friend, Cameron. Below: the treat bag she decorated at school. 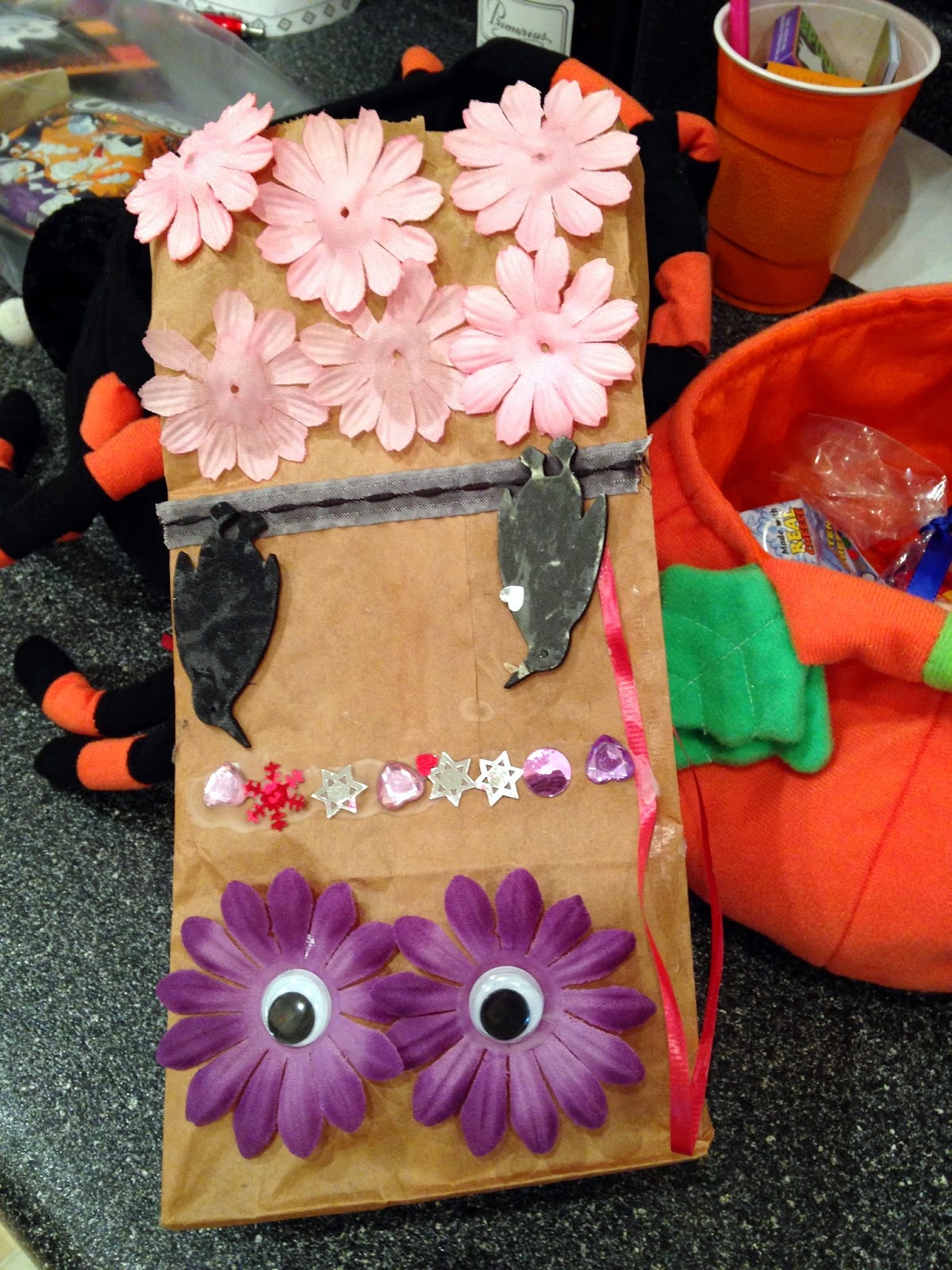 Meanwhile, Joe was at the preschool watching Joseph eat a lot of sugar at his fall party. Afterwards, they headed to the playground where I met up for games – and lots of candy!

Anything that involved throwing he was all in… 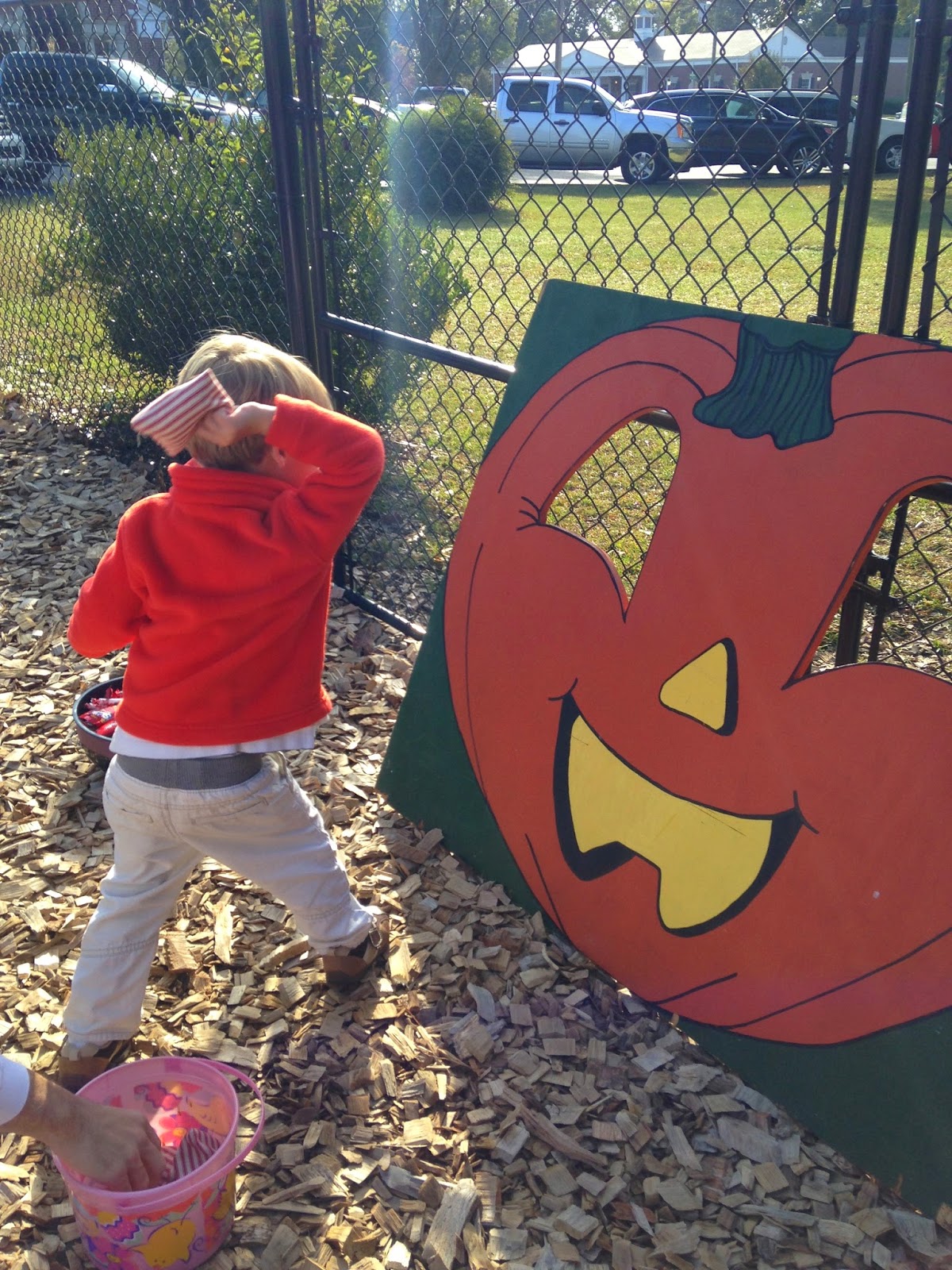 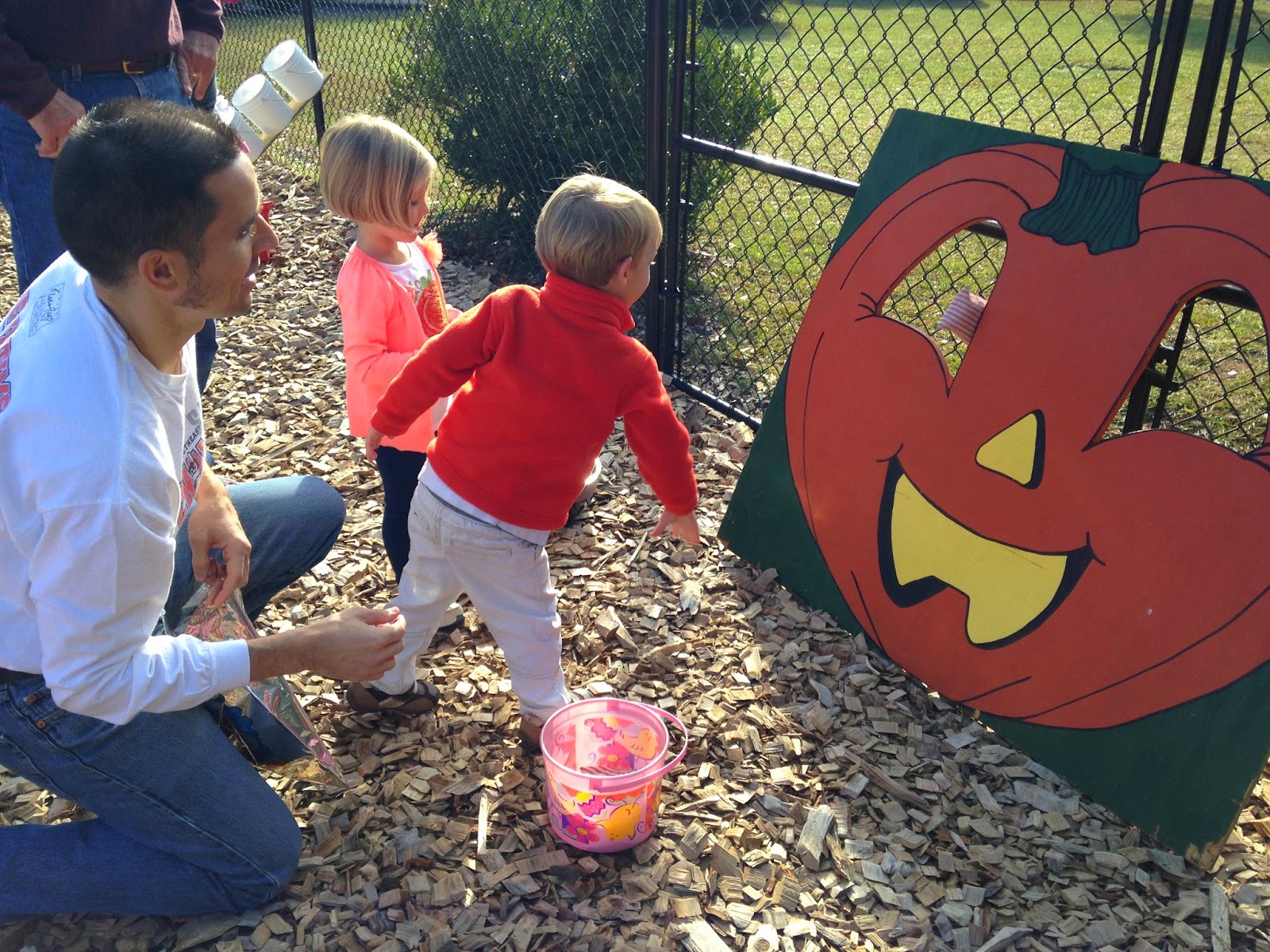 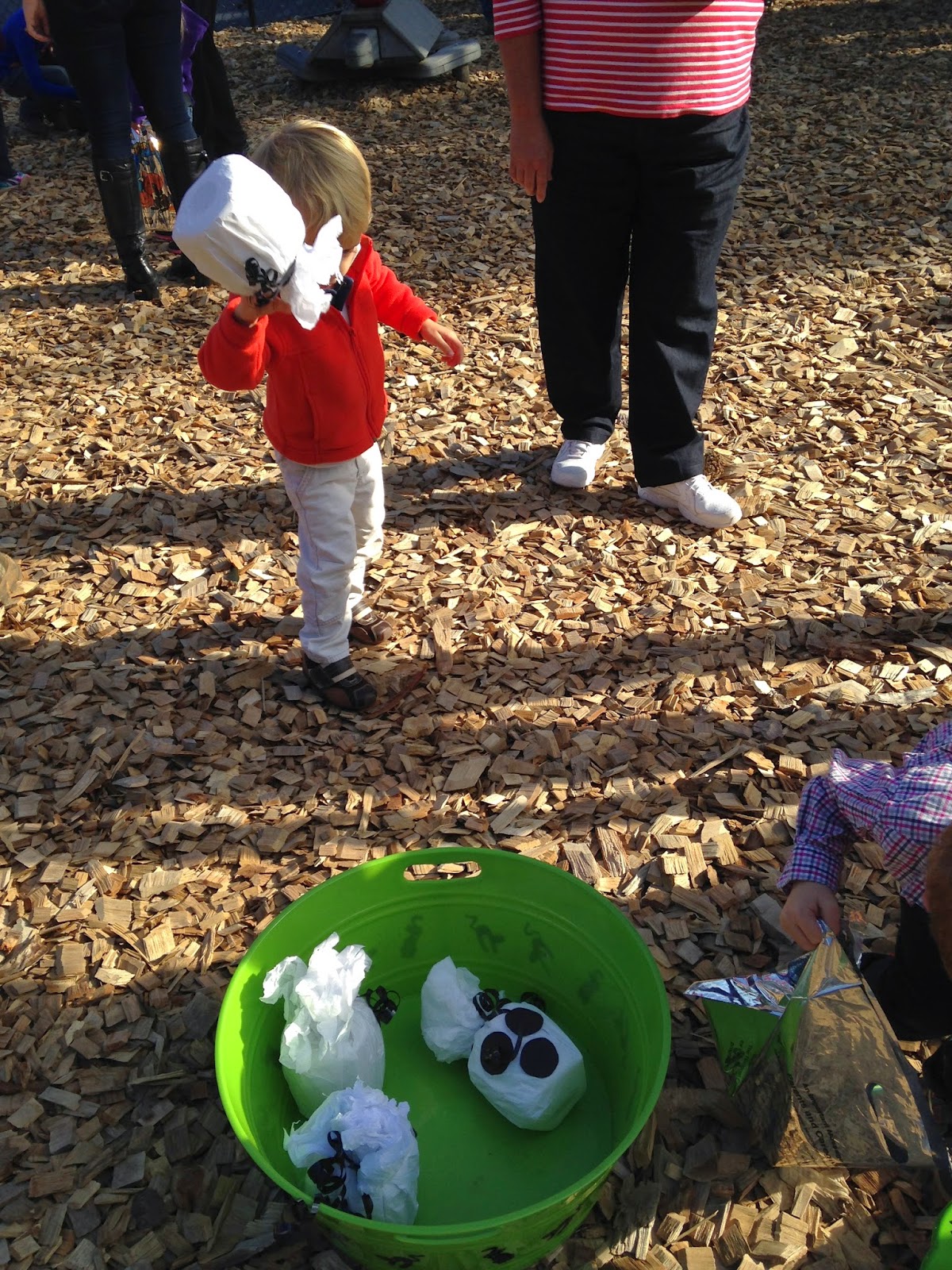 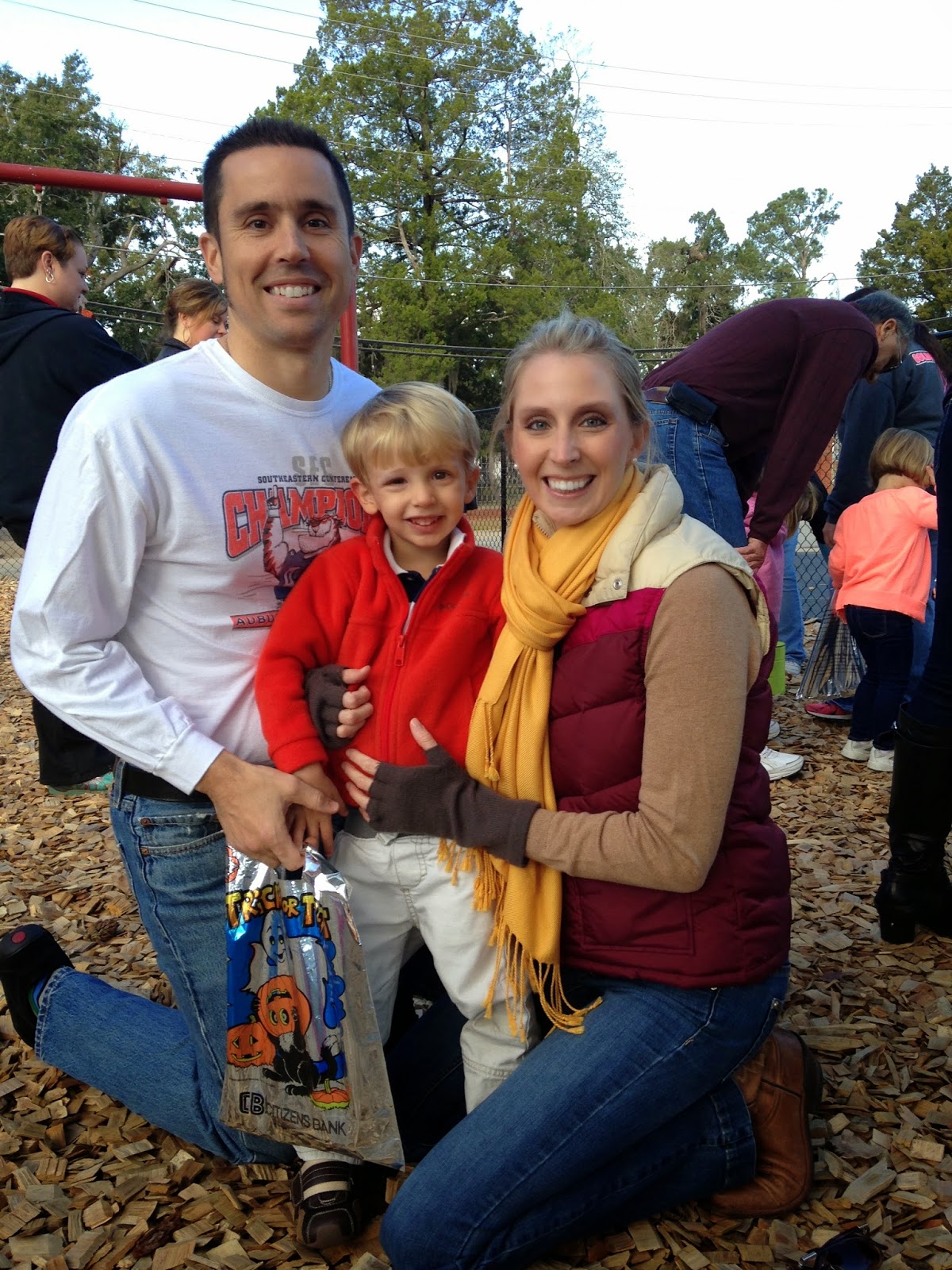 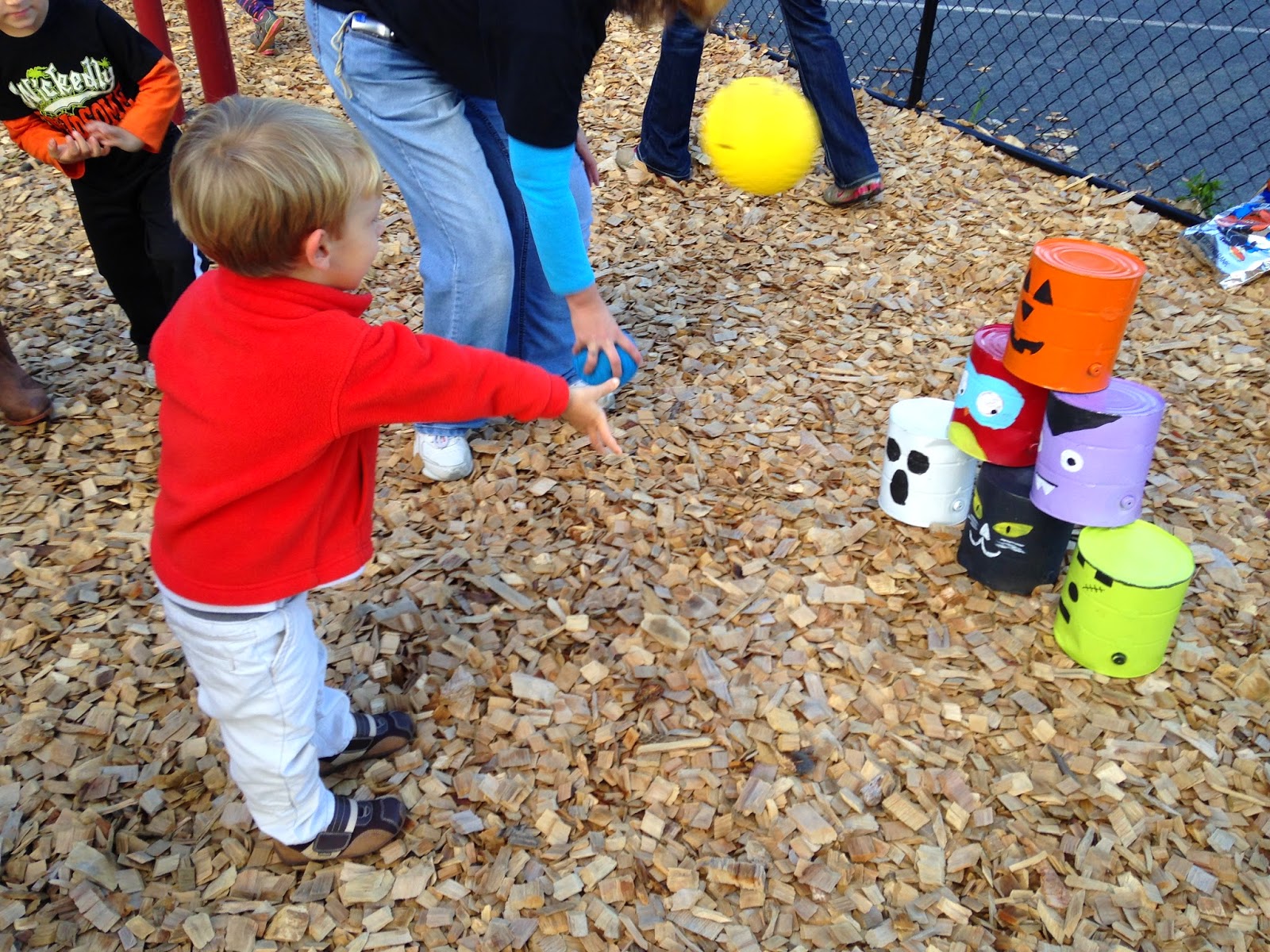 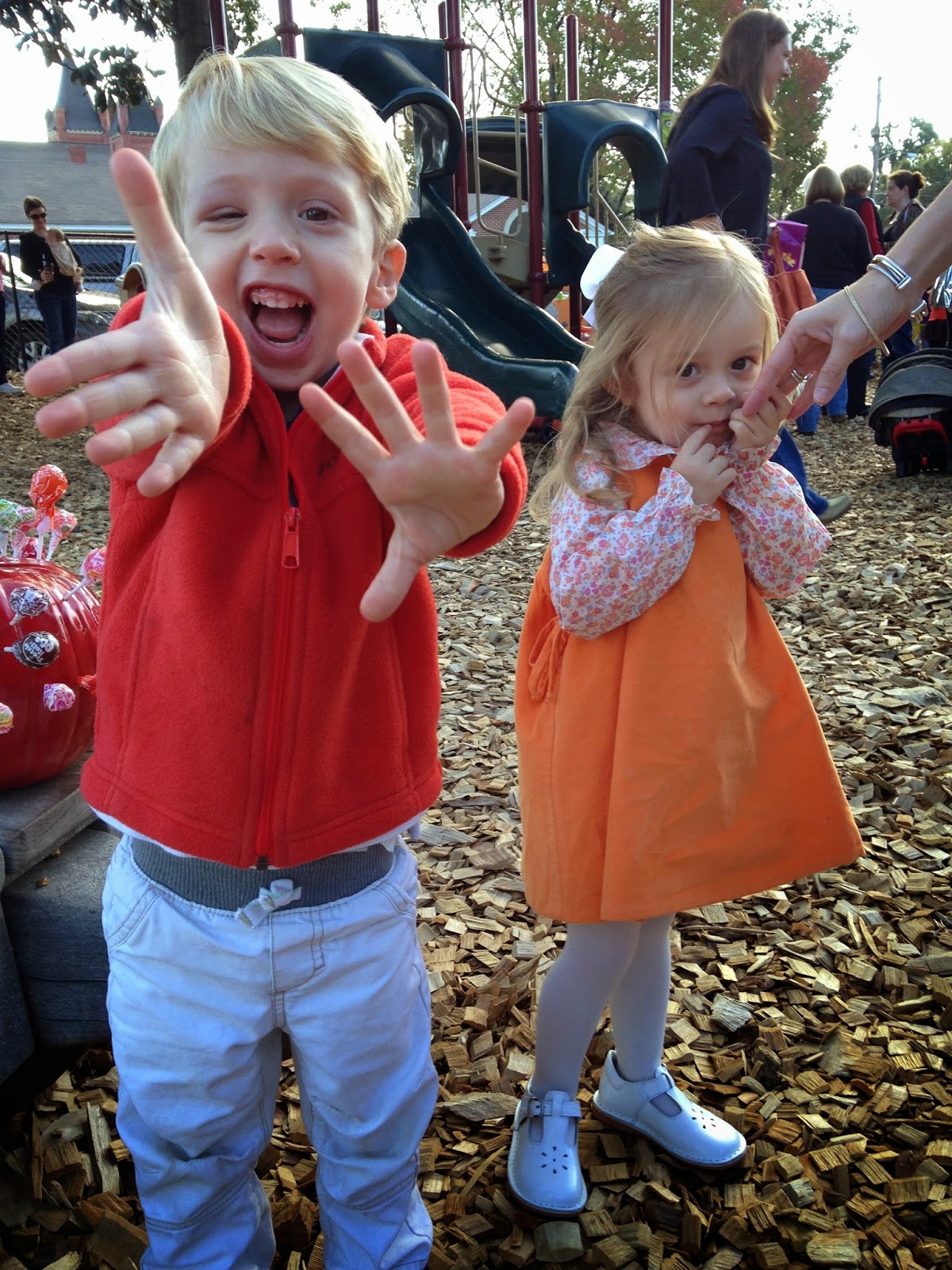 We were completely taken by surprise when he hopped on the swing and started pumping! 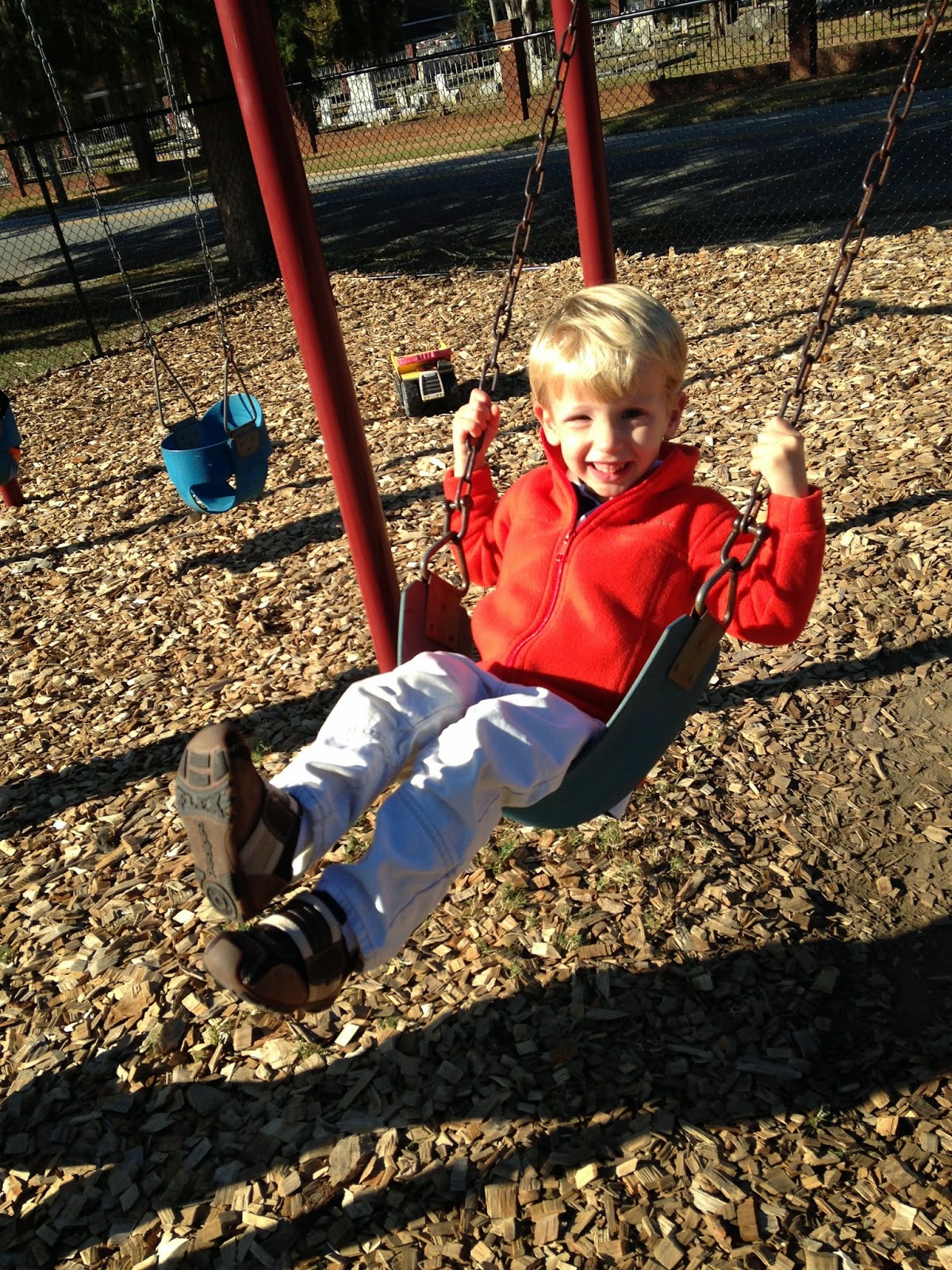 Not sure when he learned that! I think it was just last week Hannah was pushing him on the swings in the backyard.

Speaking of the backyard, I completely forgot to put our ghosts out until the last minute. 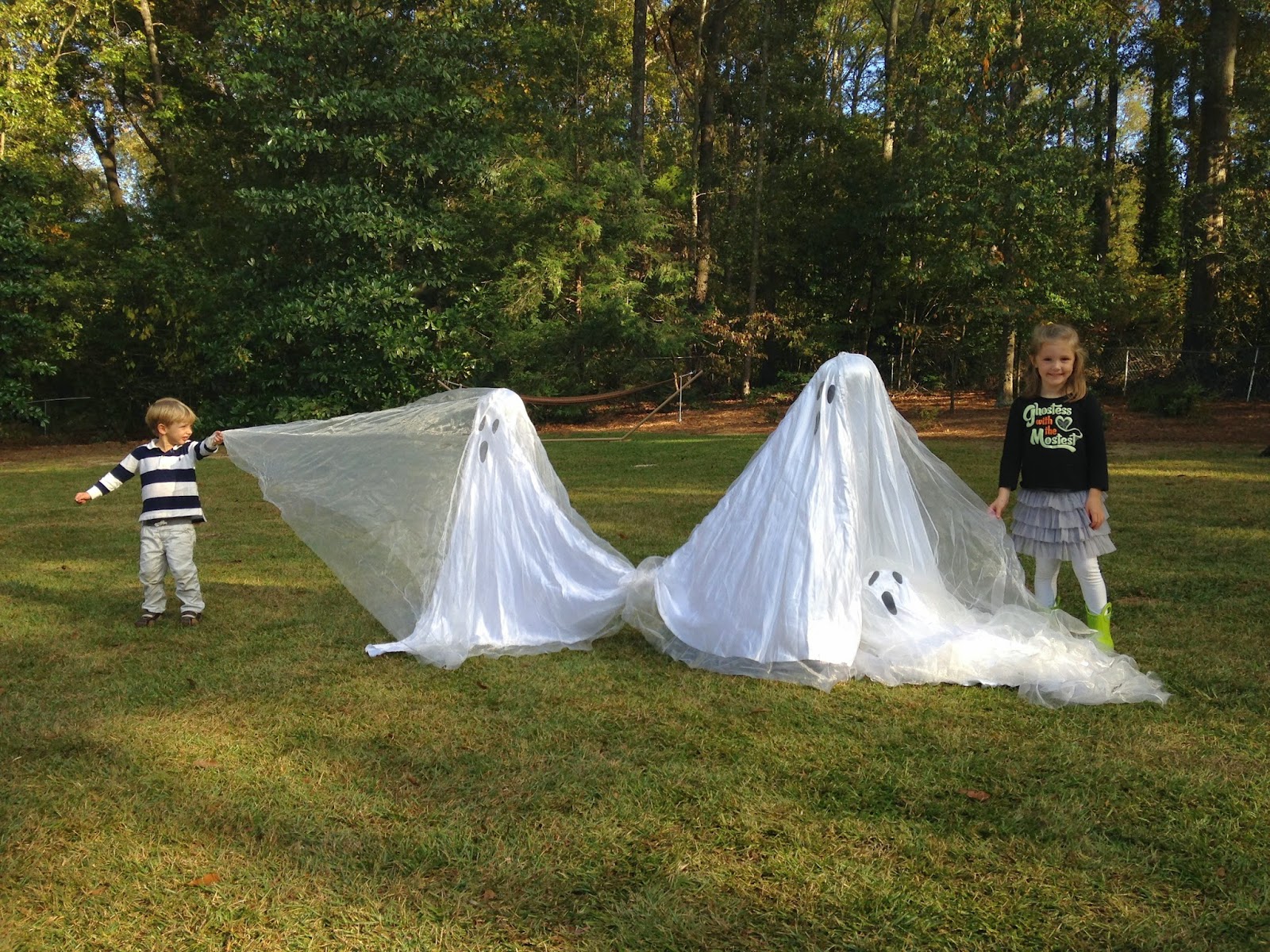 And this is their last year, the poor things. It was quite a production to just get two standing this time. I believe the two surviving ones’ names are Scarlett and Lila…or Riley. I think the names changed at some point.

Halloween night we joined some good friends to trick-or-treat up and down Smith Street. We have several friends that live on that road and, with the houses close together, it makes for a perfect (abbreviated) candy-gathering experience.

We paused outside of my friend Deana’s house for a moms and babies photo (we are all looking at the “real” camera): 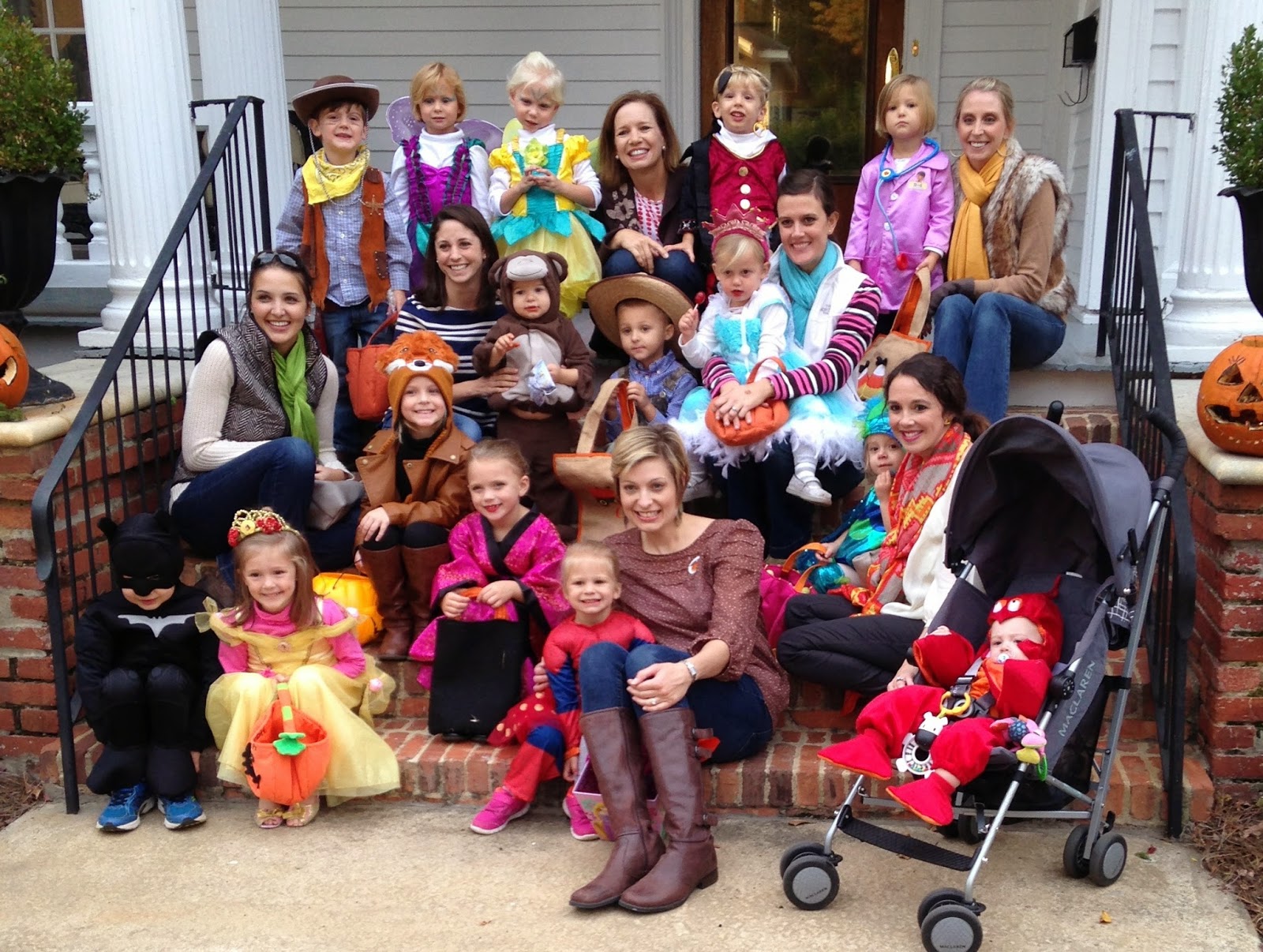 Hannah was a hard-core trick-or-treater. She really wanted to go in a backyard haunted house (my fearless one) but it wasn’t open yet. {Probably a good thing.} But when it came to going house to house, she was up at the front of the pack with her friend, James, always first ones to the door. Thankfully she remembered her manners and said thank you. 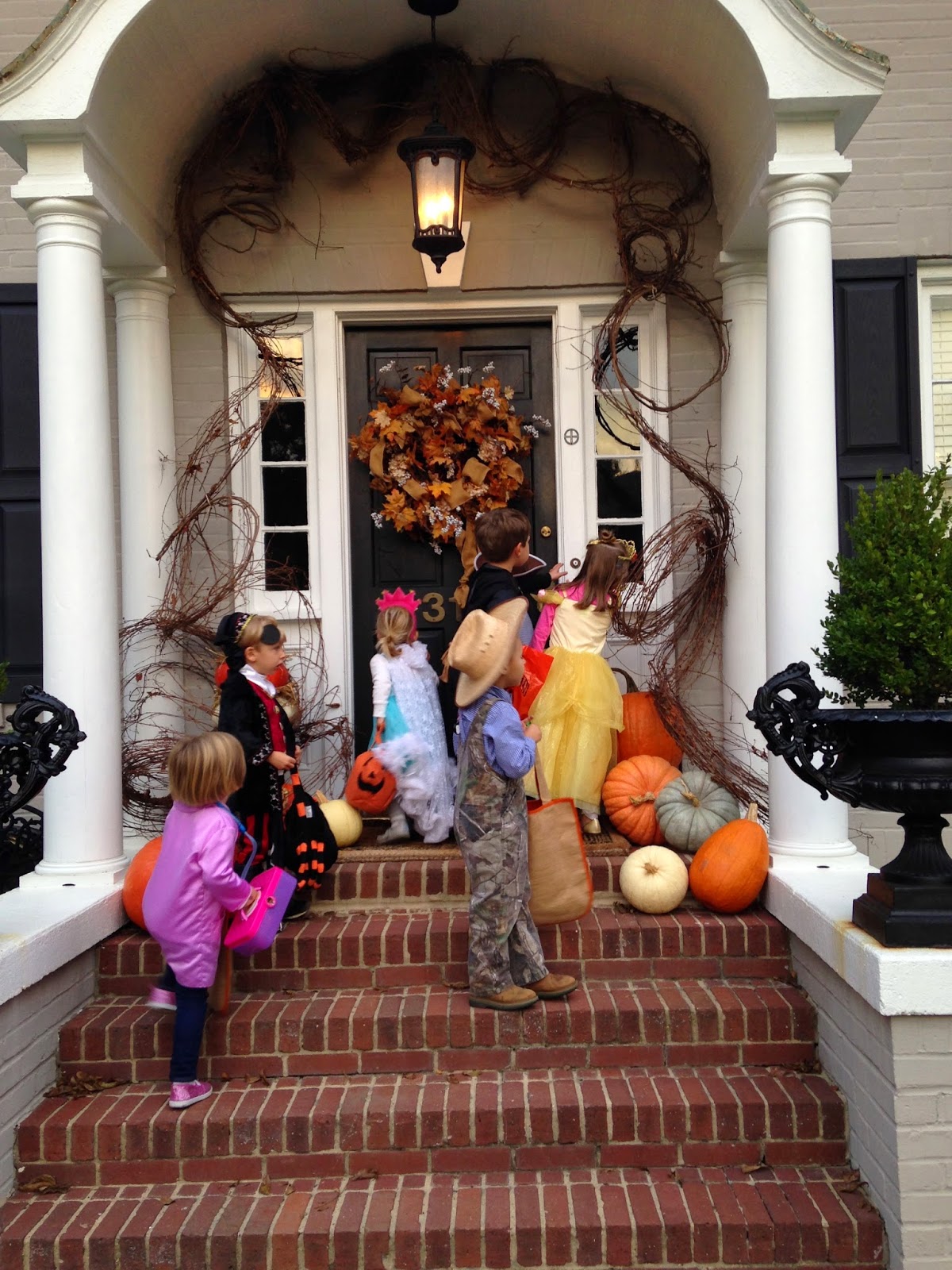 From Smith Street we went to a friends’ house for our family supper club featuring the Pioneer Woman’s spaghetti. Delicious! The kids had a great time running around together and the adults had a great time chatting (and enjoying the fact that the kids were mostly entertaining themselves).

I only have one picture from the night: 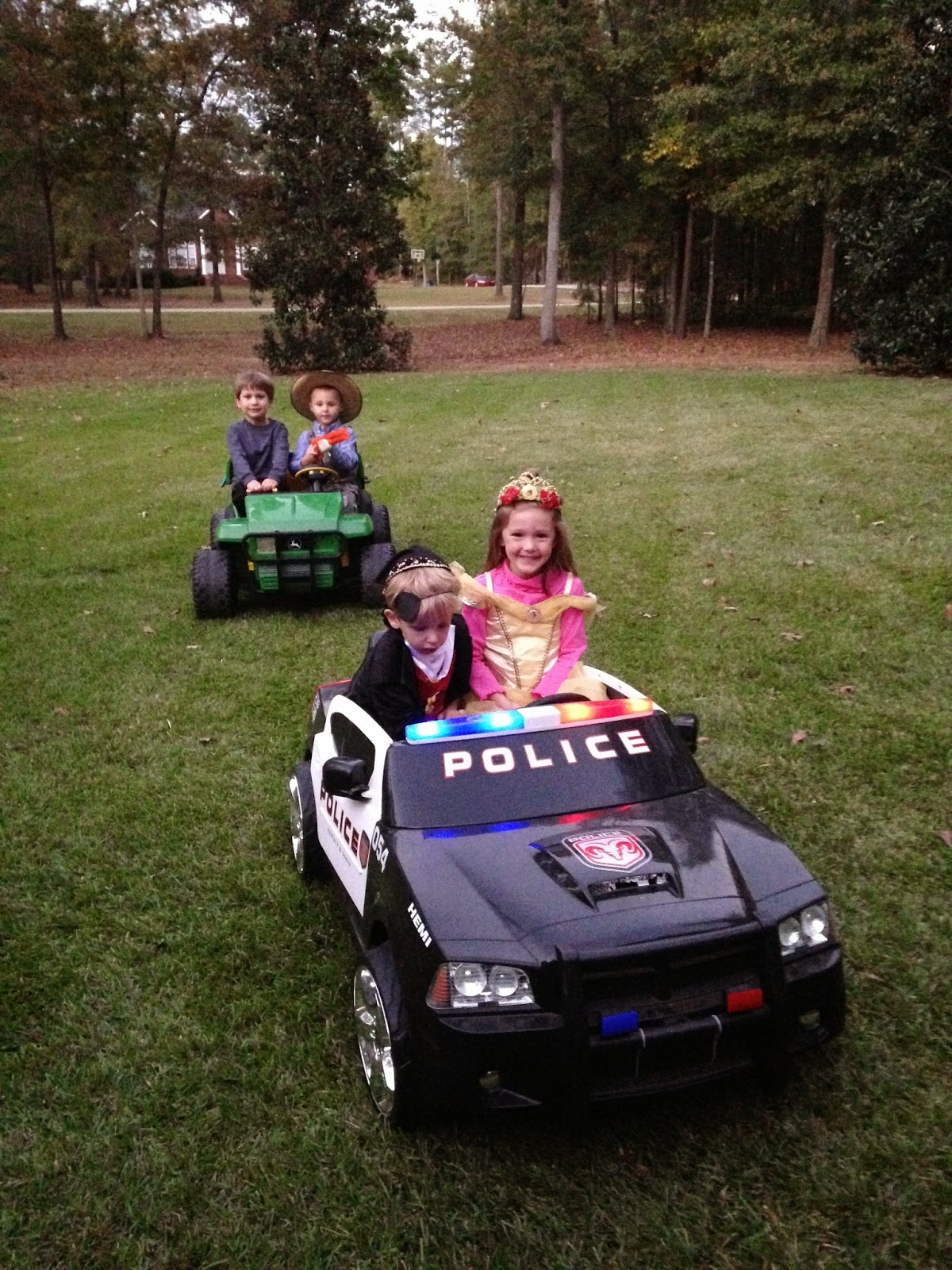 Joseph counted down the days until he would get to ride in the “ca-plice” car at Mrs. Kati’s house. He talked about it constantly. And it did not disappoint. He let his sister drive for a while and then, once everyone else moved on to other activities and toys, it was his turn.

At one point, well after dark, all the other children were inside and Kati and I found him still driving the police car around the yard. He cried when I told him it was time to come inside, totally heart-broken and confused as to why I would so cruelly cut his playtime short. I caved and let him take one quick little spin and then Mrs. Kati asked him to park the police car – and the John Deere Gator – in the garage. On top of that, she let him close the garage doors.

He was in heaven. There is nothing Joseph loves more than opening and closing a garage door.

Except maybe driving the ca-plice car.

It was a fun night and a very exciting Halloween for these two little ones of mine.

« USNA ’94
meeting lachlan and a visit with granddaddy »