At the end of April we were out in the backyard cleaning things up a bit. We aren’t responsible for regular yard maintenance; the church pays a landscaper to do that. However, there is a hole right in the path of a child running to the swing set. Many have tripped and fallen. Joe, with Hannah and Joseph’s help, filled it in a bit. 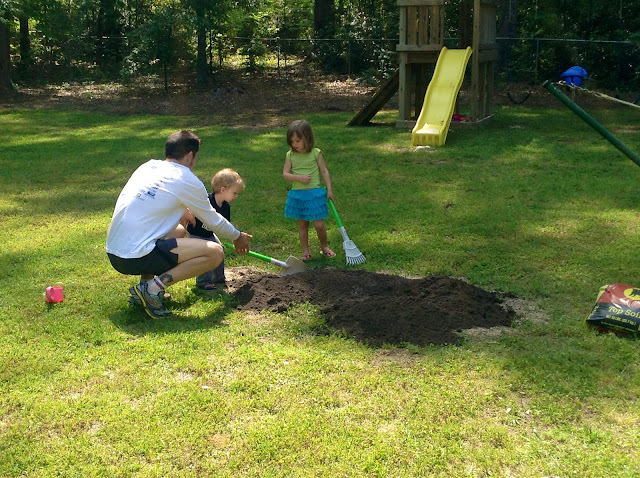 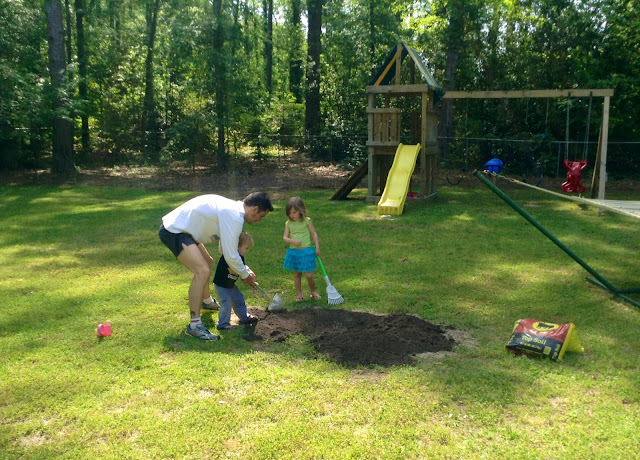 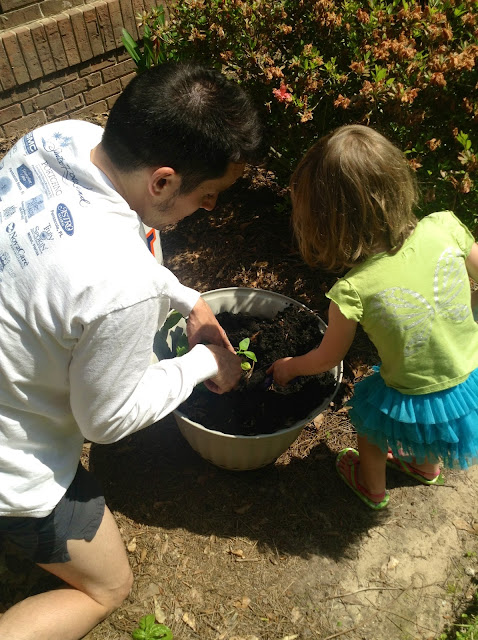 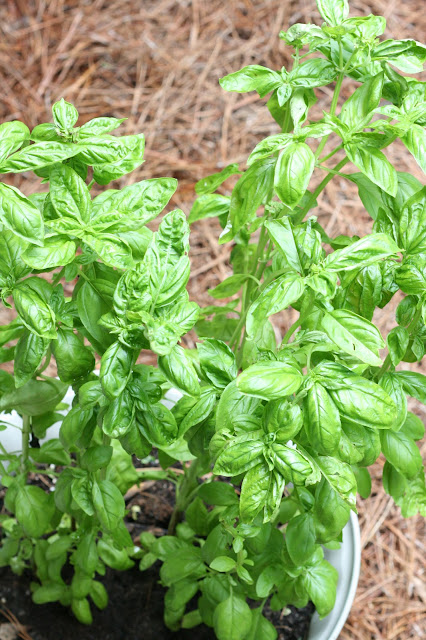 The parsley, though it was nice and full at first, is not doing so great: 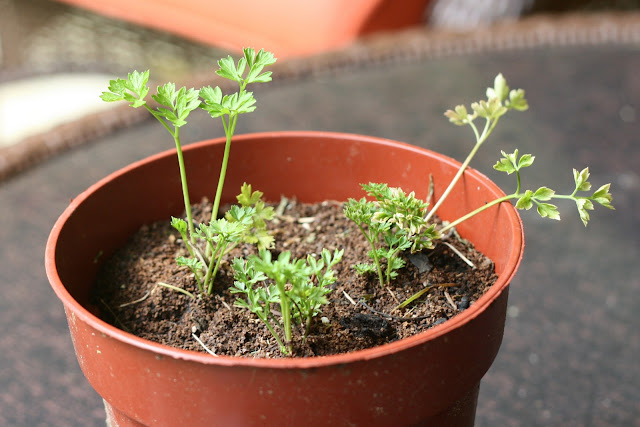 …Given a little too much lovin’ from Joseph. He watered it everyday, filling it up to the top again and again. I’ve nursed it, and it’s coming back. S-l-o-w-l-y.

And then there are the vegetable seeds that Hannah and I planted at the beginning of May. They came in an egg-carton kit my mom gave Hannah. This is what they looked like at one week old: 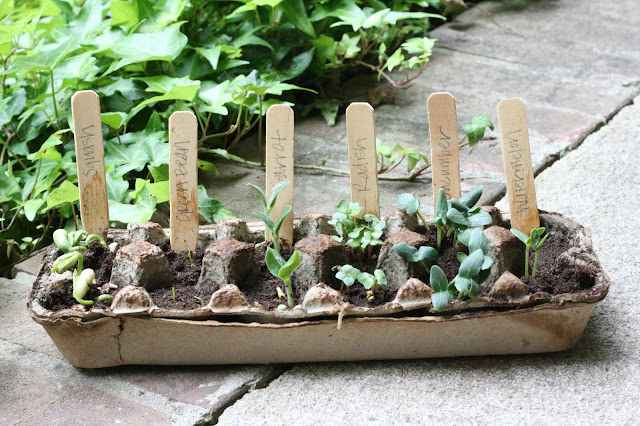 Please disregard the labels. They are incorrect, thanks to a little helper named Joseph. The carrot and green bean are swapped for sure. I’m not sure what else is off…

When it was time, we planted the seedlings at three weeks old. Because of the sunlight we needed to plant in a certain spot in the backyard. The more appropriate places for a garden would not get enough light, and so we used cheap laundry baskets and filled them with mulch from our compost pile, and lined the baskets along the ivy off the back patio. Keeping them well watered, we have watched them grow: 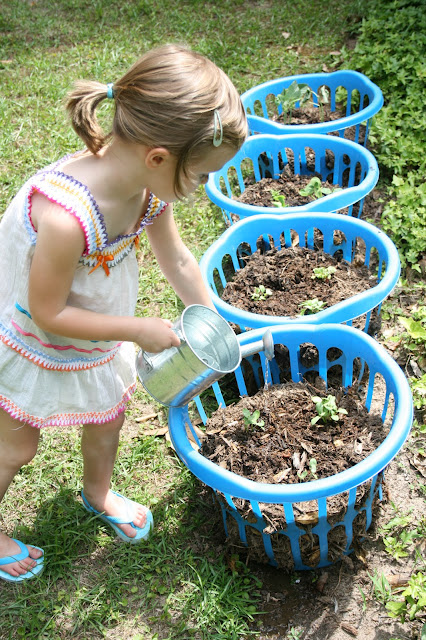 Today, at six weeks old, they look like this: 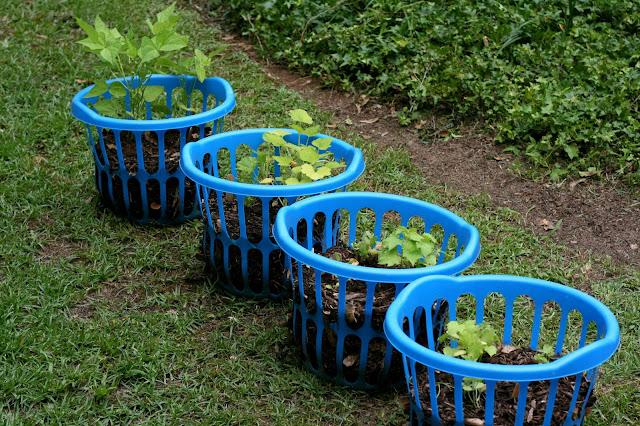 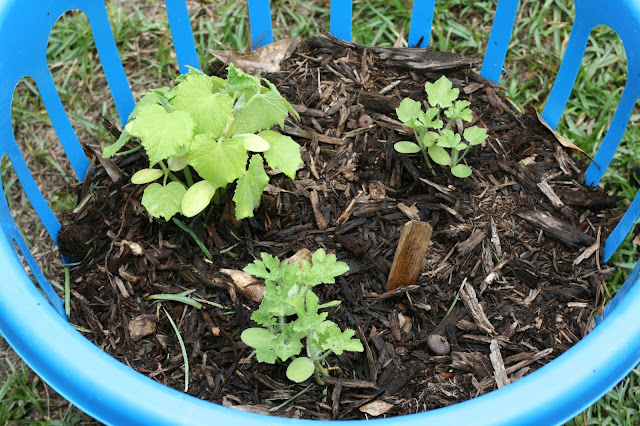 {cucumber on the top left; watermelon on top right and bottom} 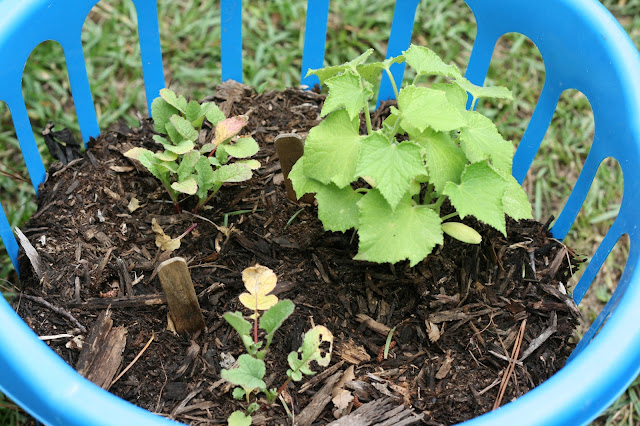 {radish on the top left and bottom (not looking good); cucumber on top right} 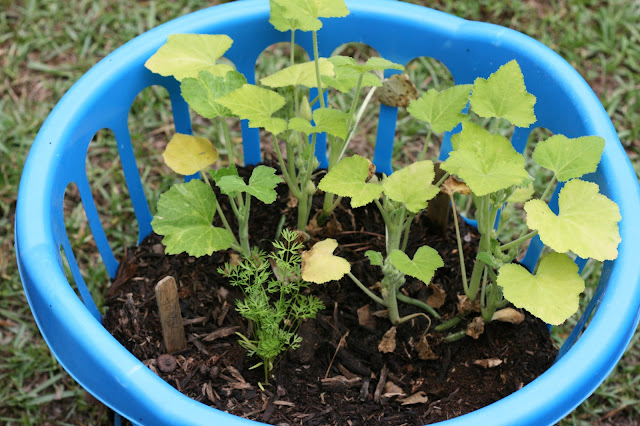 {squash on the top left and right; carrot on the bottom} 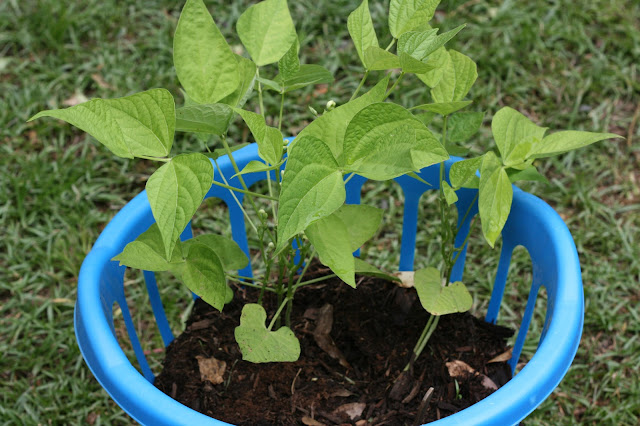 While my mother-in-law was in town she correctly identified them. Thanks, Gran Gran.

As for the lemon tree: 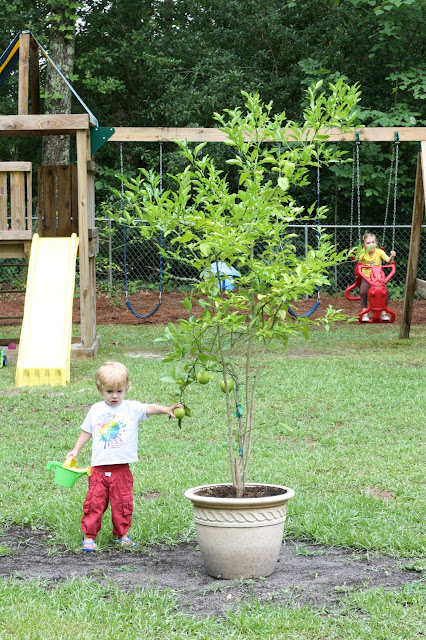 It has been moved from the ivy to a temporary home in the patch of dirt (discussed above) where grass doesn’t seem to want to grow. But our lemons are growing: 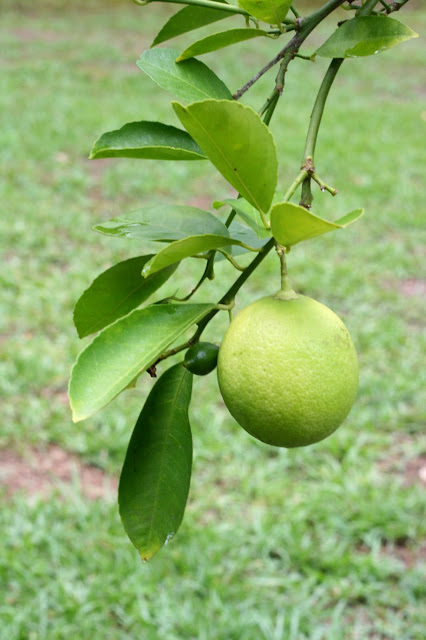 And new ones just came up in the last week or so! 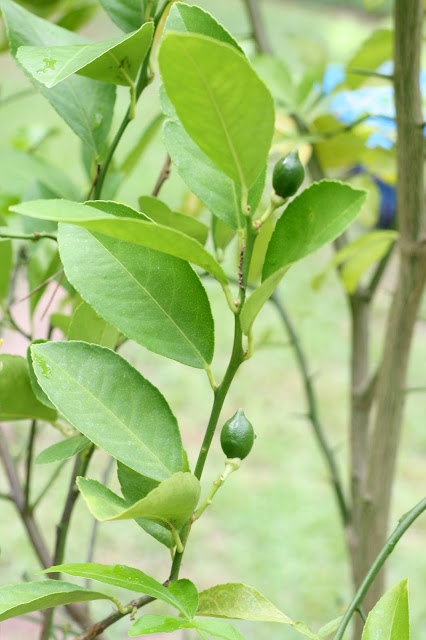 The main “crop” will be ready a little later in the summer, and I’m not sure about these new ones. The Meyer lemon tree is an interesting thing. The fruit grows big and stays green for a while, looking like – you guessed it – limes. As the lemons mature, and have fully ripened they are bright yellow, almost an orangey-yellow.

I haven’t mentioned the fig tree in a while. About five years ago, my mother-in-law took a sapling from our beloved fig tree at our old house in Savannah. We nurtured it and kept it in a pot until we moved to Sandersville, where we planted it in the ground. The placement was the best we could find in the backyard with full afternoon sun. Our fig has not thrived as much as we would like, but it’s doing ok. 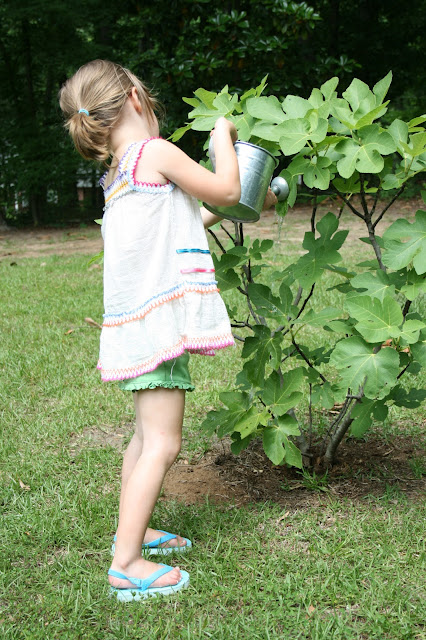 And today there are 13 little figs growing! 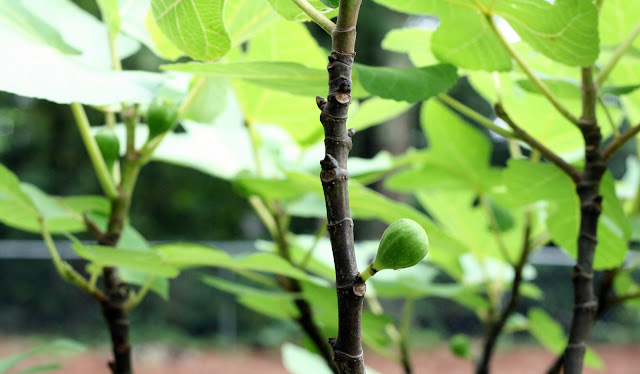 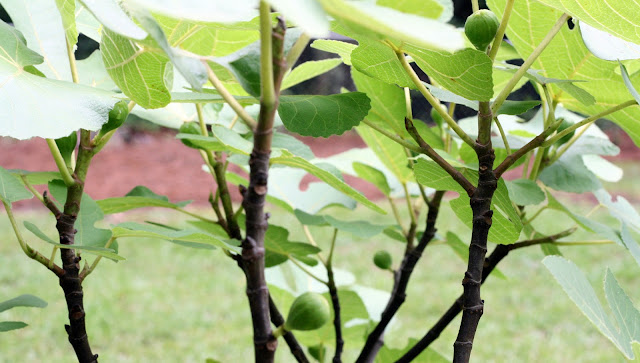 We had lots of yard work done this week. We had to wait a while, but it is beginning to look a lot better. The joys of living in a parsonage include having to go through different people and committees before being able to have anything done. This can be frustrating at times, but it’s easier when you have a good trustees committee – and more importantly, a good chair of the trustees. Right now we are fortunate to have a great one. Still, the process is the same: before any exterior – or interior – work can be completed, the trustees have to approve it. And so, as ridiculous as it sounds (and may be), our bushes could not be pruned without permission. And the bushes both in the front- and back-yards were a little out of control. They got a good haircut and now they look like this: 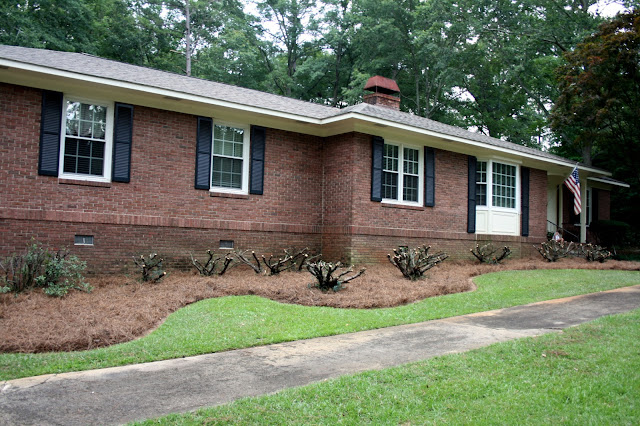 {That’s my little girl on the front steps. And talk about resurrecting plants, below are my geraniums from last year that were as good as dead a few months ago…more victims of J5.} 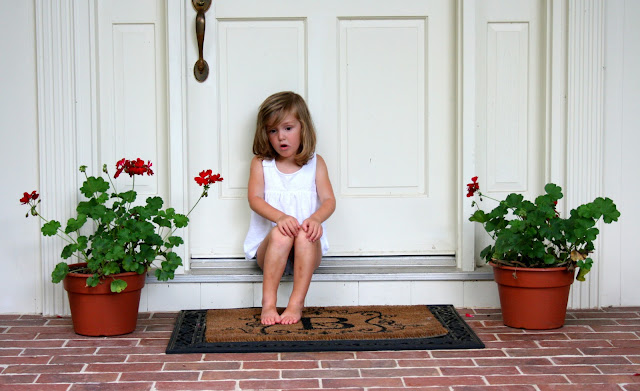 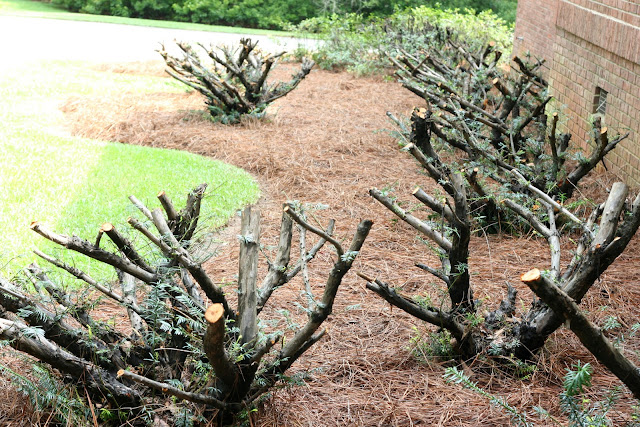 Yes, I realize how unattractive they are, and will be for a little while, but that’s ok. I’m just thankful we got to this point. Most of the bushes along the sides of the house and in the back are azaleas, which grow back easily and fill in nicely. These along the front of the house are a variety of the yew family, and might not come back as well. In that case, we’ll plant new ones all together.

The main purpose of all the landscaping work was not for looks. That was secondary. The main goal was to make the yard better for our family – as we are out there playing as often as we can be. Herbicide to kill the sticker-weeds (lots of “owwies”) and fertilizer to help grass grow in the holes was sprayed all over the yard. Soon we’ll be able to run around barefoot in the sprinklers! Pine straw was laid and other bushes trimmed.

In the back of the yard amidst the trees and along the side of the yard, poison ivy is growing rampant. 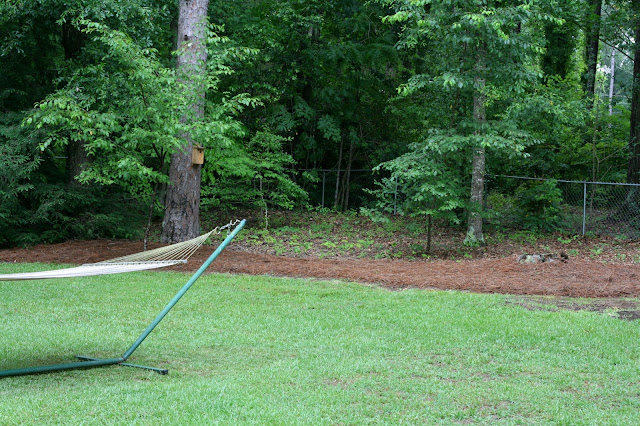 The landscaper sprayed and is diligent about getting rid of that. {Joe is very allergic, I’m allergic, and we don’t know about the kids but assume they are probably allergic.} The ivy off the back porch where Joseph likes to throw and dig for toys was sprayed and will be removed and grass laid in its place. I am so excited about this! The ivy makes me nervous, both because poison ivy has been found growing in there too, and because with ivy always comes a higher risk of snakes. I don’t like snakes. And, quite frankly, the ivy is just not attractive. 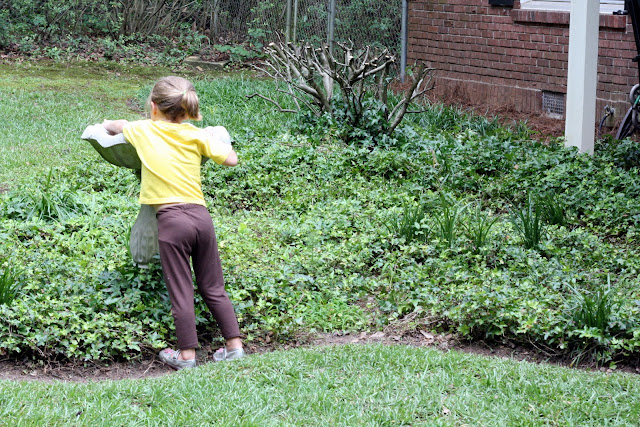 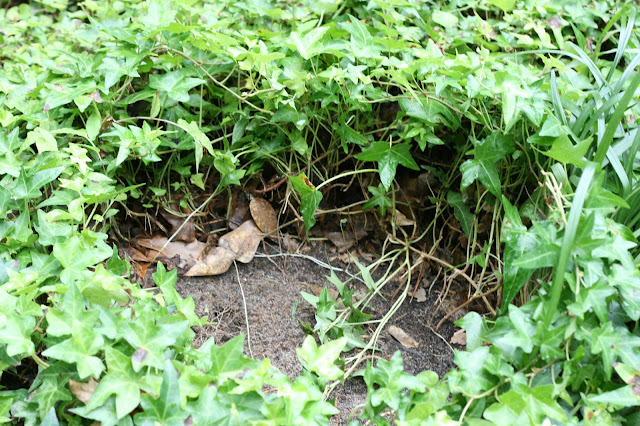 There are a couple trees (small and large) that need to be removed and I’d like to create a border along the back of the yard (mainly so the kids can’t get back there), but also for aesthetics. I’d love hydrangea bushes or something similar and maybe some other flowering plants like lantana or zinnias, shasta daisies or sunflowers (my favorite)…but I am happy with the progress we’re making.

On a final note, this year I bought all the fixins and made my own hanging plants for the back porch. I’m told that that is the less-expensive way to go and I like that I have more control over the type of flowers. This first year with having to buy the baskets themselves, it really didn’t end up being any cheaper, but it was a good exercise, a little project for the kids to watch, and next year I won’t need to buy the baskets. It was my mom’s suggestion (a former and knowledgeable florist) and I’m glad I took it. Definitely a skill I’d like to hone. I chose petunias, impatiens and marigolds. They turned out ok. 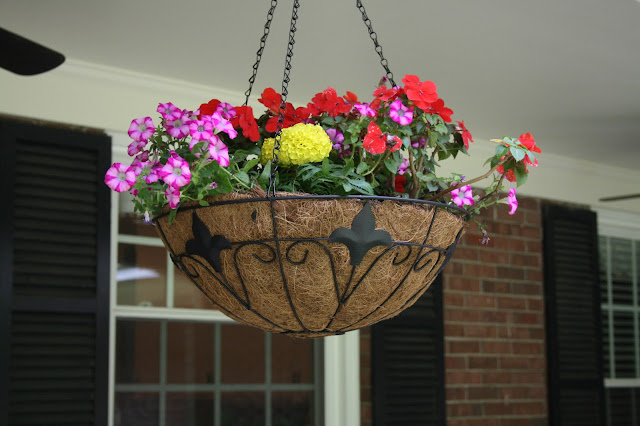 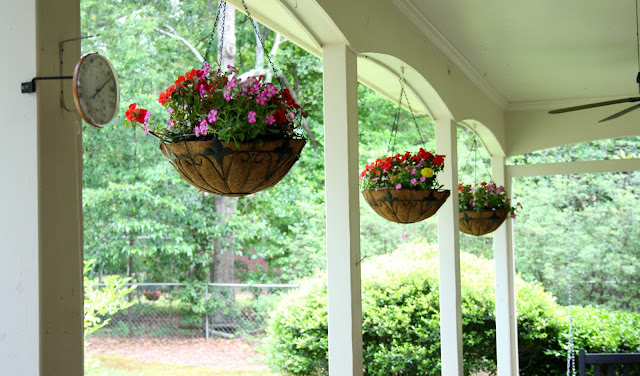 And, except for the marigolds, are holding up pretty well.