Let me tell you a story about this child. 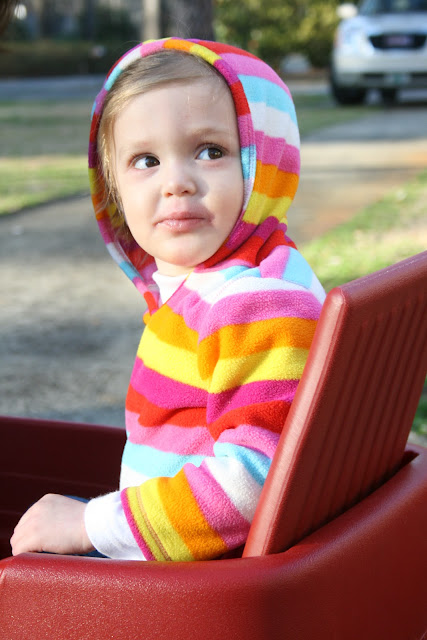 I should start by saying I thought about not posting this. In fact, I’ve been thinking about it for three weeks. For fear of what people may think and looking like an irresponsible mom, I guess. But I can’t be concerned about what people may think or who might judge me when they read this post. This blog is about me, and my family, and this was a significant day in our lives. I can tell you for sure it is a day that I will never forget.

About 45 minutes before this picture was taken, I was out in the front yard taking pictures of Joseph. Yes, when I took that cute little picture a few posts ago of a little 9-month old eating pine straw…

I went to the front yard because it was late-afternoon and the light is better. Hannah wanted to come outside with us and she sat in a couple pictures when we heard Mollie (who had come out of the house, and down the sidewalk towards us). I yelled for Mollie to get back inside, which she would usually listen to, but Hannah said “I put Mollie back inside…” and got up and ran off in the direction of the front door.

I assumed Hannah would do what she said she was going to, so I turned back to Joseph and took a few more pictures. My attention was totally caught up in him as he wanted to crawl around and eat pine straw instead of cooperate. After a couple minutes, I heard a school bus come barreling down our street. {I didn’t know we were on a school bus route and this is the first time I’ve seen one on our street.} I looked back (same direction as the front door of the house) and didn’t see anything, so I assumed Hannah had gotten caught up in Sesame Street which was playing in the living room. A couple minutes later, I decided to head inside.

I ran back outside and checked the front yard, the side of the house, the back yard. Nothing. I was screaming her name. Screaming. Becoming more scared by the second, I called our friend, Anna, who lives about a half mile away in our neighborhood. She picked up the phone. I told her I needed her and that I couldn’t find Hannah, and that was it. She came over and got Joseph, who I had left in the living room before I headed back outside. {I took the risk of Joseph crawling somewhere and getting in danger of his own.} We continued to look outside, calling Hannah’s name.

At one point, and I’m not sure exactly the timing and order of things, I went in the backyard of the house next door. The house has sat empty for a long time and the yard is a little overgrown. There is a rusty swing set and a workshop. I had the thought that maybe Hannah wanted to scope that out. I had the thought that maybe she was in that workshop, maybe she had gotten locked in or was trapped. Still nothing.

I ran across the street to where the Smiths live. They are an older couple and usually home. I beat on their door and was out of the carport before they could even answer. I yelled that I couldn’t find Hannah and would they please help. Where was she?

I had grabbed my cell phone when I went back in the house and tried calling Joe. But Joe was on his way back in town and I knew he would be helpless. I came very close to calling 911. But I don’t think I could admit to myself that I couldn’t find my child. Did she fall down? Was she hurt? Could she not hear my screams? What about that school bus? Did someone else drive by and pick her up? Where was Mollie? Were they together? Every thought imaginable crossed my mind. The thoughts were terrifying.

My mouth went completely dry and I could barely take a breath. Finally I saw her. Standing down a little ways in the empty semi-wooded lot next to the Smith’s. Not visible from our yard. There she was in that bright striped pullover hoodie. Mollie was a few feet away. I don’t think I will ever forget that sight. She was so still, looking at me. I have to tell you, I thought I was dreaming. I ran to her, crying. {And that’s the part she remembers. Later when Joe would ask what happened, she would answer “Momma ran. Momma cried.”}

About two minutes later, standing in the Smith’s front yard with them, Anna, and Erin and Kristen (who had run from their house when Anna left in a hurry), Joe called me back. He was pulling into our neighborhood. Everything was ok. I however was not.

How could I have let my guard down? How could that have happened? I watch my children like a hawk in public. They don’t leave my sight in parking lots. Hannah walks right around the car and stays by me as I get Joseph out. They stay in the shopping cart when we’re at the store, unless Joe is with me too and we let Hannah walk for a bit. But you could definitely say that I am over-protective. At home, my walls aren’t up I guess. I let Hannah play in her sandbox and in the backyard as I do stuff in the kitchen or elsewhere where I can keep my eye on her. She’s never tried to leave the fenced-in yard. Anytime we go out in the front yard, she doesn’t leave my sight. She might want to run around, but there are rules she follows. Every day when we go to check the mail, we walk to the end of the driveway, hold hands and “Look left. Look right. Ok?” before we step into the street to get to the mailbox. {Another takeaway: when Joe asked her how she crossed the street, she answered “Mollie look left. And right.”}

Later, putting the pieces together and looking at the time on the photos I took, I figured out that Hannah was gone somewhere around 15-20 minutes. With all the scary thoughts and images rushing through my mind, that is forever… {Last night as I wrote this post and Joe and I relived that day, I thought maybe it wasn’t that long. Maybe it was more like 5 minutes and seemed like 15 or 20 that she was gone. No. I checked my cell usage. It was 17 minutes exactly. And Mollie? Did she protect Hannah? Was she somehow aware that Hannah was in trouble and stayed with her? This is the dog that abandons everything to chase after a squirrel, yet she was there right beside her.}

And for the rest of that day, and laying in bed that night, I thanked God. I was grateful. My baby girl was safe. I learned a valuable lesson. I don’t like to admit when I screw up. I want to be the best mom I can be. But none of us are infallible. I know with children you can never let your guard down. Hannah is a very curious and strong-willed child. I have my work cut out with her. I was overwhelmed with panic when I thought something might have happened to her. I can’t even let myself think of the what-ifs.

I just love her so much. 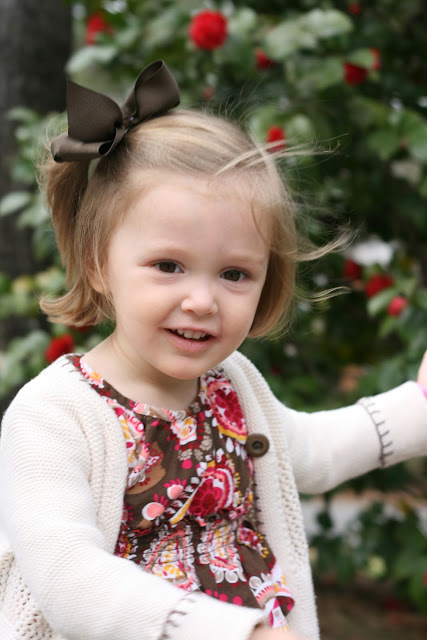 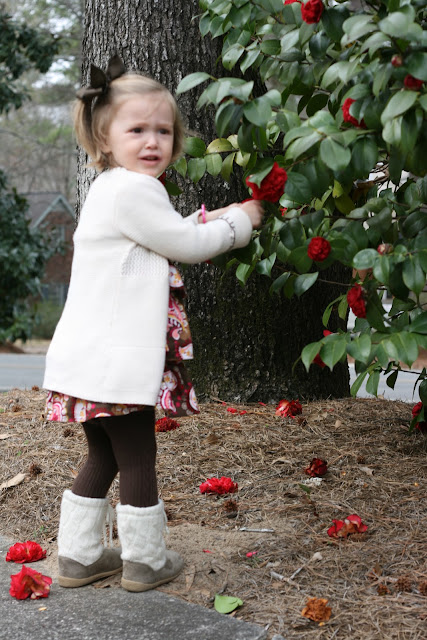 (upset because she couldn’t pull the camellia off the bush…) 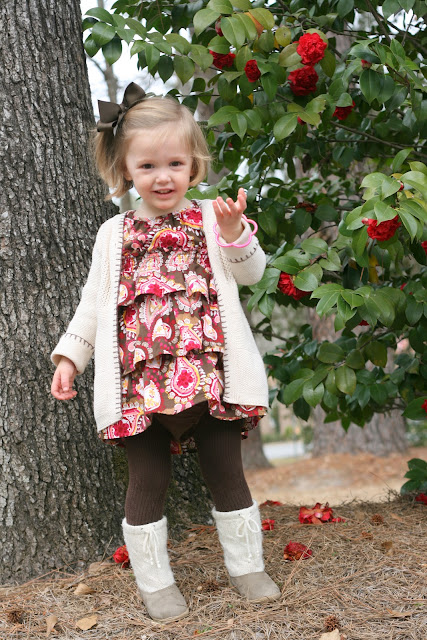