{In case you missed the previous nursery posts, they are here: one, two, three, four, and five.}

Well, this is way overdue. The last nursery post was two and a half months ago. I haven’t done much of anything since then, but it has taken a while for me to take pictures and blog about it. I kept putting it on the back burner so I could blog about more current events {when I actually had the time to blog}.

Since Joseph has officially moved in to his room, I thought I should get my act together. After all, I know you can’t wait to see how it all came together. Right…? So, without further ado.

I did not want an over-planned space. I was hesitant over any “theme”. I really wanted the room to be a collection of things we like, appropriate for a baby, but having the ability to morph into a boy’s room when Joseph is a little older. This nursery took almost a year to come together (ideas swimming around in my head for quite a while), but we did move in the middle of it so I’m not going to be too hard on myself. You could say the room has a something-old-something-new-something-borrowed-something-blue theme. I used a mix of old and new, rustic and refined elements, and nautical accents. I like natural textures and a neutral color palette. I found the bedding and worked around it. 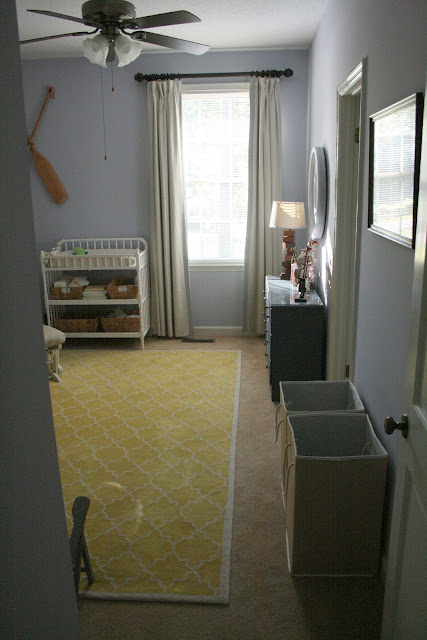 Upon walking into the room, this is your view. The door on the right wall is the jack-and-jill bath that connects Hannah’s room. The window is on the front side of the house.

The rug is one of my favorite things about the room. It is a Moorish tile rug from Pottery Barn. I don’t think they sell it anymore. I fell in love with it years ago. It was in our living room in the last house, but matched the trim on the crib bedding perfectly. 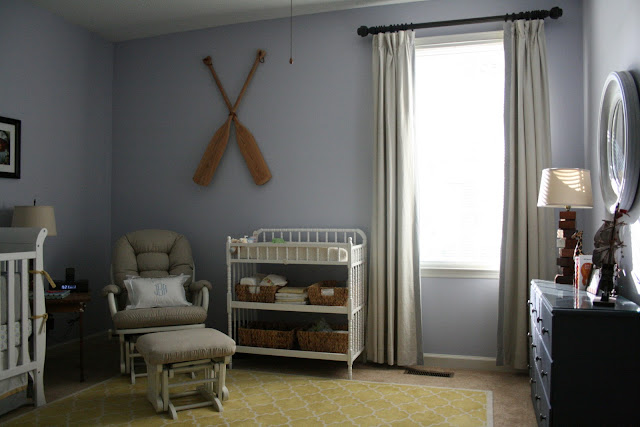 There you see where the oars made their landing. My handy husband hung those up. I wrote about the glider in a previous post. Both that – with new cushions – and the changing table came from Hannah’s nursery. I switched the white rattan baskets for natural sea grass ones instead.

The window treatments were done by a church member here who is a seamstress. {Though Ann insists that she is not a professional, I think she did a great job.} I went with a casual, but tailored, pinch-pleat design with a standard rod-and-ring system. Ann tucked drapery pins in the pleats for easy hanging. As for fabric, I chose a natural linen for the body and a slate seersucker for the trim. I asked for the three-inch band of seersucker to be run on the bias (diagonal) along the leading edges. 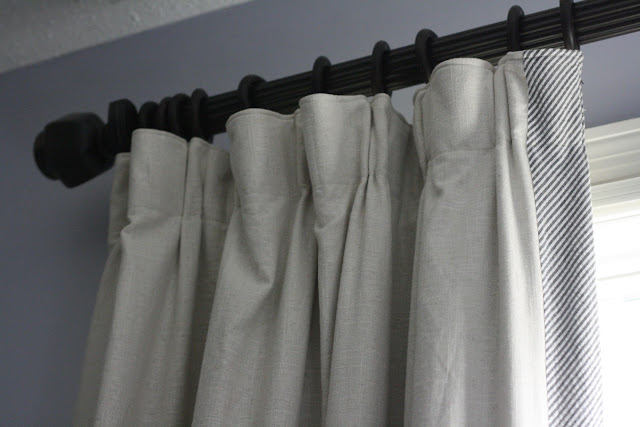 Due to the bright and hot afternoon sun, I had the panels made with black-out lining. The obvious benefit to that is that the room gets completely dark, unlike Hannah’s room which is so bright. Dark room = more sleeping. Theoretically… 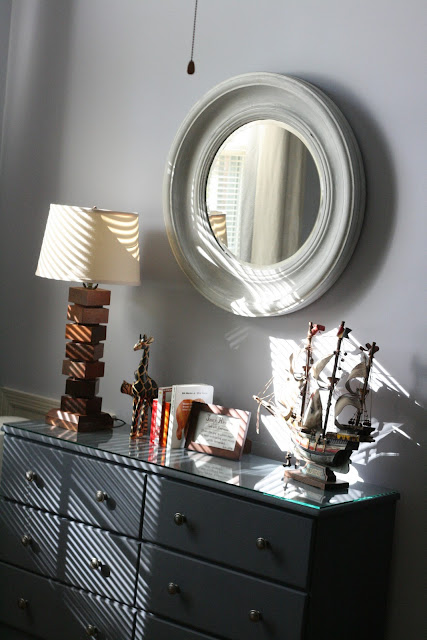 That is the mirror I found while at Scott’s a couple months ago. It is solid wood, heavy, and I love it. I took my time looking for the right mirror so it was the last thing added to the room. It is exactly what I had envisioned. The two lamps in the room were made by Joe’s grandfather, Joseph Alexander Buck, Jr., who also made several other things in our house. Each square on the shaft rotates. I love having original pieces mixed in with store-bought ones. And while we are on that subject, there is the dresser that I gave new life to. I found the little giraffe and cat while traveling years ago. I can’t recall where at the moment. My mom might remember. The cross-stitch was a gift and has Joseph’s name along with “God will increase” and the Bible verse, “From the one to whom much has been entrusted, even more will be demanded.” {Luke 12:48} Such a good verse… The ship came from my dad’s model collection. 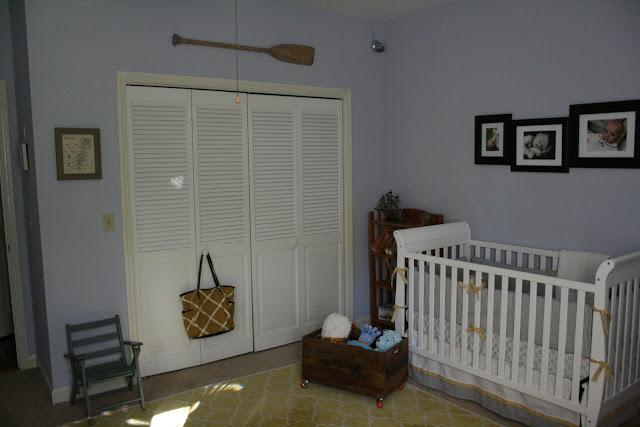 There, above the closet doors, is the first oar I found at a yard sale. I intended to paint it so Joseph would have something in his room that I did like Hannah does, but for now it’s just a plain old weathered oar. The frame to the right of the closet is a cross-stitch of the Georgia coastline that was done for us as a wedding gift. You can see where the vintage rolling crate ended up. A nursery must also be practical, hence the camera. 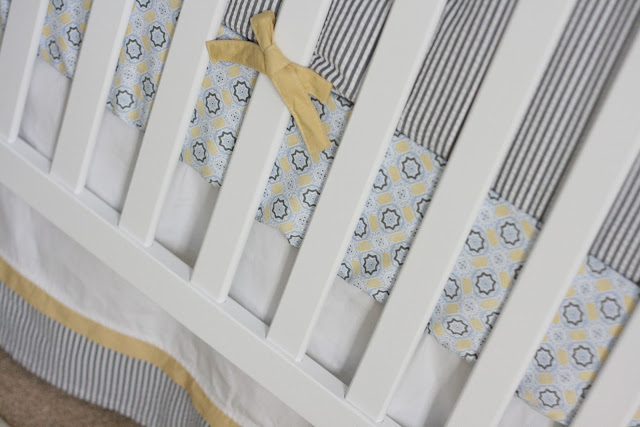 I love the bedding. 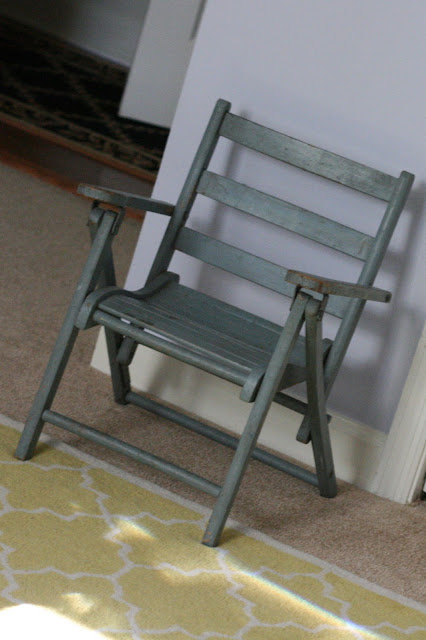 I found this chair at an antique store in a small town right near us. I knew it was meant to be Joseph’s the second I saw it. 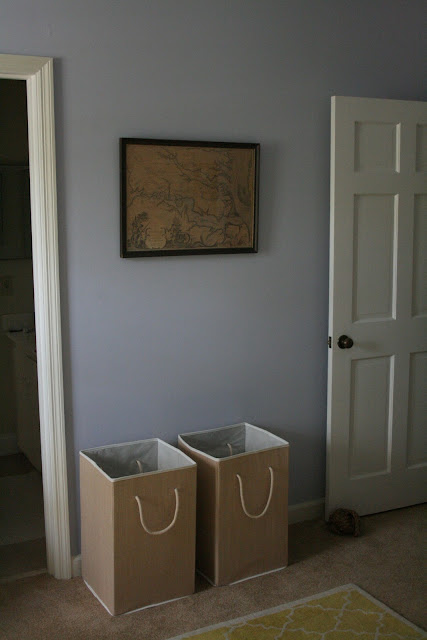 As my Dad was downsizing to move out to the Pacific Northwest, he gave a lot of stuff away. I took this framed historic map of the Jamestown/Williamsburg area of Virginia.

And there are those hampers I found at Target. Whites go in one, colors in the other. When they are full, I pick them up by the rope handles and dump the clothes in the washer. Makes doing laundry relatively simple. 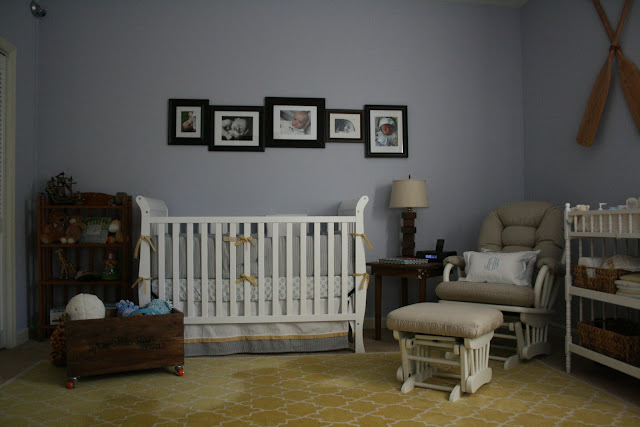 The shelf to the right of the crib has some toys and gifts we have received. Finally, I wanted some photographs of Joseph on the wall. I decided to hang the frames directly next to each other so I would have room to add more as time goes by. I also like the aesthetic. The frames are both dark-stained and black-painted wood.

Besides the monitor and necessary pieces of furniture, the most important thing in the room is sitting there on the side table: the iHome. Joseph and Hannah both listen to the ocean as they sleep. Joe and I are strong believers in the benefits of white noise we read about in Happiest Baby on the Block. Since their births, not a day has gone by when we have not used it.

And that’s Joseph’s room. The photos are darker than I anticipated, but you get the idea. Now…on to the next room. {And it will not be a nursery!}

« seven months
i got to meet the twins »