Can I just start by saying how tired I am? A pregnant woman needs sleep. (And this pregnant girl is really bad about going to bed late. Read: new year’s resolution.) Well, Hannah has given me no breaks in that department.

So week before last, two Mondays ago, I decided to take Hannah’s pacifier away for good. She only had the pacifier in her crib and during long trips (like to Savannah) in the car, but still we thought it was getting to be time.

I didn’t exactly plan the scenario of how it would all play out, but the day came and I just did it. She was in a great mood, content and happy all day. I put her down for her morning nap and she went right to sleep with no problems. That night was about the same. Tuesday was a little bit bumpier. She fussed a little in her crib, but settled herself. At this point I’m thinking that this is going waaaaay too smoothly. The rest of the week went pretty well considering. A few times I did have to listen to some severe fits coming from down the hall and over the monitor, but eventually she’d work it out and fall asleep. On a couple of occasions I felt like a horrible mommy, child sobbing with buckets of tears and runny nose.

Back up. Did I mention that I did this while Joe was in Kentucky? Yeah… He was spared all the drama. It’s ironic actually. When we talked about taking the pacifier away, he joked about me doing it while he was away. (He’s in school at Asbury in Kentucky.) And then I did.

So fast forward two weeks and, while we are still having some problems going right to sleep, the main issue is this: she’s waking up way. too. early. I guess she’d wake up before, but then she’d hunt around her crib for her pacifier and then settle herself back to sleep. And then she would sleep until 8:30 or so. I’m not kidding. We got 12-12 1/2 hours every night from her. Now she’s waking up about two hours earlier that she used it. Not a huge huge deal, but not good either. It’s every day. I’m exhausted and the worst part is she’s exhausted too! So we’re dealing with a tired, fussy toddler.

I feel a little bad complaining, but not really. You get used to a routine and then you function off of that. We go to bed pretty late, and I like to read once I get in bed, so it would be midnight or later. Let me just add that, ask my Mama, I’ve always required more sleep than the average 7-8 hours a “normal” person needs. On top of that, when I’m pregnant I really need sleep. My energy is totally drained by mid-afternoon and nighttime is when I recharge. I am not a happy camper when I haven’t had enough sleep. You other pregnant moms know what I’m talking about. A toddler is quite a disruption to good rest.

I am trying to get better with the whole “sleep when she sleeps” thing. But other stay-at-home moms out there know that it’s not that easy, especially if you have to fit work in too. There are a million things to do and I live for the quiet hours when she’s napping to get some things done. But in a few minutes, I will be heading to the bed when I put Hannah down for a nap.

So to the point of this post: dress up.

Already? I mean, I knew the time would come. But already? Hannah has always liked things around her neck – beads, clothes (clean or dirty, no preference), scarves, belts, bags…umbilical cords. For real. She came out with the cord wrapped around her neck. Twice. She also likes to put things on her head and has recently taken a liking to blankets, headbands and hats. I’ll be in the kitchen, at the computer or elsewhere and I’ll go to find her like this: 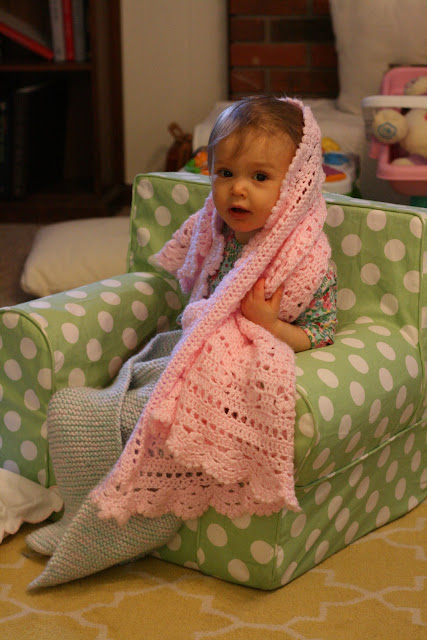 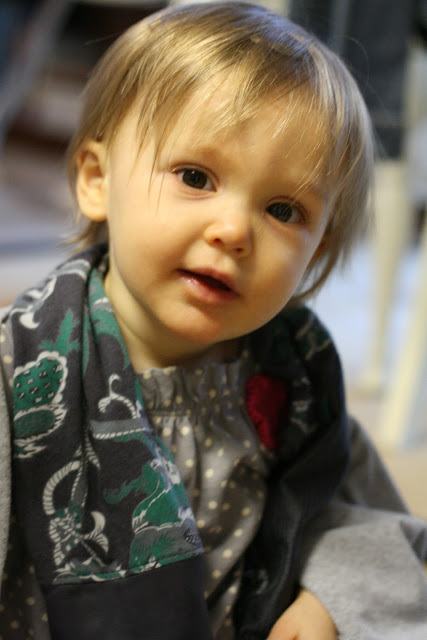 She’s 16 months by the way. I have a long way to go in the wonderful world of dress up. Bring on the high heels and tutus.