So this is the first “solid” we decided to try.  We thought it would be easier on her tummy than a green vegetable, a little sweet but not as sweet as fruit.  (You’re not suppose to start with fruit anymore apparently because it gets the baby used to sweet things and is less accepting to bitter tastes.)  Carrots.  I like them enough.  Joe likes them.  Hannah, however, isn’t so much of a fan.  Could have been the texture.  Joe pureed them nicely, but she’s used to milk, formula, or rice cereal.  Guess the substance was too foreign.  So, 2 days (4 attempts) of supplementing two feedings/day with carrots.  Now, I do have to stop right here and say that the second time we gave them to her she did actually eat several bites.  In general, she said “Get that stuff out of my face and give me milk” or something like it.

Yesterday I got creative.  I had had it with the advice I’d been given: give her the veggie after a bottle or nursing; give her the veggie then follow with a bottle…etc. She didn’t care when I gave it to her – hungry or not – she wasn’t having any.  Sneaky me… Yesterday, after another failed attempt with carrots by themselves, I was frustrated but still wanted to give her some solids.  She generally likes rice cereal (especially when it’s mixed with breastmilk), so I made her some.  She ate it up – 1 tbsp.  Gave her another.  Ate it up.  Then I thought to myself, “How ’bout adding some pureed carrots to this rice cereal?” GENIUS. We scraped the bowl clean.  I now have my plan of attack (and just as a friend commented to my Facebook post with this idea!).  I will gradually reduce the cereal and increase the carrots.  She will eat carrots whether she likes them or not.  Because that’s what we do in this family.  (Right, Uncle Pete?)  Ok, we won’t really be that mean.  She is a baby afterall.

On a side note, carrots stain.  I find traces everywhere.  And I’m such a clean freak.  Perhaps even a little OCD at times.  Here I am wiping off her bib because the carrots are messy.  Instead of waiting until the end of the feeding, I clean up throughout the process.  I might get over this…might.  So the carrots stick to her fingers.  I find them in her creases, inside of her clothes, all over the highchair, and of course the floor.  But the most interesting part of this carrot adventure is the DIAPERS.  Wow.  I mean really.  I’ve never smelled and seen something so interesting.  I’ve smelled some pretty bad things in my life, but not exactly coming out of my child!

Tomorrow we’ll start another vegetable.  And we’ll keep on keepin’ on.  Until next time… 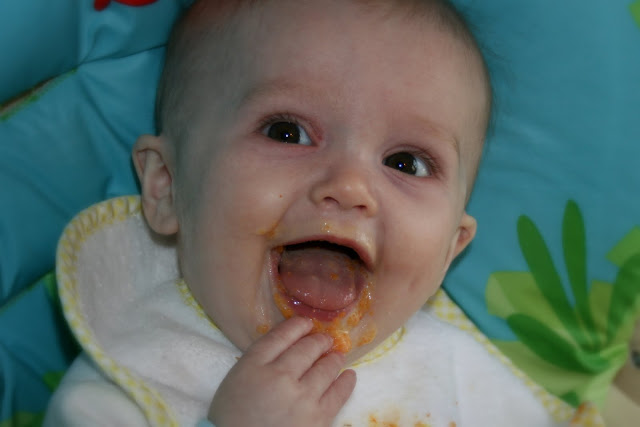