In the few days before school started, I ticked off a couple of my summer goals. Might I have mentioned my propensity to procrastinate?! I finally got the French braid down to the delight of my girl who’s been keeping her hair long for the purpose of fun hairstyles (and also to be like me, which I can’t help but love). 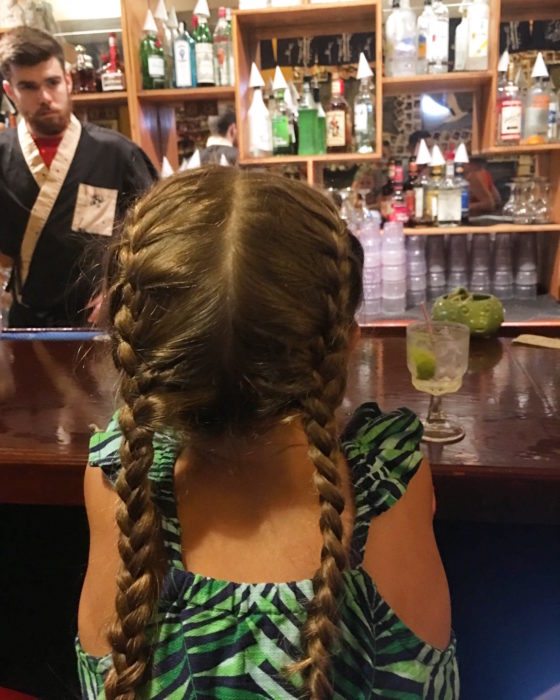 Also, I made my first homemade pie (cherry) and Hannah helped. It was both exciting and infuriating (the crust part). I did lose my cool once or twice. But most importantly, it was delicious. Now, I need to work on technique…and making it look prettier. 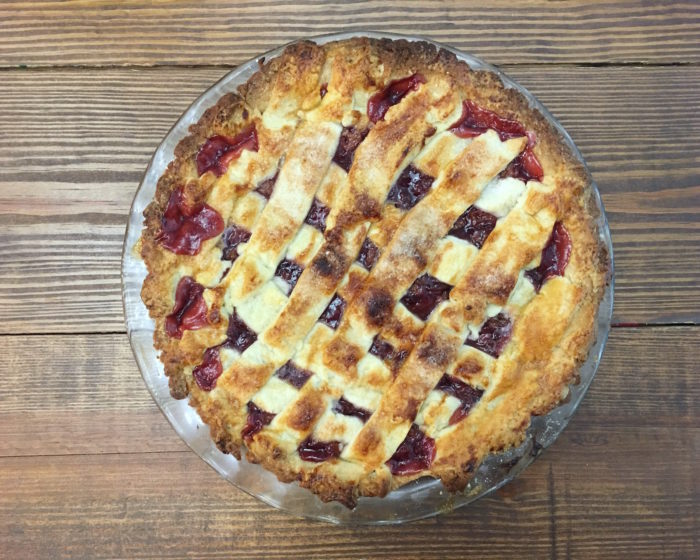 I didn’t exactly write down a summer bucket list, but those are two things I (and my sidekick) really wanted to do. 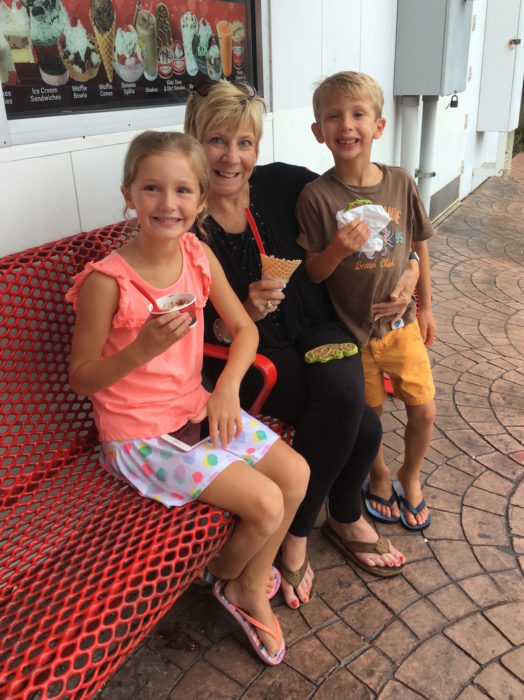 The weekend before school started we surprised the kids with a visit from my mom and filled two days with end-of-summer fun: ice cream, pedicures, school supplies shopping (not sure this counts as fun for me, though still exciting – have you experienced the chaos in those Walmart aisles?) and a dinner out at a “cook-on-the-table” Japanese steakhouse (which was great until Joseph had an allergic reaction to the shrimp that was being cooked and started coughing and having trouble breathing – we know he can’t have shellfish, but apparently the smoke was too much for him and perhaps his reactions have intensified…?). 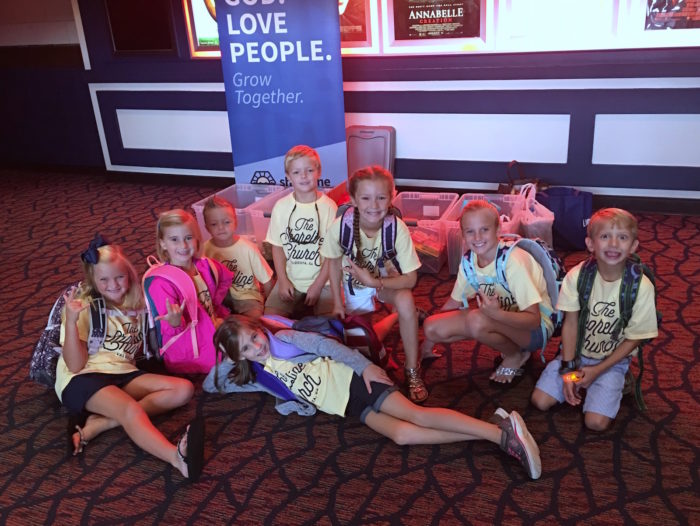 We also had our Backpacks and Blessings day at Shoreline, where we prayed over all of the students and teachers and collected a bunch of school supplies for kids in need. That afternoon we piled on the sofa and watched Pete’s Dragon – just the four of us. That movie is so good and a little sad and a great one to cuddle up and watch together.

Anyway, it was a good weekend.

First day of school signs were made. New apple banner strung over the table. Backpacks ready. Clothes picked out… 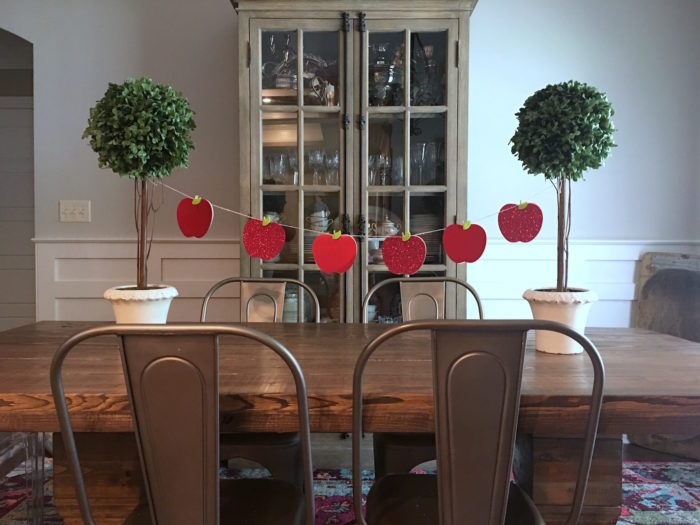 We brought battery-operated apple lights from Target to give to the teachers at open house. Just a little something to “brighten” up their desks… 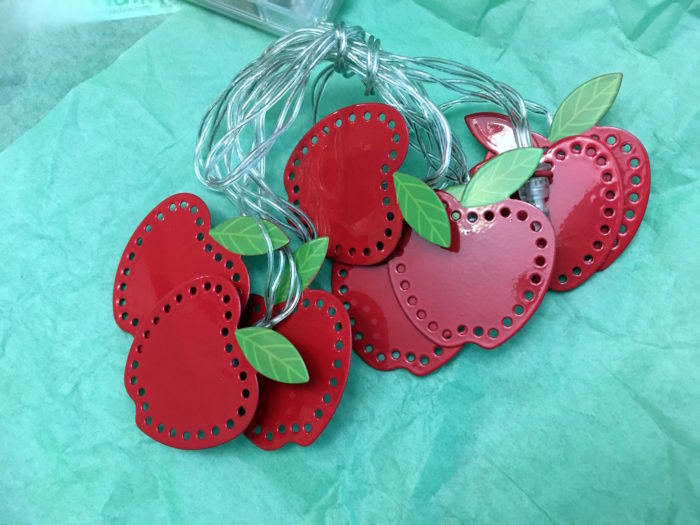 …and because we have a thing for those little LED string lights. Meme buys them for the kids for different occasions. They each have some strung in their rooms and are currently lit every night until I turn them off before I go to bed. Presently, Joseph has his normal blue ones hanging on his dresser as well as his – and his sister’s – apple ones on his (very-full but perfectly-him) bookshelf… 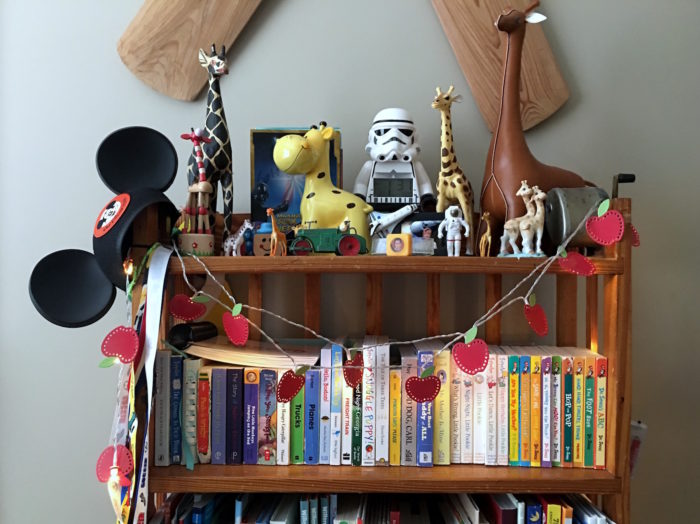 The first day of school came on Monday, August 7th. They were both SO excited. 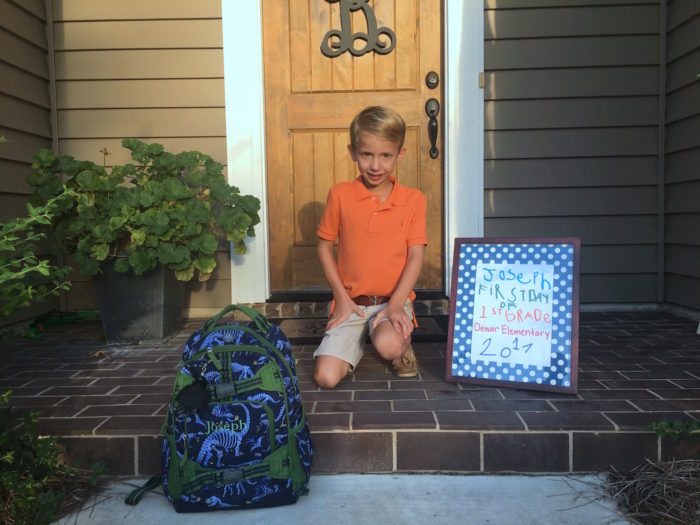 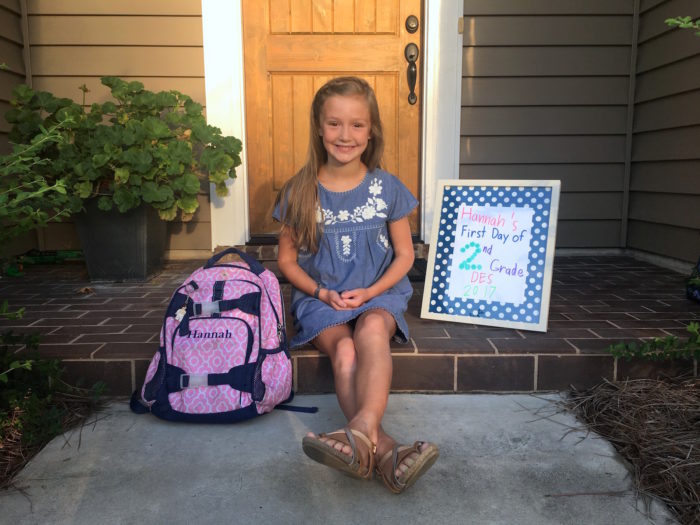 We’ve made these signs since Hannah started pre-K. I have them do as much as they can by themselves and this year that meant most all of it. Hannah is a little perfectionist and got frustrated when I wouldn’t let her re-do it for the third time, and Joseph just wants to be done, but they turned out cute all the same. I take one of their Pottery Barn gallery frames from their bedrooms, back the white card stock with the same navy polka dot paper (that I keep inside the frames), and stick it in long enough to display for a few days.

I walked them in the first day, but after that it was to-and-from school on the bus. I was so happy when I found out how late the bus picks up in our neighborhood…and how they get dropped off much earlier (and therefore don’t have to ride around on the hot bus as long). Last year I drove them to school and they rode home. They were beside-themselves-excited to get to ride both ways. And, thankfully, they love it still. From my Instagram stories: 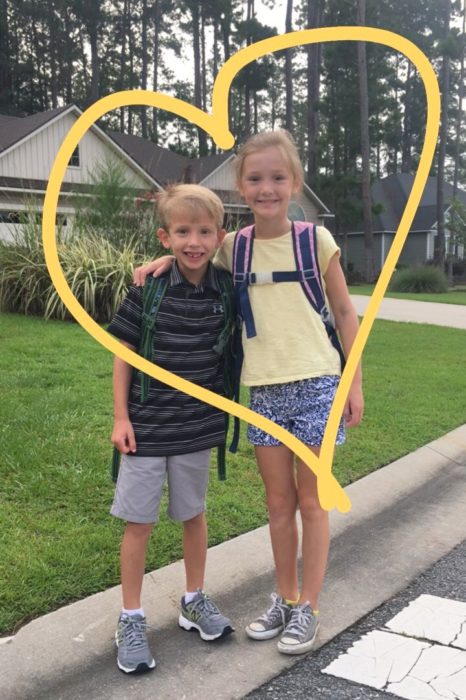 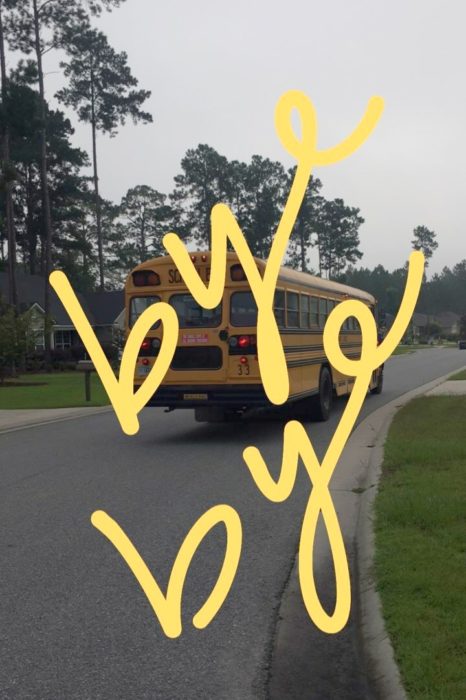 Fun for them and easier for me. Certainly a win-win. Mollie dog loves this new routine, as she gets to take part. In the afternoons, we wait for them to come down our street.

Three weeks in and we are settled into the school routine. Waking up earlier – me even more so (insert emoji with the eyes wide open, eyebrows raised). The alarm on my phone goes off at 6:15 playing a nice soothing worship song by Bethel. Love the song but still, hard to get up some days. I get it, that’s not that early, but it’s an adjustment nonetheless. The summer brought wake-up times of 1-2hrs later. The kids are up by 7, Joseph almost always much earlier, and the morning craziness ensues.

I like the idea of calm, sweet mornings where everyone is happy, rested and getting along – and rushed? absolutely not, right on schedule… Nope. Not the way it typically goes around here.

I am mostly organized. We set out clothes the night before. Papers are signed, backpacks are by the front door. Inevitably, there are hiccups. People moving slowly, too slow. Kids whining about getting dressed or making their beds, wanting lunches or certain hairstyles. Sibling bickering about who’s doing what or not doing what, who’s bed hasn’t been made, who’s sitting on what stool. Me, everyday, prodding them to eat, stop arguing (or staring into space), and move faster, reminding them to take their vitamins, medicines, brush their teeth, get their book bags/lunch boxes/AR books left out…and maneuvering them out the front door for the school bus pickup all the while looking forward to my next cup of coffee.

Though frustrating as it can be in the moment, when I remove myself from the “organized” chaos, the daily soundtrack is almost comical. If you have kids, this is probably familiar. If it’s not, then please tell me, what are your superpowers!?

I do try to make the mornings as upbeat as I can. I want to send my kids off on a good note. This is why I wake up earlier than they do. I need the quiet. The calm before the storm. Those people that wake up at 5am? Truly amazing, inspiring, but not me. I currently hustle to be in bed before 10, and I’m an 8-hour-minimum kind of gal. So 6:15 it is for now, and that gives me just enough time to get dressed, make my bed, fix a cup of coffee, and have some quiet time with God.

Come to think of it, I don’t think 6:15 is early enough… No, not enough calm-before-the-storm.

Maybe next week, I’ll try 6am.

Several mornings over the past three weeks, I’ve had a little one climb into the chair next to me and offer their version of quiet while I read and pray. One might want me to read aloud or pray with me. One might sit quiet for a second and snuggle, squirm for a little bit, then decide they’d rather get down and play with Legos. You can probably guess who’s who. 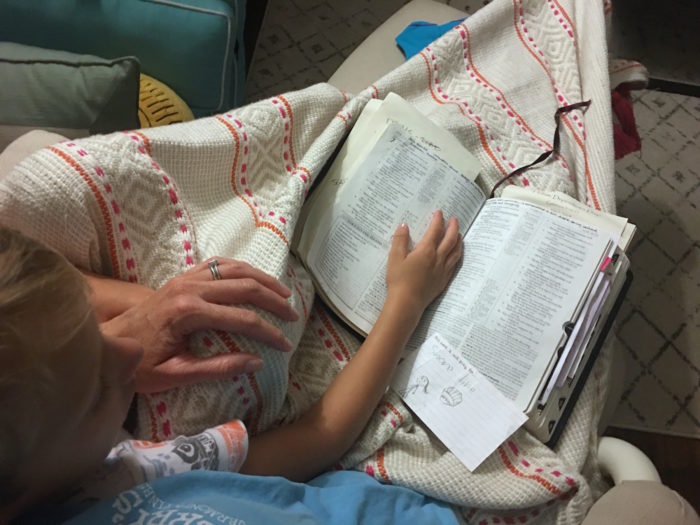 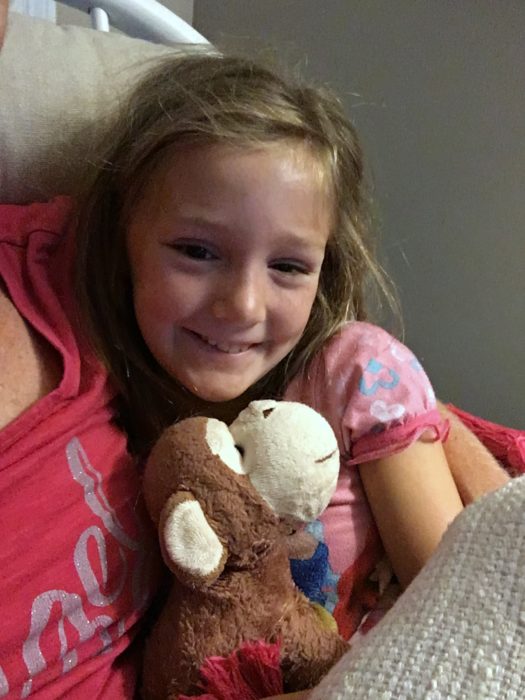 Whether I am interrupted or not, starting my day with God is always worth it, and it usually shows in my patience level. If only until the third time I ask a kid to do something.

Ready or not, right?

In closing, this year the kids’ teachers sent home papers asking us to fill out some info that included: words to describe/things they should know about our child, as well as our hopes and goals for our child for the year ahead. Parent homework if you will. But I liked this, a chance to give the teacher a little glimpse, intro…heads-up. I appreciate the interest and effort.

Three words to describe her: creative, compassionate, and outgoing.  Two things to know about her: She is a perfectionist and can be hard on herself. and She likes to lead and help others. Sometimes too much! One wish for her: That she will follow Jesus and be encouraged to become the person He created her to be.

On Joseph’s sheet I wrote:

He is curious, asks lots of questions, and wants to know how things work. We like this about him and encourage learning. We want him to learn to read… (Getting Joseph to practice sight words can be like pulling teeth.) Socially, Joseph does well. Being kind to others, and compassionate, as well as trustworthy, are the attributes we are trying hard to instill at home. I tell him everyday to “Shine for Jesus” and we pray he does.

They go to a public school. And, yes, I brought up Jesus.

If following Him is the most important thing I want for my kids, I want the teachers to know this. I am praying hard for my children, but also for their teachers. Not only is their job hard, but they can make a tremendous impact on these little people (who spend more waking hours a day with them than they do us). If their teachers can be positive role models and encouragers in the ways of these character traits, I am forever grateful.

One of my very favorite scripture passages is Matthew 5:14-16:

You are the light of the world. A city set on a hill cannot be hidden; nor does anyone light a lamp and put it under a basket, but on the lampstand, and it gives light to all who are in the house. Let your light shine before men in such a way that they may see your good works, and glorify your Father who is in heaven.

I pray, and we pray together as a family, that we will shine this light – His light – into the world. That others will see Jesus in us and, because of that, be drawn to Him. I pray that Hannah and Joseph will be the people God created them to be, strong and courageous, loving and kind. Wherever they are and to whoever they are with.

Honestly for me, in these impressionable years, academics is secondary…