My sweet boy has been through a lot. Over the past four years for sure, and recently over the last couple of weeks. At his four-year well check on April 20, his pediatrician was concerned about several hard places in his abdomen. Of course, knowing his GI problems, we knew what those hard places were: stool. An X-ray confirmed what we already knew. He was significantly impacted. Anytime a doctor uses the word “impressive” you know it’s bad. Look how bloated his little belly is: 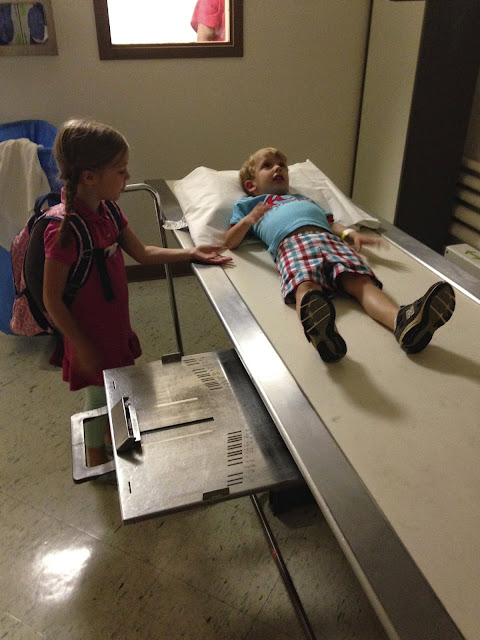 After a lengthy telephone conversation between our pediatrician and the pediatric GI, we were directed to start a rigorous clean out. Enemas, magnesium citrate and a high dose of Miralax for three days. Ugh. We knew how miserable that was going to be…for all involved, but especially for him.

Yes. It was completely miserable. He screamed and cried and we prayed and prayed. But we got results. Big time! 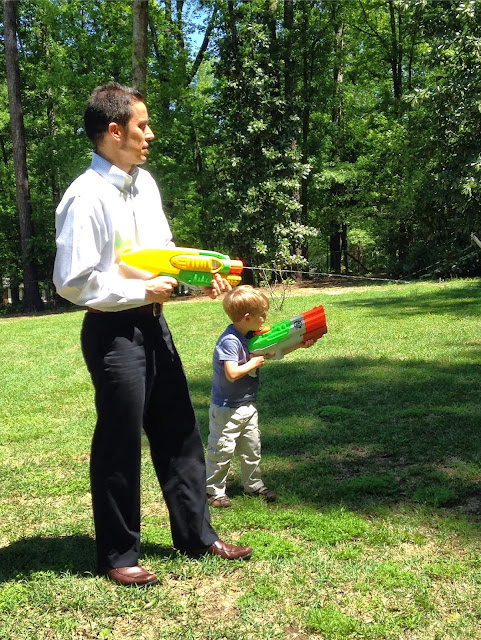 We had lunch picnics outside almost every day. He and Daddy even practiced shooting with the new water guns. We cuddled and endured. He was a trooper. 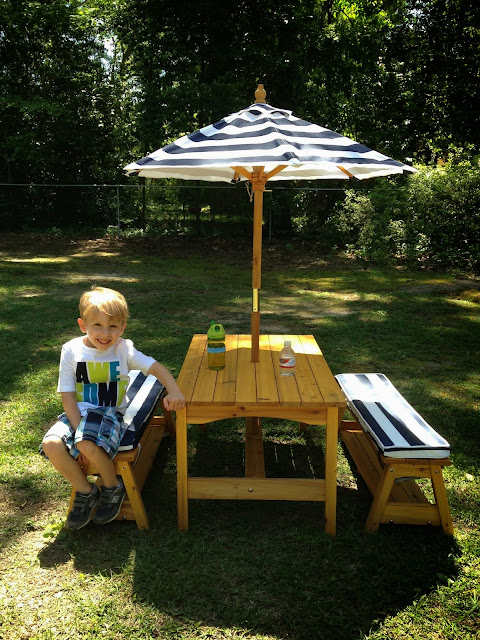 The doctors talked to us about Joseph possibly having Hirschsprungs disease. It is very rare, but the symptoms are very close to those of chronic constipation which is what Joseph was diagnosed with from the beginning. Hirschsprungs is a congenital condition where part of the colon is missing nerve cells. When that nerve tissue is missing, the child does not have the ability or has great difficulty in passing stool. Surgery is required to remove the diseased part of the colon. It is major surgery.

The reason Joseph has not been tested for Hirschsprungs before is because the actual testing is very invasive, requires putting him to sleep and taking a rectal biopsy. We just did not want to do that until we thought there was a good chance he had it. Our course of action was to complete the clean out, continue with the increased Miralax dosage, and encourage him to use the bathroom every day. We scheduled an appointment with the GI in Savannah for May 4.

Following the clean out and leading up to that appointment, in an incredible answer to prayers, Joseph went on the toilet 8 days in a row. This was HUGE for him, and unprecedented. We’ve done many clean outs before, but have never had anything resembling normalcy in the days following. Or at any time for that matter. He has always struggled…

At one point during that time we joined Joe on a visitation trip to Milledgeville. While Joe was at the hospital I took Joseph to TJ Maxx to find shorts. He has a tiny waist so it’s tricky finding shorts and pants to fit in waist and length. He’s also had a bloated belly most of his life causing his pants to get pushed down. {Side note: he runs really well with one hand holding up his britches!} With him doing so well, we were relieved as his belly got smaller and smaller.

He might wear a size 2T in shorts, but look at that flat stomach!! 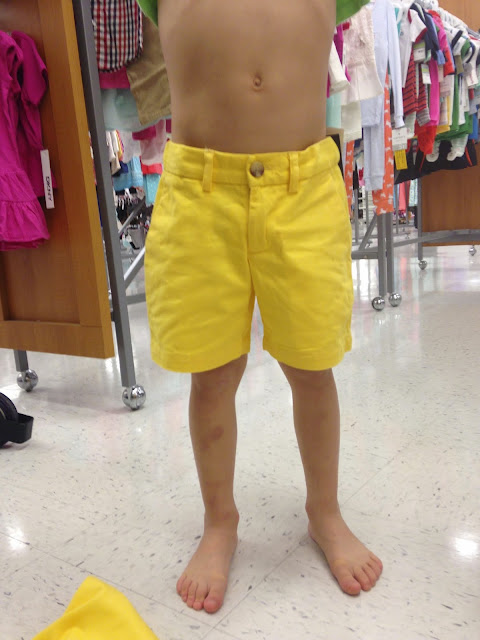 You have no idea how happy that picture makes me!

At the GI appointment on May 4 (this past Monday), he had the best X-ray he’s ever had. His belly was almost completely clear! We also got to see his actual doctor. The past several visits we’ve only seen NPs. Our pediatrician was emphatic that we see Dr. Rittmeyer himself.

Well, we had a great visit. There is a toilet in the exam room and the doctor got to see Joseph go. {Probably too much information, but when tracking poop habits is your life, and it’s a constant topic of conversation, it’s easy to lose your grip of what’s appropriate to say in public!} Anyway, he is very happy with where Joseph is. He is still confident that he (just) has constipation and will one day grow out of it. No further testing needed at this point. Keep on doing what we’re doing and encourage him as much as possible.

It was such a relief to have a good visit, we could have all cried. Joe and I almost do when bathroom trips are successful. We are so incredibly grateful for all the prayers lifted up for our son and know they are working!!

So thankful that “Thank God!” has been a common phrase lately where Joseph is concerned. 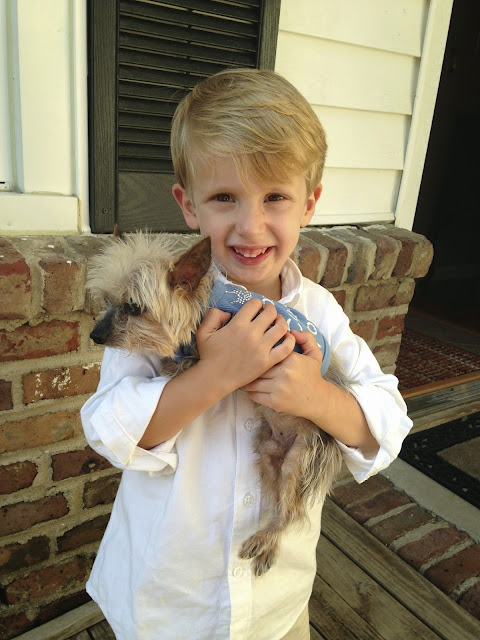 {Joseph with Spenser in Savannah}
In other Joseph news, he wore his first neck tie and suspenders and was twins with Daddy last Sunday. I still need to learn how to tie a tie, so we had to stop by Daddy’s office before Sunday School. 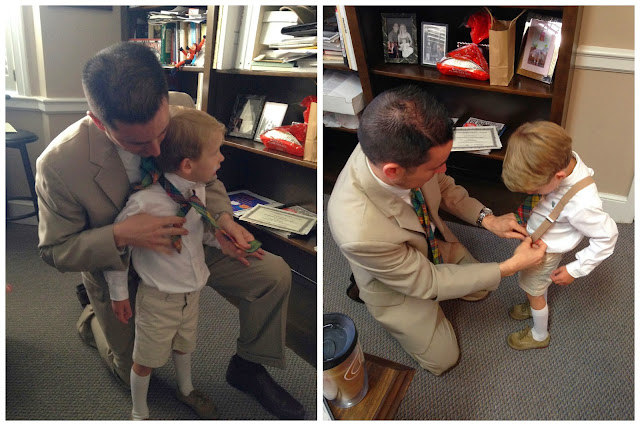 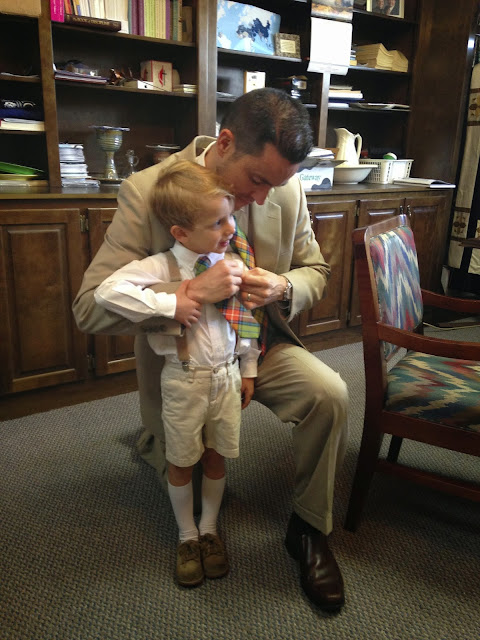 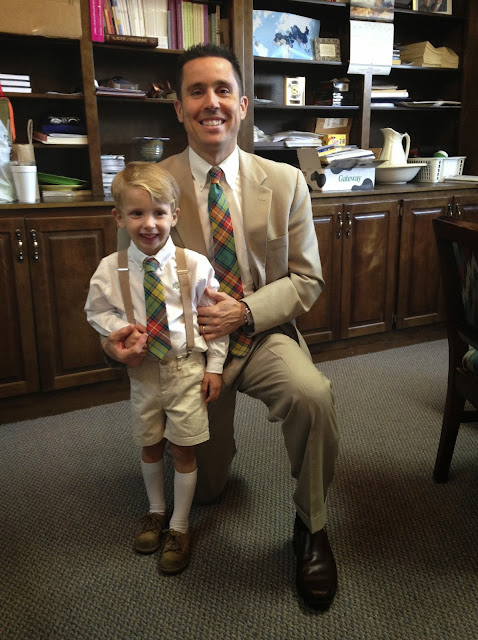 Totally in love with my boys.