You probably don’t have to scroll down too far to see a picture of Raffie. The little giraffe lovey, “Ra-ee” as Joseph calls him, is a most-treasured possession. But good old Raffie gave us a scare. He was lost/left in Savannah when the kids came back from Meme’s.

Raffie is arguably the most important thing to remember after Hannah and Joseph when packing the car. And while Joseph had Raffie with him while he was “helping” Meme load up, he didn’t make the final trip out to the car with his BFF. It was after the kids were back in Sandersville when we realized Raffie was nowhere in the car. Raffie could be in a parking lot or driveway…or anywhere. Not a good situation! So after I sent out an amber alert and while a hunt ensued, it was imperative that Joseph had a Raffie as quickly as possible.

Let me tell you how grateful I am to have connections. And by that, I mean a mom who used her Amazon Prime account to order another Raffie which I received the very next day. Thank goodness…one night was hard enough. After tucking Joseph in his crib, giving him a couple of other plush toys (horrible, I know…nothing compares to Ra-ee), I kissed him goodnight and walked out of the room. On the monitor for a while I heard, “Ra-ee?….Raa-eee?!” 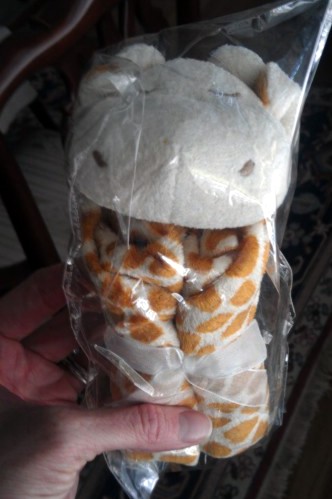 I unwrapped that puppy – er – giraffe and threw it in the washing machine so quick. Joseph was napping and I wanted him to see it when he woke up. When we took it out of the dryer, it was not as grand an event as I thought it’d be. I was half thinking he would know the difference. But, I guess he was just so happy to see a Raffie, that he didn’t notice. He hugged on and carried him around like usual.

Joseph and Raffie II are pretty much like Joseph and Raffie I. But the really good news is, the original loved-and-cuddled-with-since-birth Raffie has been found and Joseph will get him soon! Thank you, Uncle Will Will! I think I’ll be hiding this one, giving it a little wash-and-wear occasionally, and keeping it for such a time as this.