Recently, I discovered that Joseph loves to blow out candles.  If there was one lit on the kitchen counter or on a living room table, he was adamant about blowing it out (as hard as that can be for him…you’ll see). He would make gestures and noises and say “oh no!” until I reassured him that the thing on fire was ok and supposed to be that way.

So, I had a revelation at lunchtime one day: I could get him to take bites of food if I let him blow out the candle. Considering the difficulty we’ve had in getting him to eat, I made this an incentive. It’s Joseph and me, his food, a candle and a lighter. I know this seems strange, but I am eager to make mealtime more enjoyable. {We still cling to the belief that because of his long-standing GI issues, he associates food and even being at the table with unhappiness and discomfort.} The candle provided a distraction for him. The candle also provided good old-fashioned entertainment for me. 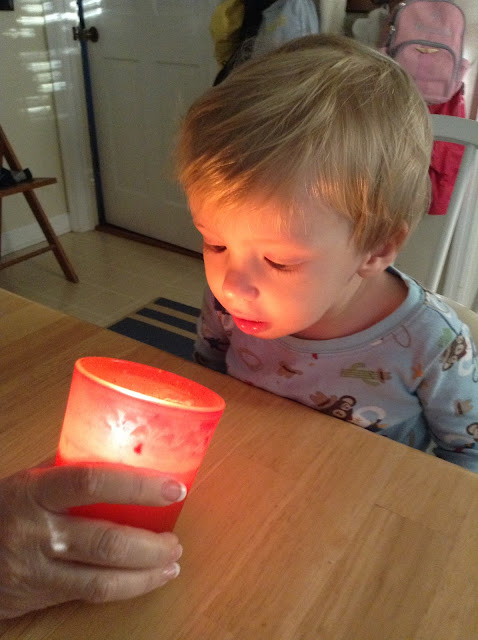 Meme came to visit during this short phase of candle-blowing. That’s her in the video holding the candle and laughing while I film. I lost my voice around this time, so excuse the hoarseness.

He is satisfied  long enough to clap before he wants me to light it again.
Thankfully, things are better. There is no candle present at the table, and Joseph’s willingness to eat has improved since this video was recorded. Now that his GI problems are managed by medication, and we are not desperate for him to gain weight, he is conforming to our hard-and-fast rule: you eat what’s in front of you, or you don’t eat. Now, we just have the stubbornness to deal with! But, hey, we also have Hannah, who could teach a course in stubbornness.