Sunday, was the fall festival and trunk-or-treat at the church. {I took lots of pictures so I tried to condense with some collages.} We had a grand ol’ time. 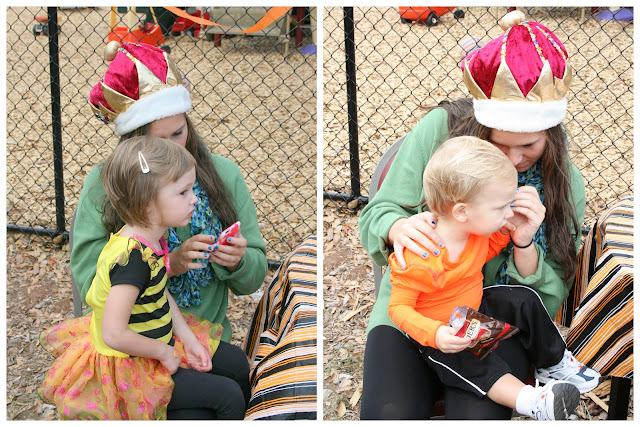 We jumped and ran around in the Mickey Mouse Clubhouse jump thing. 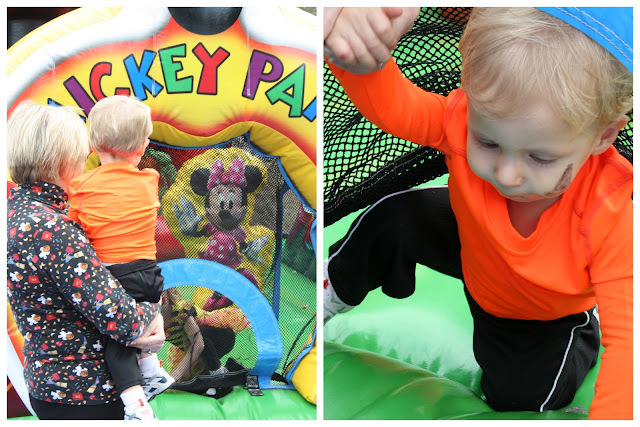 Joseph didn’t care for it much, but he liked watching Hannah from the safety of Meme’s arms. 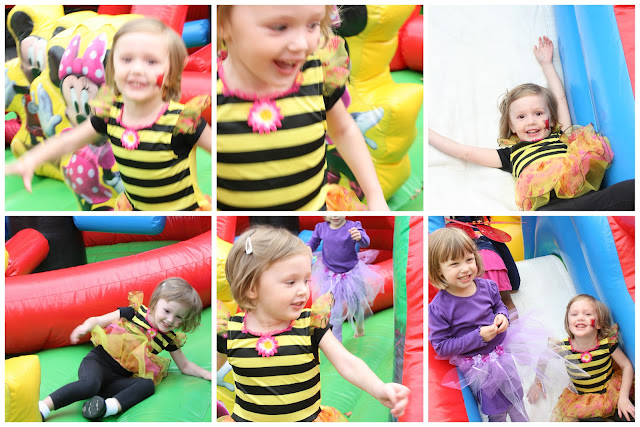 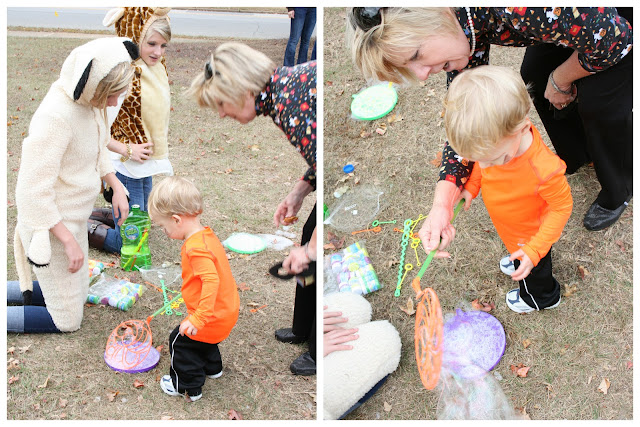 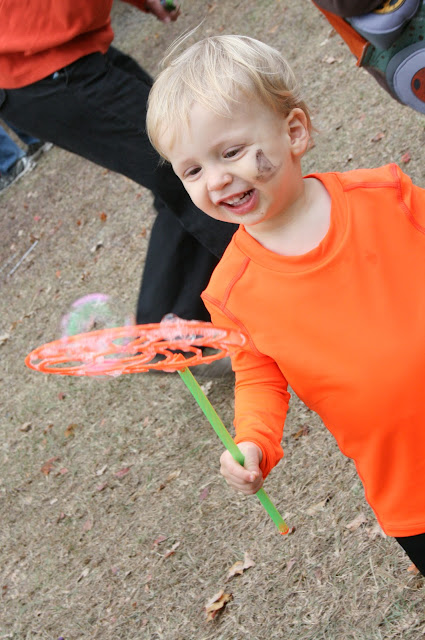 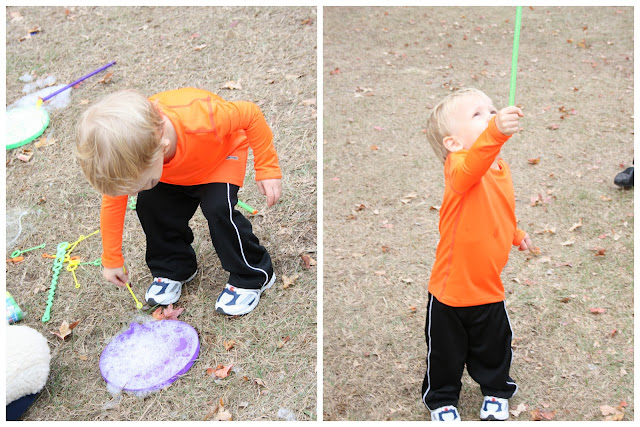 Then we scared Mommy and went down the big (BIG) slide. All by herself. She took her shoes off, crawled up on the thing and started climbing the stairs. Without even a pause, she slid down. I didn’t even have time to get my camera in position, much less stop her! She looked terrified, but thankfully did just fine and wanted to have a go at it again. This time I was ready: 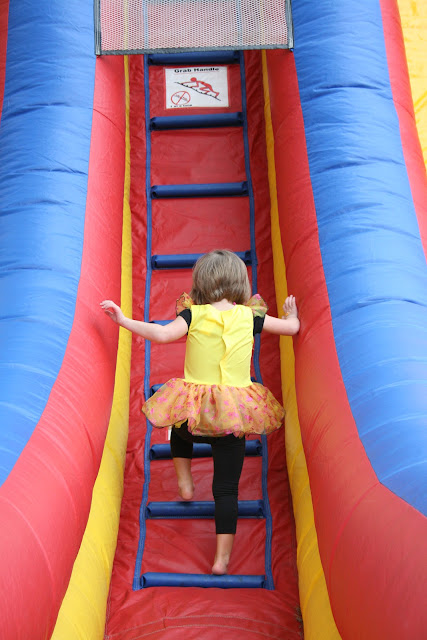 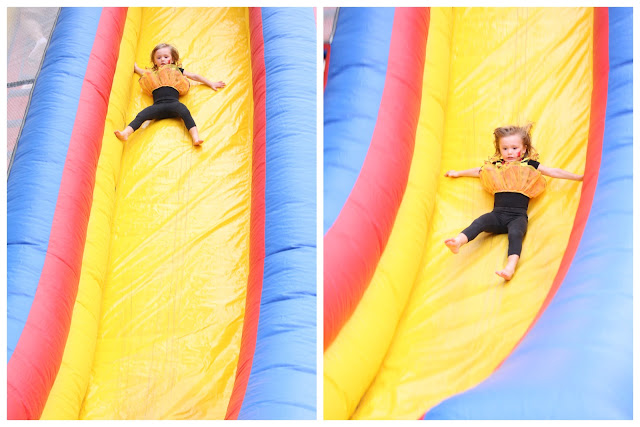 And then she decided, again all on her own, that she was going to do the obstacle course. 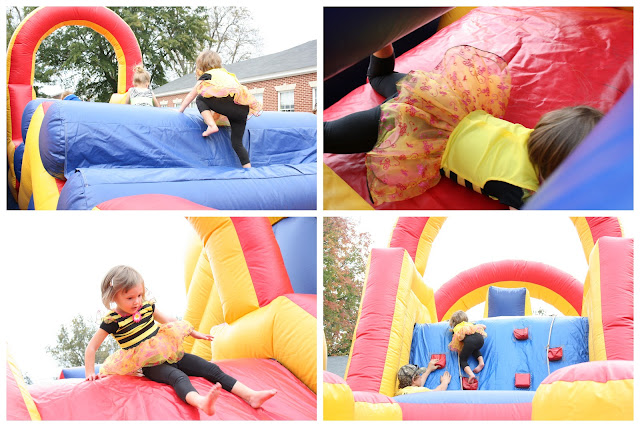 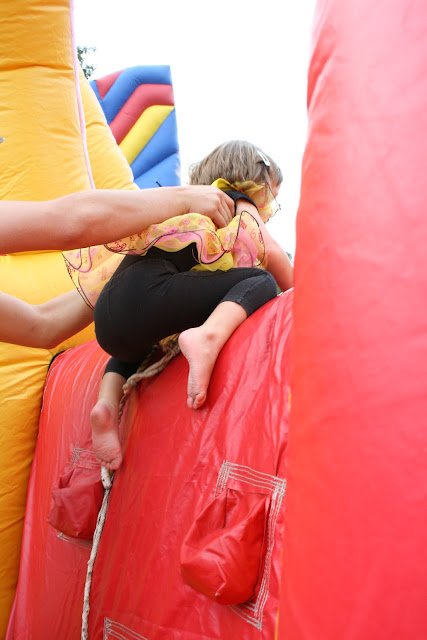 but I was impressed. Joseph acted like maybe he wanted to give it a try… 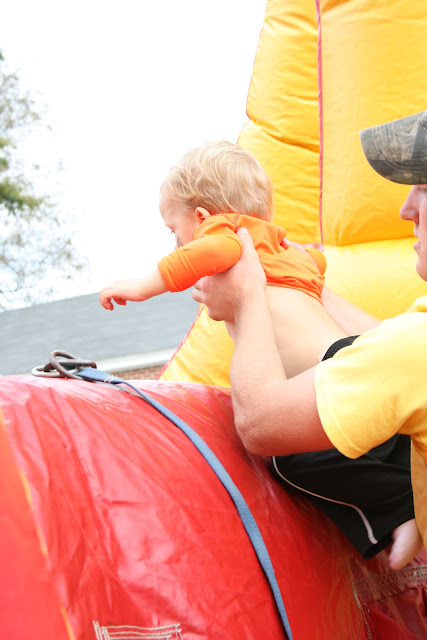 …but that didn’t last long.

We did a race theme for the trunk-or-treat. Joe was the race director, I was the runner, and Joseph… 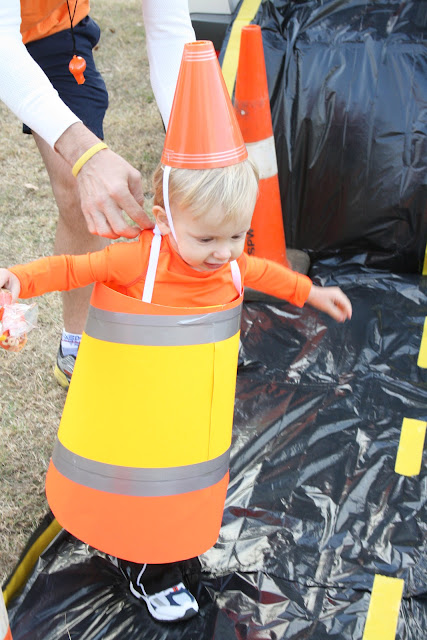 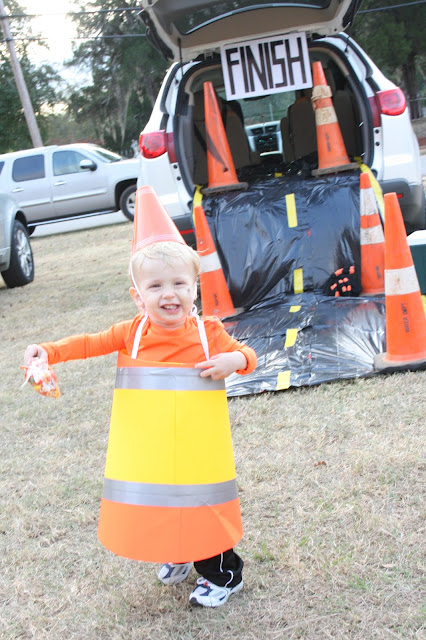 was a traffic cone. Homemade costume, thank you very much. 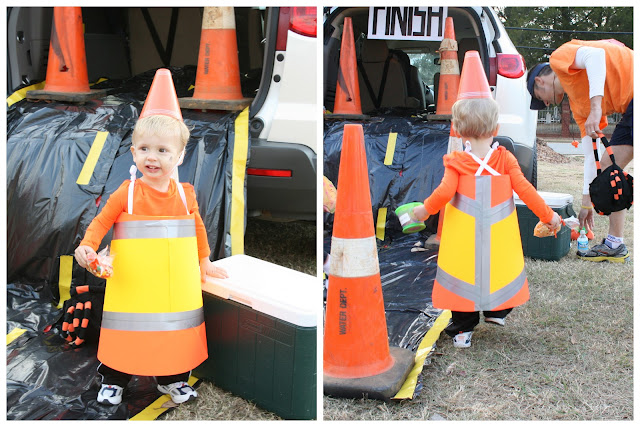 Hannah was a bumble bee because that’s what she wanted to be. 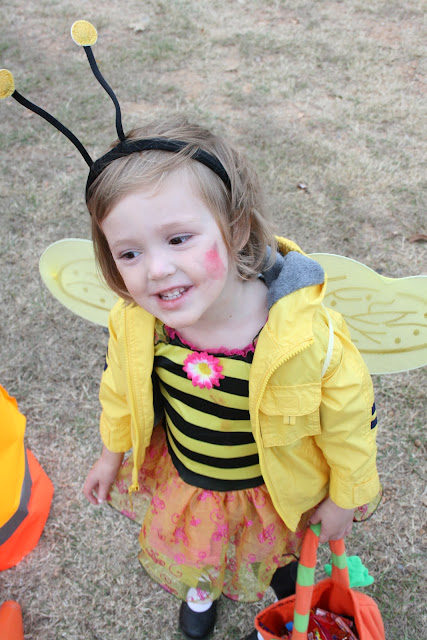 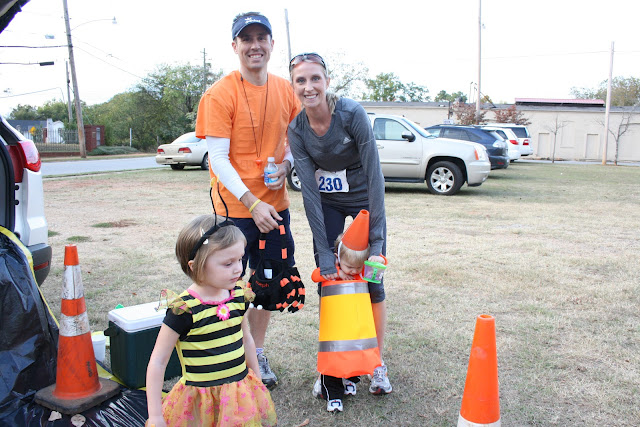 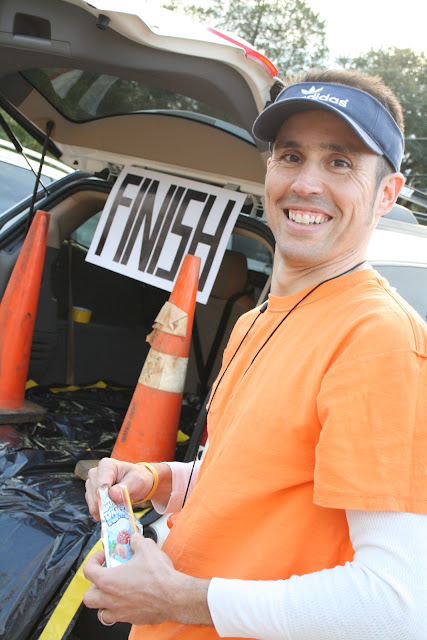 To go with our theme, we handed out Capri Sun flavored water instead of candy. 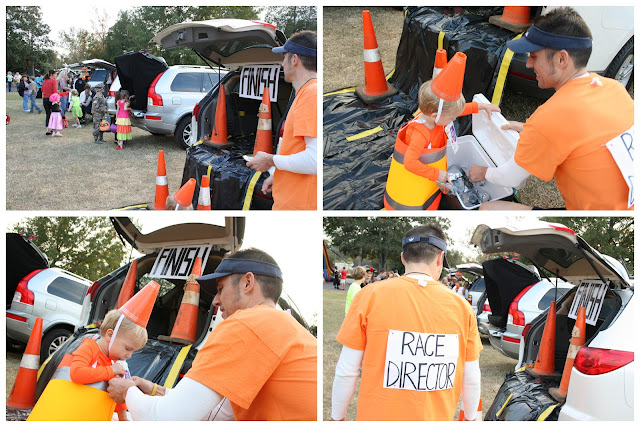 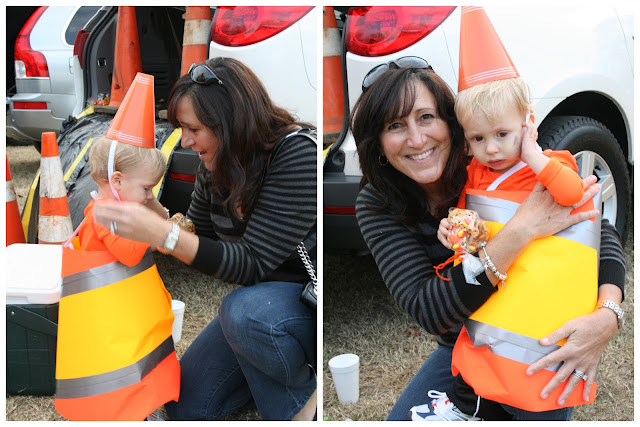 The cone took a beating, but I was happy it stayed on him for so long. The trial run at home didn’t last more than a minute.

And there you have it: our second trunk-or-treat.

When we got home, Hannah decorated spider cupcakes. 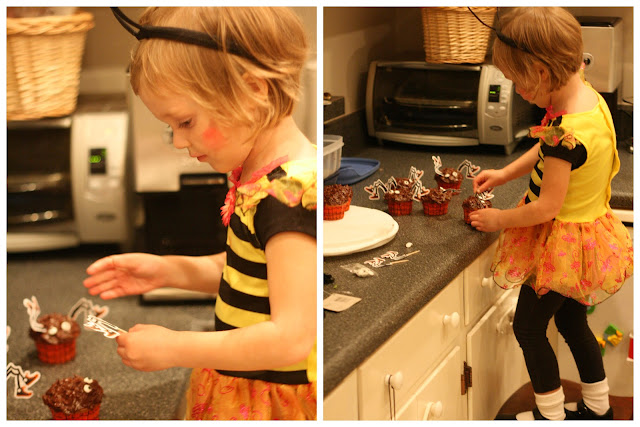 She was proud of her work, adding eyes and legs. 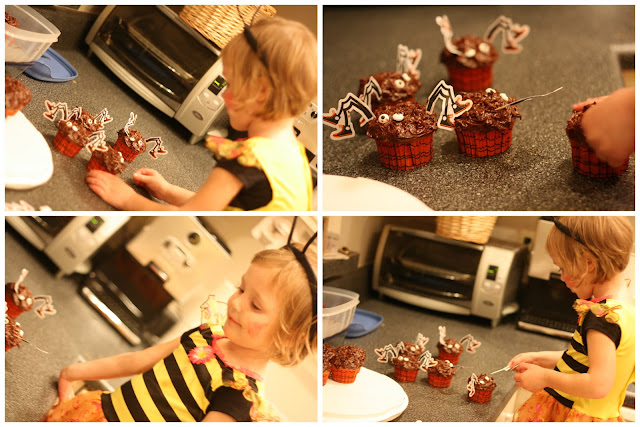 On Monday, the kids found Halloween packages in the mailbox from Meme. They were very excited (as they always are when they get mail) and Joseph did not want to put his down, to the point that he tripped up the steps coming inside and hit his mouth. He was not letting go of his surprise! 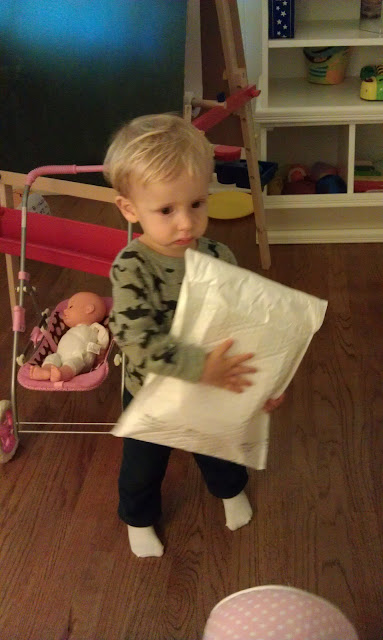 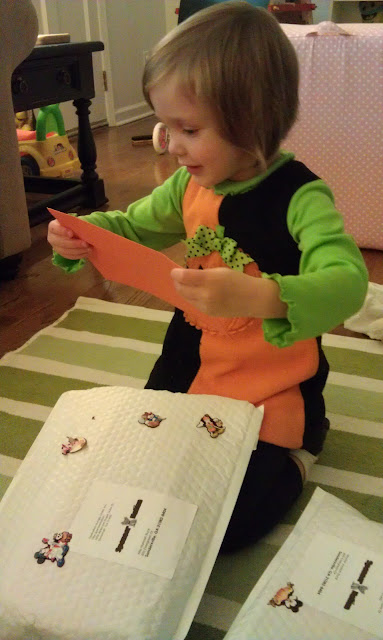 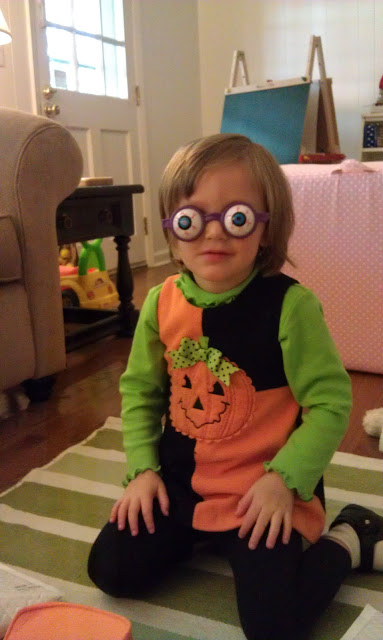 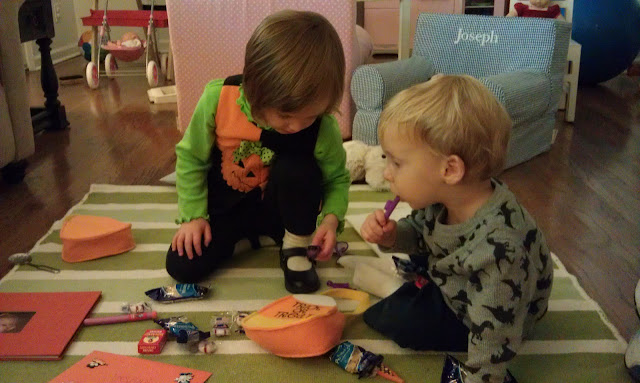 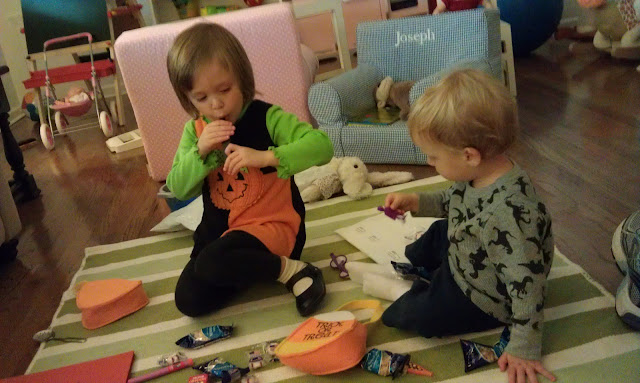 It’s been quite a Halloween celebration so far.

« georgia tech homecoming
the answer is… »