Tonight Hannah came to the dinner table with one of my hats – a skully – on her head inside out with the tags sticking straight up. She found one of Joseph’s teething rings on the table, which she slid on her arm as a bracelet. At one point while we were eating, Joe shared a thought: do people see photos of her dressed like this and think we do it and take pictures to post on Facebook, etc. Let me assure you – this is all her. And that is what makes it so fun that we want to share. She comes by this honestly. As my mom likes to tell us, the apple doesn’t fall far…

Hi blog readers, I hope you had a good weekend. We are exhausted over here. Many months ago, Joe registered for the inaugural Rock ‘n’ Roll marathon in Savannah. Later we learned the date of a Leadership Georgia gala in Augusta the night before. We really wanted to do both, knowing that it would mean little sleep, lots of miles on the car and a lot of logistics. Thursday we headed to Savannah. The kids stayed with my mom when we left Friday for Augusta. We drove back Friday night arriving at my mom’s house a little before 2am. Saturday morning we woke up at 5:30. The race started at 7:30. My brother, Ben, was running too.

A month ago Joe strained his hamstring. He has been rehabbing it with physical therapy, and a multiple-times-daily routine of heat and ice at home. He was not sure he was going to be able to run in the race. He was registered for the marathon, hoping to break his personal best, but as Saturday got closer he decided he’d be happy to race the half. Unfortunately, he had to stop at mile 7. My mom was following his (and Ben’s) times on her phone. When we saw how well he was doing at the 10k mark, we expected to see him pass by us at any minute. My heart sank when I saw him walking towards me. It was upsetting after all the work and training he put into it – not to mention having looked forward to the event for months… We cheered on Ben as he completed his first half-marathon. Saturday afternoon we drove back to Sandersville. And then came Sunday.

I learned today that an “extra hour of sleep” does not really mean just that when you have small children.

Joe and I were up late last night watching football when I came to the realization that – you know what? the kids aren’t going to sleep an extra hour in the morning…what are we doing staying up late? I immediately went to bed. Joe followed later. And as you would know it, the kids woke up before even their usual times. Joseph, who wakes up around 7:30, woke up at 6:15 today. Hannah, who wakes up around 8, woke up at 7.

We didn’t get to take advantage of that extra hour of sleep. In fact, our morning was rough. Joe’s car wouldn’t start when he went to leave for church. Joseph cried for the better part of two hours, and let’s just say Hannah had discipline issues. It was all I could do to make it to church by 11:00 – pulling into the parking lot with one minute to spare, with a nice long run in my hose.

In return, the kids granted us some sleep this afternoon. We were a napping house for two hours. Thankfully.

I forgot to grab my camera out of the car before we walked to the race and I did not bring it with us to the event Friday night, so no pictures of those. But this was the scene at my mom’s house afterward. 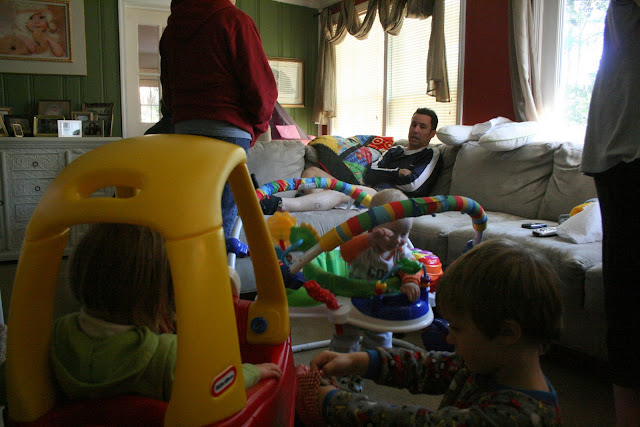 Joe is talking to our moms, while Joseph jumps and Hannah plays with Jackson. Trudie, Crystal, and Will (not pictured) look on…and Ben and Katie were around somewhere too. Little bit of a zoo, but nothing out of the ordinary.

UPDATE: My good friend sent me a picture she took at the Gala. Thank you Deana! 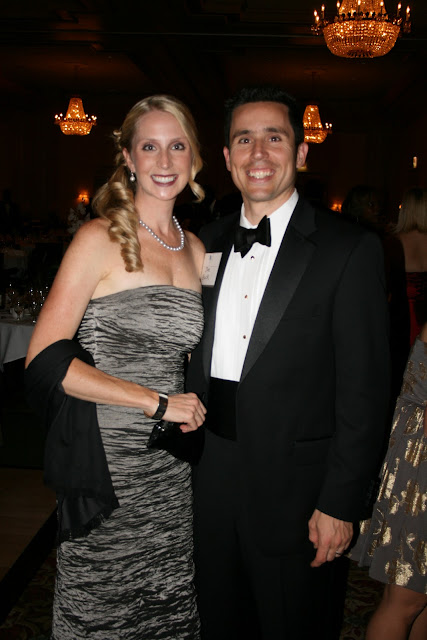 « we’ve got our hands full
ben and katie »