Though Joseph doesn’t have a nursery yet, I switched out the cushions on the glider in Hannah’s room long enough to take his one month picture. {I started this tradition with Hannah, taking her picture in her glider on the 9th of every month the whole first year and then using those pictures at her first birthday party.} 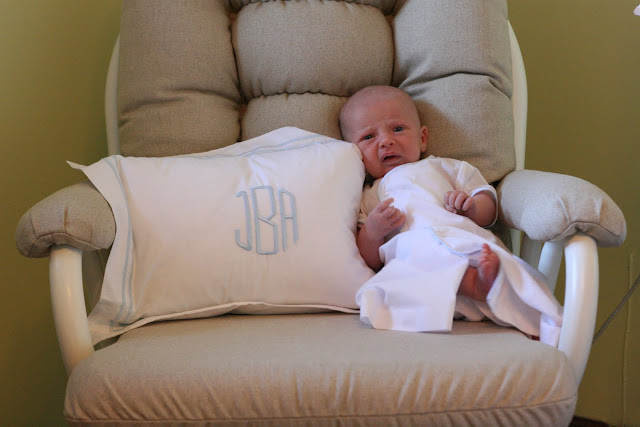 {The baby pillow is from Aunt Katie and Uncle Ben. Katie gave Hannah her’s, too. On the back is their full names and their birth dates. Love. Love. Love.}

For those that are wondering if he looks like Hannah, here is her one-month picture: 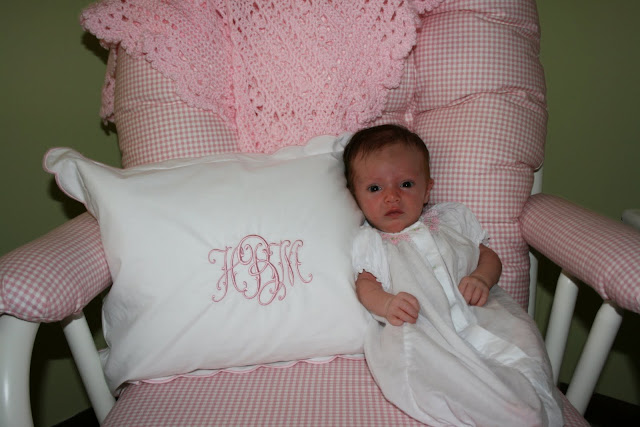 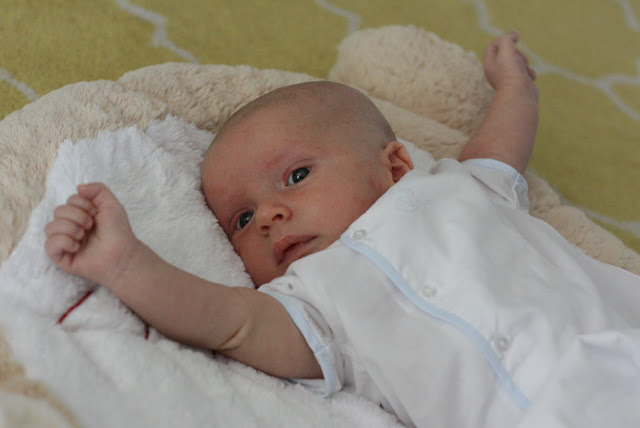 One month old. While time seems to fly by, I feel like I’ve had him so much longer than that. Some things we have learned about him:

He is my cuddle bunny. He’s happiest when I’m holding him or he’s up against me. From those first days in the hospital, it has been this way. He and I slept most of his very first night with him on my chest. Since we’ve been home he’s slept in the bassinet by my bedside. Many early mornings I have pulled him into bed next to me for that last hour or two of sleep. I can’t get enough of him.

He still has blonde fuzz and his eyes have gone from dark blue to a blue-green. I know, I know. It can take a full year for their eye color to be realized. I think he’s got my nose.

He likes to eat. And he’s a good nurser. {I couldn’t be more grateful for this. What a difference this time around.} I am feeding him 7x/day, and he’s going 4 and 5 hour stretches (sometimes 6) at night. He weighs over 11 pounds. Or did last week. He probably weighs close to 12 now. I tell you, I think he’s gotten bigger in the last 24 hours.

He did great when I introduced the bottle last week. And even better, I’m pumping lots of milk. What a relief!

He has adjusted very well to a feed-wake-sleep cycle. He has been known to fuss for quite a while before going to sleep, and often I have to wake him up to feed him.

He can and will pee during diaper changes. Everywhere.

He survived his first trip to Savannah, as well as this past weekend’s trip to Sandersville and Atlanta. {Though we learned that he can cry really hard for quite a while.}

He doesn’t like a wet or dirty diaper. And he lets us know it. {See note above.}

He seems to like baths. He hasn’t told me for sure though.

He’s not a big fan of tummy time, and sometimes tries to sleep. He has had pretty good head control from day 1 though. And really strong legs (that actually started inutero).

He doesn’t exactly love the stroller. This bothers me. {Afterall, the BOB duallie wasn’t cheap.} Hopefully it passes, and soon.

He does, however, love to be held and carried around… 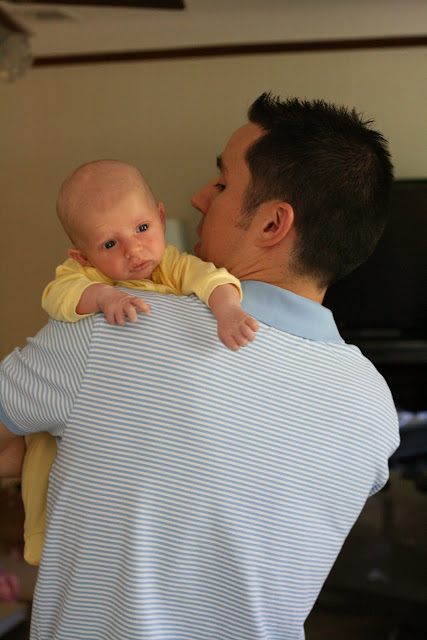 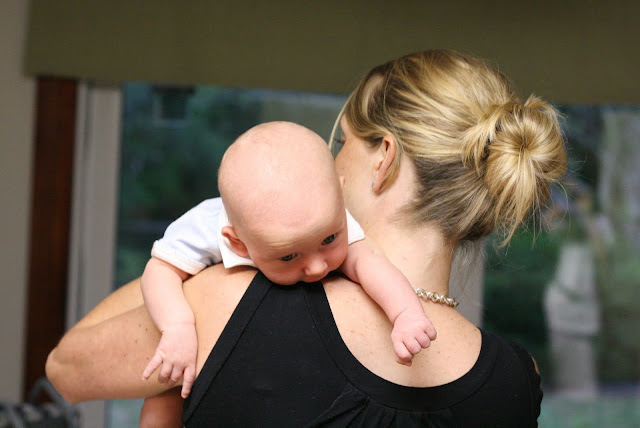 As for Hannah. She is a very (sometimes too) involved big sister. She climbs onto my lap while I’m nursing him. She tries to sit in the infant seat with him. She brings him toys in his swing. She takes away his pacifier only to go give it back to him. She lays down on the floor next to him when he’s doing his tummy and play time. She fetches diapers for me. She steals his burp cloths. She gives him about a hundred kisses a day. And, oh yeah, is suddenly obsessed with taking off his diaper. I know underneath it looks different but still… 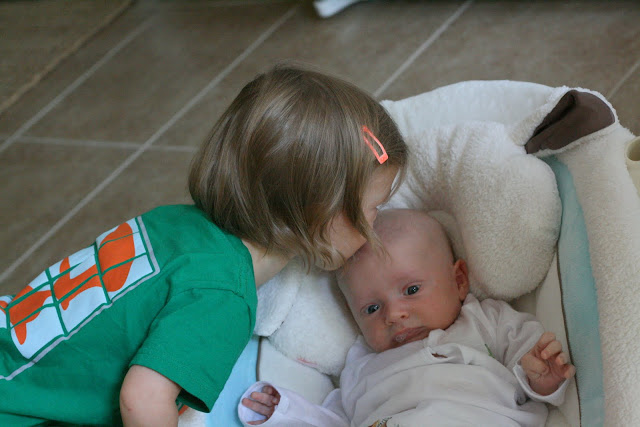 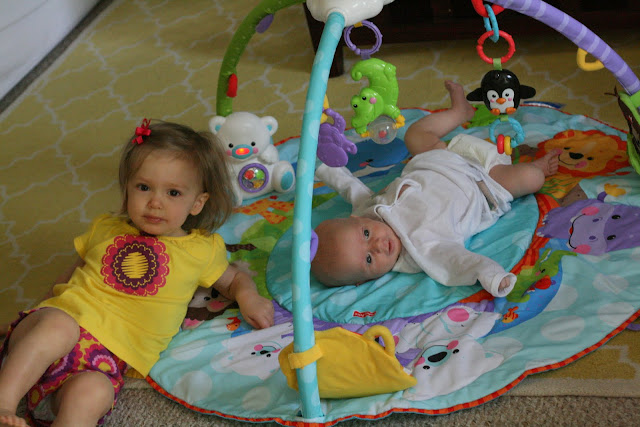 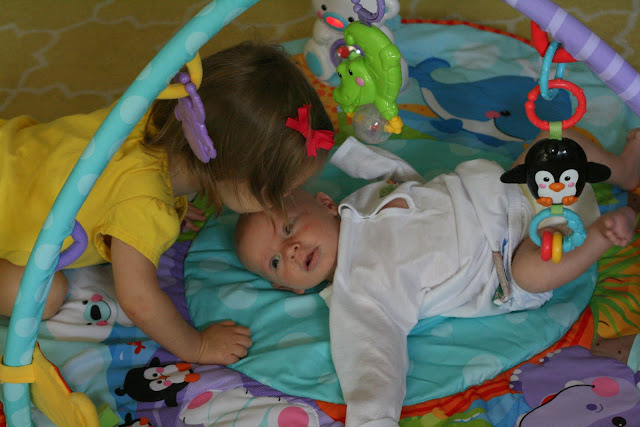 Got a couple cute videos of her I’ll post. Stay tuned…