We had some excitement early this morning. Somewhere between 4 and 5 a.m. we woke to a limb coming through our bedroom wall. I heard this extremely loud noise, saw a bright flash of light, felt the house shake and something pelting my face and arms (which I came to realize was drywall and insulation). I shot out of bed so fast, completely in a panic. My husband on the other hand was unbelievably calm, almost weirdly so. {I don’t understand how you can be so calm in a situation like that, but it was good to know that about him. He’s not the type to overreact and freak out. That’s me.} The explosive sound when it happened scared me so bad, I thought I might go into labor. Alas, I did not. I guess Joseph is happy where he is for now.

Hannah, of course, woke up too and I held her in the hallway while Joe assessed the situation. The sounds coming from the storm outside were terrifying and I didn’t know what was going on, besides the fact that I was half asleep. I did notice, oddly, that my legs were itching and I had a prickling feeling down them. A rash had broken out on the back of my legs. Now if that isn’t weird… Was it the lightning? Maybe the sheets were pulled away from me and my legs were exposed to the drywall mess too…? Was it stress? No clue. But they are fine now. We slept a couple hours in the guest room because of the mess. The storm was bad for another hour. When we got up and it was light, I saw the damage. Not too bad actually. Just loud. And scary. A large pine tree from our neighbor’s yard fell into ours, obviously hitting the house at some point causing a limb to go through the roof, attic, and into our room. The limb wasn’t very big, just came with a lot of force. 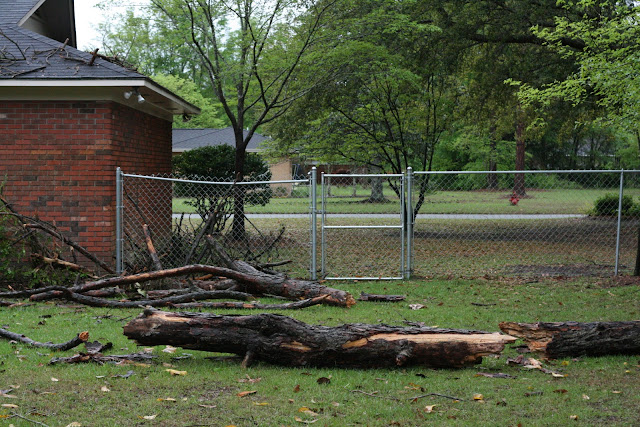 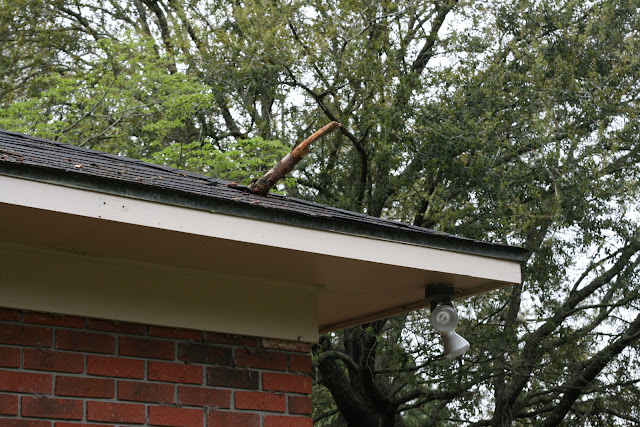 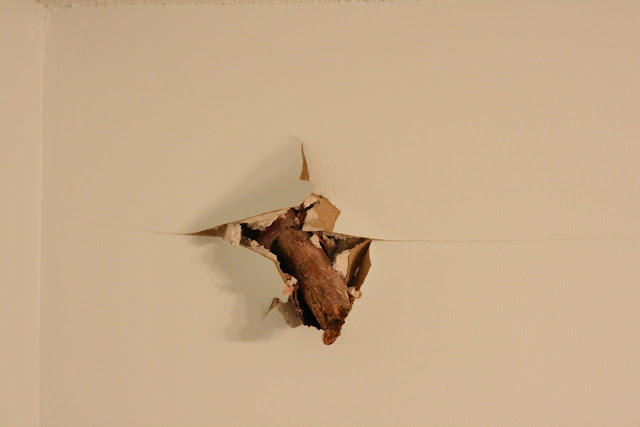 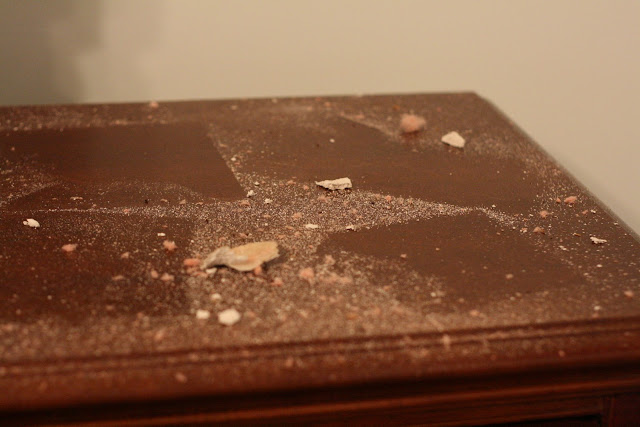 On a side note, I find it interesting that the tree that fell had been struck by lightning during a bad storm, causing our cable to go out and our nice television to lose it’s HD capabilities. {We are still mourning the loss. You could see the lightning strike down the tree. Since that storm – back in the fall, I guess – the tree has stood there dying basically, making me nervous that this exact thing would happen.} This neighbor has since moved out of the house and is now living down the street. She owns a pit bull and keeps him in the backyard of the now-empty house next door, barking incessantly in the early morning. Talk about annoying. We don’t like to complain, but it has been going on for a while and had gotten to the point where it was waking us up (and more importantly, Hannah) at all hours despite the white noise in both of our bedrooms. The sheriff is a member of our congregation and we asked him about it. He reported the situation to the PD and animal control, but we’re not sure if anything has been said. People, seriously, take some responsibility. I feel sorry for the dog.

Now, how’s that for irony?

Joe made a comment this morning about a new interior design feature and I mentioned maybe hanging something on the limb. Nothing like “bringing the outside in.” Once it was removed just a little while ago, we had an instant skylight. Now I should just fill it with one of those solar tubes… 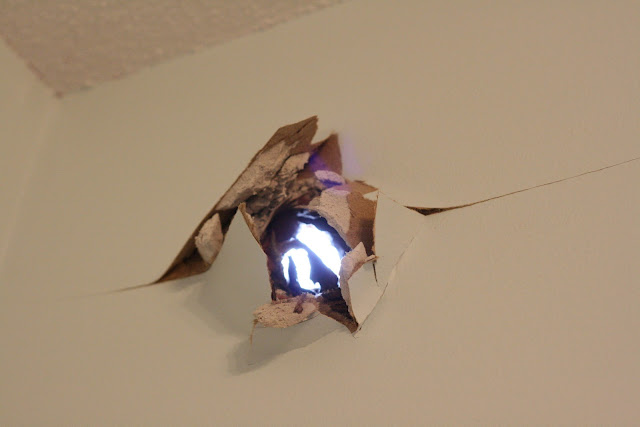 « baby gear and an update
the plight of the rosemary »