You haven’t seen a nursery update in a while because I have hardly done anything. I’ve been so laid-back in getting things ready. Kinda the whole, if I get to it, I get to it when it comes to my to-do lists. However, if anything puts fire under your rear, losing two weeks will. While we aren’t sure yet if this baby will be coming two weeks early, that’s what we are operating on right now because it definitely looks that way. So I need to get my act in gear as my mom would say.

I am pleased to announce (finally) that the bedding has been decided on and ordered. We are going with a set from Serena & Lily, a simply awesome company. While it is not custom, the quality is better than the custom stuff I was looking at. And I like it a whole lot more. There is seersucker. See, I told you. The accent color is yellow. I thought I would surely go with orange, but I am really loving the yellow. There’s not much of it, but it’s perfect. 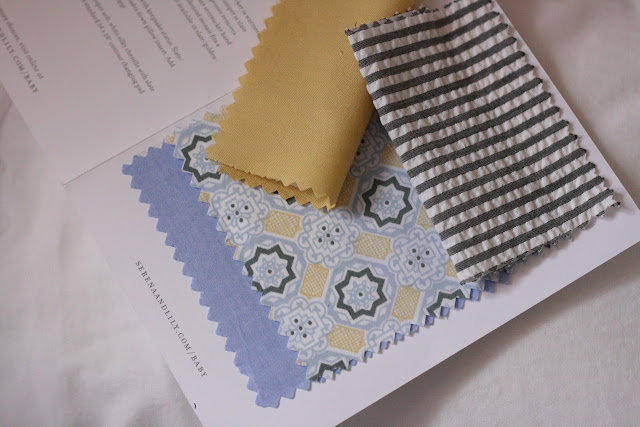 I am thinking of ordering some fabric by the yard and having drapery panels made to match the bedding. Maybe white with seersucker trim at the bottom and/or a border on the leading edge of goldenrod cotton?

What else? We have picked out a crib. It’s a traditional sleigh style, non-drop side with wainscot panels on the headboard and footboard. Since it is white, it’ll coordinate fine with the rest of the furniture. As for the chair, we will be reupholstering the glider in Hannah’s room. {We’ve got a wicker rocking chair that will take its place so we’ll have somewhere to sit in there.} I am trying to decide on a fabric. Thinking white, off-white or natural linen, pique, or matelasse.

We are most likely relocating the dresser in the guest room to the nursery. {Technically, the guest room will become the nursery.} This dresser was in my older brother’s nursery and was originally white. During Ben’s teenage days, the top of the dresser gradually became covered in stickers – all kinds. Joe and I took it from Ben’s closet when we moved to Jesup, sanded it down, and painted it with some spare paint we had, a blue and green from the walls of our old house in Savannah. It needed some lovin’. We added a piece of glass to the top to protect it and allow guests to set whatever they want on it without fear of messing it up. It doesn’t match Joseph’s bedding, so we will be painting it…again. It’s a shame that it is not deep or high enough to be a changing table too. 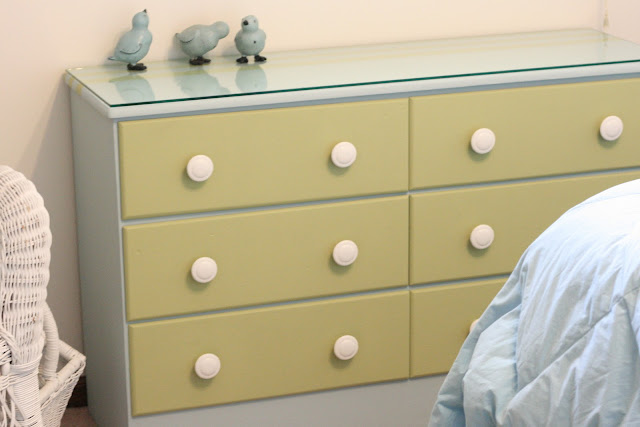 As you know, a nursery evolves over time. Hannah’s room isn’t just like it was originally. Her book shelf is full of, well books, and is now in her closet. This works nicely since her clothes are short and she’s into climbing and making big messes. It makes my life easier. I had her little PBKids armchair in its place, but now that is in the living room with us where she loves to play in it. Another note: there are now five frames on the wall holding black and white 8x10s from her photo sessions over her first year: newborn, 3m, 6m, 9m, and 1 year. That is my favorite part of her room. Now she points to the first ones and says baby. She is my little baby. I had her nursery ready a month before she came. This time around that’s probably not going to happen. It’s more like a work-in-progress and I do have that 2-3 month cushion when he’ll be in our room. Still, I’m hoping some significant strides are made in the next few weeks. I’ll keep you posted.

« sweet tooth?
do you know about these? »