In light of what has recently happened, I thought it was a fitting time for this post. While I did not personally attend Auburn University, my husband and many members of his family did. And so I consider myself a member of the Family…and ALL IN.
If you do not know the story, someone has admitted to poisoning the century-old oak trees at Auburn’s beloved Toomer’s Corner. Whether you like Auburn or not, what was done is despicable. And the guy is proud of it. Sad. No respectable person would think it was cool, funny, or deserved. You can see a great YouTube video here featuring Auburn’s creed. (As with most YouTube videos, you are better off ignoring the comments. Also despicable.)

Through email I saw this, posted on AUFAMILY.com

And The Whos Kept On Singing

This whole thing with the Toomer’s trees reminds me of the story of “The Grinch Who Stole Christmas”. Perhaps “Al” aka Harvey Almorn Updyke, from Dadeville ought to read that book. The Grinch could no more steal Christmas by stealing the Whos’ presents than “Al” can steal the Auburn Spirit by poisoning our Toomer’s trees. Do you remember what happened when the Whos woke up and their presents were gone? I am sure they were upset at first but it just made them realize even more that the Christmas spirit isn’t contained in boxes or bows-just as the Auburn Spirit isn’t contained in those trees, so they still celebrated, and kept on singing. Spirit comes from and exists within, and no one, not even “Al” the Grinch, can take that away. In fact, hurtful and hateful acts only make the Auburn Spirit stronger because we realize how invaluable and intangible it really is.
“And the toilet paper, the trunk, the branches and leaves,
I’ll bring it all down with poisoned disease.
Their mouths will hang open a minute or two,
all the fans down in Auburn will all cry BOO-HOO!
That’s a noise,” grinned “Al” from Dadeville, “That I simply must hear!”
So he paused. And the Grinch called “Al” put a hand to his ear.
And he did hear a sound rising over the Plains.
It started in low. Then it started to grow…
But the sound wasn’t sad! Why, this sound sounded merry!
It couldn’t be so! But it WAS merry! VERY!
He stared down at Auburn!
“Al” popped his eyes! Then he shook! What he saw was a shocking surprise!
Every Tiger down in Auburn, the tall and the small, were still celebrating without any trees at all!
He HADN’T stopped the Auburn Spirit from coming!
IT CAME!
Somehow or other, it came just the same!
And the Grinch called “Al” stood puzzling and puzzling:
“How could it be so?
It came without paper or shakers or trees, it came without all these things indeed.”
And he puzzled three hours, `till his puzzler was sore.
Then “Al” the Grinch thought of something he hadn’t before!
“Maybe Auburn’s spirit” he thought, “means a bit more!”
And what happened then…?
Well…in Auburn they say that “Al” the Grinch’s small heart hopefully grew three sizes that day,

after of course, they locked him away!”

In January, after the National Championship win, I went online to order Joe a t-shirt. While there, I thought I’d buy these new additions for our tree to commemorate Auburn’s perfect season. 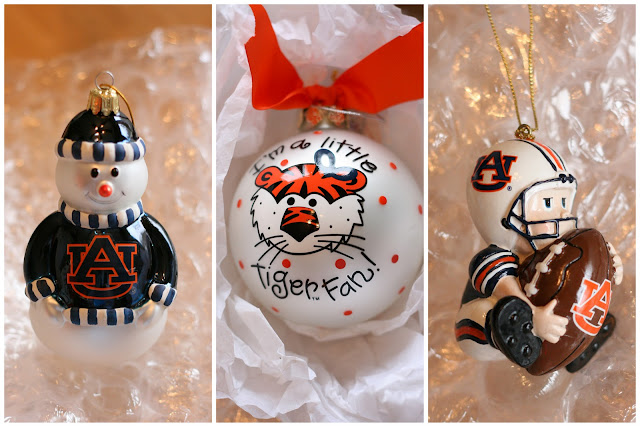 One for us, one for Hannah, and one for baby Joseph.
As a post script I’d like to add that for those of you who don’t know, my mom and my older brother went to Alabama. While the person that did this is a rabid Bama fan (though not an alum), you cannot fairly put a label on all fans of the Crimson Tide. I’d like to think that SEC fans alike would consider this a vile act. Here’s to having class.

« my funny valentine
my banana »