I didn’t intend to keep changing my header with the holidays. It just so happened. And I can’t say it’ll be a theme. But this picture just makes me smile.

We were in New York. Hannah (in the Bjorn) was taking in all the excitement at the Today Show. There were people, lights, and cameras all over the place. I called her name then snapped the picture just as she looked over. It’s like she’s saying “What Mom? I’m busy here.”

It was freezing. I had to actually touch up her face where her nose was running down to her mouth. I love her puffer coat with the faux fur trim. I’m biased of course, but this little girl has a personality that seems to come through the lens of the camera. 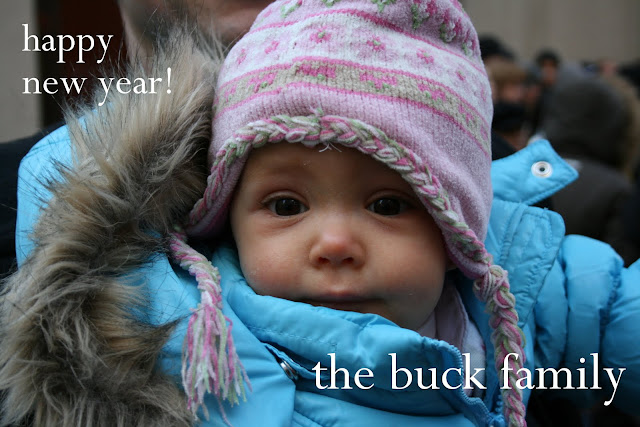 And while on that subject. I was at a wedding this past weekend and got to catch up with my good friend Julie. (Carrie, the bride, was so beautiful but I never was able to catch her picture.) Julie’s a college friend, my adpi big sister, and has a faith I admire greatly. I hate that I don’t get to see her very much. 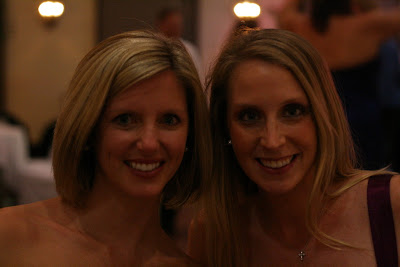 Julie has two precious little boys, MJ (2) and Ty (3 months). We shared what stages and phases we were going through. They are in the midst of the terrible 2’s. We are in the midst of throwing fits when we don’t get our way. For example, when we take something away from Hannah, we get the most dramatic, all-out fit that lasts all of a few seconds. The amazing thing is, she can eek out a couple tears too.

Sunday, the little monkey was walking around with this little Santa Claus change purse – not sure where it came from. She was chewing on the chain portion and we didn’t think that was exactly safe, so I took it away from her. Meanwhile, I was already holding the camera, so I thought I’d go ahead and capture the drama. And don’t feel sorry for her. She was over it immediately. 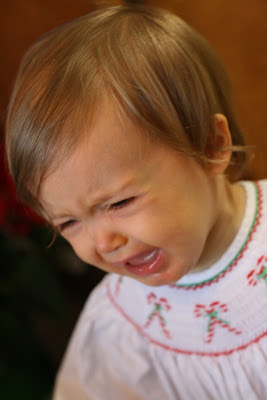 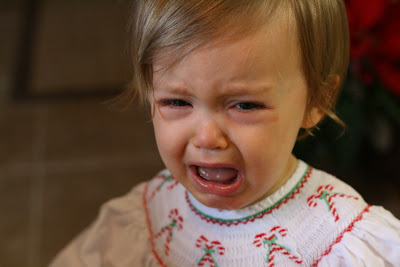 Unbelievable. Where does this drama come from? Ok. I get it. I’m just wondering if we’ll have the same kind of fits with Joseph. I heard boys are more laid back. Maybe not quite as much drama…

Well, I’m not going to get my hopes up thinking I’ll have a laid-back, low maintenance, easy child. Hopefully he’ll be able to stand up under the demands of his big sister. She’s only 16 months (next week). I think we’ve yet to see her capabilities.

Oh! and I finally wised up enough to grab the video camera before we left the house yesterday and today thinking I might catch her in what can only be described as an “oh wow” moment. You see, the house down the street had a great decoration and light display and Hannah loved it. So much in fact that she’d get excited as soon as we turned onto our street and could barely make out the lights. Then it became excitement in the daytime when we turned on the street – no lights to be seen. Now the lights and decorations are gone. It’s still the “oh wow” house…yeah.

The first video is really just a bunch of babble I don’t understand. I know at one point she’s saying “baby” referring to the baby Jesus. But there’s another one – a three-syllable word that begins with B. No clue. I love the recognition on her face when she sees the house. Then, since it’s daytime, I think she’s wondering why it doesn’t look the same. No wow factor.

This is when I captured the oh wows.

« his name is joseph
twelfth night »