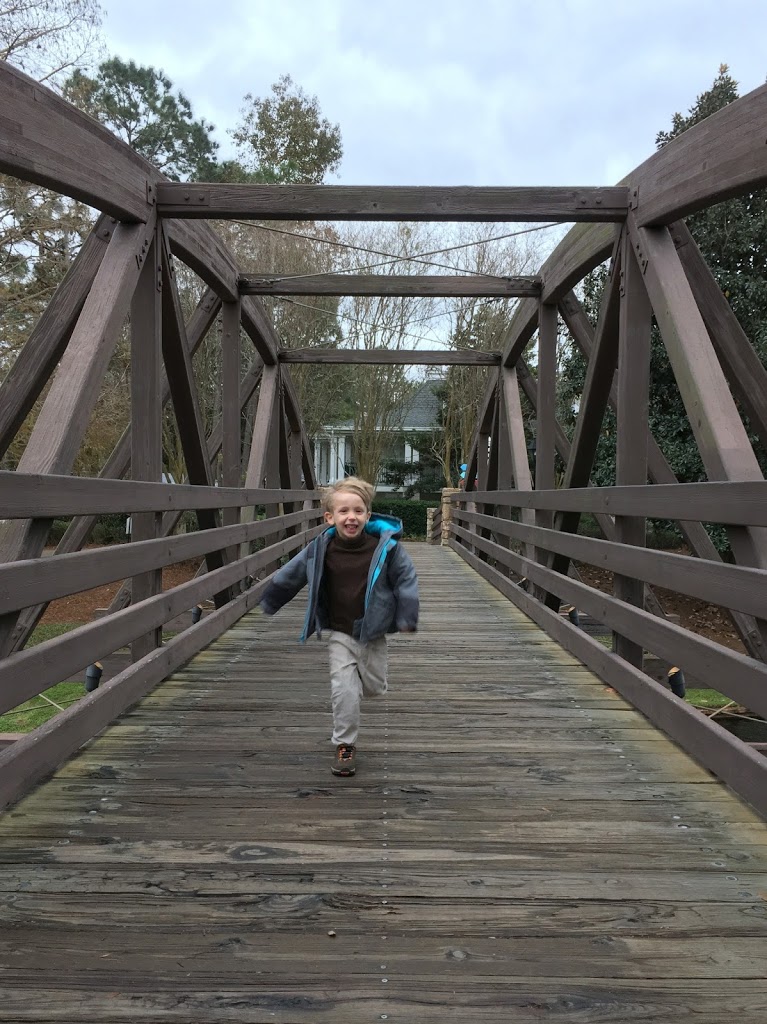 On Saturday morning, we woke up and walked/ran over to the resort’s main building for breakfast. It was the windiest (making it feel the coldest) it had been the entire time and we were thankful we were not heading to a park! This was also the day it snowed back home in Sandersville. We used the rest of our quick-service and snack credits from our dining plan and shared a breakfast platter and pastries.

Soon after, we were packed up and on our way home. I kind of thought the kids would crash in the car but, other than a short nap for Joseph, they were awake the whole 7-hour drive. Too excited thinking about all the fun! 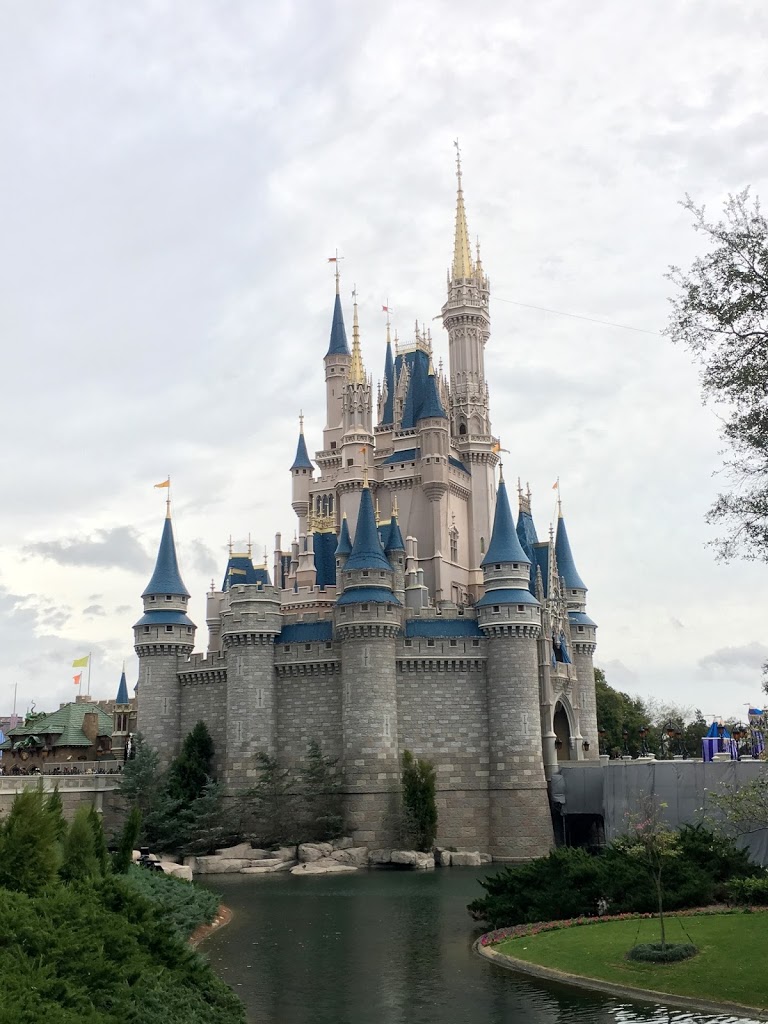 In review, I thought I would include some notes on our first trip to Disney…

One thing we found very helpful was the Disney World My Disney Experience app. We would pull it up all the time. It was our map, how we checked wait times, how we decided where to grab something to eat and know where characters were at any given time. It’s accurate and easy to navigate. On the homepage, it has my plans, which would include anything we had FastPass or dining reservations for, along with any additional notes I added. 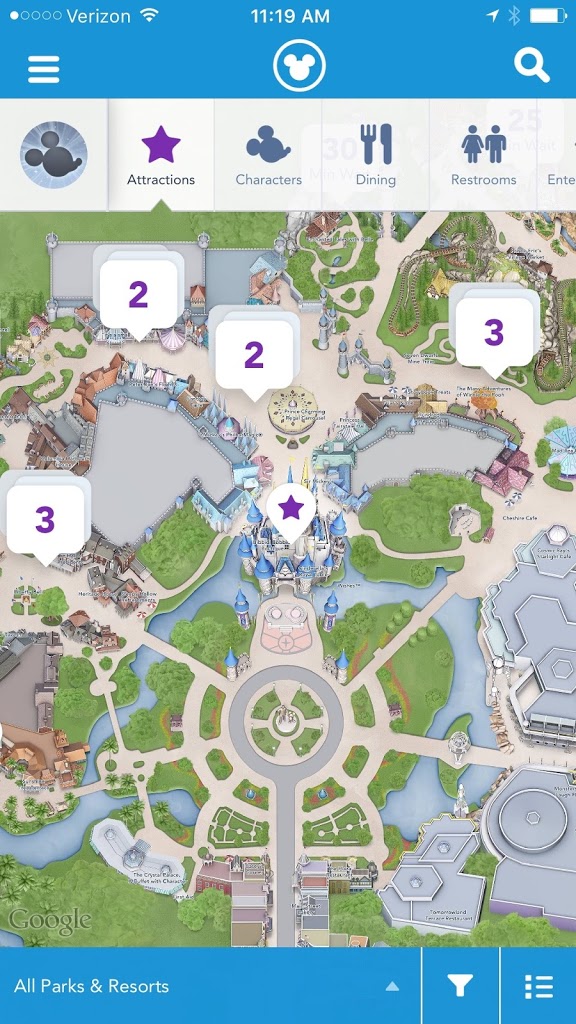 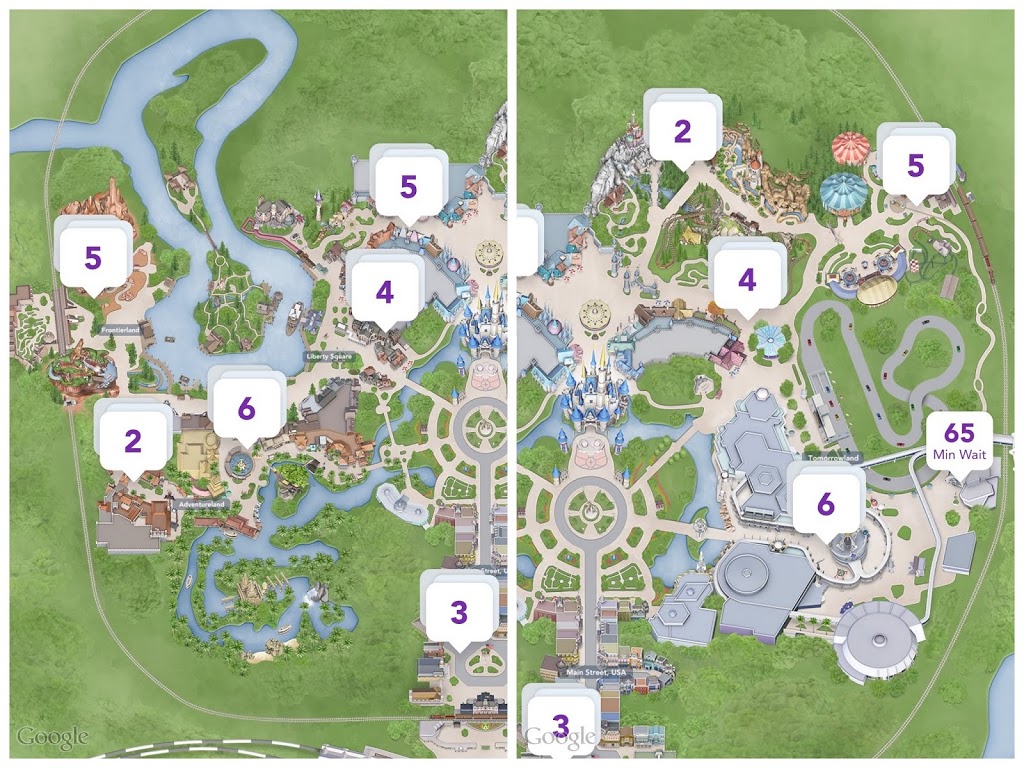 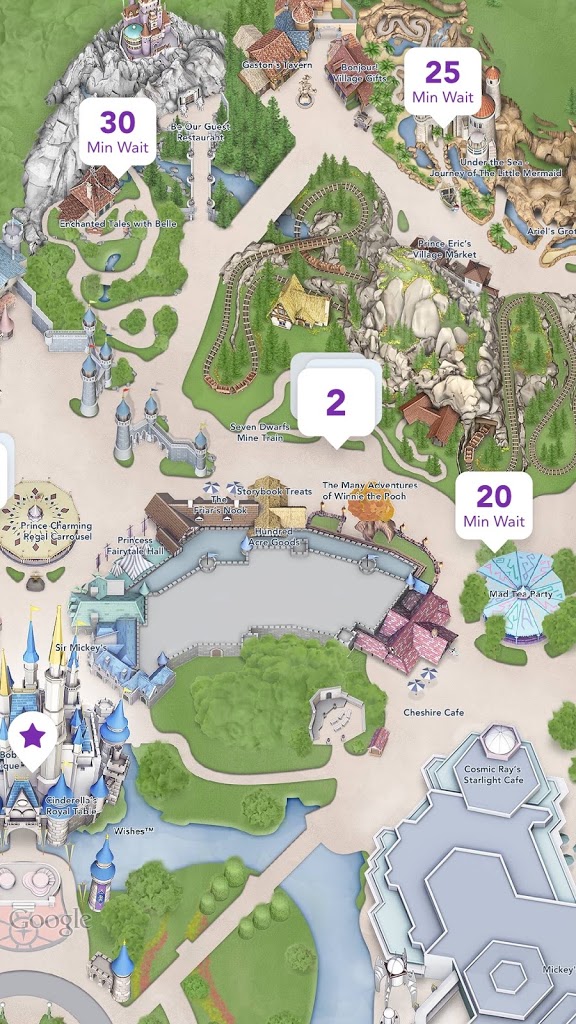 The food throughout Disney was very good and going with the dining plan was the right decision for us. We had heard that using the credits can get confusing and the plan can be a waste of money, but we didn’t have that problem. We like to eat and we didn’t want to worry about paying everywhere we went for everything. If you do it right, the meal plan can save you a lot of money.

I left the dining plan credit figuring-out to Joe. As he’s our chief meal planner at home, I thought this was perfect! He kept a note on his phone and would edit it accordingly. This was so like him – made me laugh as he’d plan how to best use our credits.

We picked an off-peak time of year to go, leaving shorter lines and far less crowds. It was perfect. And it certainly wasn’t hot. To give you an idea of the crowd size, this what it looked like mid-day at the Magic Kingdom: 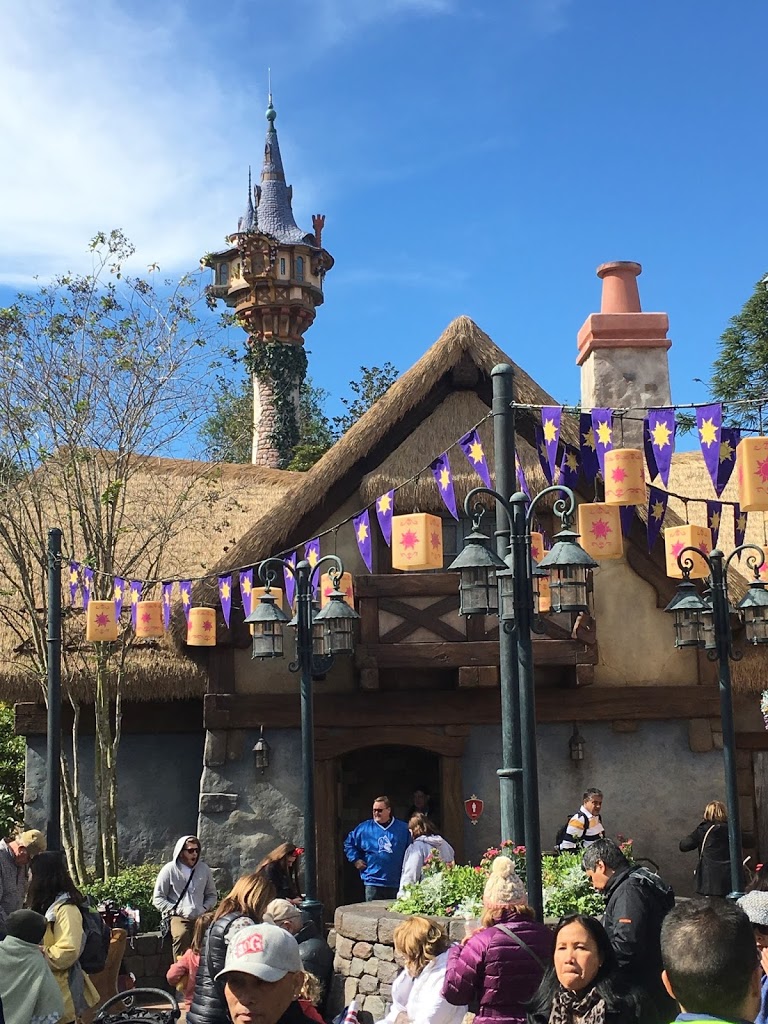 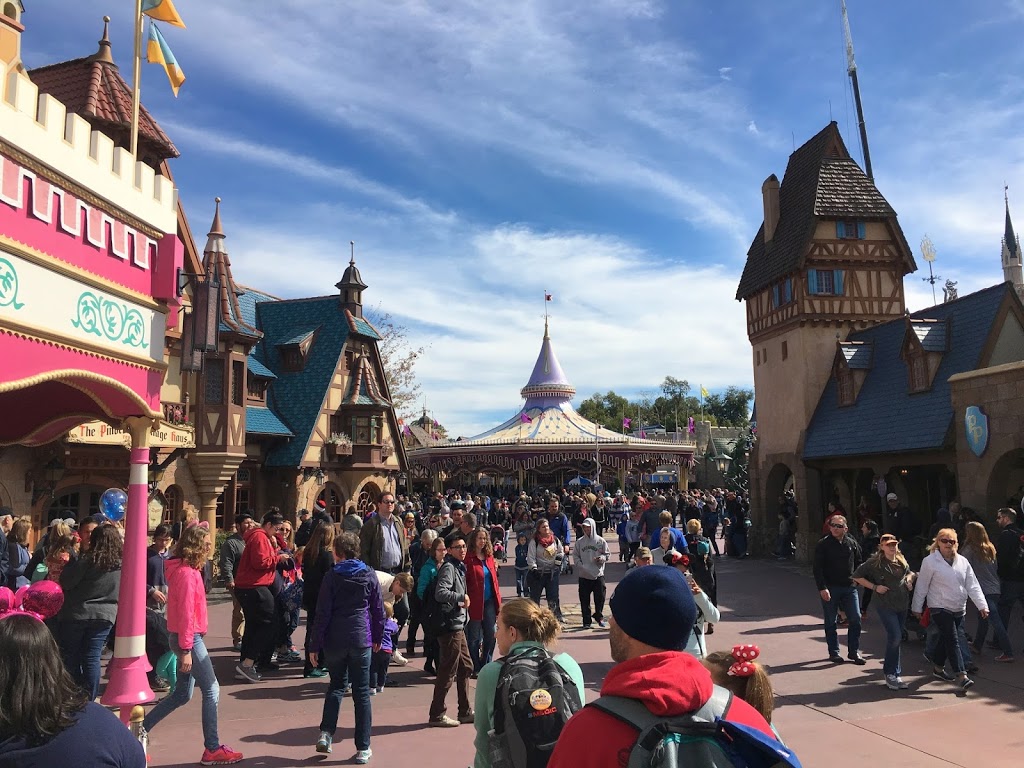 The weather was chilly – chillier than I would have liked for Florida, but we were prepared with jackets, hats and scarves. They all came off by lunch and the sun was mostly out. Only on Friday, our last park day, did we have bad weather. It rained on and off until mid-afternoon but it wasn’t terrible; didn’t slow us down at all. Again, I was prepared with jackets and rain boots! Most days, we ended up in just one layer.

Each night Joe and I packed one of my Baggu (reusable grocery) bags to take with us to the park. It held snacks, the pillowcases and fabric markers for autographs, Mouse ears, and a few other things. {On a whim I decided to bring a little coloring book and markers and that was really useful at restaurants or in line.} By the end of the day, we stuffed hats or jackets and souvenirs in there as well. We kept it in the stroller (or on the visor when both kids were riding) and it was bright turquoise making our stroller easy to identify among the other rentals when left outside attractions. We also had a small soft-sided cooler holding a few bottles of water and juice boxes. Other than that, I carried a purse.

To give the character something to hold and bear down on when signing the pillowcases, we brought Hannah’s little dry erase board which she uses to practice her letters. I packed her dry-erase markers in our daily bag giving her something to do when little brother was coloring. 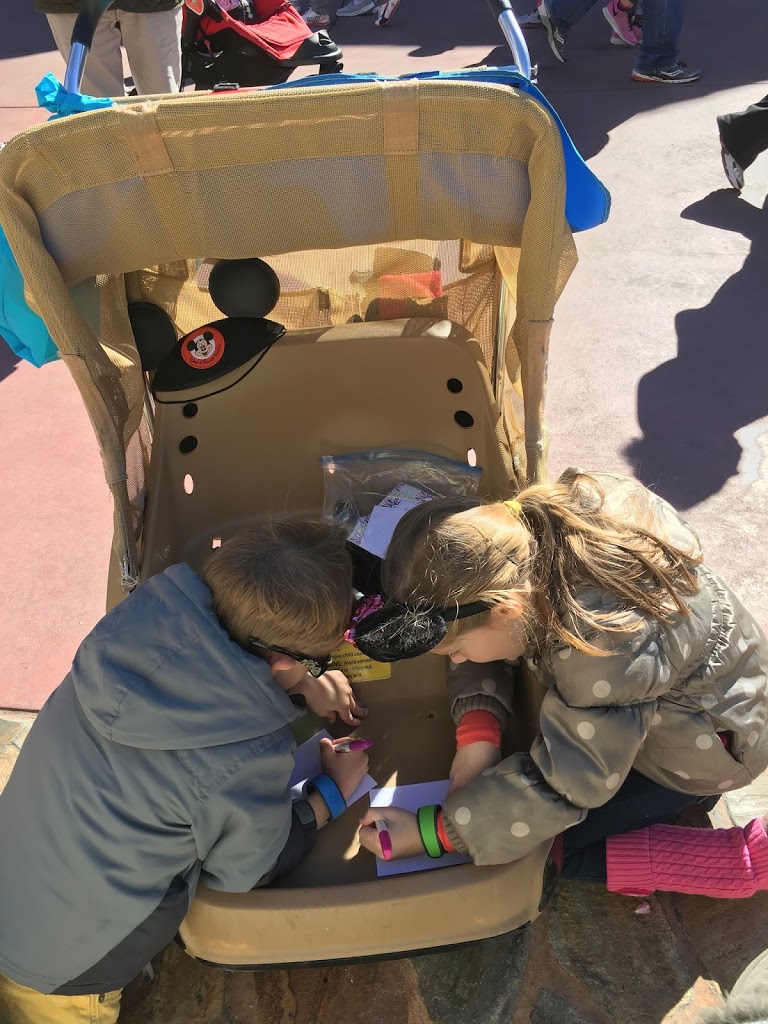 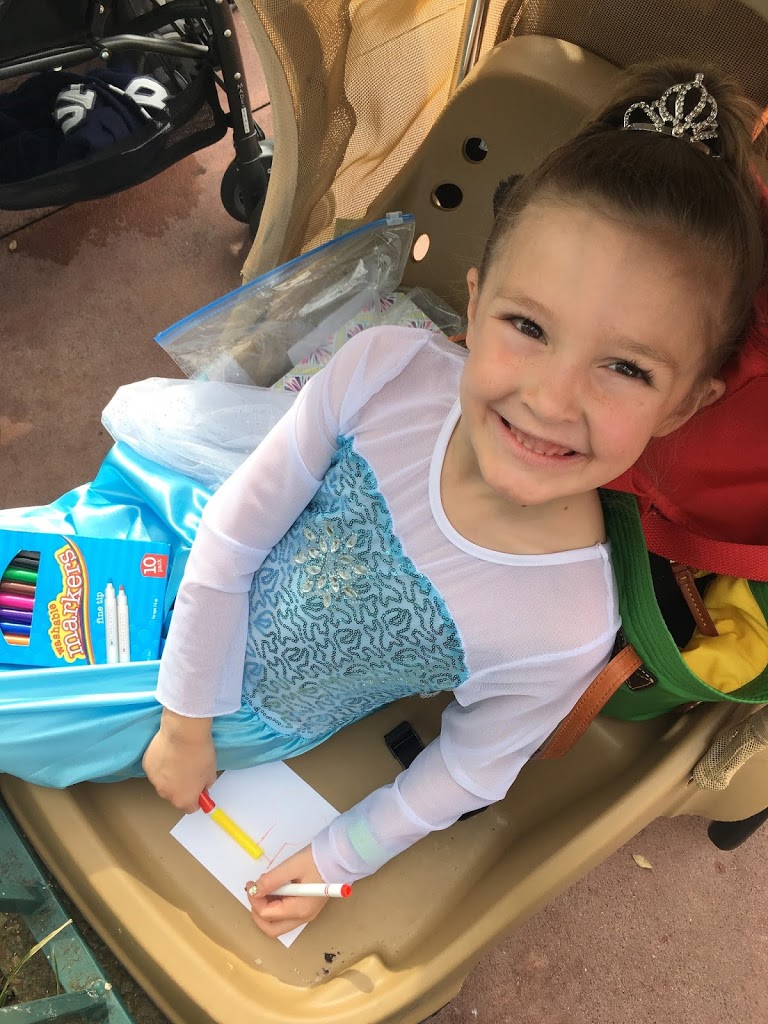 About the pillowcases… I wanted something for the kids to get autographs, but didn’t necessarily want to go the book route. My mom got them both for the Disney Cruise. The autograph books were by Amanda at Dixie Delights. I added pictures of the children with each character in there, as well as wrote a diary laying out each day’s activities. They turned out really cute and sit on the shelves in the kids’ bedrooms. But we also did pillowcases, leaving them at guest services once we got onboard the ship, where they were signed by the characters (princesses for Hannah, Mickey and the gang for Joseph).

Truthfully, the kids like their pillowcases the most and love sleeping on them. I’m still glad we did the books on the cruise but for this trip, I went with just pillowcases. We weren’t planning on trying to get a bunch of autographs this trip either. We met most of the characters the kids wanted to on the cruise. I reserved a Fast Pass for the Anna/Elsa meet-and-greet and planned to see Pocahontas at Animal Kingdom. Of course, we had to make sure to see Mickey and the gang! Other than that, all other character encounters were a bonus.

We ended up meeting a bunch of characters and were so excited how the pillowcases turned out. 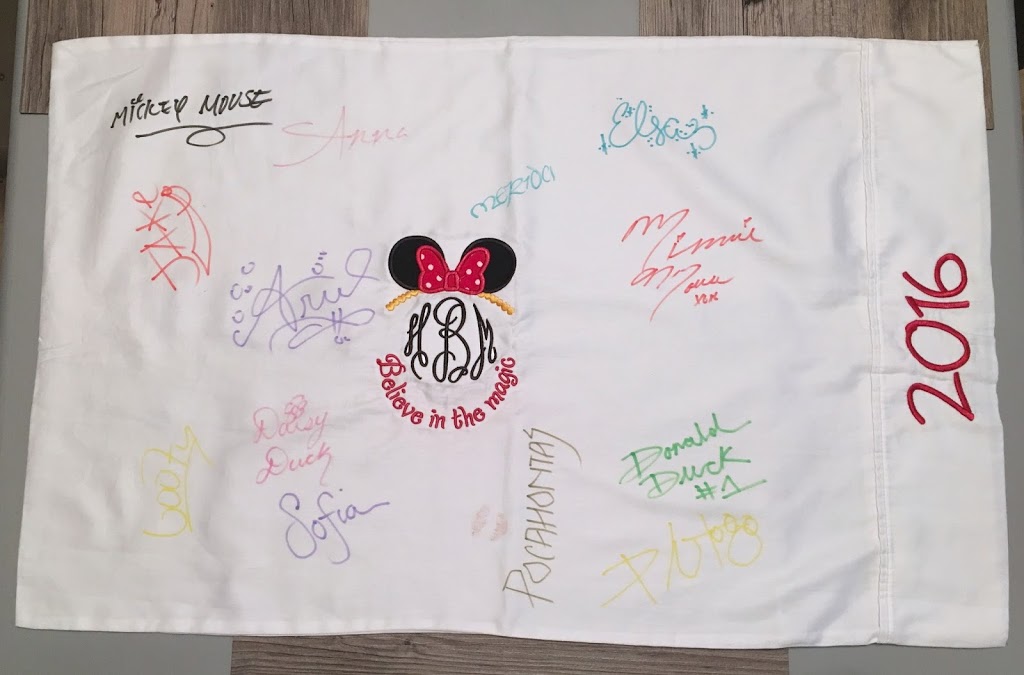 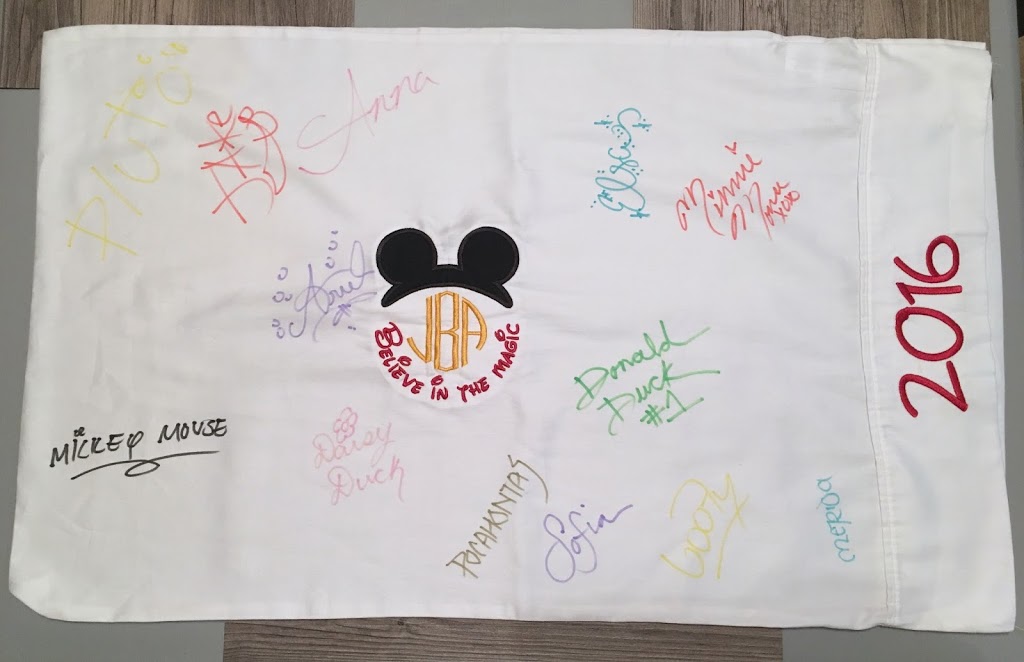 I did not bring my nice camera and so glad. We decided to go with the Memory Maker after hearing mixed advice. Best decision. We got professional pictures in front of the castle and at other iconic places, all of the pictures/videos from the rides and any character encounters. This was great for me because it meant I didn’t have to worry about being behind the camera, worried about trying to get a good shot, and could instead be in the moment.

I also had my phone and took plenty of everything else. As you could tell from earlier posts, I came back with tons of pictures of our first Disney experience! 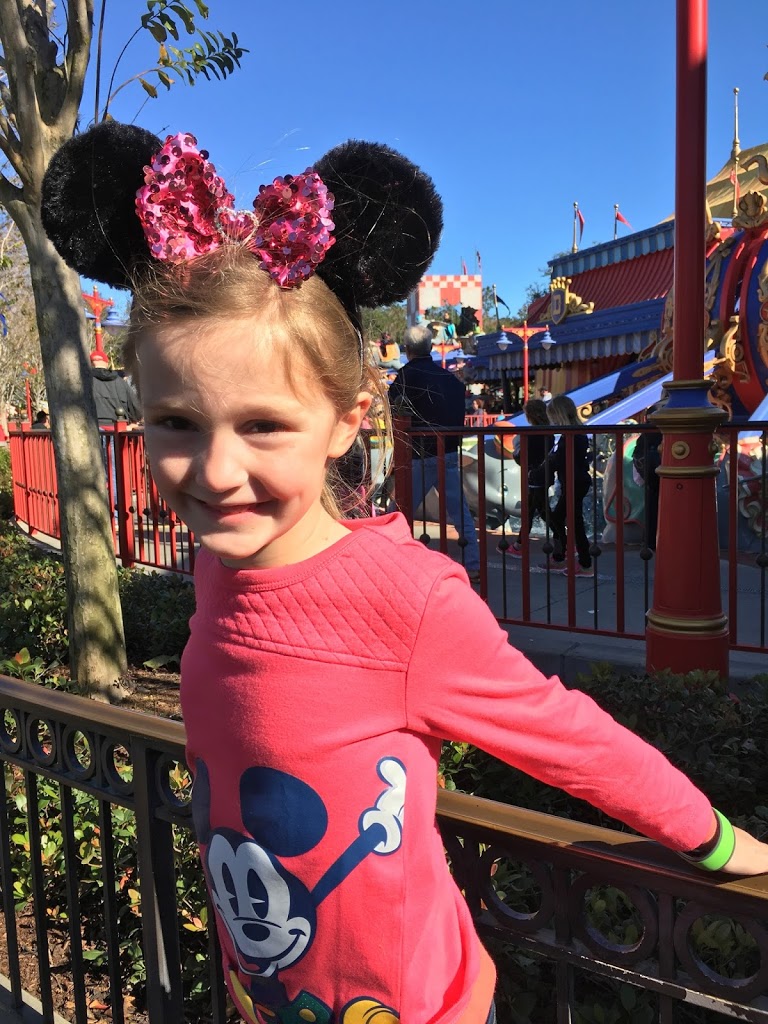 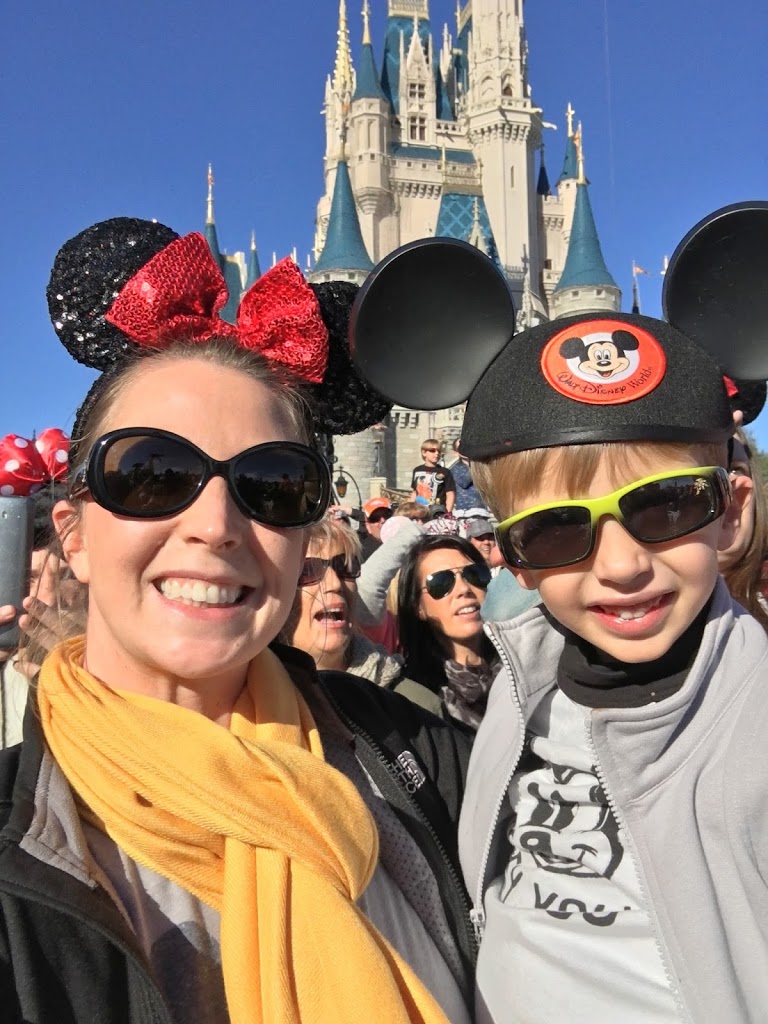 The app also had all PhotoPass pictures that had been taken of us. And it was super fast being updated. We’d have a picture taken and a few minutes later it’d be there: 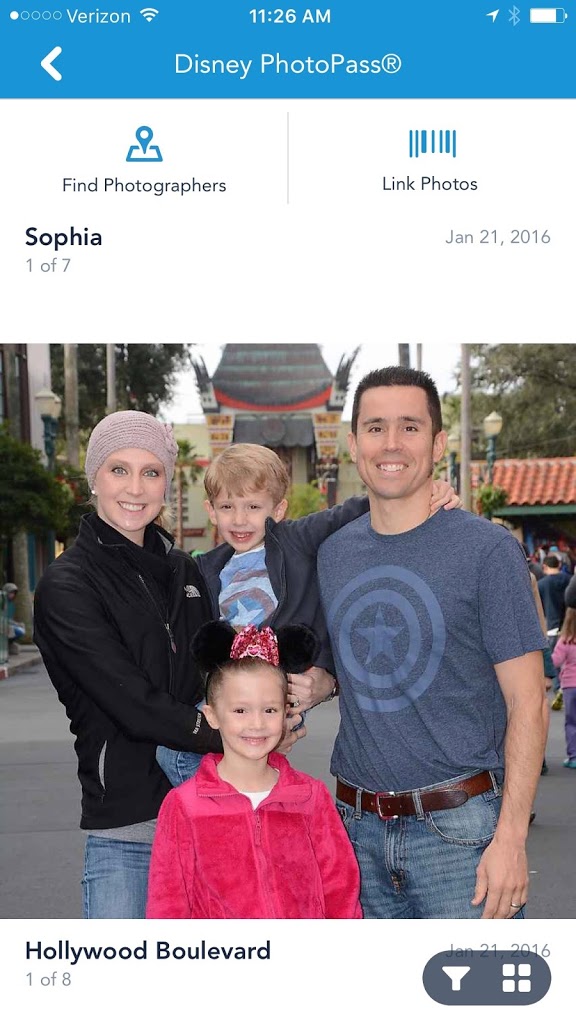 I planned and planned this trip. I asked for lots of advice and read stuff online and in The Unofficial Guide to Disney. I think some people thought I was a little silly with all the planning and booking things in advance. But, you know what? It paid off. 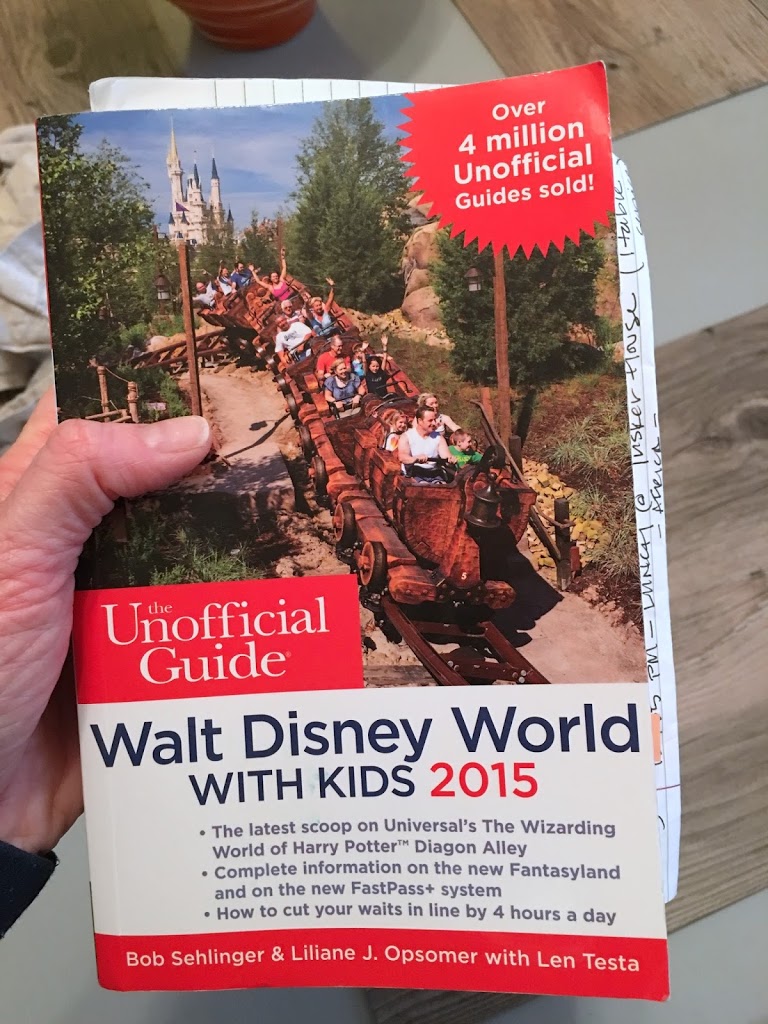 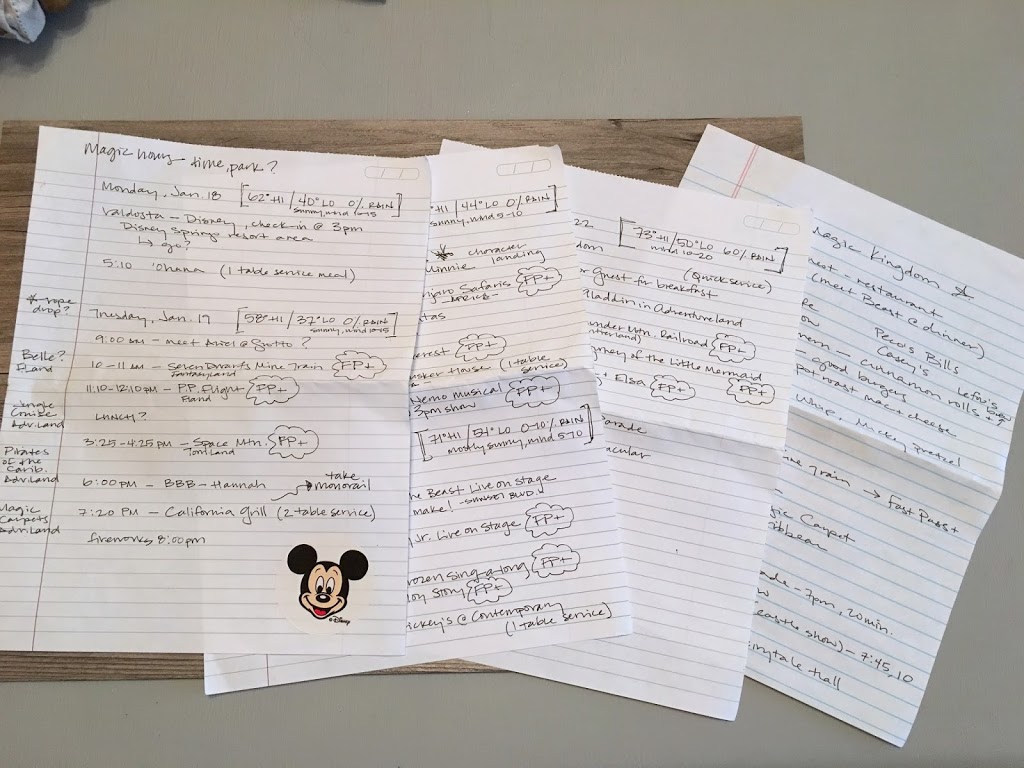 We did everything we wanted to do and more. We ate at all the places we wanted to eat. We were prepared and organized. But we also were flexible and allowed ourselves to be spontaneous. I think that’s the big difference. I wasn’t the crazy lady with the moment-by-moment itinerary and incapable of diverting from it; we did, in fact, many times do just that. And we weren’t rushed. 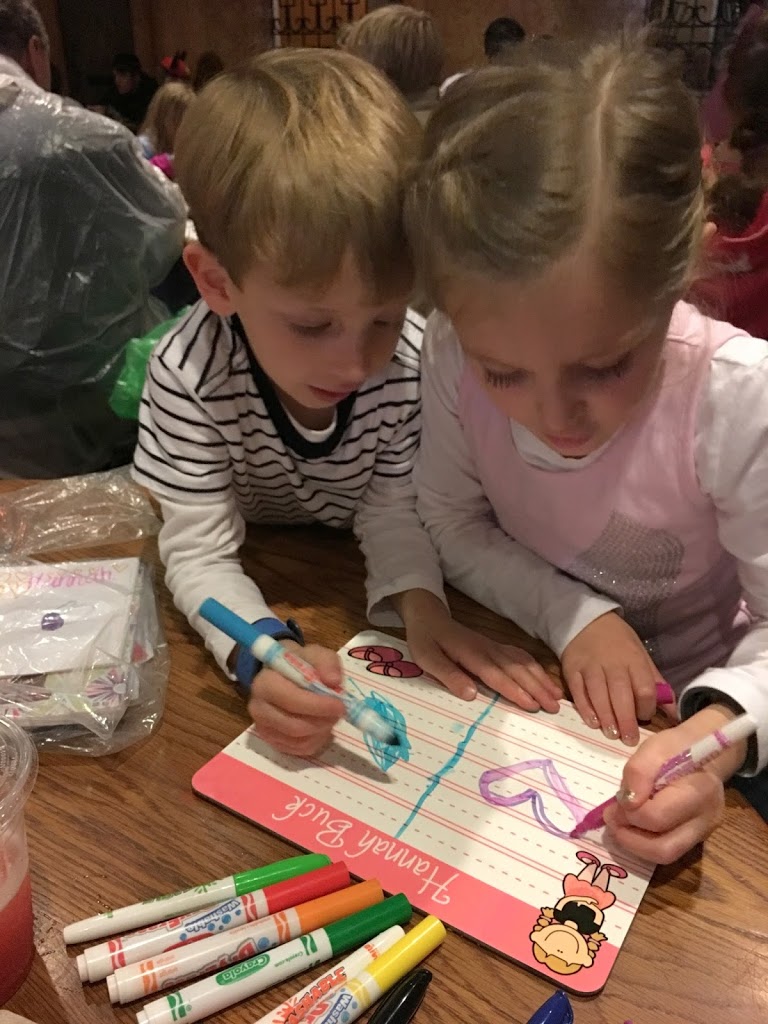 Hannah and Joseph had an amazing time. We heard very few complaints. They even squabbled a lot less than usual. I know how stressful trips to Disney can be and have heard people say they have no interest in going or those who have gone say they don’t want to go back. Thankfully, that was not us. We all got along fine and, other than a couple times trying to reach a reservation, we really didn’t stress at all.

Exhaustion, on the other hand, did not escape us. How can you not be exhausted after that?! After four packed-full park days, we arrived home that Saturday night definitely needing to rest and catch up on sleep. While everyone felt fine during the week, the last night was rough and Joseph and I both were not feeling well, ending up on antibiotics for colds turned worse. We were just glad it was after the trip!

On the car ride back home, Joe and I talked about our time in Disney and what we would have done differently. Honestly, we couldn’t think of anything, at least anything significant. It was just right. We had so much fun and have a ton of memories from our 6 days spent in the land of magic.

And I can’t believe I’m saying this so soon, but I’m looking forward to going again in the hopefully not too-distant future! 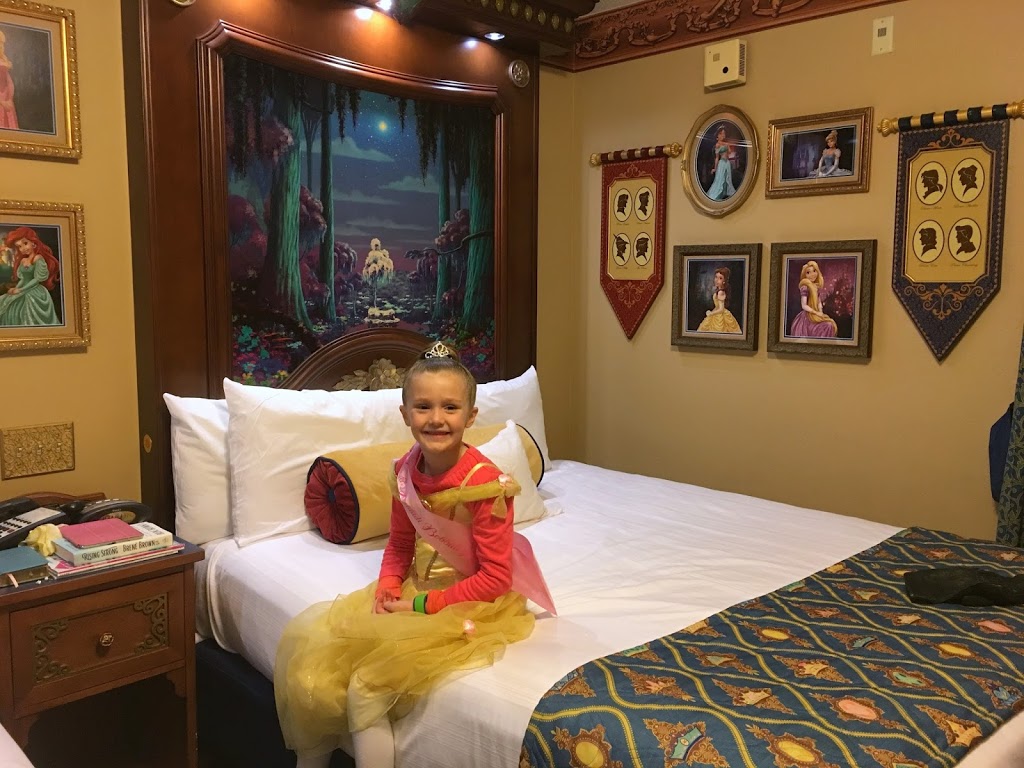 With that, I close the book so to speak on this Disney post series. I did it primarily for our own family record-keeping but if it helps anyone else out there that’s a bonus. Now I need to make a photo book while the memories and details are still fresh in my mind.
See ya real soon!