We moved into our new home last June. We didn’t find out we were definitely moving until the end of March. Our new city was about 3 1/2 hours away. Needless to say, finding and buying a home was not easy. Add to that, a city we had never been to and knew nothing about, nor did we know anyone, and it was a little stressful.

I’ve always been the type that gets excited over moving. I didn’t live in the same house until college like many of my friends did. I lived in 6 places in Savannah before I went off to school, and then another 6 places during my time in Atlanta. Since getting married we’ve now lived 4 places, all different cities. So…yeah, I guess it’s a big part of my past, this whole moving thing.

Our first house together, a little bungalow… 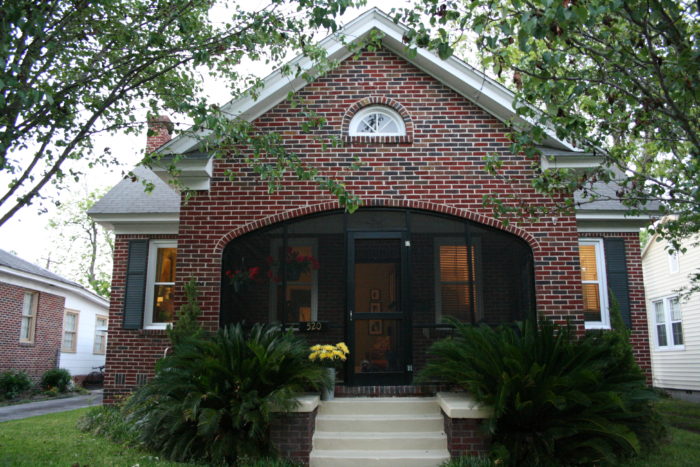 We loved that house, despite those darn sago palms that would poke me.

While I am definitely a creature of habit, change really doesn’t scare me that much. I’m not always accepting of it at first, but I don’t mind the challenges and generally stay optimistic, looking forward to new opportunities. I haven’t always gotten excited about moving to a whole new place (by that I mean city). Leaving everything you know and saying goodbye to good friends is not fun.

But if you can separate just the new house part, that part is kinda fun.

I like the idea of starting from scratch in a new house, finding new places to put things and different ways of arranging furniture. Alas, that is the interior designer in me. I definitely get all into the whole cleaning out and purging business every time we move. But the sorting and packing boxes…and then the unpacking and sorting? That’s not what I’m referring to. Let’s keep it positive here and only think about the good side to moving, shall we?

House hunting excites me. I have never done it on my own. All I’ve lived in, up until this point, is my family homes and then apartments while in college. And for Joe and me, this was our first experience house hunting together. When we got married, I moved into a house he already owned. From there, we have lived in parsonages. All that to say, installing Zillow on my phone and checking up on the Valdosta real estate was lots of fun for me.

I wanted natural light, wood floors, and high ceilings. We needed at least three bedrooms and two bathrooms. A good backyard and a safe neighborhood where the kids could ride their bikes was important. School districts also played a huge part in the decision-making process.

Joe and I really wanted an older house. Something we could fix up. His house in Savannah, where we first lived, was built in 1930. I was thinking something around that old. We love the character and architectural details found in old homes. It was ok for us not to live in something shiny and new. Quirks like doors that opened on their own and creaky floors were just fine!

My heart did a pitter-patter when Joe sent me a link to this house: 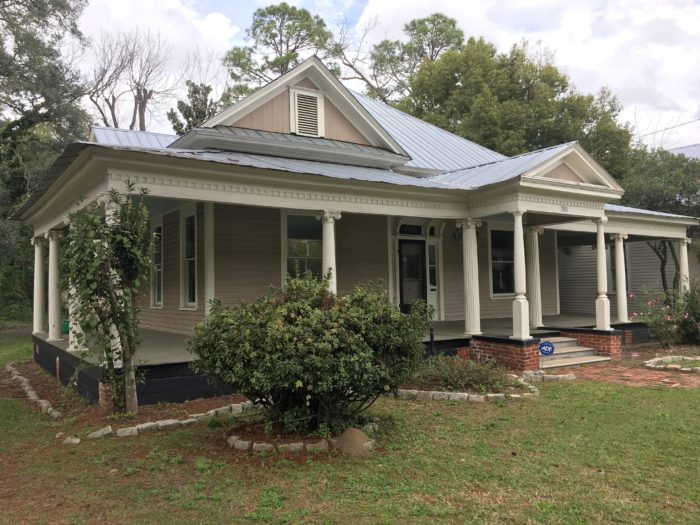 I was so smitten, in fact, that when we drove up to in person I didn’t concern myself with the street on which it sat. I hurried up to the front porch and looked through the windows. Then walked around the outside, imagining all the changes we would do if it was ours. 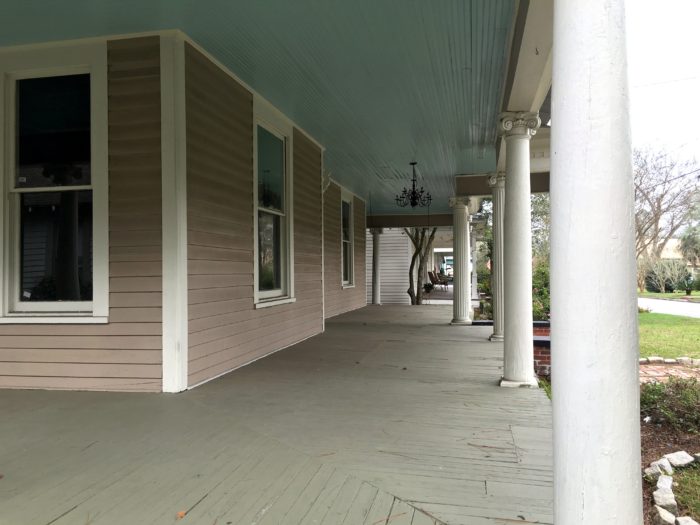 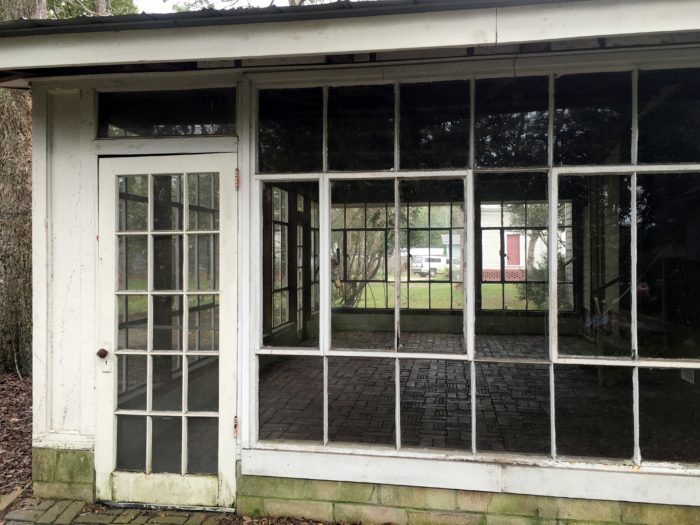 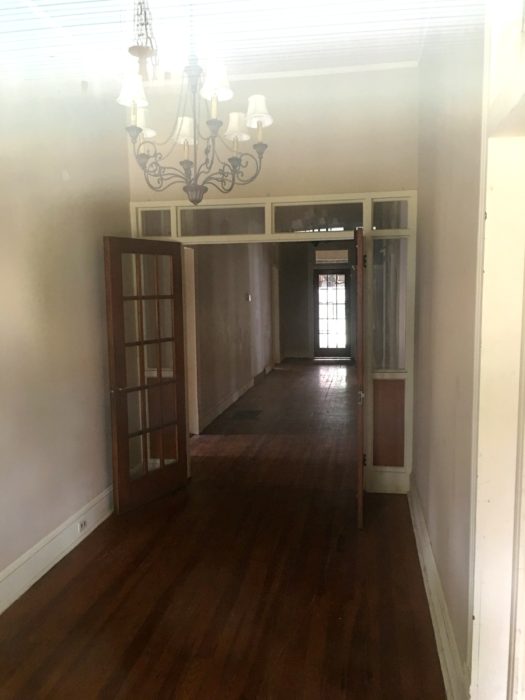 I am not joking when I say, I saw us there. I could see us on that big wraparound porch. I could see my children running through that front hall. I could see Joe cooking in that kitchen. I could see me working and us having small group gatherings in that sun-drenched back room. It was visceral.

But it was just the house I was obsessed with, and you know as well as I do that a decision has to be made based on a variety of factors. As we drove around the area, it became abundantly clear that we would not be living there. While the house would be dream for us to have and fix up, the location left much to be desired. The “good neighborhood” we wanted was not there.

The house was just outside of the historic district in what was once, I am sure, an ideal place to live. Many of the houses were very old with tons of character. It seemed to us that this area of town had gone through a period of restoration, perhaps a decade ago, and then, with only a small fraction of the homes restored, the preservation came to a halt.

The school district was also not the best either. It just wasn’t right for us…

I have to say, I was a little sad driving away.

On a second trip, we checked out another old house that we had seen online. It had several of the things we were looking for, just as the first one did.

We actually went in this one, but as we drove up to it on our first tour with the realtor, disappointment settled in. The house sat one street over from a main/busy street and was surrounded by other houses that had all been converted into commercial properties. It was not a “neighborhood” by any means and not ideal for raising children.

Still, I loved the look of it. And the potential. 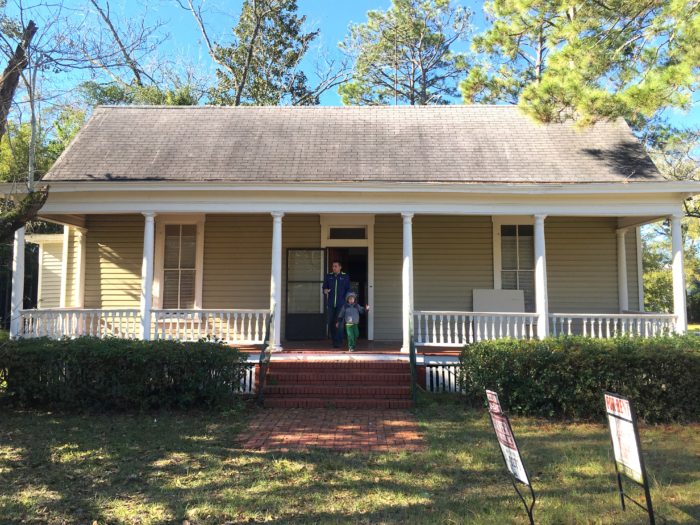 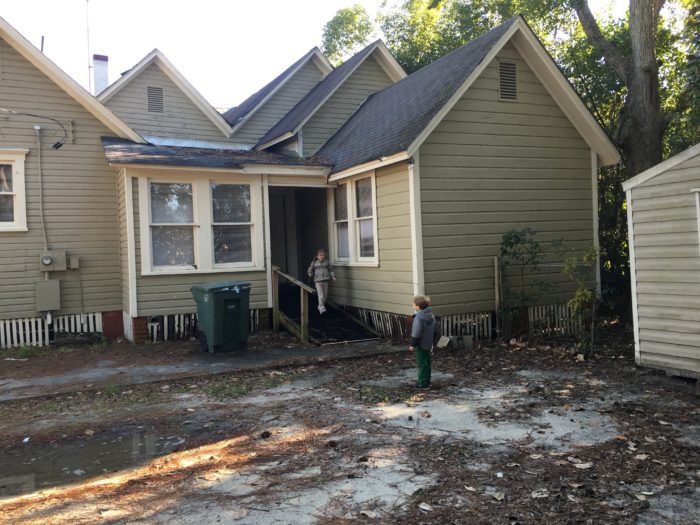 The house had been converted into an office of some sort and weird renovations had been done, leaving some of the house with an odd layout and others untouched. It was a weird combination and one that would require creativity…and a lot of work.

We went inside anyway…and I dreamed… 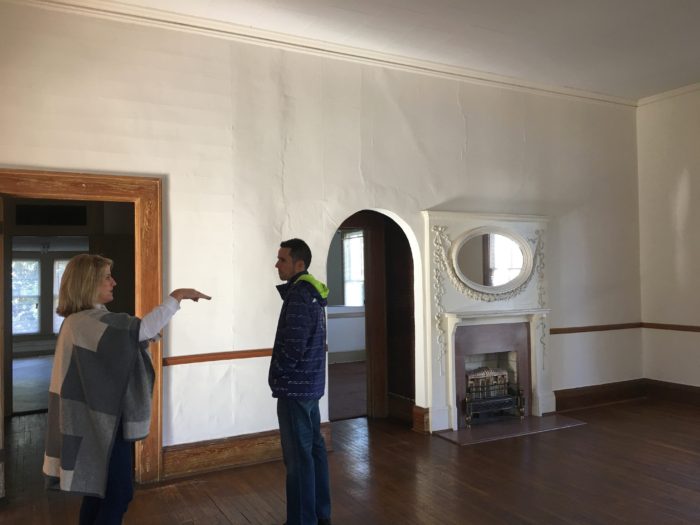 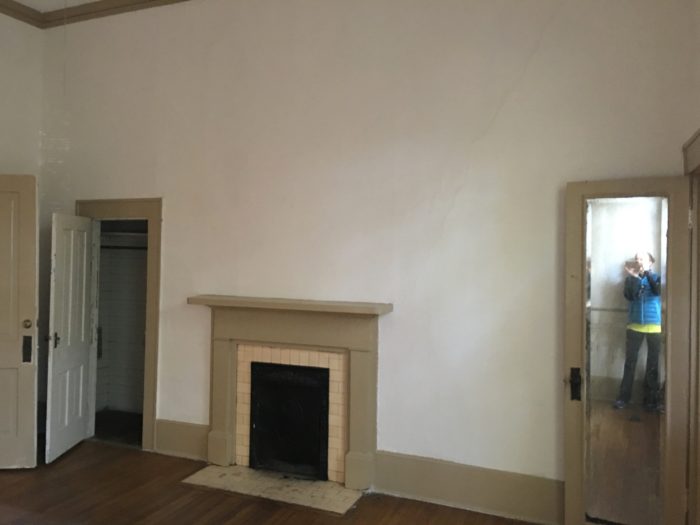 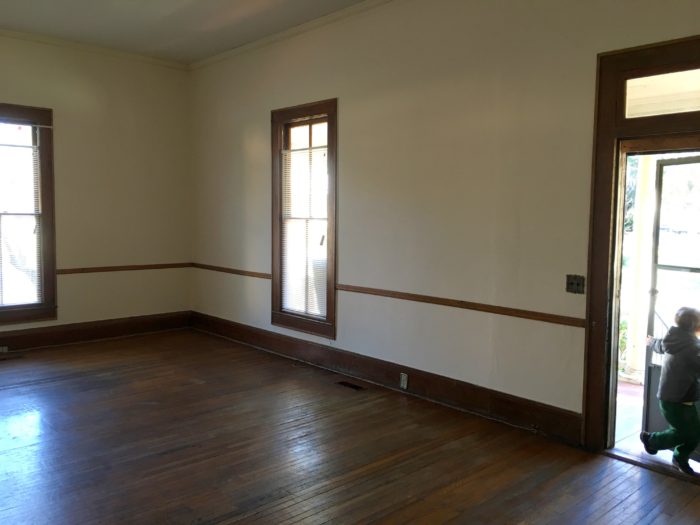 Do you see how high those ceilings are?! And that narrow plank wood floor?? Agh. The asking price left a lot of room in the budget for renovations, but the more we talked about it, it just didn’t make sense. The location, again, made the decision for us.

Turns out, there isn’t a large selection of old old houses like we are used to seeing in Savannah pop up for sale. And there certainly isn’t the huge historic district and volume of older homes we grew up around. We looked at one, built in 1930, that reminded us of the houses in our old neighborhood (Ardsley Park) in Savannah. But there weren’t many for sale. Most of the old ones have been turned into law firms and offices. So. Painful… Why??

We looked at a bunch of homes built in the 60s and 70s. There were several that had great potential, but the renovations would be extensive. I loved this sunroom with its separate entrance. Perfect for a home office… 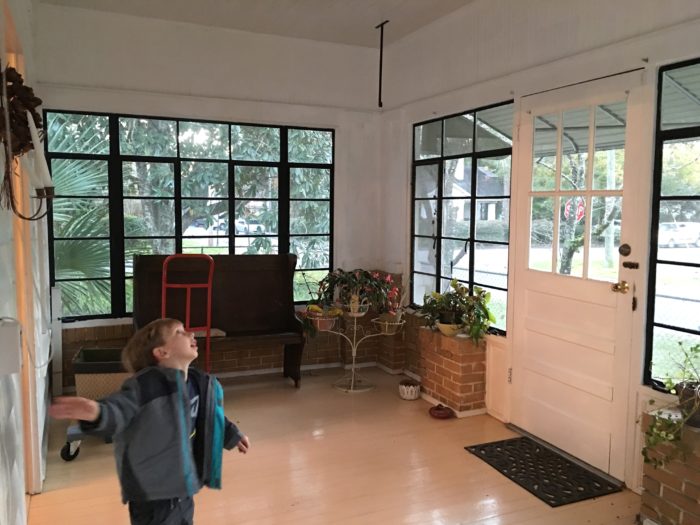 And Joseph liked the ceiling fan. There were several true fixer-uppers, like this one (below), with lots of potential… 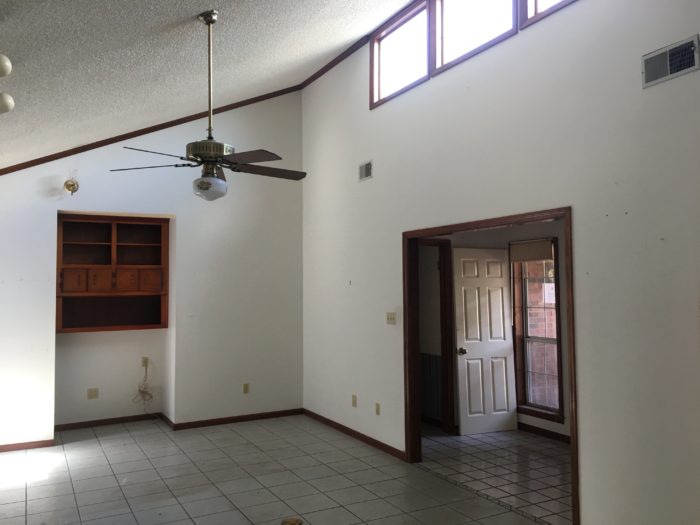 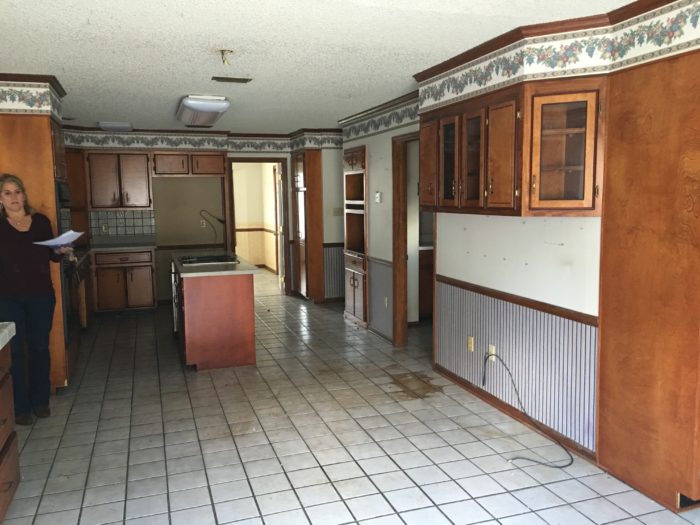 {We looked at some other ones with great potential but in the interest of respecting the home owners, I won’t post any photos of occupied houses.}

We made 4 different trips, looking at over 40 houses total. That is not a typo. On one trip alone, we looked at 26 houses in 24 hours. It was exhausting and overwhelming. Since we didn’t know anything about the town, we didn’t know what in area we wanted to live. For that reason we looked everywhere – city and county.

By the time we received confirmation on our move from the greater UMC, it was too late to renovate a house. Of course, we could’ve rented somewhere while we did renovations, but thought that would be a little too much on our plate as we were also getting settled and trying to establish new church connections. I also didn’t know any contractors or subs yet. Yeah…it would’ve been tough.

Our little dream of buying an old house or updating a fixer-upper, and moving into our long-term home, was not going to happen. At least for now. Time to reassess and be practical, taking into consideration all the factors of our move.

We focused our search on move-in ready homes in great school districts, and landed on the perfect house for us at this time. I say that because it didn’t require any necessary work, was in a good neighborhood, and the district’s elementary school is excellent (state-level awarded, 9/10 rating excellent).

Actually, Joe and I made a separate trip down just to see this house that popped up on the MLS after we saw 3 other homes in the same neighborhood. We drove down on a rainy day, toured the house and, that afternoon, had it under contract. 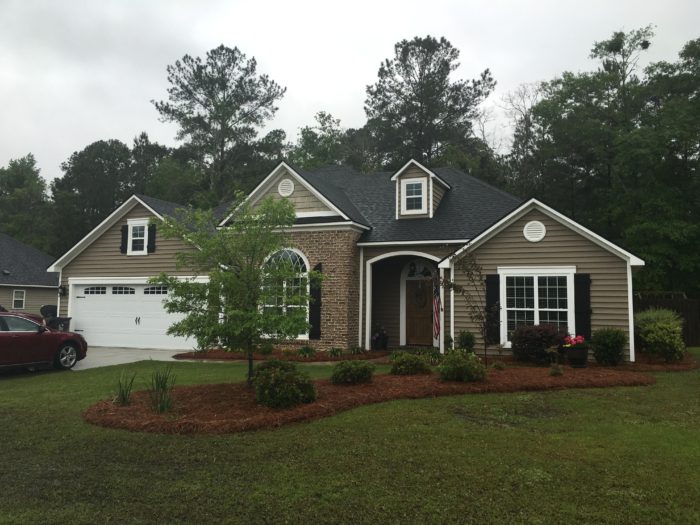 It was an obvious choice in the end. And, I have to say, the modern conveniences of a new house are nice.