This week (like everyone else’s) was a busy one for our family. There were dinners and meetings, field trips and parties…and come last night, we were excited and relieved to be home with nowhere to be until church tomorrow morning.

Last Sunday the cherub choir performed. They were pretty cute singing The Little Drummer Boy, Go Tell it On the Mountain, Silent Night, Mary Had a Baby, and We Wish You a Merry Christmas. Those are my babies in the blue plaid. 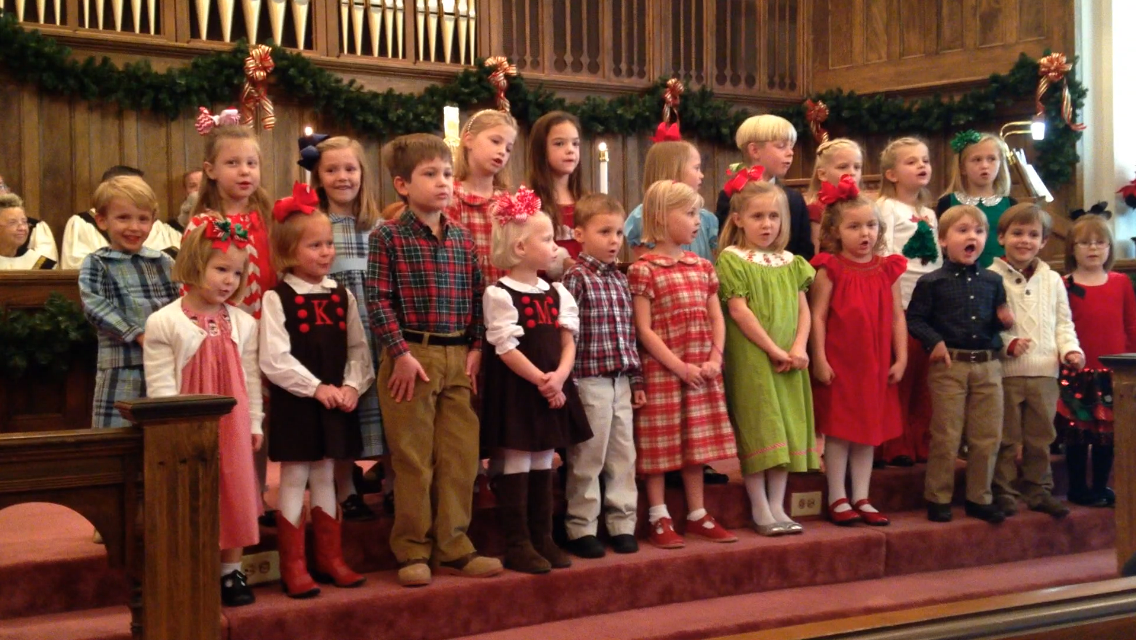 Monday, we hosted my small group (and families) for a Christmas dinner and cookie exchange. 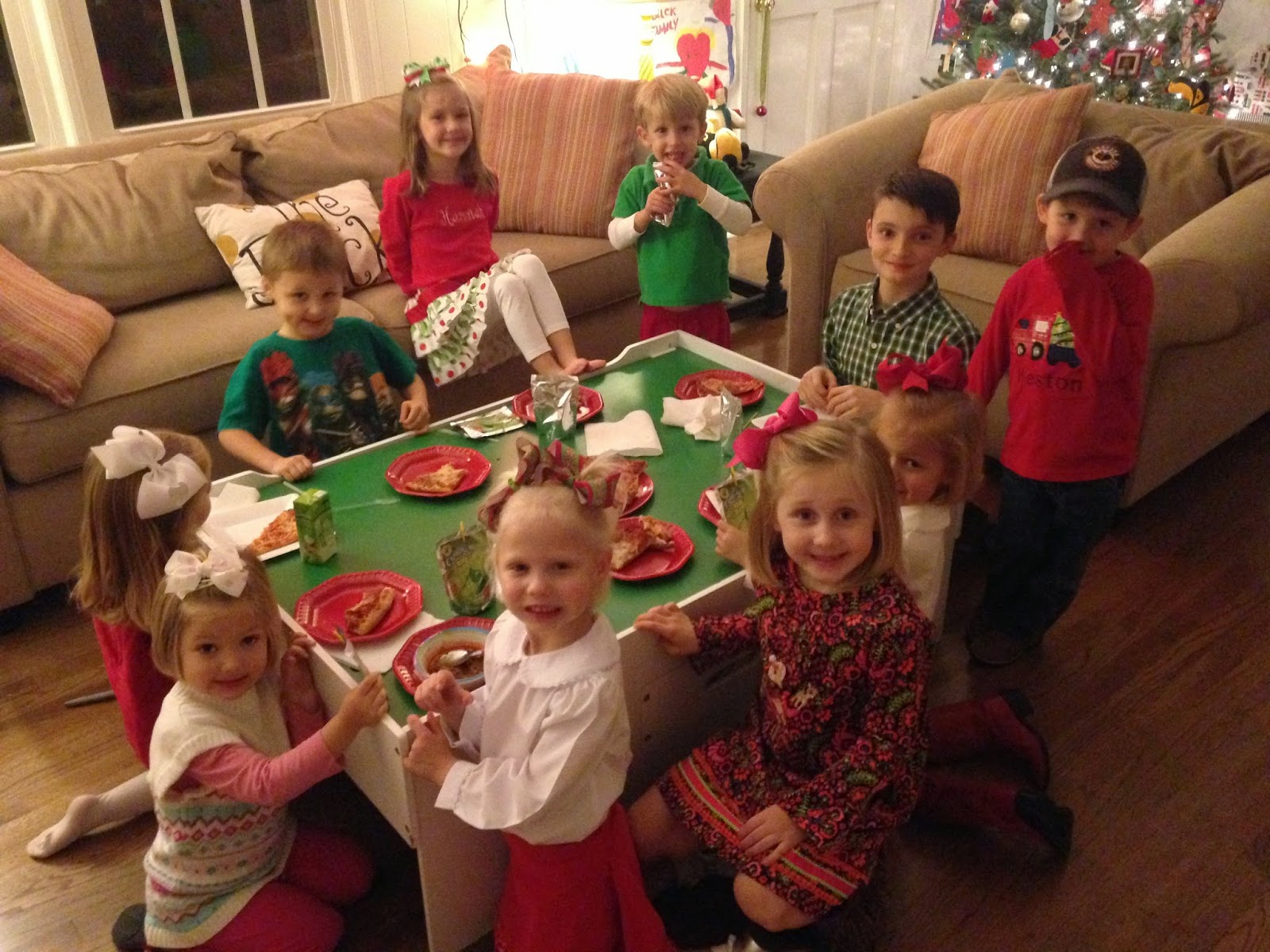 The kids ate pizza around the train table in the playroom, while the grownups ate chili and salad around tables in the dining and living rooms. Not everyone, but most: 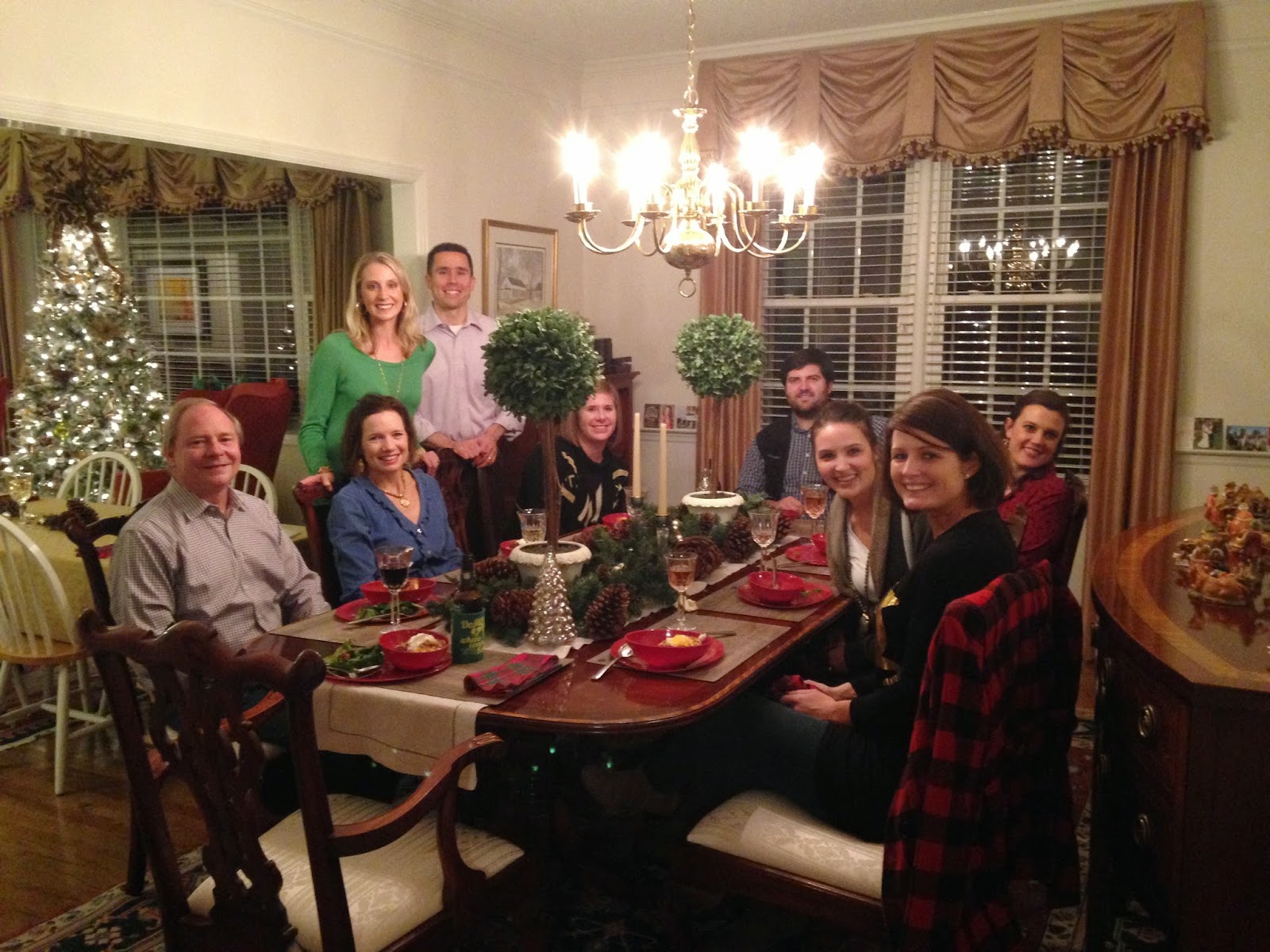 All eight of us have two children each. How funny is that? We were missing one couple, two spouses and five children. Still, for this time a year (and a lot of sickness going around), I think that’s pretty good! We had a wonderful evening. 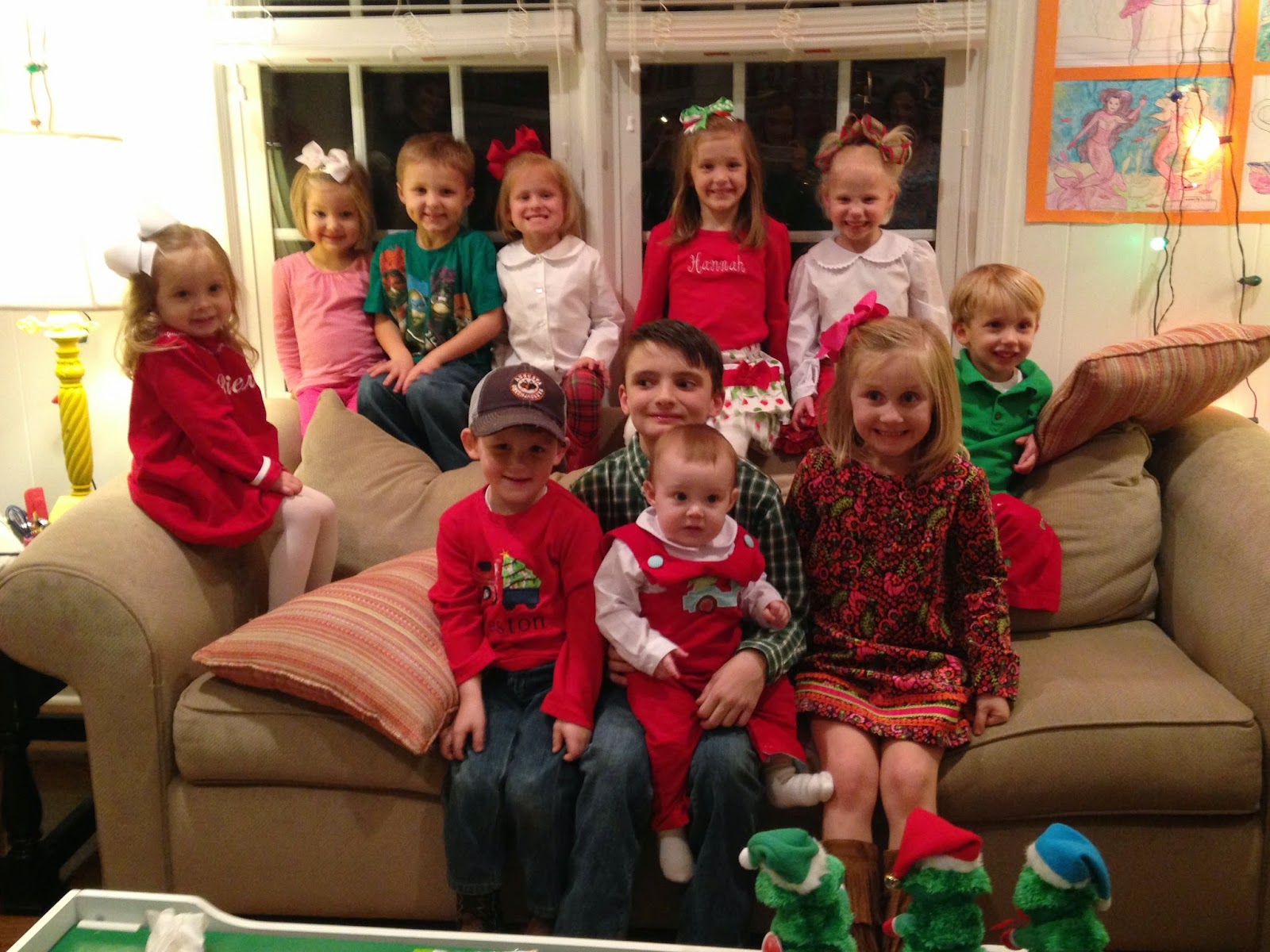 Wednesday, the pre-K took a field trip to the library in Milledgeville for a special Christmas program and a visit from Santa Claus. 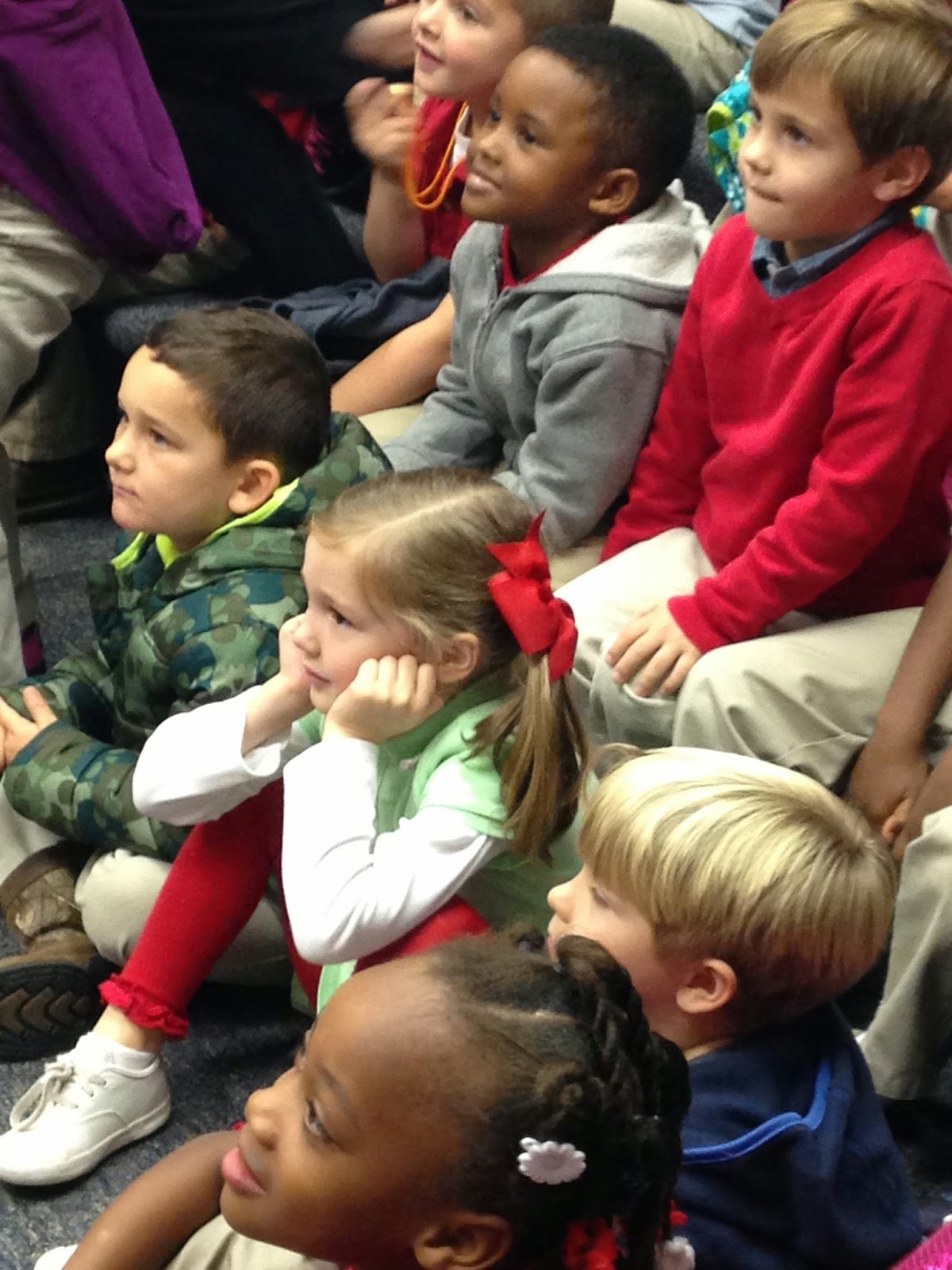 Hannah was one of the chosen to sit on Santa’s lap. She had the greatest smile as she climbed onto his lap. When he asked her what she wanted, she said an Elsa costume “and that’s all.” I think he was taken aback by her briefness. He assured her he would bring her other stuff, too. 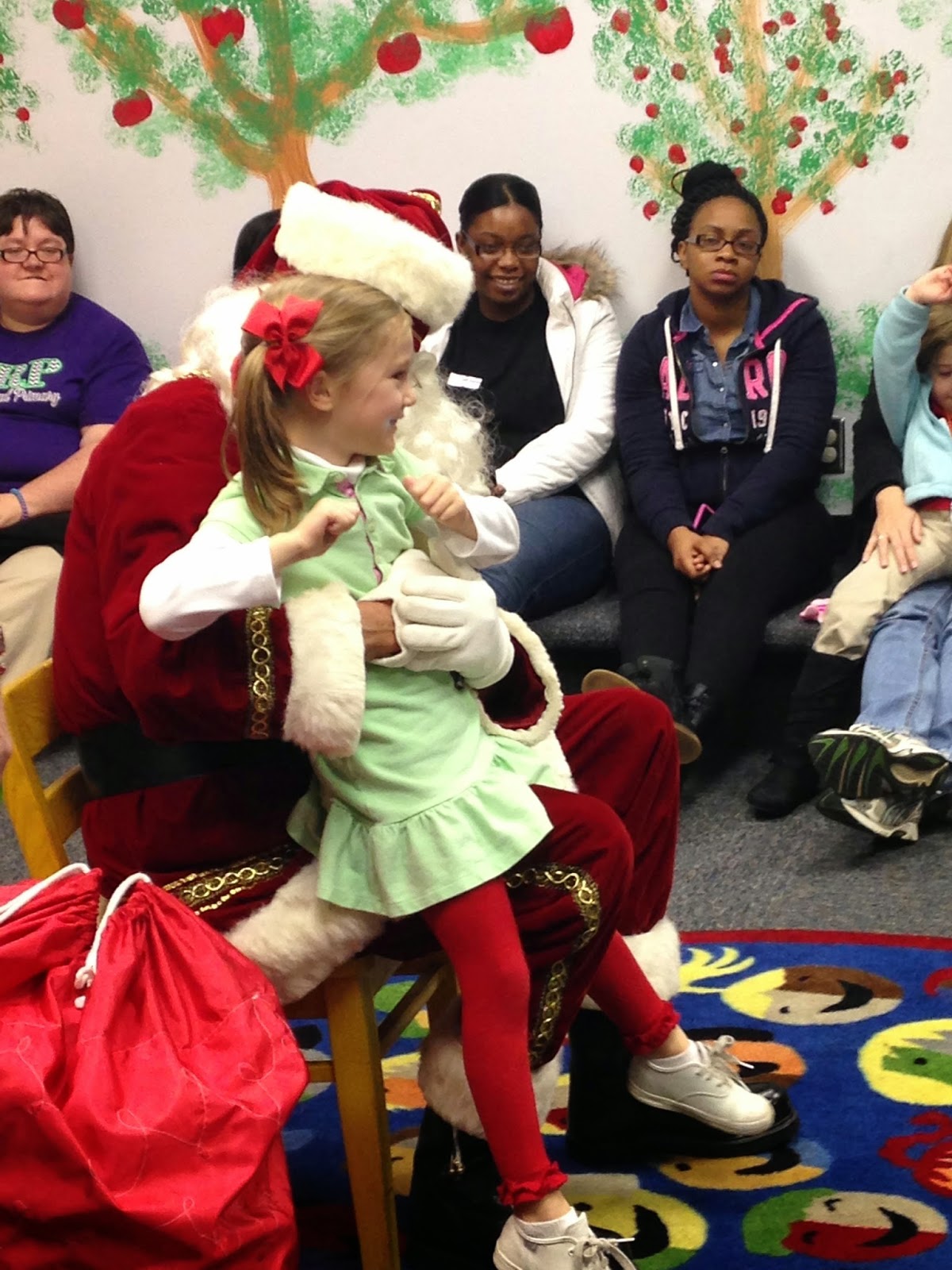 {Now, did you notice she said “Elsa”? It’s been Anna for a long time, so that’s what she’s getting. This past week she’s been saying both. But that’s it. No other wishes. Makes me want to add an Elsa costume, nightgown, something!} 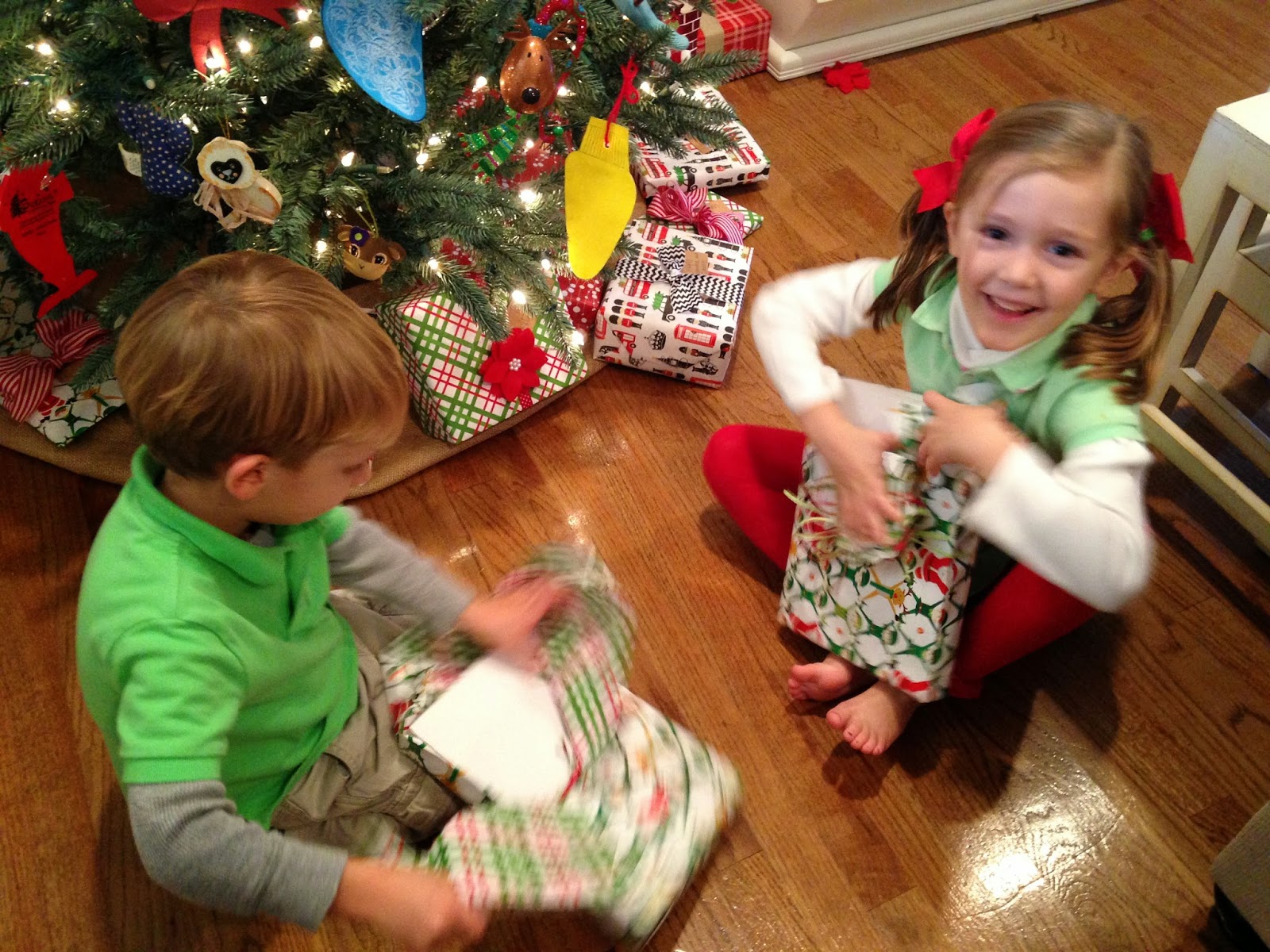 I let them open one present early. These matching pajamas: 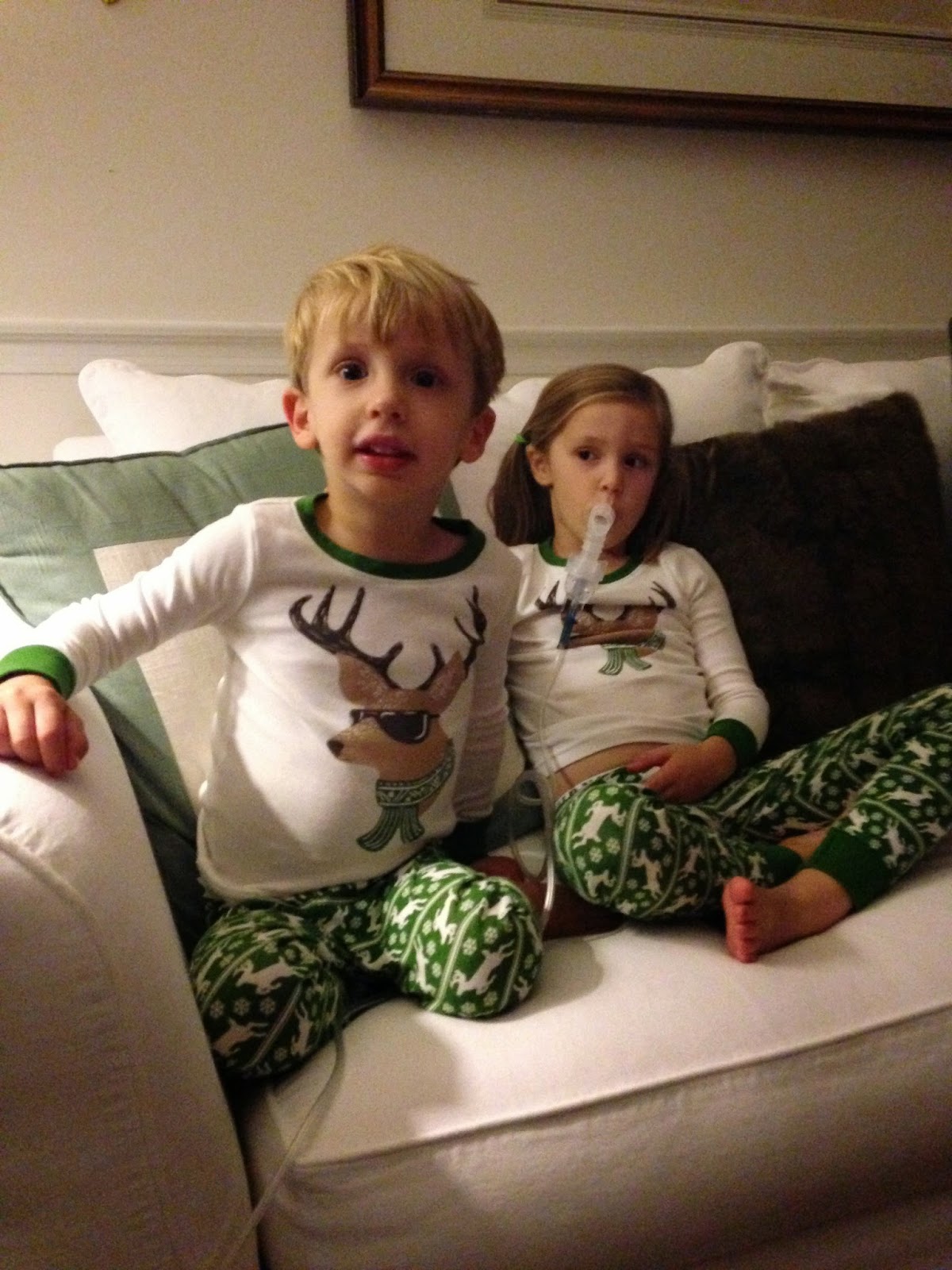 And yes, Hannah’s doing a breathing treatment. She’s had bronchitis and Joseph has had a sinus infection. Both on antibiotics. Hoping for a healthy Christmas week!

The preschool went to see (the best ever) Santa at the bank on Thursday morning. Joseph was not interested in sitting in his lap, at all, this year. But I got him up there by saying “Go show Santa your acorn!!” 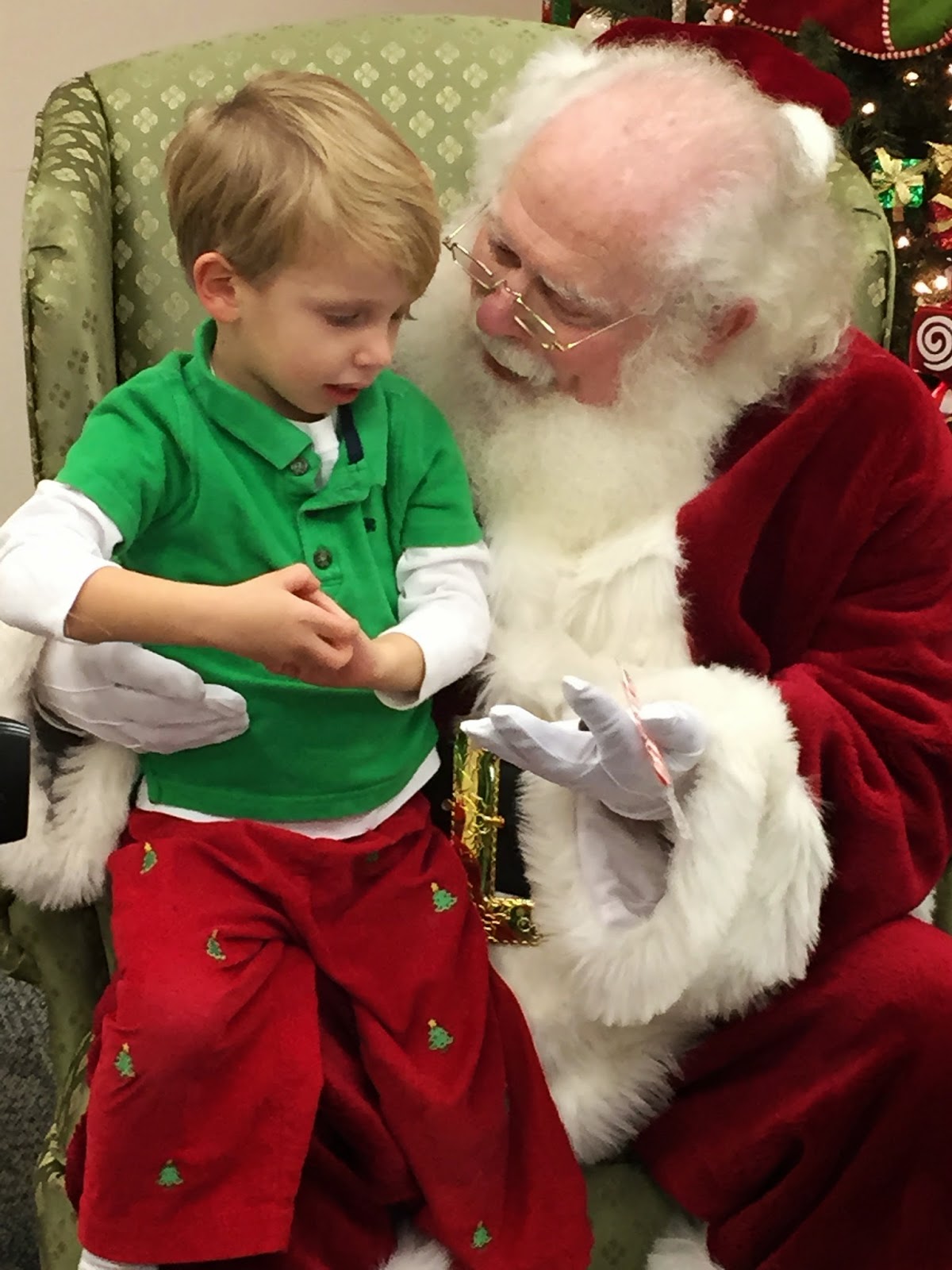 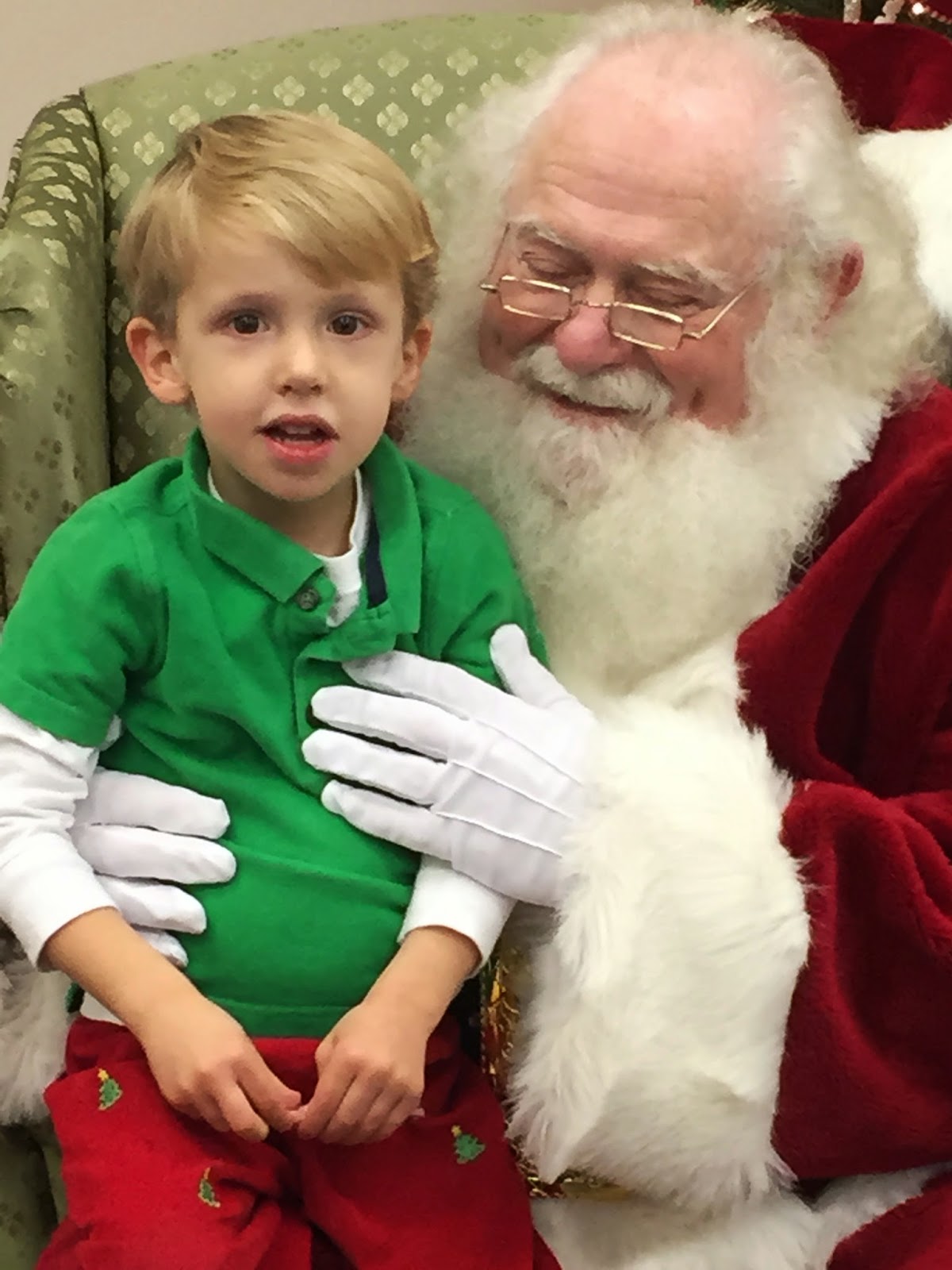 And these were the pictures the bank printed for us: 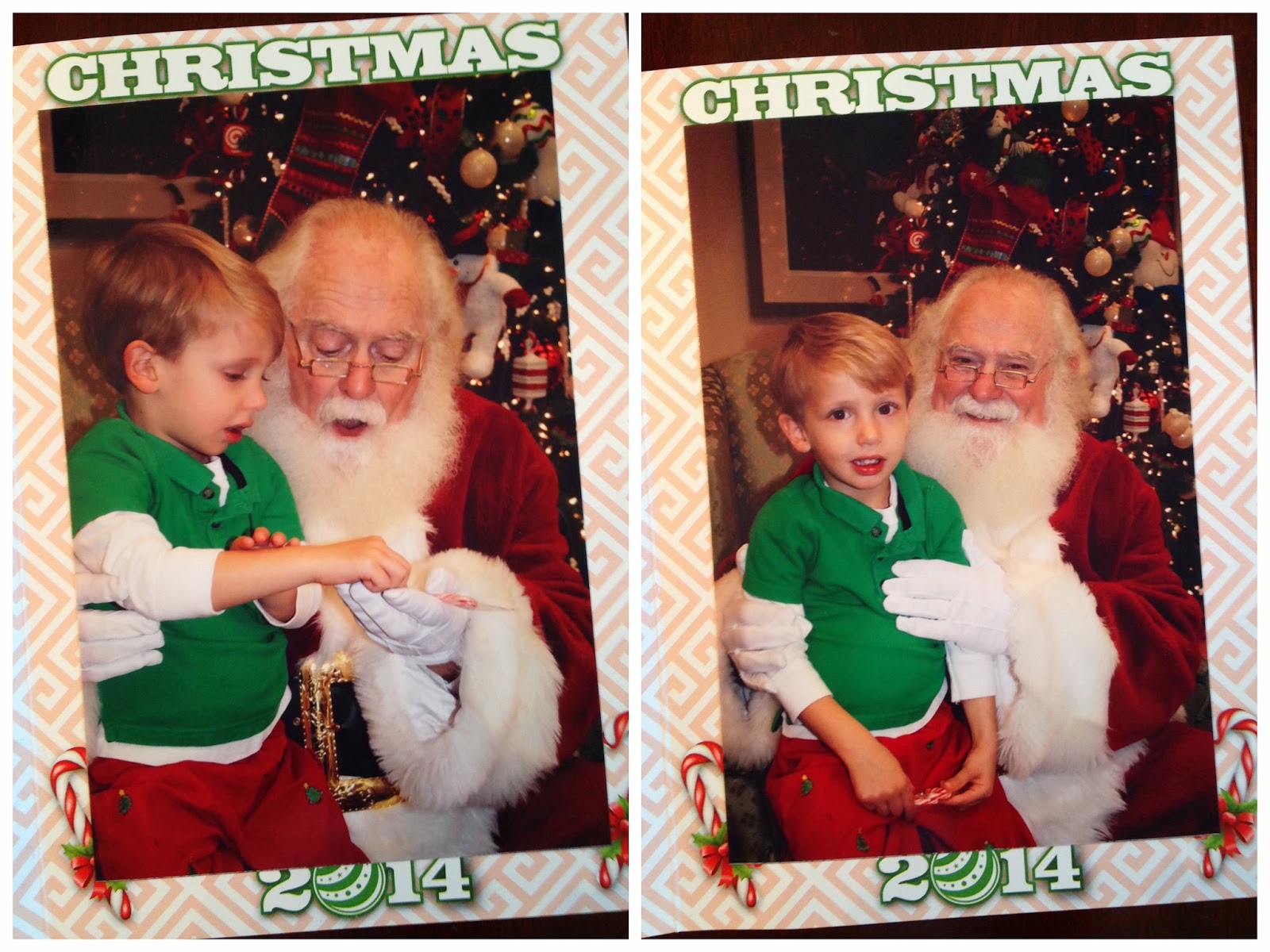 Hannah’s class party was Thursday afternoon. Each parent was to bring a wrapped present for their own child. {I’m not really a fan of this, but I go with the flow.} Hannah was super excited to open her Frozen microphone. I have a feeling we’ll see a lot of performances over the break. 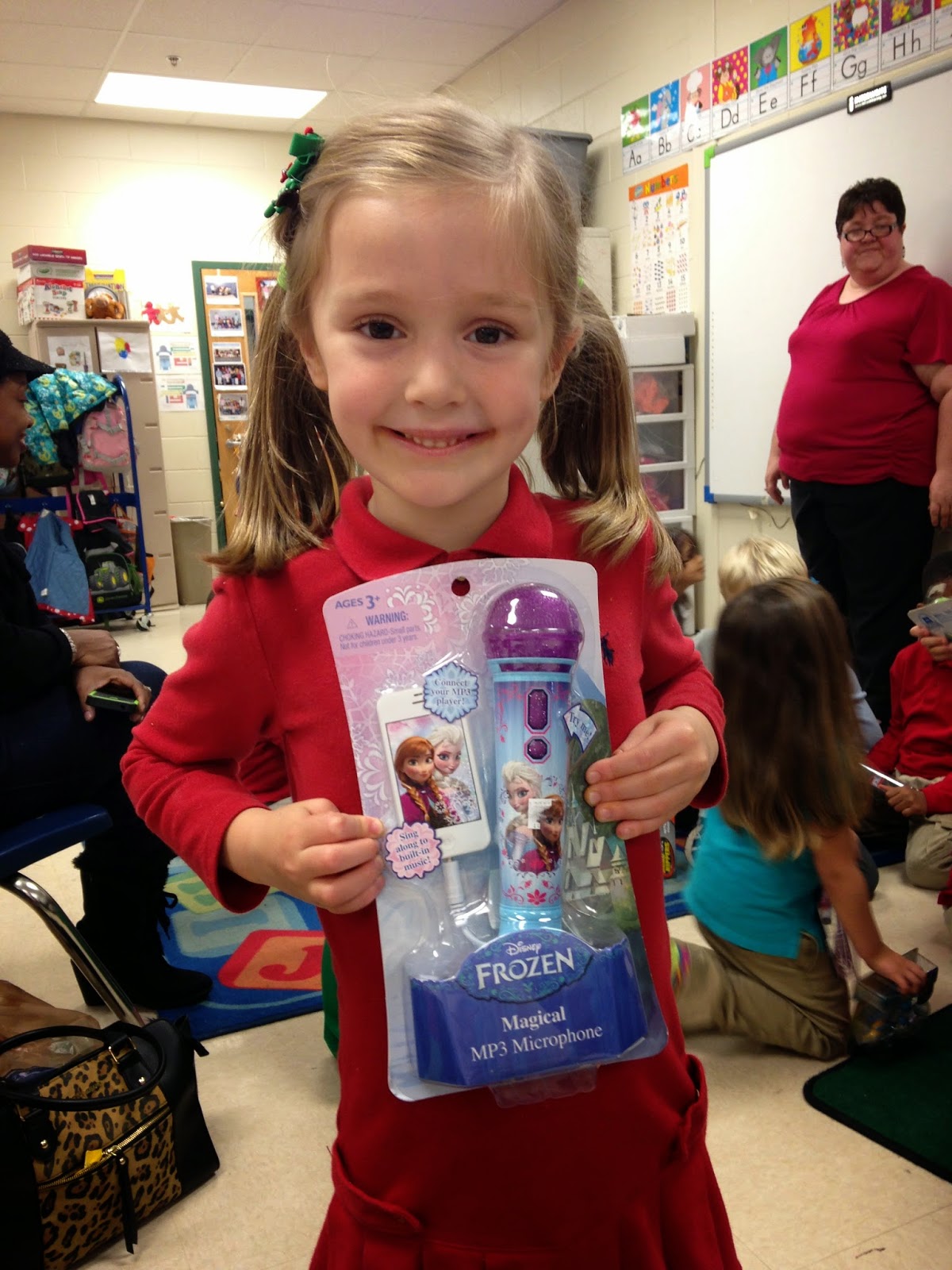 We’ve done more Light ‘Em Up acts, including hiding the dollar bills the kids received during a recent children’s sermon on the shelves of the grocery store. 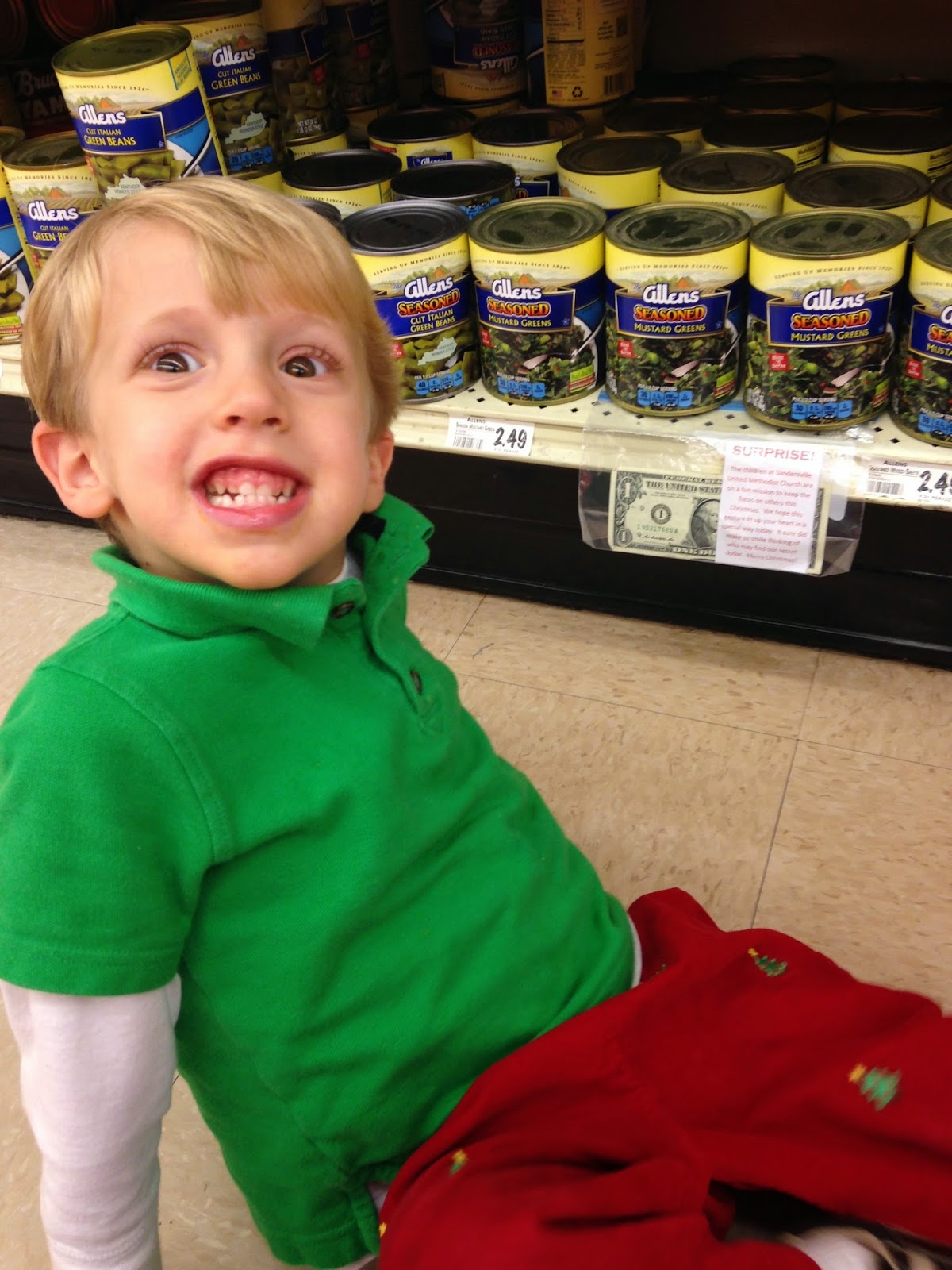 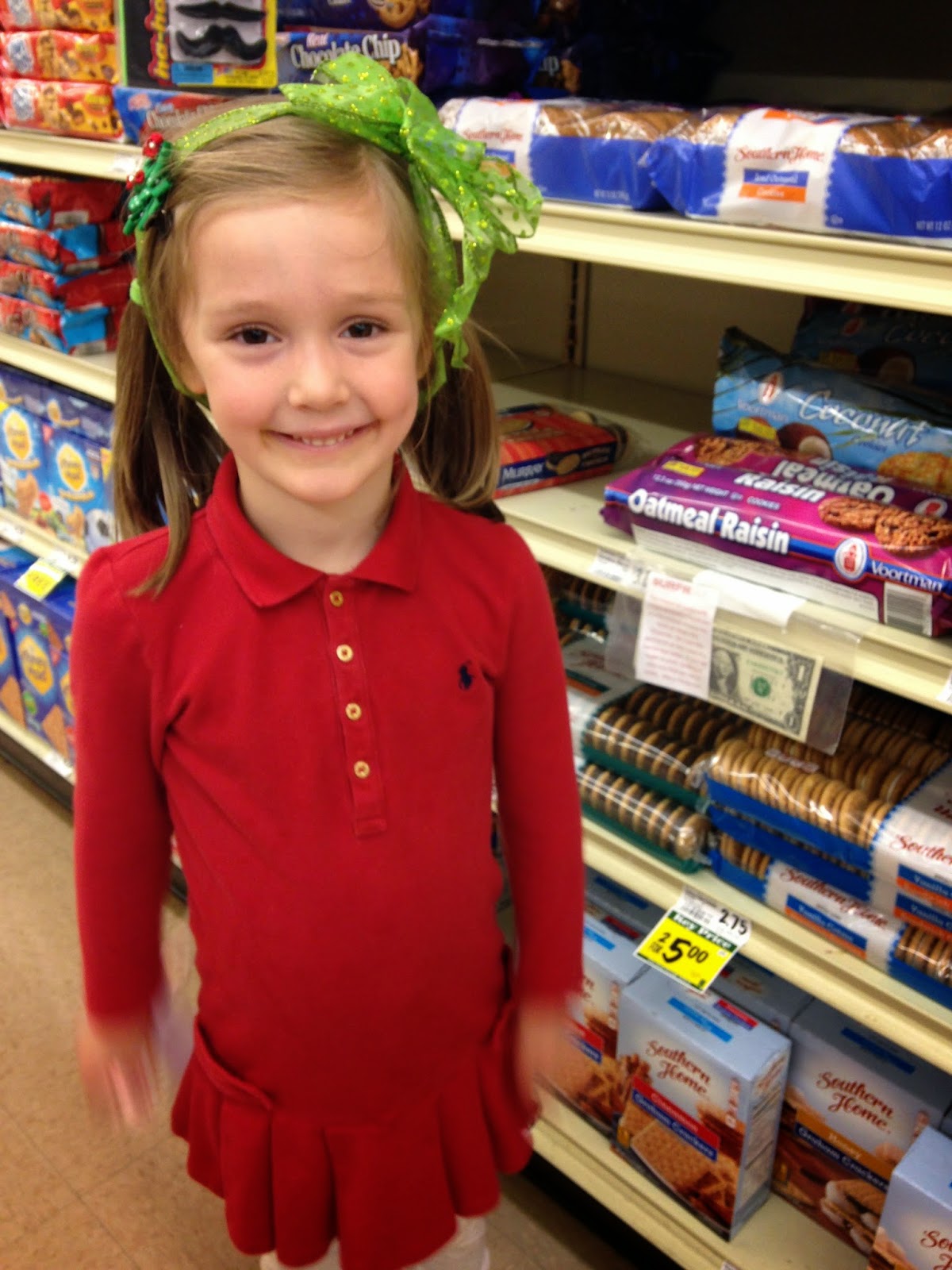 They loved doing that and wanted to keep checking on them, so I had to push for a quick departure so we would be unnoticed!

Joseph’s class party was Friday morning. He is a cheese ball. 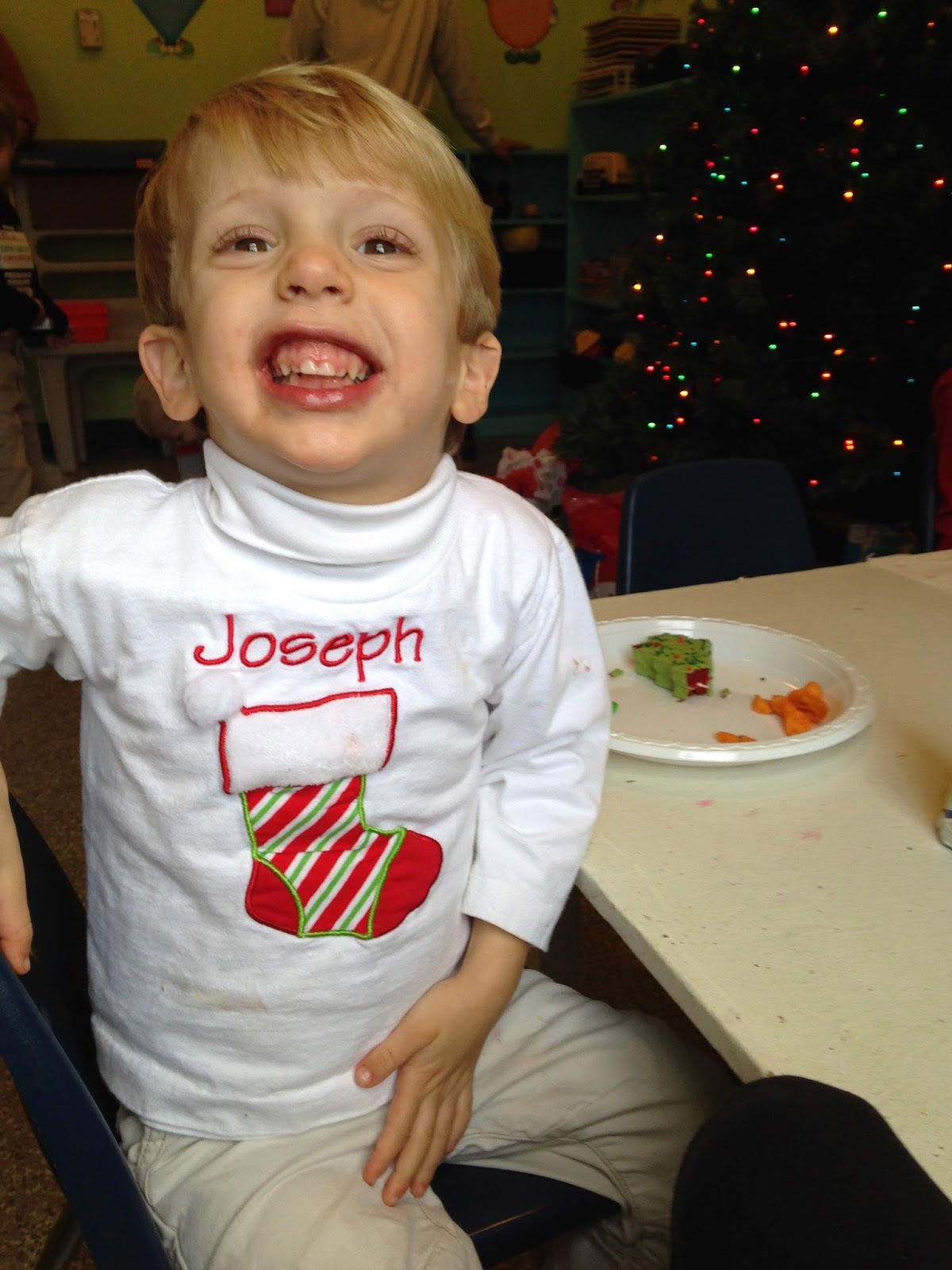 He ate lots of sugar and was extremely excited to open his new tractor from John. {They draw names.} 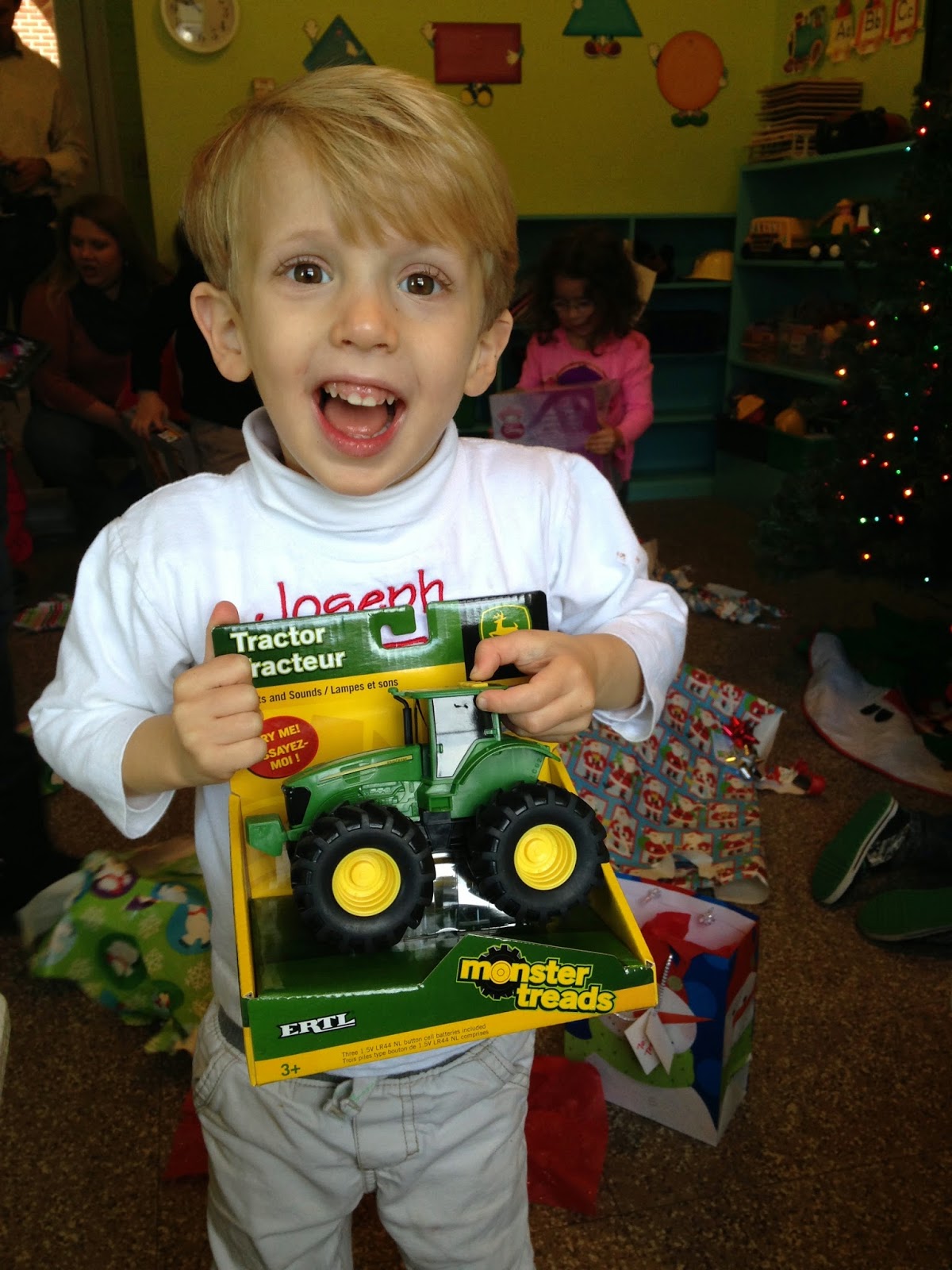 Yesterday afternoon Hannah and I went to a mother/daughter Christmas tea. As she did last year, she wore one of my old dresses. 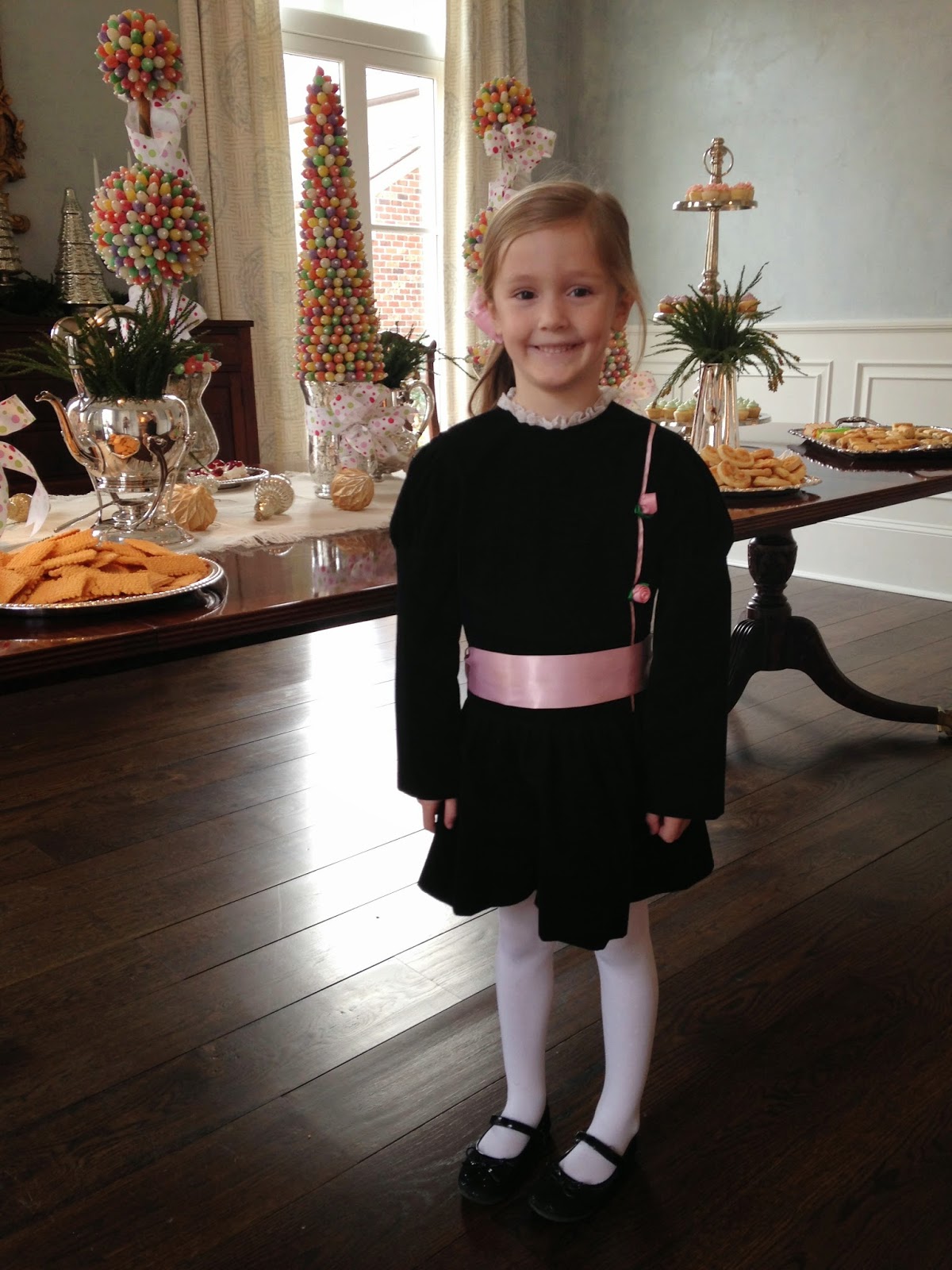 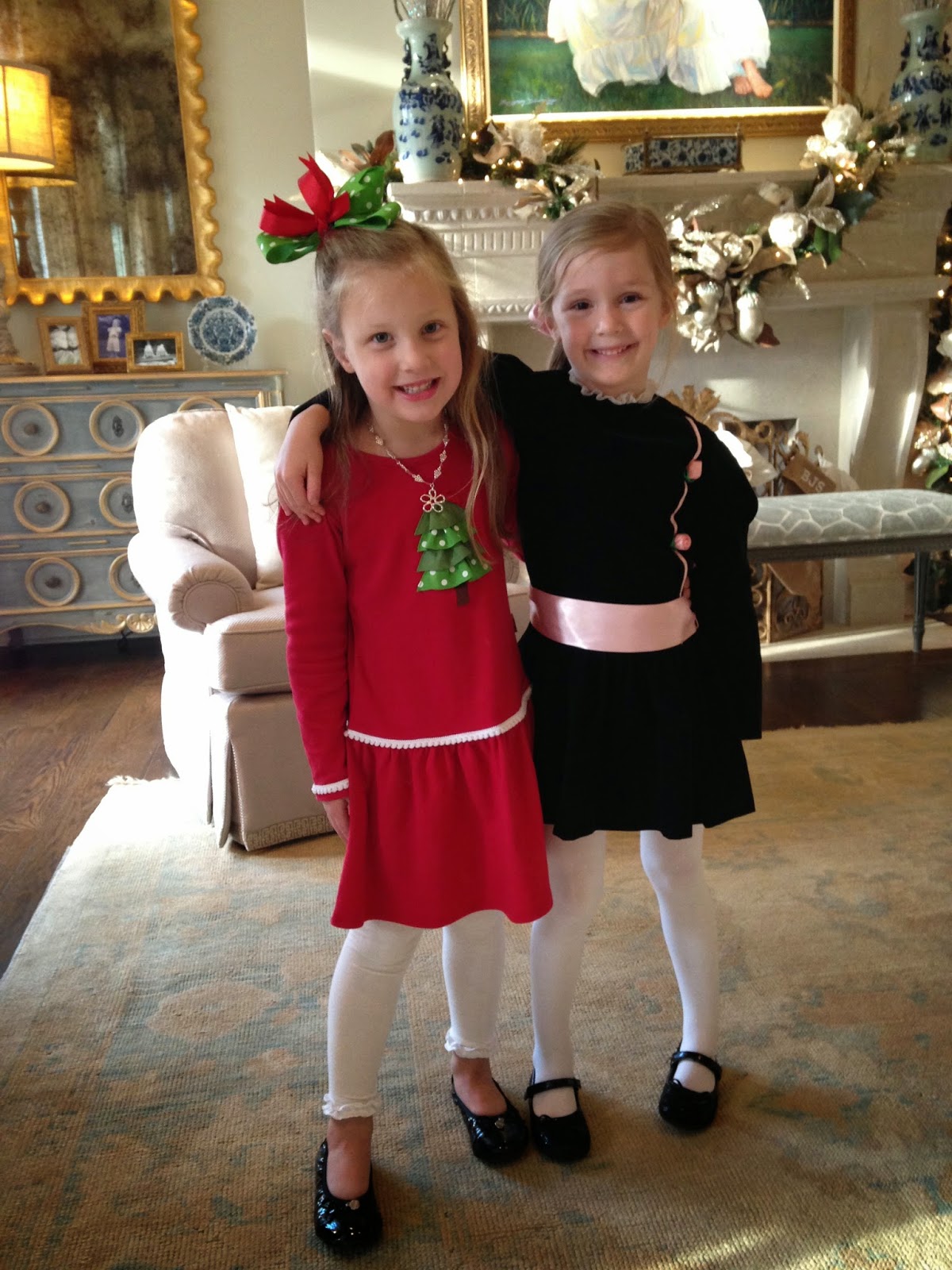 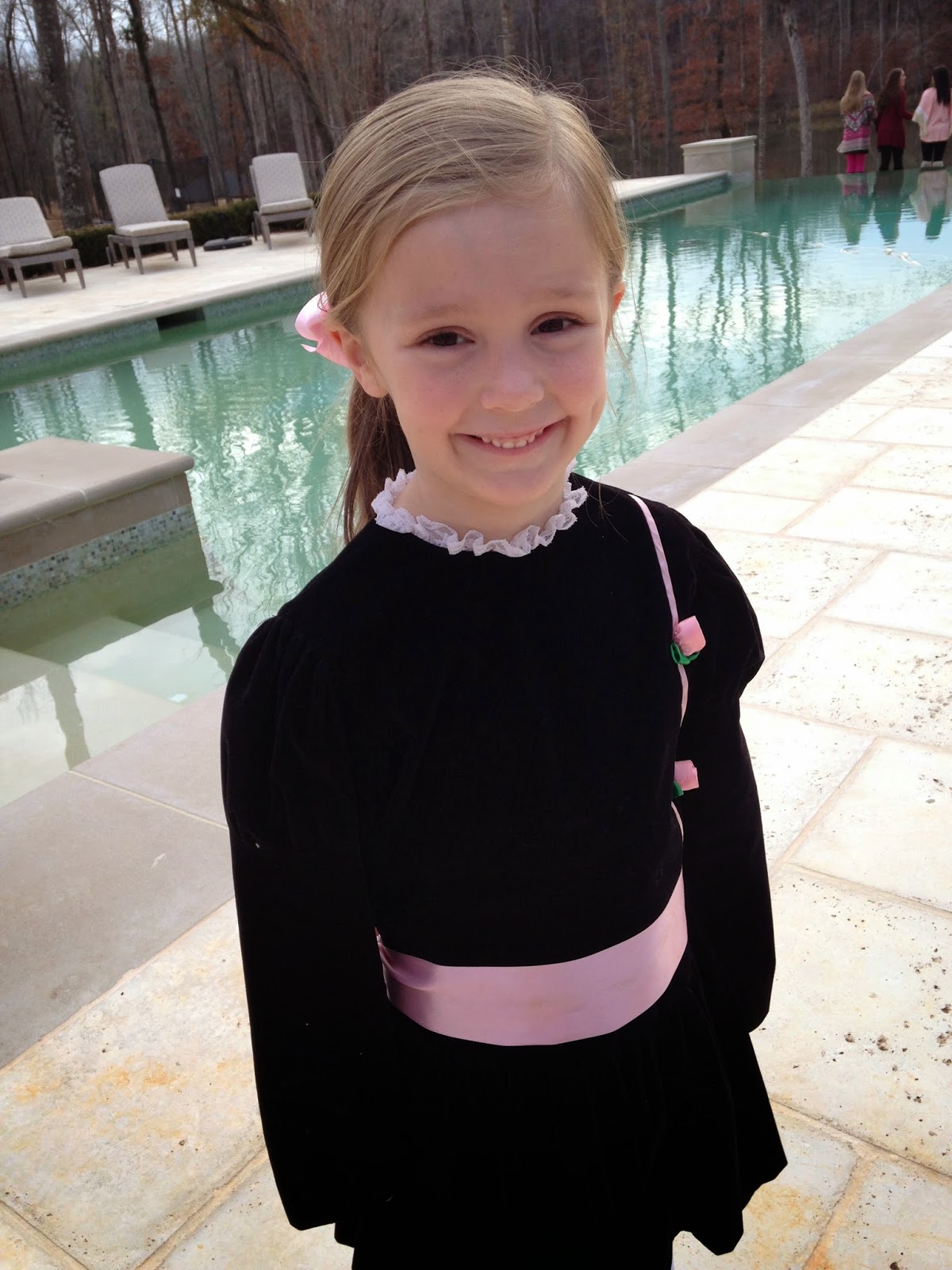 She and her friend, Katie, made reindeer food… 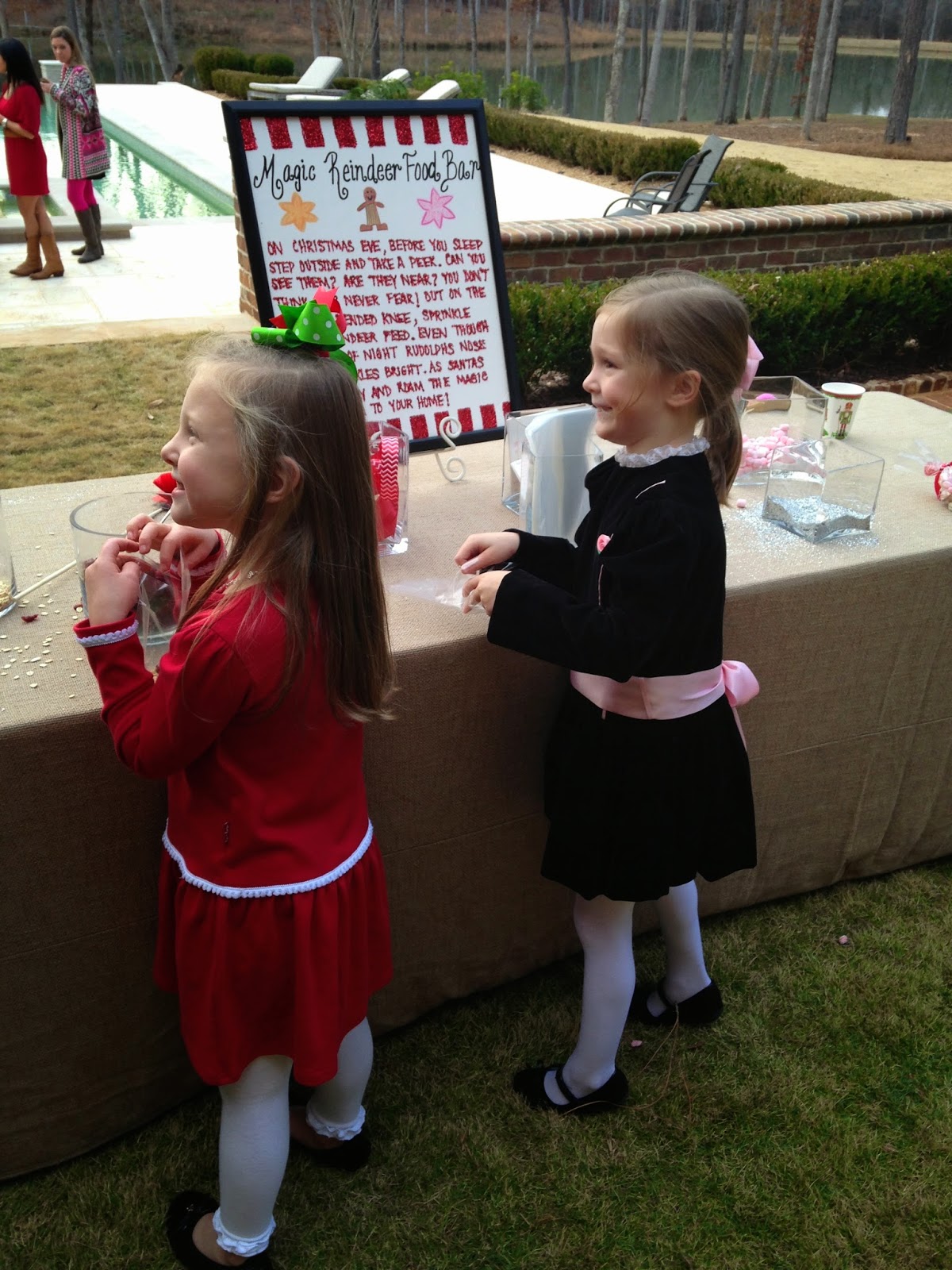 …and then tried to copy the big girls (cheerleaders) who they watched jump off the end of the pool. 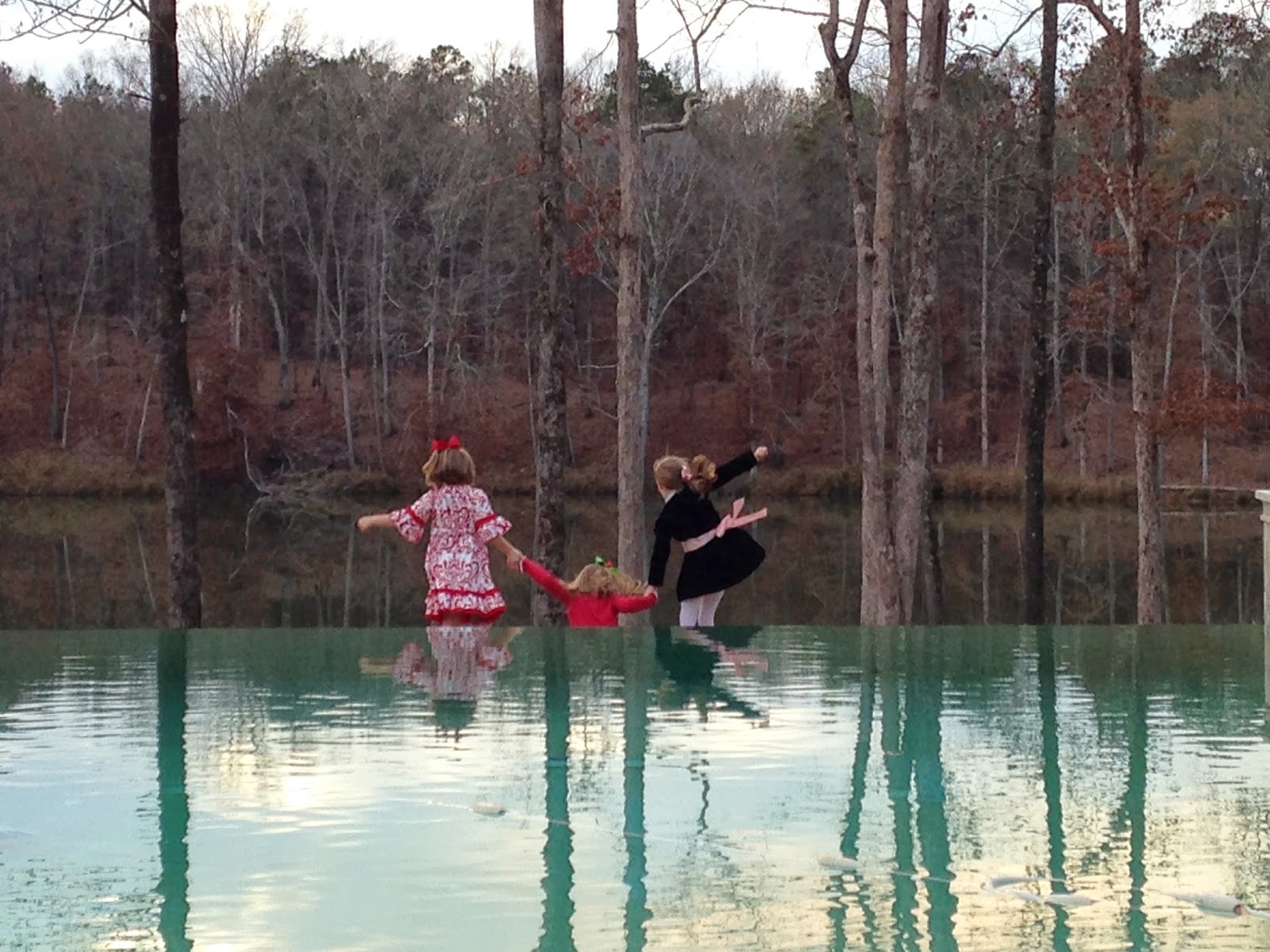 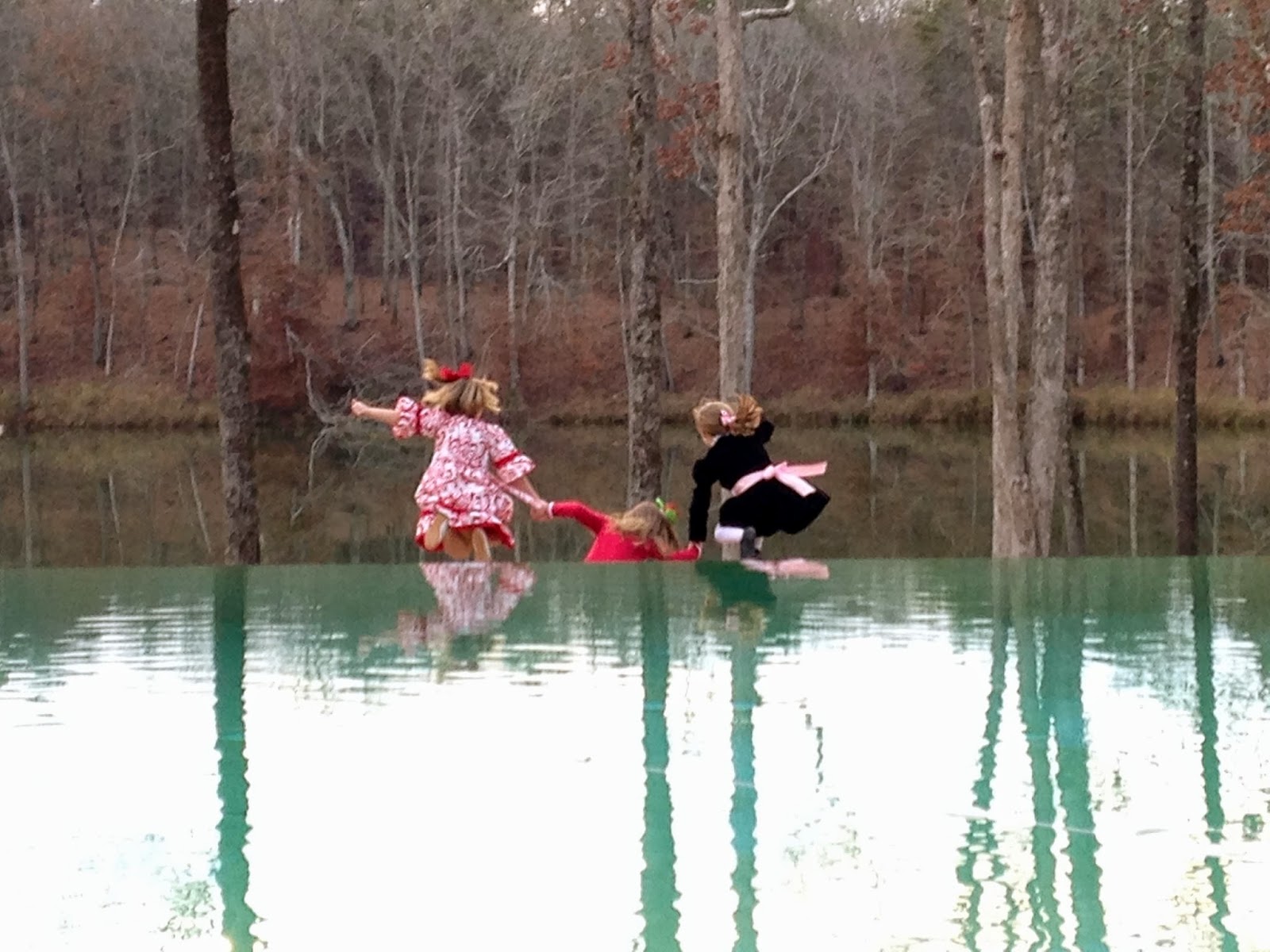 They couldn’t seem to get the timing right, but it sure was cute watching them try. 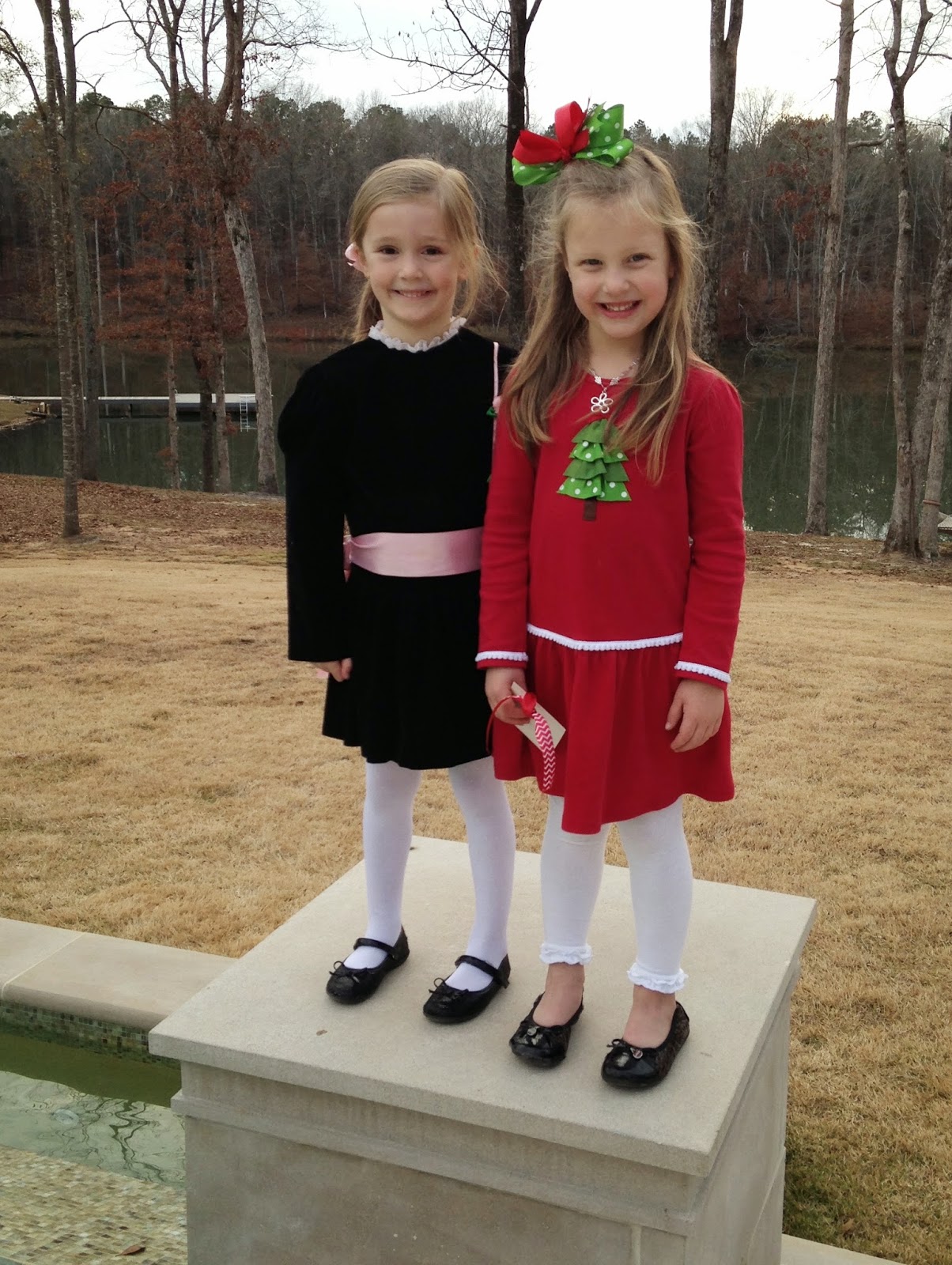 It was a beautiful, fun afternoon. I meant to get a picture of the two of us at the party, but didn’t even think about it while there, so Daddy took a picture of us when we got home. 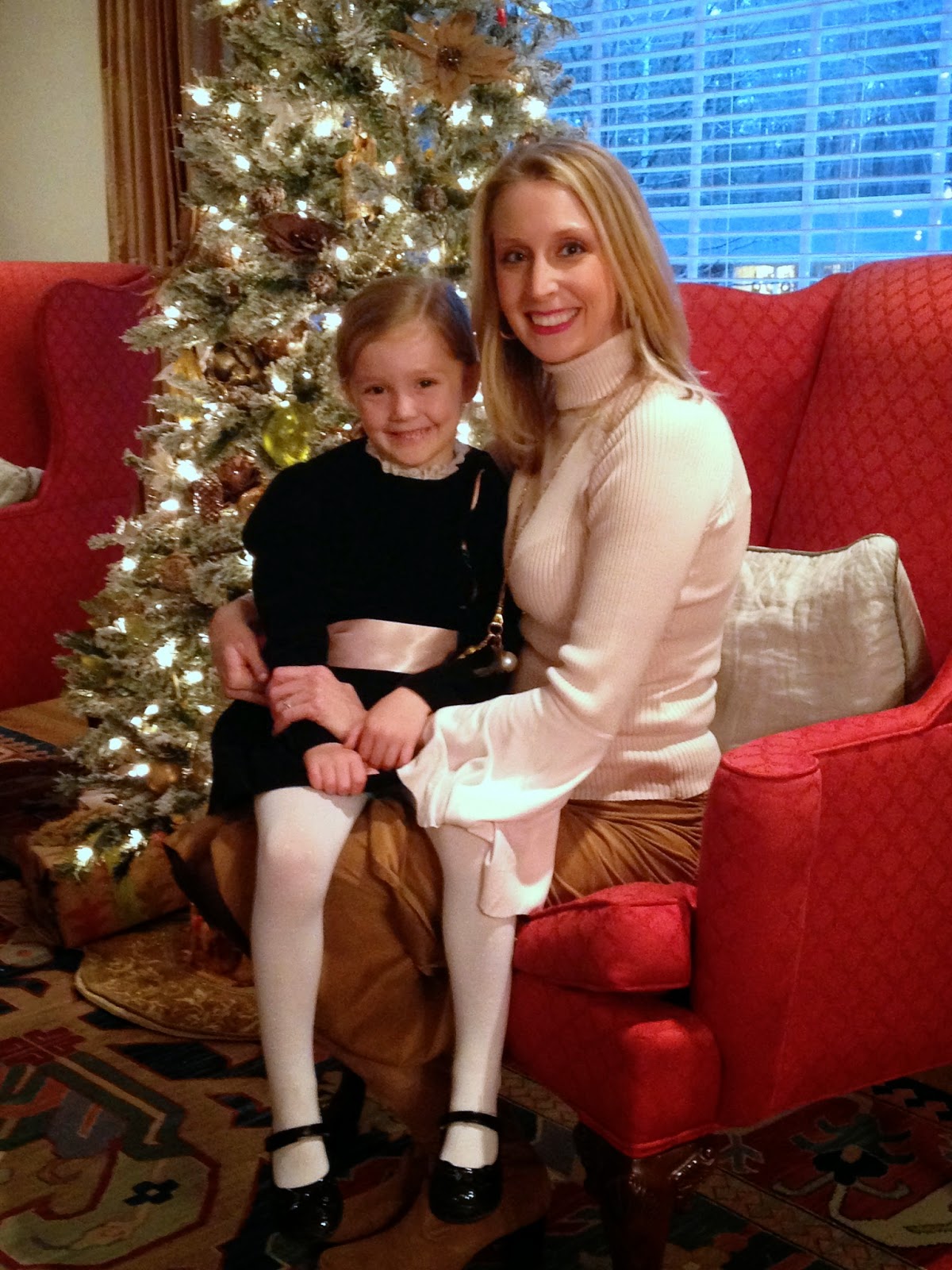 Today, we stayed in our pajamas half the day. I did some laundry and ironing (ugh), and ran a couple quick errands, but other than that, we played, watched Christmas movies, and were kinda lazy. Except for Joe. He ran, did some work, and took apart a gigantic smoked turkey given to us by generous church members, carving it and then boiling it down for broth (hours of work).

This whole house has been under the weather, and we are ready to be well!! I know I speak for y’all when I say, “Flu, stay away!”