It’s October! And clearly I’m having trouble with regular blog posts. So, for that reason, I have some catching up to do. Allow me to take you back a few weeks.

The Monday after our trip, I brought cupcakes to Hannah’s class. Just one last little celebration for the birthday girl! 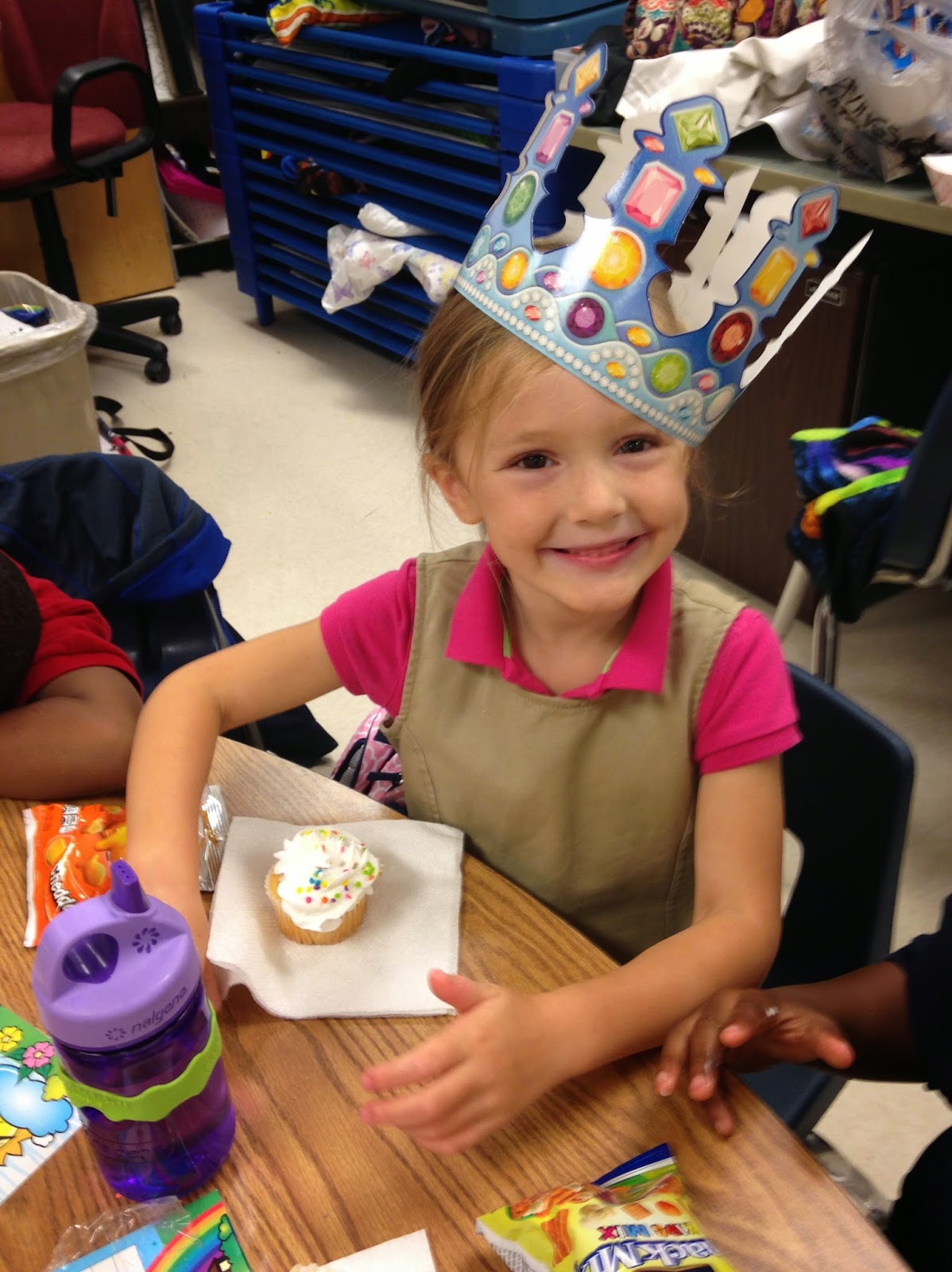 …Even if the class crown was too big. I had to wake Joseph up from his nap, but he was fine once he realized cupcakes were involved. He tagged along happily. 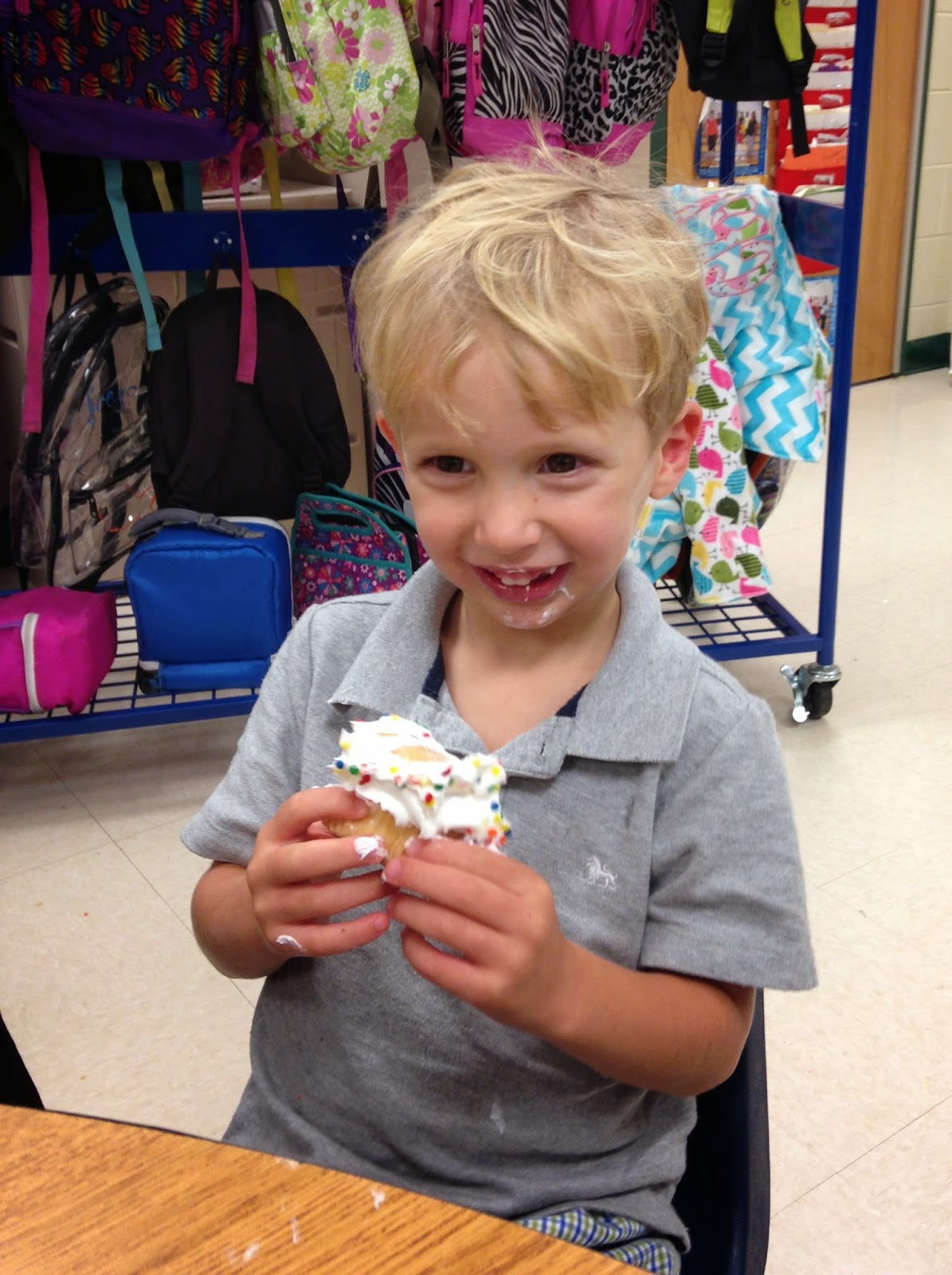 We were so excited to get back home from our trip and see the new driveway. I cannot tell you how many times a child has fallen, tripping over the huge cracks and uneven surfaces, on their way to the mailbox. A new driveway cost a lot of money and it’s something that has been on the church trustees committee’s to-do list for a long time. Finally, it’s DONE!!! {Insert big smile from me here.} 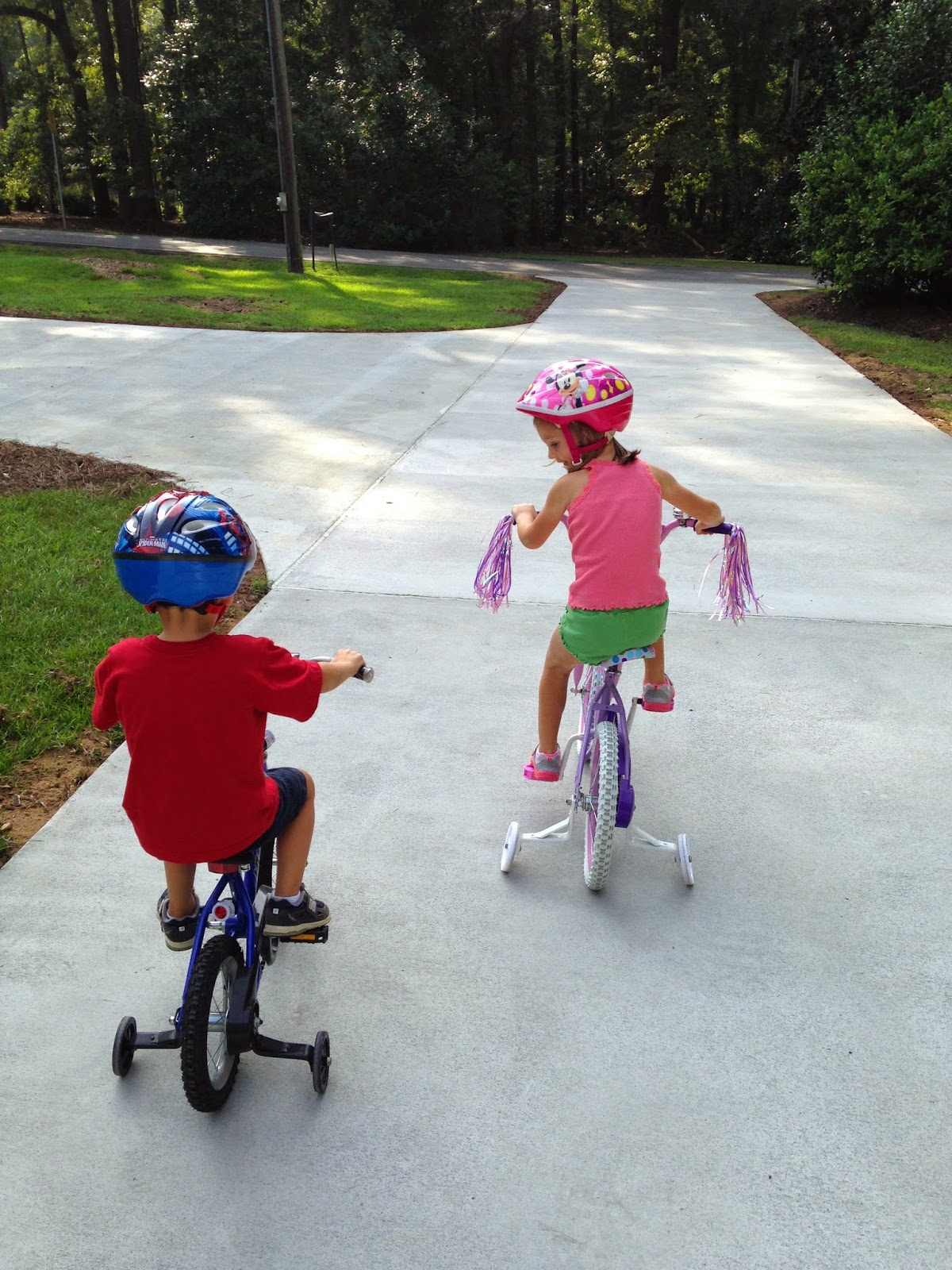 Now they can run, play and ride their bikes on smooth, beautiful pavement.

Show and tell has become a favorite part of the week for Hannah. Each Friday she can bring in something that starts with the letter they are working on. A couple weeks ago she took a wooden fish Joe and I brought back from Mexico. 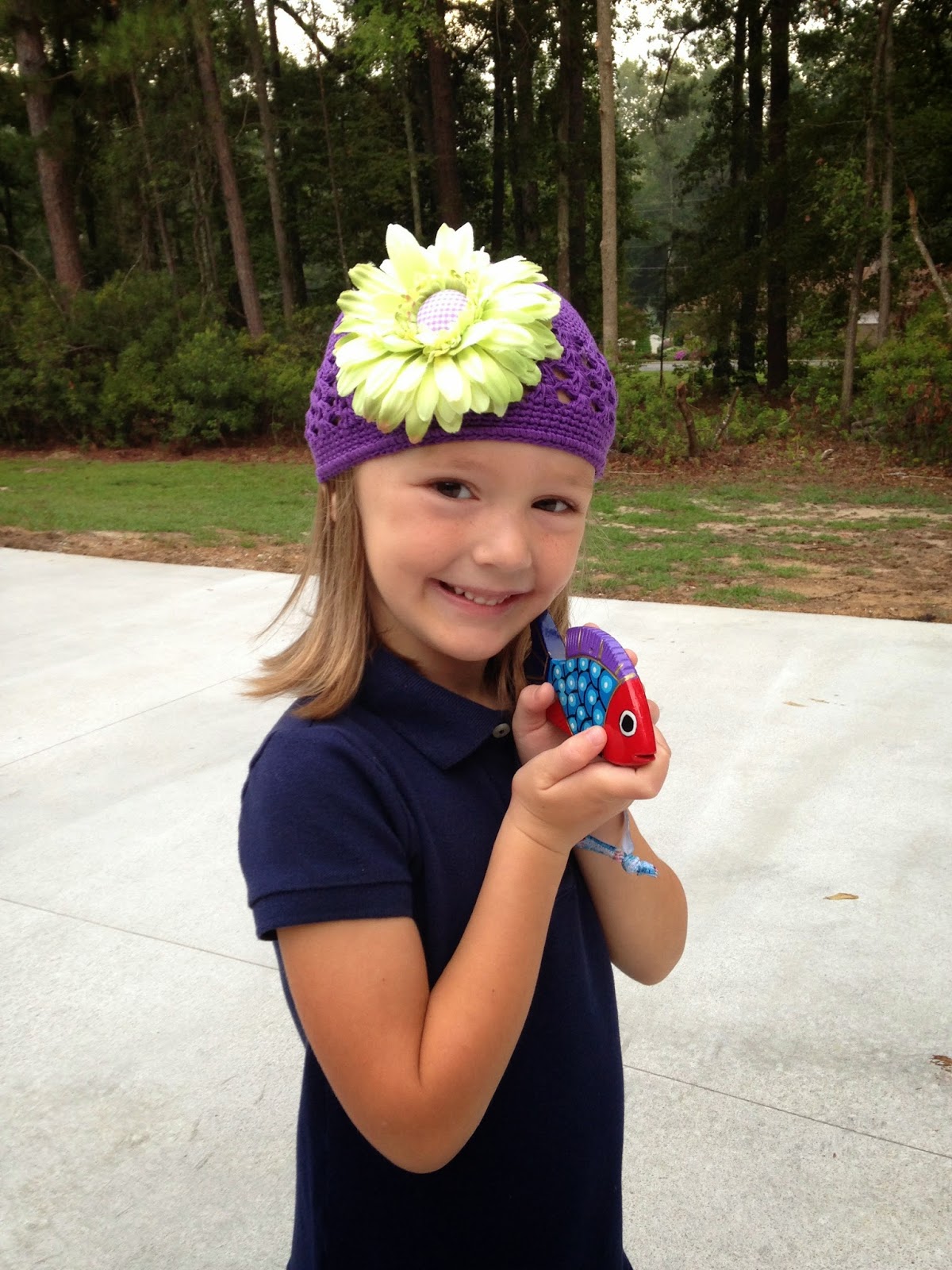 It was also “Hats for Hope” day, and in support of childhood cancer she brought a donation and got to wear a hat. The girl loves accessories!

The letter the next week was L. She brought in a lion she made in preschool. 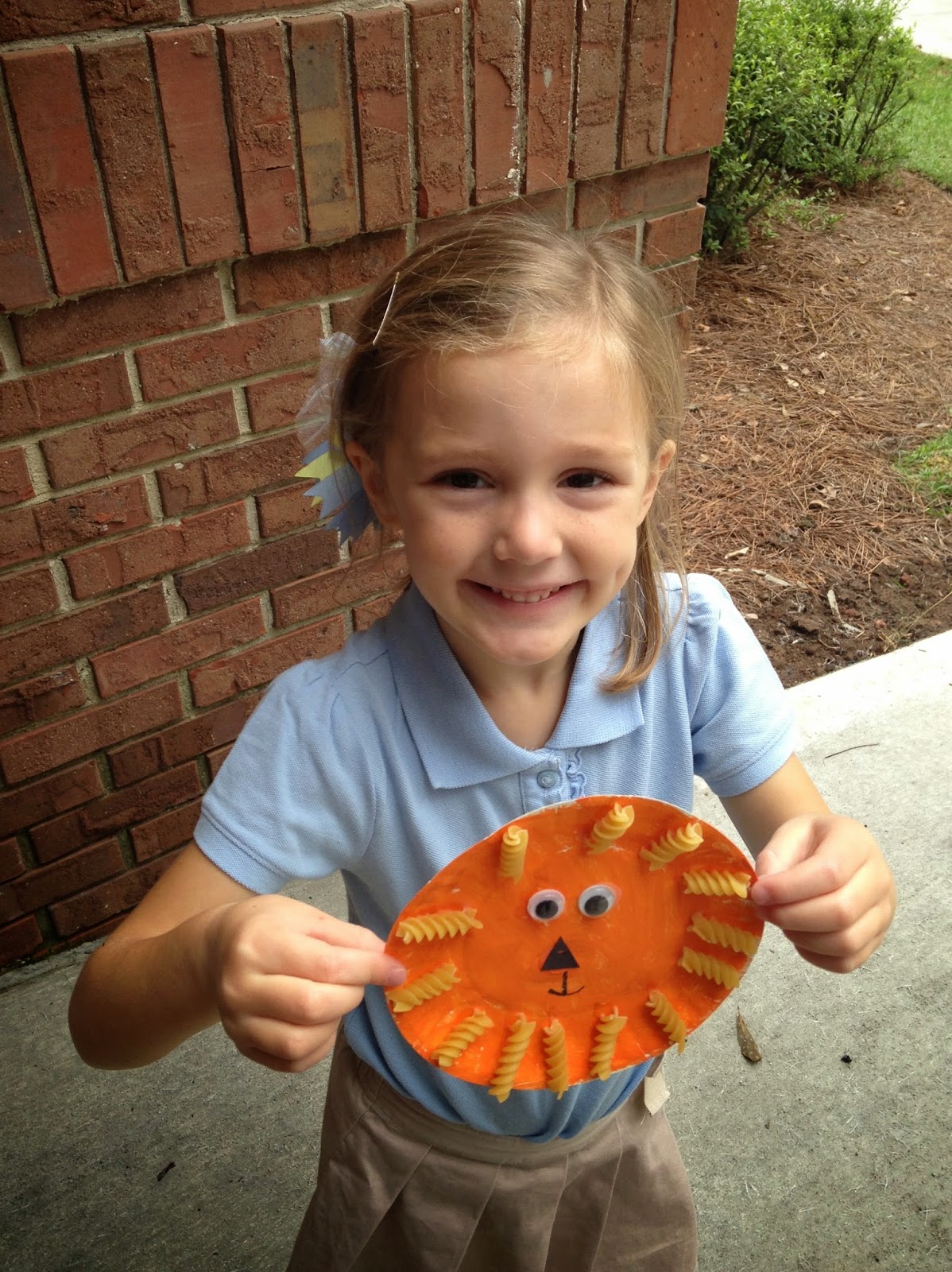 Show and tell is a favorite part of the week. On the weekends, she’s a cheerleader. 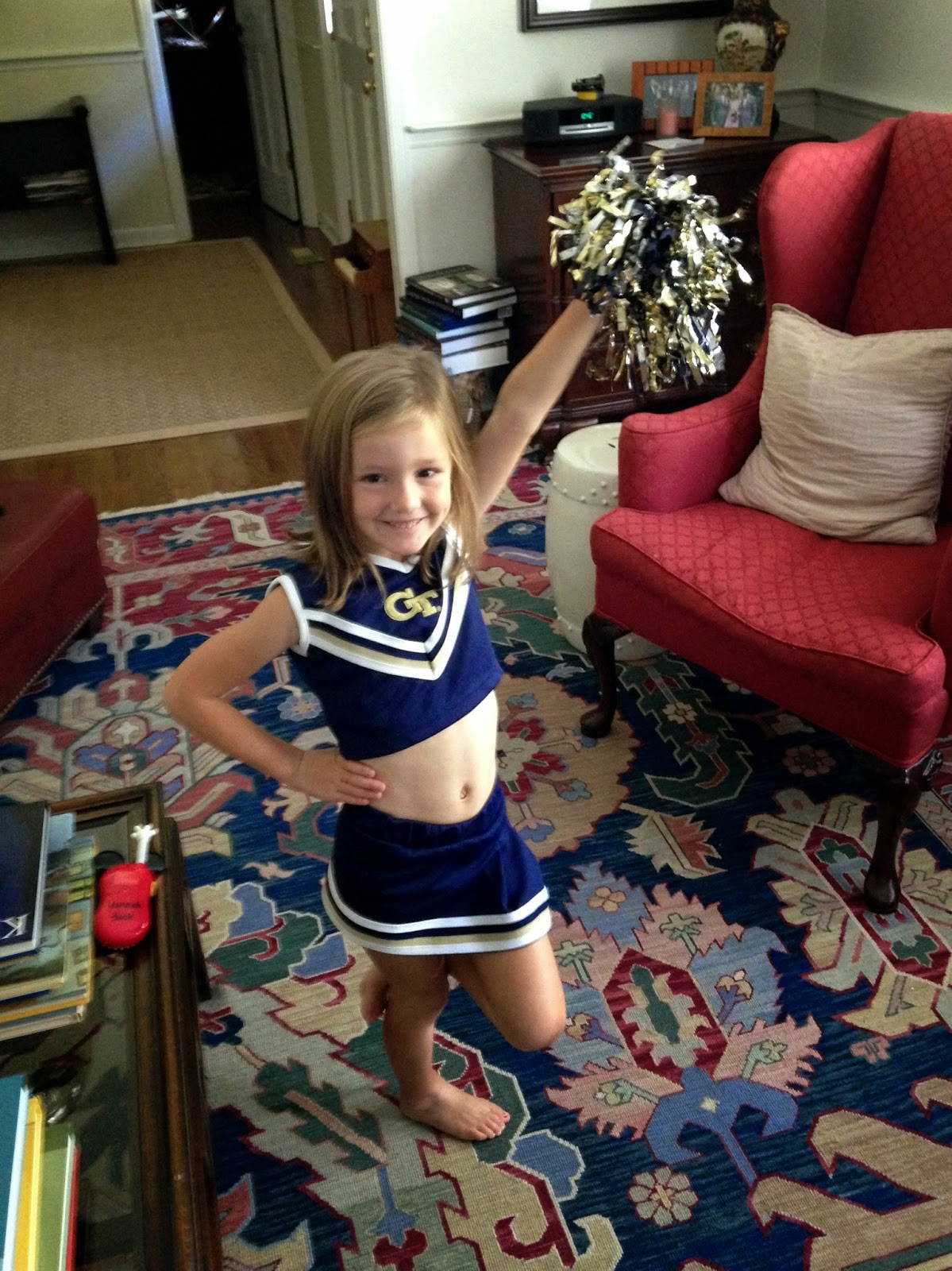 We cheered on the Yellow Jackets as they beat Virginia Tech. Hannah wore her size 2 cheerleading outfit (a little small, but fine for home) and danced and cheered all over the house. 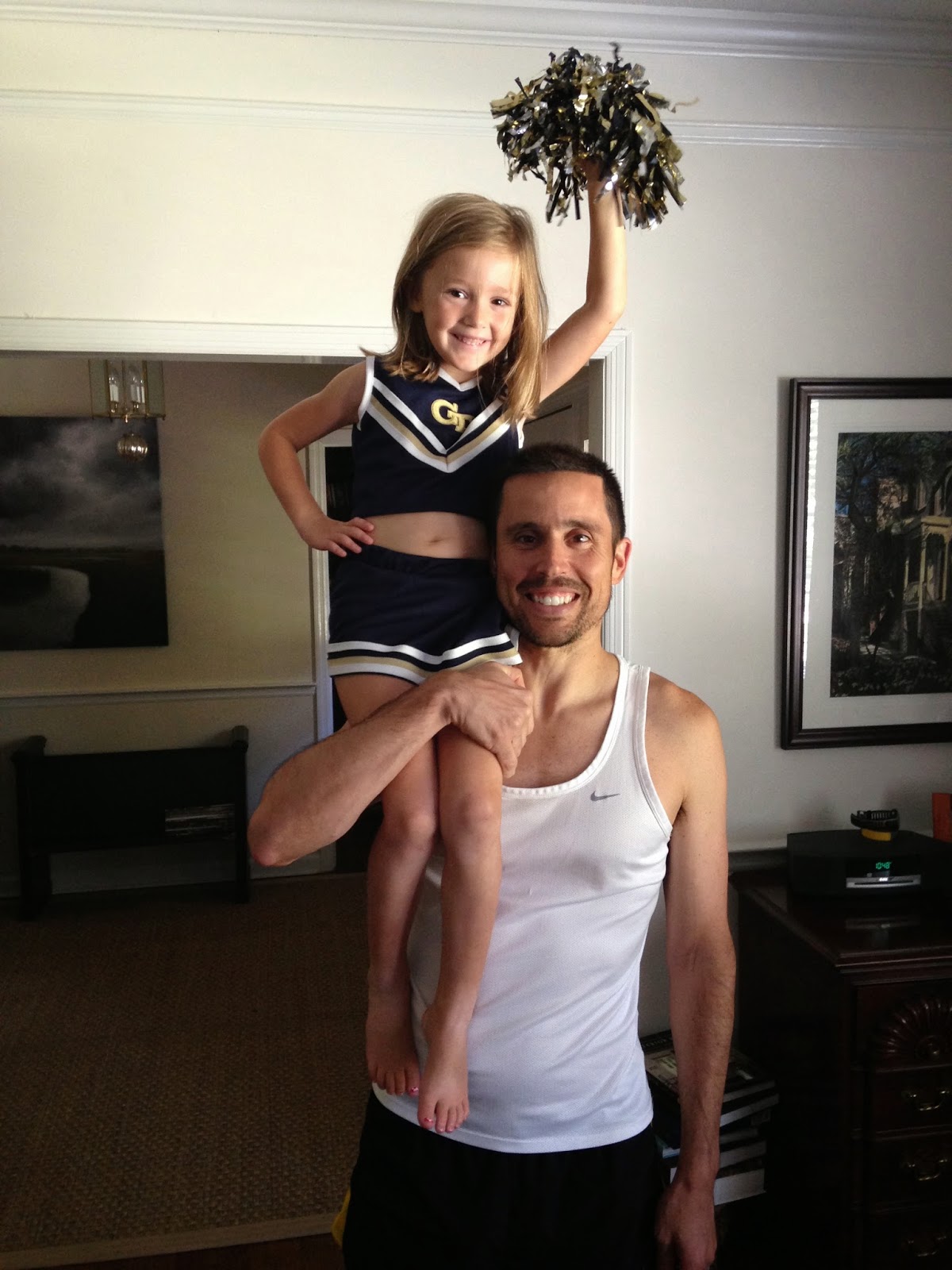 We watched the game on TV. Yes, watched on TV. As in, not streamed on the computer or followed GameCast via the ESPN app. We have TV again.

I thought I might write about our decision to get rid of TV but I never did. Together, Joe and I decided in February to get rid of TV for six months. It cost a lot of money and we weren’t watching much of it. So we did it and, honestly, it wasn’t that hard. We missed watching things like the Masters, the World Cup, and the Tour de France, but otherwise we were ok. I was more ok than Joe.

It would’ve been nice to have easy access to the DVR and record shows for the kids. But we have DVDs and were fine. We read news on our phones and via email and really didn’t feel like we missed out on much. Joe and I watched a few series on DVDs (like the Pacific and Duck Dynasty episodes) and movies we hadn’t seen in a while. I should also add that we have Netflix and occasionally watched TV shows through that. We saved some money and even contemplated not turning it back on. 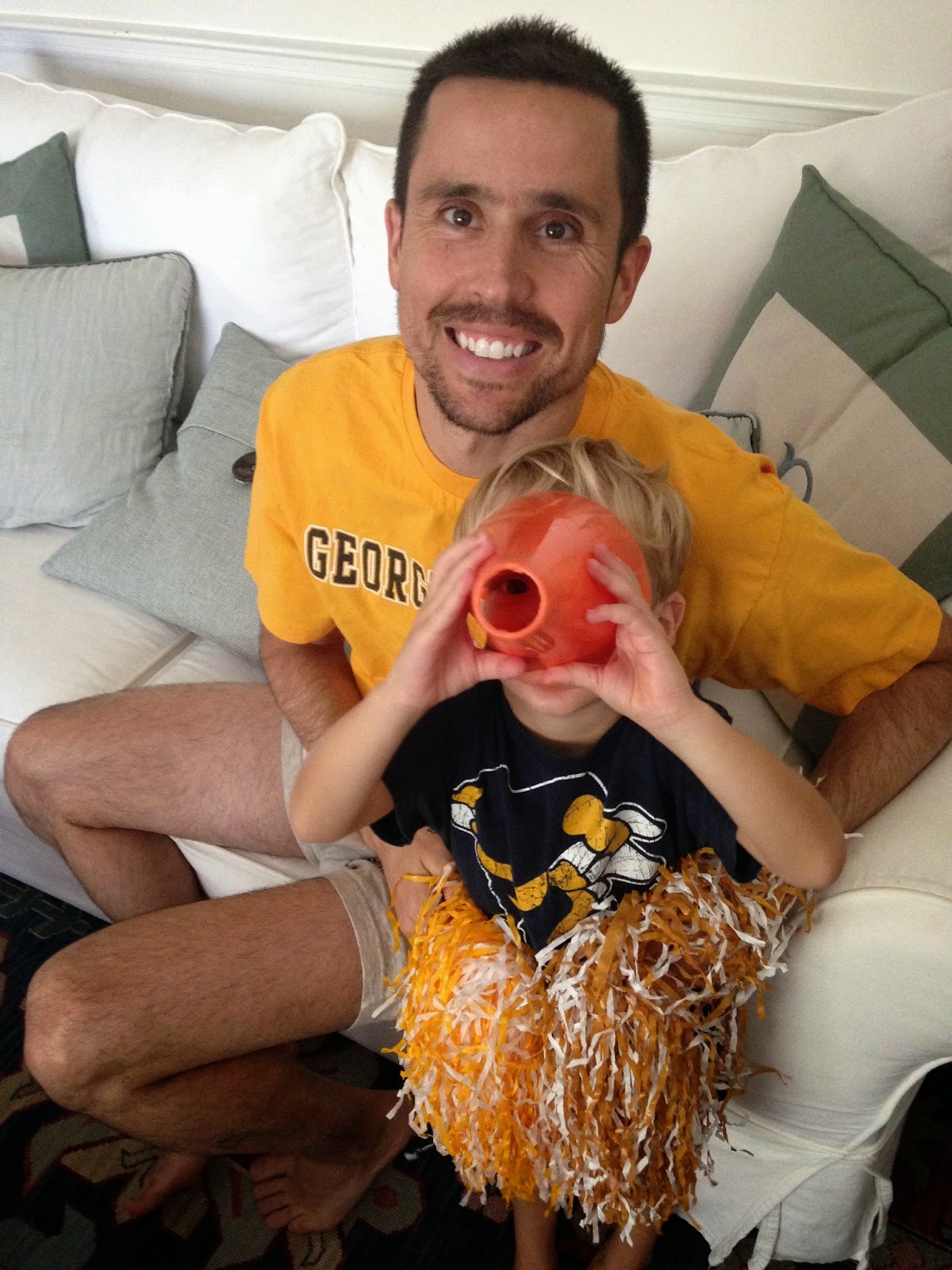 But it’s football season. And we are BIG football fans. And we love ESPN’s GameDay. 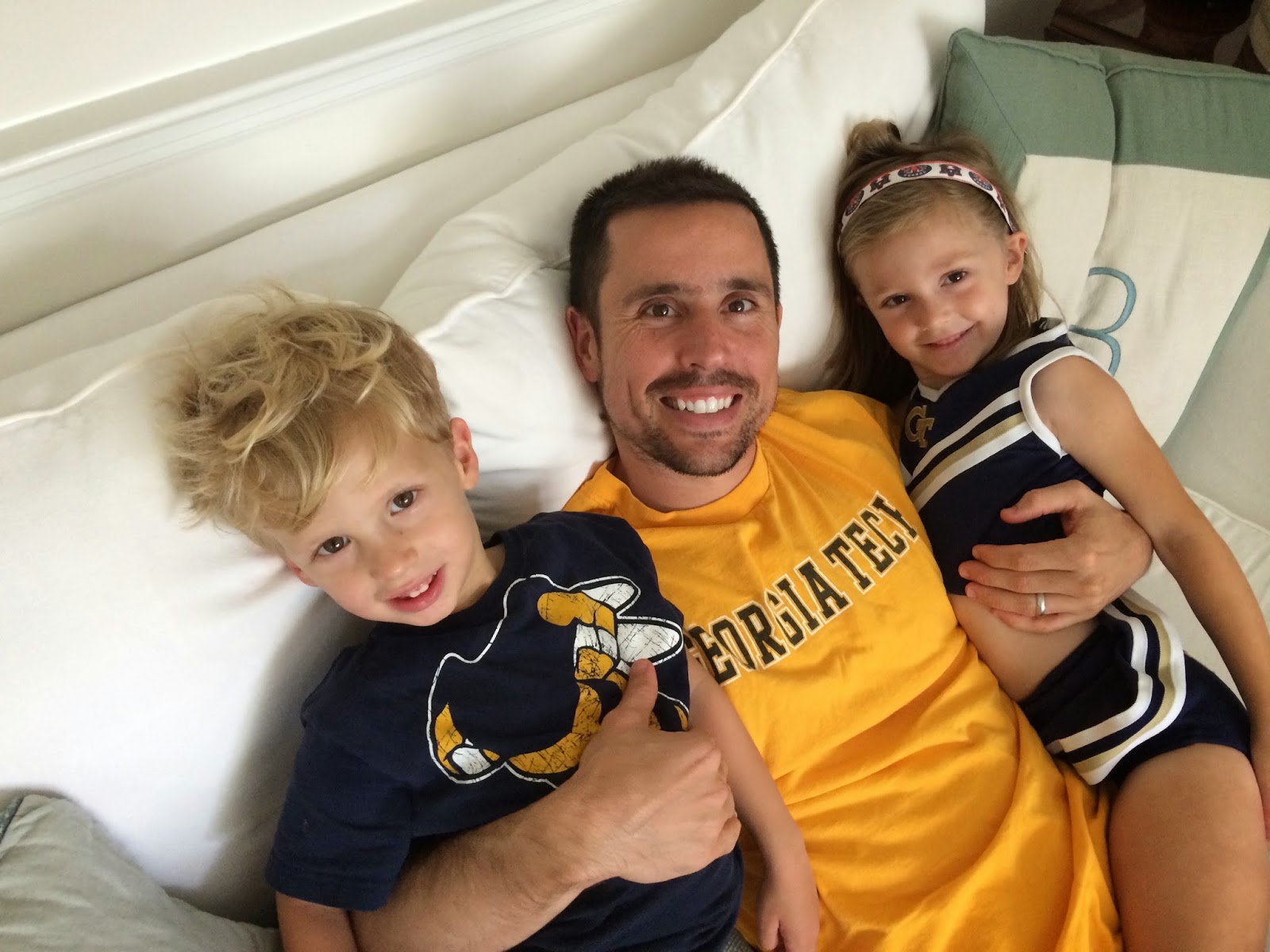 …And this season is looking good for Georgia Tech and Auburn. We cheered them on to victory this past Saturday night, too. What great games those were!

So we have TV again – through a different provider and at a better price tag – and I think everyone is happy about the convenience and luxury.

On the subject of football, we went to a local game at the private school and the kids were introduced to playing on the field during half time. Man, they had a good time – Joseph running around throwing himself on the ground like little boys do, and Hannah also running around (mostly with the boys). I got one picture of them standing still. 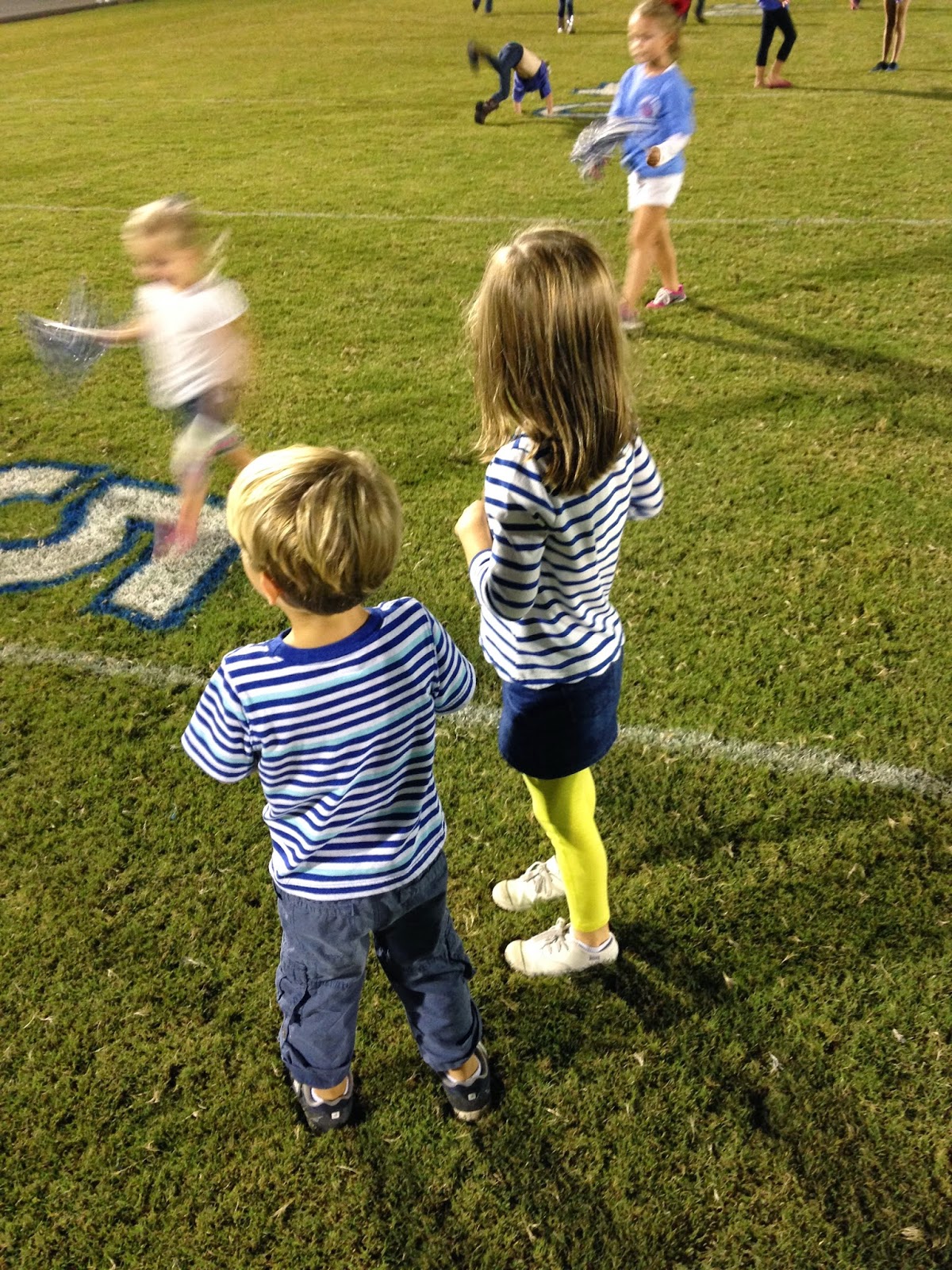 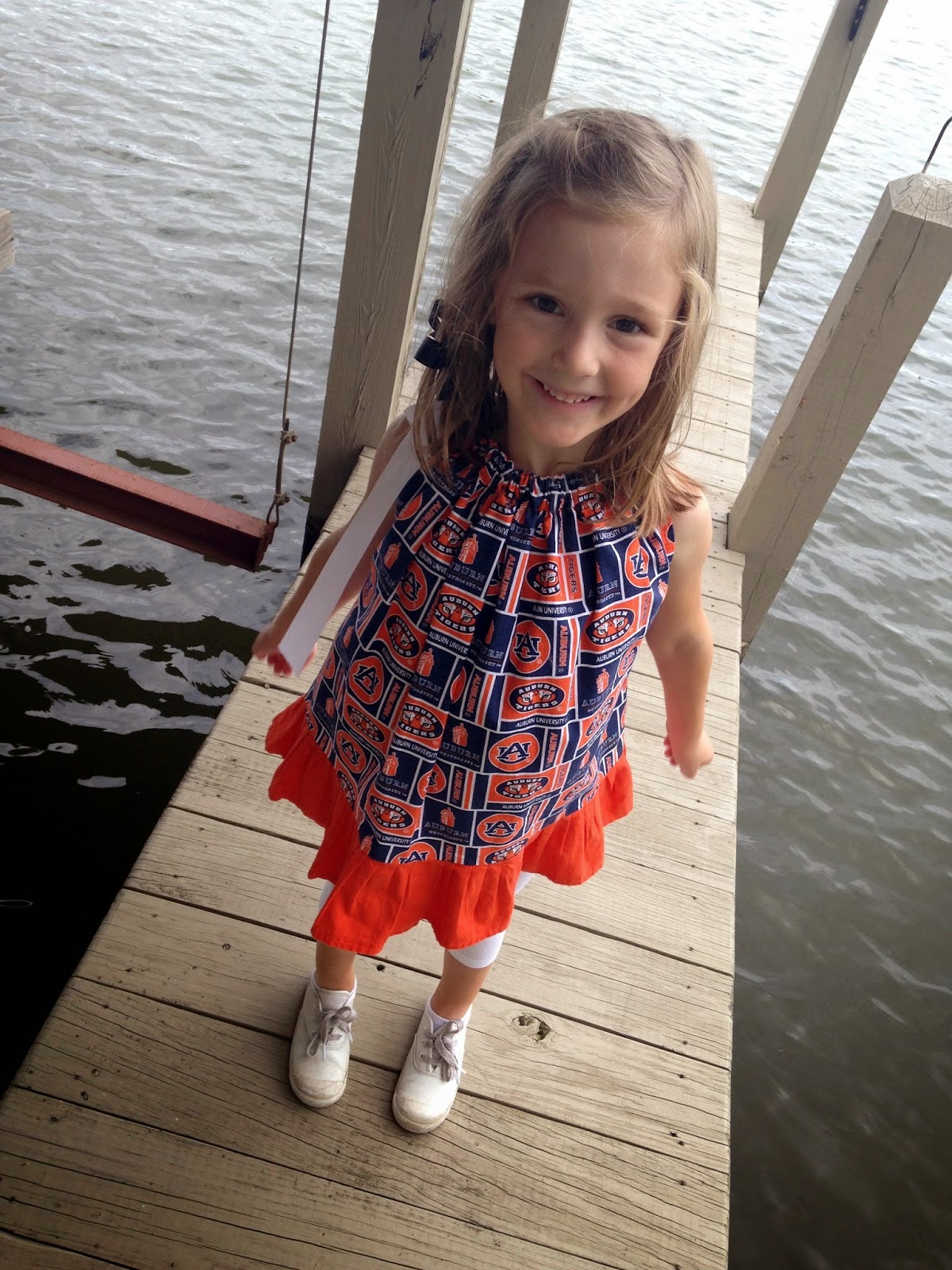 We grabbed pizza at Mellow Mushroom and spent a Saturday afternoon playing at Lake Sinclair with good friends. Hannah and Joseph with Sydney (another PK). 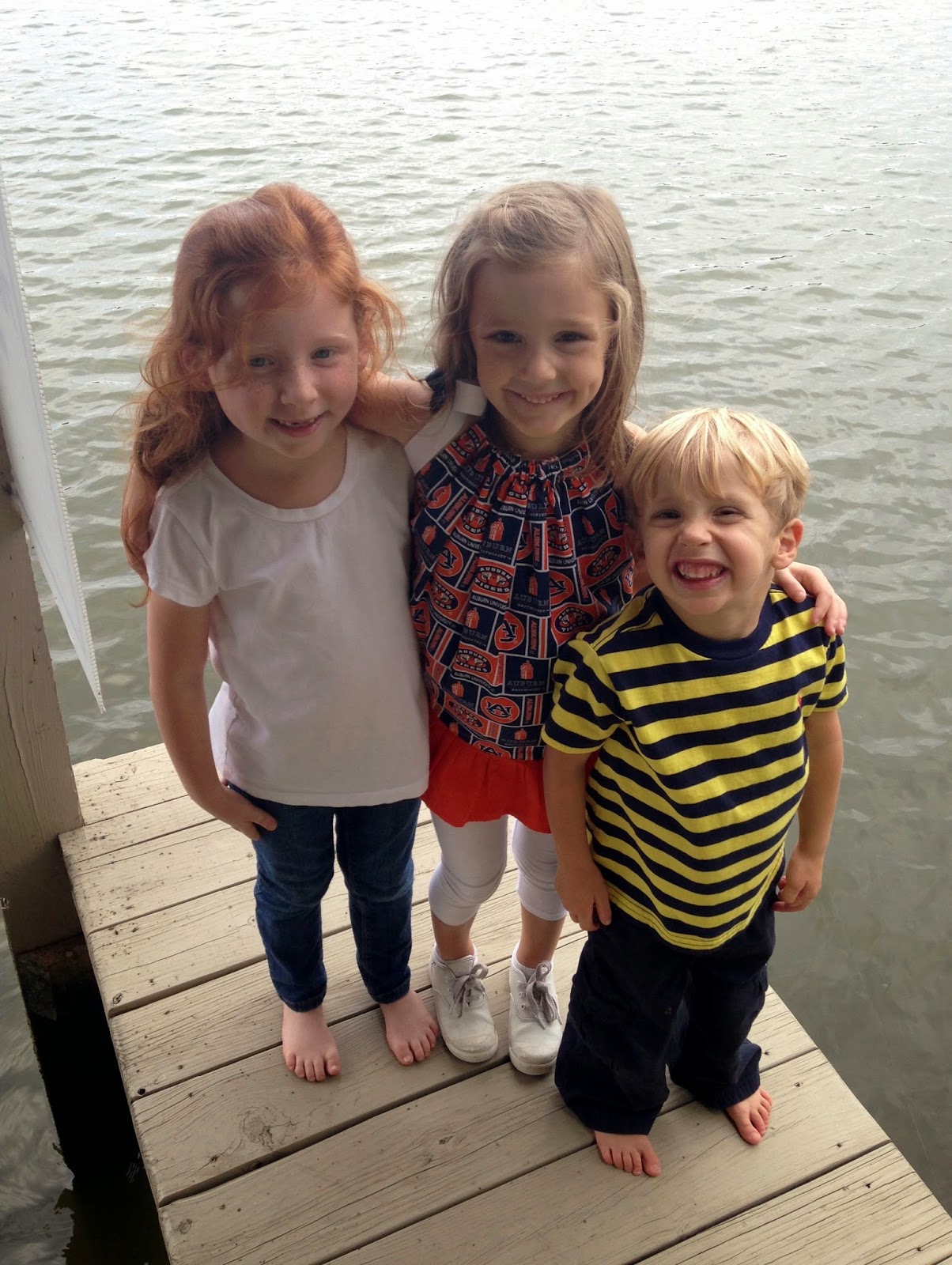 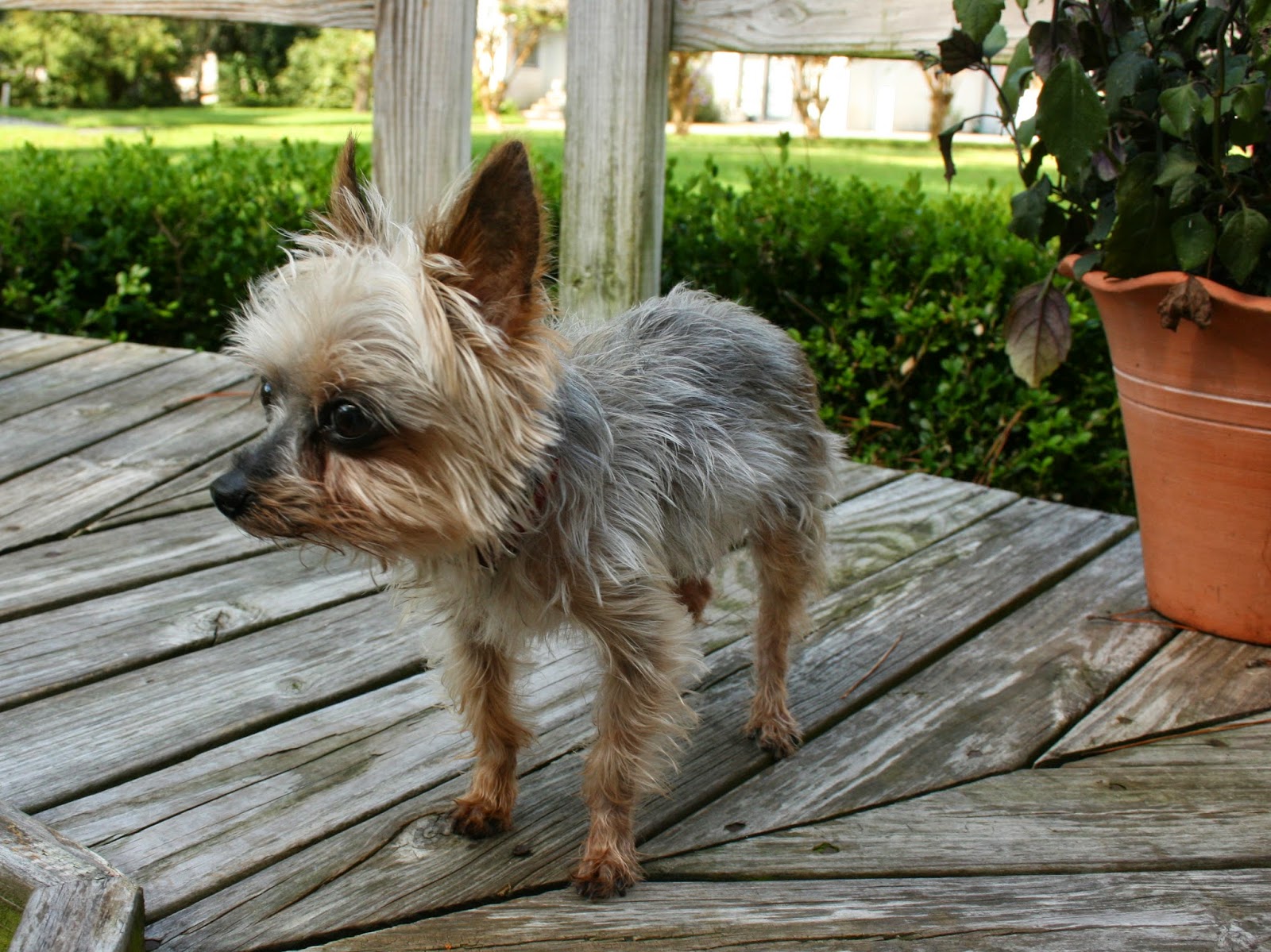 That really is his official title. {If you don’t own any Spenser books, you must! My mom is the author and the proceeds help feed hungry children.} Spenser just celebrated his century! We watched him with his birthday cupcake on FaceTime. Happy 15th birthday, Spensey! 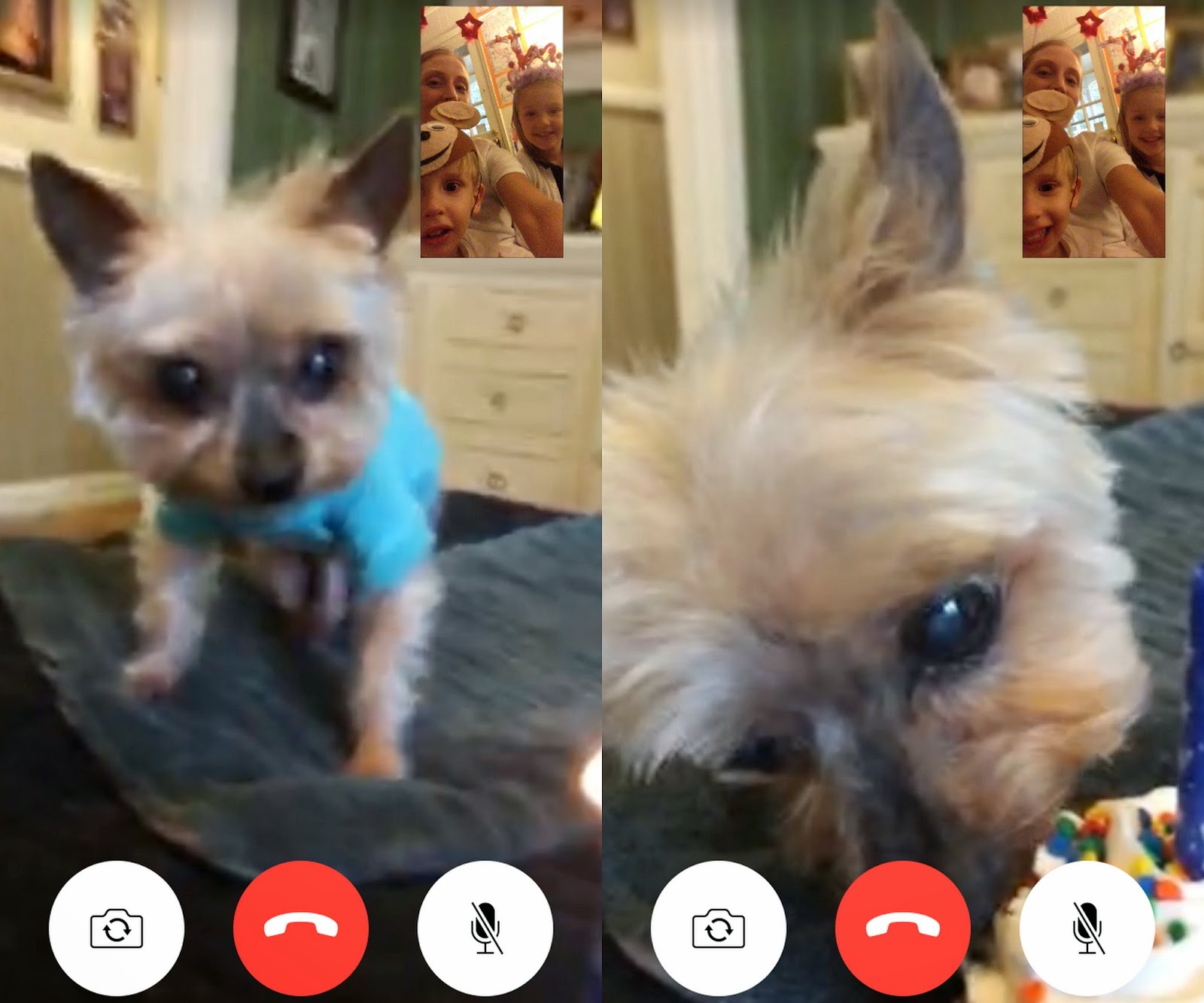 In other miscellaneous news, Joe and I attended Catalyst in Atlanta last week. Catalyst is a Christian leadership conference, and this year’s theme was “A Community of Change Makers”. {You can check out the website here.} 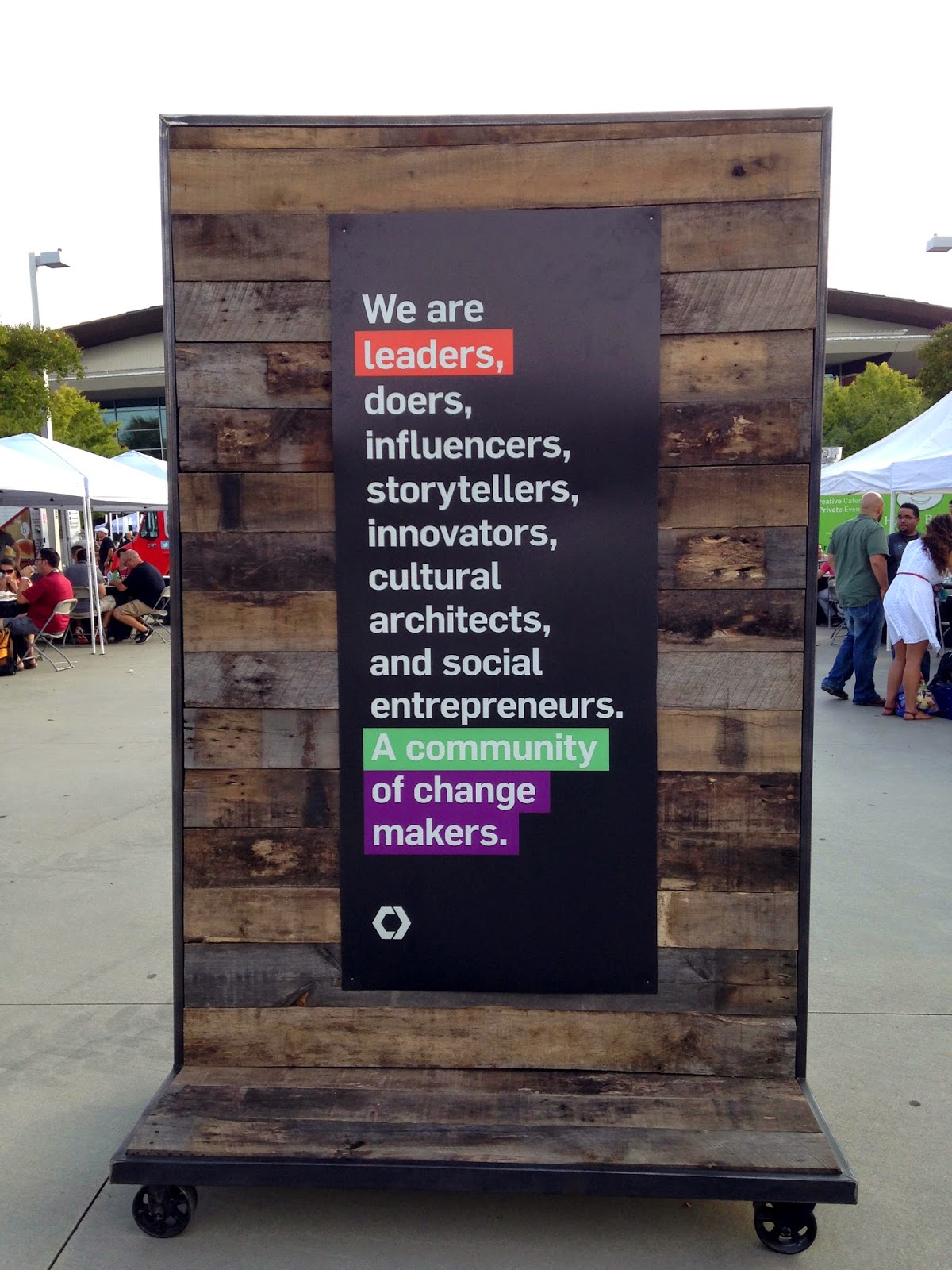 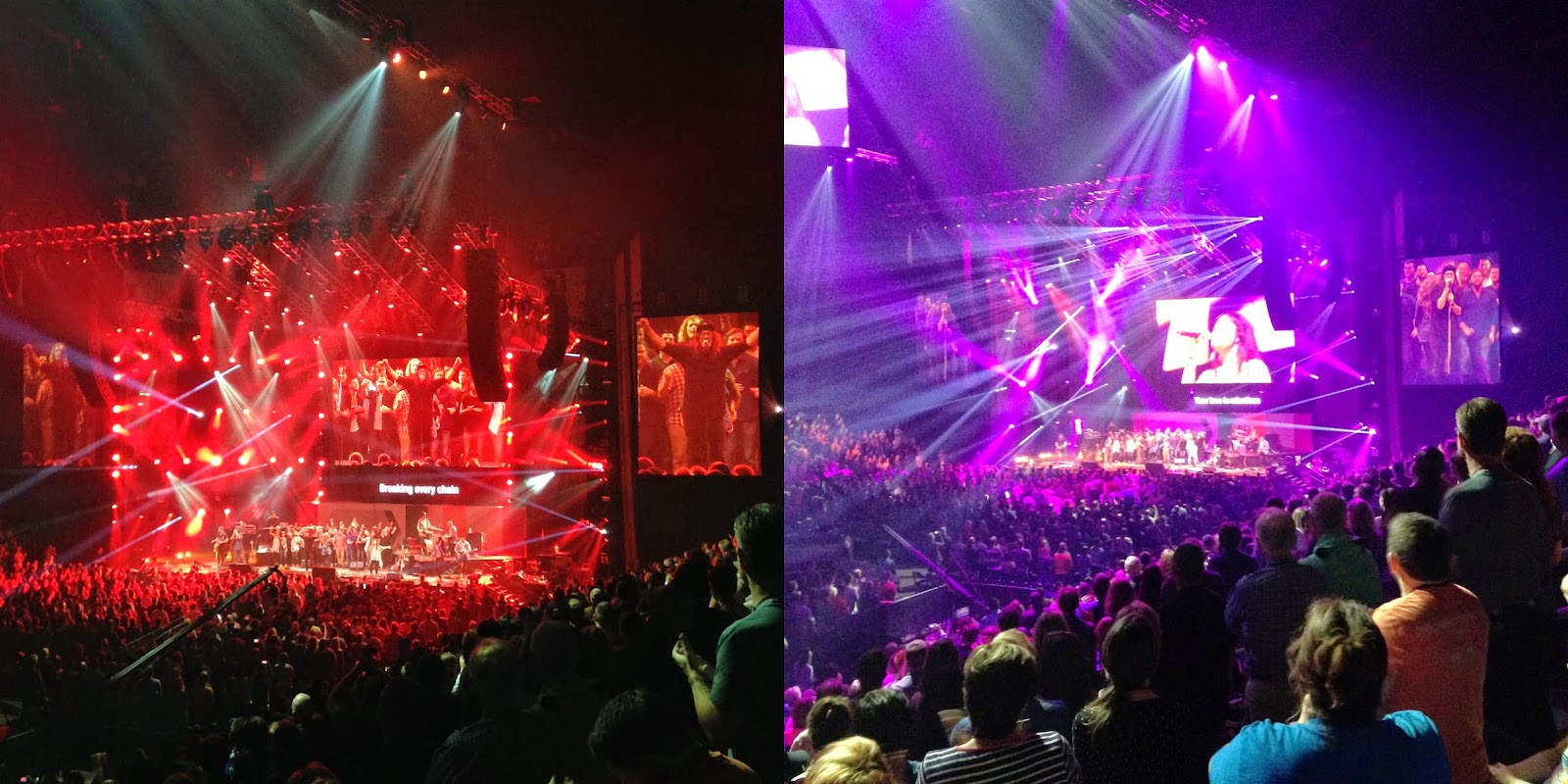 The speakers were great. Worship was incredible. Such an amazing, spirit-filled experience. The content provided at Catalyst has been described as “drinking from a water hose”.  I think that’s a pretty good metaphor. Good thing we took notes! A lot of information and thoughts to ponder.

I am so thankful to Meme for babysitting my little ones so I could go with Joe for the second year in a row. A huge blessing!