{one}
A couple weeks ago Joe installed the toddler rail on Hannah’s crib. 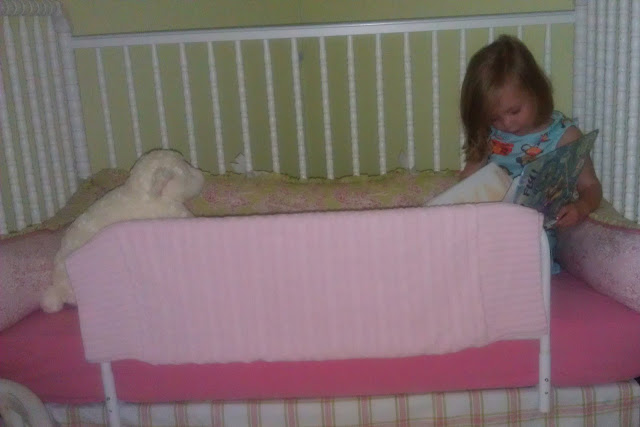 While she’s loved her crib and never been interested in climbing out, we decided that since she’s about to be 3, we’d start making the transition to a big-girl bed. Now we are having the typical problem of keeping her in it. She likes to set up a camp site behind her crib (it’s angled in the corner of the room). She grabs the iPod off the docking station where it’s playing her ocean sounds and uses it as a flashlight to look at her books. She’ll have her blanket, pillow, socks, maybe an extra change of clothes back there with her too. Usually, the first thing she does is turn off the switch by the door – the one that controls the fan (and the camera monitor). And she knows that by flipping that switch we can’t see her, so she can carry on doing whatever she pleases. She’s smart…and annoying. Nothing, and I mean nothing, can make her stay put. She’ll come find me/us and have to be taken back to her bed over and over and over again. This child wears. me. out. {Today, after I had to return her to her room several times, I checked the monitor to see her laying on her bed faking a snore.}

{two}
Two big trees came down in the front yard. Nothing compared to the some 15 pines at our last house, but noisy nonetheless. The workers showed up just after lunch to begin, with the sawing and large pieces of trunks falling to the ground precisely during naptime. As a bonus our TV got knocked out in the process.

{three}
I took the kids to play with friends at Lake Oconee. The playground and outdoor cafe at the Ritz at Reynolds Plantation makes for a very fun (if a little fancy) playdate. It was so fun seeing two of my favorite girlfriends, Babycakes and Sweet Pea, both expecting #2! 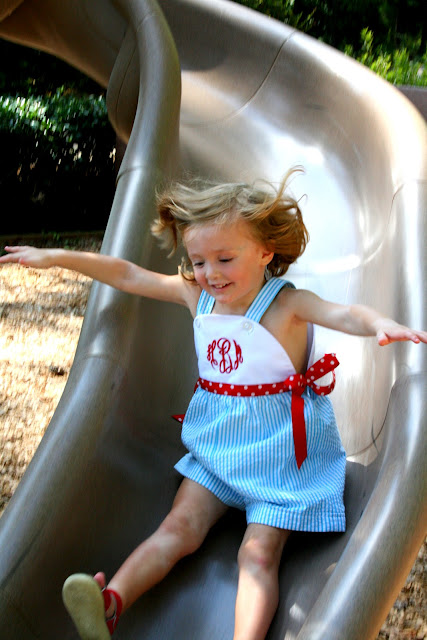 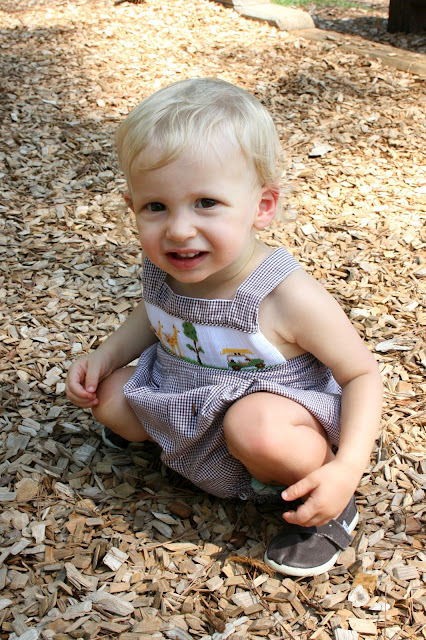 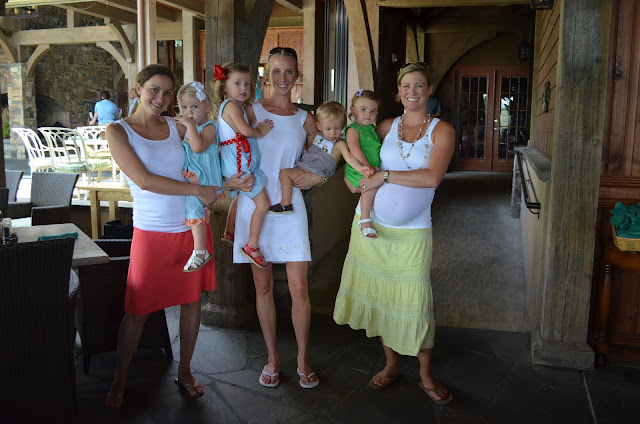 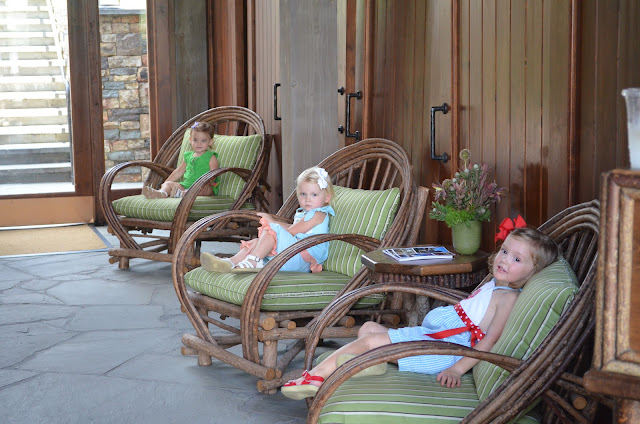 {four}
Hannah took swim lessons. Due to bad weather, 2 out of the 5 lessons were cancelled, but she had a good time at least.

{five}
I have become reacquainted with my sewing machine. My mission was to learn to operate a sewing machine and sew throw pillows while pregnant with Hannah. Mission accomplished…then forgotten about. I haven’t done anyting since and when I pulled the thing out of the box I had no idea where to start. It also took me a while to realize I was missing a part. A kind church member who lives around the corner offered to tutor me. I gratefully accepted and had my first lesson. No long dry spell this time I hope; I have big plans for that machine.

{six}
HVAC work was done at the house. I am very unimpressed with the services of the company that did the work: replacement of most of the duct system. This could be its own blog post, but here goes. They first showed up to work, not telling us exactly the scope of work or that it would take 4-5 days and we would be without AC. {One of the challenges of parsonage living is having everything go through a middle-man. With not having a typical contractor/homeowner relationship communication and arrangements can get jumbled.} We had them come back last week to complete the work while we were on vacation (duh). It was not, and while “finishing” on Monday something happened causing a freon leak. By Monday night we had a hot house. Thankfully, a repairman lives nearby and was able to fix it. I’m still not sure if everything is actually done. I do know there is still old duct work waiting to be picked up. Referral from me? I don’t think so.

{seven}
I have a new nephew! Lachlan was born on July 25 to my half-brother, Randy, and his wife, Suzi. We are so happy and excited for them. This baby was a loooooong time coming. Sad they are in California – I’d sure like to get my hands on him. 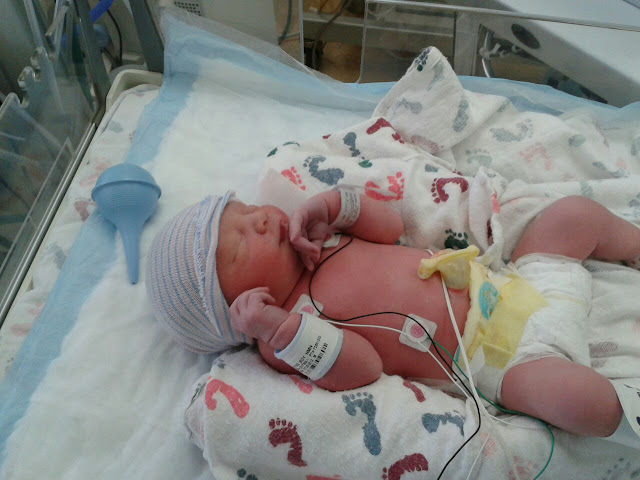 {eight}
My little brother is engaged! While in Carolina Beach for the family reunion he popped the question and she said yes. Actually she said “Uhh, yeah!” Joe took a video while I snapped a few pictures from the balcony. 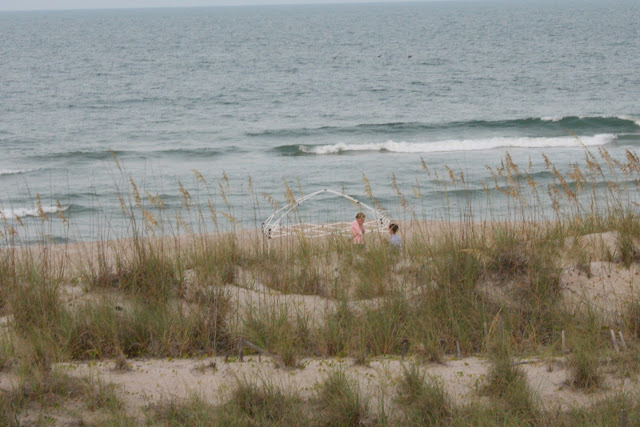 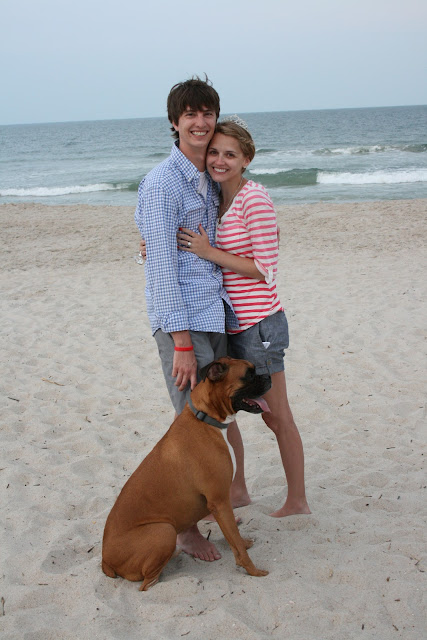 Congratulations Will and Crystal!

{nine}
Tuesday was Hannah’s first teeth cleaning at the dentist an hour away in Augusta. 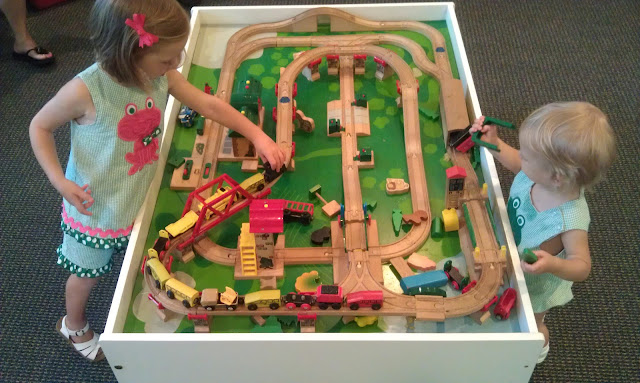 While the train set was fun, it did not go well. Despite her wanting to receive “princess sparkles” on her teeth, she was not a willing participant and liked the dentist’s part even less. Petrified is the right word. She was ok up until this point: 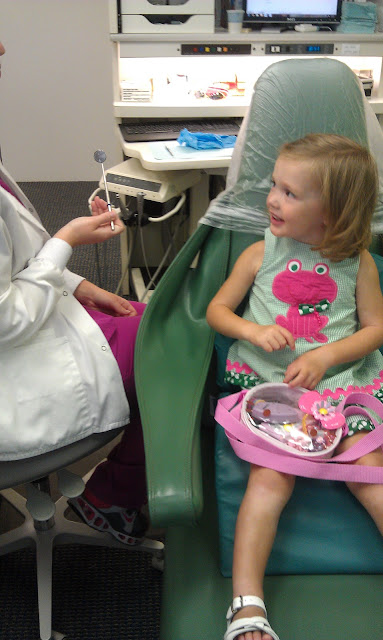 Later, we left Hello Kitty purse in Target, and had to go back in to find it. We did and Hannah could get back to making calls on her phone. Just leaving town to head back home, she got sick in the car. Massive mess. Taking a carseat apart and washing everything is not idea of a good time.

{ten}
I’ve been having pain in my ear for over two months. It’s a dull ache that doesn’t go away. Sometimes it’s worse than others, but it hasn’t been so bad that I felt like spending half a day in the doctor’s office waiting to be seen (which I’ve already been seen for once in tandem with a respiratory infection). Finally, on the phone with the doctor last week about a prescription refill, I mentioned it. Thinking I had a eustachian tube problem because that’s where I felt the pain, he referred me to an ENT, which I visited yesterday. Turns out my ears are too clean. Really doc, too clean? Yes. Apparently, my canals do not have that glossy, protective coating, and are therefore susceptible to any irritation (or whatever). You might sense my skepticism. Did it really take a trip to a specialist to figure this out? He told me in so many words to ease off the Q-tips. Not use Q-tips?! Is he crazy? Not that I’m OCD about my ears, but I cannot stand the feeling of water or wax. I give Joe a hard time for having an overproduction of earwax and passing that trait onto our kids…and look who has the problems now. With instructions to sit on my hands for two weeks, not putting anything in my ears, and a prescription for drops, I was on my way. We’ll see.

{eleven}
Mollie is sick. We are pretty sure she has a stress ulcer. Not to gross you out with the details, let me just say it is really not fun to clean up. It’s less fun to see her so miserable. We can’t get her to eat and she is barely drinking. She was boarded while we were on vacation and a couple days later she went back to the clinic for a bath. Perhaps it was too stressful for her. The last two days have been rough. Hopefully she’s on the mend soon, and can resume her role protecting us from squirrels and being Hannah’s dress-up prop.

I’m stopping at eleven. That is not all, but it is all for now. It has been a busy few weeks. I get caught up in these long posts and remind myself that if I just blogged more often it wouldn’t take as long. Oh well.