Hi. There has been quite a bit going on around here… I’ll save the details and pictures for later, but tonight I wanted to ask for prayers for this guy. 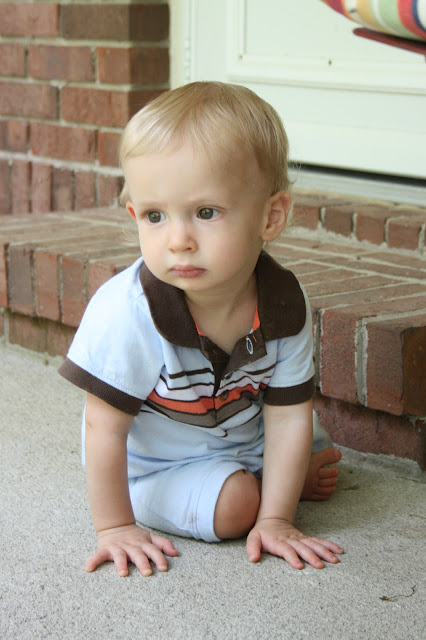 Tomorrow morning we are heading to Macon for Joseph’s appointment with a pediatric GI. We have been dealing with problems for 7 months now, with nothing really helping. A month ago, after an upsetting one-year appointment when we discovered Joseph wasn’t gaining weight, Joe and I decided that it was time to get some answers. He has dealt with bouts of excruciating pain causing him to contort his body and scream in agony as he apparently attempted to digest/expel food. Even though that was not fun for any of us, we thought it was temporary and was something he would outgrow. These episodes were not consistent, lasting anywhere from a couple of days to a couple of weeks. We have been treating it as chronic constipation, but that has not given him the relief we hoped for. We had blood work done a few weeks ago to rule out some serious conditions, which was LOADS of fun…taking blood from a one year old can take years off your life. {We were very thankful for Lynn Miller and the excellent job she did helping us with that.} The lab work all came back with negative/good results ruling out things like thyroid and liver problems as well Celiac disease. He is borderline anemic but we are not surprised given his food intake. Hopefully our starting Polyvisol will correct that problem.

Next, we were told it may be lactose intolerance. {FYI, lactose intolerance can manifest at 6 months while the enzyme needed to break down milk proteins cease to be produced. This timeline works in our case.} We made the switch to soy milk two weeks ago to see if it was a lactose problem, but we are unsure still if it’s helping. The last few days have been much better – meaning he’s actually eating and drinking his milk/Pediasure. He’s also not having (seemingly) as much pain when he has BMs. {They are still frequent, and he tightens up like he’s in pain, but not crying as much.} From what we can tell, he has not really gained weight nor lost any. We really are not sure what we are dealing with. Obviously this could be something that he’ll outgrow, but we are also concerned it might be something more serious. Joe and I are ready to get some answers. Hopefully tomorrow will be the start of that.

We are thankful to our friends and family who have been checking on Joseph, calling and texting us, and praying for him. I know I have blog readers who I consider prayer warriors, so I thought it was time to post about the situation. We ask for your prayers for us tomorrow, for our doctors, for discernment (and patience) for Joe and me, and most of all for relief for Joseph.