I am nesting like it’s nobody’s business. This week has been a bunch of crossing things off the to-do list. Taxes – done! Financial files – organized. Huge pile of mail – gone through. Work space – cleaned off (well, that’s stretching it, but I’m getting close). Sofa slipcovers – bleached, cleaned, and put back on. Laundry – well, you know that’s a work in progress, but I am doing a load a day so that nothing stays in the hampers for more than 24 hours. Ironing – check. OHC (Operation Hungry Child) tasks – completed.

Tuesday, our house-cleaning lady came and put in a good four hours. {I realize I might sound spoiled here, so let me explain. She is way affordable. She charges $10/hour and will work for however long I need her to. She usually is here three hours, every three weeks. 30 bucks! I just can’t argue with that. I could never get that amount of work done in three hours. Or three days. And try finding someone that cheap these days. It’s impossible. I know, I got quotes.} I took Chloe to the vet to have her yearly appointment (like five months late). She was groomed this past weekend. Tomorrow, Mollie will be groomed.

I’m making phone calls, going through emails, and getting my affairs in order, so to speak. I realized when I had Hannah that the world did not stop rotating. I could still do some things, like wash a load of laundry, check email, play on Facebook, and even run out to the store when I needed to. But that being said, it’s still nice to have as much done as possible before our life turns busier.

It is very likely that our bedroom wall will not be repaired before the baby gets here. A 2010 photo book will not be finished and ordered. And the closets will not have been organized. But that’s ok. I’m trying to be realistic here – something my husband says I’m not very good at, especially when it comes to house work and projects.

Switching gears. How about this face? 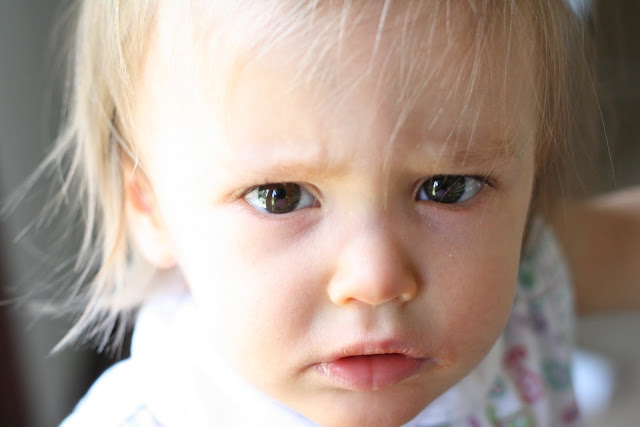 This has just started. She doesn’t like something we say or do to her, she lets us know it. The other day I was mad at her and gave her “the look”. She gave it back to me. I could not hide the surprised smile on my face, to which she responded with her own. I started laughing and then she broke into a loud cackle. Really…I’m going to have work on that.

I think Hannah has to know something’s up. Maybe she doesn’t understand quite what’s going to happen in the next several days, but she knows something. Because my patience has been tested these last couple weeks quite a bit. I don’t know if I am passing that test. I have lost my cool a few times to say the least. She has been whiny and clingy and very in need of attention (like 100% of my attention – not holding her while doing something else, or being next to her and on the phone). She’s doing things she knows is a no and doing them often.

Ironically, though maybe this shouldn’t be surprising, Hannah chose this week to start having feeding battles with us. She has been eating primarily table food at night and generally it’s a combination of us feeding her harder to eat things and her picking up the rest. Well…let me tell you friends, the past couple of days she has refused to let us feed her after the first few bites. We let her try to do it herself and she ends up getting more food in her lap than in her mouth. Tonight she would fill the spoon and then throw her arm above her head (as in food everywhere). I knew this was coming, but the timing…really? After my patience has run out, I back away from the highchair. {This didn’t take long due to my patience supply being depleted from my Walgreens pharmacy experience earlier, where it took a third trip to get the right prescription filled and in my hands.} If she wants to eat, fine. If not, she’s going to bed hungry. Wow…I sound like somebody else I know. As Joe and I sit down to eat, she manages to sit in her chair and quietly feed herself/play with her food long enough for me to calm down. Really, it’s not that bad. Sometimes I just need a chance to back away and take deep breaths.

I am really looking forward to tomorrow. It’s Joe’s day off and we have fun plans on one of our last days as a family of three. No worries, pictures to follow.