We are back settled at home from a very full week split between Atlanta, Sandersville, and Tifton. A tour of Georgia somewhat.

Last weekend was a busy couple of days filled with family in town, recital stuff, and heading to Atlanta. I didn’t want to miss the opportunity to meet my new godson at a sip-n-see, so I packed up the kids and drove to Atlanta after going to early church and Sunday School.

Hannah went with me and got to play with big sister Catelin. Joseph went off with the boys to do boy things. 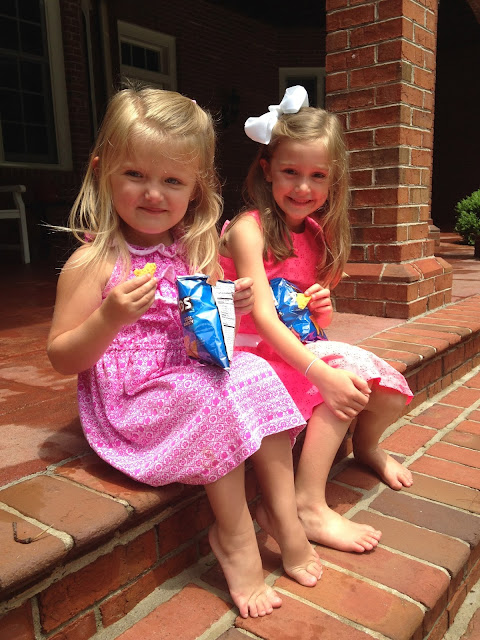 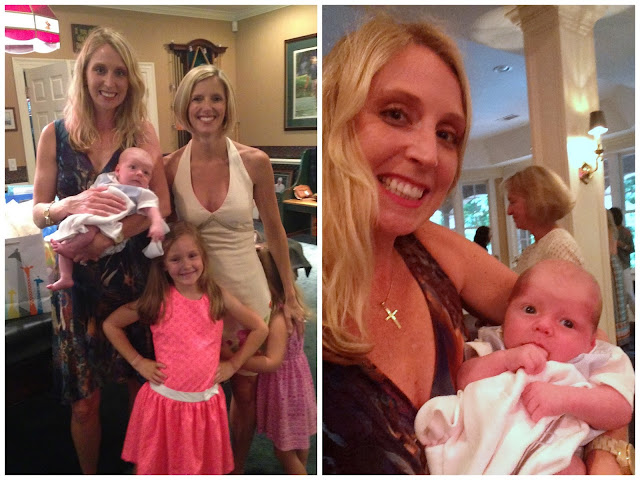 Isn’t Jake precious?! He is Julie’s fourth (yes, fourth!) child. Julie and I went to Georgia Tech together. {I’ve blogged about her before.} She was my big-sister in the sorority and we’ve been friends every since. Besides taking care of four adorable children, she also works part-time as a doctor and runs marathons. I’m not sure how she does it all but I’m proud of her and love her to death. She’s a true friend and sister-in-Christ. So glad I got to see her and hold that sweet baby boy!!

We spent the night with another special family who I love to pieces. Auntie Jen and Uncle Daniel made room for us and I was so grateful for the time to catch up, it had been too long. Hannah was very excited to have a sleepover with Leah. 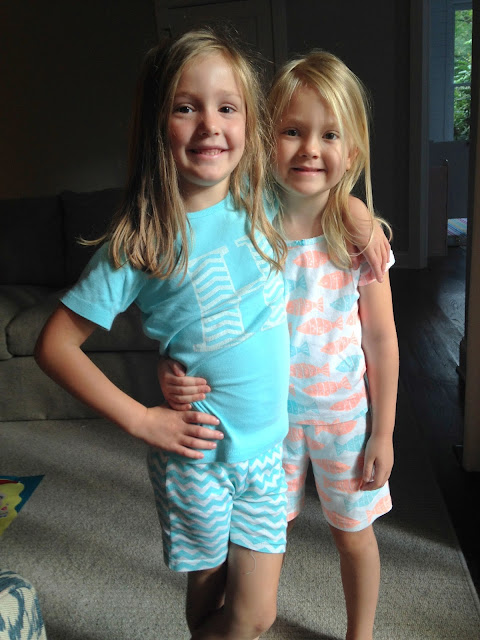 As little girls do, they stayed up way late, playing and talking.

On Monday morning we took the kids to the zoo. The weather was nice and, other than a little whining due to kids staying up too late, everyone had a fun time. Hannah was excited to see the pink flamingos but thought they were stinky… 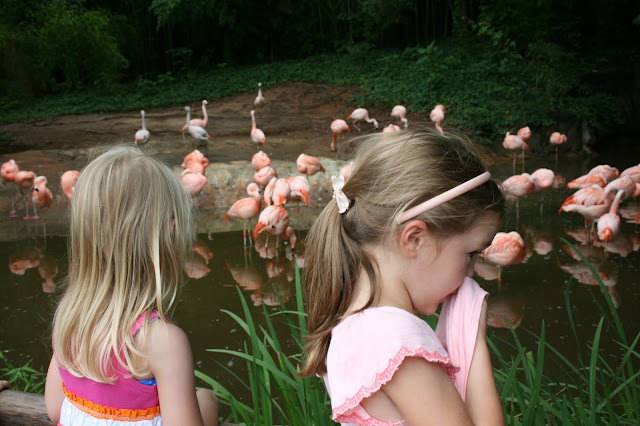 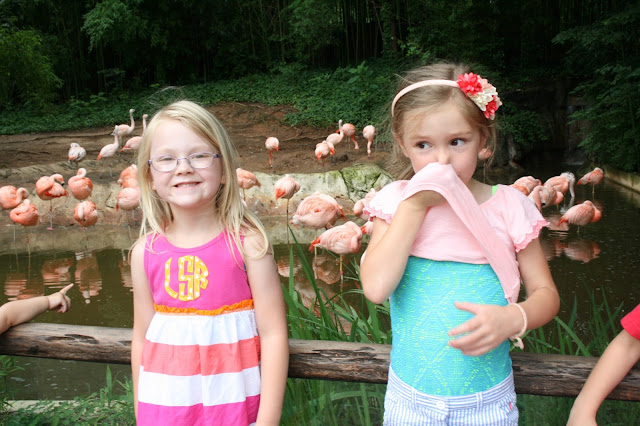 The meerkats were one of their favorites. They are cute little things and seem to have fun. 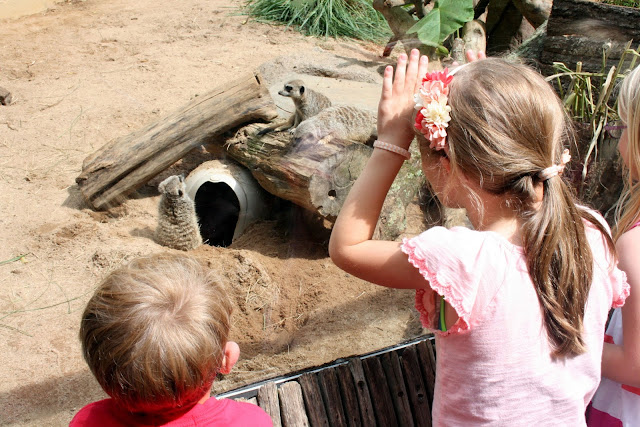 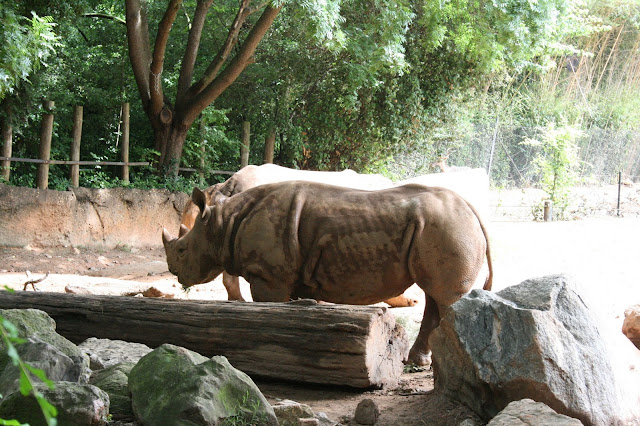 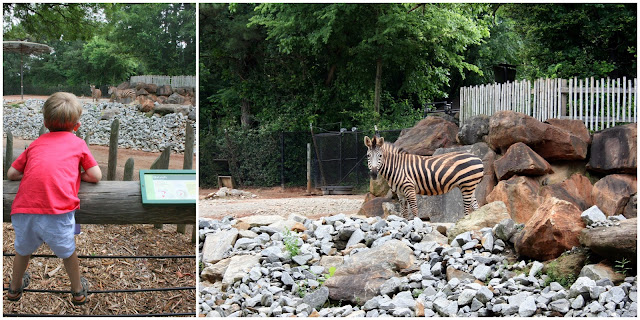 We were disappointed the giraffes were not on exhibit but we did get to see the zebras. And we said hi to Willie B. 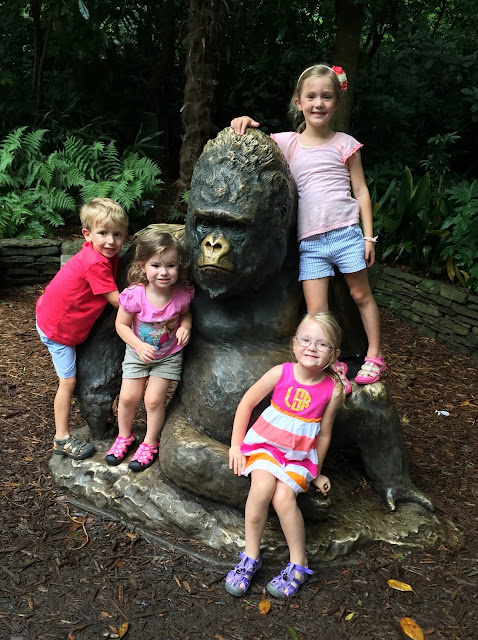 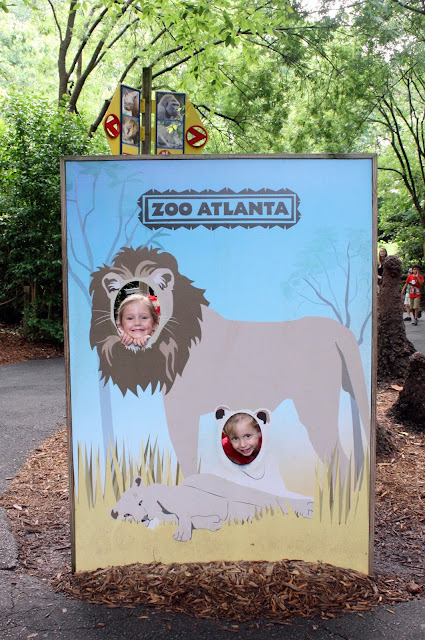 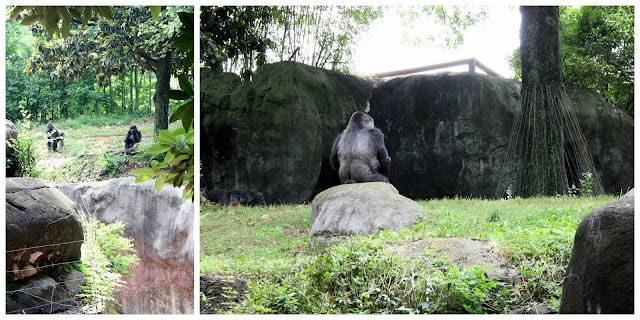 Joseph thought the gorillas were hilarious because you can see “their bottoms”. I don’t know…but he giggled a lot. I love how they just sit there, perched on the rocks like they are posing for pictures.

Hannah couldn’t wait to see the monkeys and was thrilled when one “looked” at her. 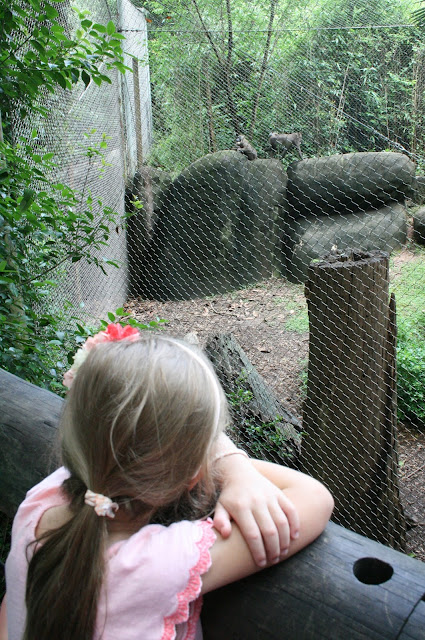 The otters were another favorite. Like the meerkats, they seem to have a great time and are fun to watch in action: 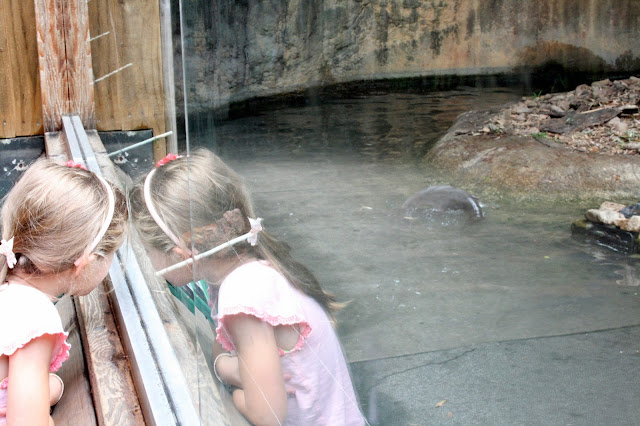 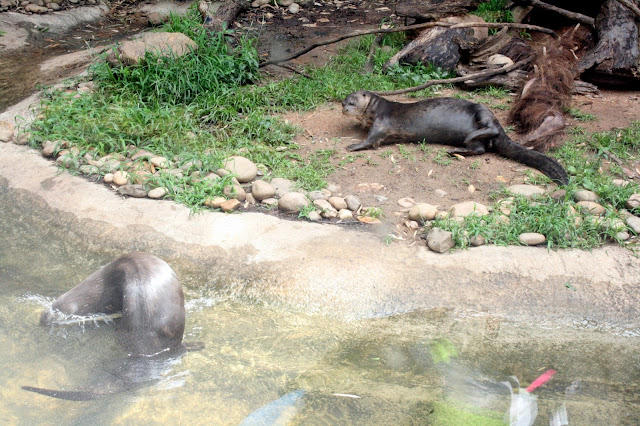 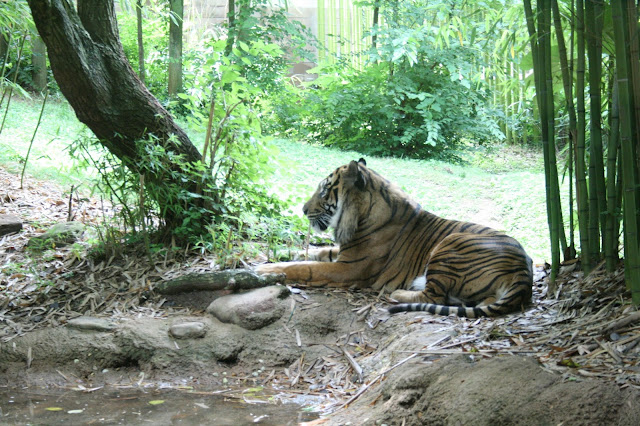 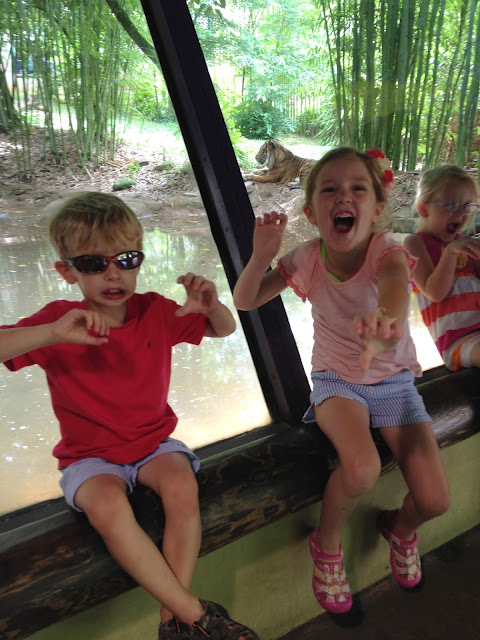 I love the tiger-roar picture. The tiger didn’t do anything impressive, but the kids were entertaining.

Before Jen and the girls had to leave, we took a ride together on the carousel. The three girls were excited and happy… 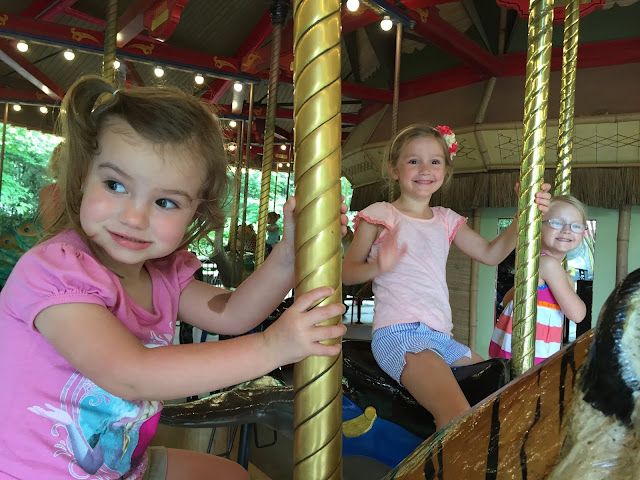 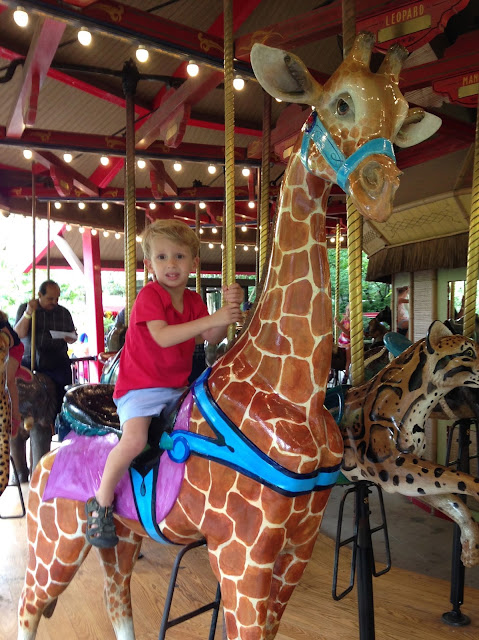 …Joseph not so much. He smiled briefly, but really just wanted me right beside him. The up and down, shaky movement was really not his deal. 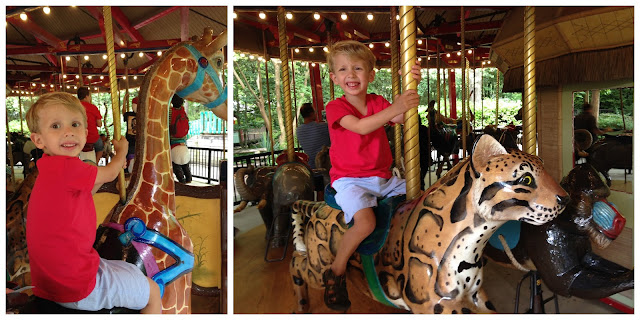 Hannah and Joseph then ran around and had a blast at the new splash pad just as the sun came out from its hiding place behind the clouds. 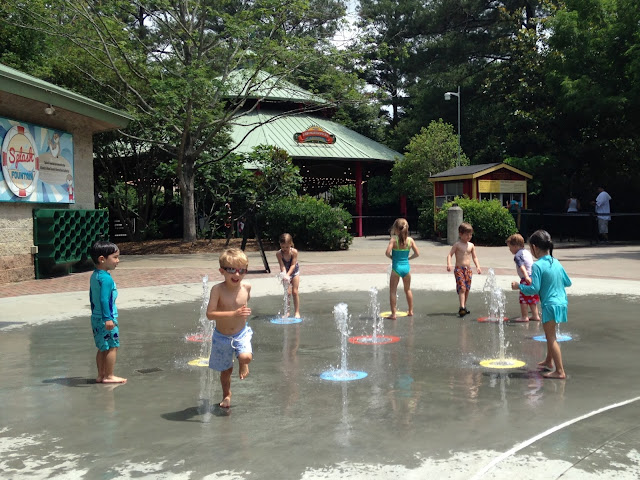 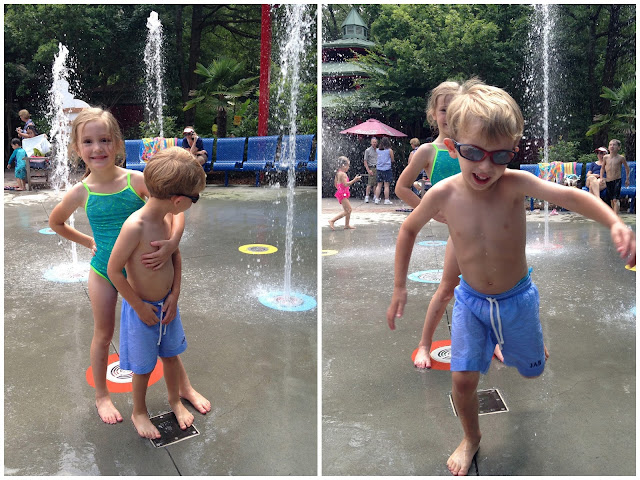 We visited the twin pandas (and impersonated one sleeping) and checked in on the elephant(s) again. 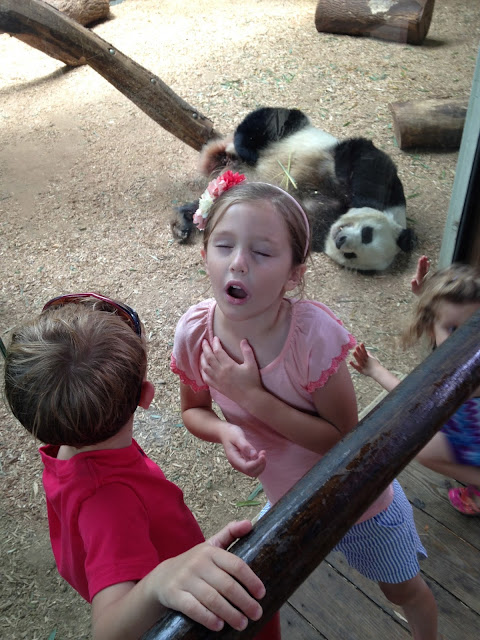 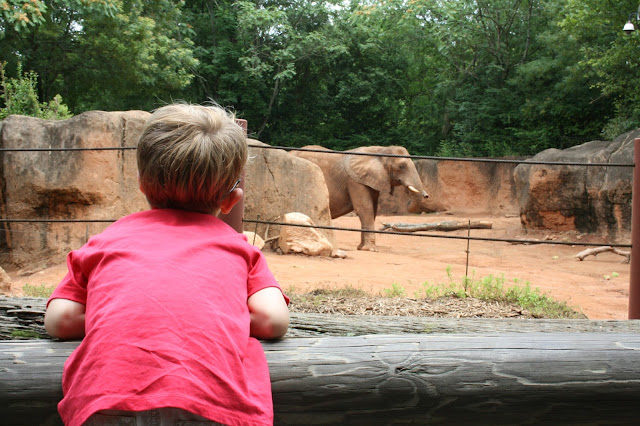 Instead of going straight back to Sandersville, we went back into the city for lunch and shoe shopping (for me!) at Atlantic Station. My highlight was having chicken and waffles for the first time, something I’ve always wanted to try but a little hesitant to do. We went to Chick-a-Biddy and it was delicious! The highlight for the kids might have been the escalators at DSW. {Small town living here, remember?} 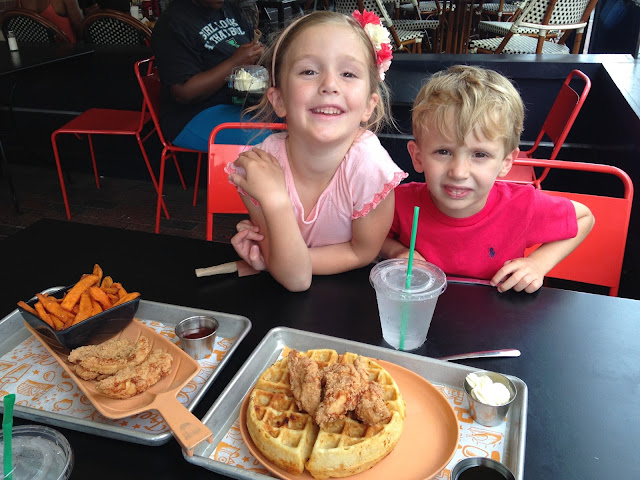 After a day at home, we drove down to be with Joe at the Methodist Church’s annual conference in Tifton. We ate, swam, and played at the hotel. The kids and me, that is. Joe worked mostly. 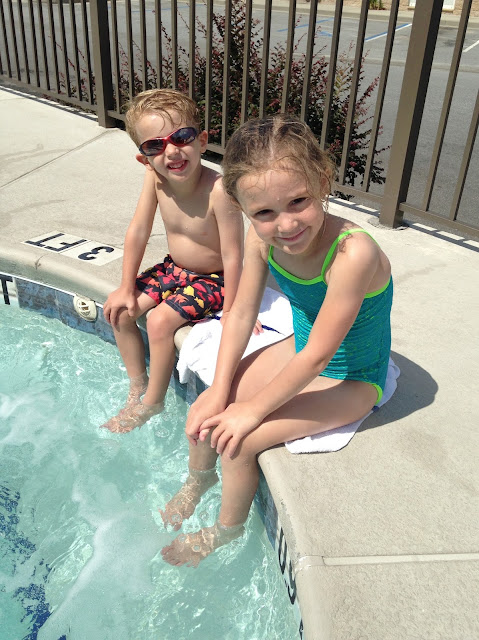 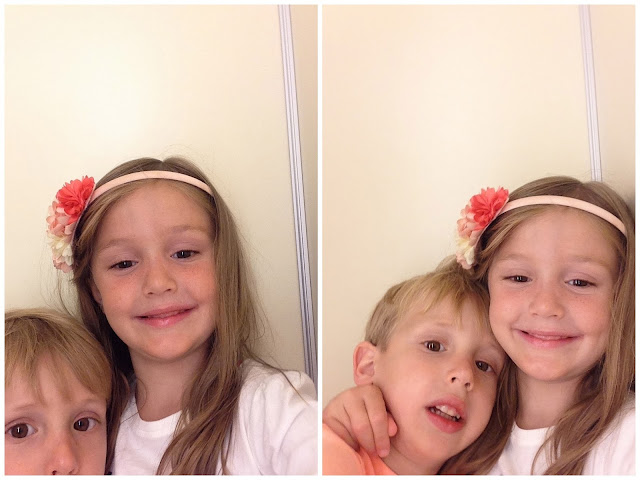 {…Those times when the kids get ahold of your phone and take pictures of themselves. They were in the corner of my dressing room at TJ Maxx. Can’t complain, they were occupying themselves quite well.}

It was a lot of time in the car, and late nights going to bed, but a fun week making fun memories.