Yesterday was an eventful day.

It was Hannah’s first soccer game and I had just gotten to the fields with the kids and put our stuff down on the bleachers. The coach had started pulling the team together when Hannah decided she needed to go to the bathroom (which was a good distance away from the field she was playing on). As she sauntered off, I hollered at her to run; the game was about to start. Joseph then said he was going to go with her. So they took off, and I followed behind. I grabbed my phone so I could call and let Joe know which field to go to but left the rest of our stuff on the bleachers.

As I was getting close to the building that houses the bathrooms, I heard a collision followed quickly by screaming. I didn’t know what had happened until two other moms ran around the corner and waved at me to hurry over. And then Joseph came around the corner, crying, blood pouring out of his head.

Let me stop there. The blood. Oh. my. goodness. Never have I seen so much blood in person. It was coming down his face onto his clothes and the ground. Thankfully one of the other moms ran into the bathroom and brought me paper towels, but the whole seen was chaotic and scary.

Joseph was wearing his sunglasses (which, as you know, is very common for him) and I don’t know if he was temporarily blinded when he rounded the corner into the shade or if he was not looking ahead or what…but he ran smack into a pole that was supporting the building’s overhang.

I quickly assessed if he was ok – he was, but not really. I knew we had to get to the hospital. I scooped him up and asked one of the moms to make sure Hannah (who was using the bathroom while all this was going on) got back to her field. I didn’t even know her – total trust there!

Thankful I had the phone in my hand still, I called Joe. He didn’t answer the first time. I was running with Joseph on my hip to grab my keys off the bleachers, frustrated and beginning to panic. Called Joe again. {Frantic is one way to describe the way I relayed the situation.} I fastened Joseph in his carseat and left for the ER, where Joe met us as I pulled in the parking lot.

Joe, always a calming presence in the midst of my panic (though I will say he wasn’t all that calm at first hearing me on the phone), hopped in the backseat – Hannah’s carseat actually – and we drove around the building. As we were getting out, we called our friend and surgeon, Rob. {He was the one that was so helpful in the days following Joe’s accident. It was also at his house where Joseph got the biggest goose egg I’ve ever seen when he tripped and fell at a holiday party.} I was hoping Rob would be able to do the sutures.

We got into a room at the ER, thankful that the bleeding had significantly slowed, when Rob texted and told us to go to his office. So I signed a form saying Joseph did not receive treatment (and hoping we wouldn’t be receiving an ER bill) and left. Joe carried him across the parking lot to the surgical office next door.

We waited outside for Rob and his nurse to arrive, but after that it all went by fast and easy. I mean really fast and easy. While we were waiting I texted a friend who’s daughter was also playing soccer and asked her to stand in for me. Hannah had been so excited about her first game. I also took this picture (face is mostly cleaned up!): 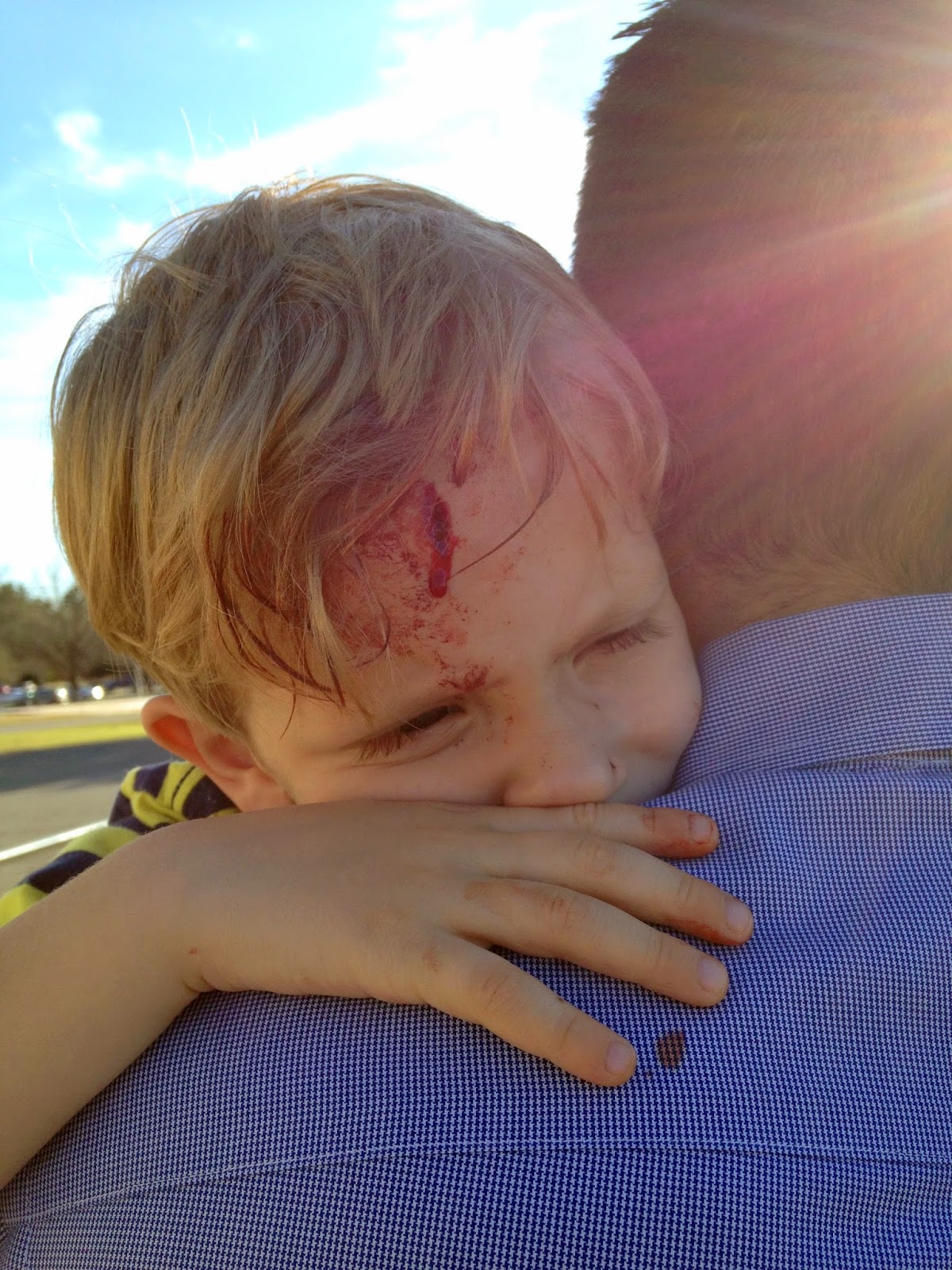 Once settled inside, Dr. Rob pulled up Joseph’s favorite show, Jake and the Neverland Pirates on his phone and gave it to Joseph. 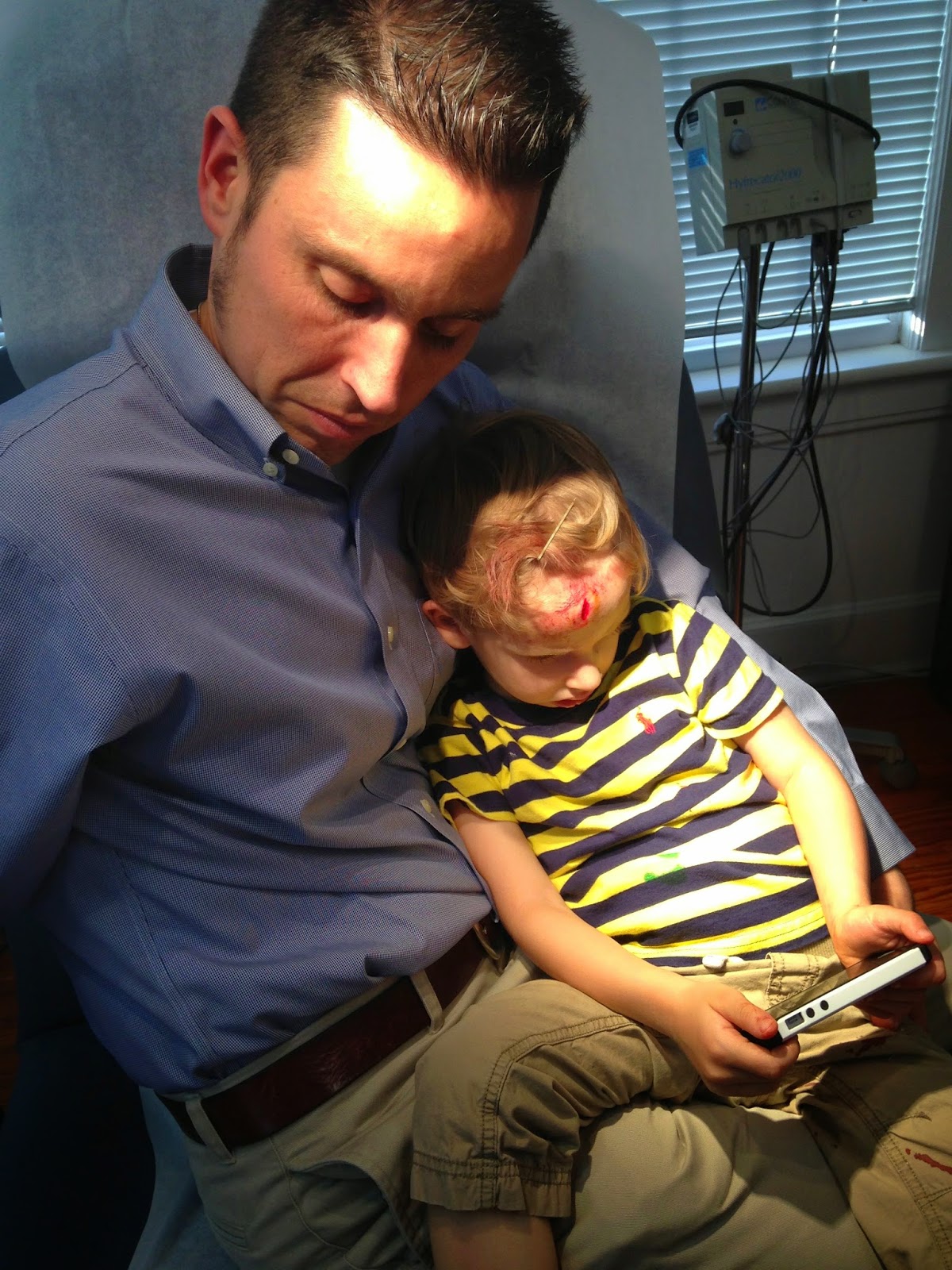 He sat right there on Daddy’s lap and remained calm and still. The whole time. He wanted to know what everything was, but didn’t cry or even move. Even when the needles went in. I don’t know if it was Jake or what, but one thing I know: my baby boy is brave. So brave. I made a comment about how it was good to know how tough he was. Joe said later that his pain tolerance might have something to do with the fact that he’s been in pain (GI-related issues) for years and could probably handle it. 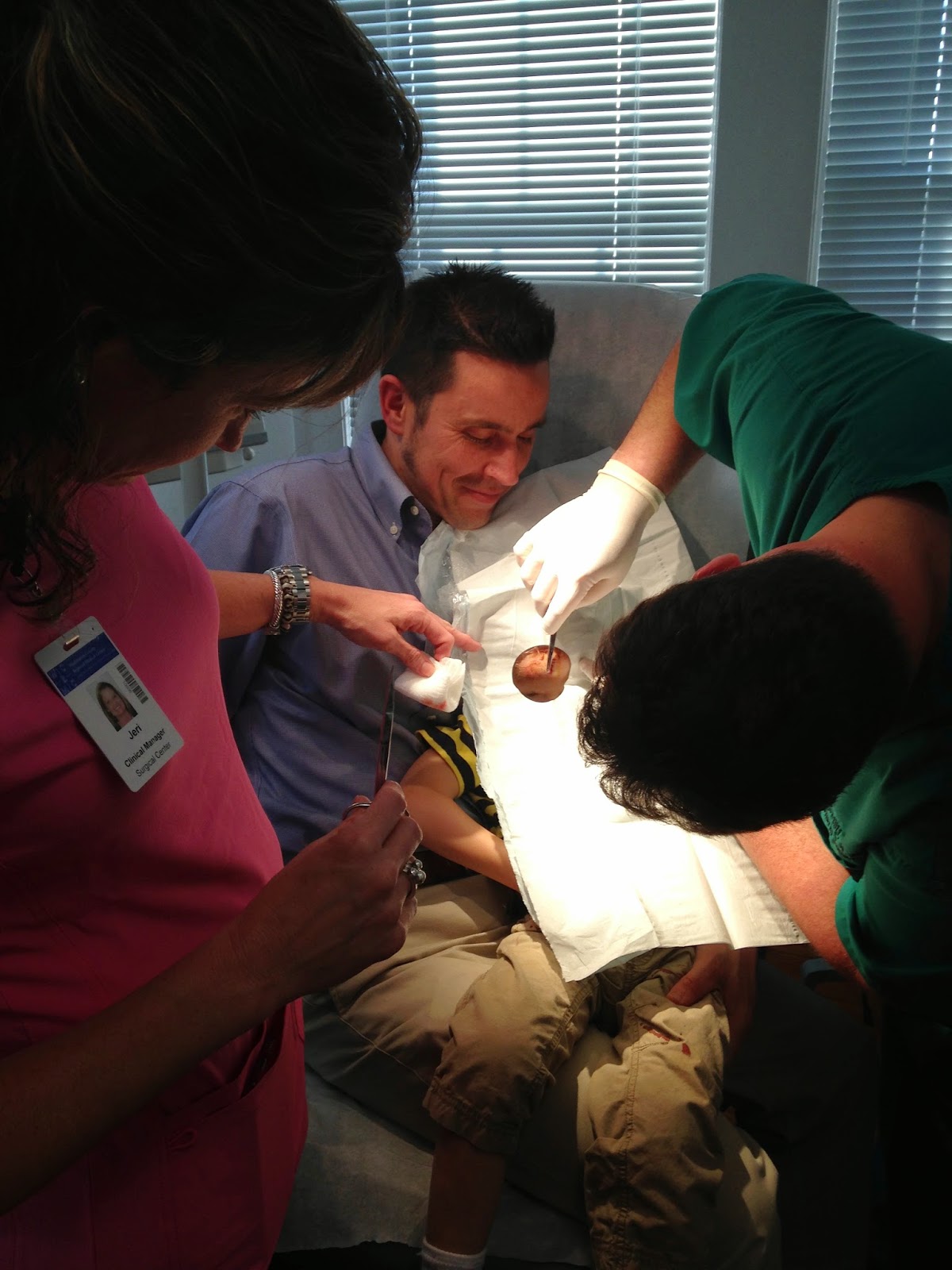 Dr. Rob did the sewing, and Joseph watched his show. It went great! Five stitches. His first and our first. 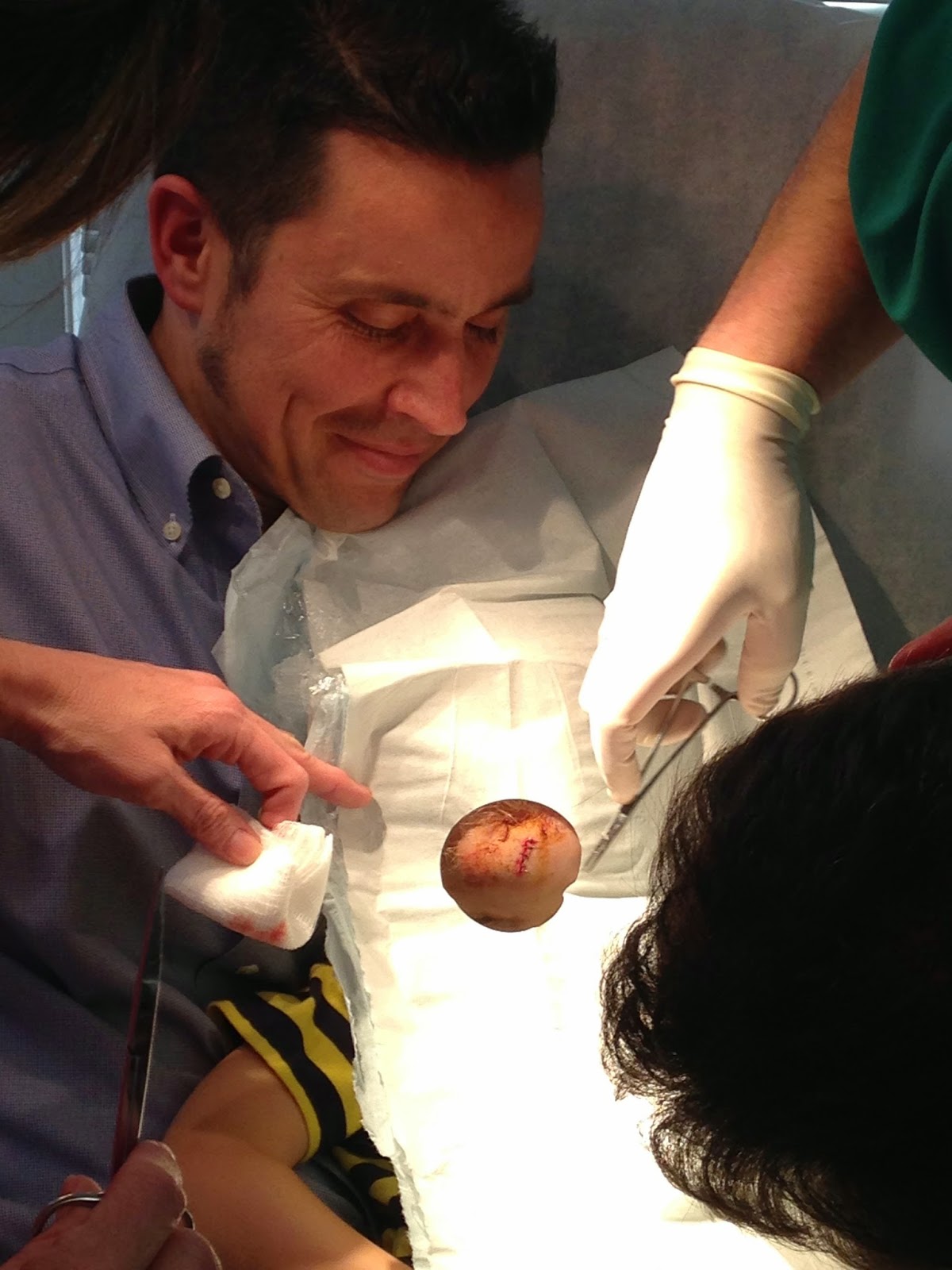 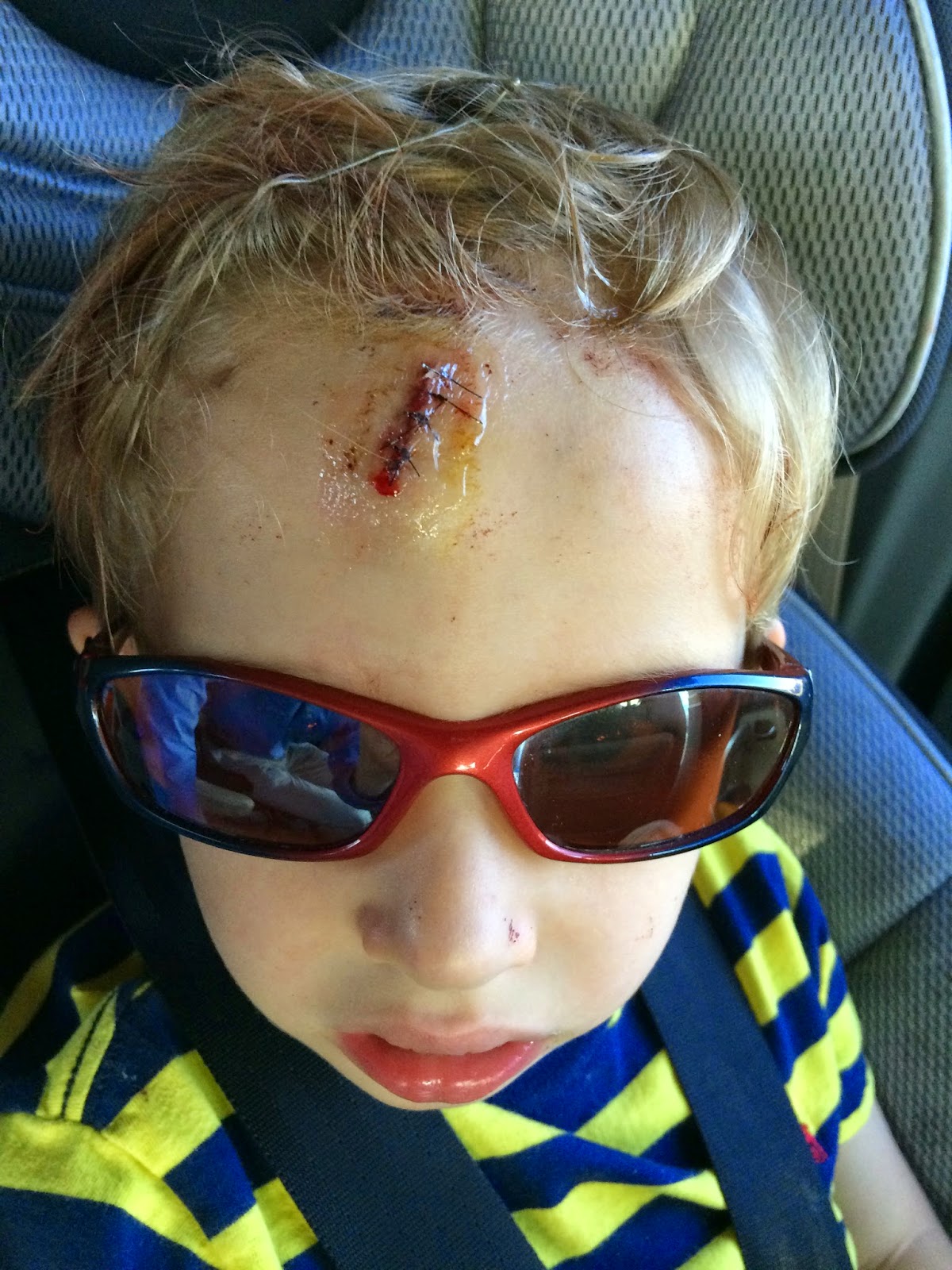 He was such a good patient.

Afterwards, we picked up Hannah from the soccer fields and went to dinner at Puebla’s, which we planned to surprise Hannah with all along. Joseph was excited to go, too. No one loves chips and guacamole more than him. Had to get a picture of Daddy with the patient and the soccer player: 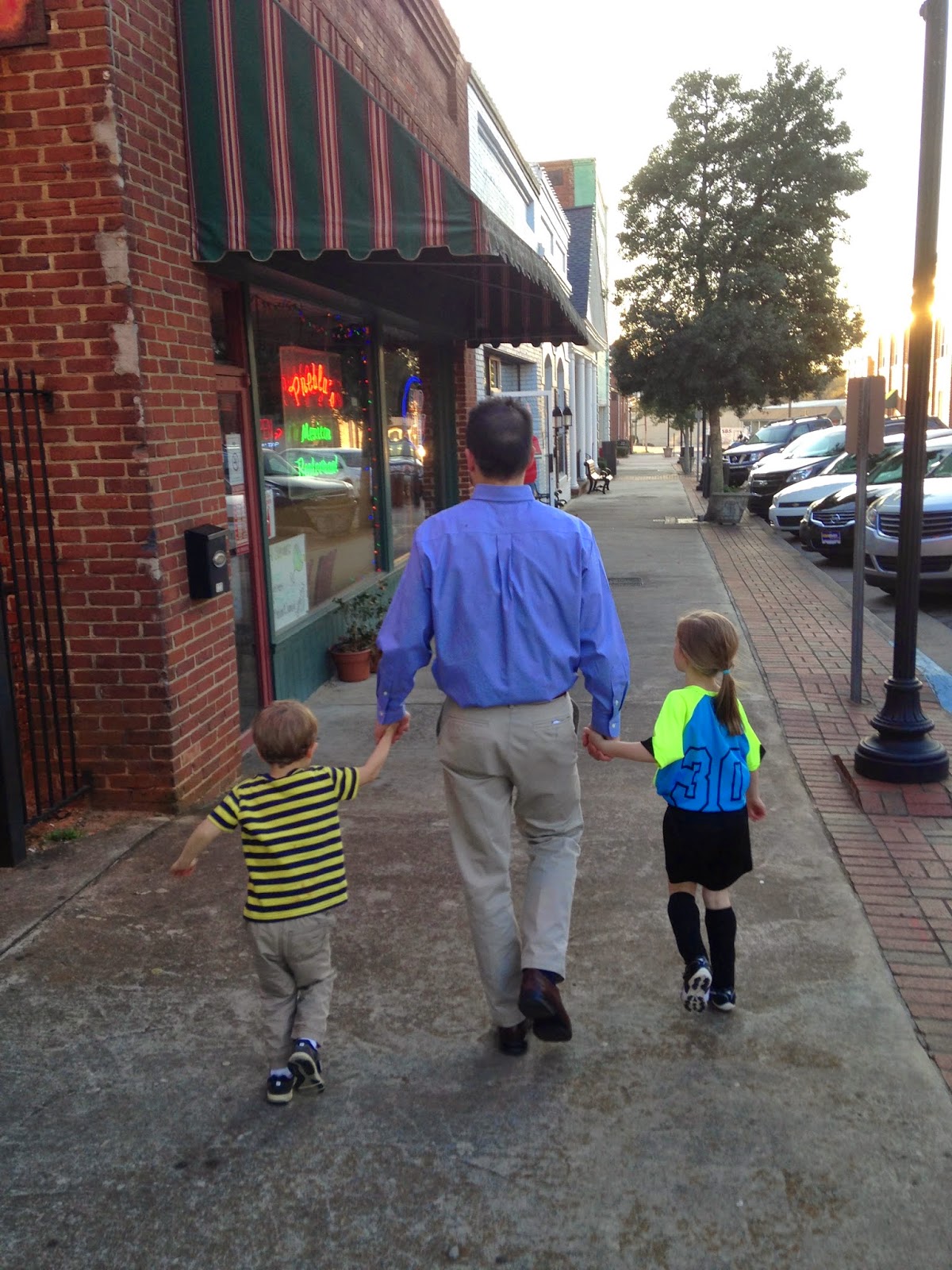 While at dinner, I received these pictures from my sweet friend, Caroline. 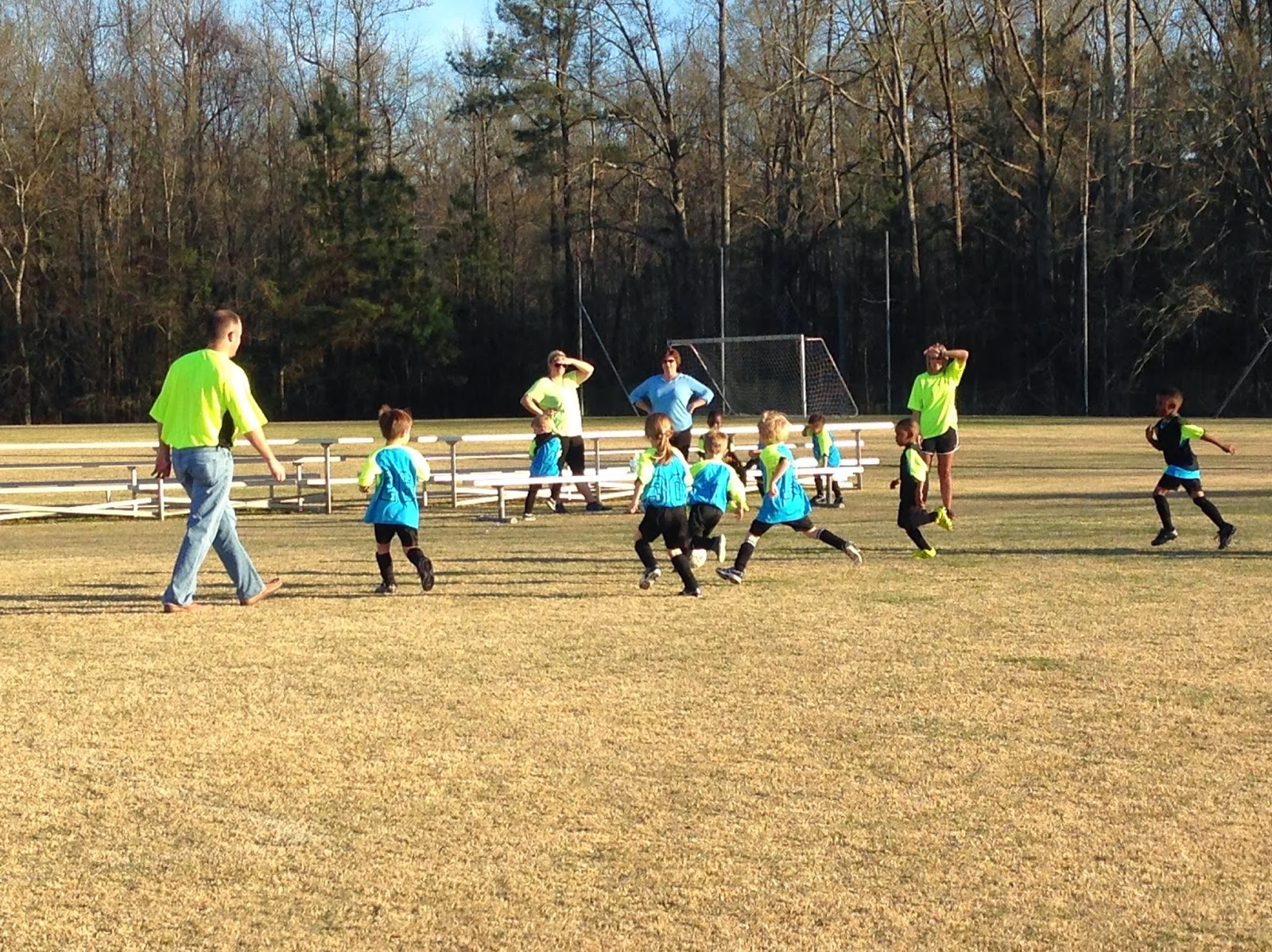 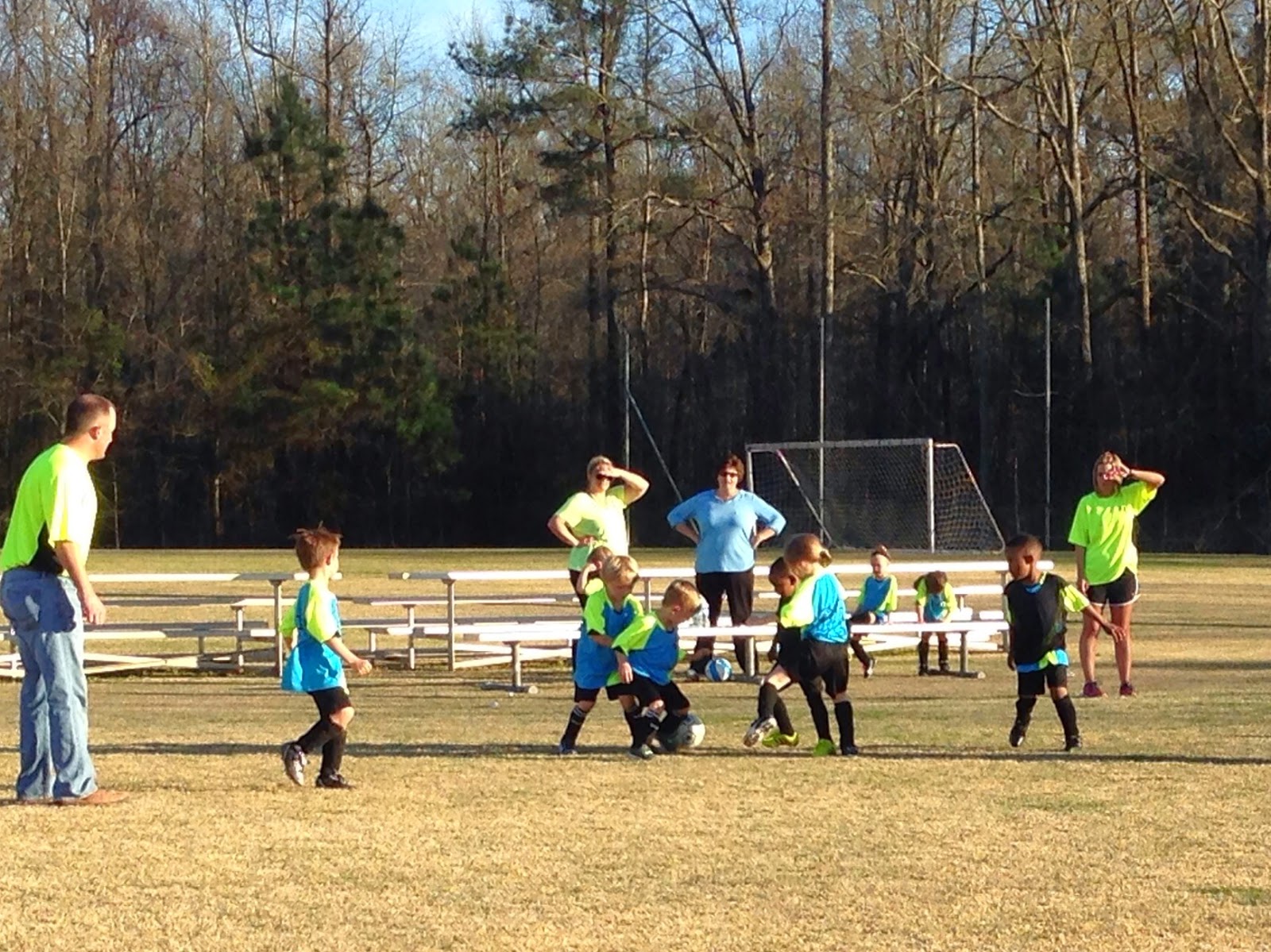 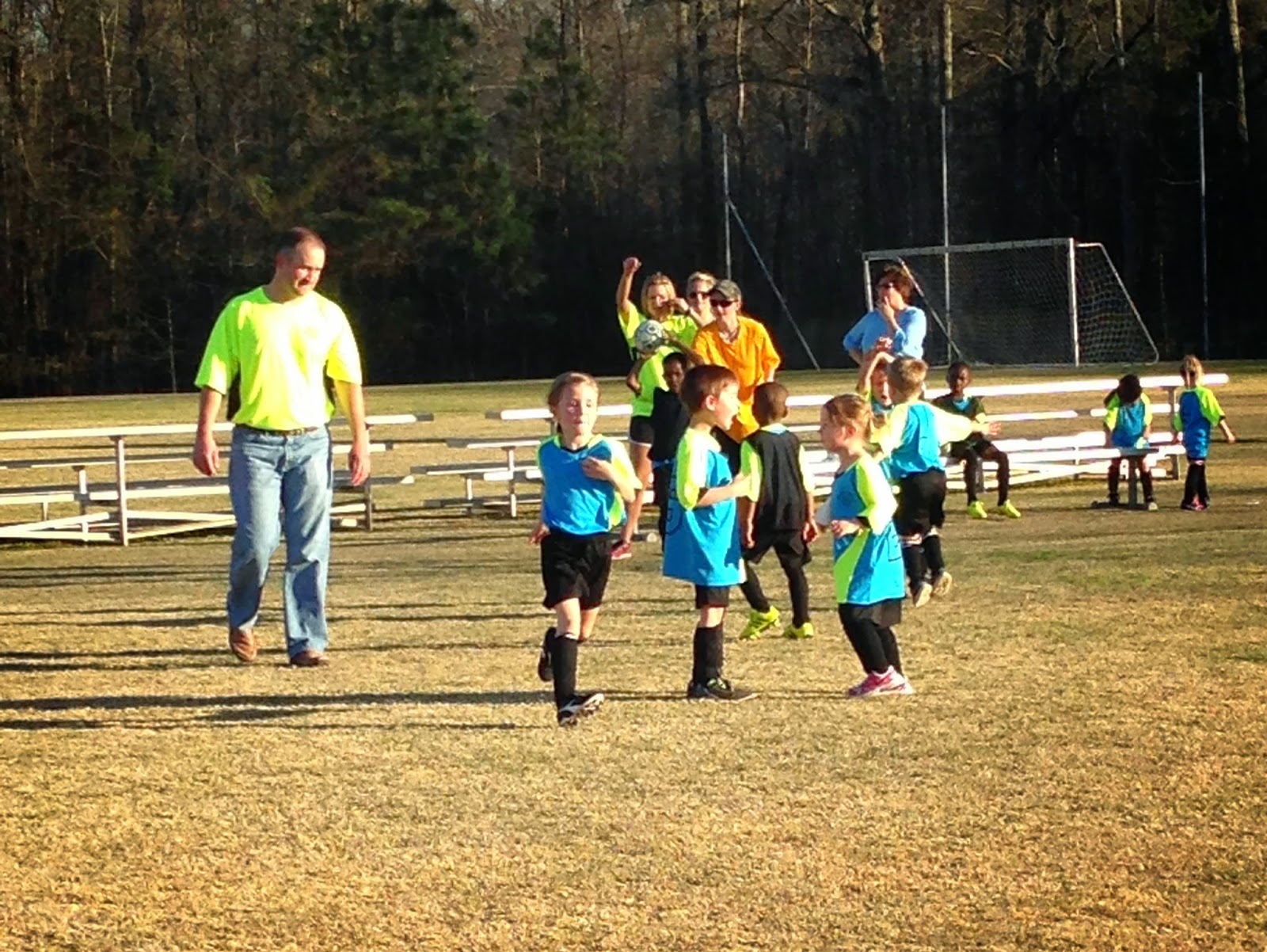 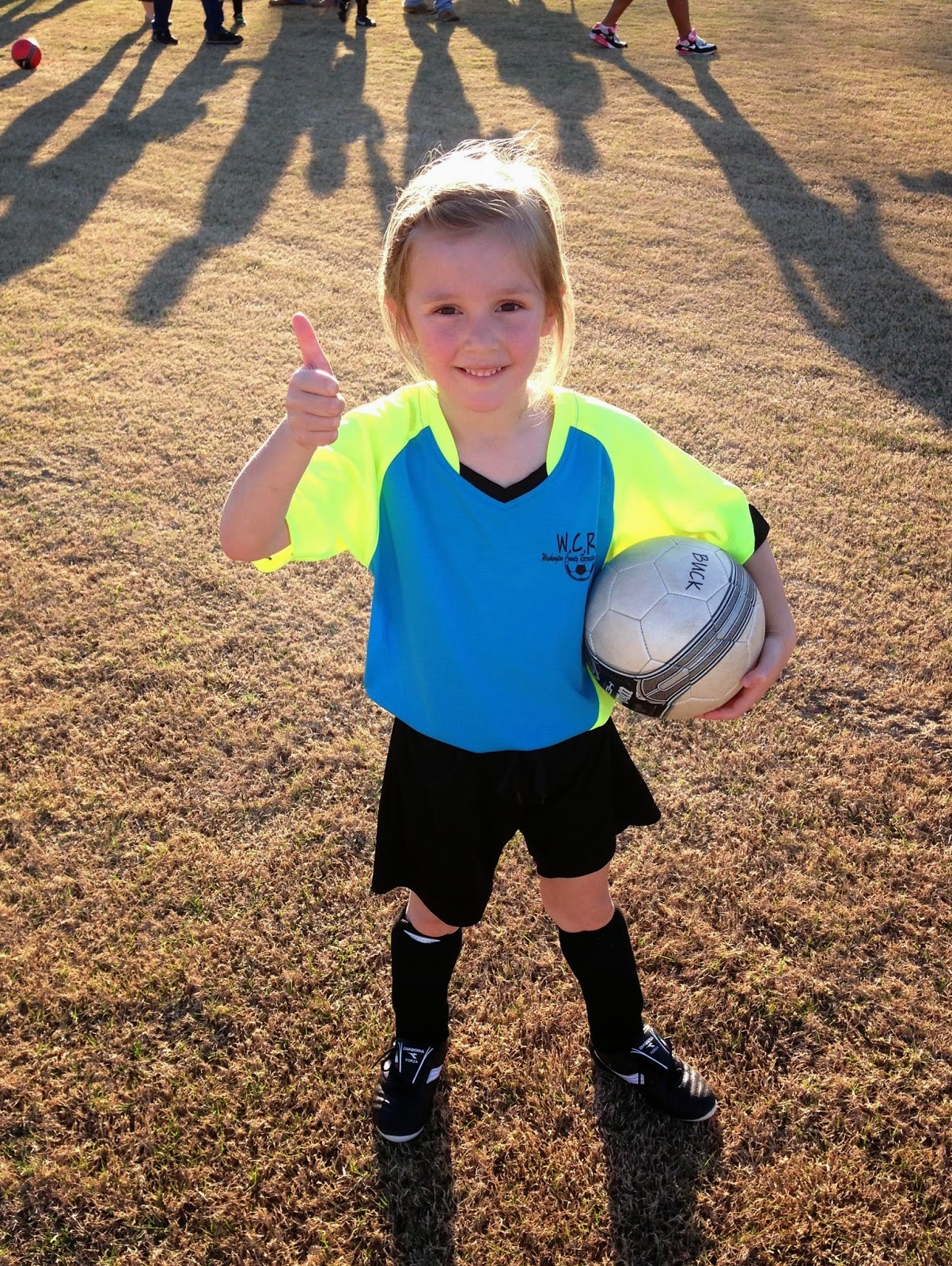 She had a great time playing in her first game. I can’t wait to watch her next time!

I snuck into Joseph’s room last night and took a picture of my precious boy, sound asleep. Completely exhausted. 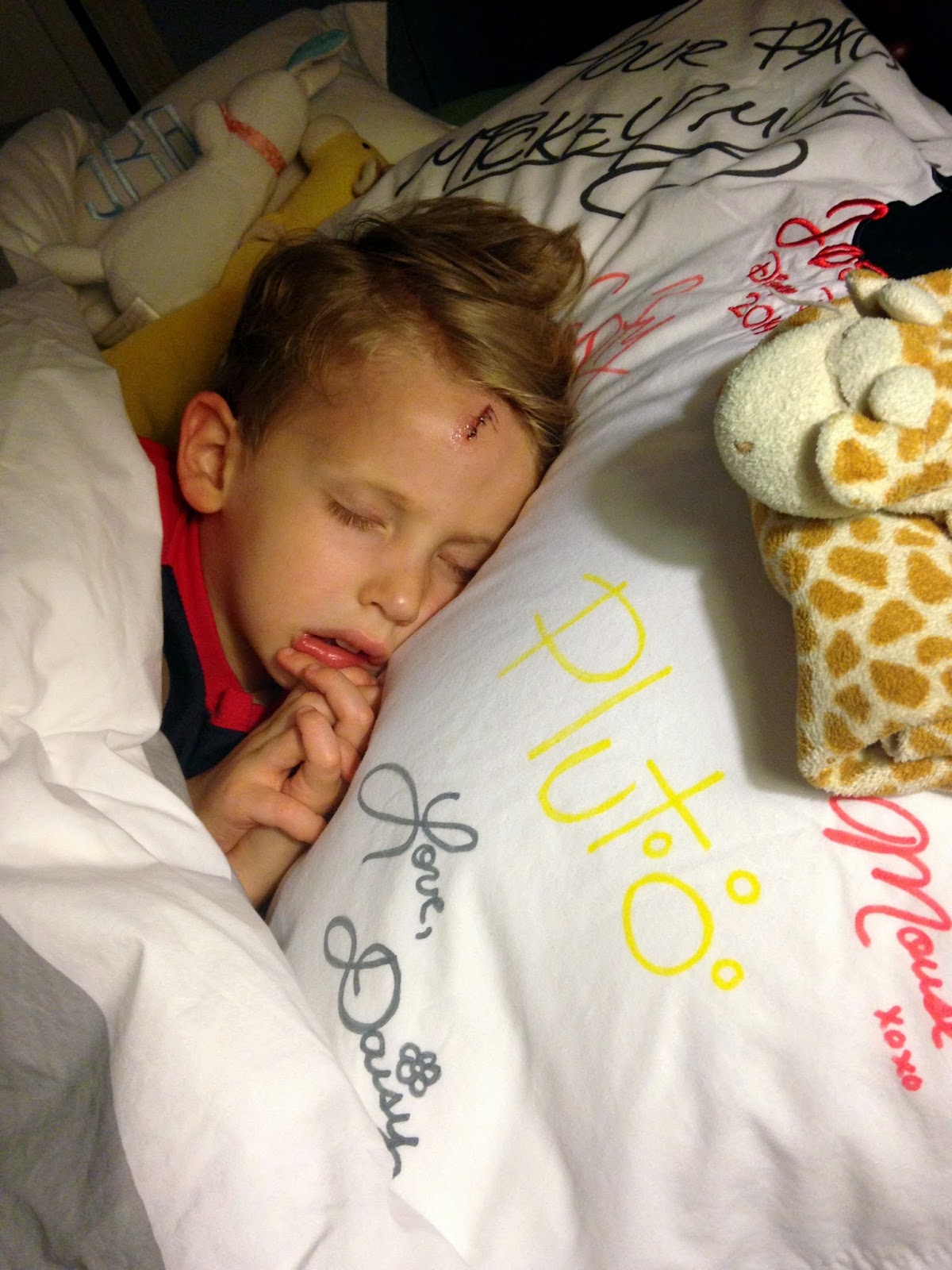 We all slept well last night.

Several times throughout this whole ordeal, Joseph asked “Why did you tell Hannah to run?” I couldn’t figure out why that was all he would talk about at first. And then later when I was talking to him he said that he was looking back at me as he was running after Hannah (who I told to run!).

Sweet boy, that one. I hate that he got hurt. I hate that he was in such pain. Any parent who deeply loves their child knows how it physically hurts to watch your baby hurt. I was hurting for him, no doubt. And worried.

But now, I’m mainly thankful. For a friend who is a wonderful surgeon. For a girlfriend who was there to cheer on Hannah at her first soccer game. For countless family and friends who’ve called, texted, and sent Facebook messages. And, most of all, that our little guy is ok, escaping with an ugly boo boo and perhaps a mild concussion, but that is all.

He will be fine. Truthfully, after knowing he was ok, I then worried about how bad the scar would be. Would my cute little guy have a big scar in the middle of his forehead for the rest of his life? That might sound shallow to think that so shortly after it happened, but I did. I don’t want anything messing up that beautiful face.

During our picnic lunch on the back porch today, Joseph told Joe and me, “Dr. Rob took good care of me…he is a great doctor…and he let me watch Jake on his phone!” Between telling everyone what happened and having stitches to show off at preschool, he is doing quite well. Very proud, owning the whole running-into-the-pole thing.