Last Tuesday, Joseph’s class went to the firehouse. Parents join their kids at the preschool and we all walk together a couple of blocks away to the Sandersville fire department. We did this twice with Hannah (3- and 4-year-olds go) and it was finally Joseph’s turn.

Unlike a lot of the other children, he loved when the fireman got all dressed up in his gear. 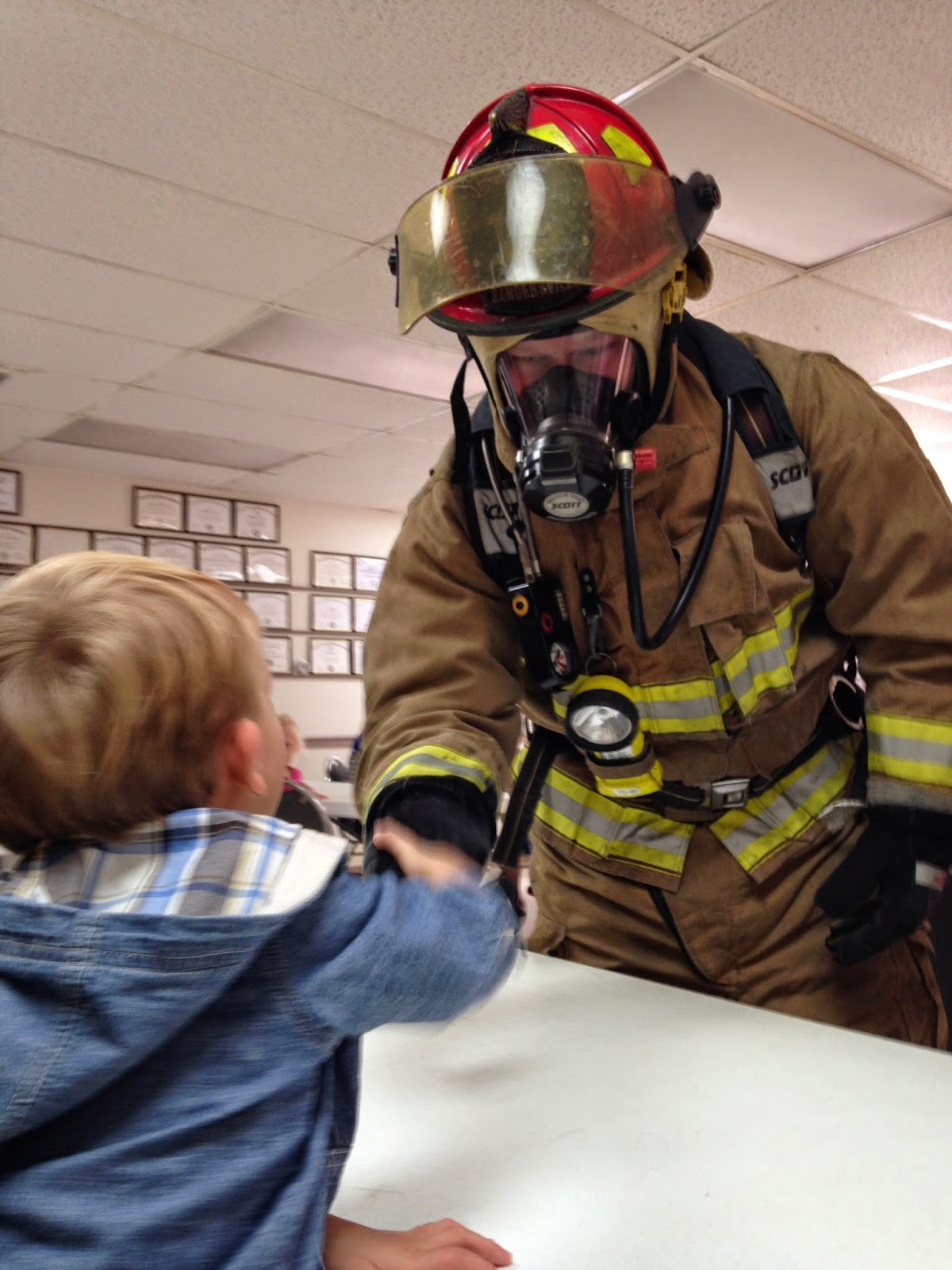 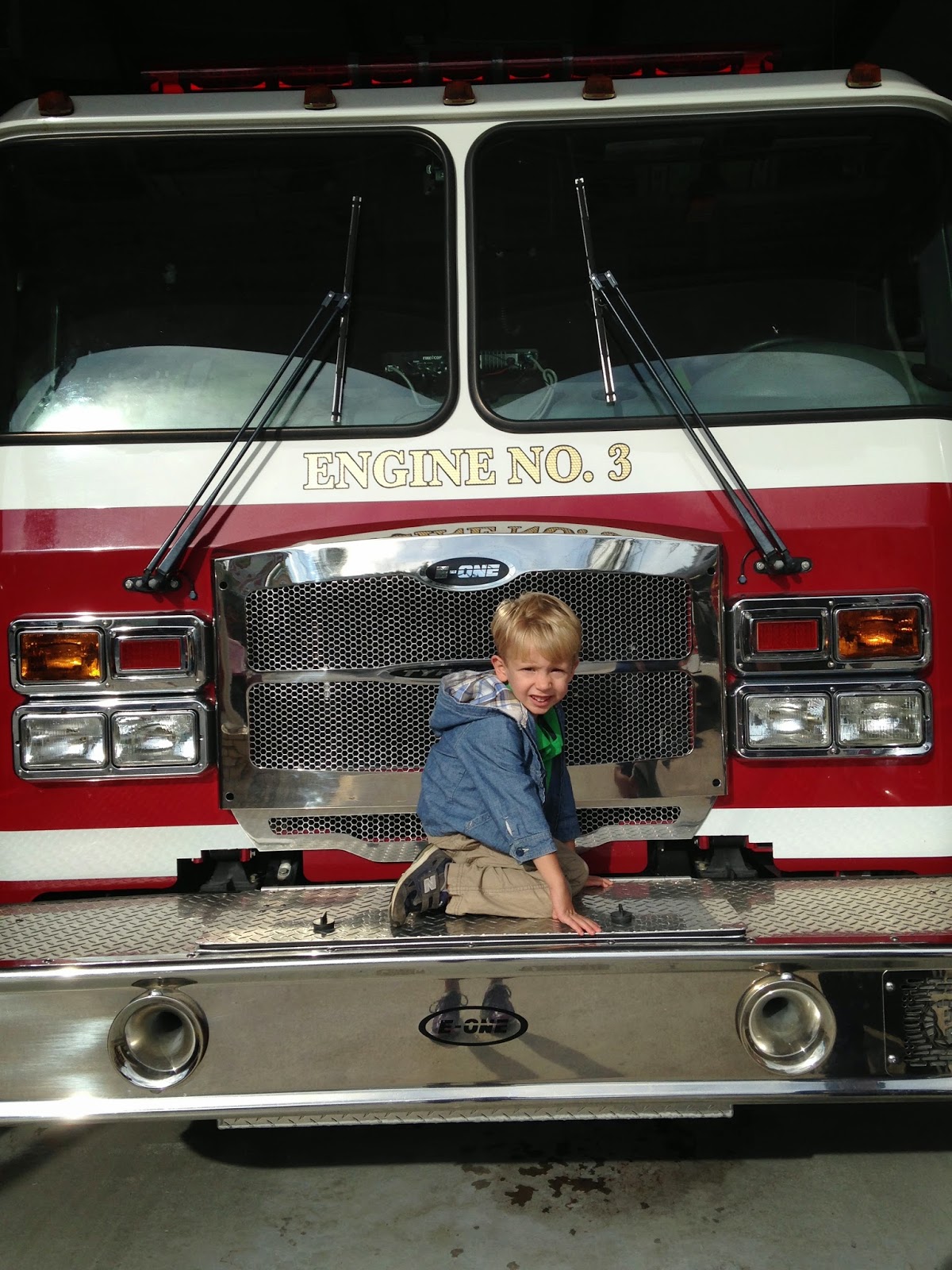 He wasn’t sure about me putting him on the truck, but he did find the big hoses fascinating. 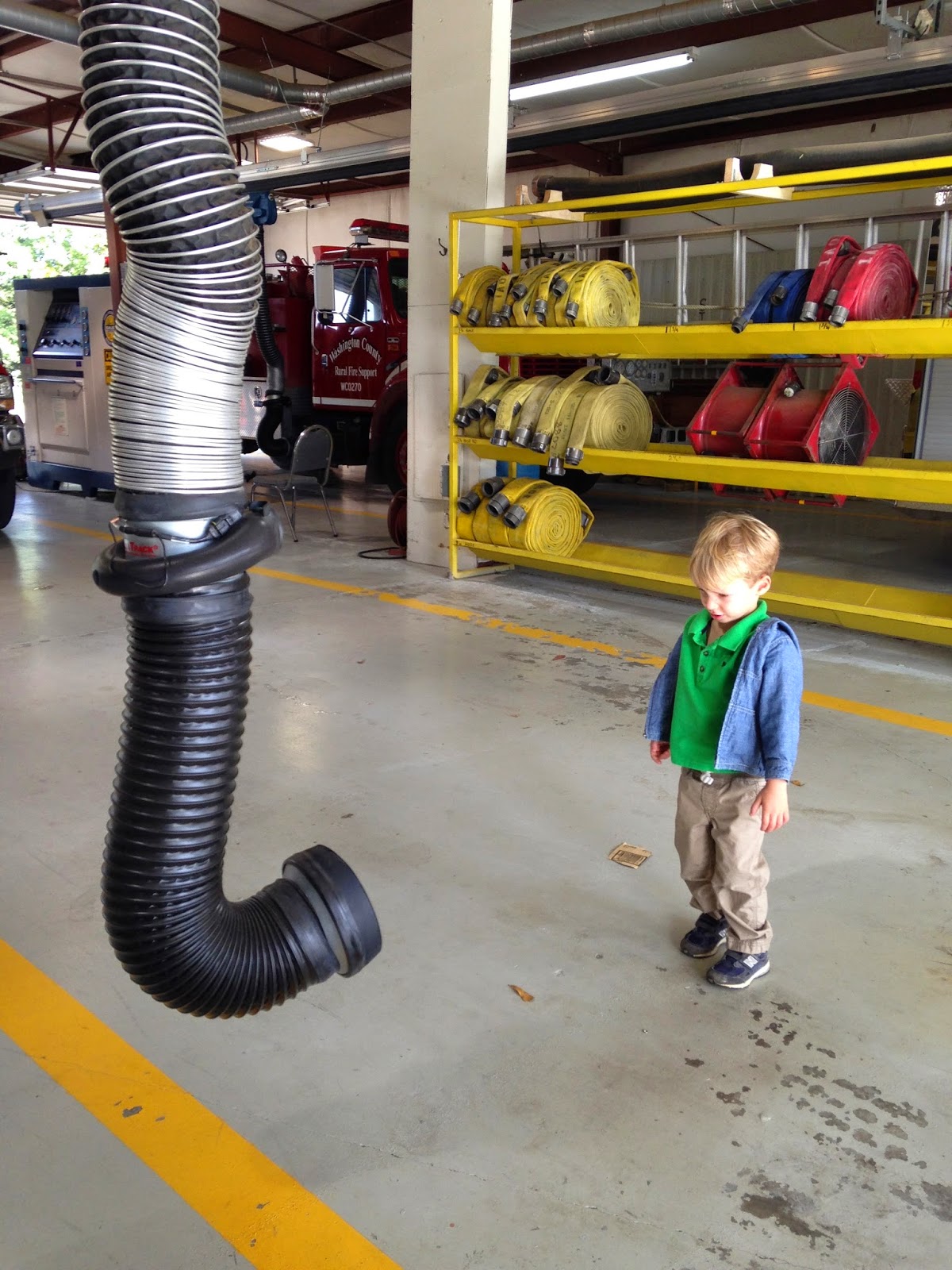 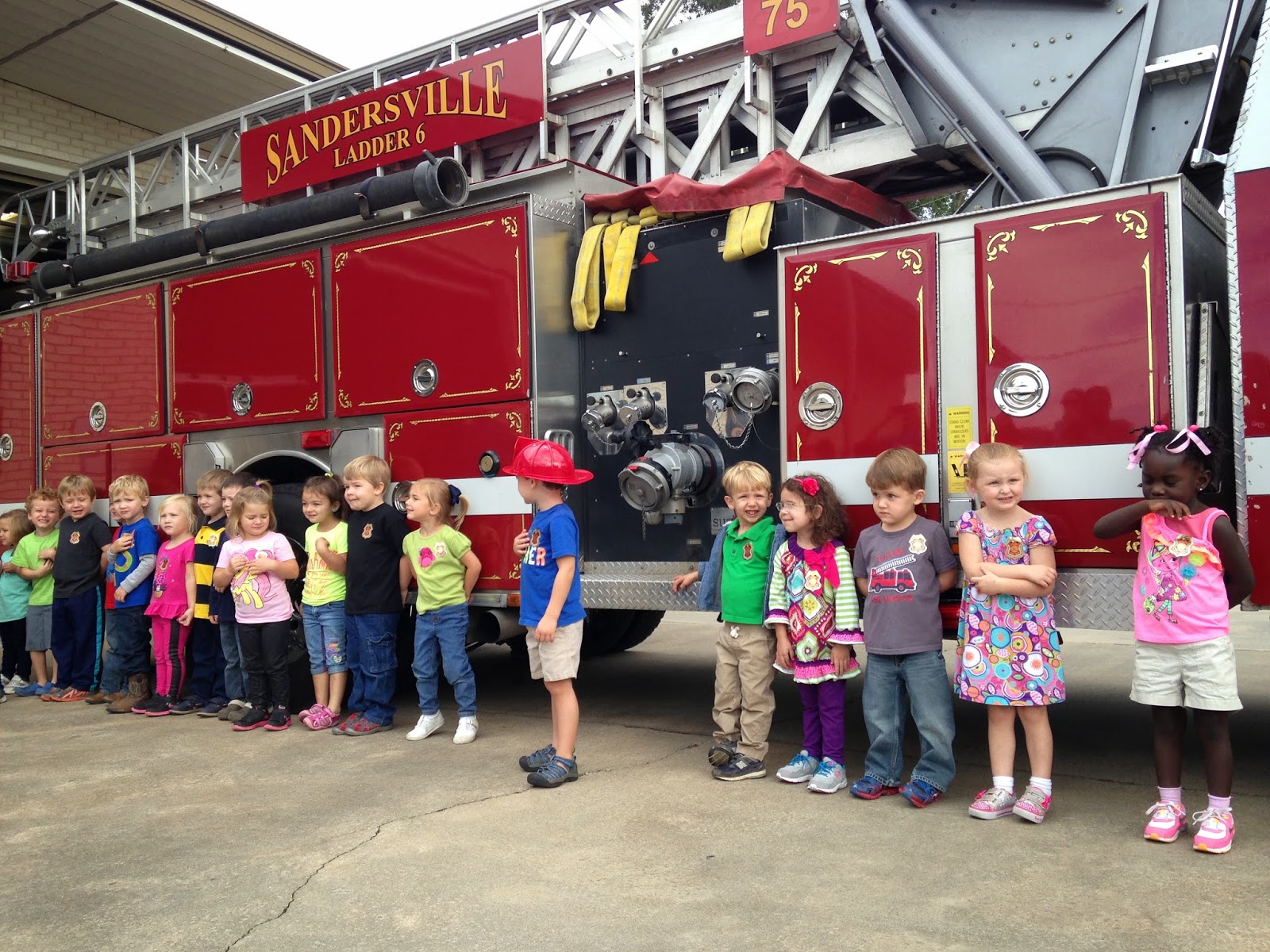 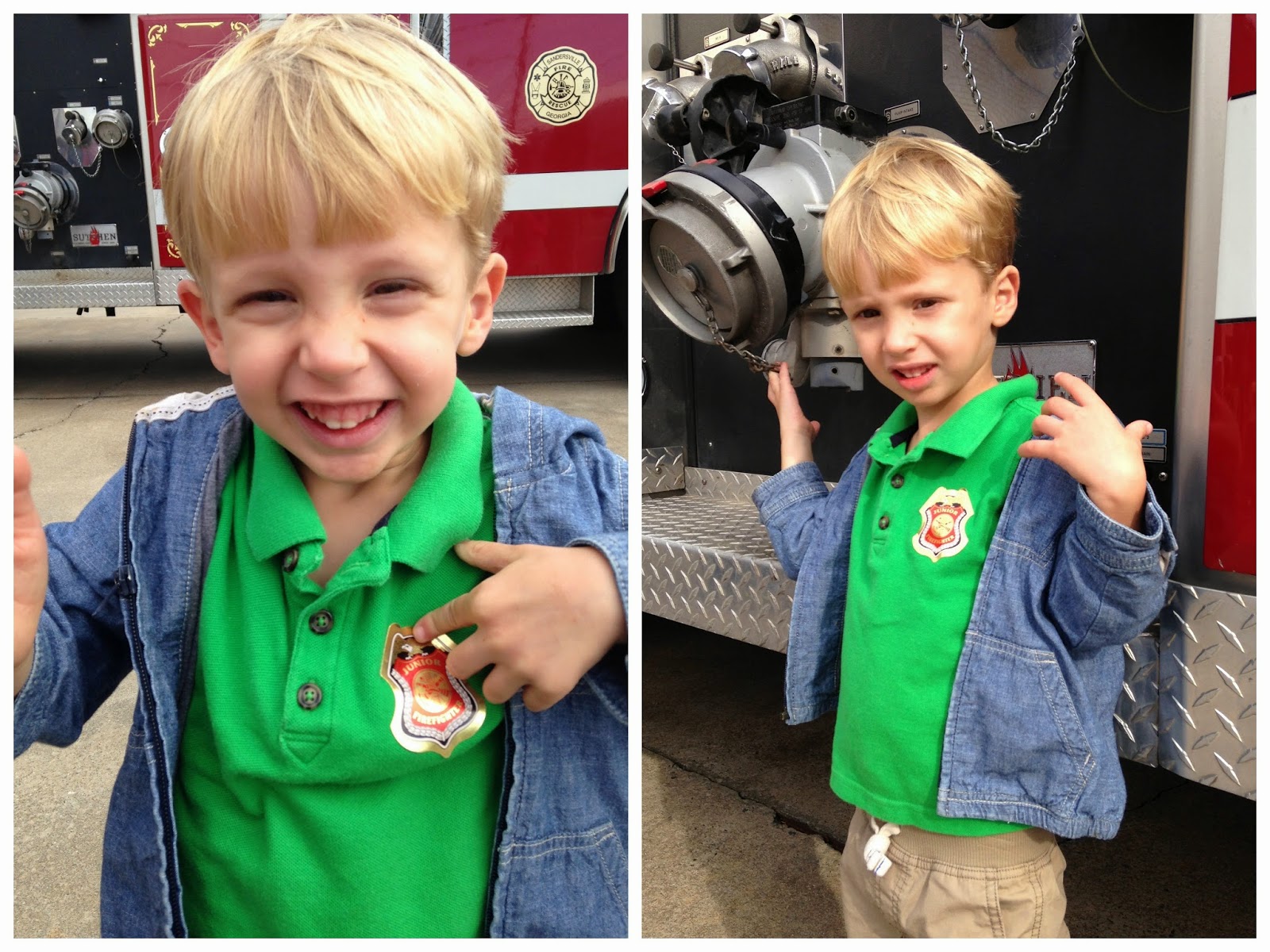 On Wednesday, Hannah had her first “real” field trip: Tour of Big Machines. She boarded a school bus at 8:30… 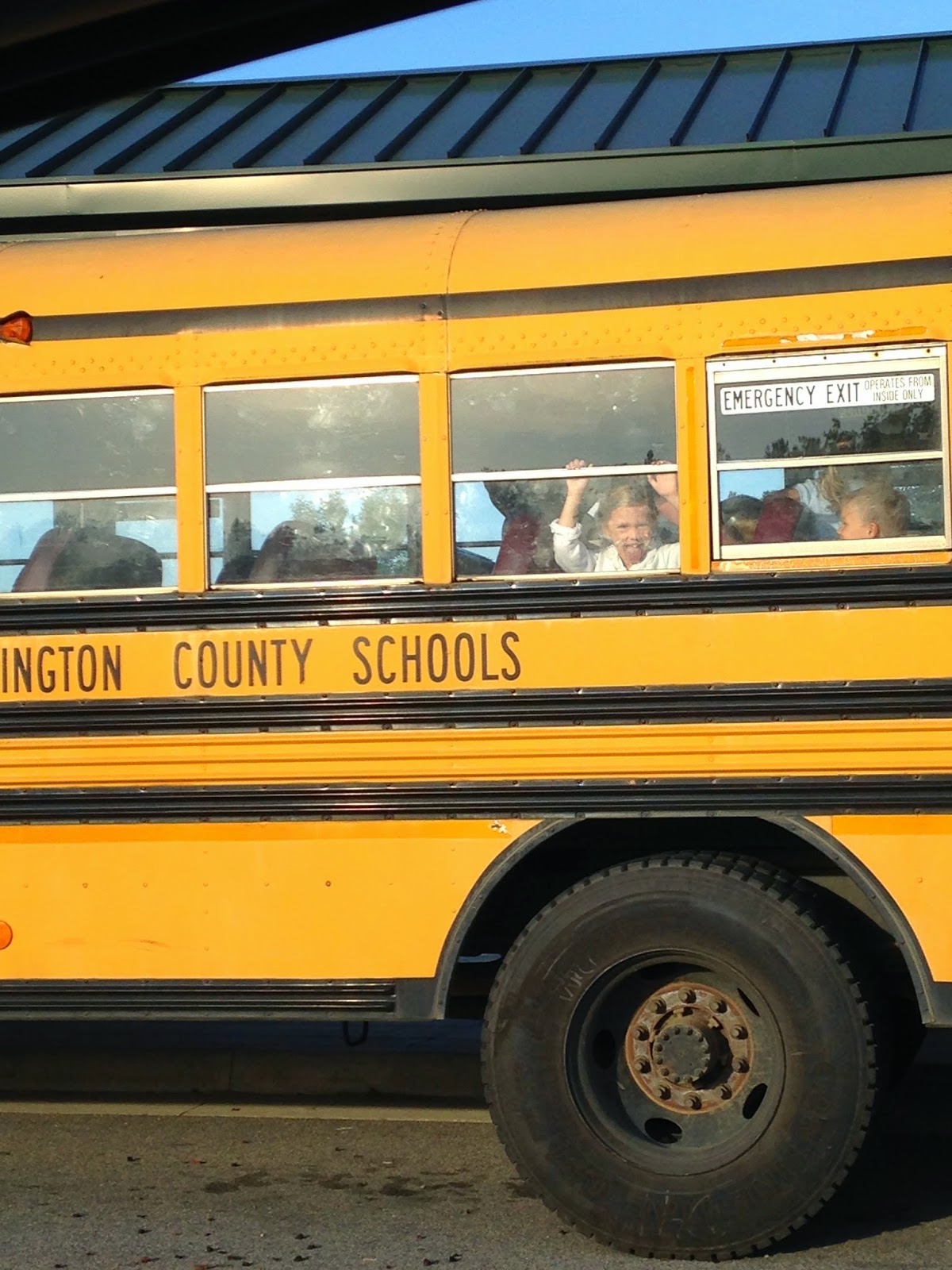 Tongue hanging out, as is typical of Hannah (and Michael Jordan).

I could just stop right there. I think that might have been her favorite part. But the rest of the day was pretty cool, too. She had a tour of emergency vehicles outside of the hospital. 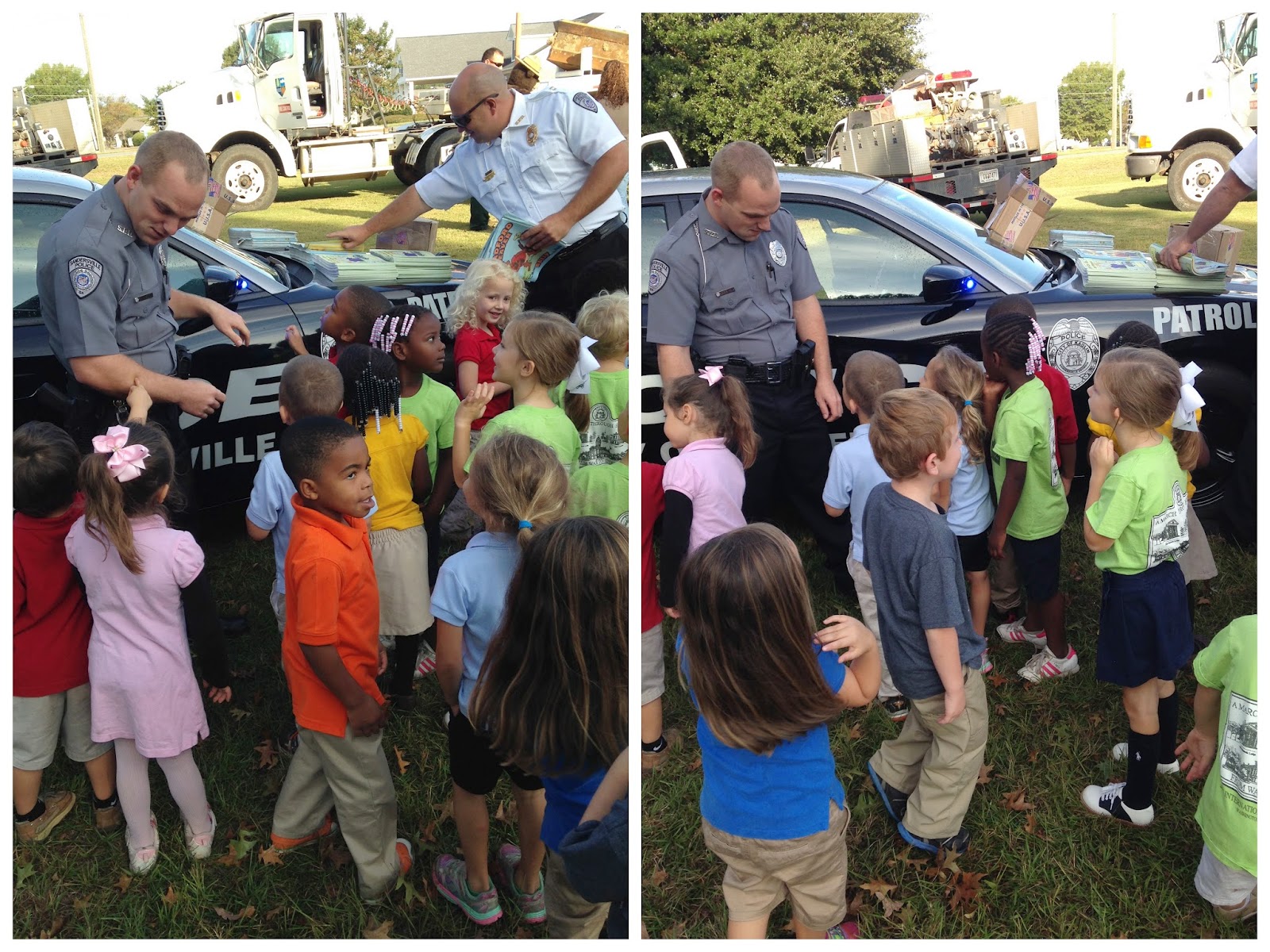 “Hi, my name is Hannah,” she is saying to the officer in that photo on the left. 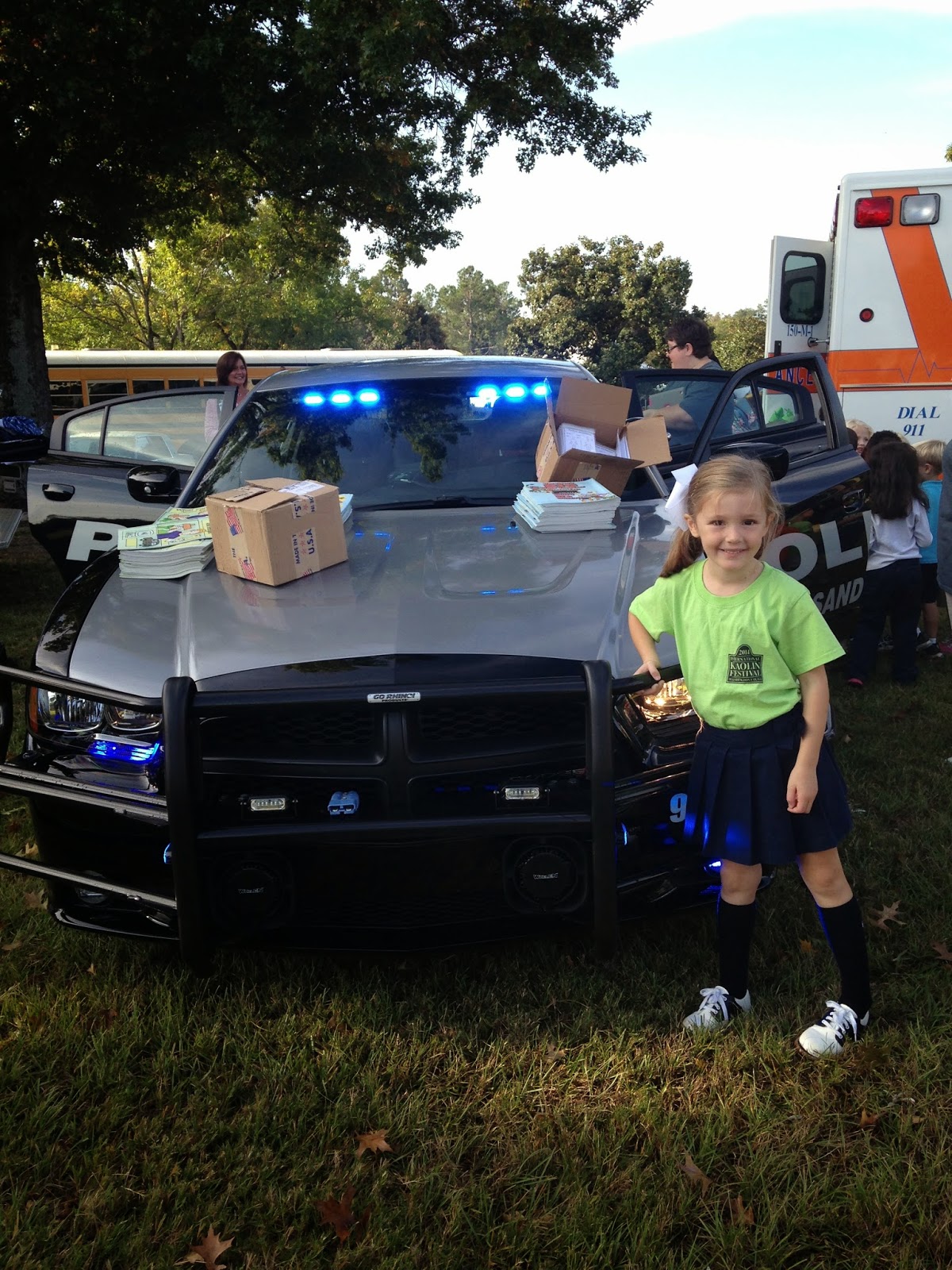 She got to climb in the back of the police car and through an ambulance. 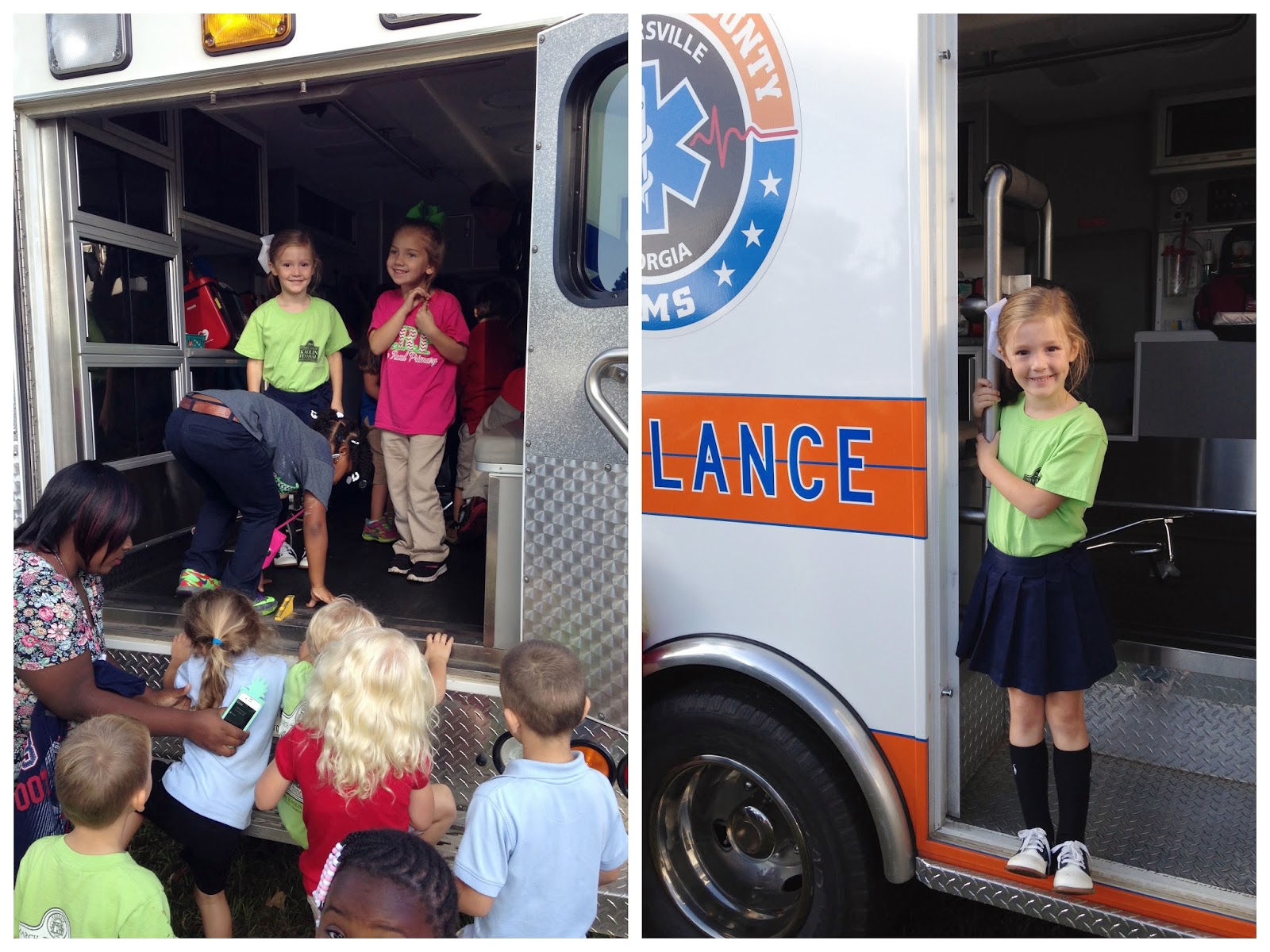 …possibly the same ambulance her daddy rode in last July. 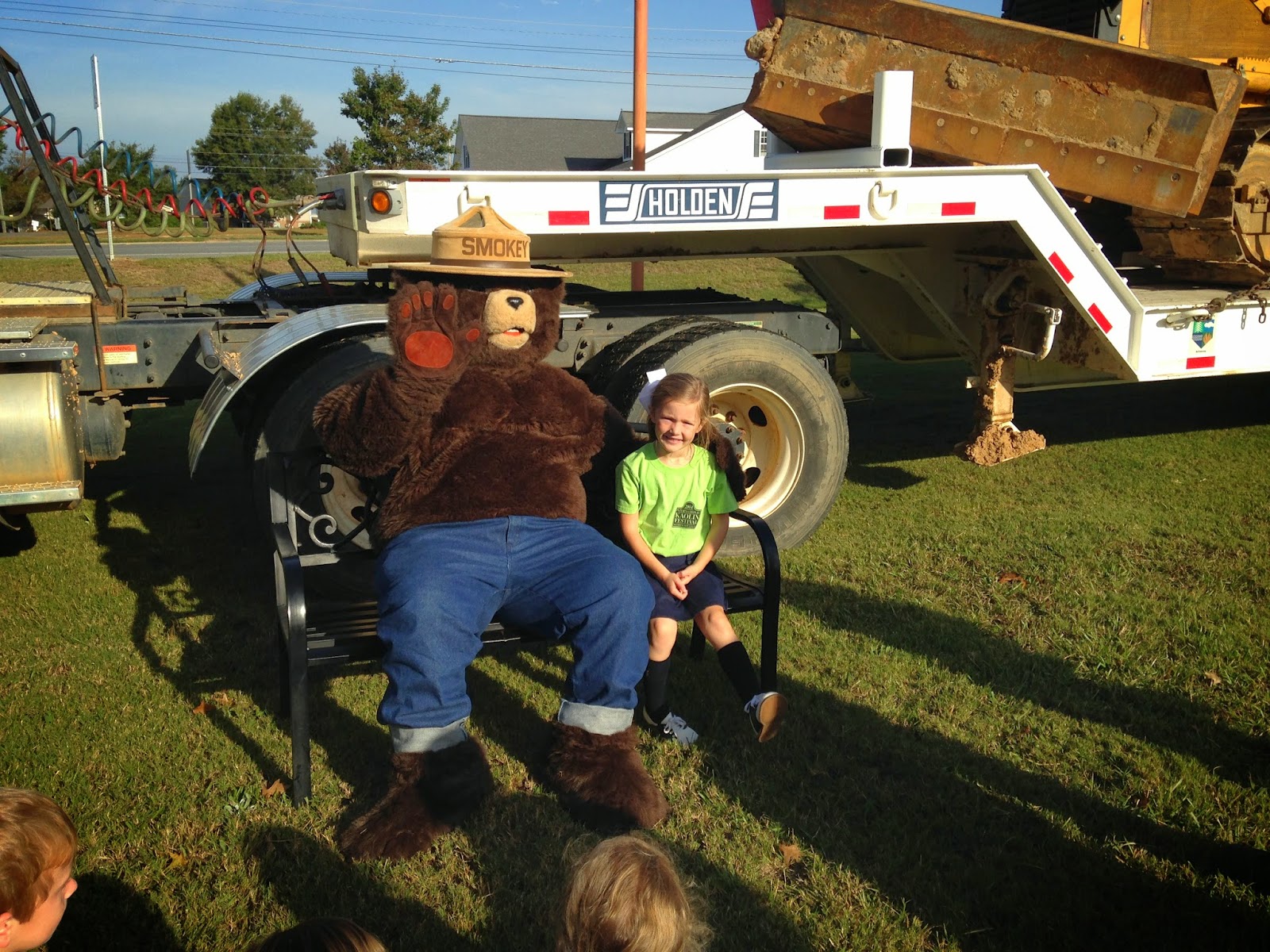 She met Smokey Bear and got a picture with her class in front of the fire truck. 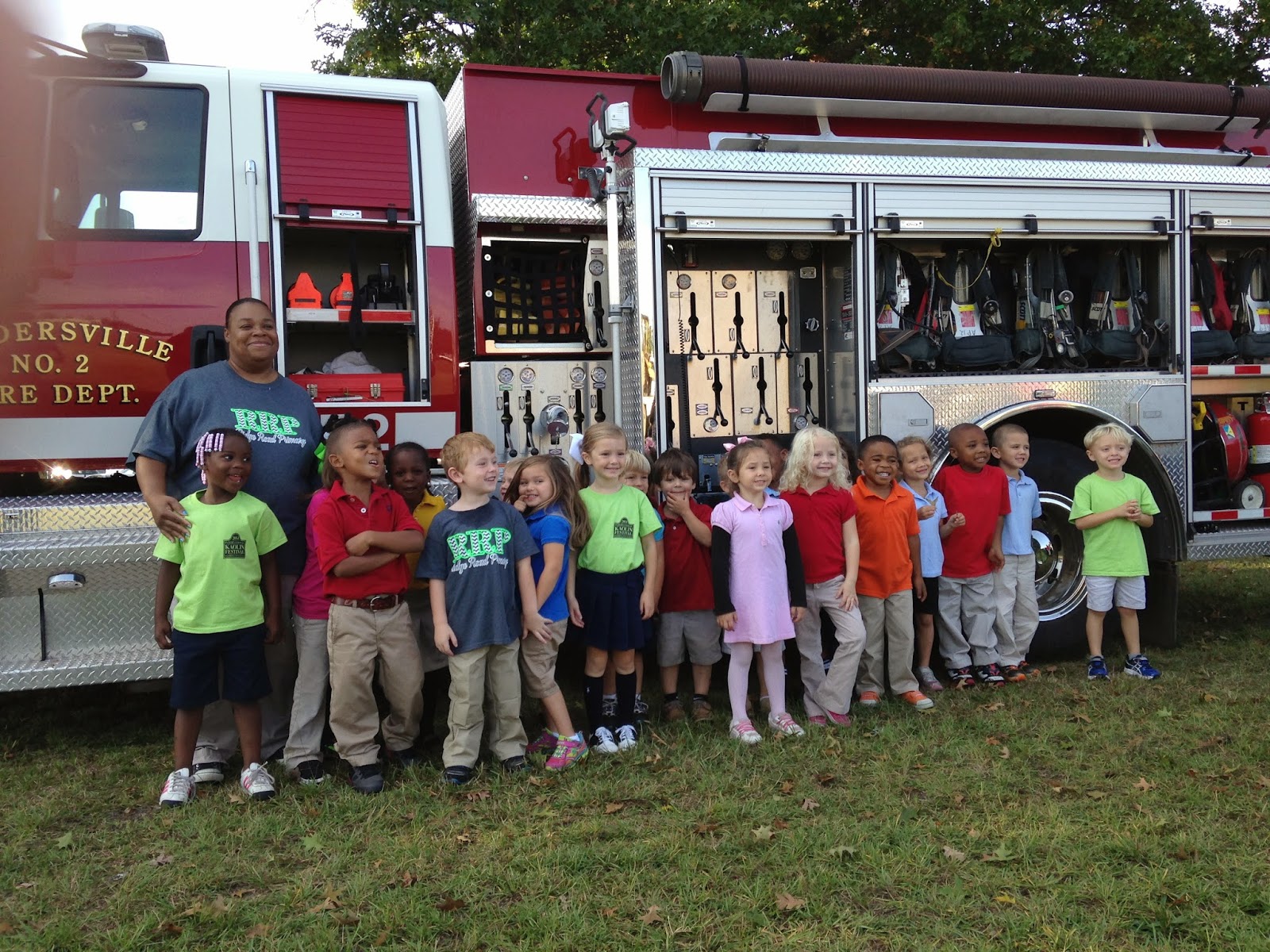 They watched a helicopter land and even got to sit inside! 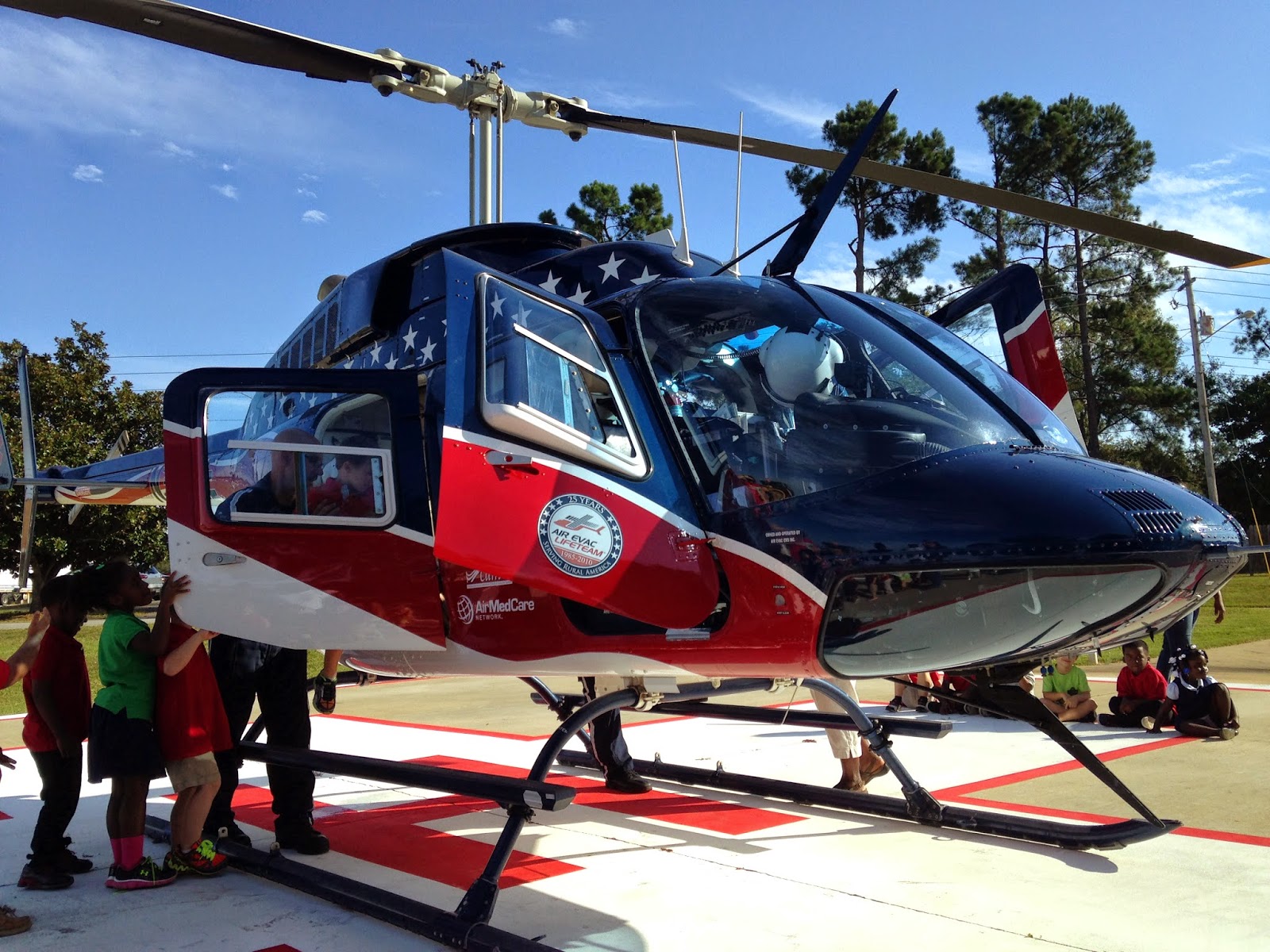 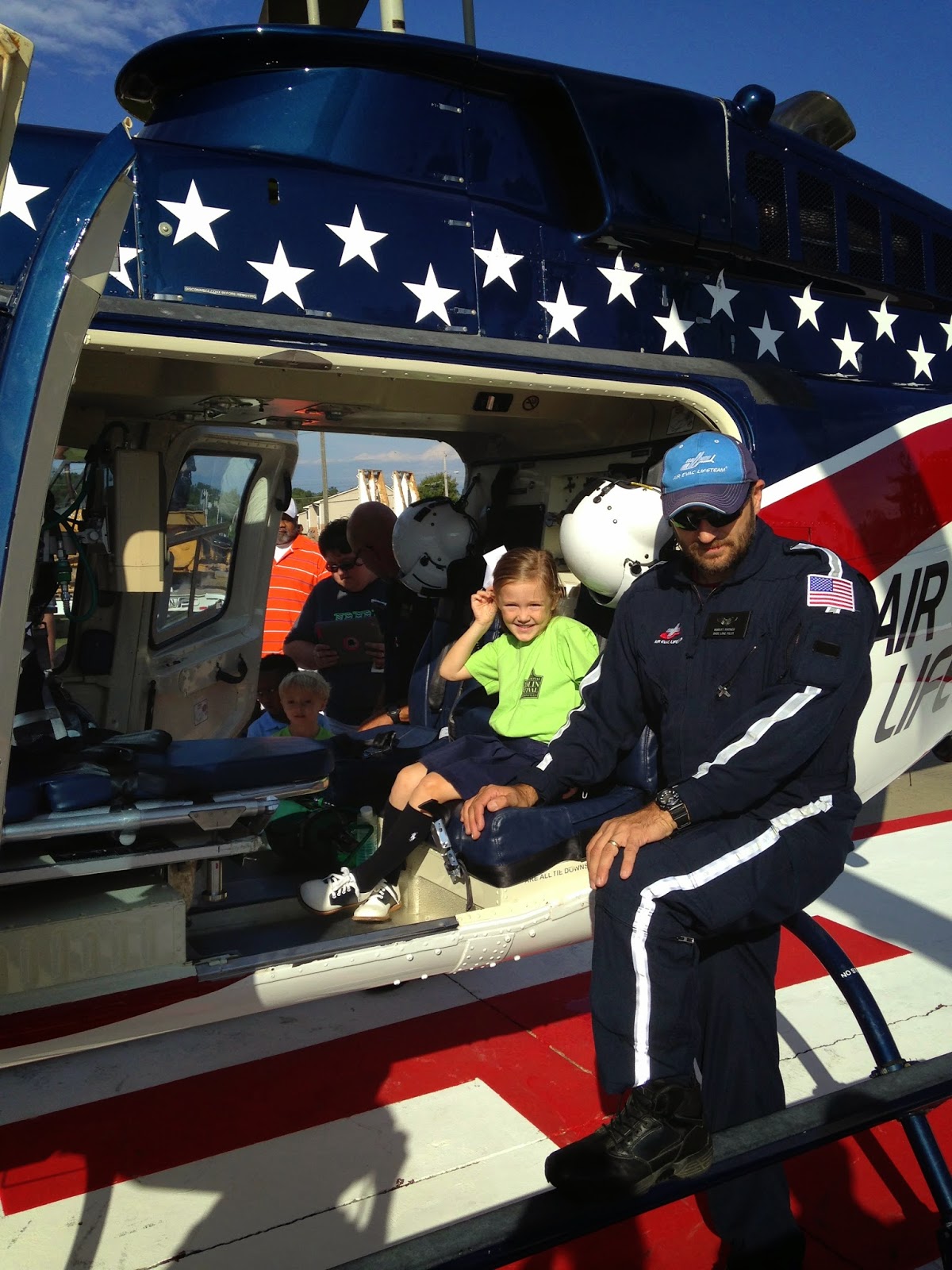 Pretty awesome. I haven’t ever been in an helicopter, but my daughter has!

The kids boarded the bus again and headed to Washington EMC (electric membership corporation). They learned all about electricity and what the EMC does. They also got to see some lightning…

…and the highest bucket truck. 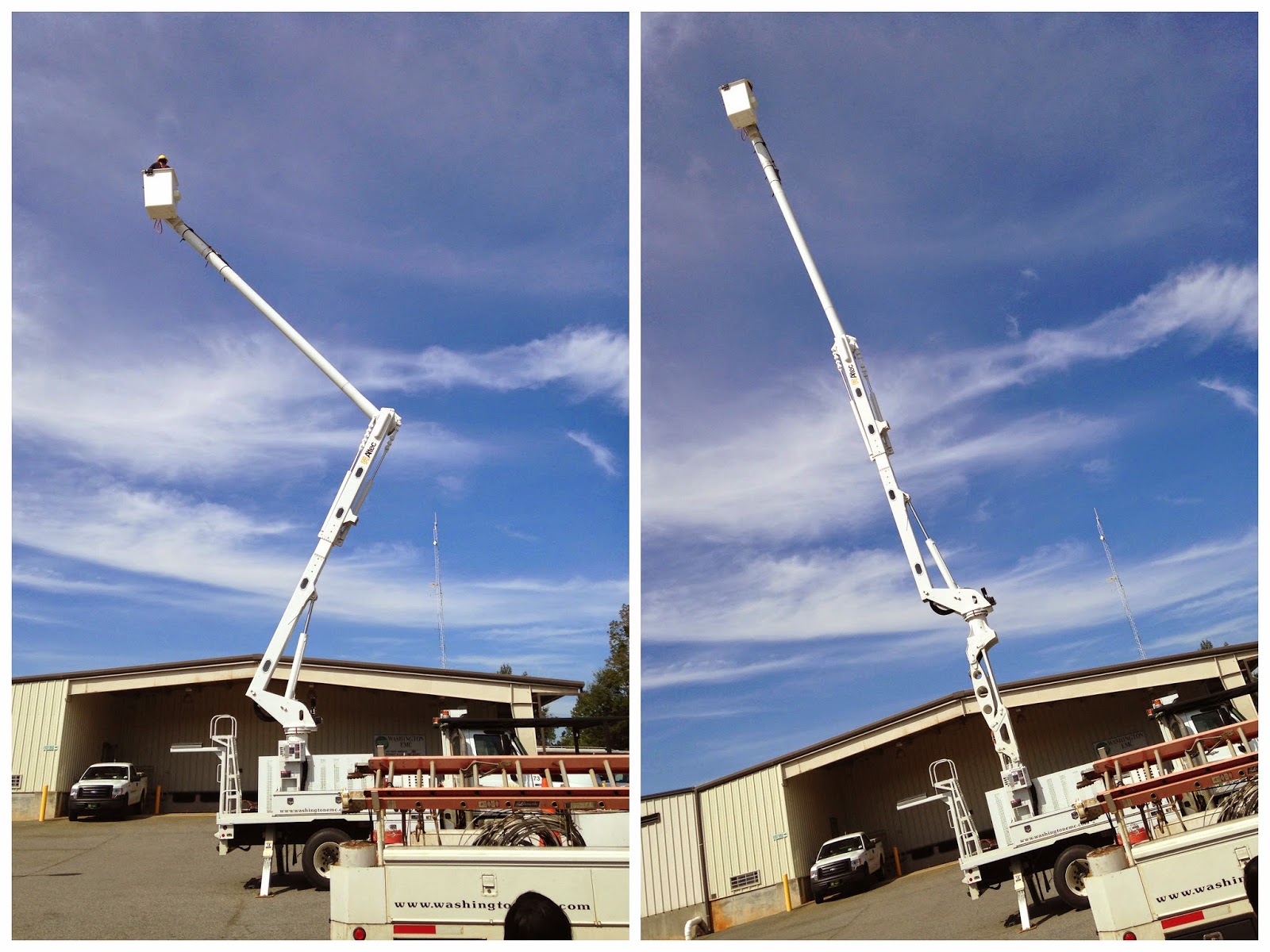 Then they rode the bus to the park for a picnic lunch and playtime before ending their day. I had fun, too, and was glad to get to tag along.

Thursday afternoon… Sometimes I can’t help but taking pictures of Hannah when she comes into the room dressed like this: 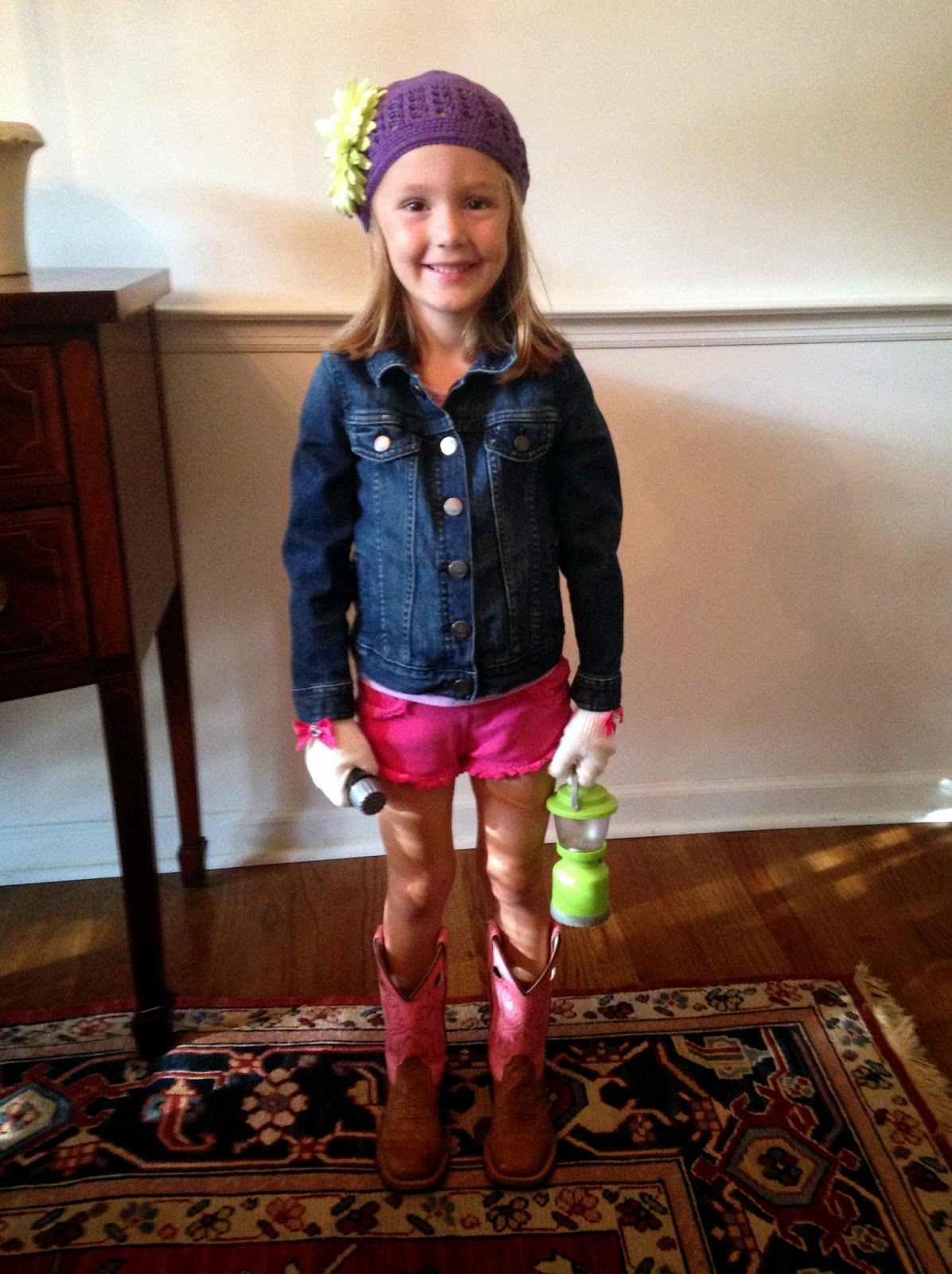 Cowboy boots and gloves, microphone and lantern. All the essentials. She helped her brother get ready and they were off to “free their friends”. I’m not quite sure where these friends were, but it was quite an adventure. 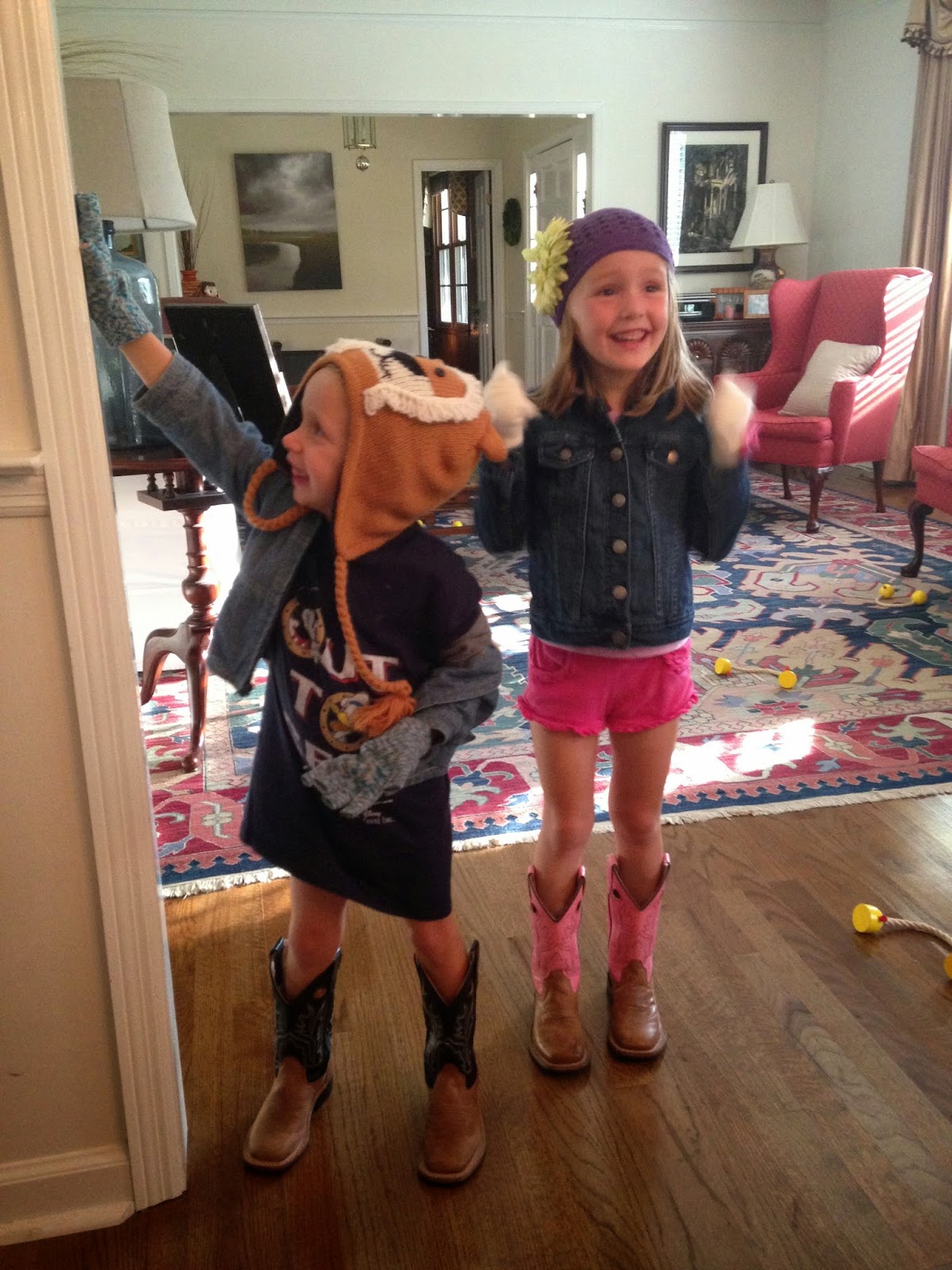 It was very entertaining as I listened to them make their way around the house in imaginary land.

Friday morning, I agreed to let Joseph come out of his room earlier than usual, as long as he was quiet while I had my devotion time. But, how sweet is he – sitting next to me on the sofa in the playroom eating his “yucky charms”? 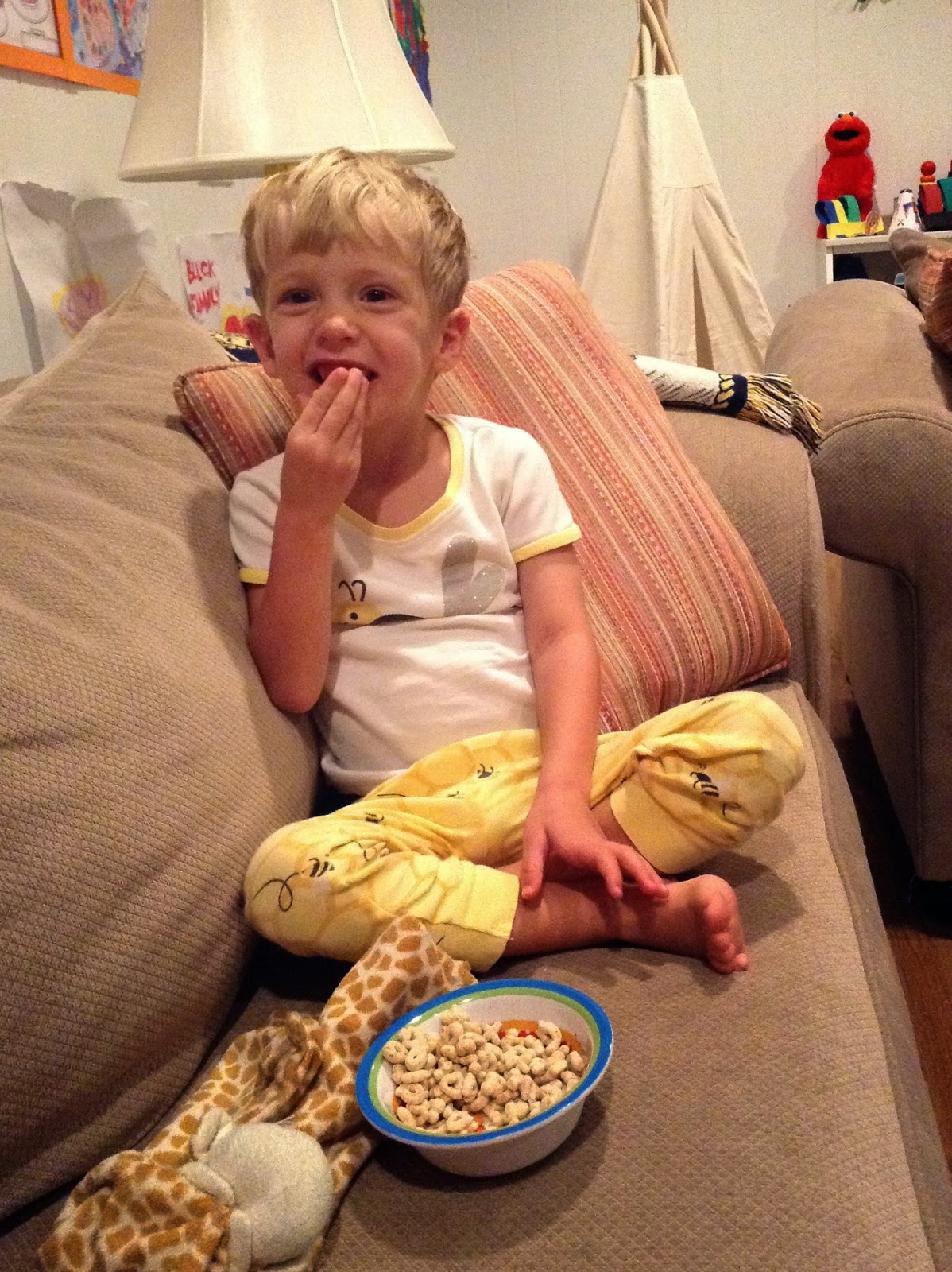 I love that kid.

Friday was a school holiday so we took full advantage and planned a fun couple of days in Atlanta. Chloe Puppy the Monkey drove part of the way: 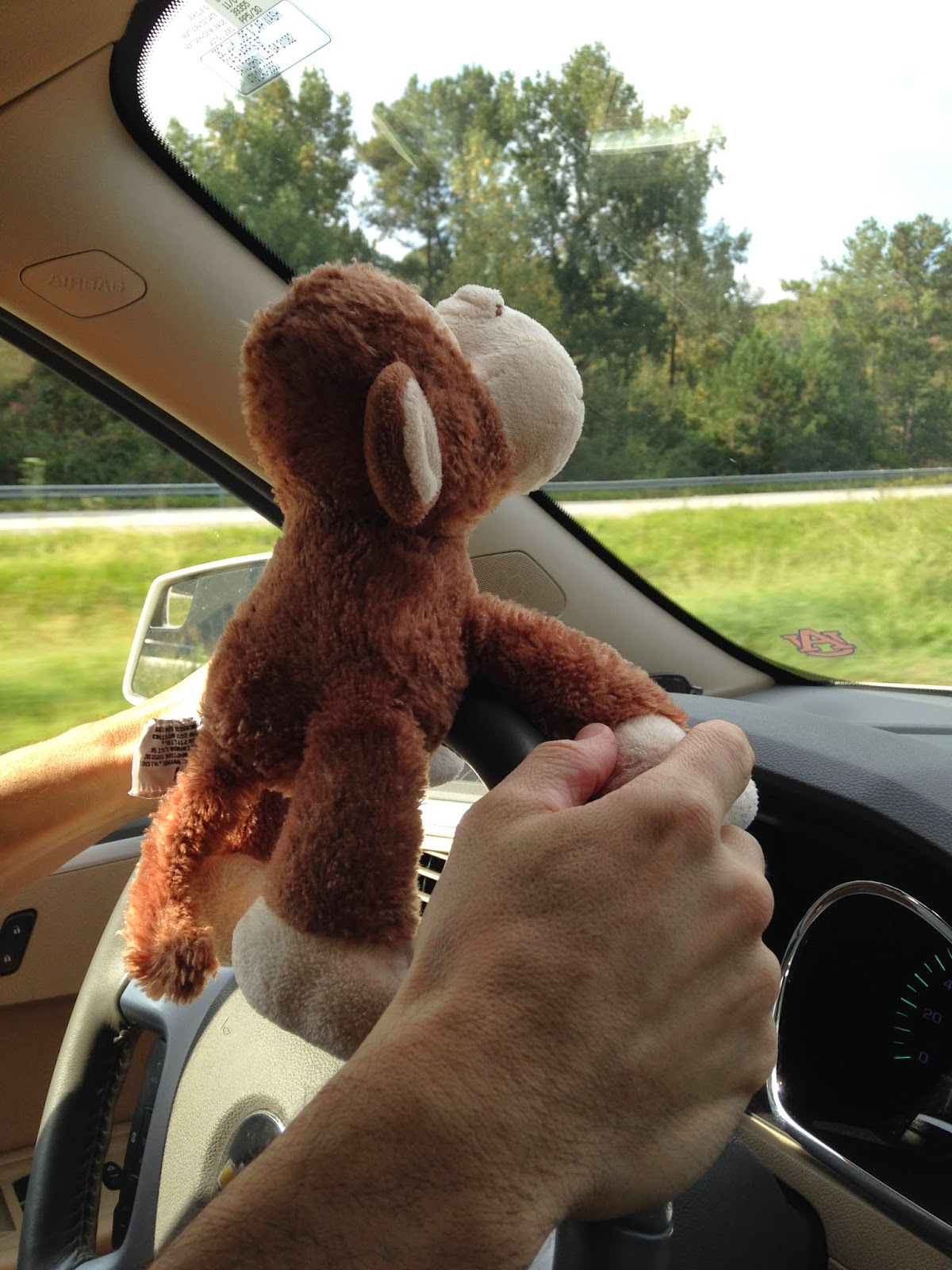 We started the day at Scott Antique Market. My main mission was to find something bronze to buy my Honey for our anniversary, as 8 is the year of bronze. Unfortunately other than a few horse statues, which I would love but he would not, there was nothing. Boo.

Still, we had a good time, and the kids were mostly agreeable and happy. We went from there to downtown, where the boys dropped off the girls at Philips Arena. I surprised this cutie with tickets to Disney on Ice – FROZEN! 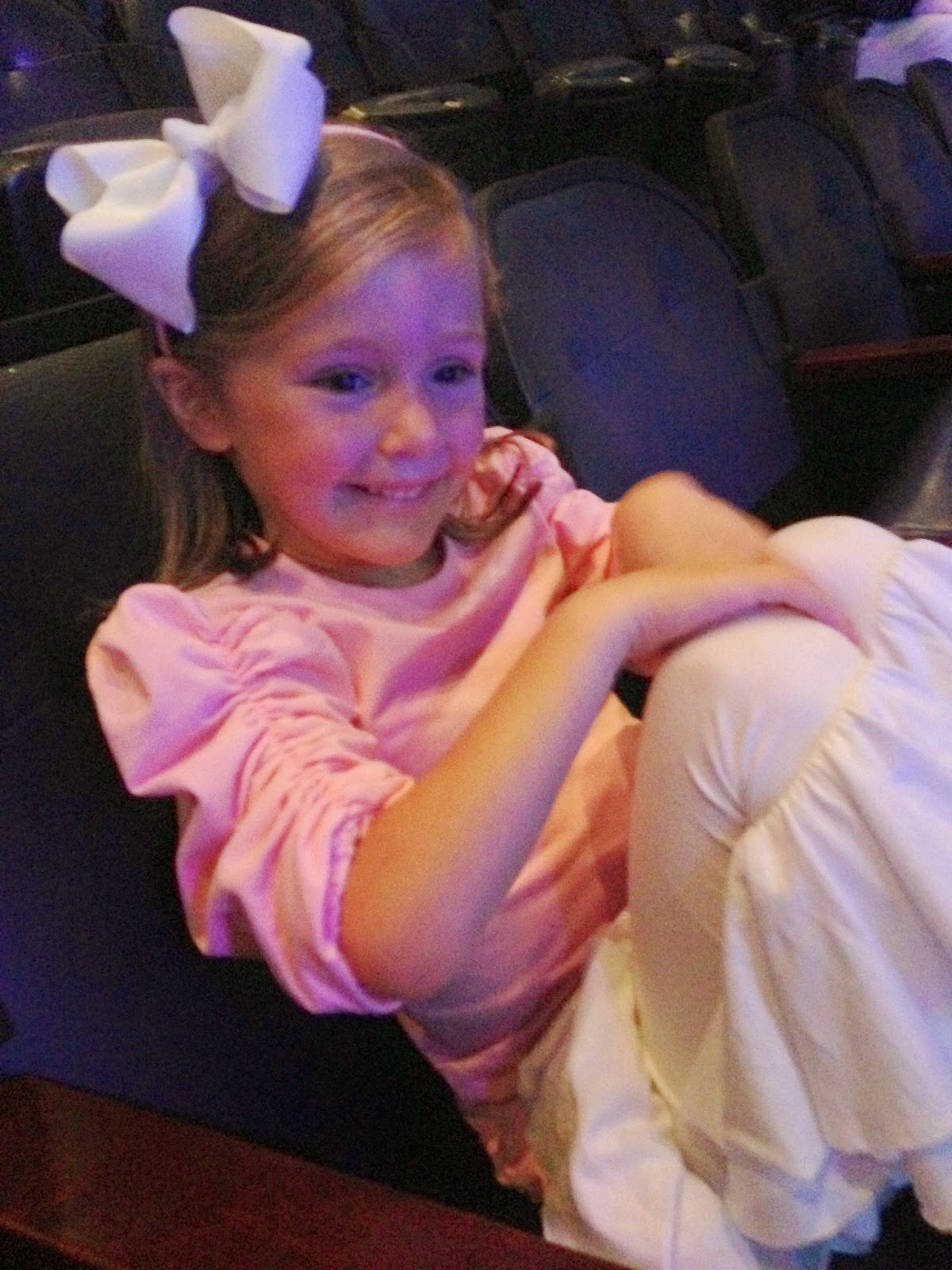 My favorite part of the experience was watching her, full of wonder and awe, watch the show. It was her first of the sort and she loved it. As she does every time we watch the movie, she sang along. She also belted out “Let the storm rage onnnnnn!” You probably know the ending of Elsa’s “Let it Go”. 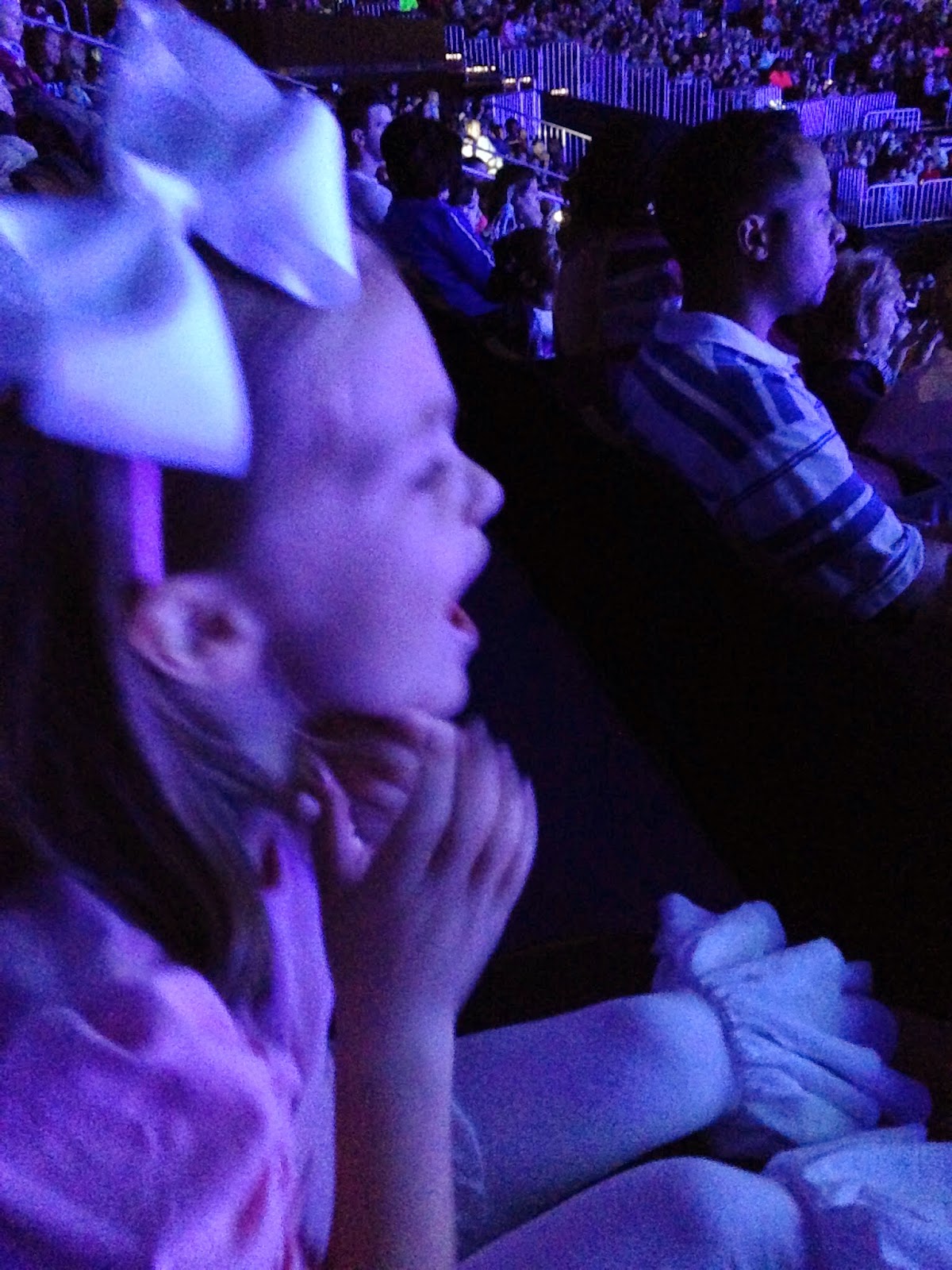 I’m not sure if she was unaware or just unconcerned with the fact that she was singing very loud. I’m sure there were a few other little girls in the audience doing the same thing. The lady in front of her enjoyed it, though. 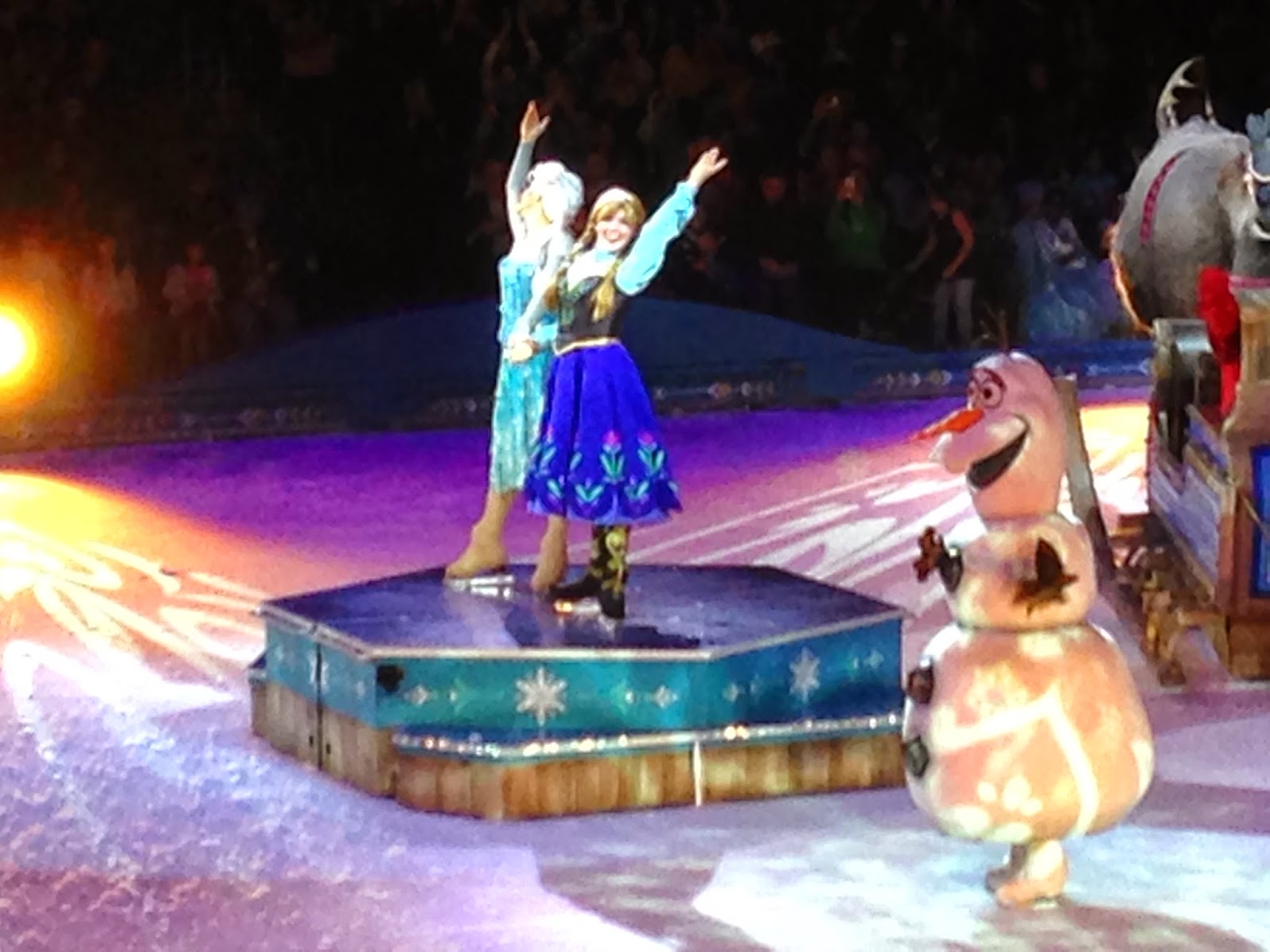 It was a great show. Looking forward to more Disney on Ice events in our future!

We stayed at the Hilton downtown amidst Chicago Bear country. The Bears were playing the Falcons on Sunday and, apparently, it was the team hotel. Lots of orange and blue. Hannah and Joseph were most excited about the elevators – that were on the outside of the building and ascended very fast. They might’ve fought over who was going to push the buttons a time or two.

This is when the trip went downhill.

Joseph did not sleep well and woke up again and again with stomach cramps. He got sick at breakfast Saturday morning and was miserable most of the day. We went to the Tech game with the intention of leaving at halftime. Joseph mostly just wanted to be held.

Hannah, dressed in her fancy new GT outfit, was ready to cheer on the Jackets. 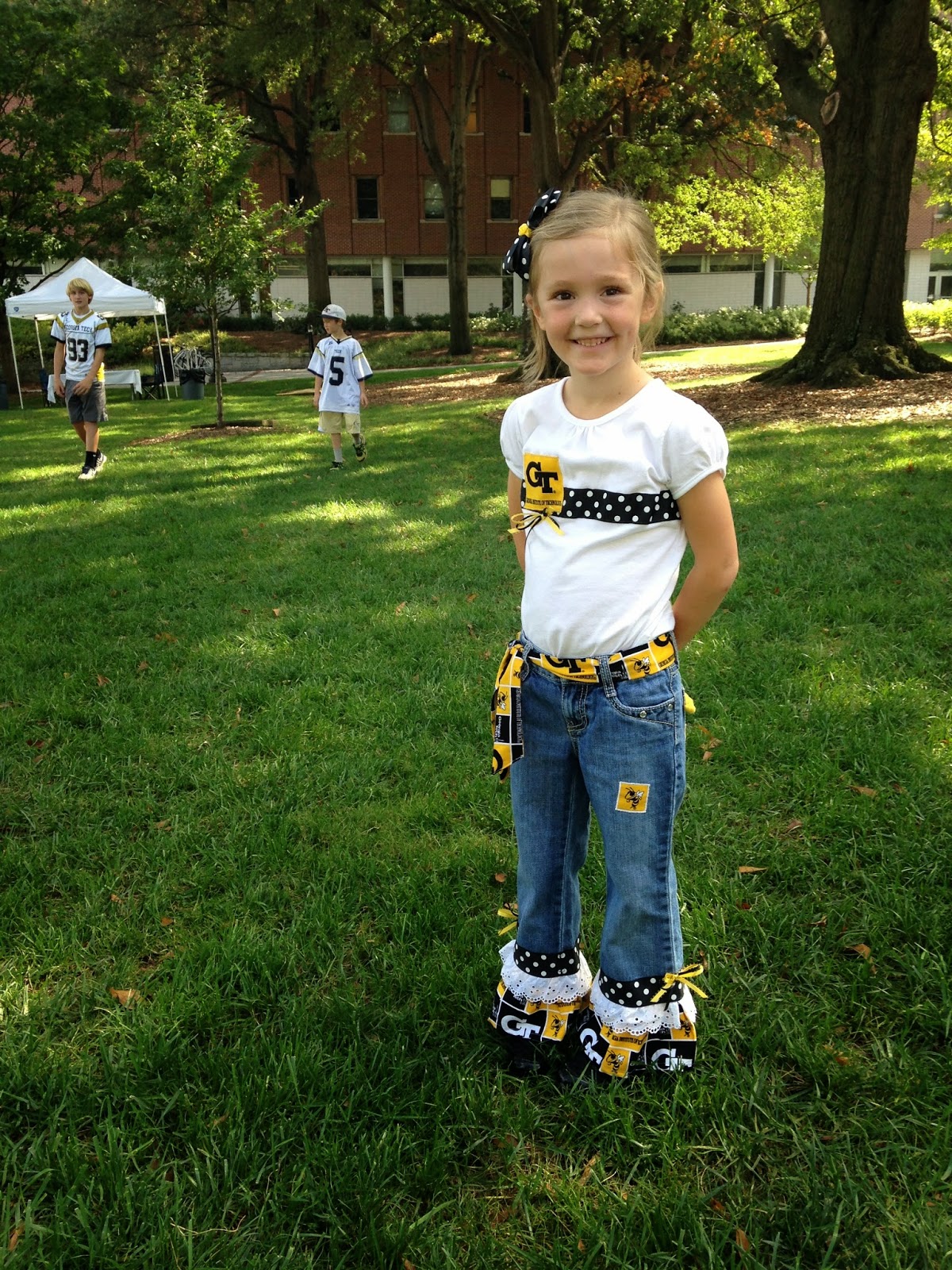 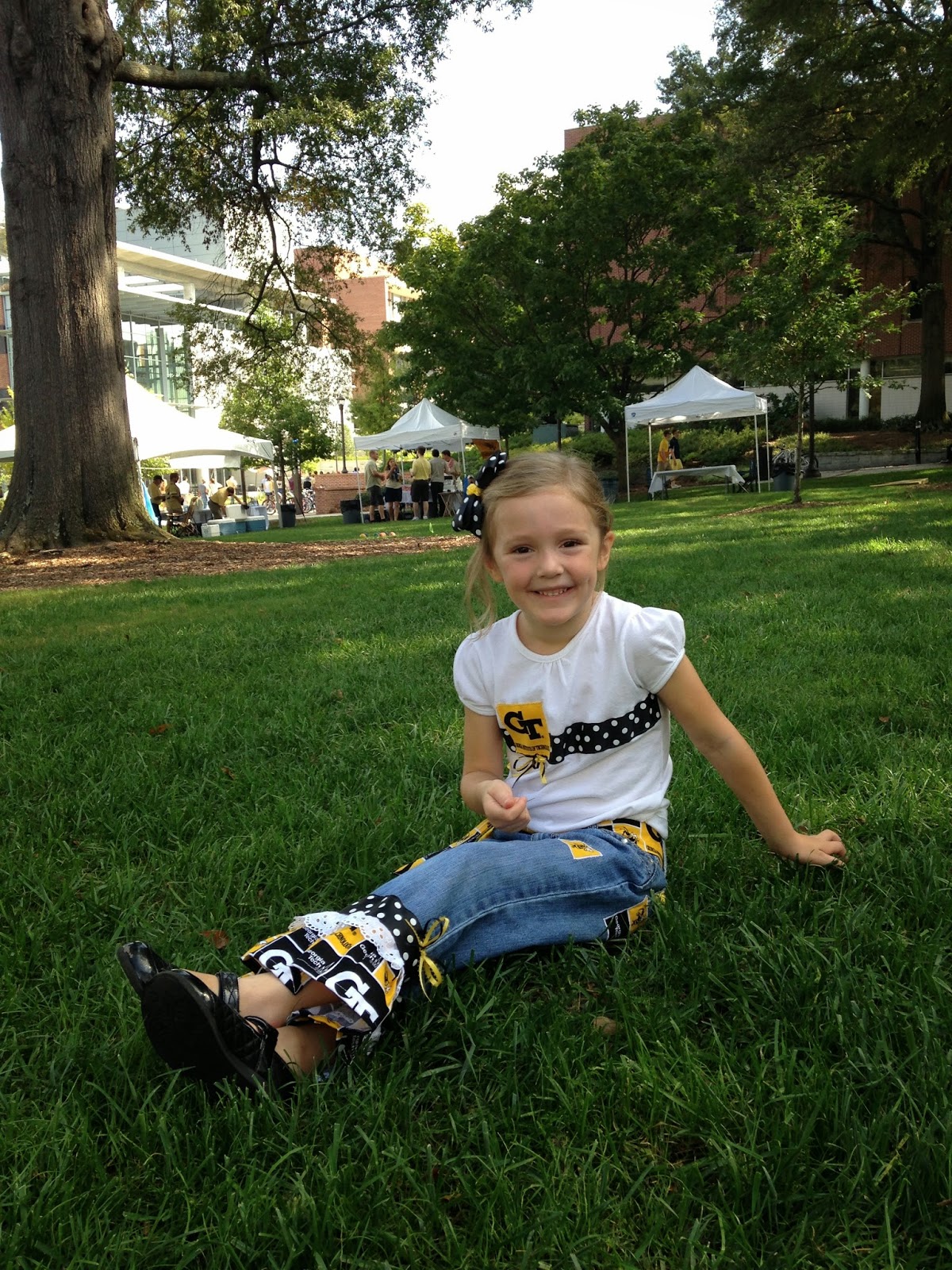 But when we got to the game it was a different story. It was sunny and hot. Sunnier and hotter than the forecast said it was going to be. We sun screened the kids and sat, sweating in the heat, until they couldn’t take any more. It wasn’t half-way through the first quarter.

I left Joe to watch the game (our seats were really good) and listened to whining and crying underneath. It became ridiculous. My view: 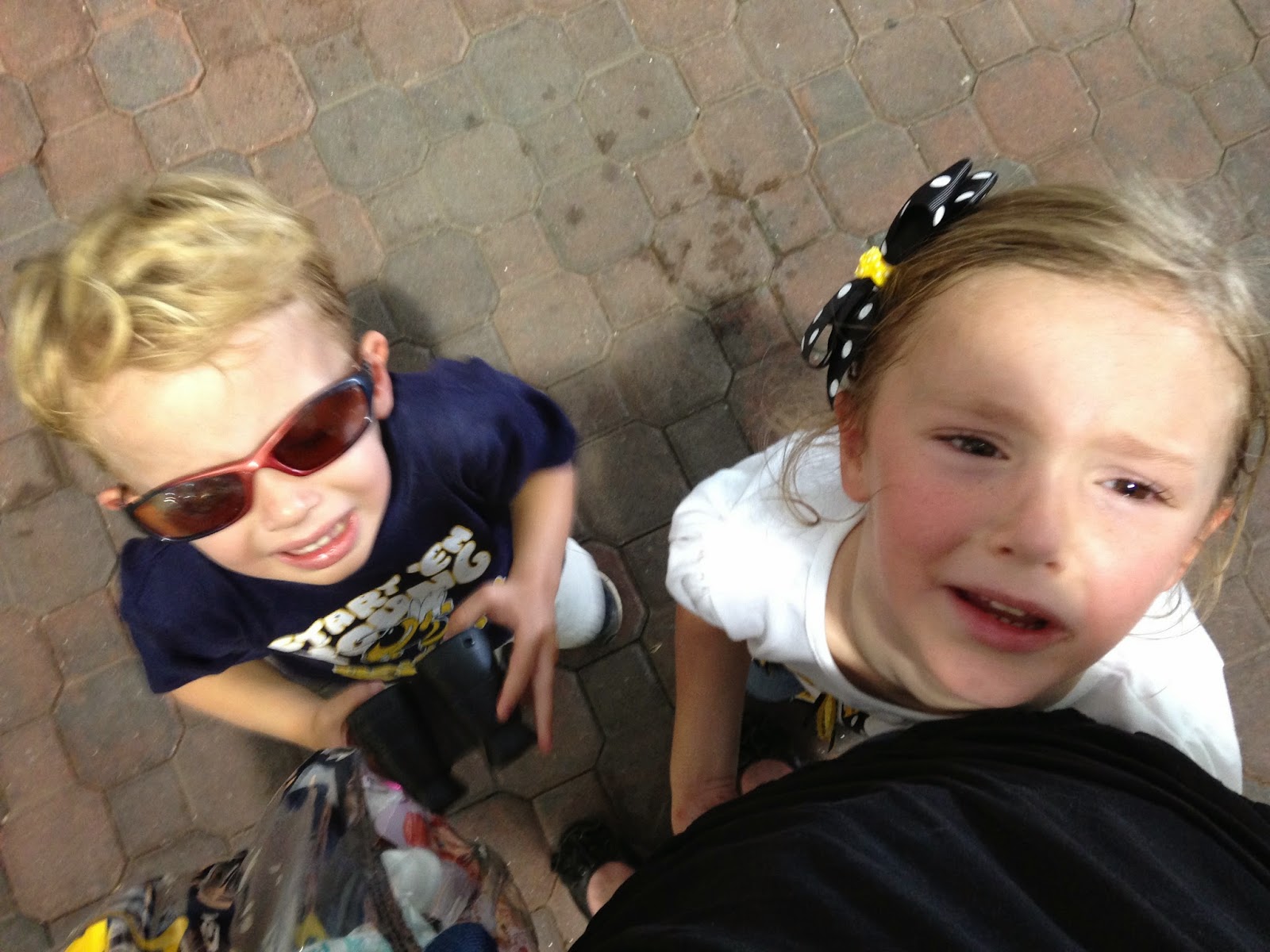 I sat against the concrete wall in the concourse, watching the TV screens. Hannah calmed down and Joseph crashed in my arms. I figured maybe I could carry my sleeping child and get to watch the rest of the first half with him asleep. And I did!

And, thankfully, we got some cloud cover and it wasn’t so brutal. Hannah rallied and had a good time. Joseph woke up just before the clock expired at the half. We decided to call it a day and headed for the car. We were almost there when the sky opened up. Rain, rain, and more rain. Seriously, we go from sun screen and sweat to being soaked in the rain.

We ate lunch at Moe’s just off campus before driving home. This little guy crashed again almost as soon as we sat down. 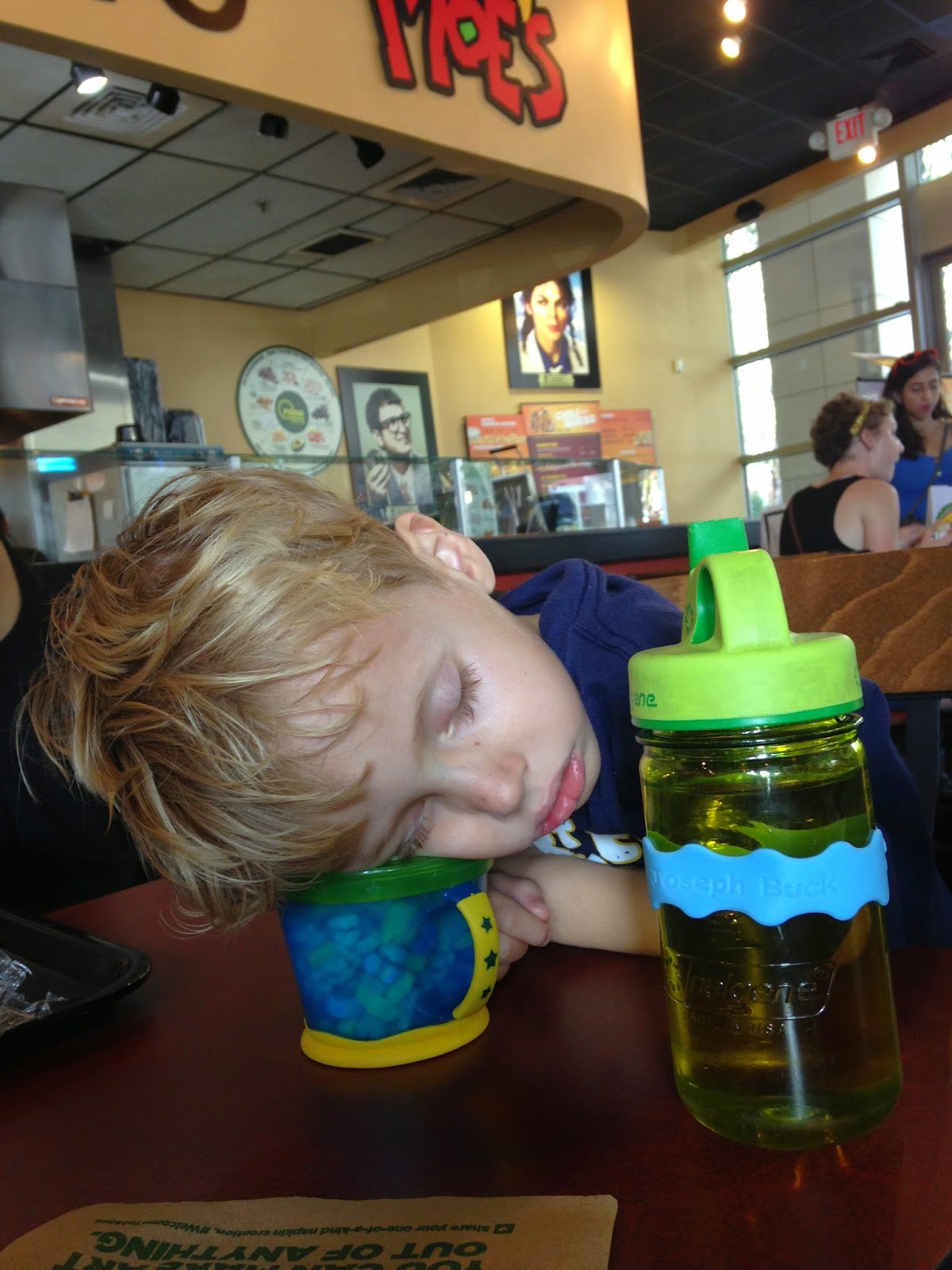 On his snack cup of yucky charms.

He slept almost the entire way home… Hannah got carsick…

But we made it home safe and sound. And we got to spend time together. And Frozen was fun.

Today is our anniversary. Look at us then… 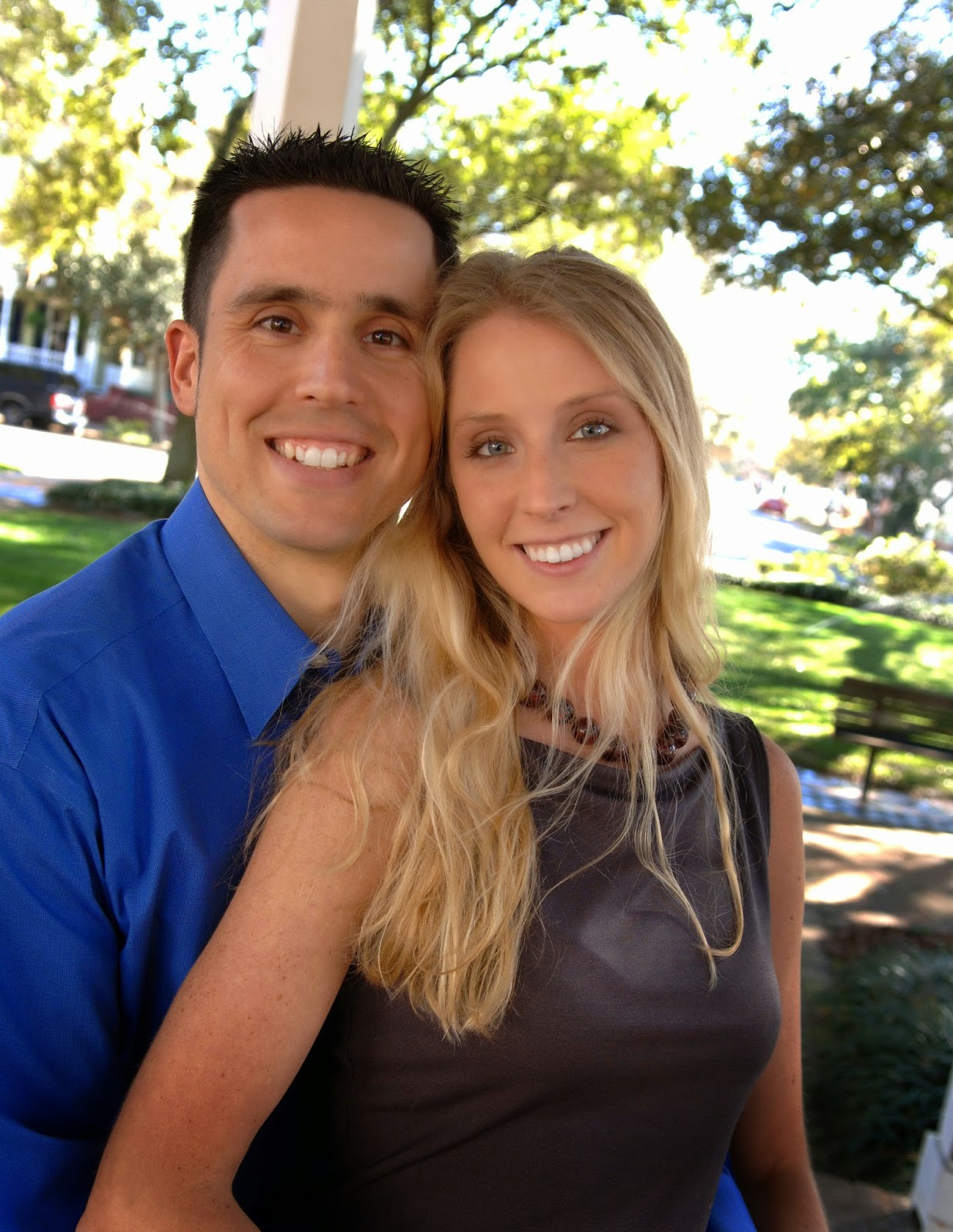 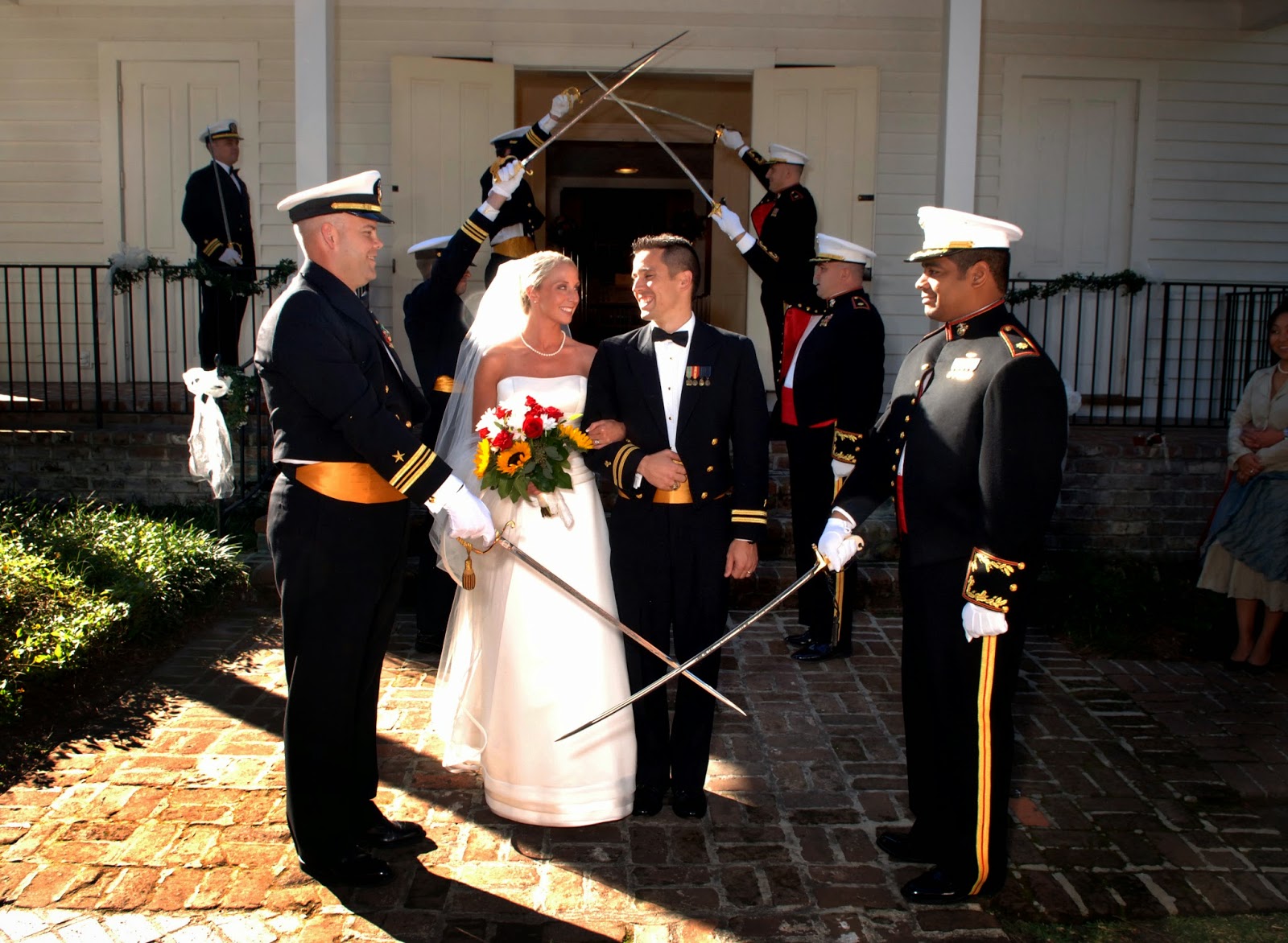 What a ride it’s been. Happy anniversary Joseph Alexander Buck, IV! I love you forever.

« the georgia national fair
bronze…for me »